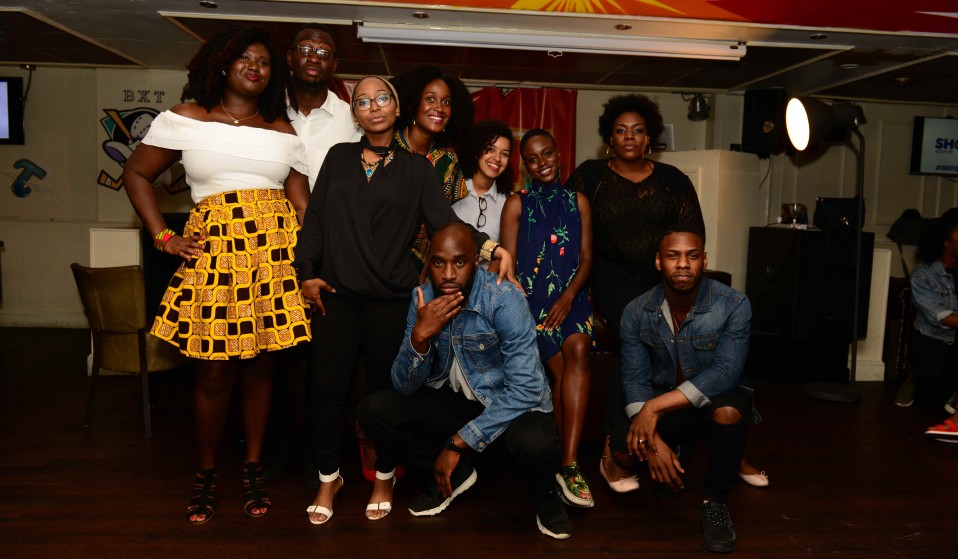 African-American podcasting has long been making waves on the other side of the pond. Now a new wave of Black British podcasts are shaking up the UK’s white-dominated media.

African-American podcasting has long been making waves on the other side of the pond. Now a new wave of Black British podcasts are shaking up the UK’s white-dominated media. Black listeners in the UK finally have homegrown podcasts that truly reflect and cater to them, and don't have to look in other places for that representation.

The global popularity of podcasts has skyrocketed in recent years, and really it’s no surprise. Podcasts are an easy way to consume information and provide more intimacy than the written word can. Listening to real voices, with minimal edits, allows connections to develop quickly and easily between the host and listener.

Successful American podcasts like Serial and This American Life have dominated the headlines and iTunes charts, but Britain has a thriving pool of podcasting talent that extends beyond big corporations and media conglomerates. While discussions about the embarrassing lack of media diversity in the UK continue, the last couple of years has seen a steady growth of black British podcasts.

“People are just tired of having to listen to other people’s opinions on things they care about, so they picked up their laptop and microphone and started talking about it,” says Imriel Morgan, co-founder and CEO of the ShoutOut Network.

The ShoutOut Network produces quality podcasts that cater to diverse audiences. Unlike companies and platforms that routinely pay lip service to the issue of diversity, the ShoutOut Network is actively doing something about it, by creating the content that they want to see and hear. The aim of the network is to give millennials from underrepresented backgrounds a platform to express themselves.

According to Skillset’s 2012 Employment Census of the Creative Media Industries, just 5.4 per cent of the media workforce are from ethnic minority backgrounds, which is nowhere near reflective of our society.

The network’s flagship show, Melanin Millennials, which Imriel co-hosts with Satia Stark launched in December 2015. Today the network produces five shows in total: Melanin Millennials, Mostly Lit, Two Fools Talking,Unarchived and Artistic State of Mind. They all focus on a range of topics including literature, pop culture, history, philosophy and the arts.

Although the number of black British podcasts is growing gradually, America’s black podcast presence is stronger and more established. Shows such as The Read, Black Girls Talking and Call Your Girlfriend are just a few examples of podcasts that have found enormous success.

“The movement in America is doing so well, a lot of American shows have audiences over here and do live shows in the UK. There’s nothing here in the UK that matches that, so we thought, let’s see what happens if we try to do it ourselves,” Imriel says.

Imriel admits that she didn’t initially recognise how popular podcasts were when she was setting up the ShoutOut Network, but founder Efe Jerome decided podcasts were the way to go due to their accessibility and relatively low cost. “The podcast format just lends itself to a really easy experience. We have invested in a lot of equipment to make sure we sound great but generally, the point of entry is pretty low,” says Imriel.

Making podcasts might be easy, but what about making economically self-sufficient podcasts? The podcast listenership is still rapidly growing, and it’s clear that there’s serious money to be made from this platform, especially through advertising and sponsorship.

Currently, the ShoutOut Network doesn’t make a profit, but the team is exploring different revenue streams. It has racked up an impressive 25,000 listeners across all its shows but it’s not enough to attract big advertisers, so for now they are running affiliate advertising. “I’m targeting black-owned businesses that have products that cater to our demographic. We’re going to try different ways of monetising the shows. Our workload will increase as we grow, so it has to be somewhat self-sufficient,” Imriel explains.

ShoutOut also wants to secure funding to support disadvantaged young people who want to work in media, by helping them to develop skills in audio engineering, hosting and marketing.

In recent years, podcasts have become an exciting new outlet for young black British people to express themselves and the launch of the ShoutOut Network will give the UK podcast scene a welcome boost.

“I think for a lot of the black podcasters, it’s just a nice way to talk about things they care about. A lot of us aren’t in it to make money. ShoutOut doesn’t exist to make money, it’s about giving people a platform to express themselves,” explains Imriel.

Frustration and dissatisfaction with mainstream media representation (or lack thereof) of their communities is often a motivating factor. Naomi Simon started 20Something Podcast two years ago while still at university. She wanted to discuss social political issues concerning African and Caribbean communities in the UK. “I think podcasts give us as black British young people a voice that hasn’t been heard through other mediums. I think more young black British people becoming podcasters is a positive thing,” she reflects. Last year, Naomi relaunched 20Something Podcast and has plans for it to become a multi-faceted media platform.

The authenticity and simplicity of podcasts make them a great way for black British people to get their voices heard, according to BLANGUAGE hosts Iman Xashi and Daniel Arthur. The two friends started their podcast BLANGUAGE, which is named after Young Thug’s 2014 song of the same name, to reflect on their experiences as young black Londoners.

“There’s not a lot of leverage in how you can interpret a podcast. It kind of just is what it is,” says Iman. The myriad of topics explored on black British podcasts highlights the diversity of black British people. Our perspectives and experiences aren’t a monolith. “Although you’ve got a surge of black podcasts coming up in the UK, we’ve all got similar but slightly different perspectives of our lifestyles,” suggests Daniel.  “We can just give you our own narratives.”

Black British podcasts are thriving and helping to bring much-needed discussions directly to our headphones. Too often, the term “diversity” is nothing more than a hollow buzzword, but young black Brits aren’t sitting back passively and waiting for change. They are doing it themselves. They are telling their own stories and producing entertaining, inspiring and intellectually stimulating content for hungry, loyal audiences. As these voices get louder in the world of podcasts, it’s only a matter of time before thousands more are tuning in.

To listen to ShoutOut Network’s podcasts, head over to their website.

Linkedin
RELATED ARTICLES
OTHER ARTICLES
Zsófia Sivák’s ongoing project documents the country’s tavern culture, preserving a once defining part of rural life.
After fleeing the war in Ukraine, people are finding it impossible to secure affordable and decent housing in the UK.
A group of aid workers face prison for helping to save people fleeing their homes at sea. If they are charged, it will have a chilling effect on humanitarian efforts.
A new podcast is opening up the conversation between trans women and trans amorous men in the hope of building coalitions.
A new film from Berghaus traces the story of Adam Raja, who left behind a turbulent upbringing to discover the healing power of climbing.
Activists and campaigners are fighting back against new laws that would seriously undermine the ability to take industrial action, calling it an attack on fundamental workers' rights.