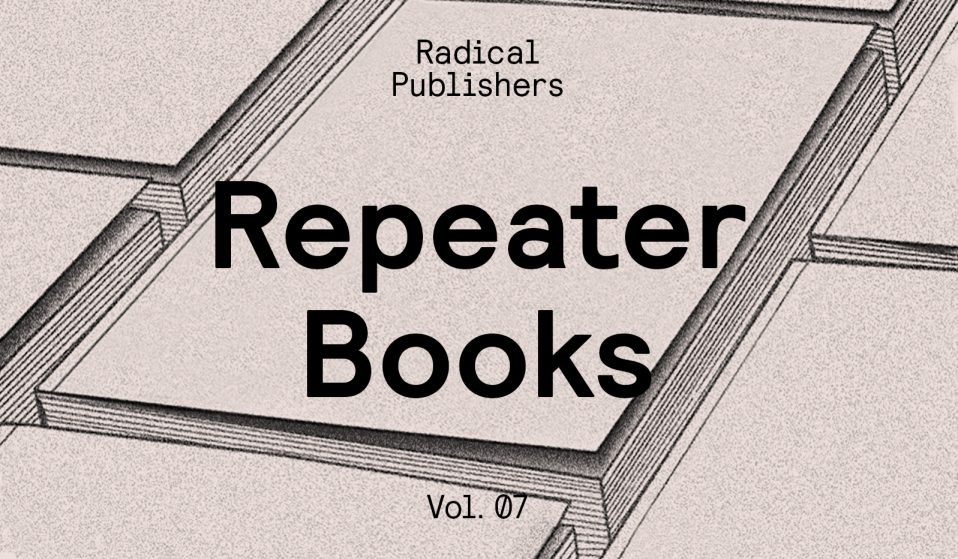 Described as the ‘the love child of Verso and Faber’, Repeater Books is an exciting new voice in left-wing literature – revolutionising the tired world of cultural theory and criticism.

Described as the ‘the love child of Verso and Faber’, Repeater Books is an exciting new voice in left-wing literature – revolutionising the tired world of cultural theory and criticism.

“From the ashes a fire shall be woken, A light from the shadows shall spring.”

Thus spoke JRR Tolkien. I think he was talking about elves or something. However, these words also serve as a perfect allegory for Repeater Books, a publishing imprint that came to life in 2014 from remains of a radical press inferno.

Repeater is described by their publicist Tamar Shlaim as ‘the love child of Verso and Faber’ – and their list is eclectic enough to justify that claim. From Carl Neville’s extraordinary dystopian novel on British employment culture, Resolution Way, to Under My Thumb: Songs that hate women, and the women who love them – a wonderfully candid book edited by Eli Davies and Rhian E Jones, Repeater publish radical texts that are very often popular and accessible.

Repeater was founded by Mark Fisher, Tariq Goddard and Tamar Shlaim after a bitter dispute with the parent company of Zer0 books – a heavily influential press Fisher and Goddard founded in 2009. But Repeater isn’t simply a continuation of Zer0’s work. Now, it has expanded its remit away from just cultural theory to fiction, sports writing and much more.

Zer0’s most famous book is probably Mark Fisher’s Capitalist Realism. Sadly, last year Mark, who battled recurring depression, took his own life. It’s hard to underestimate the impact Fisher has had on popularising cultural theory – particularly on the left. As a tribute to his memory, Repeater will be publishing k-punk: The Collected and Unpublished Writings of Mark Fisher (2004-2016) in November.

I ask Tariq what he thinks of Mark’s legacy: “To take every part of culture and life as seriously as you would the most convoluted problems of philosophy, bringing the same rigour and analysis to a football match or theme park as you might the French Revolution or Marx, and to not be afraid to make the right connections, however surprising or improbable they may be. This goes hand in glove with Mark’s antipathy to being embarrassed into pretending popular culture isn’t worth analysing.”

What Repeater do that few other radical publishers do is books with a proper sense of humour. The radical left is not known for its great gags and this can be off-putting to a lot of people who might otherwise sympathise and agree with its arguments. A reputation for po-faced, dry Marxist ideology and speeches that only benefit the speaker dogs the radical left – even if these days most of these elements are muted. No one likes a bore, and a political bore is the worst of the lot. Repeater does humour well, much like Fisher did in his writings. They do political and cultural theory with a tongue often lodge firmly in the cheek and for that, radical readers should be grateful.

As a radical publishing outfit, Repeater has taken criticism to a new level, while finding a business model that puts them in charge. A ‘repeater’ is an electronic device that receives a signal and retransmits it. Repeaters are used to extend transmissions so that the signal can cover longer distances or be received on the other side of an obstruction. In other words, a signal booster. What Repeater Books are doing is signal boosting radical writing, pushing ideas as far as they can and having fun while they’re doing it. 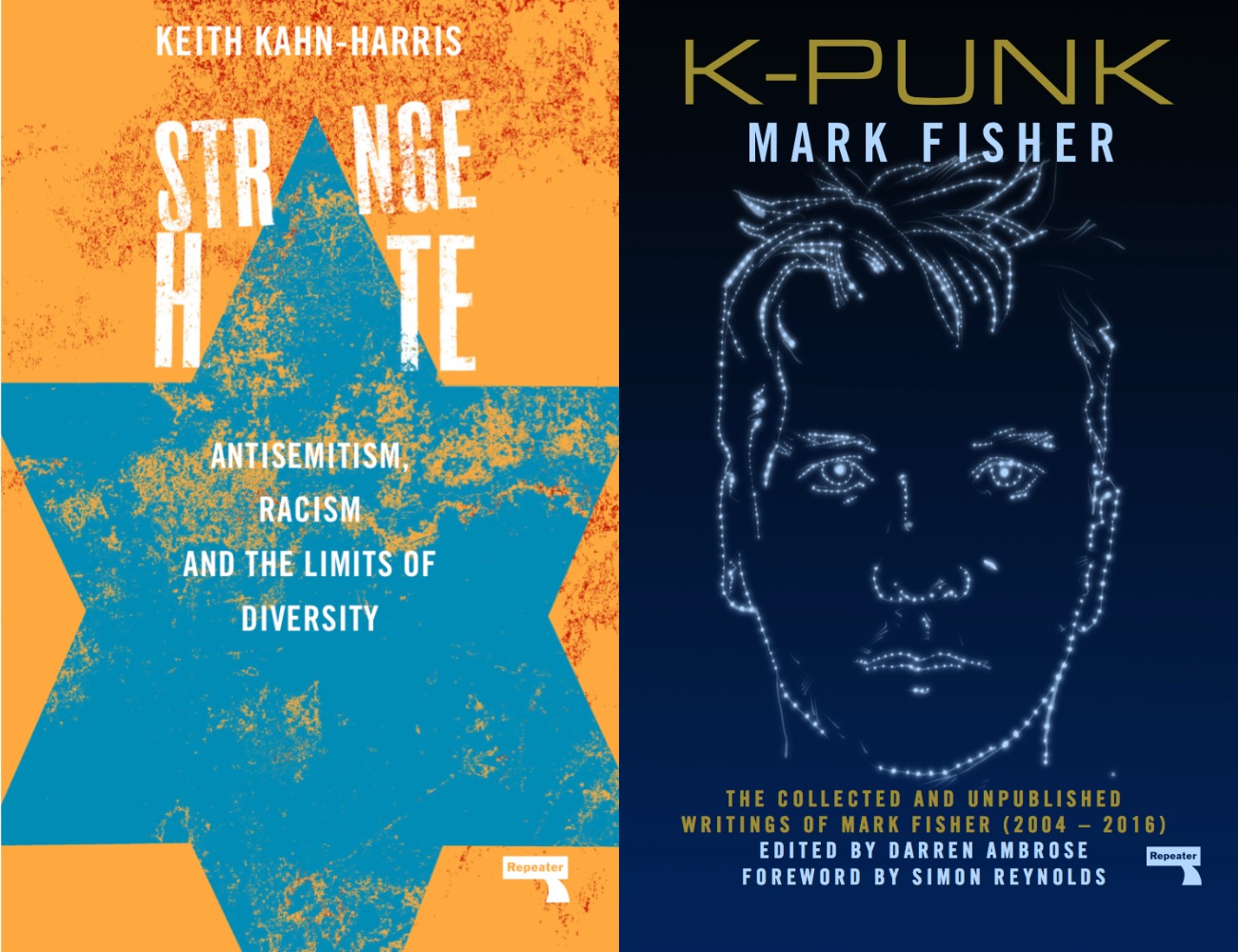 Criminally underrated novel that takes in rave culture, ranges from Deptford to Margate, and explores dystopian working practices, affective labour, ghosts of the past, undercover cops, violence, betrayal and so much more. I can’t recommend this book enough.

Lean Out by Dawn Foster

Foster unpicks how the purportedly feminist message of Sheryl Sandberg’s business advice book Lean In neatly forgets to address patriarchy, capitalism and business in the lives of women in modern life. Delving into “1% feminism”, Foster argues that feminism has been defanged and depoliticised at a time when women have borne the brunt of the financial crash and the gap between rich and poor is widening faster than ever.

As previously mentioned, a humungous book of the late Mark Fisher’s writing, from his k-punk blog entries to unpublished, never-read-before essays. A doorstopper of excellent cultural theory.

Strange Hate: Antisemitism, Racism and the limits of Diversity by Keith Kahn Harris

Harris explores the current discourse around anti-semitism, and argues that, in a diverse society, anti-racism cannot be selective, even when that means defending our political enemies. Necessary and very now.

Learn more about Repeater Books on the house’s official website.

Linkedin
RELATED ARTICLES
OTHER ARTICLES
Cindy Campbell recounts how her brother ushered in a new era of musical culture at a party she held in the Bronx in ‘70s.
Financial turmoil is pushing people who work in the sex industry into more dangerous and desperate situations as a means of survival.
The idea that a younger generation is abandoning work has become a popular narrative online, but it doesn’t necessarily reflect reality.
The two-day long event returned to London this year, showcasing a spectacular parade, steel bands and Caribbean food.
As the Scottish government announces a rent freeze, an activist with Living Rent who fought and won shares how they did it, and what must come next.
By turning a real-life crisis into daytime television fodder, TV bosses have once again shown themselves to be completely out of touch with audiences.