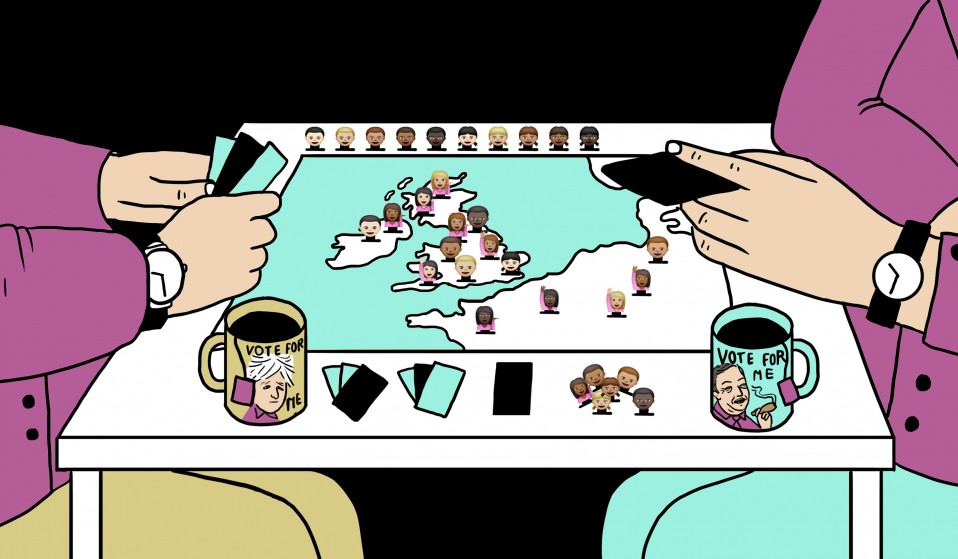 As the UK votes to leave the European Union, the population is left to face a hard truth. This campaign was fuelled by a resentful white nationalism - the roots of which run deep.

As the UK votes to leave the European Union, the population is left to face a hard truth. This campaign was fuelled by a resentful white nationalism - the roots of which run deep. But what happens when the manipulated masses don't "get back" the country they were promised all along?

We did it, Nigel Farage claimed, basking in his new dawn, ‘without a single bullet being fired’. Pedantically, he is correct; Jo Cox, a committed left-wing, pro-migrant internationalist MP was shot several times by Thomas Mair, a long-time fascist activist. A week, it seems, remains a long time in politics, even one book-ended by political assassination and a vote for ‘Independence Day’. What began as David Cameron’s political sop to the ‘Eurosceptic’ wing of the Tory party appeared to meander along for ages before intensifying, through political calculation and media opportunism, into a gleeful racist shit storm. The end of the beginning concludes with the far-right emboldened enough to ‘purge a traitor’, and ‘migrants’ and British-born minorities wondering what happens next with a resentful white nationalism that, as a condition of its invoking, can never get its country back fully or completely enough.

It is a common liberal complaint that people never seem to weigh up the evidence and vote rationally on the precise referendum question put before them. What this misses is the role of referenda as political prisms that refract a tangle of agendas, desires and alternate rationales, and that accrue opportunistic, expressive force in the broadly ‘post-democratic’ conditions prevailing today. The Brexit campaign understood this, and in the shadow of the European Union’s border crisis and the securitarian obsessions of modern states, tied EU membership to immigration, and immigration to a knot of socio-economic insecurities and cultural anxieties that require political transformation but that can always be symbolically worked through on the lives of migrants and ‘migrant-looking’ people.

In too many responses today, the apparent success of this strategy is taken as an opportunity to denounce those who voted for Brexit as racists, as little more than a working class mob proving, once again, how they can’t really be trusted with democracy. Beyond this condescension, there is really little or no point, as some have done, trying to sift the Leave vote into discrete, moralistic categories of ‘Racists’ and ‘Others’, as if desires and motivations can be understood this way.

As Paul Mason wrote, it is very clear that the referendum provided the opportunity, in a country of resilient and deepening class and regional inequality, to say “enough bleakness, enough ruined high streets, enough minimum wage jobs, and enough lies and fearmongering from the political class”. That this anti-establishment impulse was in effect captured by Nigel Farage, Michael Gove and Boris Johnson – a smirking establishment troika fully committed to further austerity as a project of class supremacy – does not invalidate this, but points instead to what has long been seen as a gathering crisis of democratic representation.

“The tendency to ignore what people who experience racism have to say about the experience of racism has been all too present, in progressive circles”

A rejection of elitist pearl-clutching, however, must be accompanied by a reckoning with the consequences of a referendum whose dominant mode of mobilization was a full-throated racist-nationalism. The imperative to ‘take our country back’ is an active invitation to a white nation to imagine itself becoming great again by solving the problem of immigration and its problem populations. There is no point, as David Wearing argues, pretending that this does not have an affective force:  “The disproportionately white Anglo-Saxon residents of Westminster and Fleet Street may find this hard to believe, but Britain has a rich and well established tradition of racism and xenophobia. The idea that these feelings might be widespread, rather than marginal, is only discounted by those who have never been subjected to them first hand”.

The tendency to ignore what people who experience racism have to say about the experience of racism has been all too present, in progressive circles, in the tin ear extended to EU and non-EU citizens and racialized minorities who expressed how profoundly unsettling and at times frightening they found the last weeks of campaigning. And now the issue is this. The bewilderingly complex negotiations for Brexit will take years, a timetable in real tension with the imaginative timeline that ‘solving immigration’ proposes. The consequences of this are deeply frightening for the people who will pay the price for neoliberal desolation and post-democratic dislocation being presented as fixable through ‘taking our country back’: what happens when nothing much changes, and you’re still here, still taking our country when we asked nicely, the first time, for it back?

The response to this can only be a popular anti-racist mobilisation that defends the lived realities of multiculturalism in Britain. Firstly, the cross-party rhetoric that now promises to respect the anti-immigration vote of a ‘white working class’ – as pronounced among pro-Remain Labour as the ‘Leave’ contingent – must be contested. In British politics, the ‘white working class’ is not a sociological description but an ideological appeal that whitewashes Britain’s social realities and is consciously designed to deter solidarities. Secondly, the free movement of people must be defended now, and conspicuously – as a condition of human emancipation, and as the condition on which so many people from other EU countries have made their lives in Britain.

Thirdly, opposing the racism of a nationalist withdrawal must be integrated into opposition to the racism of the European Union’s deadly border games. When Turkish border guards shoot dead Syrian refugees, they are doing so in the name of the European values that liberal leaders such as Poland’s Donald Tusk, and Finland’s Sauli Niinistö, have said cannot survive the ‘influx’ of refugees. Ignoring the undemocratic, neoliberal authoritarianism of the European Union is not an option, as this must be linked to the resurgence of a transnationally connected far-right that will seek to use Brexit as an intensifying event, as the Front National’s Marine le Pen and the Dutch Freedom Party’s Geert Wilders indicated today.

Across Europe, a nexus of contingently democratic radical right parties and violent street movements offer, like the Brexit right, the fantasy communalism of resentful nationalism and cultural purity as a solution to the economic inequality and social dislocation the European Union has done so much to deepen. But there is hope to be found, for example in the overwhelmingly youthful rejection of this version of Brexit among the 48% of Remain voters, and the urgency with which so many have greeted the fact that it is their country, after all, that is also being taken away.

Gavan Titley is a lecturer in the Department of Media Studies, Maynooth University, and the author, with Alana Lentin, of The Crises of Multiculturalism: Racism in a Neoliberal Age (Zed Books 2011)

Linkedin
RELATED ARTICLES
OTHER ARTICLES
Former teacher Alan Moss recalls photographing Hughes-Quinn Junior High – a school in a troubled area with an often misunderstood student body.
Priti Patel’s new Immigration Bill will resemble the worst part’s of Australia policy, inflicting the same suffering, merely under a Union Jack.
In the wake of the pandemic, marginalised individuals are reclaiming their relationship with natural spaces and discovering the power of the outdoors
As skateboarding embraces a more conventional status as an Olympic sport, four skaters reflect on what happens to a subculture when it’s thrust into the mainstream.
Jamaica is the latest Caribbean country to demand slavery reparations, but awarding this sum will be fruitless unless the UK is forced to address to dismantle its racist structures.
Sophia Spring discusses her project documenting the new found appreciation among Londoners towards the city’s green spaces during lockdown.