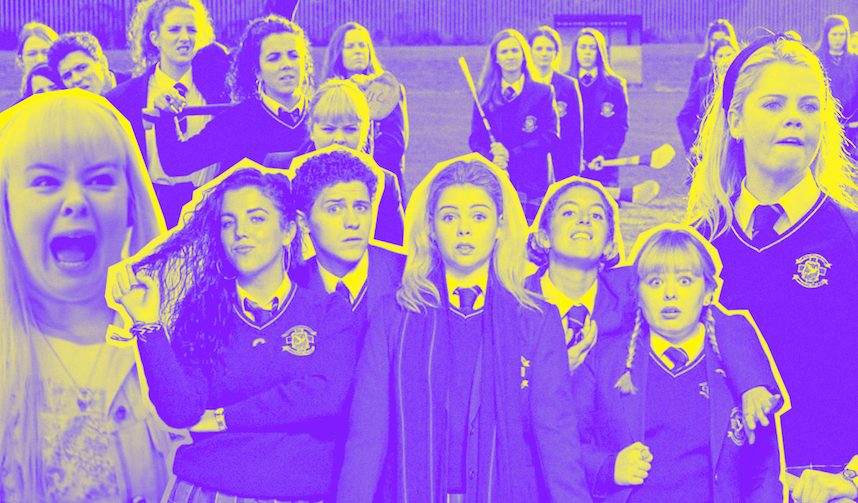 As Lisa McGee’s beloved sitcom approaches its final episode, writer Seaneen Molloy reflects on how the show sought to give an honest portrayal of teenagehood during the Troubles.

As Lisa McGee’s beloved sitcom approaches its final episode, writer Seaneen Molloy reflects on how the show sought to give an honest portrayal of teenagehood during the Troubles in the ‘90s.

I remember when I first saw Derry Girls. I almost didn’t watch it at all; every English friend I had was messaging me with a link to the trailer. I didn’t want to waste my time watching yet another programme about the Troubles focusing on haunted-looking men with actorly attempts at our accent that made me cringe.

But to shut my friends up, I gave it a go, and found a show in which, for the first time ever, I completely recognised my own life and experiences. I knew these girls. I am these girls.  Pretentious, self-conscious Erin (played by Saoirse-Monica Jackson). Hyper-anxious Clare (played by Nicola Mary Coughlan). Confident, catty Michelle (played by Jamie-Lee O’Donnell). Space cadet Orla (played by ​​Louisa Clare Harland). And of course, Michelle’s cousin James (played by Dylan Llewellyn) – a character who embodied the “English fella” that everyone knew and who was viewed by girls, like me, with a mixture of derision and naked adolescent lust. Even Sister Michael, the sarcastic headteacher of the Derry girls’ convent school played by Siobhán McSweeney, was a mixture of the procession of nuns who taught me in my own school.

I’m 36 and from a Republican council estate in West Belfast in Northern Ireland. I never heard my accent on TV growing up, except badly dubbed attempts when Gerry Adams was on TV.

Despite where I’m from, I was always fascinated by the English. Even by the English soldiers who sat with guns outside our house. Mostly young, they’d let you look through the sights, though you’d have to bolt when your mum came outside. When their armoured trucks rolled into our estate, all the kids would line up on both sides and then run into the middle of the road pretending to fight. It was something to do. A wee act of rebellion.

I had loads of English penpals as a teenager (I eventually married one of them). To me, they were impossibly glamorous. They didn’t live on our little island. They didn’t have curfews and soldiers in their streets. They were able to go and watch bands who weren’t just local fellas (the Take That concert in Derry Girls had legendary status among girls in Northern Ireland, including my sisters who attended much to my nine-year-old self’s annoyance).

What I didn’t know was how the English viewed us. I went to visit one of my penpals in Manchester when I was 15. When I was on the train, a drunk man heard my accent. He started saying I was in the IRA. He said I was throwing bottles at kids (he was referencing Holy Cross, which was a Catholic school. Getting us mixed up. As you all do). He assaulted me and I had to get off the train. I was furious, confused and heartbroken. It was the first time I’d been assaulted for being Northern Irish, but not the last.

I’ve never felt like I’m a real person to people in the UK. I moved to London when I was 17 and a temp agency told me to change my name to something easier to pronounce. People would crack I was in the IRA and cover their kneecaps and I’d have to smile. My boss at work called me Bridget and I would have to answer. We were just across the water and nobody knew anything about Northern Ireland. When I tried to find a home in the London Irish centres where third-generation people romanticised being Irish, ‘really’ Irish, they’d add that of course, I wasn’t. I was seen as childish, and part of a childish conflict.

When I shared these thoughts on Twitter, Fermanagh Girls, Omagh Girls, South Armagh Girls, County Down Girls from both sides shared their experience of prejudice and dismissal – not just from people in the UK, but also from the South of Ireland. Being asked if they owned a gun. Being held personally responsible for the violence. In a pub in London, I found myself apologising for the Warrington bombing, despite the fact that I was eight at the time.

Not that I was a stranger to bombings. I went to school on the Falls Road in Belfast. Bomb scares happened every other week. A bomb scare meant a free period in the study hall with the doors locked or, if you were lucky, instantly being sent home. It was class.

What we did in each other’s bedrooms while this all went on was what the Derry girls did. Pretended to be Spice Girls. Talked about how we could look cool in front of boys. My friend’s mum had a framed photo of Mel Gibson under her Padre Pio. The green and brown kitchen. A full and ordinary life among it all.

One of the most famous Derry Girls episodes is the farcical school trip where our convent-educated protagonists are exhorted to bond with Protestant boys. In it, the dreamy Father Peter (played by Peter Campion) tells the mixed group of Catholic girls and Protestant boys to write down on a blackboard what they have in common and what their differences are. Suffice to say, this attempt to find similarities across the barricades backfires. So famous is the blackboard – annotated with differences like, “Catholics love incense/Protestants love brooches” – that it’s displayed in the Ulster Museum in Belfast.

What many people in the UK don’t realise is that this is actually based on a real thing – the EMU (Education for Mutual Understanding and Cultural Heritage) project. These were trips that similarly convent-educated girls like me were sent on in order to discover that Protestants were ‘just like us’. Across Northern Ireland, you’ll hear tales of those trips. Lots of us had our first kisses on those trips (not me though).

The blackboard was funny (though I will give Protestants this: their traybakes are just better than ours). But what made me convulse with laughter, for hours afterwards, was Clare’s outburst. Mistakenly believing that a hearing-impaired Protestant boy was plotting to kill them, she screamed, “You jaffa bastard!”

It’s not that sectarianism is hilarious (‘jaffa’ is slang for orange, shorthand for Protestant). But what made me roar with laughter in recognition was the sense of sheer pressure on those trips. To be a ‘Good Catholic’ (or Protestant). To set an example. To show how tolerant you really are. The urge to say or do something transgressive to relieve the pressure could be overwhelming. It wasn’t just a throwaway line to me, but the acknowledgement that we as the children of the Troubles were supposed to be better, to pave the way for a post-conflict society, and that like all children, we would sometimes disappoint. 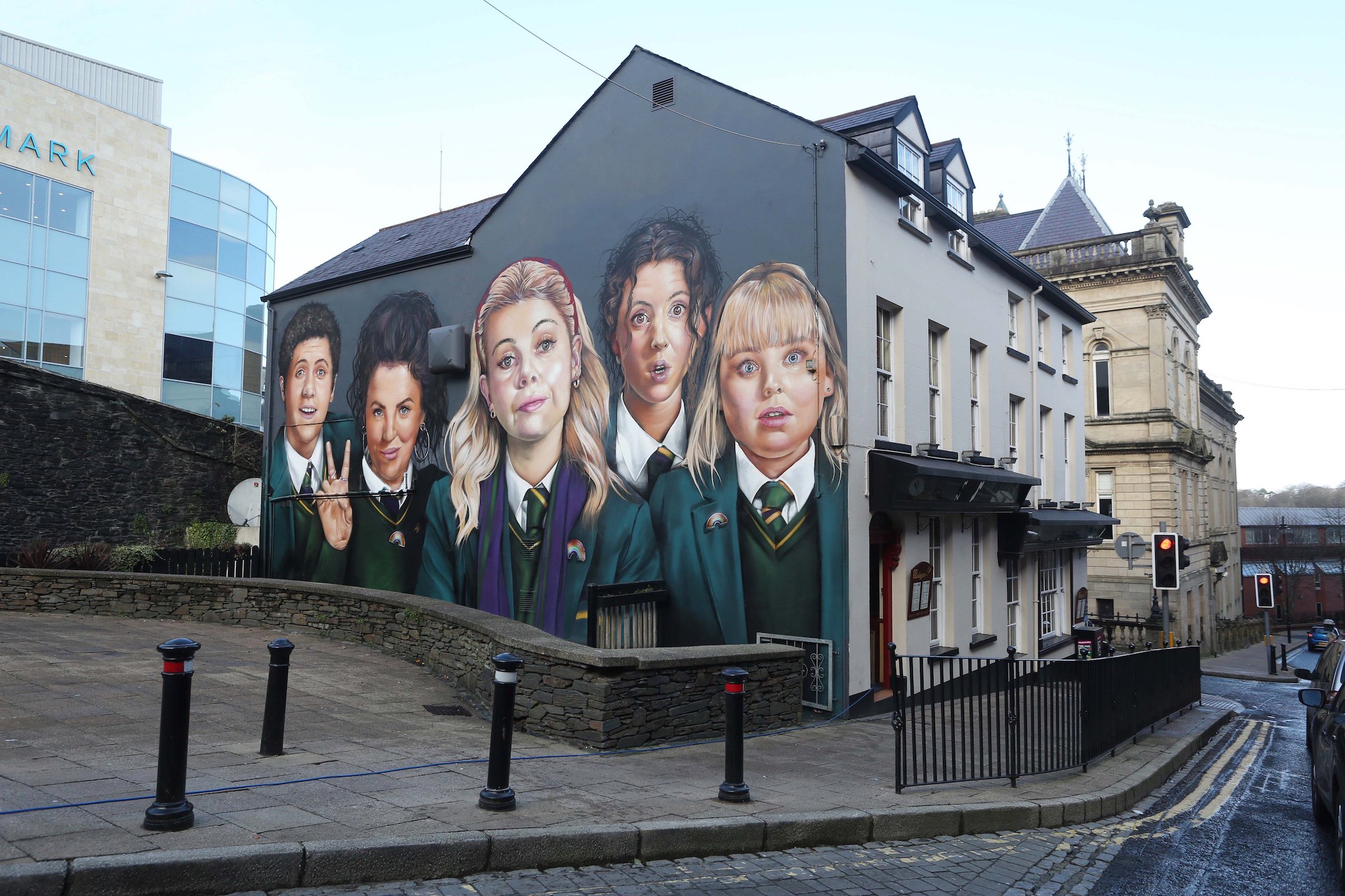 Now Derry Girls is in its ceasefire season. It has been on a journey that everyone my age in Northern Ireland has been on too. It is the only cultural event that has ever sought to tell our stories honestly.  The madness and the mundanity. The weirdness and the funny stuff. The soldier falling out of a helicopter in a field on St Patrick’s Day and then offering a lift to the pub for the celebrations (this really happened to me and my siblings).

I am Erin, with my literary pretentiousness. Like her, I even tried to make a wee documentary, only on tape. We share a vocabulary and it’s one I’ve never heard before on screen. Even our greasy chips get a look in. I see it and recognise myself and it is utterly joyful. To be seen, finally. When we have been the other, and we have been nothing, for so many years. To be heard. My life, our lives. Not in a news bulletin. Not an inconvenience. Not just something messing up Brexit. Not the IRA.

Derry Girls centred women’s stories and lives. I’ll miss it dearly, but I hope that its legacy is that finally, through the eyes of Erin, Clare, Orla and Michelle (and yes, even the wee English fella), we are seen as human beings who have lived through the silly, the scary and the profound.

Linkedin
RELATED ARTICLES
OTHER ARTICLES
From the Yakuza to a biker gang, Bruce Gilden recounts capturing Tokyo and Osaka in the ‘90s.
In the latest OFFF Dispatch, the enigmatic designer dives into his process, connecting the dots between his unique and varied creative output.
In our first OFFF Dispatch piece, the Arce Studio founder shares her tips on standing out from the crowd.
New legislation is set to make it more difficult to hold Israel accountable for its human rights abuses.
Following the release of his newly republished 1991 book, Redheads, the American photographer reflects on his celebration of ginger people and their magnetic power.
In the last of our dispatches from OFFF Barcelona, Rufus Deuchler and Vincent Gault discuss the future of creative process.