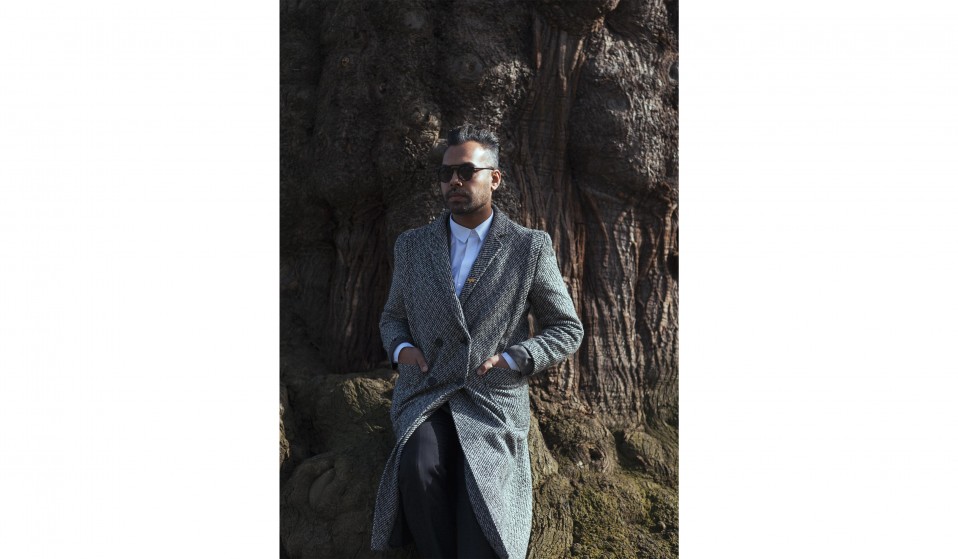 Writer and curator Shumon Basar had to leave home to find his own perspective.

Writer and curator Shumon Basar had to leave home to find his own perspective. Along the way he made friends with Generation X author Douglas Coupland and curator Hans Ulrich Obrist. Together, they've created The Age of Earthquakes: A Guide to the Extreme Present — a provocative survey of our fast evolving digital era.

Shumon Basar knew he wanted to dedicate his life to ideas, but didn’t know just quite where to set up his stand. Then a trip to Dubai made him see the world in a whole new way. That realisation opened the flood gates for curating exhibitions, editing collections and magazines, a novel-in-progress and co-writing a book with Douglas Coupland and Hans Ulrich Obrist.

He spoke to Huck about the moment that unlocked a new way of thinking.

I was born in the mid-seventies. In Doug (Coupland)’s sense, I’m not sure what generation I would fit into. I feel like I’m between ‘X’ and ‘Y.’ “Generation X-and-a-Half,” or something. But for me, I felt the particular quality of being that generation around the year 1999-2000 as we moved into the new millennium and the new century. We were too young to be old and too old to be young.

I had this weird feeling that whilst one could thrive from imbibing the ideas of dead heroes, the world had changed. But we simply didn’t know into what yet. I really felt like a satellite that had left its orbit and was sort of floating in space. You know where you come from, but you don’t know where you’re going.

There’s this uneasy feeling of being in between a past that you could clearly name and a future you simply didn’t have any idea about yet. It all changed for me when I went to Dubai in 2005. This was an incredible epiphanic moment. Not because of what Dubai was specifically — although that was very important. But more because what happened then. 2005 was very important because we were in the middle of the War on Terror decade. The Middle East had become the spectral territory of earth and it’s the rhetoric of the new grand narrative, which was one cooked up in the 1990s by the neo cons that these are our new spectral baddies, right?

So for me it became very important to go into that region and try to prise open fact from fiction and fantasy. I arrived in Dubai and this was the hyper-acceleration of Dubai’s super-acceleration. Yes, it was building these crazy things, but more in terms of how it was implanting itself in the global imagination — from Bangladesh to Brazil.

For a place to do that in such a short period of time is kind of amazing regardless of what you think about the morals and whether it’s beautiful or ugly. The fact that they managed to do that was something.

You know the last scene of The Truman Show. I basically had that moment. He’s on the boat, thinks he’s free. He’s sailing, the skies are blue. The wind’s rushing through his hair and then the boat crashes. He thinks, “What?!” That blue sky is not a blue sky, it’s a painted construct artifice and he realises, ‘My god, I’ve been living in a literal bubble.’

I had that moment the first time, I went to Dubai, because for the first time, even though my family’s from Bangladesh, I grew up entirely in England and have had a privileged and wonderful European/American-centric education at Cambridge and everything. That was the moment where I felt like I’d stepped out of the snow globe of the West and importantly, very importantly this was a new gravitational centre that actually was speaking about this future that I didn’t know about until that point.

There’s always been a gravitational centre of the earth, culturally economically, mythically and in a way the West has owned that for at least 500 years. But I realised at the beginning of the 21st century that a large part of that narrative is over now.

There’s this incredible development in Dubai of 300 man-made islands called The World and basically I’d been taken on a speed boat journey through The World and we landed on Greenland — that was the only island they’d built anything on. It was like a villa from a Bond movie and we were told a week before Henry Kissinger and Condoleezza Rice were there. God know’s doing what — I don’t want to speculate.

Anyway we got out of the boat, we’re standing on this clump of sand, looking back saw this incredible skyline going up. The Burj Khalifa was halfway-built, the Burj Dubai was halfway-built and that was the moment — looking out at The World — where I thought. ‘OK, where I come from this thing called The West is over there. It’s kind of faraway. China is here. Mumbai is there. I look that way I see Lagos and Johannesburg.’ It changed everything at that point. The terms we use: Middle East, Far East, Near East — they’re all based around a centre that’s based somewhere. GMT for example, the people who invented GMT and decided to run it through Greenwich were absolute geniuses. They literally terraformed the kind of conceptual image of the earth and made all distances measurable from here: near, far, exotic, local, friends, enemies.”

What from that point I felt moving from the Gulf through the Middle East, my imagination, my mind, my emotions and a lot of my psychic energy for the last decade have been in that part of the world. It’s also project about “self-othering” yourself. That is displacing yourself from the context from which you’ve been told is the only one that somehow matters. When I’m in Dubai or Doha, Beirut or Istanbul, or funny places you’ve might’ve never heard of like Kyrgyzstan or Uzbekistan, they’re not exotic anymore, they’re next door.For me, in our book The Age of Earthquakes, it was very important that the contributions from artists were not only varied generationally, but they were varied globally. So there are many artists in there who are close friends from Kuwait and the UAE and China and Johannesburg.

We talk about the internet like it’s monolithic but it’s actually internets. The internet is also local and locally structured and locally meaningful. Of course there are things that transcend that but it’s a total misnomer and a fable to say we’ve created a truly uniform and universal goop that everyone plugs into — like the Borg. That’s just not the case.

There’s a need to displace one’s self and feel ignorance and an amount of naivety, vulnerability even. You just don’t know but those are probably the times when you learn the most. One of the things that binds us together is less consolidating what we already know, but constantly wanting to expose ourselves to things that we don’t know.

The Age Of Earthquakes by Shumon Basar, Douglas Coupland and Hans Ulrich Obrist is available now from Penguin Books.

Linkedin
RELATED ARTICLES
OTHER ARTICLES
We sat down with trans comic Jordan Gray to discuss the power of portraying complex characters, giving humanity the benefit of the doubt and getting naked on live TV.
Ireland’s national sports are modernising. At the forefront of this movement is Na Gaeil Aeracha, the country’s first ever queer GAA club.
Meg Handler’s photos capture diverse groups of New Yorkers coming together for the collective cause of civil rights.
This afternoon, workers of the hospitality chain came together to call for better pay and working conditions.
A new documentary tells the story of an unassuming cul-de-sac of 13 timber framed houses built by Fusions Jameen – London's first Black housing co-op.
Photographer Nico Froehlich’s series documents South London’s diverse communities, while also reflecting on their fragility amid rapid gentrification.