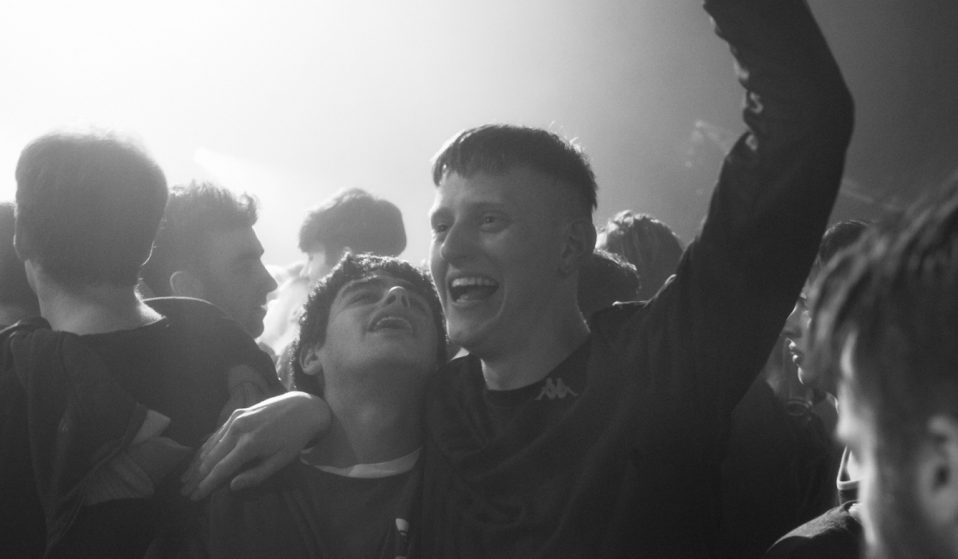 In the new film Beats, director Brian Welsh travels back to 1990s Aberdeen to tell the story of rave culture – why it mattered, and how it got torn apart.

In the new film Beats, director Brian Welsh travels back to 1990s Aberdeen to tell the story of rave culture – why it mattered, and how it got torn apart.

The Criminal Justice and Public Order Act in 1994 saw to it that you’ll never experience rave culture like they did in the early ’90s. A wide-ranging piece of legislation, the Act is notorious for setting into law police power to shut down events where music is “characterised by the emission of a succession of repetitive beats”. A direct attack on the ’90s free party scene, it signalled the end of spending bank holiday weekends in a field somewhere off the M25, having it large – and free – with a bunch of liked minded strangers.

In the new British film Beats, that’s the experience best friends Johnno and Spanner are after. Set in small-town Scotland in 1994, the film offers the next best thing to time travel as it sees the boys – played by Christian Ortega and Lorn MacDonald respectively – hatch a plan to make it to a huge off-the-motorway rave before their lives splinter forever. The second summer of love looks set to be their last, as Johnno’s family, intoxicated with New Labour-fuelled aspirations to move to the suburbs, are leaving Spanner to slog it out on the council estate with his drug dealer older brother.

The film is a labour of love for director Brian Welsh, who grew up in ’90s Aberdeen and has been yearning to make a music film on the era. After seeing Kieran Hurley’s 2012 play Beats, Welsh set about adapting the story for the screen. The result, shot in nostalgic black and white, is a story of friendship, an encyclopaedic musical journey through the era (musical director is Keith McIvor, one half of techno duo Optimo, who shared over 1000 pieces of music with Welsh for the film). It is a celebration of the culture, climaxing in one last massive blow out. Here, director Welsh talks about how he got us back to the 1990s.

Why was the Criminal Justice Bill such a defining moment?
It was about the end of all sorts of alternative ways of living. We saw the end of travelling communities in Britain and the idea that there is no longer any free space. It was one step on a journey to outlawing other acts of dissent and acts of protest. It was a much freer time then, and the Criminal Justice Bill took away some of our civil liberties, which was then continued by Tony Blair, which is something we try to point at in the film.

Tell me about your personal history with the music and culture seen in this film.
I was 13 at the time of the Criminal Justice Bill, but I was very aware of dance and hardcore music. Happy hardcore and The Prodigy were a gateway to all of that Detroit techno. I started going out at 15, so missed the [sound system collective] Spiral Tribe and the free parties, but there was still a lot going on. There was this club in Aberdeen called The Pelican, a sweaty basement run by this guy that won the lottery and spent all the money bringing over Detroit legends like Carl Craig and Derek May to play to a crowd of 15 folk on a Wednesday. That period really changed my life – I don’t think I’d be doing what I’m doing without those experiences.

How so?
I grew up in Aberdeen where there was a lot of hard drugs, like heroin, going around. There was extreme violence. Aberdeen had done very well out of the oil industry but there was a lot of toxic capitalism – an individualistic approach to life, and everyone looking out for themselves. I hated school. When I discovered that music and that scene, it allowed me to express myself. Most of my best friends now are from that time.

I remember sitting around the dinner table and there was this excitement about New Labour and Tony Blair, this new guy who was modernising the party, talking about this aspirational future for people. I’m one of the fortunate ones who did okay out of that, but many, many people I knew back then didn’t. So the film is trying to have a conversation about that.

How did you approach filming the climatic club scene?
We set out with the objective of doing the best rave dance sequence in cinema. We’d watched so many films that just fuck it up with a bunch of fake extras dancing in the background. We decided to have a real rave with real people and we’d work around that. We wanted it to go off on the night and to capture the intensity of that.

So did the extras experience the party as a real night out?
It was a proper night. We got 1000 people, McIvor pulled together a line up of the best Scottish techno acts. The police even showed up at the end of the night. It took place in Glasgow at an old zoo which was lying empty. We didn’t stop [the night] at all. People were very cool. We had a dialogue with them beforehand; sent them videos about what to wear, and what ’90s dancing looked like.

And what was ’90s dancing like?
It was wilder and freer. People are far more self-conscious now; everyone is recording everything all the time. Back then, mobile phones weren’t everywhere. We were probably more uninhibited. There was an innocence that was hard for us to recreate.

How did you make the musical choices?
I wanted the soundtrack to feel like a crazy mash-up mixtape. There are many times in the film where two or three tracks are playing simultaneously. The rave is the most extreme example where there is a lot of sonic energy coming at you. We start in hardcoreland in the boys’ bedroom, and end up in this sophisticated Detroit techno space at the rave. There’s a journey of discovery in the music for them.

How is the rave culture in Beats crucial to the boys’ friendship?
When I was growing up, the way to express yourself as openly with anyone, let alone somebody of the same sex, was quite a challenge. One thing that going to raves and taking drugs does is tell you that it’s okay to tell someone you love them. And that’s a liberating thing really.

What relevance has this scene from over two decades ago got to now?
It’s vital as a young person to be disobedient and to break the rules. If you look at any interesting subculture over the years, it’s always pushing at something ideologically and questioning something. More often than not, it’s about young people taking over space and defining it on their own terms. If you look at the country now, it’s run by old people who have far too much fucking money. It’s time for young people to step up and say, you’ve had your chance to make the world a better place. You’ve fucked it up, so now it’s our turn.

BEATS is in cinemas 17 May.

Linkedin
RELATED ARTICLES
OTHER ARTICLES
Photojournalist Fiora Garenzi spoke with people still living in Eastern Ukraine, an area which seen some of the heaviest fighting since the war began.
Protestors gathered outside Downing Street following the latest atrocities committed by Israel against Palestinians living in the besieged strip.
In the latest instalment of Photographers in Conversation, the creator talks portraiture, platforms and taking inspiration from Little Simz.
A sharp increase in officers armed with the electrical weapon is resulting in serious injuries and deaths.
To mark the premiere of his new documentary on surfing giant Gerry Lopez, the filmmaker and former pro skateboarder sits down to share his unique brand of wisdom.
Photographer Bud Glick recounts documenting everyday life in the area, and what it taught him about the Chinese immigrant experience.