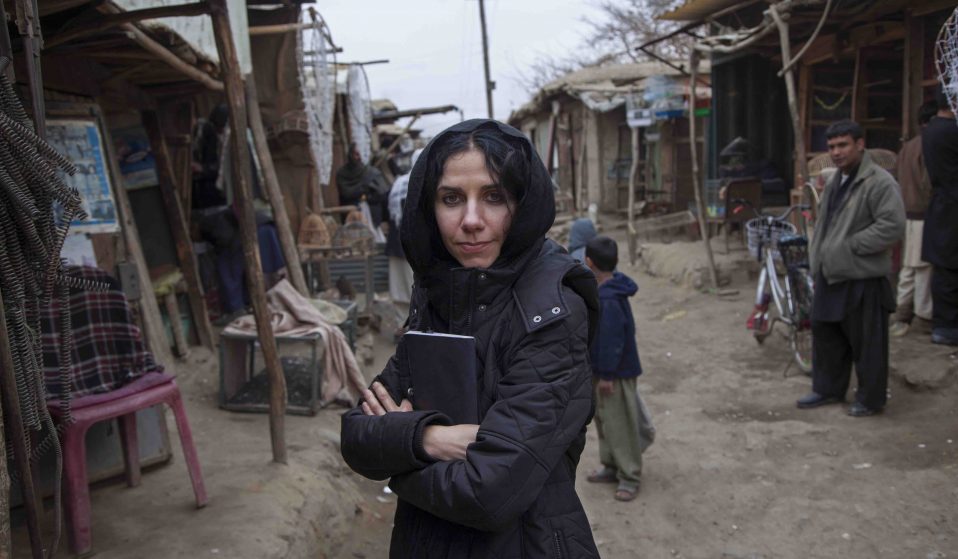 Photographer Seamus Murphy talks through his new film, A Dog Called Money – an intimate portrait of the artist and her creative process.

Photographer Seamus Murphy talks through his new film, A Dog Called Money – an intimate portrait of the artist and her creative process.

Music icon PJ Harvey and award-winning photographer Seamus Murphy have worked together for years. They’ve created a series of films to accompany Harvey’s music from her 2013 album Let England Shake, as well as a book of her poetry and his photography in 2015: The Hallow of the Hand. Murphy’s debut feature film, A Dog Called Money, continues this collaboration – but a straight-up music doc on Harvey this is not.

Together the pair travelled to Afghanistan, Kosovo and Washington DC, and the resulting experiences led to songs that became Harvey’s last album, The Hope Six Demolition Project. Said album was created and recorded as part of an art experiment at Somerset House, where the public could watch the recording sessions in a specially constructed room behind one-way glass. Murphy’s film exists as both a document of their time travelling in the various countries, capturing the inspiration that led to the songs, and also the process in which those experiences are turned into songs.

After the film screened at CPH:DOX in Copenhagen, Murphy talked us through the whole project.

Both you and Polly are very autonomous artists. What works between you when collaborating?
We’re very separate and we do our separate things. She was just there taking notes and I didn’t have to make sure she noticed certain things. She wrote a song called “The Orange Monkey” and I didn’t even see the monkey. I was looking at one thing and she saw another.

Were you worried about bringing someone inexperienced in those areas?
The Afghan trip was one that I thought long and hard about. Not just the safety element, but also the idea of bringing someone like Polly to Afghanistan: what does that say? Is that the right thing to do? I felt it was a very good idea and also a valid way of seeing these places but not through typical filters. There were definitely concerns but that would have applied to anyone. I felt a responsibility in some ways. I’m sure she had a few restless nights about it because it’s a big thing. Before my first time in Afghanistan, in 1994, for nights I couldn’t sleep thinking about whether I should be doing it. The same recently in Syria, you ask yourself ‘what the hell am I doing?’ I think a lot of people said to her, ‘you’re mad. What are you doing?’ but she’s very strong. Once she made up her mind that was it. I didn’t feel like I was minding someone at all.

Did she have a plan for what she wanted to get out of the trips or was she purely in observer mode?
Not really. We very much had a pact that if either of us thought it wasn’t working, that we weren’t getting anything or it didn’t feel right, then we could say that to each other and there would be no commitment to finish it. There was no contract or anything. We had a dream idea of doing these trips and doing a book of poetry and photography and then there be an album and a film. We had no idea what the film would be. Even the idea of filming and then making the album didn’t exist at all. There was no plan at all – it was quite vague. But once we did Kosovo together we knew we were onto something.

Obviously, you want to avoid the trappings of things like poverty tourism when undertaking these kinds of projects. How do you approach this?
I just behave the way that I do. I’m not saying I feel their pain – that would be awful – but I’ve spent a lot of time in places like Afghanistan and I really like the people. Same with DC, I’ve been back many times. I think in my director’s statement I wrote that we were being journalistic without being journalists.  What I meant was that our methods were journalistic but also very subjective and empathetic. You can go to places like that and just get your copy or your pictures and get out but that’s not what I do. And Polly’s very sensitive; she managed to not cross a line but come away with some stuff that’s absolutely unique.

What role does the camera play in places like this? Is it a protector or can it turn people away?
It’s definitely protection when you are in places that are really ugly or scary. It gives you something to do and to focus on. Although that can be dangerous itself; I got mugged in DC. I had no problems in Afghanistan or Kosovo but I got clocked over the head in DC and lost my camera and was taken to hospital. I was filming a bloody cat walking across this streetlight and I should have been aware there was a group of people there but I was immersed in the camera. If you’re somewhere where they don’t want photos taken, it’s always the camera that is the problem – they want your pictures. The camera always attracts trouble if there is going to be trouble. So it’s both protection but also a red rag to a bull. 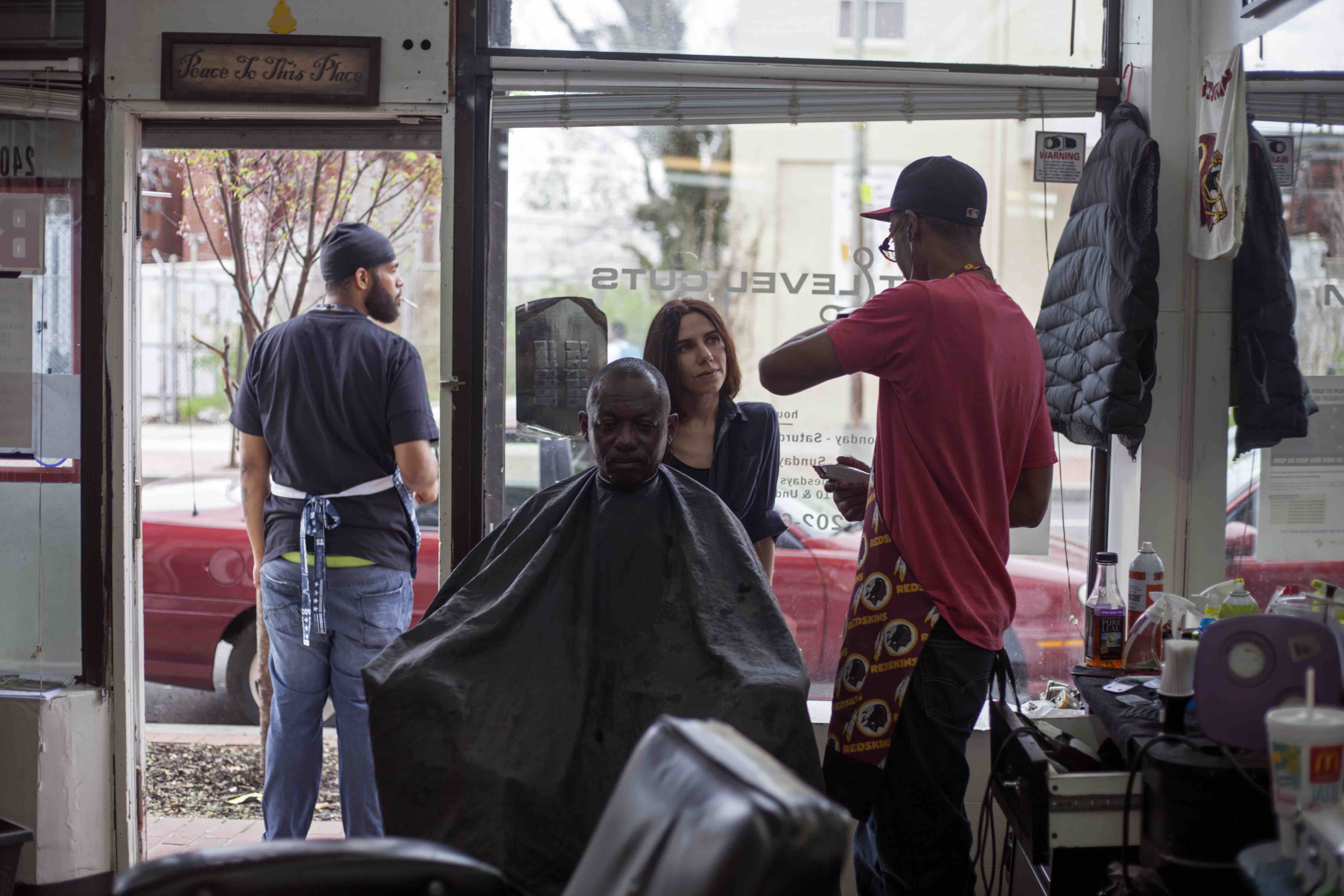 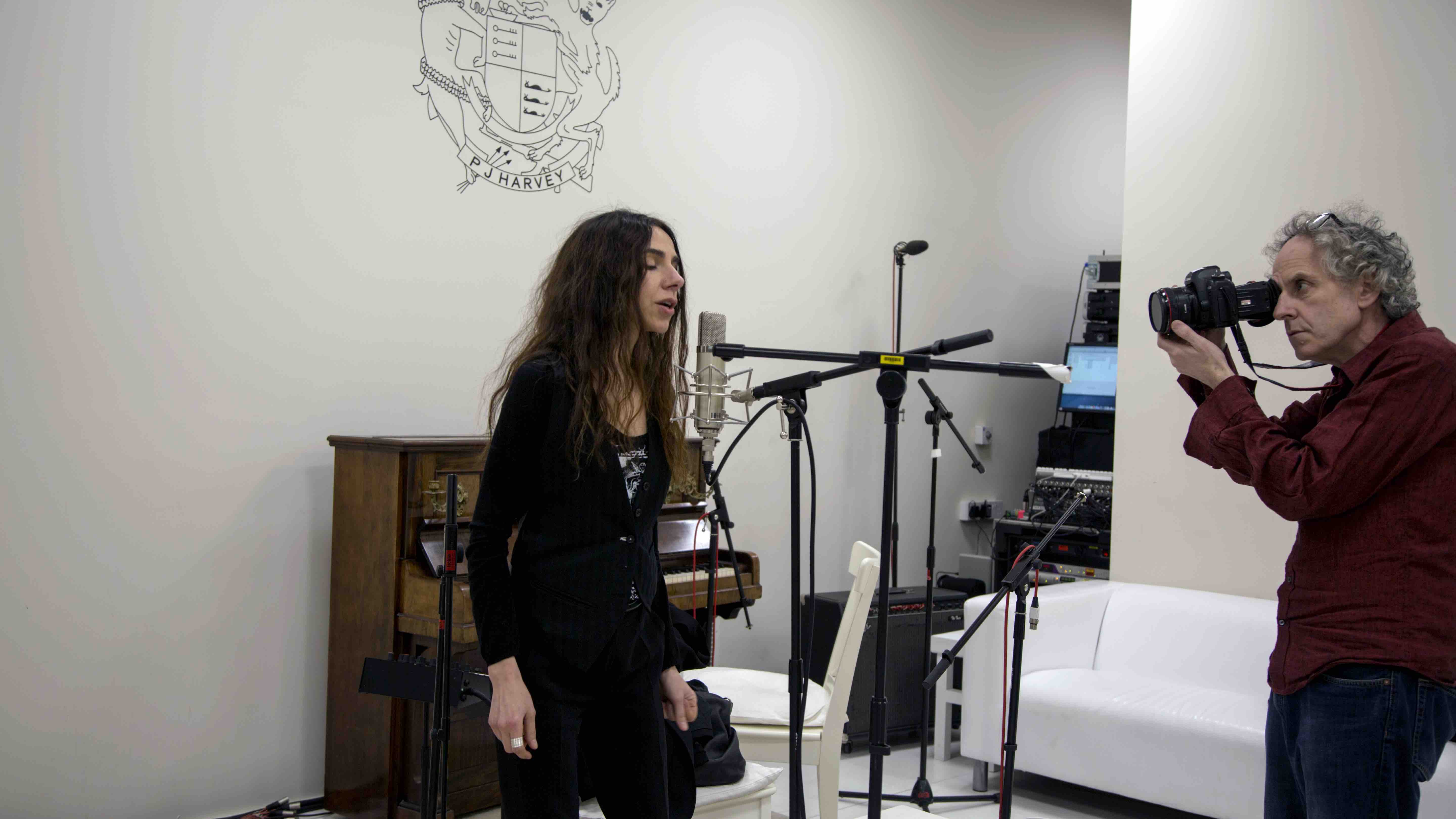 How was the process of being in the room and capturing the album being made up close like that?
It was strange. They didn’t know if they were going to be able to play as they would normally play due to them being watched. You couldn’t leave the room; people couldn’t go off as they normally might. There were allocated break and lunch times but it was like they were on at all times. It was very bright in there and very intense. There was eight weeks allocated for the recording but it was done in five because everybody was so hyper, it was like everyone was on speed. Nobody slept that much. I got an unbelievable amount of footage from it.

Not many people get to experience an album being made in such an intimate setting and also be an objective bystander.
Oh, I was in heaven. I didn’t know how albums were put together. It felt like an amazing privilege and I loved the weirdness of it. John Parish’s [Harvey’s bandmate] section almost had this shamanistic quality to it, all these weird little percussive things – basically anything that would make a fucking noise.

Did Polly direct you at any point during this part?
No, not at all. I also never knew that this footage would become part of the same film. I just thought it was interesting. They started building the thing and I started filming that and the more I thought about it, the more I thought that this is quite a weird experiment because if this doesn’t work out there are hundreds of people who have tickets and this has been talked about. It was a lot of pressure on those musicians and on Polly who is very private. But she does that; she pushes herself into these uncomfortable positions.

Polly is very much someone who has creative control over her own work, so to allow you to shape a narrative around her requires a great deal of trust. Was there any anxiety for you when showing her the finished thing?
Absolutely. She hadn’t seen anything that I had been working on – no footage. I wanted to be with her when she saw it and she was just like ‘oh just send me a link’ and I was like ‘shit!’ But I got this lovely response saying she was in tears and she loved it. If she had turned around and said that she hates it, then I really wasn’t sure what I was going to do. It was a very strange 24 hours waiting for that verdict.

Are you going to collaborate on any future projects?
I think we are. We don’t have any plans but we did talk about doing something in the future. When you get a big idea, I think the details look after themselves. She’s writing a lot of poetry at the moment and I have another book coming out, we’re both busy but I’d love to do more with her.

A Dog Called Money has its UK Premiere at Sheffield Doc/Fest next month.

Linkedin
RELATED ARTICLES
OTHER ARTICLES
The government is scrapping the Human Rights Act in a move that will hit marginalised people hardest.
Members of the collective share some of their reasons to run as part of #UnitedBySummits, a campaign that looks to uncover transformative power of the outdoors.
Photographer Robin Graubard’s debut book offers an unflinching record of turbulence and change across the Balkans.
Our new magazine is here, starring the inimitable Mitski. Order your copy now and join us on a trip around the world.
Over the weekend, London locals came together to resist a pre-planned police raid targeting delivery drivers.
Following the release of his latest album God Don’t Make Mistakes, the rapper talks horror villains, police brutality and being unafraid to show his vulnerable side.