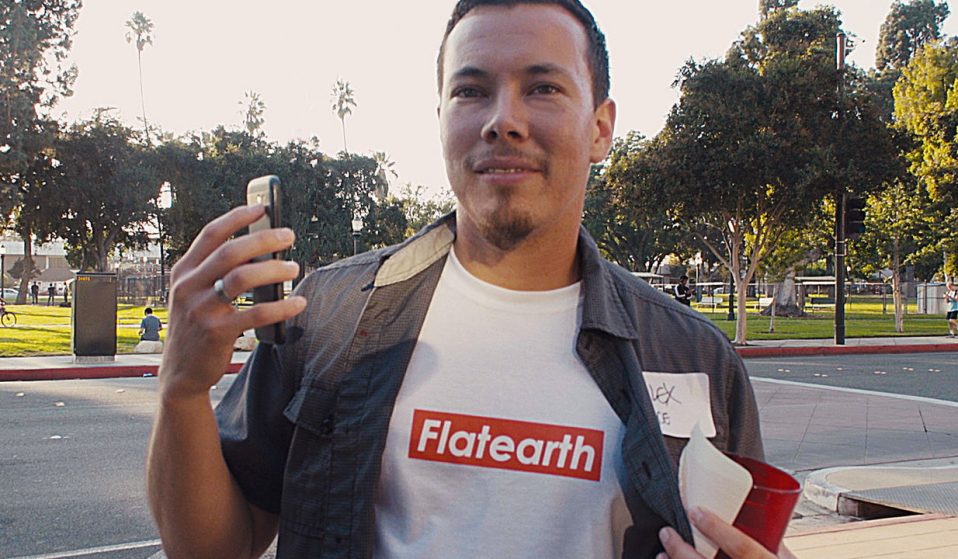 Photography © Netflix / Behind the Curve

‘There are continents outside of our Antarctica that are full of the elites and the rich and the powerful, and the government wants to keep that a secret.’

In new documentary Behind The Curve, filmmaker Daniel J Clark gets to know the people who believe the earth is flat. ‘There are continents outside of our Antarctica that are full of the elites and the rich and the powerful, and the government wants to keep that a secret.’

We’ve known since around the 3rd century BC that the planet on which we live is a sphere. But for just as long, and despite an abundance of photos of the globe seen from space, one baffling theory has refused to admit defeat: the idea that the Earth is flat.

In order to make Behind the Curve, a documentary now available on Netflix, director Daniel J Clark and his team embedded themselves in the Flat Earth community in an attempt to provide a well-rounded picture of a fringe group which used to being mocked. If the film has a star, it is the indomitable Mark Sargent, a vehement flat Earther who seems to sincerely believe that the movement is “winning against science”. Though at first Sargent may seem like a lone wolf, we are quickly introduced to a host of like-minded people who feel the exact same way.

A pseudoscientific worldview based on the principle that the government is lying to us, Flat Earth theory provides a home for a spectrum of ideas, including that the Earth is thousands of years old, that we live on a Hollywood sound stage, and that vaccinations are a conspiracy.

Despite including some of the more crackpot soundbites – “You know they made up dinosaurs?” – seemingly for comic effect, Clark is clear that the intent of the film is not to mock the believers themselves. The scientists and psychologists featured in the documentary take the time to explain the phenomena involved, and point out that simply telling people they are wrong often entrenches their ideas. We had a chat with Daniel about what he learned during the making of the film, and how it is has been received.

Do you think films like this ever change people’s minds?
I absolutely hope so. We talked to a science communicator called Asheley Landrum; there was some question whether making this movie was only further spreading the word of Flat Earth. She said more so what it does is inoculate people from believing this. So, while this film’s not necessarily gonna change flat Earthers’ minds – which we never really thought it would – it can hopefully allow people to question information that they would otherwise be really ready to accept.

Has the film made you reflect more on the way in which you come to accept certain truths?
Oh, absolutely. That’s one of the things that it really brought out – how do I know what I know? And why do I think I’m right? Even with Flat Earth, when we started I made sure I really looked for evidence that proved the Earth was flat. It definitely has brought me to question a lot of my initial beliefs, and whether I confirm them or change them.

Did you hear any explanations as to why people would ever pretend the Earth was round?
There are a couple of different explanations. One of them is a religious angle, which says the existence of a globe Earth doesn’t need God; but the existence of a dome [one of the Flat Earth theories] needs some sort of creator. So they believe the ‘government’ is hiding the dome or the flat Earth because that proves God’s existence, and they don’t want to give up their control to religion.

And then there’s the other theory, which is that there are actually continents outside of our Antarctica that are full of the elites and the rich and the powerful, and they want to keep that a secret, so no one’s allowed to go into space because they don’t want people to go to the other continents. This explains why liberals are worried about climate change – because that will melt the ice wall and then the continents will be accessible to everyone.

You mentioned religion. I was wondering if you found a significant overlap between flat Earth believers and Christian thinking?
Definitely some of that, for sure. But not everyone. Especially the people we talked to; they had to believe that there was some sort of creator to make the dome, but they were not necessarily saying, “This is biblical proof.” However, online I’ve seen a lot of that: using scripture as proof.

How has the film been received by the Flat Earth community?
You know, it’s been an evolution of emotions. Mark [Sargent] really liked it. A lot of other Flat Earthers who were not in the film couldn’t understand why we weren’t Flat Earthers yet. Then when we moved to Netflix and it kind of blew up, we received a lot more negative comments – even from the same people. The public’s been very nice but the Flat Earth community has not appreciated it. I think it probably has a lot to do with the coverage and the sensationalised headlines that keep going out.

Why do you think people like Neil deGrasse Tyson and Bill Nye are so derisive towards fringe beliefs like Flat Earth theory? Do you think their brand is perhaps more important to them now than the hope that they might change people’s minds?
Absolutely. And I think it’s the same if you’re a politician: if your ideas are rational and you’re willing to compromise and listen and change your beliefs, I don’t think that’s going to be very popular with a mass. But when you see someone who’s pretty aggressive and willing to dismiss groups outright and really have a firm stance that you can quote, I think that’s more appealing. I’m sure that there’s still part of them that would sit down and rationally have a discussion with someone about it. But I think for soundbite purposes and especially TV shows, you need those strong moments.

Do you think that Flat Earth belief is a particularly 21st-century problem? I know it dates back centuries, but YouTube have been criticised for perpetuating the beliefs because of the way that their algorithms work.
I personally think that YouTube is a very big contributor – not necessarily to conspiracy thinking, but I think people are so used to trusting produced videos. There’s no scientific peer review on YouTube. The fact that anyone can do that – you don’t need a TV channel to distribute it – definitely contributes to a lot misinformation and a lot of biased information. On Wikipedia, you have to cite something. There’s nothing like that on YouTube at all. You can say whatever you want and say it’s completely true and you have all the facts. There’s nobody there to immediately say you’re wrong, unless they just put a comment down in the comments section – and who’s going to read that and trust it?

Behind the Curve is on Netflix now.

Linkedin
RELATED ARTICLES
OTHER ARTICLES
New legislation is set to make it more difficult to hold Israel accountable for its human rights abuses.
In our first OFFF Dispatch piece, the Arce Studio founder shares her tips on standing out from the crowd.
For decades, Wilmslow Road has been a bustling area full of curry houses. But how did it come to be what it is today?
From the Yakuza to a biker gang, Bruce Gilden recounts capturing Tokyo and Osaka in the ‘90s.
A new documentary explores the government’s efforts to quash the protest movements of the late ‘60s by any means necessary.
Government plans to make it harder for people to go to university will only entrench inequality.