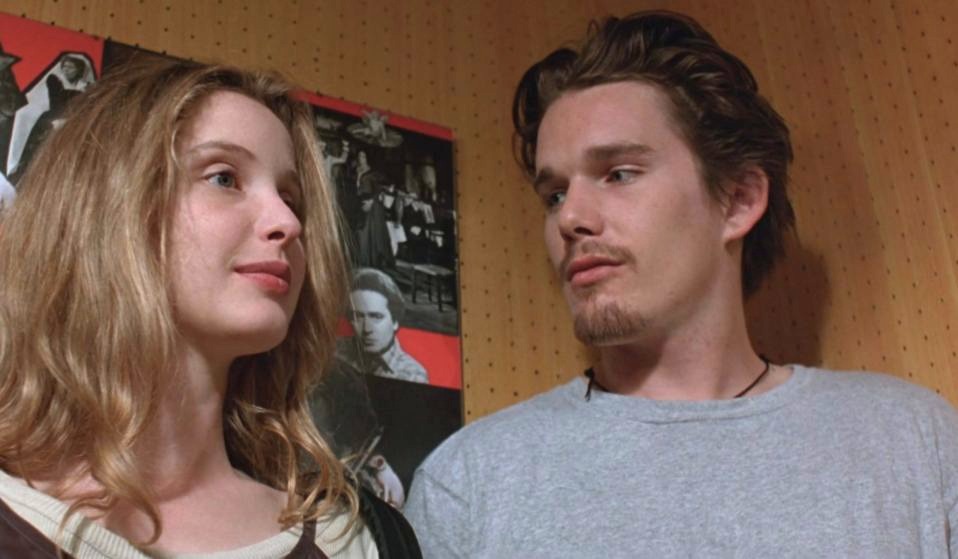 Linklater reflects on capturing the thrill of romantic possibility in Before Sunrise, 25 years on from its initial release.

25 years after the initial release of Before Sunrise, director Richard Linklater reflects on the "beautiful mesh" between himself and lead actors Ethan Hawke and Julie Delpy, and capturing the thrill of romantic possibility on camera.

It’s been a quarter-century since director Richard Linklater first introduced audiences to strangers-turned-lovers Jesse and Céline in 1995’s romance classic Before Sunrise. The film, set in the picturesque city of Vienna, follows Jesse (played by Ethan Hawke) and Céline (Julie Delpy), from their initial first meeting on a train, as it evolves into a deep affection over the course of 24-hours. This original dalliance spawned two sequels: Before Sunset, 2004, and Before Midnight, 2013, which see Hawke and Delpy reunite in similar city centre meanderings.

Delivered in nine-year intervals, Linklater’s trilogy gave audiences an unparalleled insight into the ever-evolving love life of a fictional couple. To mark Before Sunrise turning 25 this year, we asked Linklater to revisit the cobbled streets of Vienna and reflect on the film’s enduring legacy.

Before Sunrise was based on a real experience you had where you spent a day meandering around a city with a young woman you’d recently met. What convinced you it’d make a good film?

Looking back, it must be the way I think about movies. I was walking around with Amy [the woman who helped inspire the story] in Philadelphia for a whole night. We were attracted to each other and I was thinking, ‘Oh, this is a film.’ I wanted to make a film about a feeling that minimal. Can you capture that: two people meeting and having a connection? In the romance genre, that’s usually just the beginning and then the story picks up and they head to bed pretty quickly.

I was in opposition to that. The first kiss is a big deal. It takes a long time to get there, as it often does in real life. In my previous film Dazed and Confused, I wanted to capture what it felt like being a teenager driving around, trying to be cool; not much happening but everything happening. It’s always amazing when you get those films made, because they’re hard to describe. It doesn’t sound compelling on paper. 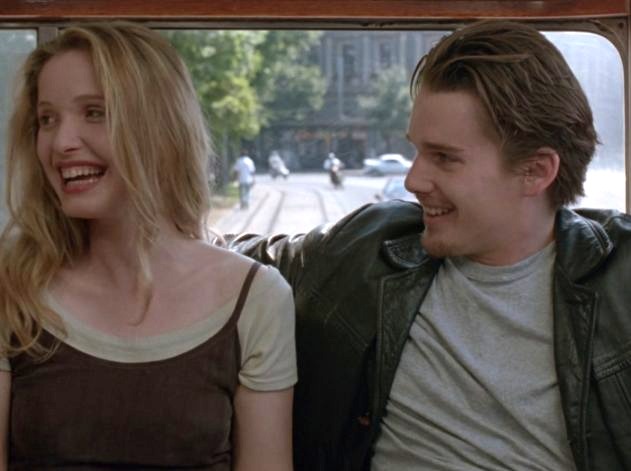 Most European cities are infused with a certain romance. Why did you choose Vienna as your backdrop?

Let’s face it, romance can be anywhere. I had earlier versions where it was set in Texas. San Antonio is a very walkable, fun, urban, funky downtown area but I remembered leaving the country for the first time with my first film. I was in Germany so I was thinking of maybe setting it in Berlin. The wall had just come down and it was an exciting time.

Early on, Céline could have been American and Jesse could have been international; I was interviewing actors from both backgrounds and it was surprisingly interchangeable. I went back to Berlin at the end of ‘93 and was looking around Europe. I’d gone to a couple of film festivals with Dazed and Confused and landed in Vienna. The town has this wonderful modern vibe but there’s a dark side to it too, that’s kind of beautiful.

How did Ethan and Julie react to such a dialogue-heavy script?

We just processed the ideas. At the end of the day, the feeling of that script is not just me – the true essence of the movie was born by getting to know them. It felt absolutely necessary for them to bring all of themselves into it, so we quickly developed a working methodology between the three of us. I know as the director, as they know as actors, that you can’t force something.

I realised early on that it was a precarious balance of believability. This goes for all three films; if one of us had something we were trying to express and the other two weren’t on-board, it tended not to make it very far. There were things I felt strongly about, then you realise one of the actors just doesn’t get it and you let it go. It would be completely wrong to think Julie wrote Julie’s lines and Ethan wrote Ethan’s or I did both, it was a beautiful mesh.

Was it difficult to pin-point the key turning points in Jesse and Céline’s relationship with an ever-evolving script?

It’s all pacing and tone. I outlined it and I knew the beats, even the emotional beats. In the script there would be a slug line saying “Cafe Scene: Jessie and Céline’s relationship goes to a new level”. Theoretically, it has to be one of the best scenes in the movie, but there was no dialogue.

It was only when I got with Julie and Ethan in three really intensive weeks of rehearsal and reworking the script [that I knew how to write it]. I was going to do what I did on my first two films: work with the actors and infuse them with the characters to such a degree that they wanted to contribute. Julie and Ethan were very giving, generous and on-board for the challenge. 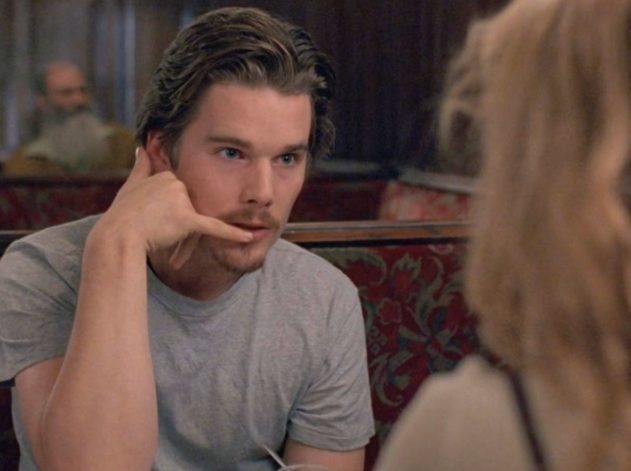 How did the intense rehearsal process impact the finished performances?

Nothing was ever improvised and there were no spontaneous moments. I mean, there were spontaneous moments in our process and then we recreated those spontaneous gestures. We shot in chronological order too, which for this film I thought was absolutely essential. The last thing we shot was the last day of shooting at the train station and it was written the night before.

The sequence with Jessie and Céline in the listening booth listening to Kath Bloom’s ‘Come Here’ is one of the film’s most electric moments. Was this precisely planned too?

That was an exception. I held back one crucial element of that scene. In the script the lyrics to the song were there, but I never let them listen to it until we were shooting. I held back Cat Bloom’s actual song until the camera was rolling. We had rehearsed the scene and I remember Ethan and Julie would jokingly sing the song but when we shot that day, I’ll never forget it. I did two takes and they were both wonderful. They hadn’t heard this song, ever, so they both seem more attuned to it. Also, to put them in such squeezed proximity and forced intimacy; that was fun.

Despite being 25-years-old, the movie remains almost timeless. Has this helped people connect with it over the years?

I think everybody’s always up for a girl meets boy, boy meets girl story. We were always destined to be out of place and time. There’s nothing about this movie that screams 1995 apart from the lack of smartphones. I was immediately getting letters and notes from people I’d never met. Mostly from older people saying ‘I met a boy on a train in 1970 and we talked all night’ – it just stirred stuff up.

I think as you get older it gets more poignant because you realise that when you’re that age, you think life’s always going to be like that. You think you can get off a train with someone you’ve just met. It’s a specific place in time that’s, by definition, taken for granted by people in that age range. That’s what we make clear in the next movie nine years later. By the time you’re 30, it’s a different life for so many people.

The last time we saw Jesse and Céline was in 2013’s Before Midnight. Is their story complete?

I don’t think any of us would ever write it off. We have three more years or so to make it within our nine-year window. Maybe we get together again in 25-years. We just don’t know.

Linkedin
RELATED ARTICLES
OTHER ARTICLES
After building his reputation covering the US civil rights movement in the 1960s, the photographer went on to produce some of the most enduring images of the past century.
Following the release of his debut single, Deyaz talks battling addiction, dealing with his struggles through music, and building a budding music career from his living room.
As she gears up for the release of her first book, the 24-year-old climate activist talks standing up to authority and building a more inclusive movement.
After fleeing the war in Ukraine, people are finding it impossible to secure affordable and decent housing in the UK.
Photographer Becky Tyrell went down to the fading banger and stock raceway to meet a community desperate to keep it alive.
A new podcast is opening up the conversation between trans women and trans amorous men in the hope of building coalitions.