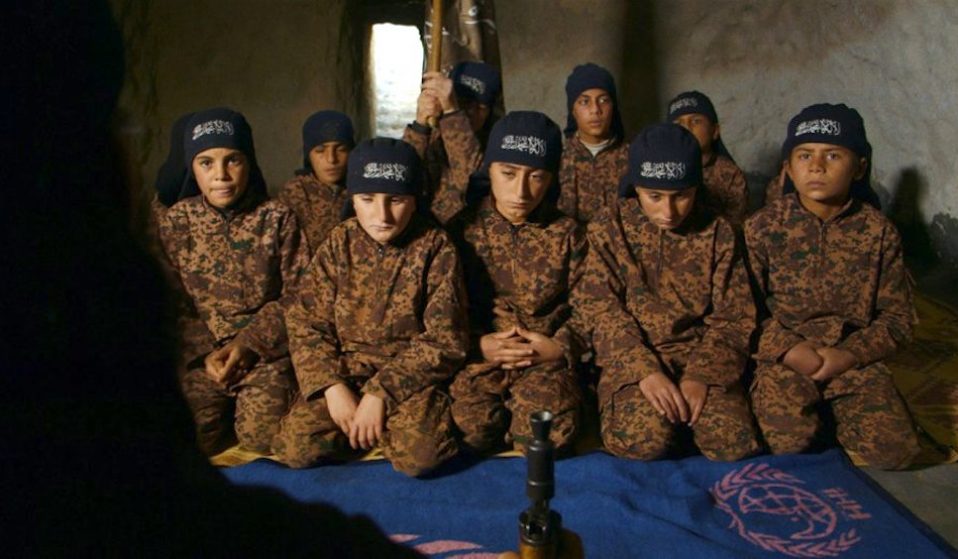 In his chilling documentary, Of Fathers And Sons, director Talal Derki paints an intimate portrait of life in a modern Jihadi family.

In his chilling documentary, Of Fathers And Sons, director Talal Derki paints an intimate portrait of life in a modern Jihadi family.

Posing as an extremist, Syrian-born filmmaker Talal Derki spent more than two years, on-and-off, living with a Jihadi family for his Sundance-winning documentary Of Fathers And Sons. The end result is a thoughtful, nuanced and profoundly shocking portrait of what life is like for those living in an Islamic caliphate. It’s a world so rarely seen – except through political dog-whistles and sensational headlines – and Derki pulls back the curtain with unflinching honesty.

At its core, Of Fathers And Sons follows a group of young boys on the path to radicalisation. They are led by their father, an explosives expert fighting for the Al Qaeda-affiliated Al-Nusra. It’s a coming-of-age story that’s overshadowed by ideology and Islamist fervour. Framing domestic intimacy – there are quarrels, games and moments of paternal tenderness – side-by-side with scenes in which mines are disarmed, beheadings are discussed and children no older than nine or 10 are taught to fire assault weapons, the end result is a film that is both eye-opening and deeply human. To mark the film’s release, we sat down with Derki to find out more about how he embedded with Al-Nusra, what he feels some journalists get wrong, and how he thinks we might break the cycle of extremism.

Why did you decide to make this documentary?
We struggle to build democracy, and the revolution sours and becomes a dictatorship, and that’s when Jihadi influences begin to grow and reshape how people understand religion. It was a desire to answer the question of how can this happen; what is the motivation, how do people manage to brainwash society, how does a dream become a nightmare? This challenge, to make a film from inside the society, to follow one family – a father, a radical – as he prepares his kids for the upcoming caliphate. It’s about the new generation of Syria, about the future. I wanted to understand who are those people, what happens behind closed doors.

How did you get that level of access?
It happened through the connections I made on previous film Homs. I got a lot of skills about how to film on the front line. Slowly I started to meet people, I started pretending that I was also sympathising with them and their ideology.

Were you nervous? How did witnessing this behaviour first-hand affect you?
To capture what the father was doing, when he was disarming mines – that was his specialism, dismantling car bombs, mines etc – you have to be with the character. You have to bring this stressful moment to the audience so they can know what’s happening. The people I filmed, they worship death, they want to get killed, they want to be martyred. They don’t care so much about life. The children also use the bomb as a toy, as a game. The game then slowly becomes a reality. It’s very risky, and I realised I survived by luck. Now, the father has been killed in battle, on the 17th October this year – just three weeks ago while he was dismantling a car bomb.

Are you still in touch with the family?
No, no, not for a long time. They look at me as a traitor. I was there posing as a sympathiser, they didn’t know who I was. Some of them have threatened me, even though some of them haven’t seen the film, they think of me as an enemy of the nation.

Did you have any worries that you’d be discovered while you were filming?
I had to keep this game going, I had to do what they do, agree with what they agree with. I was dealing with this for the whole period of filming – both in Syria and outside of Syria. We were there on-and-off for about two years. I was always taking care not to say or do anything against their ideology, no photos of me out with the girls, or with a drink or whatever. Nothing on social media could show a different side to me than the one I presented to them. I was working hard on that balance. Now the shooting is finished, things are easier. I can get back to my life.

Do you think there are things journalists get wrong when they report on this type of extremism?
In a lot of the media, you don’t have enough information to understand how it’s working from the inside. What are their motivations? What are their feelings? It’s important in the film to know that he’s a lovely father; it shouldn’t just be “oh, they’re bad people.” I want you to recognise that they do something bad, but also have a sympathetic side. That’s the power of film, you can see more. I chose a guy with a sweet smile and lovely kids, because I need you to love them at the same time that you recognise they’re doing terrible things. You can only understand that balance in cinema.

Do you think the two sons offer two alternative paths? One joins a military camp, the other seems to pursue a more academic life?
This absolutely shows that there’s still hope. The society has schools, at the same time that they have Jihadi camps. One son, even if he’s not released from the ideology, is more free of the violence. I hope that his children will have a better life, that they have the freedom to choose a life other than one of Jihad.

What people do you want to take away from this film?
There are a lot of things you can take away, I want people to think about the children who grow up in this society; how they’re trained, what their legacy of violence is. How can we avoid children from reckoning with that legacy? If we manage to do that, we will be able to protect the next generation from being stolen by chaos.

Of Fathers & Sons is in cinemas from 16th November.

Linkedin
RELATED ARTICLES
OTHER ARTICLES
The demonstration took place this week over plans to slash £50m from arts bodies in London.
As the cost of living crisis bites, letting go of treats to keep us going is proving difficult – but we should’t just blame ourselves for our financial worries.
How the sounds of nature, air force bases, walking across the country, Windrush and synthesisers have influenced one woman’s journey through music and life.
Meg Handler’s photos capture diverse groups of New Yorkers coming together for the collective cause of civil rights.
A new exhibition is marking the photographer’s 100th birthday with a look back at his extraordinary career.
Hackney Bumps is a DIY sanctuary in the heart of East London, home to a thriving diverse community of skateboarders – and beyond.