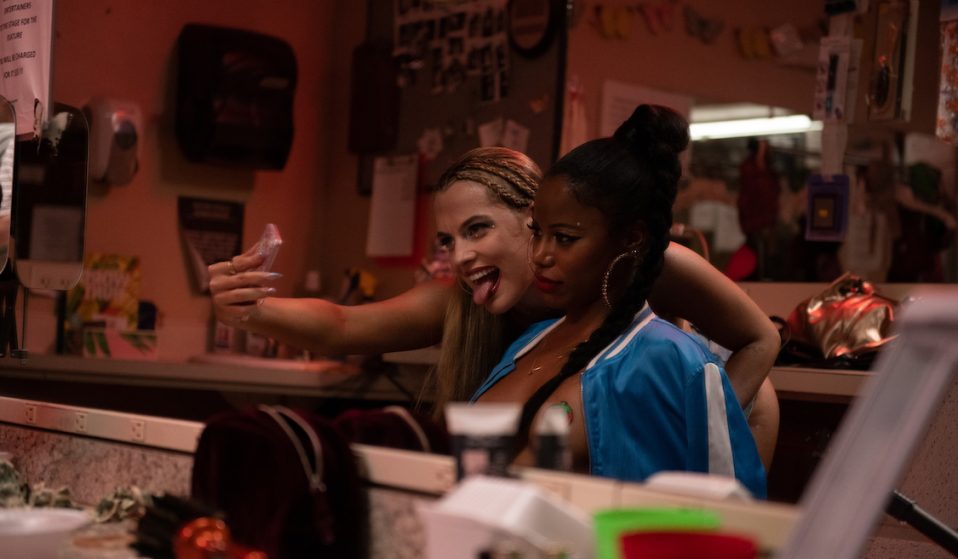 The filmmaker discusses how she came to direct her much-buzzed movie based on a riotous Twitter thread and why race is at the heart of the story.

The filmmaker discusses how she came to direct her much-buzzed movie based on a riotous Twitter thread and why race is at the heart of the story.

In October 2015, Aziah “Zola” King published a 55-tweet long thread on Twitter, detailing the explosive details of a spontaneous trip she took to Florida with a stripper she met working as a waitress at a diner. King’s online epic was filled to the brim with the illicit, the taboo, and the riotous: from prostitution, murder and attempted suicide to a code-switching, nameless pimp, the thread jumps off the page, primed-and-charged for cinema.

And so, the big sharks of Hollywood circled almost immediately: by February the following year, James Franco was attached to direct a film adaptation, with a screenplay adapted from David Kushner’s expansive Rolling Stone feature interviewing the thread’s key players. But the script was shelved a couple of years later in the wake of the sexual misconduct allegations levied against Franco; soon after, it was handed to A24, with filmmaker Janicza Bravo lined up to direct.

From her daring formal inflections to the compassion she has for her real-life characters, Bravo’s resultant vision feels so singular that one simply can’t imagine it in the hands of another filmmaker. A new cinematic wave has emerged over the last half-decade or so as the industry tries, more and more, to contend with our new, hyper-digital age, and few have got close to the rich idiosyncrasy, and delicious metatextuality, of Zola. To appropriate some online lingo, Bravo understood the assignment.

Huck sat down with Bravo at Sundance London in July to talk about Zola’s beginnings, pioneering the Twitter adaptation, and why the film is, while it might not be immediately explicit, all about race.

The film is very much grounded in the digital sphere – but you shot on film, giving it this very grainy, analogue feel. What was your intention there?

Film is very generous. It’s very generous on skin, it really rounds things out, and it makes everything just look better. Digital can’t compete with that. Now, the world of the movie is incredibly digital, but to cement it in a film space also imbues what actually happened with value.

I had this thought that the real Zola – I wanted her to know that her voice mattered to me. I wanted her to know that her ability to tell a story, and to tell it as well as she did, had value. And there was something about being able to work with a tangible material, right, that you could walk away being able to hold the film, that felt really important to advocate for.

How did you come onto the project?

By the time they worked out the IP rights, they already had five bidders on the table – studio level bidders – and I just couldn’t compete at that level. So I wasn’t part of it. But two years pass, it has a director, writers, and there’s another script. The director before me steps down…

Yeah, it’s James Franco. And this is before his ‘Me Too’ stuff comes out. But it’s important for me to say: I think right before I went to Sundance, there was this better narrative, the more clickable narrative, that the Me Too stuff came out about him and they found a Black woman director to do it. But that takes away how hard I worked for it.

Yeah, I’m just like: no, but I really fuckin’ sweat. You know, I auditioned for this for three months. I got it, and I earned it.

I listened to another interview in which you speak very candidly about how protective you feel over the film’s characters, and your concern that another filmmaker could mishandle them. Where did that come from?

When I read the Twitter thread my immediate reaction was: ‘Who is this? Who the hell wrote this? Who writes like this?’ This language that she uses, it’s fucking magical, I don’t have a cooler way of describing it. It’s so idiosyncratic, it has so much character, it’s colourful, and it’s just delicious. So I went on a dig for as much as I could find. And, as it turns out, a 19-year-old Black girl who worked at Hooters in Detroit wrote this.

It seems like ripe grounds for exploitation, right? You know, someone puts out a Twitter thread, it’s picked up by Hollywood…

But it’s also a Twitter thread about exploitation. So they’re like, ‘We’re gonna exploit you, and there’s room to have your voice and agency taken from you, here.’ But we can’t do that. I’m referring to myself as ‘we’, but also whoever I’m in business with: if we’re making her [Zola’s] story, we have to include her, we have to credit her, we have to keep reminding journalists who are interviewing her, and us, that she is why we’re here. I think women are particularly taken advantage of, too; not least women of colour, queer people.

I’d also had this thought – maybe this is a little ridiculous – that if someone else’s story is going to be adapted from Twitter, or a series of Instagram photos, or whatever other social media platform: what if we got to be the example? What if we got to be the example of what you’re supposed to do? How radical would it be to be the example for the next person, who can look at our film and go, ‘well, she got a “story by” credit in the opening of the movie, or she got an executive producer credit, or she was at Sundance on the red carpet.’ 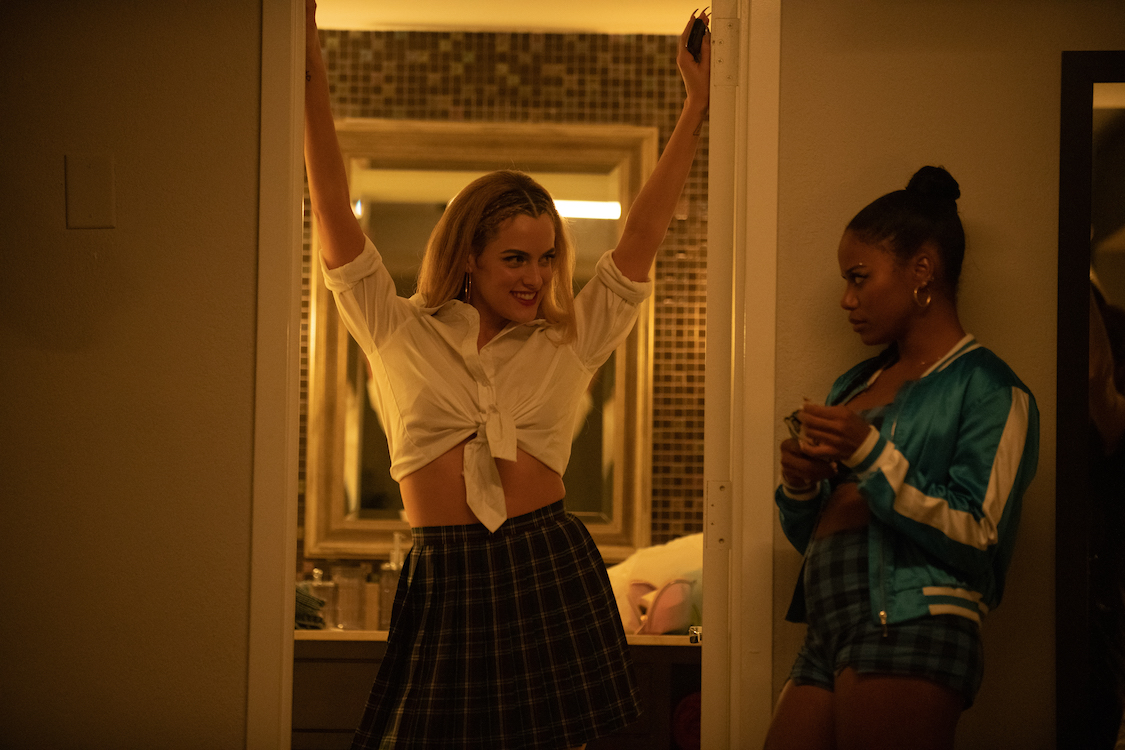 Dotted through the film, too, are these sequences incidental to the central narrative, which showcase America’s history – and present – of systemic racism. Why was it important to include those scenes?

She told the story in 2015. In the US that year, specifically, there had been a handful of very public slayings of Black men at the hands of the police. It was on the cover of Time. The whole film is meant to feel like a time capsule, it’s meant to feel a little bit like a period piece; I know 2015 isn’t that long ago, but it does feel far in some ways…

Yeah, and that’s a different world, in a way. I kept thinking, if the movie is found in twenty or thirty years – if it just disappears, and nobody cares about it, but someone finds it on a shelf somewhere – I want them to know what that year was like, and want them to be able to look at that year, and know all of these things were happening at the same time.

While it wasn’t something that Zola had alluded to, necessarily, the whole story that she is telling is actually a story about race. It is a story about how Black and white interact and intersect. So it felt necessary to remind our audience that this was also here, right? While this isn’t a story about police brutality, nor about the Confederacy, these things are happening in parallel.

You shot the film in 2018, a few years prior to the huge resurgence of Black Lives Matter, and this global response to the violence committed against Black people. Does that make those aspects of the film more resonant?

We premiered in January of 2020, and I remember going into the festival with a couple of my partners, and them feeling like: ‘I don’t know that all of the points in this movie are going to land for people.’ But I felt confident in my thesis. Then there was this racial reckoning last summer in the US, that I think had been brought to the world stage.

Some partners said that the world the movie is going to come out in is going to be more attuned to what you’re talking about. I think that what they were saying – and I said this back to them, and I don’t mean this aggressively – but the world that I told this movie in, and the world as it comes out, it’s the same world for me. It’s just a world that now you’re aware of, right? And again, this is about Black and whiteness. As a white person, I think you feel more racially attuned. But I’m living in a Black body, and I have no choice but to be engaged.

Zola is out in UK cinemas now.

Linkedin
RELATED ARTICLES
OTHER ARTICLES
Activists and campaigners are fighting back against new laws that would seriously undermine the ability to take industrial action, calling it an attack on fundamental workers' rights.
Yohon Tatum, aka Legendary Father of the House of Tisci, reflects on nurturing a new generation of talent.
A new film from Berghaus traces the story of Adam Raja, who left behind a turbulent upbringing to discover the healing power of climbing.
Zsófia Sivák’s ongoing project documents the country’s tavern culture, preserving a once defining part of rural life.
A new podcast is opening up the conversation between trans women and trans amorous men in the hope of building coalitions.
Campaigners reflect on what the supreme court’s decision to allow buffer zones in NI means for the future of reproductive rights in the UK.