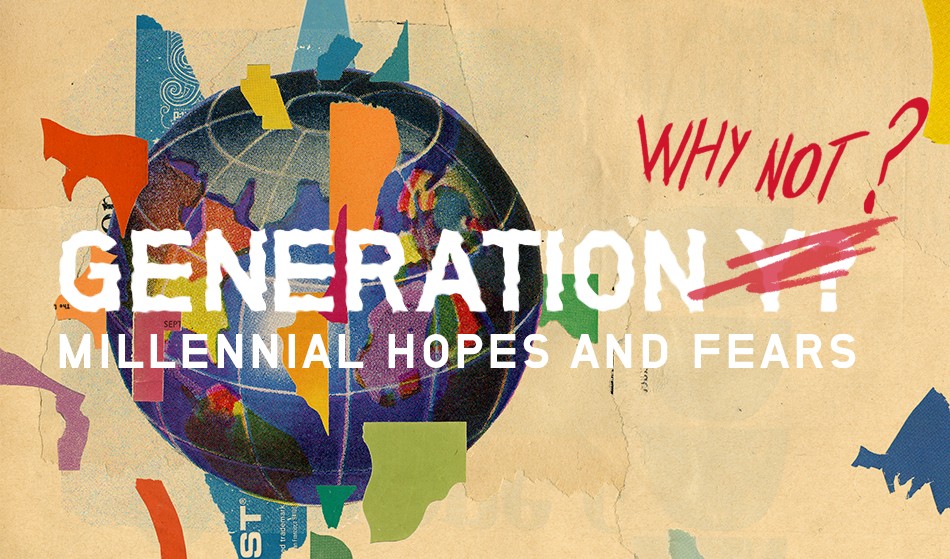 We've faced our demons and come out fighting. Even Trump can't get us down. Join us as we close off Generation Why Not - our series on millennial hopes and fears - with a celebration of people power.

We've faced our demons and come out fighting. Even Trump can't get us down. Join us as we close off Generation Why Not - our series on millennial hopes and fears - with a celebration of people power.

The future is not an abstract concept when it keeps you awake at night. There are all kinds of things to fret over, when you really care about where you’re heading. We’ve been contemplating these fears all week long at Huck and it’s led us to some interesting places – from entrepreneurs who struck out on their own to people pushing past their own inner-demons.

But stories of success and personal triumph can only distract us for so long when the widening cracks of global crises creep ever closer towards our feet. It’s easy to feel small and insignificant when the issues we care about seem insurmountable. But here at Huck, we believe in small. In fact, we fucking love it.

In this three-part series, our optimistic guide to the future, we’re throwing our collective fears at two guys who also believe that little steps lead to big things.

Ed Gillespie and Mark Stevenson are both future ‘possiblists’, drawn together through their respective work in cultural change, as well as an inspirational and occasionally irascible belief in building a better tomorrow.

They’ve introduced us to people and projects that are working to save our planet by staving off water crisis, climate change and what feels like an impending apocalypse.

Now we’re busting out the big guns and talking dystopia and Donald Trump.

5. Responses to events like the Syrian civil war, the Paris attacks and climate change suggest there are so many conflicting perspectives around the world, coloured by culture, religion, proximity. With our understanding of the present so fragmentary and conflicting, is there any chance of creating consensus around change on a global level?

We are in transition. Martin Luther King suggested that the arc of history is long, but that it bends towards justice. We are on a trajectory of ever-greater human identity and alignment, from family to tribe to village to city to region to nation… and ultimately to a planetary state of philosophy, perspective and consciousness. This may seem far-fetched but it is hard to appreciate a paradigm shift when you are right in the middle of it!

We are exponentially accelerating our degree of connection with one another. There are around 3 billion people online now, there’ll be 5 billion by 2020 and everyone online by 2025. It’s one of the reasons the world is getting less violent. I know: you think we’re crazy, right? But the figures speak for themselves and they speak volumes. The news justifiably concentrates on the terrible violence that still besets us, but that doesn’t invalidate the underlying trend: violent deaths are declining worldwide.

Why? Because talk, trade and the sharing of culture across boundaries joins our fates together, giving us less incentive to kill each other. It’s what American philosopher Robert Wright refers to as the “non-zero-sum game,” by which he means “just because I win doesn’t mean you have to lose.” Wright’s argument is that “through technological evolution, new forms of technology arise that facilitate or encourage the playing of non-zero-sum games involving more people over larger territory.” This technology includes agriculture, urbanisation and, of course, communication. Technology helps us create a worldwide park and café. Slowly we’re playing a bigger “non-zero-sum game” with more and more of us involved. It’s one of the reasons ISIS can never win: they’re on the wrong side of history – and that’s what scares us so much about them.

6. Will democratic systems become less and less participatory? And are we going to live in some dystopian near-future run by absolutist feudal rulers (a la Trump)?

Er, most people already do. There are still only twenty ‘full’ democracies in the world, home to just twelve per cent of the global population – and those democracies aren’t all that hot on delivering for their citizens either. The social contract of democracy seems to have been defaulted on, as wealth and power pools in fewer and fewer hands. Inequality is rife, while the financial system is unaccountable. It was good when it started but, to be honest, democracy’s performance is ever-weaker. If democracy were a band, it’d be Guns N’ Roses.

This is a breeding ground for polarisation. In the US, Democrats and Republicans are more ideologically opposed than they have ever been and their opinion of the other party has become much dimmer over the last two decades. Each side thinks the other is full of idiots. You couldn’t imagine two more polarised candidates in Trump and Bernie Sanders.

There is hope, however. Many cities are embracing ‘participatory budgeting’. Citizens are invited to take part in deciding how their taxes are spent in a detailed budgeting process. The good news is that it really works, despite politicians’ fears to the contrary – delivering better outcomes across the board (say the World Bank) – including, for instance, reduced infant mortality (as citizens prioritise healthcare and sanitation). Politicians who champion it are more popular and citizens are, get this, happier to pay tax. Think about that. If you’re a politician, participatory budgeting increases your popularity, gets your voters to pay more tax and saves babies’ lives. Politically speaking, it’s not far off magic.

There are an estimated 1,700 local governments in more than forty countries using the process in one form or another. In December 2013 the White House identified participatory budgeting as best practice, including it as a cornerstone of the Open Government National Action Plan. Paris has just finished the first round of its Budget Participatif (in which 40,740 citizens voted on how to spend €20 million, with another €400 million to be decided on by 2020) and New York City is kicking off its sixth year of citizen consultations (now involving twenty-eight city councils, up from just four in 2011). Madrid has launched a €60 million participatory budget for 2016.

Churchill may have been right when he said, “The best argument against democracy is a five-minute conversation with the average voter”. Participatory budgeting is a door you can walk through, if you choose, to become an un-average voter. By the same token, politicians who walk through that door have to be prepared to get down and dirty with their constituents, with real money on the table – and then make sure what’s agreed is actually delivered. Unsurprisingly it seems to make them better at their job, and more popular as a result. As a counter to our existing politics it’s hard to beat – and it’s growing.

Democracy’s problems will only be solved with more democracy. Throw off your party allegiance and get down to your local participatory budget. And if there isn’t one, surround yourself with politically diverse voices and collectively demand it.

Read parts one and two of The Optimist’s Guide to Tomorrow.

Linkedin
RELATED ARTICLES
OTHER ARTICLES
Social prescribing connects people with non-medical support to improve their health and wellbeing – but some experts worry it’s just a stick plaster solution.
A new podcast is opening up the conversation between trans women and trans amorous men in the hope of building coalitions.
A new law change is enabling Britain’s donor-conceived children to know the truth about their origins – but campaigners say the fertility industry must do more to protect people.
Following the release of his debut single, Deyaz talks battling addiction, dealing with his struggles through music, and building a budding music career from his living room.
Photographer Sean Maung reflects on documenting a small town in Pennsylvania afflicted by high levels of unemployment, poverty, violence, crime, and addiction.
The action took place in response to the 200 asylum-seeking children who were placed in hotels run by the Home Office who have gone missing.