Art & Culture / How photography shaped US protests over half a century 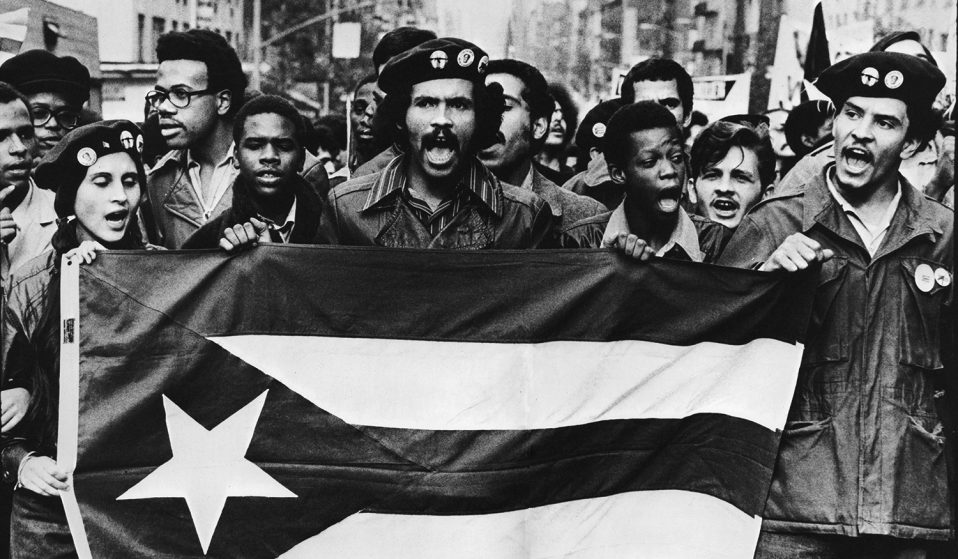 A new book considers the crucial role of photography as a weapon in the fight for freedom and justice.

From the Civil Rights Movement to Black Lives Matter, a new book considers the crucial role of photography as a weapon in the fight for freedom and justice.

Protest is the very foundation upon which the United States was built. In demanding the government answers to the people and not the other way around, it is vital to a functioning democracy and at the core of the First Amendment.

In 2020, protests feel particularly ubiquitous; spurred on by the Black Lives Matter Movement, which has since become one of the biggest global civil rights actions in the history of the world. The protest movement as we know it today began with the 1955 lynching of Emmett Till — his killers declared not guilty the very same day Breonna Taylor’s would some 65 years later.

“Nobody’s free until everybody’s free,” activist Fannie Lou Hamer famously said in a 1971 speech. It is a principle at the heart of Picturing Resistance: Moments and Movements of Social Change from the 1960s to Today (Ten Speed Press), a new book by Melanie Light and Ken Light. 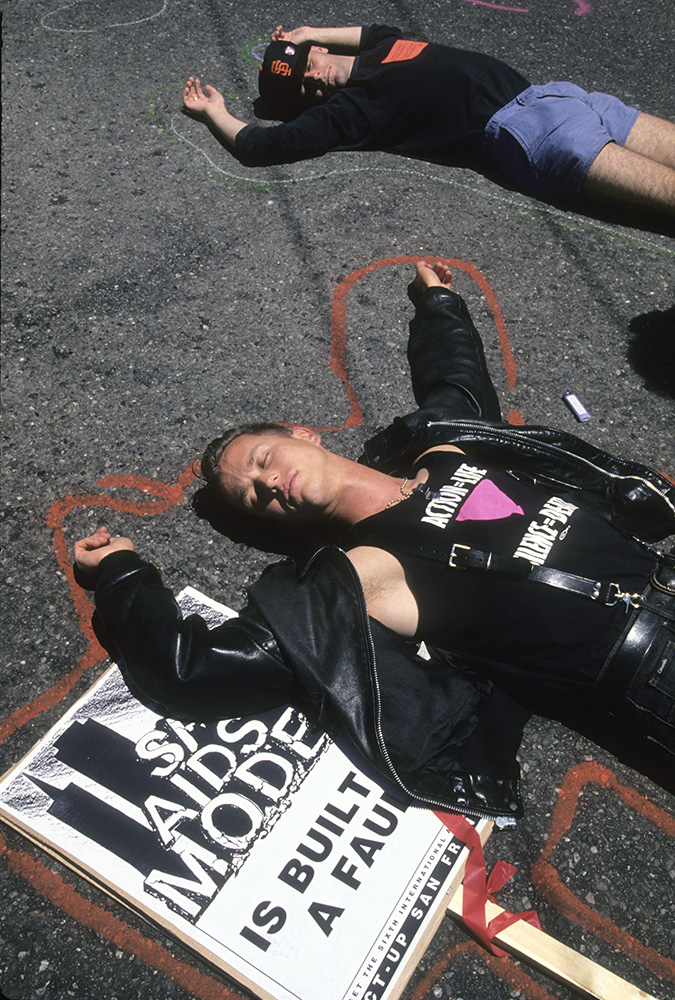 ©Alon Reininger/Contact Press Images. Members of ACT UP at a “Die-In” during the Sixth Annual AIDS Conference, San Francisco, California, 1990.

An illustrated history of six decades of protest in the United States, Picturing Resistance brings together the work of photographers including Dorothea Lange, Danny Lyon, Joseph Rodriguez, Peter Hujar, Janet Delaney, Gran Fury, among others, to explore how photography and art has shaped protesting over the years.

“In America, the Black community has been at the vanguard of making us all free. The Civil Rights Movement (CRM) was the basis for all the movements, because those are universal principles,” Melanie says. 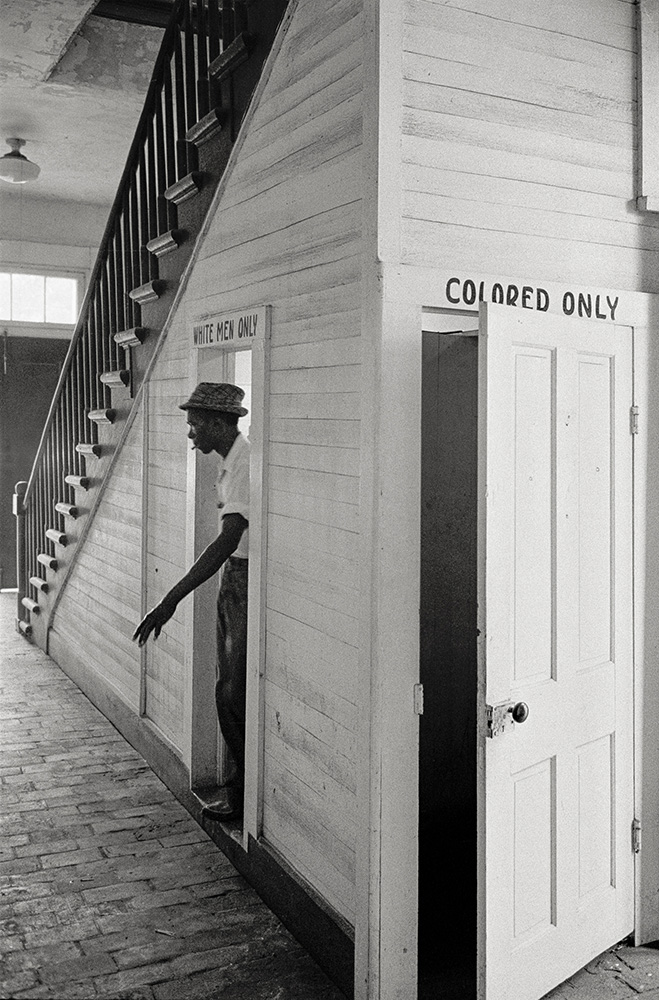 “We also wanted to show that the far-right didn’t just show up one day. It was a very concerted movement of their own that was in direct opposition to the CRM. Where we are today didn’t just happen; this has been a dialectical process for one half a century.”

At the heart of the protest movement is photography, which has long been a tool and a weapon in the fight for freedom and justice. “Photography has an immediacy,” Ken says. “The photographers are witnessing their world and trying to capture inspiring and emotional moments that they can share, that allows a viewer to sit, think, and connect to it. That’s the power of the photograph.” 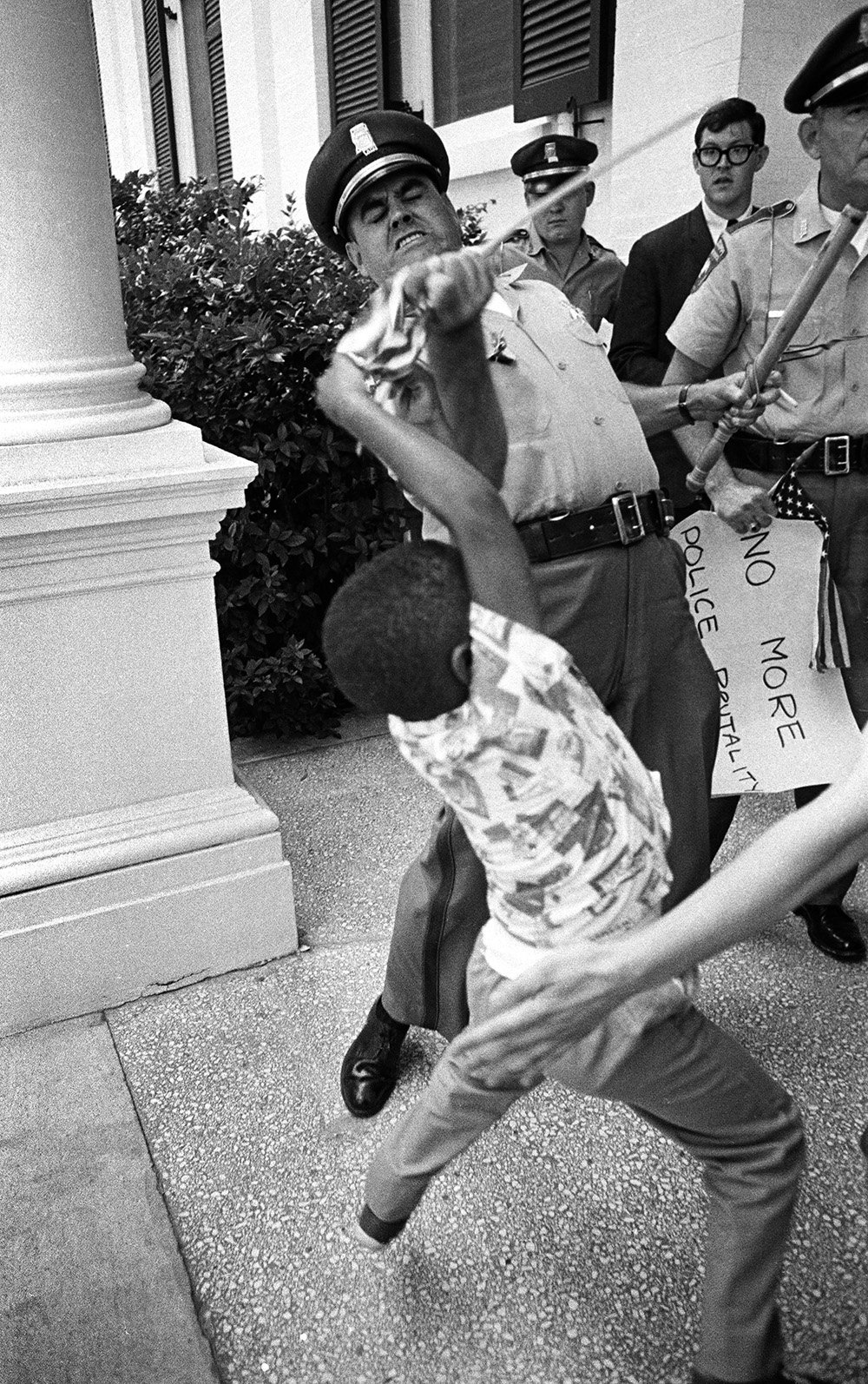 ©1976 Matt Herron. A white policeman rips an American flag away from a young Black child, having already confiscated his “No More Police Brutality” sign, Jackson, Mississippi, 1965.

Picturing Resistance illustrates how issues like healthcare, gentrification, environmentalism, anti-imperialism, and equal rights for historically marginalised groups have been at the forefront of the protest movement for generations. And, the ways in which photography has become an integral part of the historical record.

“We feel strongly that the text and the photographs create the opportunity for young and old people to connect around common, shared goals – particularly now,” Ken says.

For photographers documenting the protests today, Ken advises: “Look at the moment but look beyond the moment at the same time and think about how history will look back at this in 50 years through these pictures.” 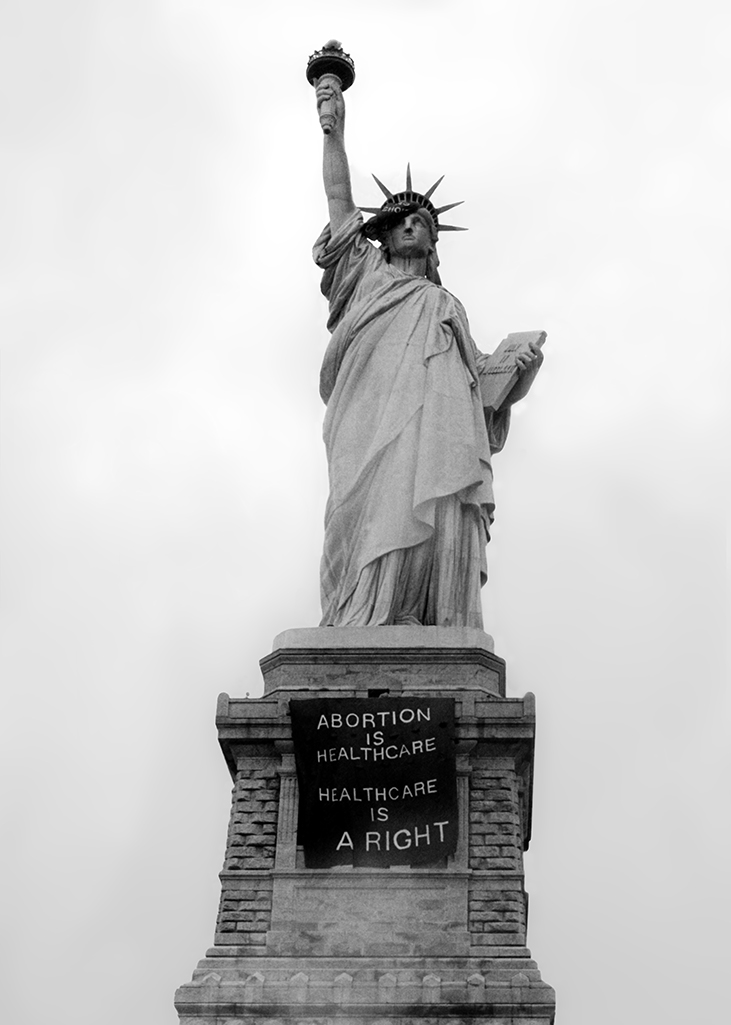 ©Meryl Levin. Activists from Women’s Health Action and Mobilization (WHAM) and ACT UP dropped a pair of banners from the Statue of Liberty, New York City, 1991. 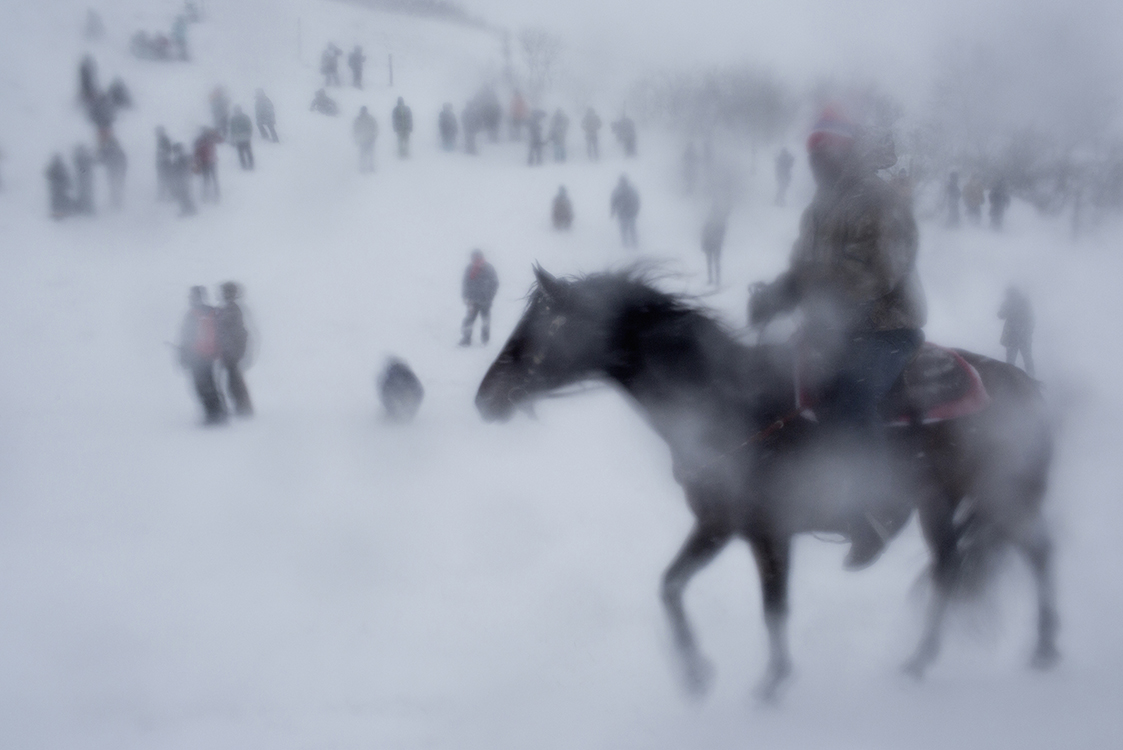 ©Andrew Lichtenstein. Hundreds of US military veterans march through a winter blizzard to the scene of recent clashes with state police and the National Guard after they began to evict Dakota Access pipeline protesters, Standing Rock Indian Reservation, North Dakota, 2016. 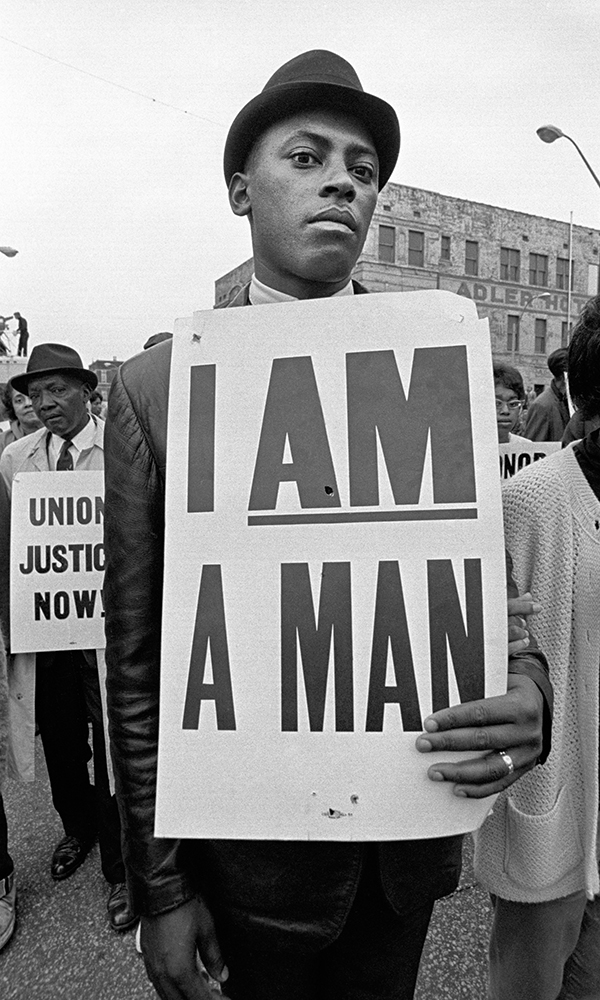 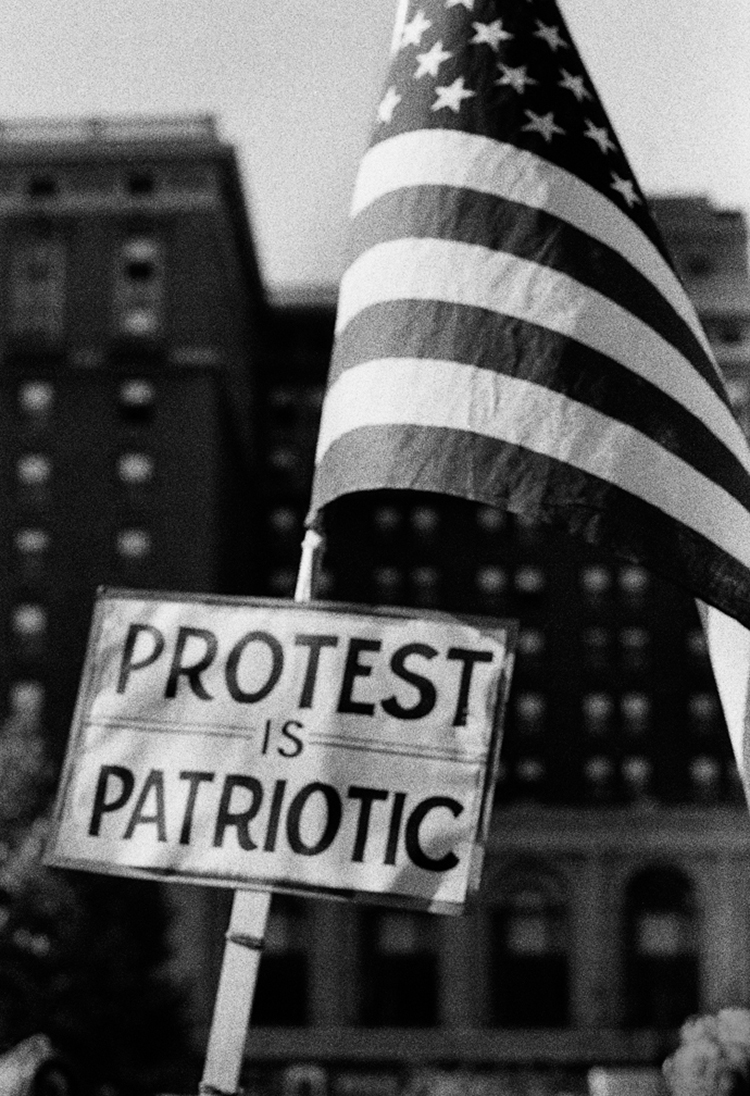 Picturing Resistance: Moments and Movements of Social Change from the 1960s to Today is out now on Penguin Books.

Linkedin
RELATED ARTICLES
OTHER ARTICLES
The first-generation graffiti artist reflects on the tagging’s emergence as an art form and the players who pushed the medium forward.
After fleeing the war in Ukraine, people are finding it impossible to secure affordable and decent housing in the UK.
Zsófia Sivák’s ongoing project documents the country’s tavern culture, preserving a once defining part of rural life.
A group of aid workers face prison for helping to save people fleeing their homes at sea. If they are charged, it will have a chilling effect on humanitarian efforts.
A new podcast is opening up the conversation between trans women and trans amorous men in the hope of building coalitions.
From snake handlers to mardi-gras revellers, Tom “TBow” Bowden’s photos provide a snapshot of the wonderful and weird people who make up America.