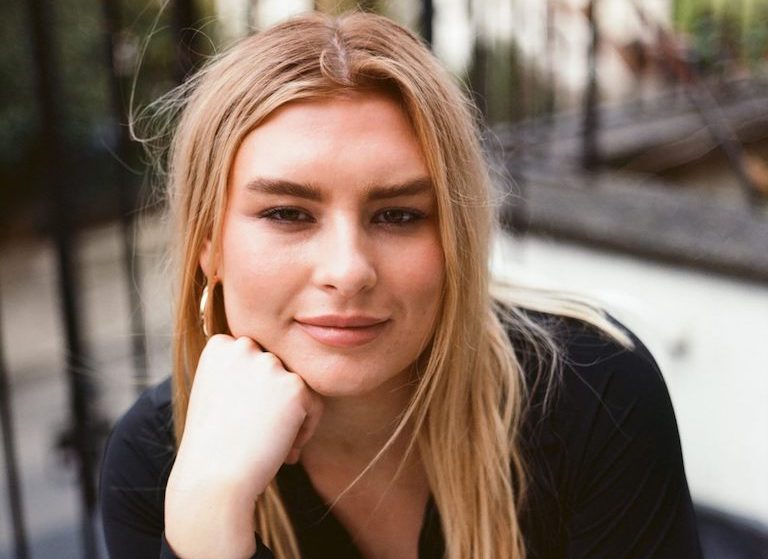 The author discusses the all-consuming nature of heartbreak, and turning the experience into an incisive exploration of love and loss.

To mark the release of her new book, the author discusses the all-consuming nature of heartbreak, and turning the experience into an incisive exploration of love and loss.

The ghost of Carrie Bradshaw continues to haunt any and all writers who decide to pillage their love life for inspiration. Many try and ape her but few approach Bradshaw’s candour, universality and ubiquity in the pages of Vogue. As British Vogue’s resident dating columnist, Annie Lord comes close, while her unflinching personal insights that capture the euphoric highs and crushing lows of modern dating have earned her a cult following of her own.

In her new romance memoir, Notes on Heartbreak, Lord defies expectations of the genre. Her book doesn’t pause for breath or overripe analysis. Notes on Heartbreak is pure chaos, a visceral and unsparingly honest account of her first great love, from the first kiss to an abrupt break-up five years later. It is a memoir about heartbreak that says the quiet bits – all the messy, wounded thoughts – out loud.

Lord spares no detail – the Love Island episodes they watched together, the shish kebabs they consumed, their in-jokes – and invites you to rubberneck. Notes on Heartbreak feels like the culmination of Lord’s smoking-area wisdom and heart-on-sleeve approach.

Lord spoke to Huck about sharing Notes on Heartbreak with the world, finding catharsis and why the best writing is always revealing.

How have you felt doing press for something that was so personal to you?

It’s weird. I’m obviously not a very private person [and] I don’t have much shame in things that have happened to me – even if that’s being rejected by someone or me doing something really embarrassing or bad.

I think one thing that I’ve started to get a taste of, which I can imagine getting a bit weirder, is other people judging [the book] and then seeing me in a certain way, because I might not see myself that way. Normally, I don’t interact with those people, but I suppose I will. Maybe feeling bad for me; that will feel weird. Or passing judgement and thinking negative things. I haven’t had that because, obviously, as a journalist, you write but you don’t hear what people think.

Have you felt any catharsis in turning what was such a difficult period of your life into this achievement?

Yeah, so much! I feel like, through writing it, I processed so much that I don’t think I would have processed at all and they would have been blank spots in my understanding of myself. I was still experiencing it when I was writing it. There were a couple of points in the book when it was really emotional; that was quite easy because I was still feeling that way and I was really angry.

It was funny because when I was writing a certain bit and I knew what I wanted to say I would make myself so angry when I was writing it because I’d get back into that headspace. I wanted to lob my phone across the room. I remember I was rewriting some of the earlier parts and I felt quite healed, so I went on a run and listened to Norman Fucking Rockwell! by Lana Del Rey because I listened to that album so much when I was sad, and it really dropped me back into the feelings of it. I don’t know how I feel about something until I put it on a page so that has definitely helped me process things. Now I just journal loads if I have something that I don’t really understand and I guess the book is almost a journal in a lot of ways.

Did you have a technique for decompressing and taking yourself out of those quite heavy emotions?

To be honest, when you’re going through something as intense as heartbreak, you almost can’t not think about it. In the book I mentioned Roland Barthes who says something like ‘turning away from the pain, you’ll only feel it more’. I couldn’t distract from it, so writing was almost like, ‘let’s just sit in this and get through it’ because when I don’t look at it, I still feel it. At the same time, you can’t sit writing all these horrendous feelings down constantly so I do find that I would write in short bursts, throwing up on the page, and then I’d stop after a couple of hours and I’d get quite tired out from it. 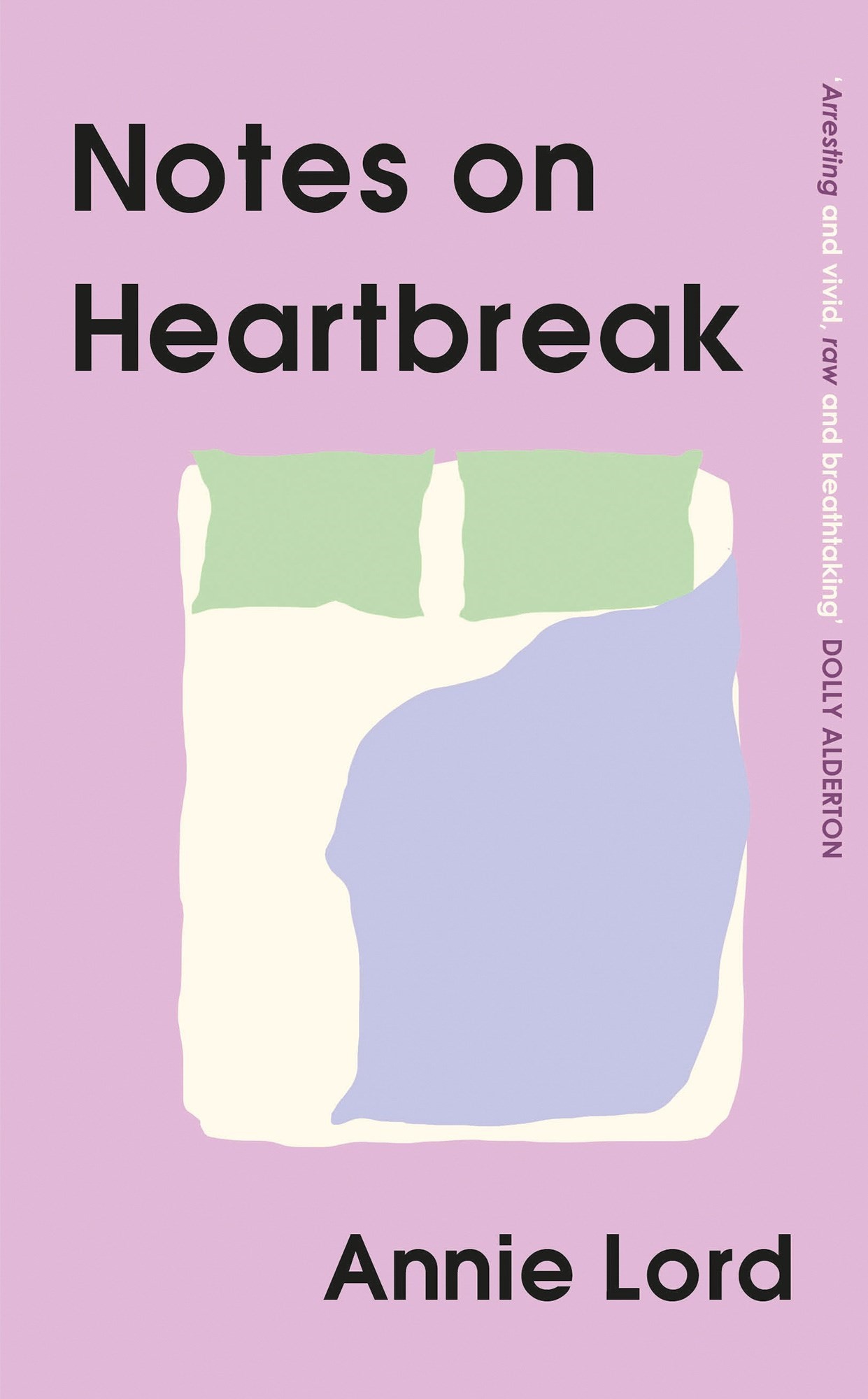 How did you approach the writing process and deciding on the structure? And was it difficult recalling specific details?

I wouldn’t begin with knowing all the things that happened on a day but it’s weird that when you touch on one thing, a sense or something, you just feel like you drop back in there. You can just see everything again. I wanted to get across the bit of the relationship where the mystery is gone, and you know them back-to-front and there’s nothing exciting anymore but it’s nice because you just know each other really deeply. I would think of a memory I associated with that feeling.

If someone looked at my Google Docs they would feel sick because it’s so disorganised and all over the place. It was a patchwork – I’d write down a quote I liked from something I was reading and then maybe I’d have a bit of writing somewhere else, and I just pieced it together. Someone said to me, which I was really pleased about, that it felt like it had been written really quickly, and that’s what I wanted – that it’s a bit sporadic.

What was it like reaching out to people to say, ‘Hey, I’m gonna put you in a book’?

With friends I was nervous because I think that there is an element of personal writing that’s always going to be… not exploitative, because I don’t think it necessarily means in a bad way, but you’re making use out of something like a friendship. It’s turning something into a transaction and it’s weird. You know when people make that joke where they’re like, ‘Oh, you gonna record this? You gonna write about this?’ and then you feel really embarrassed… I hope they don’t think that’s what I’m doing here. I do think people like it because it’s interesting seeing how someone else perceives you – I know I like it.

Were there any moments that you didn’t want to include, that felt too personal?

I always write imagining that no one will read it and I think that’s the best way to do it because otherwise you’re just thinking, ‘Oh, is this cringe?’ or ‘What will people think of this?’ and it really closes you in. The problem when you do that is then the thought of taking it out [of the book] feels so difficult, because those bits that make you feel uncomfortable and exposed normally are the bits that are more interesting. Like with Eve Babitz where [her writing] is so exposing and I think if you took away those elements it wouldn’t be as good.

I remember thinking, I wish I’d done it like Ocean Vuong where it’s fictionalised real life, but I feel like that would take something away in this case because when you are going through heartbreak you feel so alone and I like that someone can read [the book] and be like, ‘that person was genuinely going through that’. There’s also the voyeurism of looking in on someone else’s life and laughing at it.

How does it feel to have such a formative time in your life captured in print?

I’m really pleased because I was processing it while writing at the same time and I think I would have forgotten so many things that had happened. When you feel okay, it’s like everything bad just washes away. Heartbreak feels horrendous at the time and then suddenly you’re okay. I’m glad there’s something where all those horrendously embarrassing, weird, messy, funny things that happened will be there. I think it’ll be funny to read it again when I’m older. You know, when you’re a teenager and you have these extreme highs and lows, I think I almost look back on it in that kind of way, especially now I’m happy. I’m kind of craving for someone to break my heart and bring some drama into my life.

I almost want bad things to happen in life, because you think about what you would write about them. It’s a very strange thing. I almost think, ‘Oh, imagine when I’m 60 and I get divorced and I can write a second one’. It’ll be a mature view on heartbreak. I would love to write about something like that but then I was like, ‘God, why am I fantasising about being heartbroken again?!’ I would love to read a more measured older person’s way of going through the same process.

Notes on Heartbreak is out now on Orion Books.

Linkedin
RELATED ARTICLES
OTHER ARTICLES
The curators of a new exhibition are hoping to shed light on Plymouth’s vibrant but often overlooked nightlife.
Proposals to introduce a minimum GCSE threshold for student loans will disproportionately affect those from marginalised backgrounds.
Photographer David Hoffman recalls documenting the extreme wealth inequality around Tower Hamlets and Hackney int the 1980s.
Freddie Miller’s new series of photographs investigates who today’s trainspotters are and what drives their unfettered enthusiasm.
The singer-songwriter discusses her intimate new project – and the advice she’s picked up across a career as one of rock’s leading voices.
Over a dozen Stop Deportation activists locked themselves to each other outside a detention centre to prevent coaches taking those due to be on the Rwanda deportation flight from leaving.