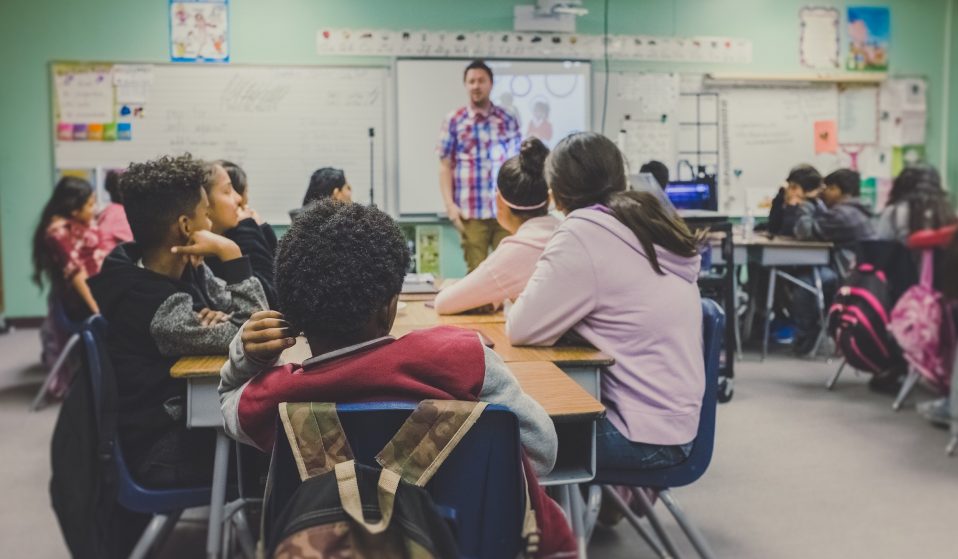 New research has exposed a disturbing campaign to promote vaccine hesitancy among schoolchildren and parents.

New research from Logically shedding light on efforts to promote vaccine hesitancy among schoolchildren and parents has exposed the disturbing lengths certain groups are willing to go to.

Over the past couple of months, stickers with QR codes that link directly to an anti-vax site targeted specifically at children have been appearing outside of schools across the country. In at least one school, children were sent into school with anti-vax leaflets to distribute with the aim of ‘planting seeds’ of dissent among their peers and parents.

These revelations come from a shocking new investigation from fact-checking site Logically, which shows how anti-vaxxer parents have begun coordinating on messaging platform Telegram to fundraise, swap tips and coordinate leafleting of schools. The group was originally known as “Future Z”, but following the publication of the report, has since changed its name to “Schools Working Group”. The group previously had a website under the “Future Z” moniker which has since been taken down, though the organising groups on Telegram remain active with around 1,000 participants.

Nichola Hindle-Marsh, a cosmetic tattooist and beautician from Leeds, has been identified as one of the founders of the group which started life as “Working Schools Group”. It was rebranded to Future Z in May 2021. Hindle-Marsh was found to have set up the group’s Twitter account. She is also listed on Companies House as the secretary of capital management company, Spadina Ltd, which was used to register Future Z’s website. Her husband, Peter Hindle-Marsh, runs the company. Hindle-Marsh was contacted by Logically for comment but did not respond to requests. 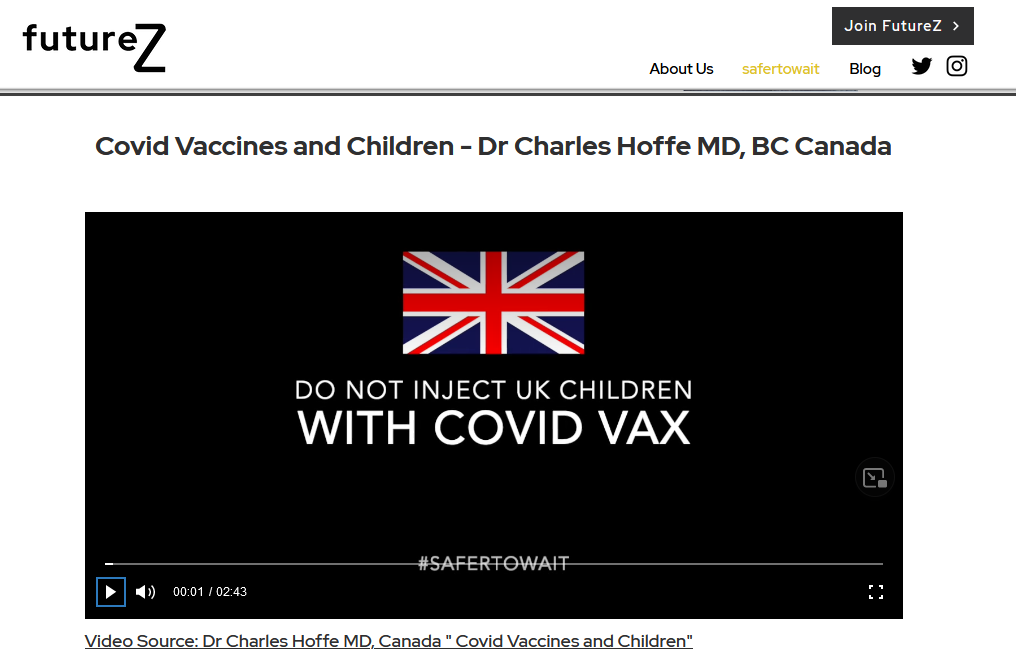 Five per cent of all the messages in the group have been sent by Hindle-Marsh: in them, she can be seen organising Zoom meetings, training members and dealing with general admin. In another series of messages, Hindle-Marsh is shown to have sent anti-vax leaflets into school with her daughter in order to ‘plant seeds’ with other parents and children. The organisation operates from a central Telegram hub with 44 ‘local’ channels, spanning the length and breadth of the UK. Members are encouraged to sticker outside of schools as well as to go on ‘missions’, which are discussed on separate channels. Training is offered for new members.

The investigation revealed no fewer than 32 messages in the main Telegram hub from explicit QAnon groups and figures. There was also significant cross-posting from similar anti-vax and anti-lockdown groups. The hub also saw shared messaging to openly far-right channels, including ex-leader of the EDL Tommy Robinson pages, ‘Pepe’ groups and a “zero tolerance” UK news channel that frequently contains extremely racist content.

Until it was taken down, its website, which could be accessed through QR codes printed on stickers stuck outside schools, described the group as “Filled with like-minded young people, parents and grandparents”. It continued: “We are passionate about giving a voice to young people who are concerned about their school and education […] Together we shine the light on topics of concern that mainstream media and Governments choose not to show.” The description goes on to decry “overzealous lockdown measures” and “obedience culture”.

The site linked to a flyer that could be printed off aimed directly at children and teens which repackaged vaccine hesitancy for younger people. The flyer contained disinformation and hosted a QR code that linked to a page on Future Z’s hosting a video featuring Dr Charles Hoffe, who is notable for appearing on anti-vaxxer podcasts. 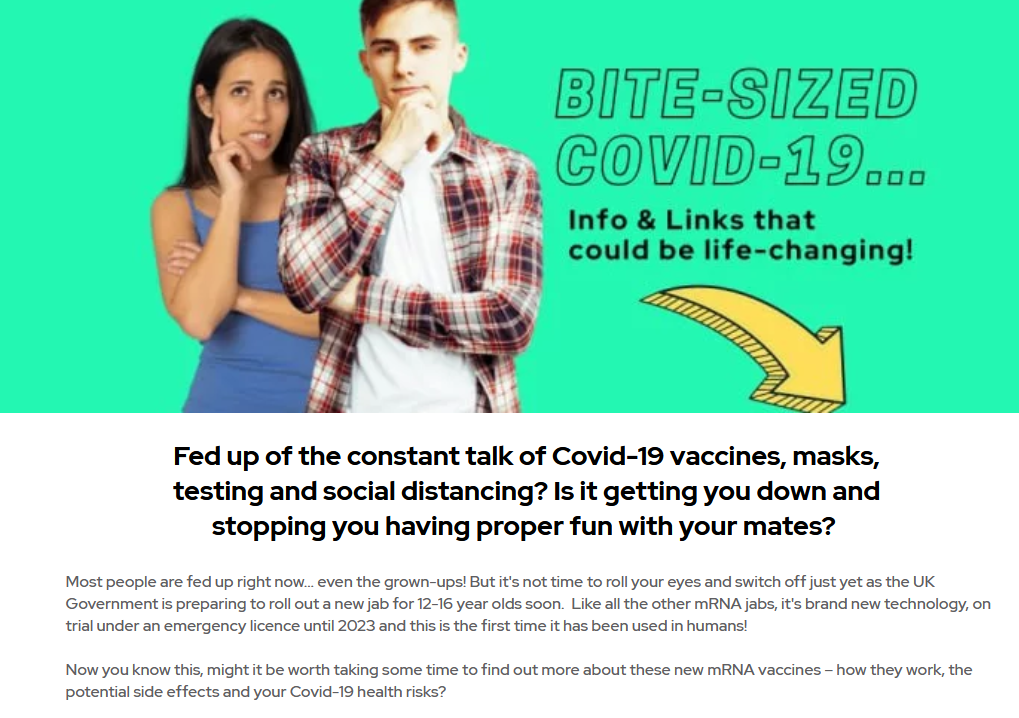 Further pages on the site mimic that of popular revision website BBC Bitesize containing more disinformation about Covid vaccines. The page also contains advice on how children can refuse the vaccine while also falsely claiming that being encouraged by family and friends to get vaccinated constitutes a ‘hate crime’.

Following the pulling of the website and the renaming of the group, Logically have reported that 21 of the 44 group fundraisers are still active, with the groups raising over £12,000 collectively so far for the distribution of anti-vax material to children and young people.

The investigation comes as the UK experiences the highest number of reported cases of Covid since January, with the steepest increase in the number of cases among people under 40. With a push to open the country back up on July 19 and growing calls to vaccinate children, schools and colleges look set to be a key battleground for anti-vaxxers going forward.

Linkedin
RELATED ARTICLES
OTHER ARTICLES
In his 2008 series, the photographer pictured himself as Angela Davis, Martin Luther King Jr., Malcolm X, and other prominent figures.
As the Scottish government announces a rent freeze, an activist with Living Rent who fought and won shares how they did it, and what must come next.
For over a decade, gamblers have won big by employing people to place live bets from the court. But does this dubious method still work?
Yesterday thousands gathered outside Buckingham Palace after news of the Queen’s death broke.
By turning a real-life crisis into daytime television fodder, TV bosses have once again shown themselves to be completely out of touch with audiences.
Following the announcement of an 80% hike in the energy price cap from 1st October, crowds gathered outside the offices of energy regulator Ofgem to protest and declare their intention to undertake a payment strike.