Art & Culture / LGBTQ+ zines from places where being gay is condemned 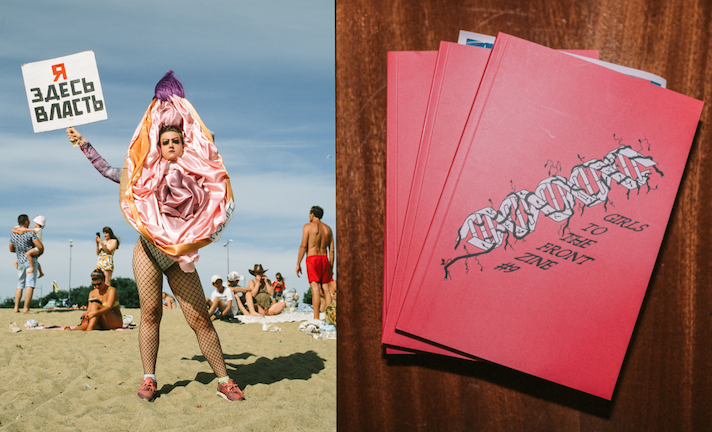 From Russia to India and Hong Kong, we take a look at the zines which are carving out vital spaces of self-expression for queer people in countries where same-sex relationships still remain taboo.

From Russia to India and Hong Kong, we take a look at the zines which are carving out vital spaces of self-expression for queer people in countries where same-sex relationships still remain taboo.

Whether it’s in aesthetic photo journals or defunct erotica zines, LGBTQ+ representation has long existed within underground communities and literary networks. Many of these self-produced passion projects snowballed into cultural game changers and were able to drive home messages of self-expression. Today, that spirit of literary revolution lives on – including in the over 70 provinces globally banning or criminalising LGBTQ+ relationships, where zine networks have become an irreplaceable platform of visibility and representation for marginalised communities.

Across the ’70s and ’80s, zines gripped the UK and US as an outlet to openly share radical ideas and queer representation. From raging Riot Grrrl scenes to the fast-arising new wave of Western feminism, counterculture zines (Jigsaw, Girl Germs, Outpunk, Homocore) became markers of an overdue liberation movement. While over time many physical zines started to phase out, the rise of ’90s queercore and punk zines quickly ushered readers into the online equivalent, with e-zines, blogs and e-forums paving the way for fresh DIY queer content. Now more than ever, it’s possible to find representation and self-recognition in zines around the world.

In a day and age where queerness is still very much under threat, we speak to some of the trailblazing zine creators who are acting as lifelines of queer representation in countries that often seek to erase the rich histories of LGBTQ+ life and culture.

Girls to the Front, Poland

Based in Warsaw and founded in 2015, Girls to the Front is run by Aleksandra Kamińska and Agata Barbara Wnuk, who initially launched the project as an ambitious, music-based print magazine under a different name. It eventually evolved into something much bigger: a zine to challenge Poland’s openly anti-LGBTQ+ presence.

“We first started organising gigs for girls and women because the Polish DIY punk scene is very much filled with cis white men. We [wanted to] spotlight girls and women in music so started making zines, and we also wanted to give more space to queer people,” Aleksandra tells Huck over Zoom.

Inspired by the Riot Grrrl movement, the latest issue, ‘Queer Erotica Zine’, explores the nuances of female erotica, reflecting on the discourse of queer pleasure. Set against the background of the Polish Stonewall last August, Aleks and Agata knew they had to make something impactful.

“We wanted to pick a niche topic and focus on pleasure for a second,” Aleksandra explains. “Then, in August, there were huge protests against jailing a queer activist called Margot and a level of police brutality that’s not usually visible in Poland. So, we’re really glad we steered the discussion into queer pleasures and being part of a community.”

As political tensions simmer in Poland, Aleks is conscious of her privilege living in Warsaw and prides herself on being able to use zines as a way to share stories. “The situation in Poland really fucking sucks but being queer in Poland is not only about being traumatised,” says Aleksandra. “There’s a lot of nice things happening, so I’m hoping, with this zine, we have a chance to reshape the narrative and spotlight the voices that are ignored.” 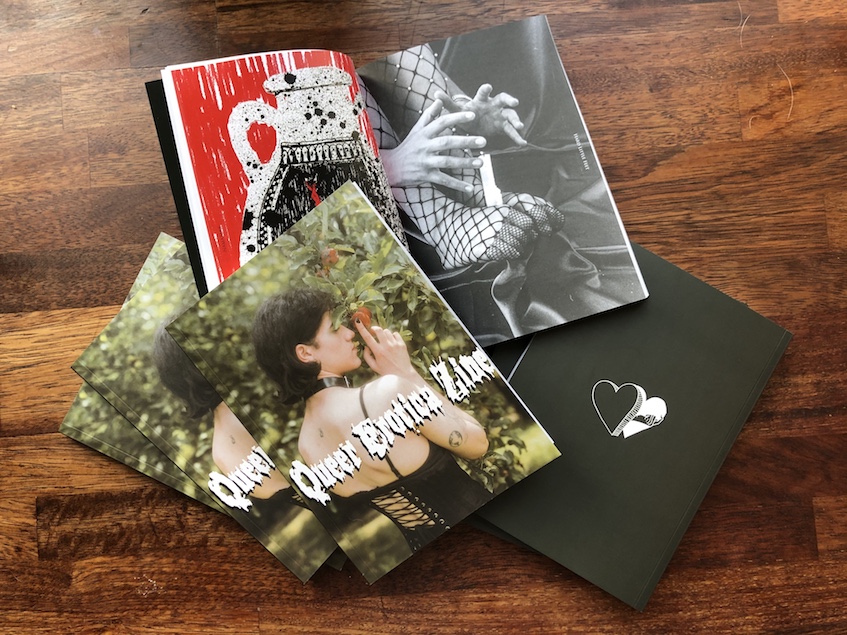 Courtesy of Girls to the Front

Russia has long had a contentious relationship with LGBTQ+ rights and visibility. Founded in 2018, O-Zine (the “O” stands for open”) is on a mission to repaint what queerness in Russia looks like and spread solidarity. Speaking to Huck, co-founder and sex educator Sasha Kazatseva explains why she and Dmitry Kozachenko decided to launch the publication: “Being young, Russian and queer doesn’t necessarily mean pain and suffering but a great deal of joy, pleasure, and beauty,” she says. For the O-Zine team, the publication strives to create a visible space for the community; one which they “dreamed out”.

“People should be informed on violations of their rights, but also they need safe spaces to recover and to feel support and inspiration,” says Sacha. “On a daily basis, most of us need to hide who we are – and it lasts for the whole of your life, creating lots of tension and stress. We are sure that talking about LGBTQ+ people openly, seeing great things they are doing right now helps all of us to feel stronger and to feel empowerment.”

Now, with over 40,000 followers on Instagram, O-Zine are determined to continue pushing the boundaries of what queer, inclusive representation in Russia looks like. “We’re really proud of how we affected coverage of transgender people in popular Russian media,” Sasha says. “Trans people are one of the most discriminated groups within the community, and the media cover them using objectifying, exoticising and non-ethical perspectives.”

While admitting there is still a lot of work to do, the O-Zine co-founder is hopeful zine culture will continue to draw on wide-ranging examples of LGBTQ+ life, particularly from marginalised communities. “We get lots of info about queer-mass culture, but it’s so hard to find something about countries outside Europe or the USA,” Sasha continues. “We’d like to see more authentic stories about people who provide changes in their local communities (even small ones!) all over the world – especially in countries where no LGBTQ+ rights are supported.” 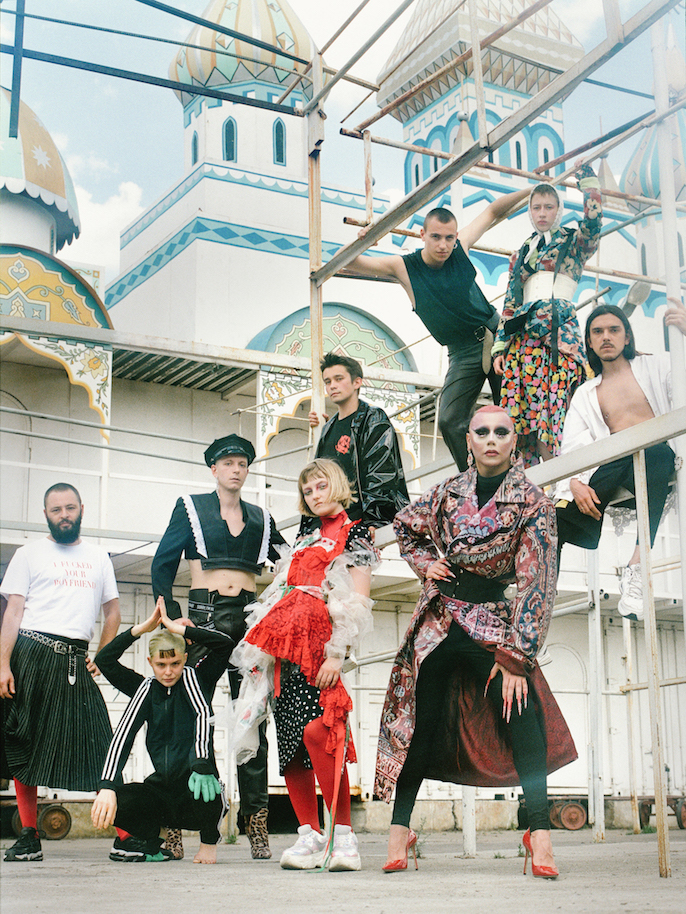 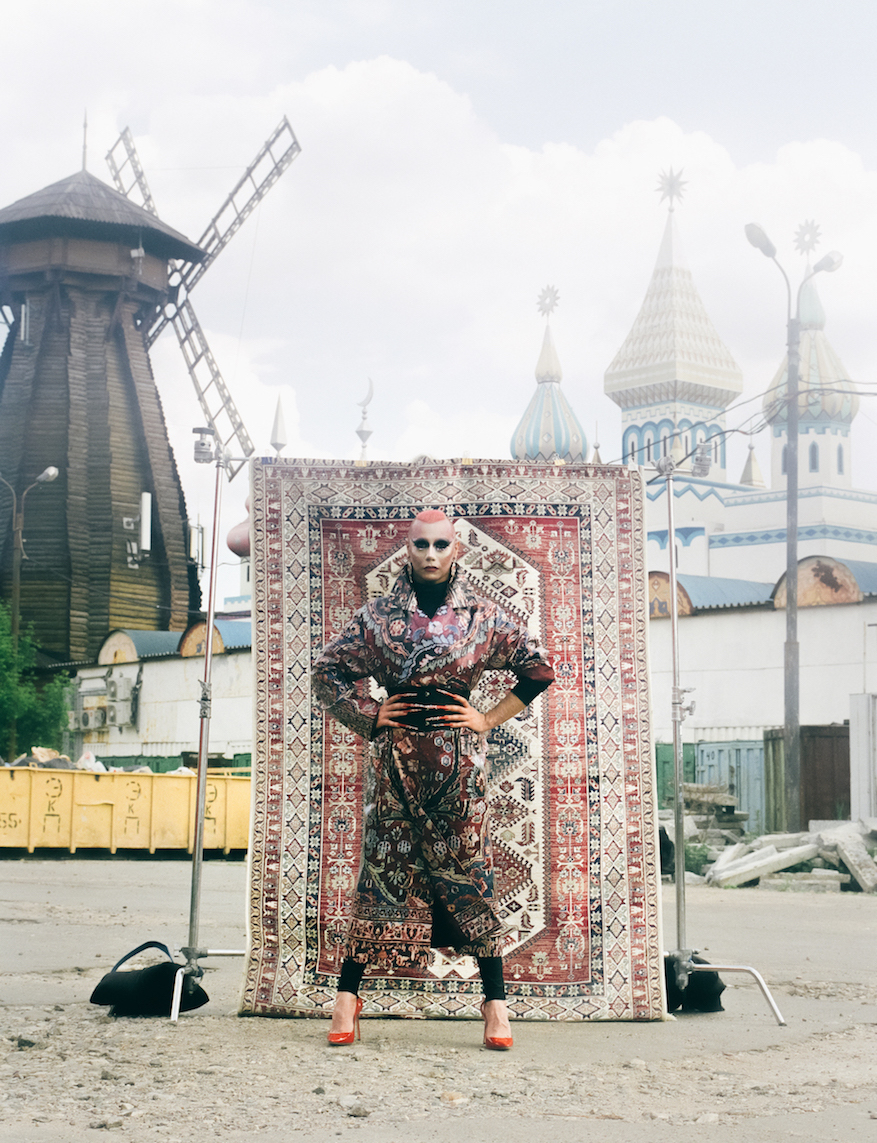 Cold Cuts started off in 2017 as a passion project. Led by Mohamad Abdouni, the zine documents uncovered queer histories across South-West Asia and North Africa (SWANA). What began as a “collection of different pieces, stories, and photos from around the world” swiftly evolved into an LGBTQ+ publication that would fill a dire need for queer representation.

In 2019, the publication started an unlikely partnership with the Islamic Institute of Culture. “It was the first time the Islamic Institute of Culture in Paris opened its doors to a queer narrative or queer story,” Mohamad recalls. While many may be surprised to see inroads being built between religion and the LGBTQ+ community, Mohamad was not. “I think just existing is a form of activism, so I do see Cold Cuts as some sort of activism,” he explains, citing the exhibition as an example of gradual change.

At its heart, the zine celebrates diverse voices and untold stories. “[Cold Cuts] is a documentation of the community from within the community, and that changes things drastically,” Mohamad says. “We discuss a lot of positive things that are usually left out in Western media. When it comes to documenting our queer culture, we focus on families where queer dynamics are respected and where queer dynamics exists in a positive sense.” 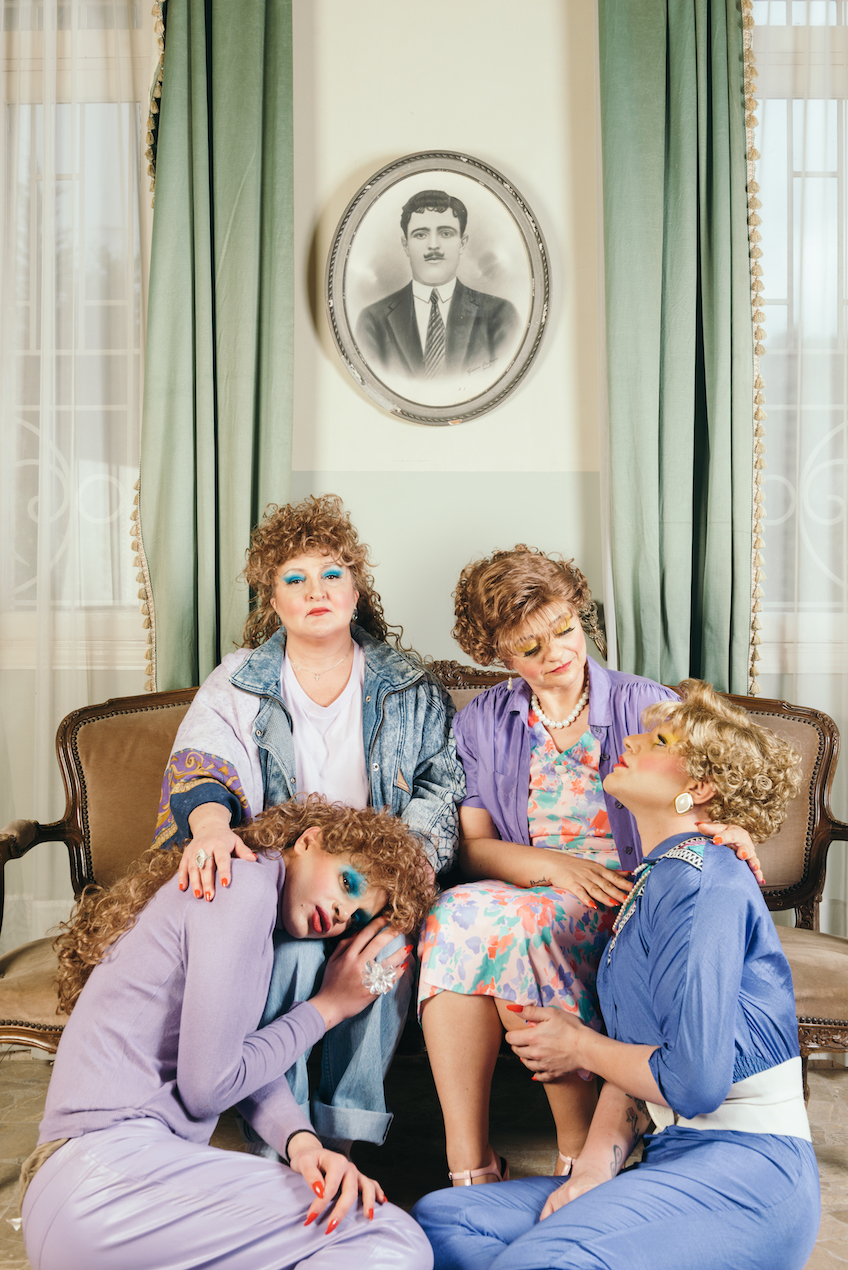 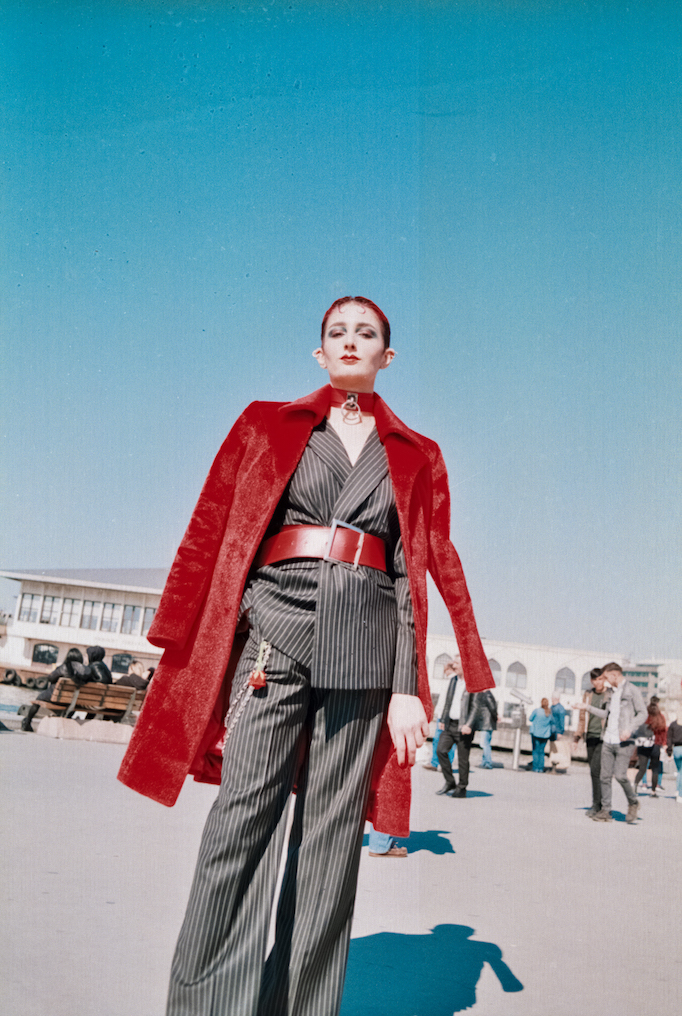 Photograph of Altin Tatli, courtesy of the artist Mohamad Abdouni and Cold Cuts

Based in Hong Kong and first published in 2020, Ourself Zine (我哋) is one of the newer publications on the block. Run by Harmony Yuen and Joce Chau, the up-and-coming zine aims to shed light on intersectional queer experiences, which are not formally recognised in the region.

Late last year, protests gripped the province of Hong Kong as youngsters exercised their rights. During the height of political turmoil, zine culture found itself caught in the middle. With protesters strategically swapping communication channels, protesters found themselves trading key information in the format of zines.

“In the debut issue, we were particularly interested in looking at how young queer folks navigate relationships, so we featured couples, friends, and those who are single and enjoy meeting people on dating apps,” says Harmony.

As the editor of Ourself Zine, Harmony wanted the debut issue to be a physical publication, not one that just exists on social media. “We wanted queer voices to take up actual, physical space in Hong Kong,” she explains. “What shocked in 2018 was the decision of local public libraries to take queer-themed children books down the shelf.”

The removal of LGBTQ+ literature from public spaces was something Harmony found difficult to process and it has inspired the direction of the new zine. “I want Ourself Zine to invite a beam of light into the less illuminated places of our society,” she says. 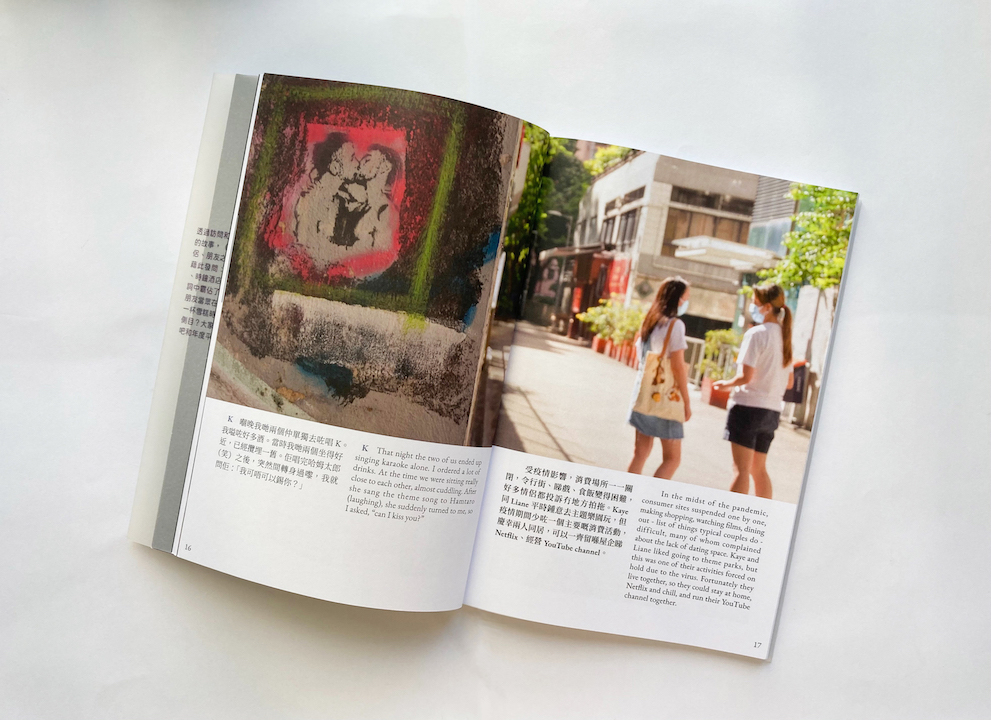 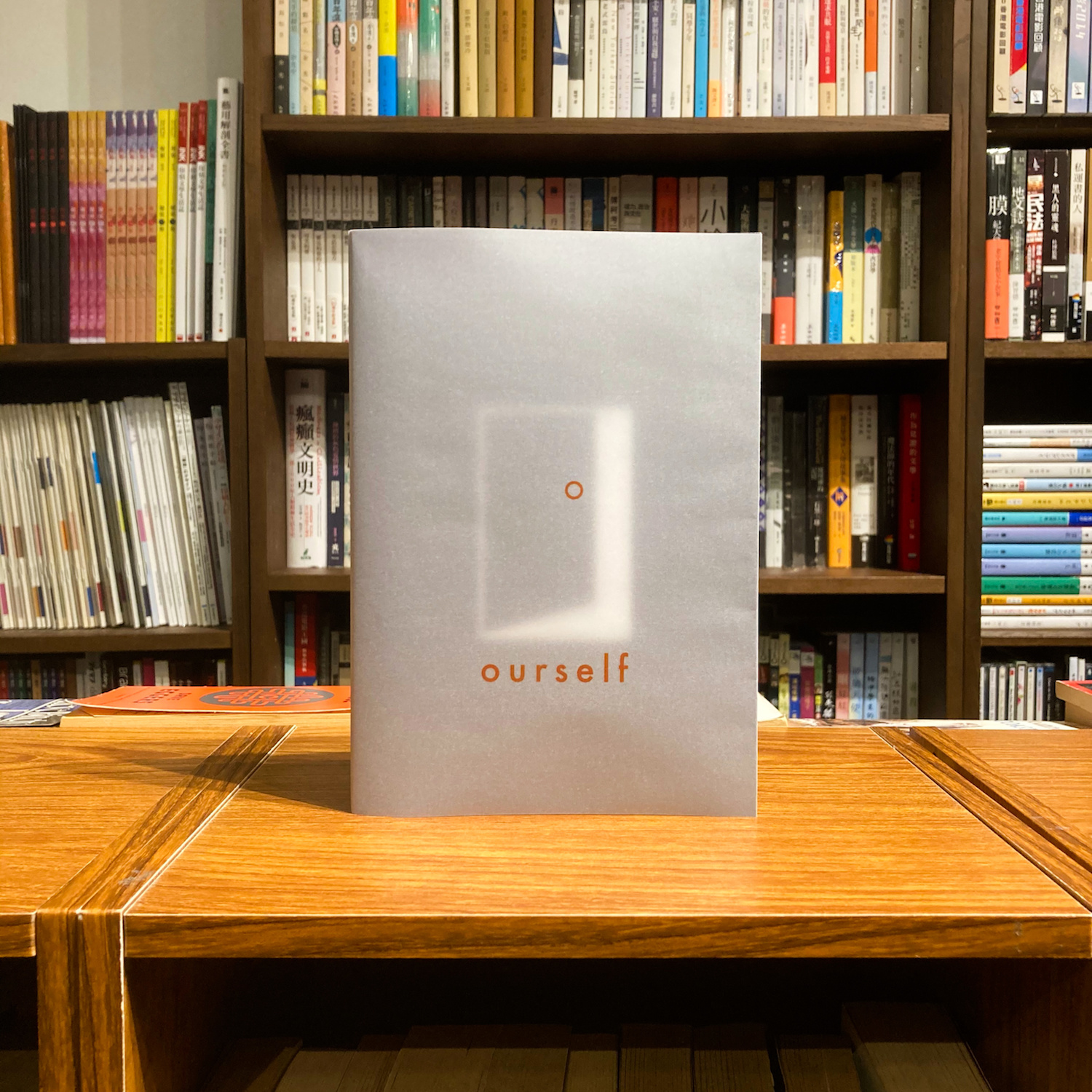 Founded in Mumbai in 2008, Gaysi emerged as an incredibly popular outlet for queer content online among the Desi community. After building a considerable following, the platform launched its first queer journal in 2013, titled The Gaysi Zine.

Gaysi has since published over 40 issues with the aim of reaching people living in smaller cities and to encourage inclusions across the LGBTQ+ community. Tackling culturally taboo subjects of coming out, LGBTQ+ dating and religion, the platform across print and online has become an increasingly vital outlet. Alongside the publication and collections of features, personal stories, and essays online, Gaysi also runs workshops and events to foster a greater sense of community.

It’s easy to plug into an exclusively UK and US-centric LGBTQ+ landscape — one that celebrates the passing of landmark legislation rulings. Surrounded by Western media, we often might forget about the countries and communities still fighting for their own political breakthrough moments. These new LGBTQ+ zines are able to offer a unique window into global queer communities. Wrapped up in personal storytelling, these zines exist as their own vision of activism. Together, they catalogue overlooked LGBTQ+ histories and reclaim diverse queer experiences inspired by the past and present.

Linkedin
RELATED ARTICLES
OTHER ARTICLES
Ahead of the policing bill reaching its final stages in the Lords, protestors came together to rally against the legislation.
The musician, DJ and founder of Monika Enterprise reflects on a career defined by revolution and rule-breaking.
From Brooklyn gang members, to Welsh miners and the residents of East Harlem, Bruce Davidson used his camera to shine a light on the most marginalised.
While the popular news aggregation service has been kicked off Twitter, its demise does not spell the end of digestible misinformation.
A new book traces the legislation’s tumultuous history and the lasting impact its had on LGBTQ+ activism today.
In 1984, Martin Shakeshaft set out to document the miner’s strike as it really happened, using his photography as a tool for activism.