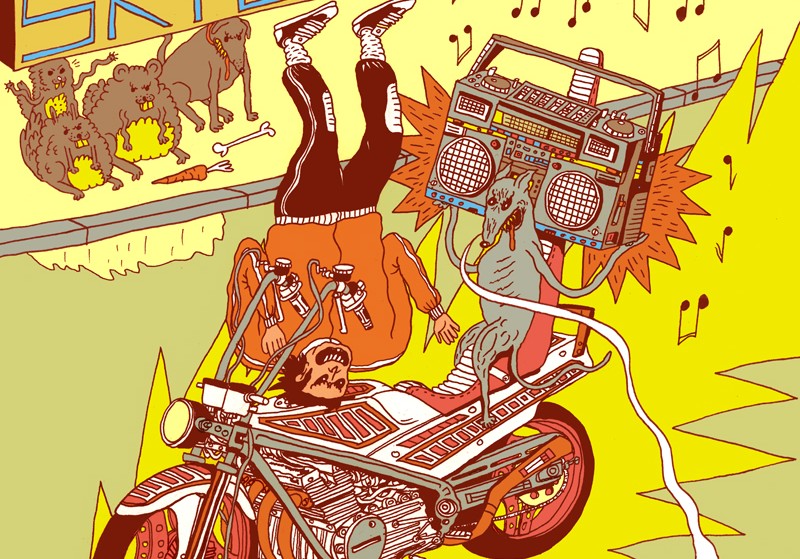 Machines, freaked out beardy daddies and gore are the subject matter for the UK-based artist who has been popping up at the unexpected intersection of motorbikes, skate and surf culture. We shoot the breeze with Maxwell....

Machines, freaked out beardy daddies and gore are the subject matter for the UK based artist who has been popping up at the unexpected intersection of motorbikes, skate and surf culture. We shoot the breeze with Maxwell....

In the last few years world wide there has been a cross-fertilisation of the skate and surf aesthetic with the new DIY wave of custom bike culture. Manifestations of this unexpected twist in pop-culture’s timeline have been popping up everywhere – from bike brand Deus Ex Machina’s surf-inspired aesthetic to the hugely popular Wheels and Waves event that dominates Biarritz in the early summertime. Maxwell Paternoster has been front and centre of this scene – producing a huge variety of work for custom houses like El Solitario and brands like Edwin and Element – which have thrown their hats into the ring since the start. We caught up with Maxwell in advance of the launch of a new range of work for Element…

What makes your art tick? Why motorcycles?
Not sure about why motorcycles. I am of the opinion that some psychological stuff that some doctory-type guy could explain could shed some light on why people like certain things, and based on that supposed “explanation” I seem to like to draw machinery related things, like motorbikes, cars, and piles of junk. For me it could be based on growing up surrounded by the machinery of food processing and early exposure to the waste of these industries, and the consumerism of it all. Father worked in a pig fattening unit, and I was there a lot as a kid. Also I was once looking around a chicken farm and I found a pit out the back that contained a rotting plastic wrapped cube of dead chicks, about two meters square. Some of my images can be quite gore-based as well as machine based. But yeah motorcycles are fun to draw! 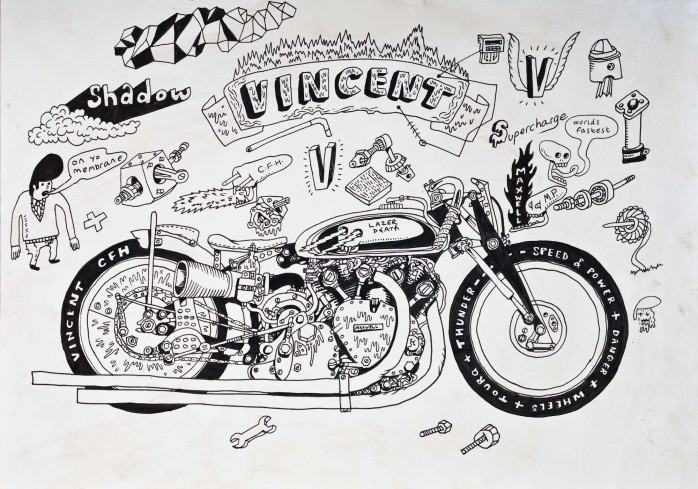 What’s the connection between skate/surf culture and the new wave of custom bike culture?
It seemed a few years ago (in the UK anyway) that bikes were not so connected to skate/surf culture. I suppose it’s the ease of communication through the internet making a scene grow pretty quickly, and one can look at a lot of stuff, meet a lot of people and realise bikes can be very cool and there are lots of people out there to get together with and bike, skate and surf. (I don’t surf, and no longer skate!) I think some of the more mature skateboarders have the capital behind them to afford to get into having a pretty rad bike too, it can be quite expensive depending on how one likes to roll, as it were. 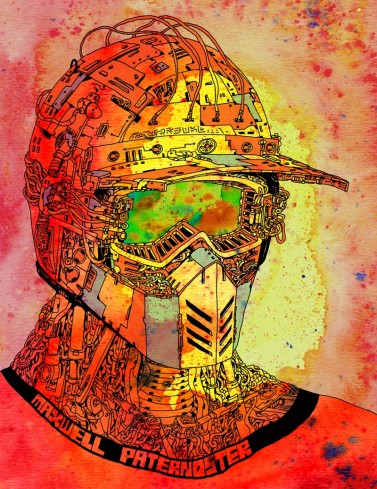 When did you first swing a leg over a bike?
The first actual memory I have of clambering onto a full-sized bike was as a small child. It was not a riding situation, more of a two-brothers-clambering-over-a-family-friend’s motorbike-outside-while-the adults-were-inside-smoking-cigars-and-gas bagging-about-grown-up-stuff situation. At the time the bike seemed humongous. But as I have since discovered from a faded family photo of the steed, the thing was actually a Yamaha FS1E (50cc). Anyway, the bloody thing fell over in the process and adults appeared, surprisingly unfazed by the toppled bike and my brother and I were plonked on the seat and pushed around the garden on it. Anyway whatevs. The folks picked up an old Yamaha 70cc wreck for me to burn around the fields on a few years later, when I was about 12-years-old or something. The adventures on that were the good old good stuff. 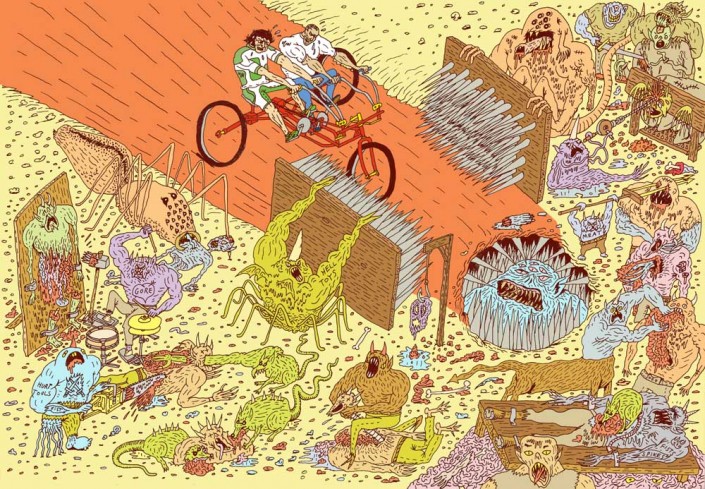 You recently collaborated with Element. How did that come about?
Having done art for years, I have been lucky enough to work on some nice projects with some really nice people, which I am grateful for, after trying for years to do some art related jobs it feels good when somebody gives me a chance to do something for them. It’s not easy to make a living as an artist/illustrator and gradually I have met people, done a bit of work here and there, and now I have been fortunate that somebody at element has seen my stuff and given me the opportunity to work with them. So yeah, it’s all been about getting work out there and seen by people and making connections.

What’s going to happen with the mainstream motorcycle industry? is it gonna be taken over by freaked out, sissybar rocking chopper nutters or will it always be the preserve of the overweight white male?
I have thought for years that the bike industry could do with a kick up the backside and a good old shake up. I think with this “new wave” custom bike scene, it’s all a bit new and different and things are changing, but everything gets stale in the end and we will probably end up with commercial watered down pastiches of the customs people like to ride now. Giant plastic number plate and indicator mounts and all that. I see a lot of girls getting into bikes at the moment I realise lots of ladies already ride of course, but there seems to be loooaaadds more getting into bikes now, which I think is great. Long may it continue! 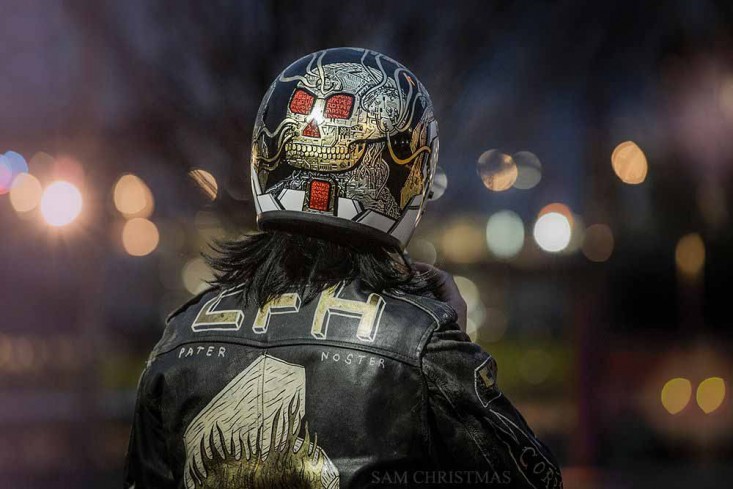 Linkedin
RELATED ARTICLES
OTHER ARTICLES
By turning a real-life crisis into daytime television fodder, TV bosses have once again shown themselves to be completely out of touch with audiences.
For over a decade, gamblers have won big by employing people to place live bets from the court. But does this dubious method still work?
Thousands attended the annual event this year to wheelie through the city and call for ‘knives down, bikes up’.
A group of young Palestinians have found temporary freedom in the act of parkour, reimagining wreckage and ruins as a series of high-octane playgrounds.
Rhiannon Adam spent three months capturing an ageing society wracked by division, isolation, and the aftermath of scandal.
Financial turmoil is pushing people who work in the sex industry into more dangerous and desperate situations as a means of survival.