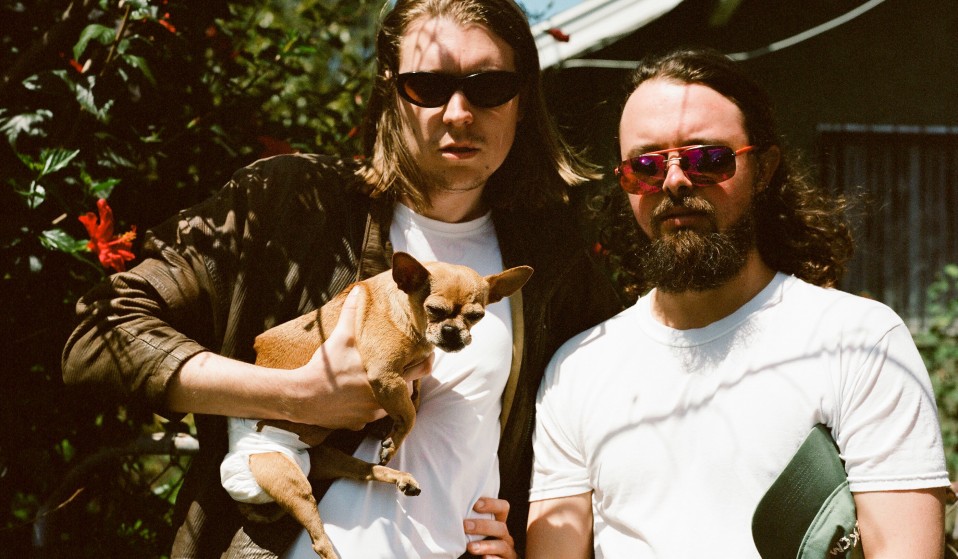 On his first album, Alex Cameron created a grandiose alter-ego as a way of dealing with his anxieties. Now he’s taking on apathy – and forcing us all to listen.

On his first album, Alex Cameron created a grandiose alter-ego as a way of dealing with his anxieties. Now he’s taking on apathy – and forcing us all to listen.

As Alex and his partner-in-crime, Roy Molloy, settle down in the deserted upstairs area of an East London pub, it becomes clear that I’m not meeting one Alex, but both. There is very little gimmick going on – the character and the singer are inevitably woven together, in a strange, vaudevillian way, showing radically different facets of the same person.

The two musicians are childhood friends, and speak with heavy Australian accents, having grown up together as beach-bound clean cut kids in the suburbs of Sydney. Their connection stayed strong, and today they write songs and long form texts while touring the world, creating their own unique style of surreal, synth-heavy songs that address the difficult parts of being a person with brutal honesty.

The dynamic between them is interesting, with seemingly complementary personalities. Both value performance in their own way – Alex focuses on living the art on his skin, owning it through severe commitment, while Roy is the (just as committed) storyteller.

It was during the making of their first album, Jumping the Shark, that Alex created the ‘Alex Cameron’ persona – a musician with a latex-made wrinkly face, who talks about his promising high-school basketball career, thinks the internet is a cesspit of horrors and lays out ridiculously specific ground rules for interviewers. A character riddled with failure and entitlement, the narrator of his first album.

“I don’t feel like people’s focus on failure today is about overcoming it, it’s more about denying it. That’s what drove my initial intrigue as a writer.” He tells me, while drinking an Aperol Spritz. “My own relationship with it comes from how much I would place it against my own ambition – I felt like I failed myself multiple times with taking care of my mental health, for example. A lot of my writing comes from that.”

In his songs, Alex seeks to address what he calls “micro tragedies” – tragedies that are avoidable, and usually stem from the individual and their personal failings, rather than are imposed on them by circumstances. One example of a micro-tragedy, he tells me, is falling victim of self-pity.

I ask what ‘Alex Cameron’, the character, has to do with him. He tells me that, in many ways, it’s a way of confronting himself – of asking himself if he had the strength to pull through as an artist, or if he will just continuously complain about “never getting his shot”.

“It’s a dark corner of my personality. That’s what I was referring to when discussing personal ambition, and that certain sense of entitlement that comes with wanting to be an artist. The  micro-tragedy there is the feeling of self-importance – that was the idea behind the title of the record [Jumping the Shark] as well: shooting for the stars, but ending up in the gutter.” 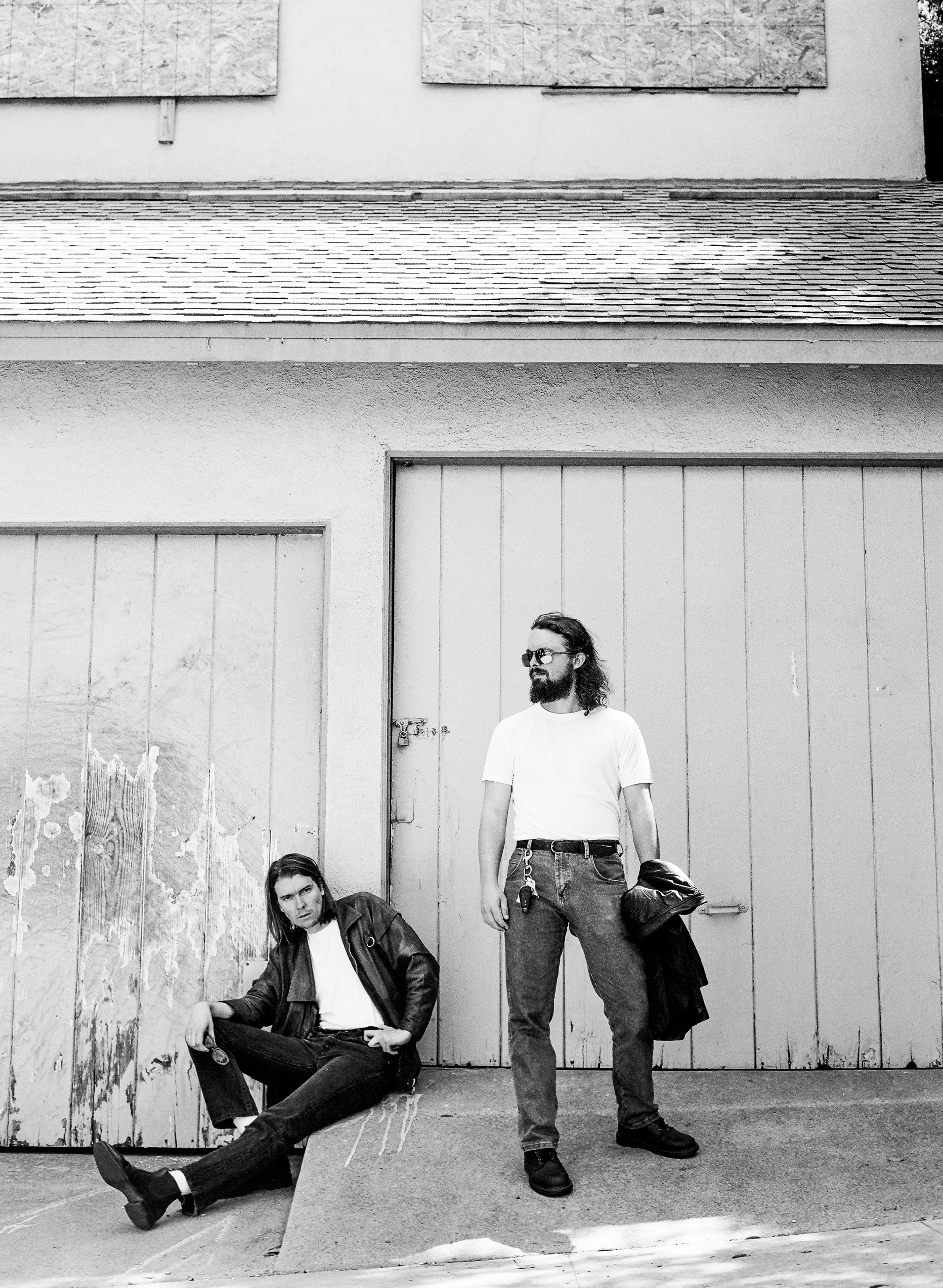 “I was tackling that sense of personal desire and ambition that I find in a lot of people around me. I think that website was supposed to embody that – it’s written with a lot of grand emotion. It looks and it behaves like shit. It’s an awful website, it’s intentionally designed awfully, hard to navigate, bad links, dead links, awful ads… just a cesspit of failed ambition. It was like creating a shrine to things that I want to leave behind.”

I turn to ask Roy Molloy how much truth there is to his own character – the mysterious saxophone player, tram conductor and business partner, who drives “A Massive Volvo”.

“There’s not as much fiction in it for me,” he says, laughing. “The theatricality is in the telling, and in us having the desire of make good show. All the characters and the story arcs are just there in reality, forming themselves in front of my eyes. I just try to be diligent in writing it down and be thoughtful in how I express that.”

“I remember distinctly asking Roy to come on board because he was a good storyteller and had a good sense of realism.” Alex pipes in. “A lot of what we do isn’t necessarily about creating something fictitious, but instead about knowing what to report about humanity in order to tell a story.”

But although this creative process made for a great album full of soul-baring honesty, that level of intense self-reflection is never easy on anyone, and it wasn’t easy on Alex either. “In a way, the record was almost like a prophecy to me. I had a big breakdown after I made the record, mentally. I ended up doing a lot of the things the character had been singing about.”

Part of that collapse came not only from an overwhelming catharsis but also from the work situation that both Roy and Alex found themselves in – working full-time jobs in the week, recording during the evenings and delivering pizzas in the weekends.

Forced Witness is the first album since that personal collapse – and although a lot has changed, the tongue-in-cheek essence of Alex Cameron and the need to address the more complex aspects of humanity through writing has remained strong. With this new album, the pair seek to challenge the strong emotional detachment that seems to be lingering in the air, permeating politics and every other human interaction.

In a way, they already challenge this apathy daily through their strong sense of duty towards giving a good performance, and the sheer amount of dedication that goes into each piece work they put out. It is no accident at all that Alex and Roy are on stage, and they won’t make you think it is. They care about being there – it’s their job, and they want to do it right. No delusions of grandeur, no indifference, and no apologies.

“Right now there’s no room for apathy as an artist,” says Alex. “If you want the spotlight, for however long you want it for, you’ve got to be saying something. Or get the hell out of the way. I’m not making a record about nothing – I don’t ever want to do that. I consider a record that’s ambiguous as a complete and utter failure.”

I suggest that maybe there’s a level of comfort that some people have from developing a certain apathy about the world. They aren’t having any of that.

“But why do you have to defend yourself like that? Why do you have to set that defence up? You’re a fucking coward.” Says Roy. “I think that not caring and acting like you don’t affect the world very negatively in the long term. If you look at where we are right now – that carelessness, mindlessness, that apathy… didn’t really land us anywhere constructive.”

Forced Witness is out on September 8, 2017, via Secretly Canadian. You can learn more or pre-order it through Alex’s website.

Linkedin
RELATED ARTICLES
OTHER ARTICLES
We catch up with the singer in her London studio to connect the dots between music, painting and her relationship with the city.
The hate Just Stop Oil faced after throwing soup over a Van Gough painting has been immense. Here, they explain why it won’t deter them.
After voting to strike across England, prison teachers explain why they’ve been pushed to a breaking point.
A new photo series documents tribes preserving the environment through simple, sustainable practices in central Asia.
Planet Ardbeg is a 40-page sci-fi anthology created by three cutting-edge artists.
Photographer Ira Lapu documents the lives of ordinary Ukrainians living amid a brutal conflict.