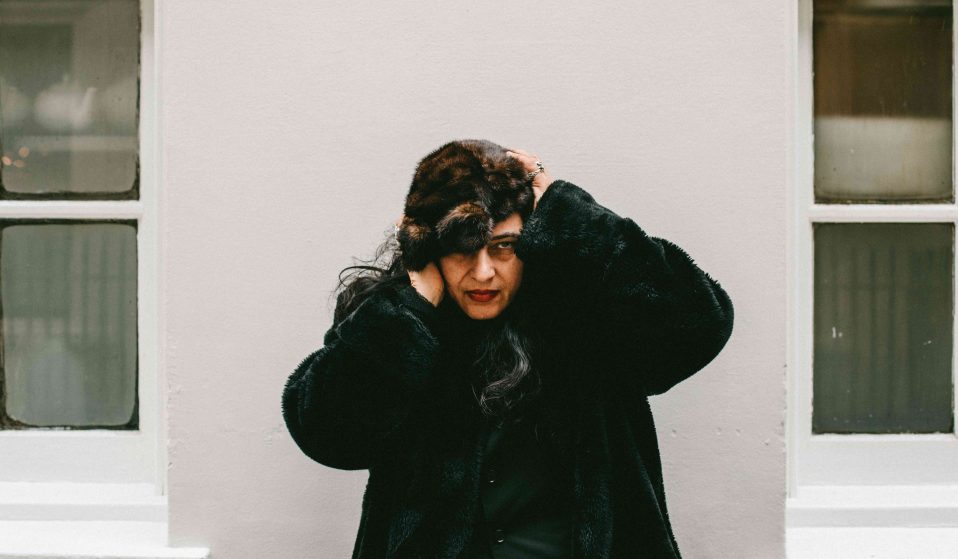 The cult French artist, who is gearing up to release her first full-length album in over three decades, takes us on a tour through London’s Soho.

The cult French artist, who is gearing up to release her first full-length album in over three decades, takes us on a tour through London’s Soho.

“I could write about five books about my life, but it’s important to keep documenting my story in my songs,” says Anne Pigalle, sat opposite me in a low-key greasy spoon cafe in London’s Soho. “I’m not going to write a book where I name every guy whose dick I sucked. It might sell a few copies but it really doesn’t interest me.”

Anne Pigalle has just released Ecstase, her first proper album in 33 years, and she has lots to say. The world has changed immeasurably since she released her debut album Everything Could Be So Perfect in 1985 on Trevor Horn’s label ZTT; and while Soho is barely the same place it was when she lived on Meard Street during the ’80s, the “yuppie bling” that she so disparages is undeniably all around us.

The Last Chanteuse, as she’s known, is a formidable character in both the English and the French sense of the word (in French its meaning is closer to “wonderful” than “fearsome”). She’s the picture of incongruity in this lively working man’s cafe with its beige mise-en-scene, newspapers on every table, a vapour of chip fat hanging in the air, and top 40 hits from yesteryear blaring from the radio. Anne is dressed head to toe in black but for her striking silver knuckle rings, a figure of talismanic bohemianism in this anachronistic diner. If she looks otherworldly here then she’d look yet more incongruous at the Chipotle across the road.

There isn’t much left of the Soho of the imagination. The red lights and the sleaze have mostly been bulldozed away to make way for flats and chains of Wagamama. As we wander the streets, Anne says she feels “like the ghost of a Huguenot” haunting this patch of London that’s been sold out to developers. She isn’t alarmed by change itself, she says, but by the onset of conformity, uniformity, a lack of imagination…

Having also lived with the epithet “the Queen of Soho”, she’s naturally a wealth of knowledge about everything W1: from when it was all fields (“soho” is presumed to be a hunting cry) to the present day, via the invasion of the Huguenots, and more recently the pornographer publisher, Paul Raymond, who owned much of the area before his death in 2008.

“The Huguenots left France because they were going to be killed, and it was the first time we had self-proclaimed immigrants,” she says, proudly, in her strong Parisian accent (undimmed from seven years in LA and more than three decades in London). “It’s funny that Nigel Farage comes from Huguenot ancestry. It’s a little contradictory isn’t it?”

Pigalle used to run a history salon at the Colony Rooms (inevitably now closed) where she would “talk about Soho, do my sex poetry and get people to talk about their sexual fantasies.”

She gets her surname from the famous Paris quartier between the 9eme and 18eme arrondissements; the place where she was born. Pigalle itself has undergone a similar transformation of sterility that Soho has. She moved with her mother and father to the Latin Quarter of Paris when she was still a child, and then she ran away to London in the ’70s to become a punk. Was her childhood unhappy? “It wasn’t happy or unhappy,” she says. “It was weird. I think I was a bit weird.”

Was she weird, or were her parents weird? “All of us. My father was a jazz musician who grew up with Jacques Prévert and loved Django Reinhardt. If we hadn’t been weird then I wouldn’t have been a punk, and I wouldn’t have come here.” 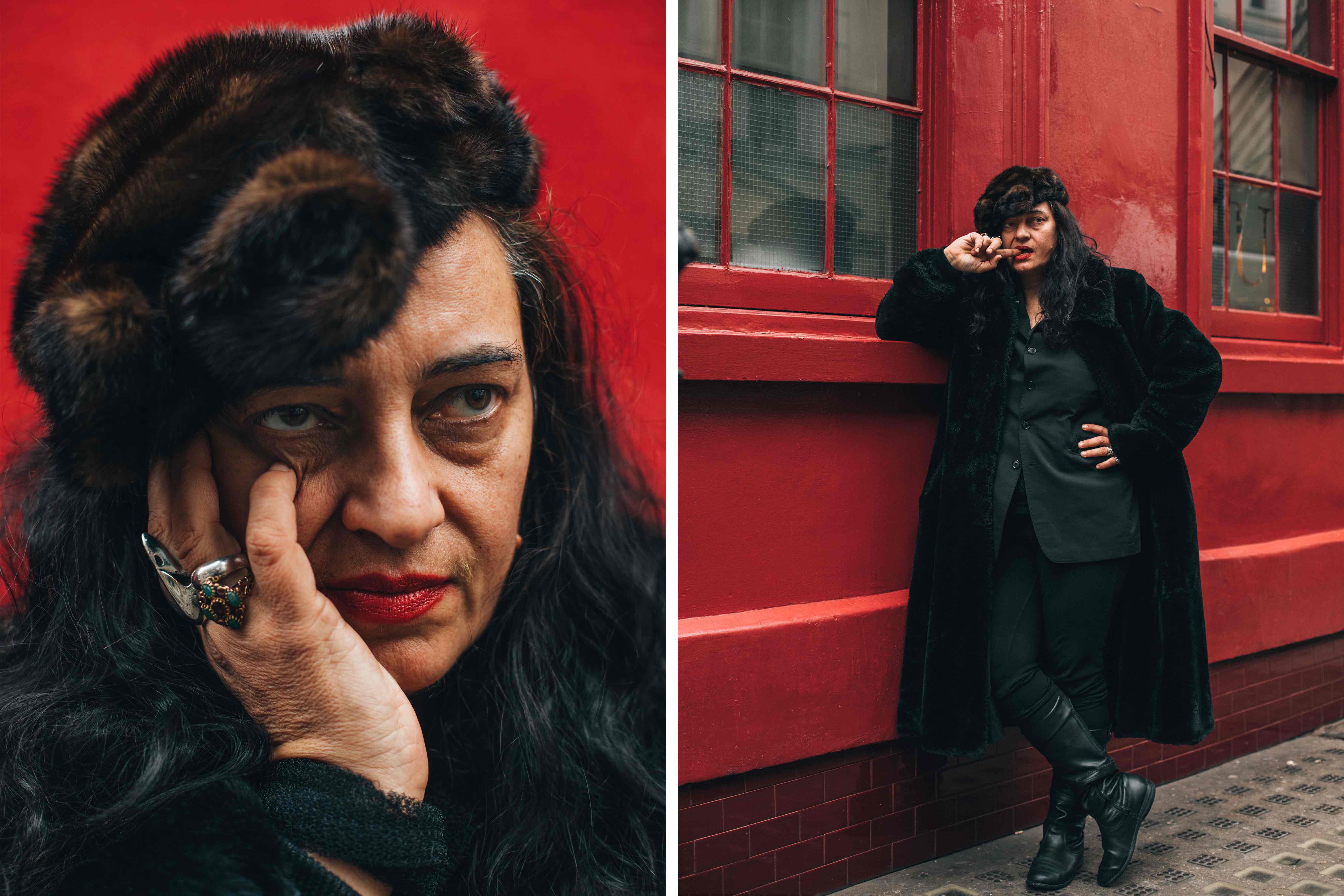 Before she was a punk, she says, “there was a little jazz at home, and I’d started to listen to Bowie, but the influence of the Third Man, with Orson Welles’ face and the famous soundtrack to the film… that was the moment for me. It’s always been visuals as well as the sound. The chord sequence, the tension, the mystery, the image; it all captured my imagination. Something just clicked.”

In the early ’80s, Pigalle cemented her punk status by striking up a friendship with Sex Pistols guitarist Glen Matlock (who plays bass on three songs on her new album). She also graced the cover of i-D, and was photographed by Mario Testino and Nick Knight, among others. Then she began performing cabaret, and acquired a cult following, despite the fact French culture was easily dismissed during the Thatcher years.

“You know I’m still the only French solo female singer to have ever been signed to a British company,” she remembers (Pigalle is prone to the odd outlandish claim it’s difficult to corroborate.) “At the time nobody wanted to know about French singers… Honestly, this is not to brag, but when I [revamped London’s] Cafe de Paris, I don’t think it’s a coincidence that all of the pubs started to turn into brasseries. Maybe it was just the sign of the times: the food started to become European, things opened up across the Channel – the Eurostar and all that. So after a while, it wasn’t such a big thing to be French. I felt a bit like Joan of Arc sacrificing myself to the English.”

Her debut album is a sumptuous marriage of Pigalle’s theatricality and ZTT’s over the top production values. It divides people, not least of all the two taking part in this interview: I love it, Pigalle is ambivalent. Of her experiences with ZTT, she says: “They didn’t really care where I came from. They didn’t even know that I had a past. They had no idea that I was a punk. They couldn’t give a shit. I just had to go out and open my gob. They didn’t know anything about this person and her past. That’s never going to be a good creative combination.” 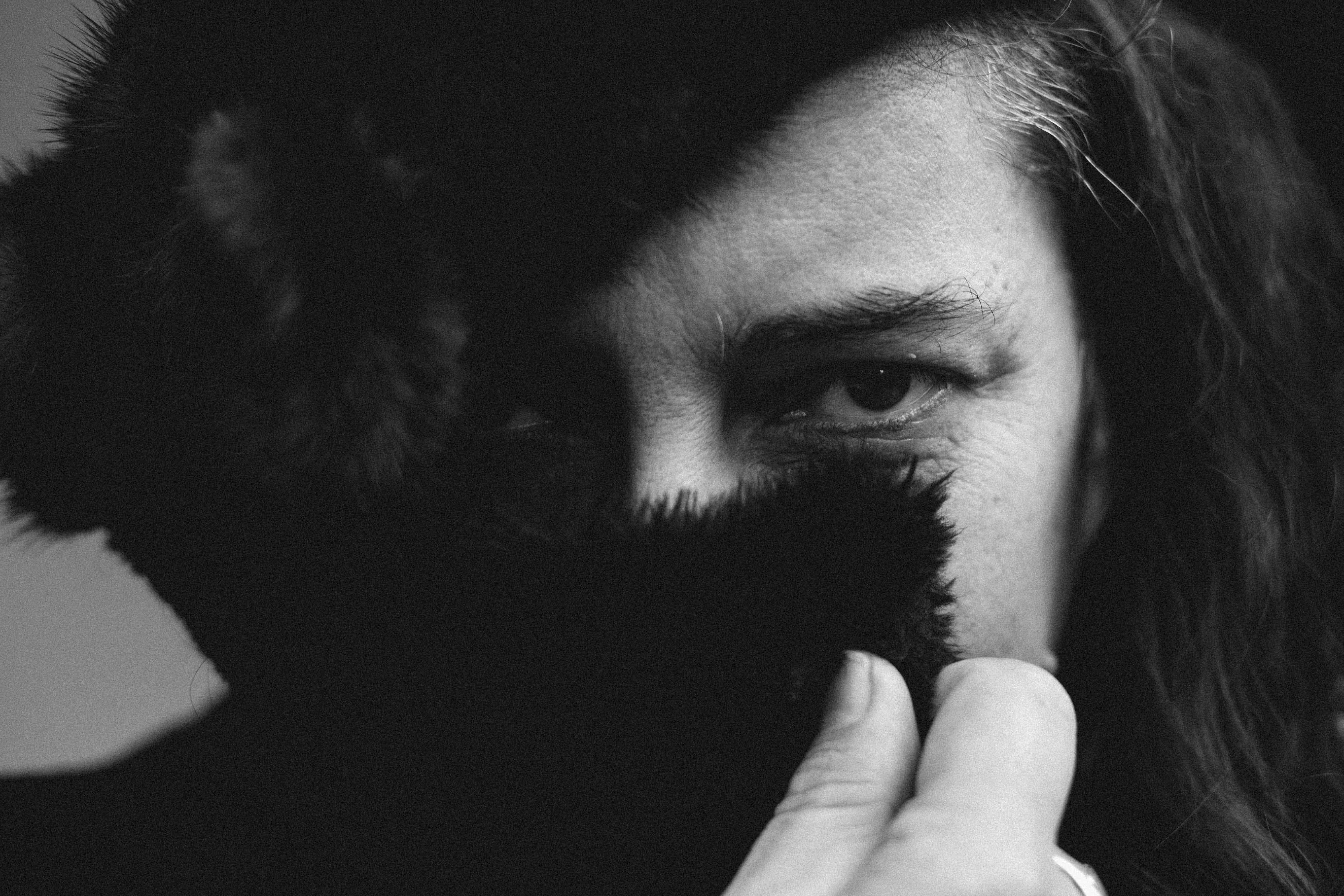 The intervening years have been full for Pigalle, even if they’ve not been filled with discography. She spent time in LA working with director Donald Cammell (of Performance and Demon Seed fame) on a film that didn’t see the light of day, but which she is still working on (Cammell died in 1996), and which Ecstase apparently soundtracks. She released some electro EPs at the turn of the decade called L’Amerotica I and II, which were compiled together under the name Madame Sex And L’Âme Érotique in 2013. She also makes a living as a painter, a poet, a performance artist and a cult personality all rolled into one (“every time I play Glastonbury they move me because they’re not sure where to put me”).

When I ask if she enjoys disappearing into the margins, she looks a little hurt. “Well since my music is so influential, I’ve never really been in the margins,” she baulks, looking me directly in the eye. “You mean I haven’t been in the media eye? I’ve been a bit of a vagabond. I didn’t have a place to live for 25 years; I’ve lived like a gypsy and it’s been fabulous. I’ve met incredible people, I’ve got great fans all over the world. To me, that’s what’s important.”

Anne has much confidence in her new album, and she should: it’s a dark, dreamy and dangerous trawl through the underworlds of Paris, LA and Soho that she says has “taken 33 years to get right”. If you want a copy then you’ll have to buy one from her website. You can’t just go and listen to it on the internet – it’s only been available as vinyl, and now there are finally CDs; all part of what she calls her ‘anti-bling’ campaign.

“I’m not a record company with a big promotional budget. If you have a big machine behind you, and people are going to buy so many, then you can afford to do that, but if you put it online or on Bandcamp, they can hear it and then they don’t buy it. So yeah, this part of the anti-bling project, and people have to come and see me live too; that’s really important.”

She adds, finally: “The last song on the album is called ‘I Found You’. It’s not just a love song, it’s about how I’ve found who I am. I don’t need to show off and pretend I’m someone I’m not just to be accepted.” 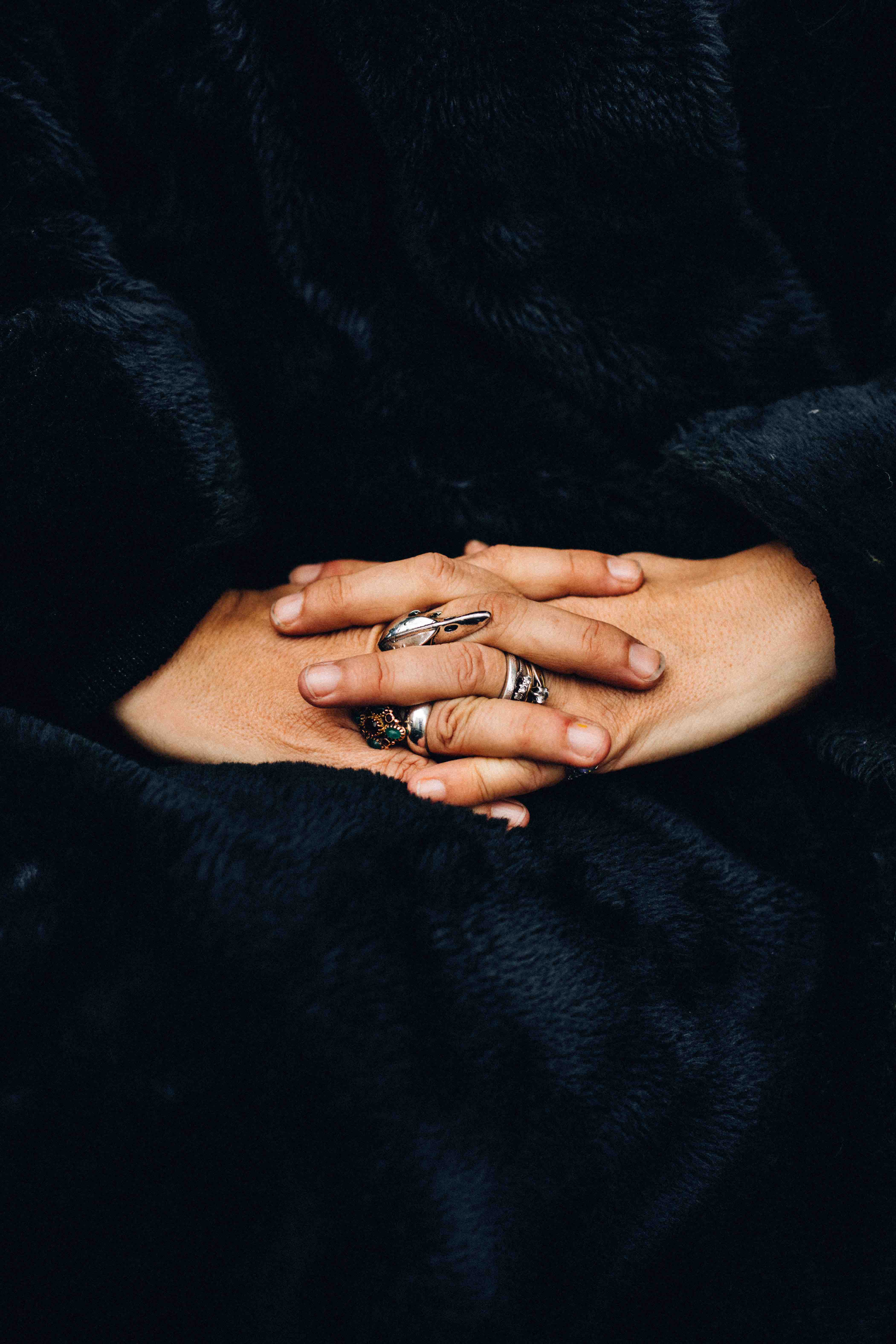 Anne brings her Ecstase Show to the Horse Hospital in Bloomsbury, London on 30th April.

Linkedin
RELATED ARTICLES
OTHER ARTICLES
Proposals to introduce a minimum GCSE threshold for student loans will disproportionately affect those from marginalised backgrounds.
Over a dozen Stop Deportation activists locked themselves to each other outside a detention centre to prevent coaches taking those due to be on the Rwanda deportation flight from leaving.
Freddie Miller’s new series of photographs investigates who today’s trainspotters are and what drives their unfettered enthusiasm.
50 years since its inception, and the campaign calling for recognition that capitalism depends on domestic labour is as pertinent as ever.
Photographer David Hoffman recalls documenting the extreme wealth inequality around Tower Hamlets and Hackney int the 1980s.
A new edition of a seminal book brings together iconic images of the band onstage in their full glory and backstage in moments of unguarded camaraderie.