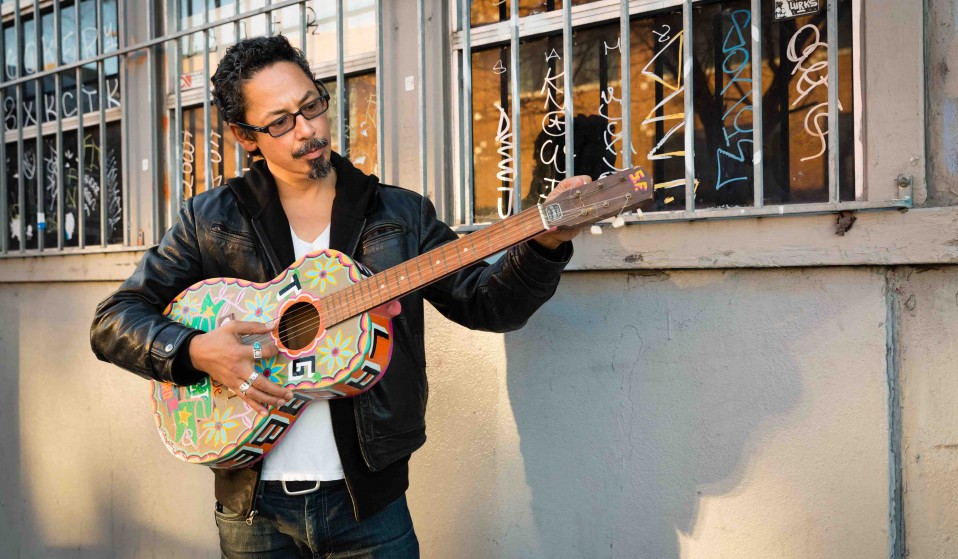 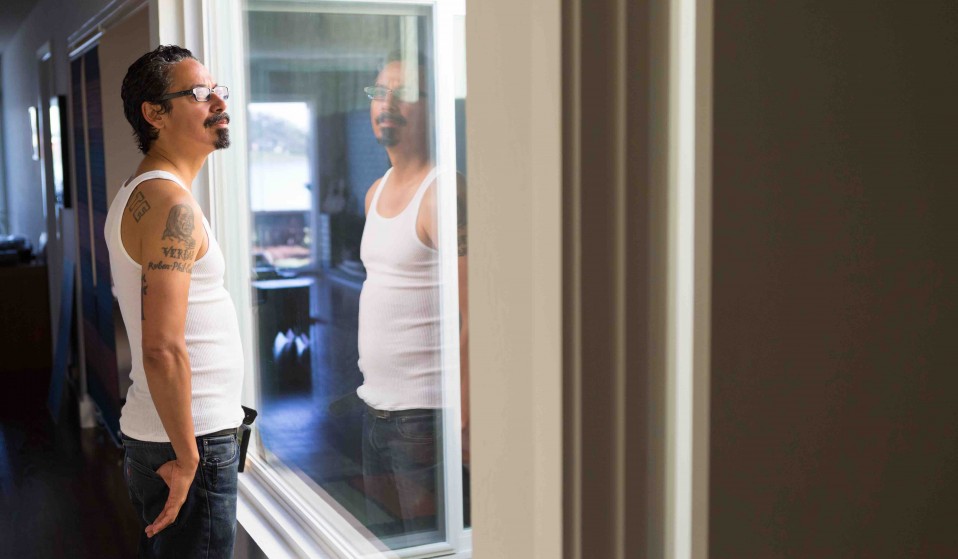 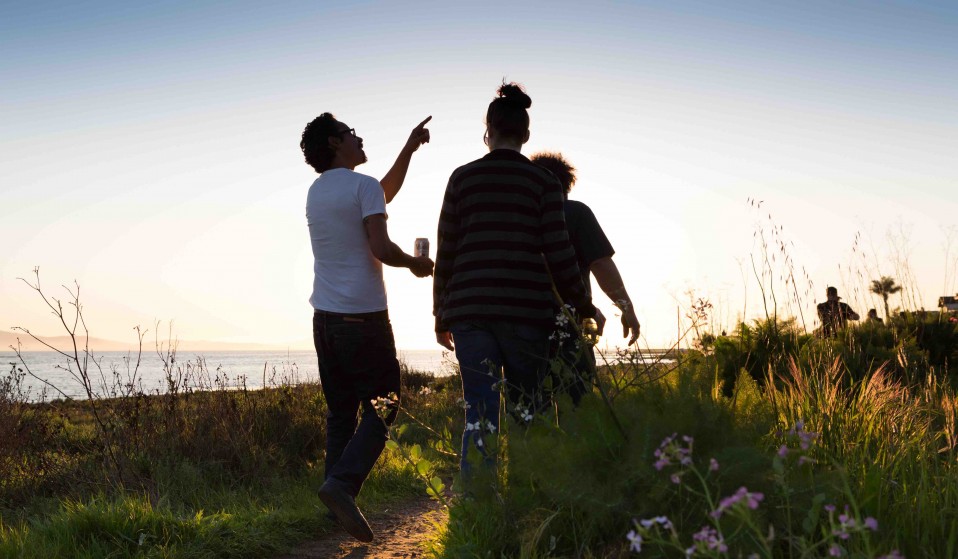 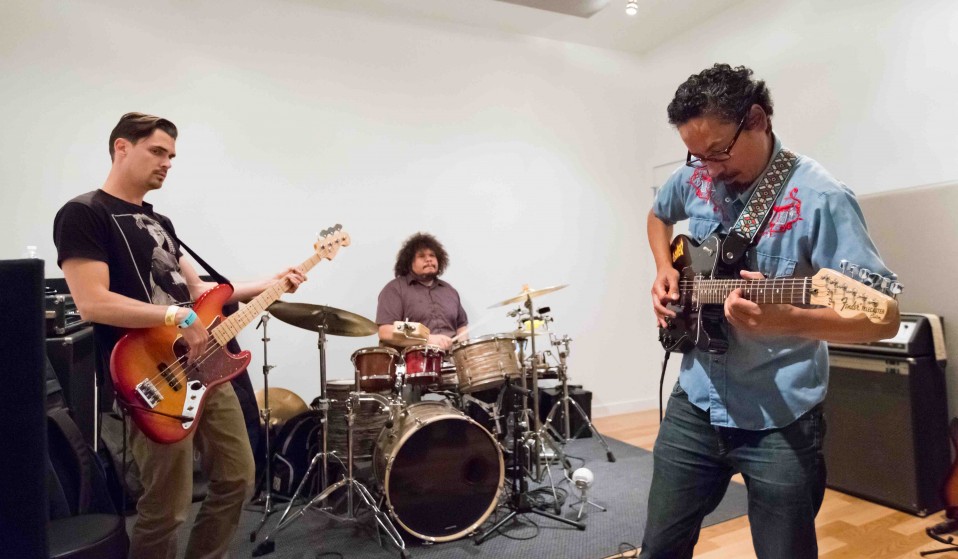 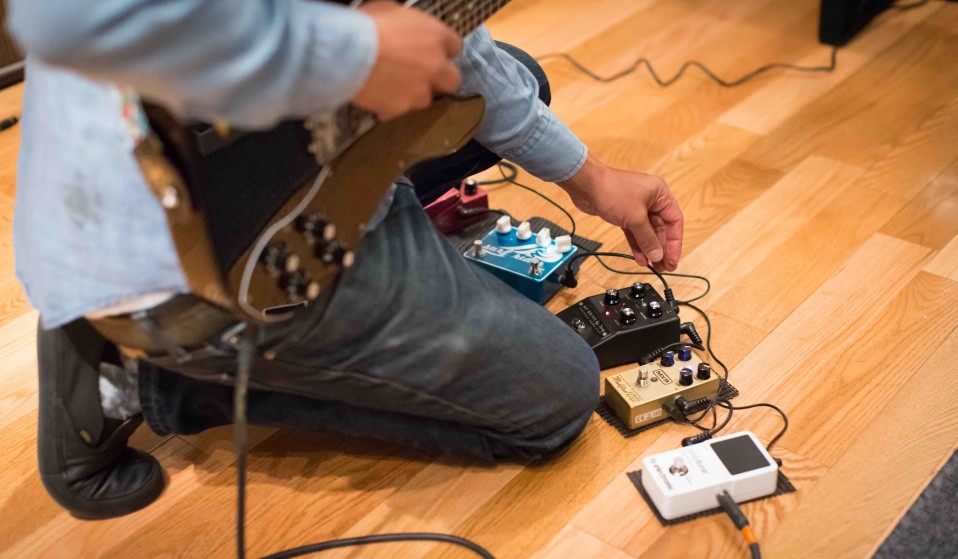 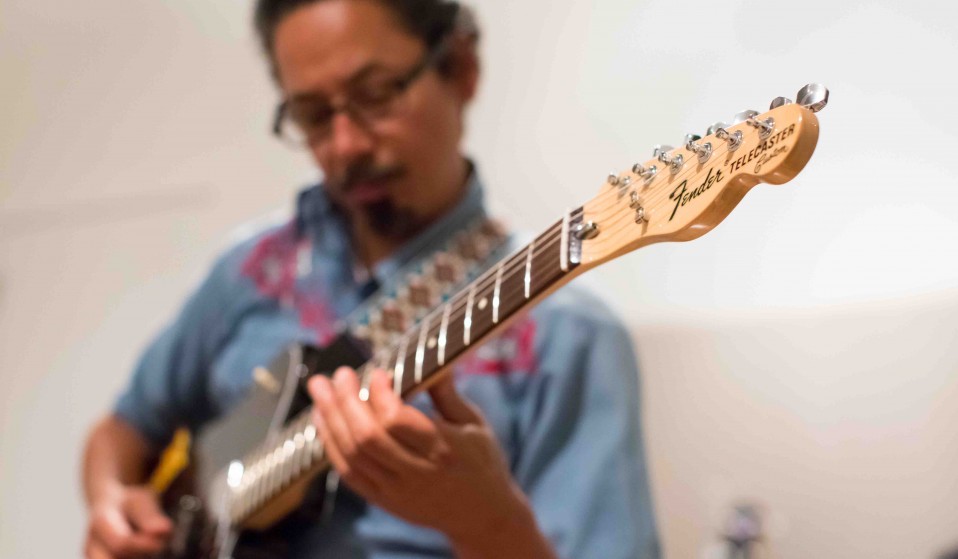 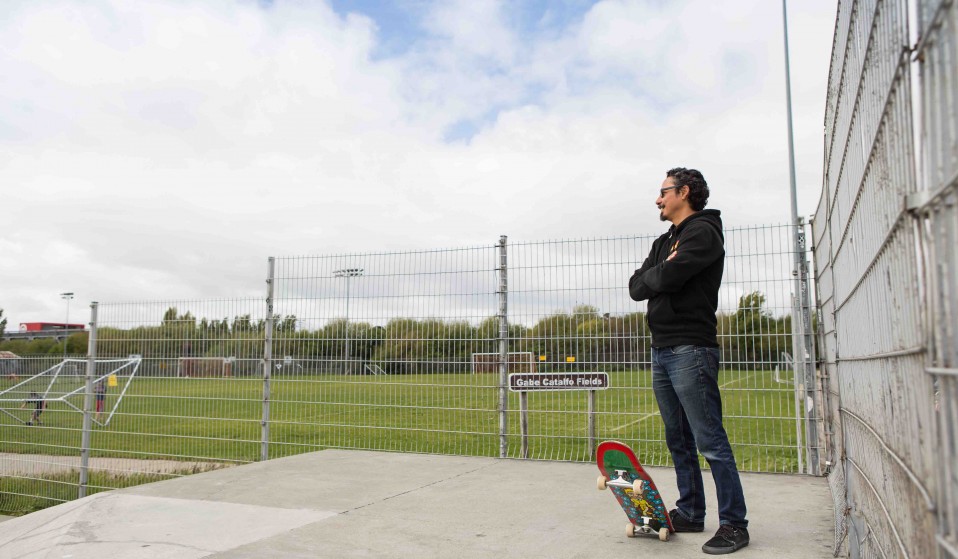 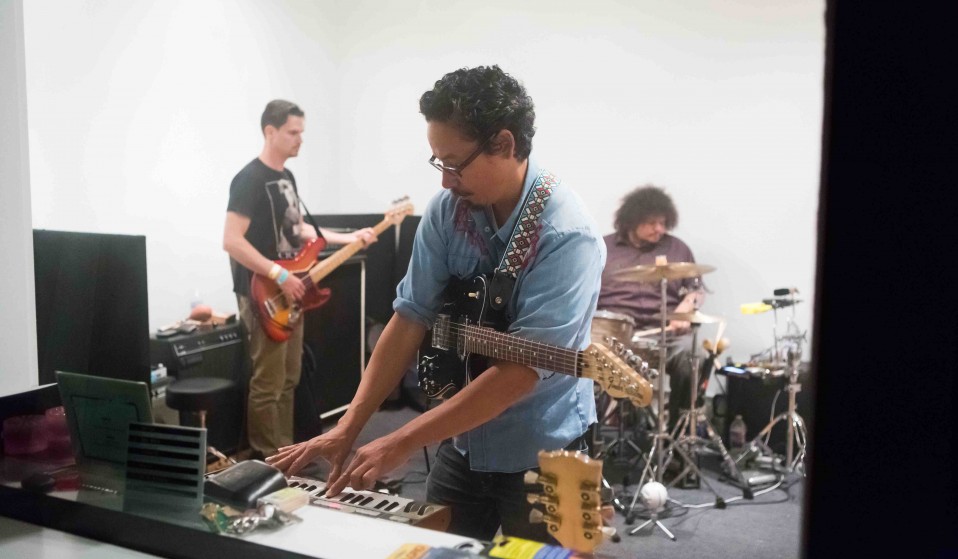 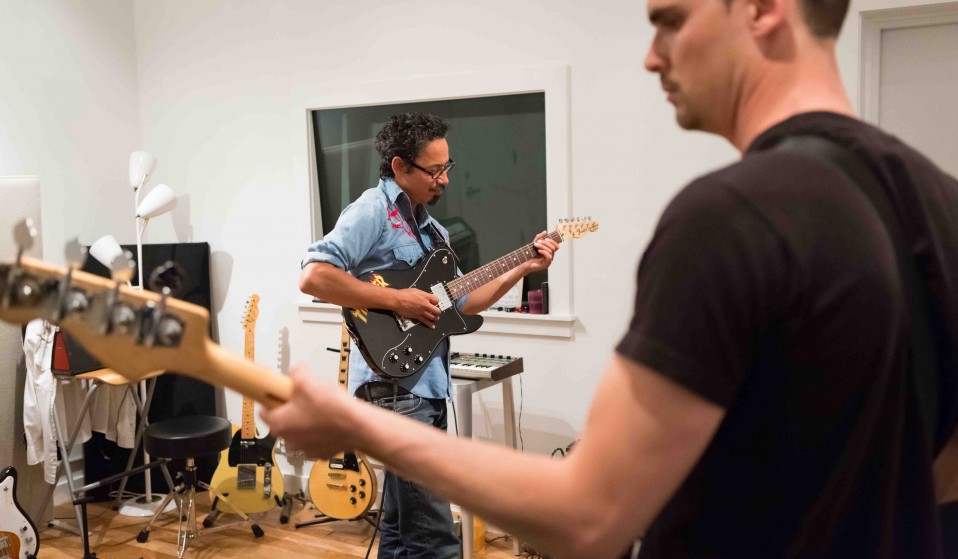 Cali skate OG Tommy Guerrero talks about how skating and music have always come together, stopping people in their tracks with his tunes and his new album, Perpetual.

Cali skate OG Tommy Guerrero talks about how skating and music have always come together, stopping people in their tracks with his tunes and his new album, Perpetual.

Tommy Guerrero cemented his place in history at the forefront of California’s defining Bones Brigade skate team in the 1980s. His laid-back style was nothing short of iconic, becoming a symbol for street skating and standing out as one of the most important skateboarders of the era.

Although he stopped being pro years ago, he has continued with the other true creative passion in his life – music. Guerrero has crafted a wealth of songs over the years encompassing a range of influences from 70’s-style jams and soul, to bossa nova. The 49-year-old aims to create a mood with his music, something to touch the soul rather than the head that is created in and for the moment.

‘The moment’ is what the skater and musician has always lived for, and Guerrero’s latest LP, Perpetual, certainly doesn’t stray from that. A continuation of the Japan-only release Perpetuum – he’s very big in Japan – released last year, he drew in a raw approach and recorded the album on an 8-track, which he’s wanted to do for a while.

Songs such as ‘Water in you Hands’ and ‘At the Circles Edge’ evoke Guerrero’s aesthetic of being free, the songs limitlessly dancing around your head while guitars twang.

Huck caught up with Guerrero to chat about Perpetual.

Have music and skateboarding always been two things that have sat side-by-side for you?
Pretty much. I started playing music a few years after I started skating. Punk had hit the west coast skate scene and the DIY ethos went hand in hand with skate life. The fuck you attitude of punk resonated with skaters as we were seen as losers as well, so it was one big fuck off in chorus! So skating and music have always been intertwined in my life. As far as playing when I started travelling I couldn’t manage being in a band so I’d get music in however and whenever I could. The solo thing started as a necessity to create music. I needed that creative release.

You recorded Perpetual on 8-track. Is this something you have wanted to for a while?
Yeah. Been tired of staring at the fucking computron and burning my retinas into ash so wanted to get back to basics. I started on a 4-track so this was an easy transition. It looks like a 4-track on steroids. I also like the sonic quality of tape. Different than digital in a way that seems a bit easier on the earballs. Also much more familiar as most of what I listen to was recorded on tape. It definitely has its challenges though. I’m down to six tracks as two have decided to go on strike. Need to find someone who can fix it. It weighs eighty pounds, so not easy to haul around.

How did the process differ to recording with a ‘computron’? Were you able to do more creatively because of its limitations?
It’s like night and day. You can’t edit your crappy takes! You either get it right or live with the imperfections, which I’m OK with. There’s a bunch of sketchy shit on this album – I think it enhances the humanity of the recording. We nor life are perfect. Nature is not perfect. I am far from even trying to reach any idea of perfection. I’m a hack jack!

You’ve said you want to “strip the tunes down and create more of an atmosphere than [be] concerned with writing ‘songs’”. Is this approach generally more comfortable for you when making music?
Completely. I’m all about the moment and the mood. Writing songs and laboring over them kills the emotional quality and even the reason why the song came about. You lose that initial spark and fire. Music has a heavy emotional effect on me. I want to be in an “open” state when I record so the listener senses something more… something that transcends passive listening. I want it to hit people in the gut. Wait… what was I saying? Tangents…

You’ve previously said that you’re influenced by late 60s/early 70s Brazilian music. Does this album continue in that vein?
Hmm I don’t know. Not directly. More Mulatu Astatke than anything else. But I want to record some shit with my nylon string git again. A pedestrian attempt at bossa… with my own “unique” style… ha! Maybe on my 4-track. Super simple.

Perpetual is a continuation of Japan-only release Perpetuum. Will this new album be released everywhere?
Yessum. Or I hope so!! I don’t really know. Maybe some tunes will be licensed so I can eat burritos and beer for life!

How are you finding the touring life?
I never tour really. Just short stints here and there. I don’t have the luxury of really hitting the road. My son, work, $$$ cost, a lack of a band make it all pretty impossible. I just throw some shit together when I can. I love being on the road though.

What’s next for you after this album?
The poor house…! Dunno – trying to navigate the wild west of the music industry really takes the pep out of your step at times. I just don’t want Modular or myself to get stuck with 500 CDs/vinyl. 1 download and the world has it. Who knows…

Tommy Guerrero’s Perpetual is out now on Grand Palais.

Linkedin
RELATED ARTICLES
OTHER ARTICLES
Skateboarder and musician Tommy Guerrero takes the lead in an action-packed issue devoted to culture-shapers of all kinds.
Huck joins Bones Brigadeer and skate legend Tommy Guerrero as he cuts a path across the continent on his first ever European tour.
Catch legendary skater and jazz rock guitarist Tommy Guerrero on tape.