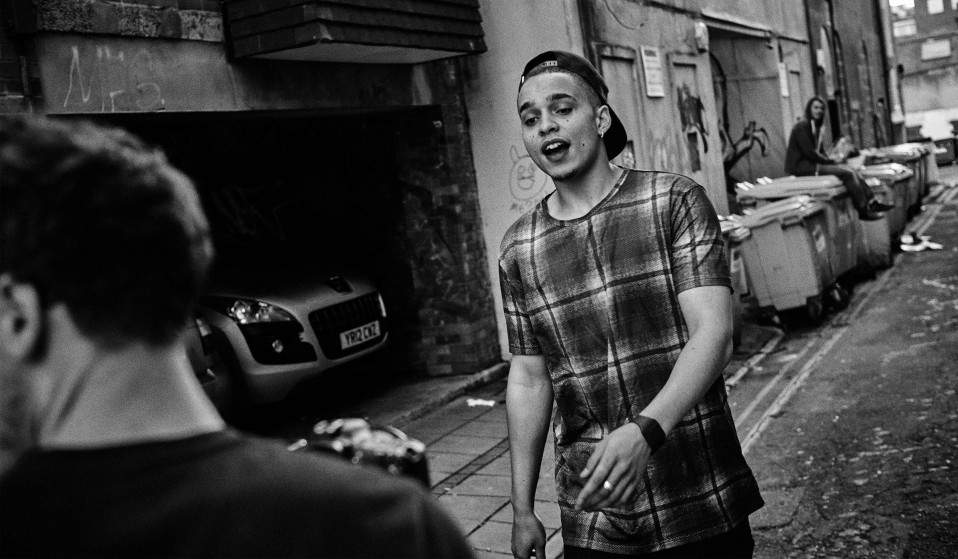 Roll over YouTubers and make way for Wisdom – an overnight success story that took a decade of hard graft.

Roll over YouTubers and make way for Wisdom – an overnight success story that took a decade of hard graft.

On July 28, 2014, twenty-one-year-old Ocean Wisdom uploaded his first music video onto YouTube, hoping for a few hundred views. Outside of Brighton, and a core hip hop community, he was almost unheard of. But by the time he went to bed that evening, ‘Walkin’’ had been watched more than 10,000 times. As days passed hype continued to build and the track spilt offline with radio deejays praising it as the UK hip hop song of the week, month, year. “It’s fucking madness,” says Wisdom three months later, still surprised at what took place.

From a distance, it seems as if Ocean Wisdom is another example of do-it-yourself success. After one video on YouTube, he’s being pestered by producers who want to work with him. So any kid with an internet connection can do the same, right? “Sure, any kid can record vocals on their iPhone, put it over a beat on their Mac, shoot a video on their camera and put it online,” says Wisdom, speaking from his home in Brighton. “But the only thing that qualifies is a proper video. Even if it’s not a good video, you can tell if it’s a proper video – a proper tune that’s had a decent mix-down. You’re not going to put out a music video with that level of skill if you don’t have a genuine interest in music, or a genuine interest in becoming a musician. As long as you have that, it’s alright. Which is the same as before [the internet], to a certain extent.”

Wisdom’s ‘overnight success’ is in fact a mirage. Behind that three-minute video lies a decade of work. Given the name Ocean Wisdom at birth by parents he describes as “a bit loopy,” he grew up in a house immersed in hip hop and reggae. Beatboxing from age seven, he started rapping when Gorillaz released ‘Clint Eastwood’ in 2001. He recounts a story of how his mum wrote out the lyrics from the rap verse (“Finally somebody let me out of my cage”), to keep him occupied on a long car journey. Learning it off by heart, he rapped it by the end of the trip. Interested in music but not yet hooked, he began fooling around and rapping with friends at school. “I just used to do these ridiculous joke rap battles over Harry Potter theme instrumentals,” he laughs.

Gradually, in his own time and without telling a soul, he started taking music more seriously. Spending hours writing lyrics in his bedroom, he filled his computer with gigabytes of Microsoft Word files and started writing and recording tracks in private. When he was fifteen, he finally played one song for his closest friend. “The first thing I did was start rapping in an American accent, trying to copy Eminem,” he laughs. “I knew what I wanted to do, but I just wasn’t good enough yet. I was just perfecting it.”

Since then, Wisdom has written every day for at least two hours. His vocal ability has been praised as outstanding, and his lyrics play out like a coming-of-age journal of a cheeky British teen. (“How the fuck on earth did we become so angry? / Couple of years ago man was just reading a Dandy / So how’d I go from reading a Beano to beating up Emos / Swimming in Speedos, to swinging in Chinos.”) Although there are more serious moments, most tracks are filled with off-beat observations. “It’s a way for me to express a side of myself that I can’t really show off in public, because it’s a bit inappropriate,” Wisdom laughs. “You know that weird side of you that every person has? I let that out a lot with my writing.”

But the biggest twist in Wisdom’s story is the ‘Walkin’’ track, which he wrote four years ago, aged just seventeen. One year later he recorded it – “First take, one take,” he says proudly. He laid the track down effortlessly with producer Dirty Dike from High Focus, but admits he was nervous and eager to impress as it was the first time they’d met. Shifting in tempo, cadence and rhythm, he delivered each lyric flawlessly. And as the song ends you can hear Dike shout loudly in the background, ecstatic at Wisdom’s talent. The praise he’s starting to receive now is almost four years late.

With more videos scheduled for release – shot by his Brighton crew – a mixtape in the works and rumours of a joint album with Dirty Dike, Wisdom is getting busy. But he’s not about to fall into any ‘dollar billz’ cliches. “I want to bring it back to where it’s all about how sick you are at rapping. How good your flow is, how good your lyrics are, and how good your delivery is,” he says. “It shouldn’t be who’s the greediest or who looks the coolest.”

So what’s the take-away for other kids penning lyrics in their bedroom? Wisdom has a few final wise words. “You can put all the hard work you want into it, but at the end of the day you’ve actually got to do something physical. Like make a video, with a good song,” he says. “‘Walkin’’ has opened up so many more avenues that would have been so hard to access if I hadn’t done that in the first place. You have to do it. You have to set yourself up.”

Find out more about Ocean Wisdom.

Linkedin
RELATED ARTICLES
OTHER ARTICLES
As the Scottish government announces a rent freeze, an activist with Living Rent who fought and won shares how they did it, and what must come next.
With skyrocketing rents, packed out viewings, bidding wars and more, renting in London has never been harder.
Thousands attended the annual event this year to wheelie through the city and call for ‘knives down, bikes up’.
For over a decade, gamblers have won big by employing people to place live bets from the court. But does this dubious method still work?
Ahead of the release of their first collaborative album, the producer and rapper talk psychedelics and the state of UK hip hop.
The workforce is now gearing up for industrial action after receiving a measly pay rise, reports Ella Glover.