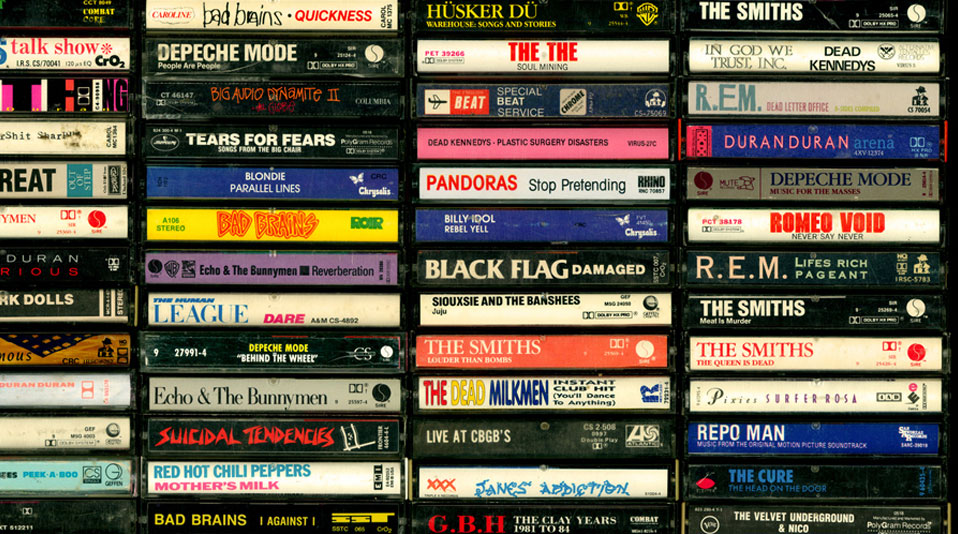 Cassette labels across the UK and the US celebrate the analogue format September 27 with new releases, rare reissues, special gigs and all-out tape-themed geekery.

Cassette labels across the UK and the US celebrate the analogue format September 27 with new releases, rare reissues, special gigs and all-out tape-themed geekery.

If you grew up in the ’80s or ’90s the chances are the first music you ever owned was in a cassette format. Cheap, compact, shareable and easy to record onto, cassettes were the perfect medium for a DIY youth who gave rise to punk and hip hop.

It was cassettes that channelled sound through boomboxes in the Bronx when the Beasties were fighting for their right to party. It was cassettes of “loud and aggressive” music found in bargain bins in Hermosa Beach that inspired Keith Morris and Greg Ginn to strike out and form Black Flag. Tupac blasted a dubbed cassette of Nas’ seminal Illmatic in court during one of his 1994 trials. Joey Ramone made rare solo recordings on cassettes that were discovered after his death in 2001. Mixed cassettes were made for lovers and demo cassettes were posted to labels. Cassettes literally made the music world go round.

But cassettes quickly fell into obscurity after CDs dominated the game in the late ’90s/early naughties. And now, the majority of music finds life in a digital format.

So, taking inspiration from the vinyl renaissance and their annual Record Store Day, a group of analogue revivalists are revisiting the cassette format and breathing new life into its plastic shell.

Launched just last year by a group of UK cassette label owners including Steven Rose of Sexbeat Records, Matt Flag of Suplex Cassettes, and Jen Long of Kissability, Cassette Store Day is raising its game this year with a ton more releases and a US branch run by American cassette aficionados Burger Records. Is the cassette safe from extinction? We caught up with Matt from Suplex to find out more.

What exactly is Cassette Store Day?
Cassette Store Day is a celebration of the humble cassette, a format that, although not a major competitor to Vinyl/CDs/Downloads, is still alive and holding its own. As the past five years have seen a ton of new cassette labels pop up, the majority of which are based online, CSD tries to bring these releases into shops again, even if it is for just one day a year. In basic terms, it follows the Record Store Day formula, but just a little bit different!

Why did you start it?
Primarily because we all run cassette labels and thought it would be funny to have a cassette version of RSD. The original premise had a lot of emphasis on just having fun and seeing where we could take it. I don’t think we anticipated the potential that other labels/shops/people would think it was a good idea!

How do you hope it will have an impact?
My main hope is that people realise what a great format cassettes are, and why we all loved them in the first place. For me personally, I love a physical product and have never been able to wrap my head around the concept of mp3s on my computer as ‘owning’ the music. Due to their affordability, cassettes are that perfect middle ground for many artists and labels who only want to make a small run, or a release something a little bit weirder that they don’t have the funds to put onto vinyl. This also then means you get lots of tape labels who release some really awesome releases that might never have seen the light of day otherwise.

What’s the international cassette community like?
I’ve been releasing tapes for five years as Suplex Cassettes and have spoken to many labels over the years who have all been really cool and supportive, sharing tape plant or printers details or places to distro tapes. I’ve only ever encountered really awesome people who have a genuine love for music and for being involved. The guys at Burger records are a great example of a cassette label that have released some incredible tapes (and a whole lot more), who are genuine fans and have been super nice to work with this year taking on the USA for CSD.

Who’s involved in CSD and what does everyone do?
At the moment CSD is just Jen and I and we pretty much do everything between the two of us, apart from PR, which needed a professional! We both have full-time jobs so a lot of our personal time is spent doing admin. I can’t count the amount of hours are spent in the run up replying to emails and updating spreadsheets, but it is all worthwhile when you see the amazing releases that come out every year and the people excited to buy a cassette by someone they love!

How can people get involved/show support this year?
The best way to get involved is to get down to one of the participating shops on September 27 (check the website to see who is involved) and pick up a tape, maybe even buy something else from the shop. You can also tweet (we are @cassetteday) about all the tapes you want to buy and which shops you will be visiting.

What have been the challenges in bringing CSD to life?
I have to say, we have been pretty lucky so far. Maybe the biggest challenge from the first CSD last year was that is was way bigger than we anticipated and we had to react accordingly to that. I did not ever believe it would get the attention of the mainstream media such as the BBC or the support of record labels and bands who I have looked up to since I started listening to music.

What have been the major inspirations?
The obvious inspiration is RSD, as they really paved the way with a day celebrating a format, but the cassette still maintains the top spot for inspiration. The first albums I bought were on cassette, my formative years were formed around taping friends’ records and making/receiving mixtapes was a way of life. I still think tapes sound lovely and warm, they look cool and are pretty durable, come in all colours and can be packaged in way more ways than an LP can.

What’s the future for CSD?
Hopefully to carry on the celebrations every year, while bringing cassettes back a little. I would personally love to see some of my favourite indie labels doing tape versions of certain releases at a price that reflects their affordability. What I would hate to see is tape releases being sold for high prices at retail, and for the releases on CSD to become eBay fodder. I can’t control these things, nor is it my place to. I’d just prefer it not to go that way.

Linkedin
RELATED ARTICLES
OTHER ARTICLES
To mark the premiere of his new documentary on surfing giant Gerry Lopez, the filmmaker and former pro skateboarder sits down to share his unique brand of wisdom.
As the Criminal Bar Association enters its fifth week of action, criminal barrister Russel Fraser explains why the legal professionals have walked out and how action is likely to escalate.
A sharp increase in officers armed with the electrical weapon is resulting in serious injuries and deaths.
With the virus now a global health emergency, we must take steps to fight misinformation and demand a swift UK-wide vaccine roll out, writes Phil Samba.
Photographer Bud Glick recounts documenting everyday life in the area, and what it taught him about the Chinese immigrant experience.
Last week, Tower Hamlets council removed its nudity-restricting licensing conditions in a huge win for London’s kink community.