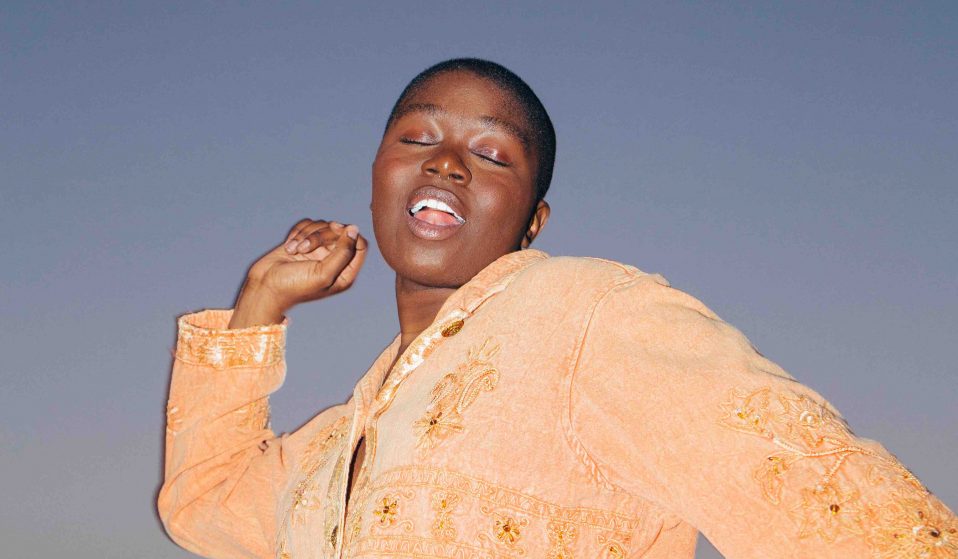 Following the release of her debut EP, songwriter and guitarist Christelle Bofale about stigma, self-care and finding joy in the darkest places.

Following the release of her debut EP, songwriter and guitarist Christelle Bofale about stigma, self-care and finding joy in the darkest places.

When Christelle Bofale answers FaceTime in Austin, Texas, she’s been having a sitting-in-bed-watching-Netflix kind of day. She seems a little abashed about it, but it’s the kind of rest that feels necessary – taking things slow feels like an increasingly rare antidote to the pressures of capitalism and social media alike. More than that, when you’re an independent artist about to put out your debut EP and dealing with endless promo as a result (the night before we talk she was up late, performing and shooting a video), taking some time for yourself is kind of crucial.

To a point, that’s the kind of the message that shines through on said EP. Titled Swim Team, it brims with immersive, lo-fi guitars (the name references these submerged, watery sonics, as well as Christelle’s regret at not showing up to swim meets, in spite of being on the high school team). But what’s most striking is Christelle’s voice: one that speaks back against the concept that, in her own words, “As a black person in America, you’re kind of taught that seeking out mental health care is a white thing, and that you as a black person should just be strong enough without professional help.” Looking after yourself can come in many forms, but recognising that you’re allowed to look after your mind is still something that feels quite rooted in privilege.

Born to Congolese parents, Christelle was exposed to music and storytelling from an early age. Her dad is a soukous guitar player as well as the musical director for the Congregation at his church, and Christelle was given a keyboard when she was four. As well as that, though – and perhaps most tellingly – Christelle always liked taking care of people. “I would take care of my dolls”, she says, laughing. “So I went through a bit of a phase where I thought I wanted to be a vet, but… I didn’t feel that for very long.” On Swim Team that compassion is obvious: be it in the luxurious melodies, or her tender lyrics about heartbreak and moving on.

You taught yourself guitar in high school – how did you go from there to where you are now?
Once I got to college, I was in a relationship with somebody, and we had been writing music together – he would play the guitar, I would write the melodies and lyrics. So I kind of stopped writing my own stuff. And then once that relationship was over, fall of 2016, that was when I was like, ‘Okay, wait, I gave that person a lot of power, but I can completely do this on my own.’

So I slowly started playing solo shows, and it was really insane how things started to slowly build. Up until very recently I haven’t had any music online, so it was very much creating this community in-person.

It’s crazy even asking, because obviously some of the pioneering guitar players were black women – but what’s it like basically being an indie guitar artist, when I imagine people look at you and assume you make R&B?
There is definitely a stigma, or a predetermined idea. I didn’t really notice or become aware of it until a couple years ago. In middle school and high school, me learning the guitar and practicing guitar was such an internal thing. I had idols that I looked up to but, looking back, a lot of them were white. But I remember when I discovered Lianne La Havas, I connected with her so deeply, and I just realised I hadn’t really had a black female guitarist close to my age to really look up to and see myself in.

Once I started playing shows, sometimes I would send bookers or bars a clip a friend had filmed of me playing because, again, I didn’t have anything out. And I would get messages back like, ‘Thank you so much for reaching out, we’ll have to consider putting you on an R&B showcase sometime.’ Like, ‘Oh my gosh, did you even listen to what I sent you?’ That’s not to knock those genres: R&B is so important, jazz is so important, and they need to exist, and I love them. But, you know, we don’t have to be confined to spaces. We can be just as powerful moving in other worlds.

You’ve spoken about this EP being a snapshot of black mental health, I was wondering if you could unpack that a bit. I feel like mental health issues are often coded through a white lens.
I wasn’t necessarily thinking, ‘Oh, this will be such a good way to start a conversation about mental health.’ But once I started thinking about writing an artist bio, I asked myself, ‘What do I want to talk about, if I’m being given a platform?’

Going through my own experiences, a lot of resources did come from white people or white organisations. My therapist was white, when I was checked into hospital most of the staff I worked with there were white people. Most of my friends who would have open conversations about mental health were white, and when I was having suicidal thoughts in high school and I would talk to my parents about it, they would be like, ‘That’s white people issues.’ Or, ‘Just learn how to handle it.’

So how does that manifest in the EP for you?
The EP was born from a place – with the exception of one song, one song was from high school – that was really, really dark for me. But now, even though [these songs] can sometimes be hard to perform, I still love listening to them –  they bring joy. I guess it’s just a testament to being able to take these dark moments, as cliché as it is, and turn them into something positive. 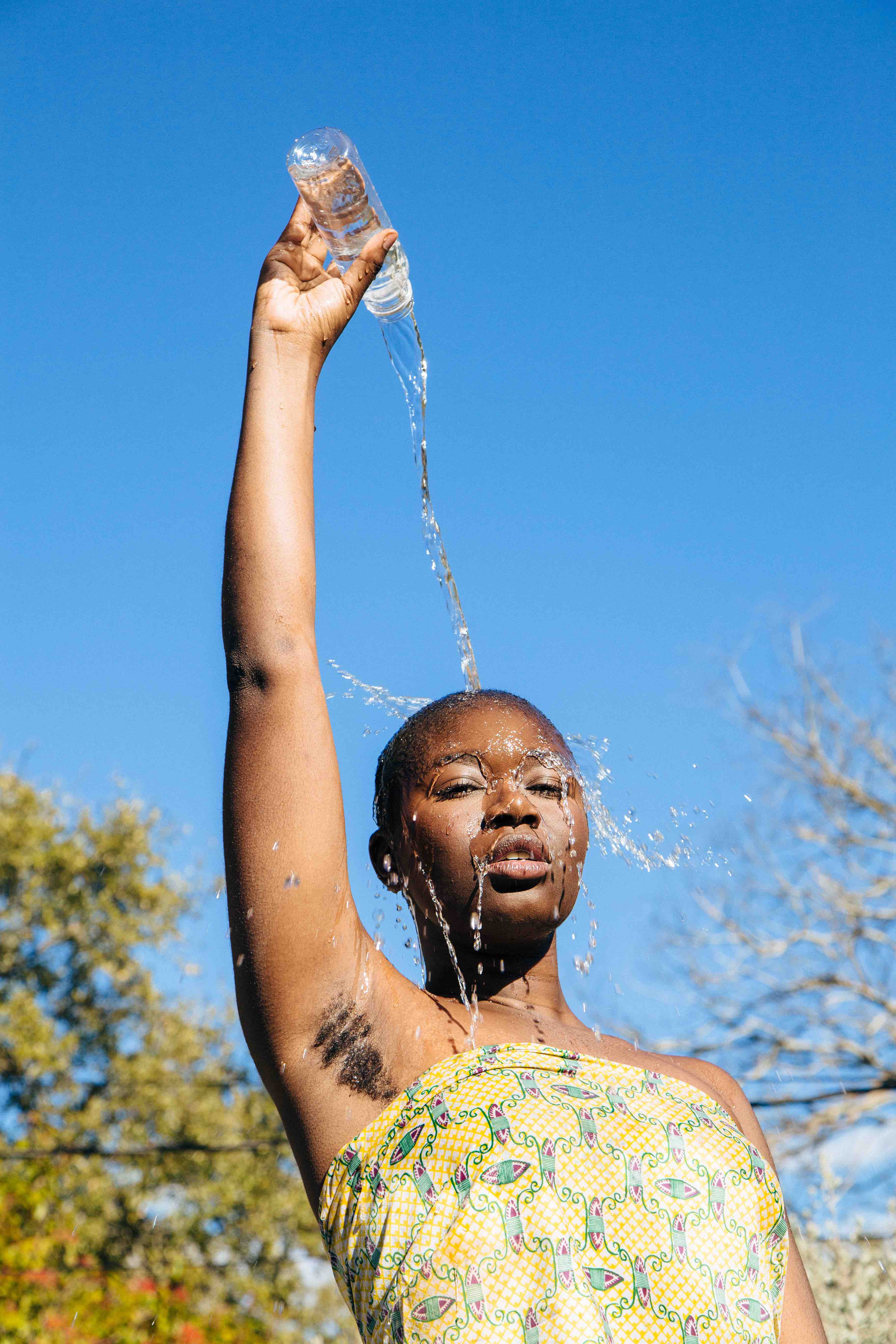 Swim Team is out now on Father/Daughter Records.

Linkedin
RELATED ARTICLES
OTHER ARTICLES
From the chip shops, to the bingo parlors and burlesque dancers, photographer Mike Coles remembers capturing scenes of holidaymakers by the English coast.
To mark the premiere of his new documentary on surfing giant Gerry Lopez, the filmmaker and former pro skateboarder sits down to share his unique brand of wisdom.
Students are being left to languish in unsafe housing, in some cases leading to serious health complications.
The government’s brutal crackdown on NGOs has left victims of rape without anywhere to seek help. And now, as the country plays a key role is Russia’s war, things are only getting worse.
Steel City is often overlooked when it comes to the country's cultural radar despite its role in shaping electronic music.
Yesterday, rail workers came together to protest poor pay, working conditions and job cuts in their latest round of strikes.