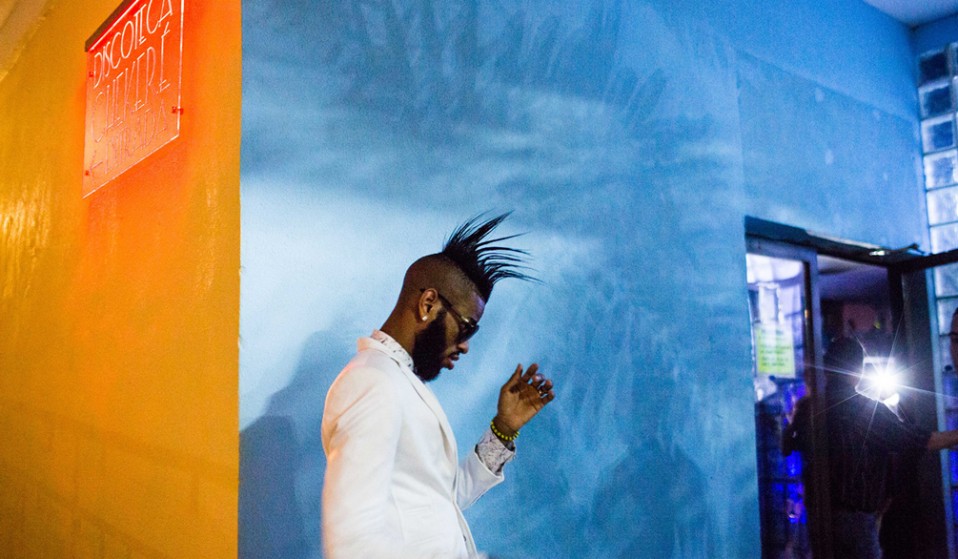 In a country where music sales are controlled by the state, a generation of artists are riding a wave of success through pure entrepreneurial hustle. Dripping in gold and trading in sex, reggaeton is more than just fantasy – it’s a marketplace for material dreams.

Cabaret Guanimar, an open-air night-club on the outskirts of Havana, is heaving with bodies, lights and sound. A low cement wall separates the kinetic energy inside from this otherwise mundane thoroughfare in Guanabo, a small coastal town on the eastern shore.

The drive here from the city centre is long and dark; our 1950s diesel car the only light on a dusty road. But there’s a reason so many have made the pilgrimage. Tonight, Cuba’s most infamous reggaeton duo, Chacal y Yakarta, will grace the stage.

Beyond security guards and the long line outside, the club pulses with flashing neon, smoke machines and the muffled uno dos tres of sound-checks as a DJ plays innocuous reggaeton beats barely audible from the street. Chacal, Yakarta and the band sneak in through a secret backdoor and climb the rickety wooden stairs to a small office perched above the crowd. 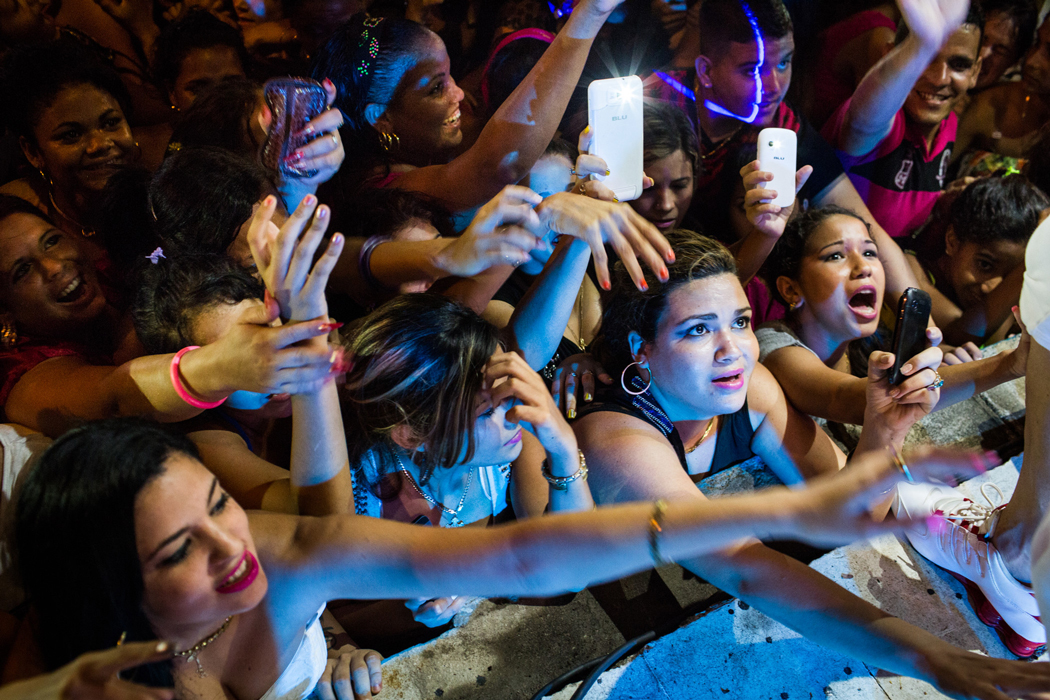 The venue is a state-run venture, meaning low budgets and plundered resources. The band’s “backstage” is a mouldy room of chipped blue paint furnished with nothing but two metal desks. As they pass around a bottle of rum, a cleft-chin Cuban soap-opera star walks in with his date, who heads straight for Chacal to pose for a photo.

Outside, ladies with acrylic nails and cat-eye makeup, clad in skin-tight mini-dresses and four-inch spiked puyas (heels), wait in clusters. The boys wear pleather pants or skinny jeans slung low at the crotch with long t-shirts cut at a slant just above the knees. With heads shaved at the sides and gelled into spikes up top to mimic Chacal’s mohawk, they come to show off the latest trends and prove to one another they’re en talla – in style. This is modern-day Cuba. 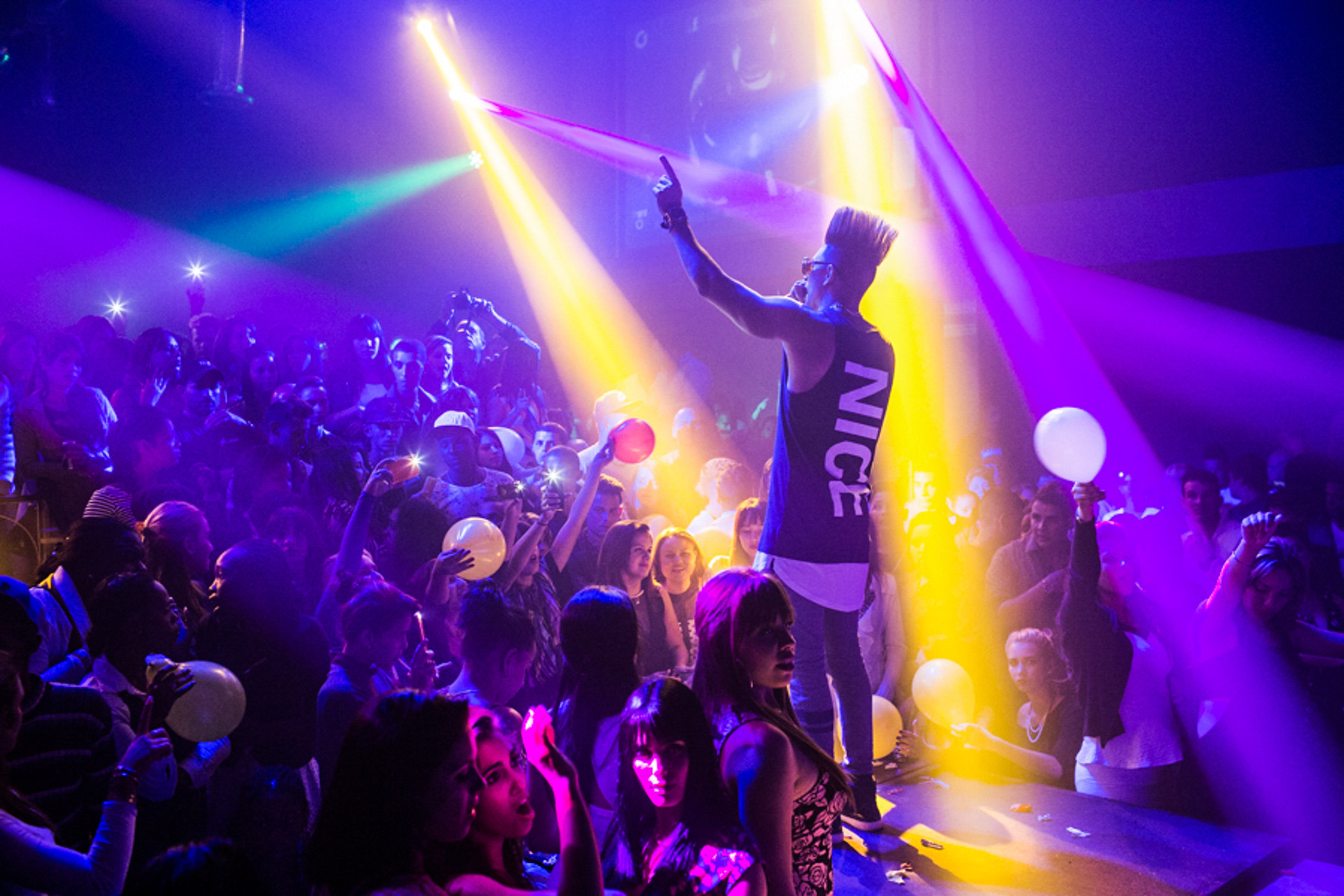 They’ve come to hear reggaeton, a mix of dancehall from Jamaica, hip hop and latin rhythms. It’s known for its repetitive, catchy beat and highly sexualised lyrics. For a time, officials censored reggaeton outright but concerts eventually reopened and today, the ubiquitous sound weaves its way into Havana’s homes and cars on muggy nights and scorching days alike. It’s the soundtrack of life on the island.

In the 1990s, Cuban hip hop boomed. Rappers aired their grievances against the deteriorating economy and the crisis, known as the Special Period, which followed the fall of the Soviet Union. 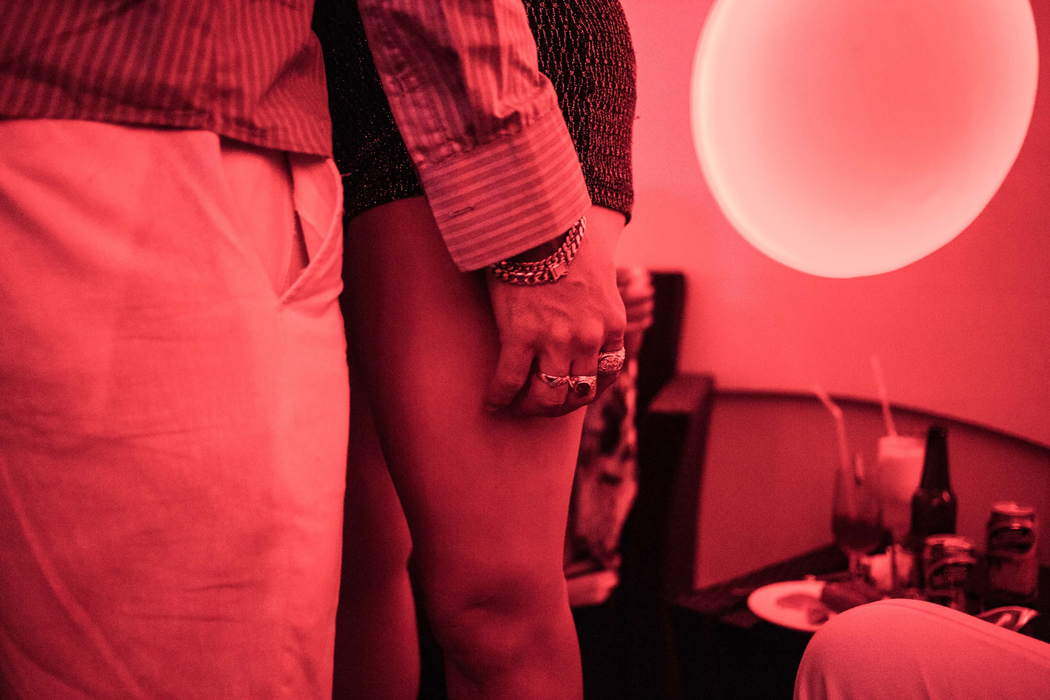 But hip hop, with it’s socially conscious roots, just couldn’t muster that sense of escape. Damian got his start in Cuba’s hip hop movement and admits he’d still rather be rapping today, but once reggaeton took off in 2002, he saw an opportunity and went all in.

“When you’d go to a hip-hop show you would hear about the same problems you had at home,” he explains. “But when you go out, you want to have fun and forget your problems.” 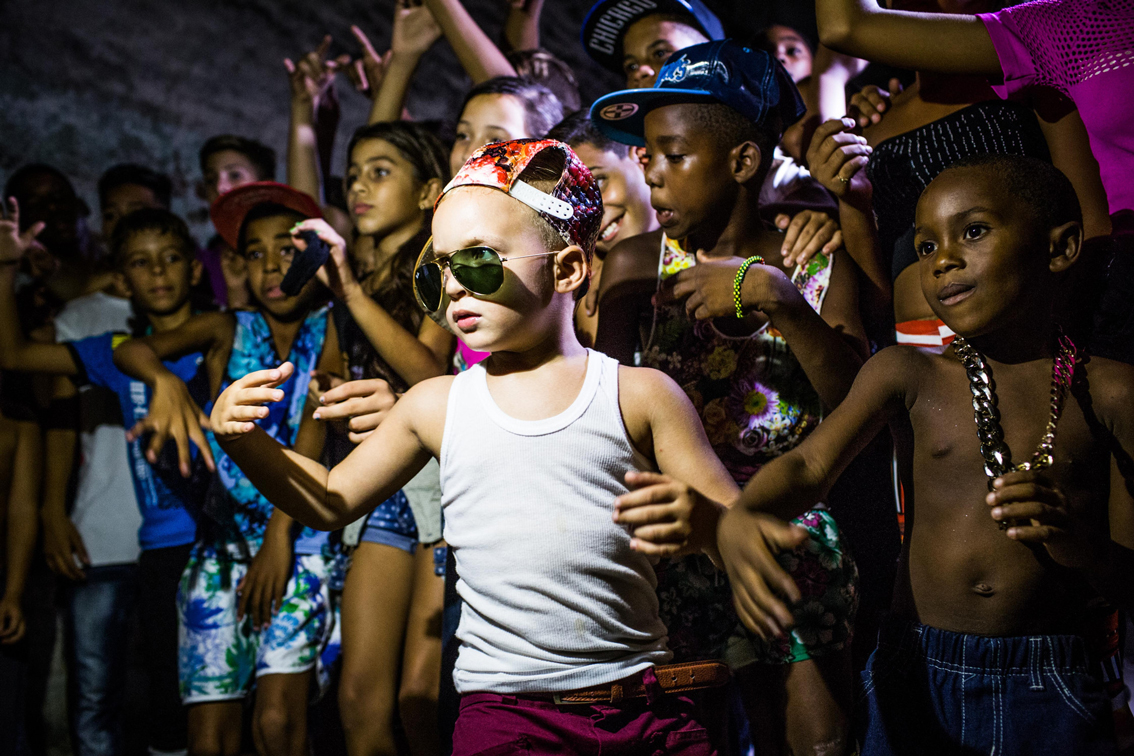 Damian says reggaeton gave Cubans what they were looking for with danceable rhythms. But local artists took it one step further and created a sound that was all their own. Cuban-style reggaeton, or Cubatón, incorporates the traditional clave beat of salsa music. The phenomenon quickly spread across the island, overtaking hip hop.

But in 2012, after a decade of rising popularity, the Cuban government banned reggaeton, calling it vulgar and offensive. The genre is considered the antithesis of the cultural values espoused by Castro’s regime: his revolution upheld arts education in the highest form, producing scores of famed traditional musicians, artists, dancers and poets.

Reggaeton meanwhile, with lyrics promoting casual sex and mistreatment of women, was deemed anti-revolutionary. Soon, it was banned from state-sanctioned radio and TV (the only option in Cuba) and seemed to vanish from the airwaves overnight. 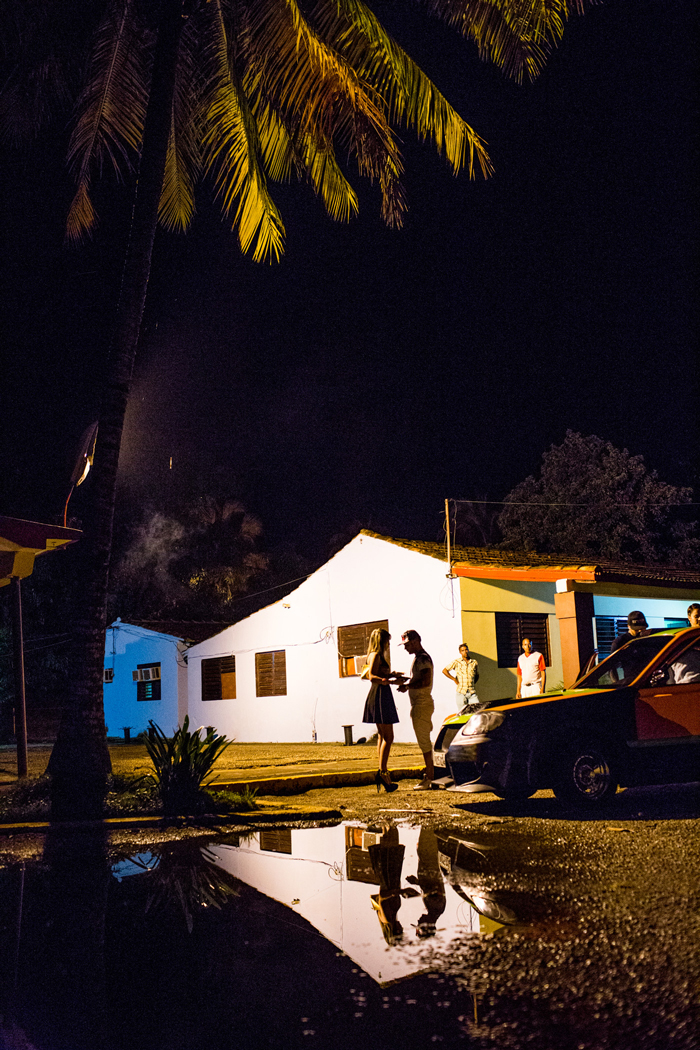 With no official labels to back them, no distribution, no airtime, and the internet still inaccessible to many, listeners found other ways to share the music: capitalising on a burgeoning system called el paquete – a literal person-to-person distribution method where a one-terabyte hard drive of sound files, videos and movies is passed around the country each month via a vast network of delivery people.

Reggaeton artists and their managers began pumping songs and videos into its weekly distribution, allowing reggaeton and el paquete to blossom in tandem.

As a system, el paquete occupies the same grey area as many things Cuban: neither fully legal nor illegal. Those who put it together keep it from being squashed by carefully excluding political content. Anyone with a few bucks can pay to put their work in circulation. 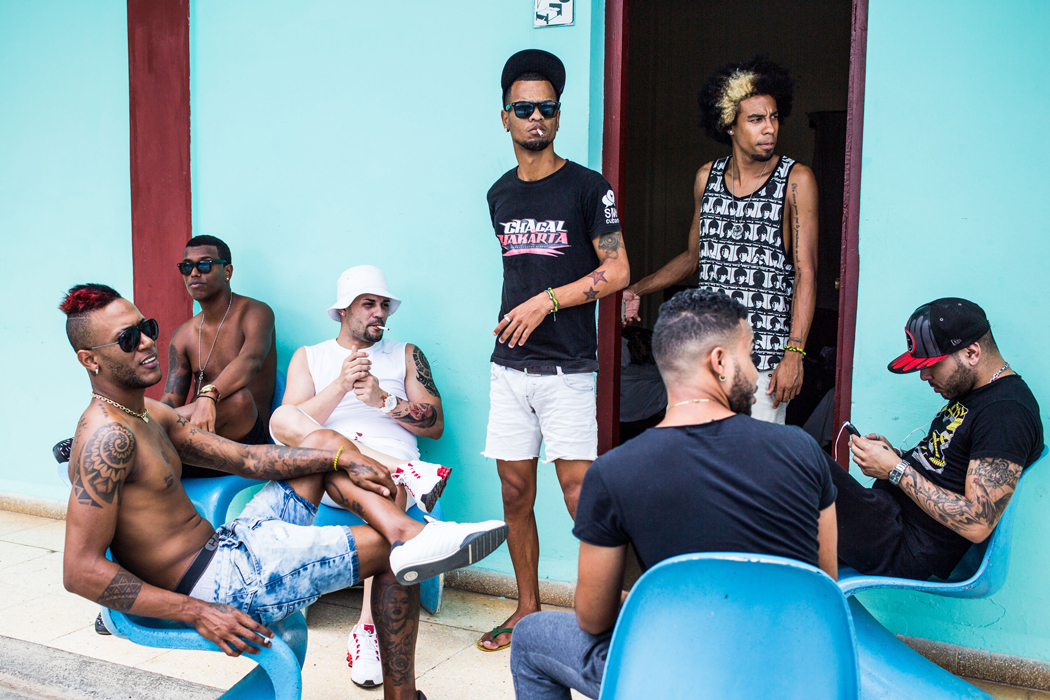 Cuba’s internet consumption is estimated at 20 to 30 per cent and is mostly used for chatting with family members abroad. Spotify or music downloads are blocked by the embargo or near-impossible to access at achingly slow connection speeds.

“Make something prohibited and see how much people gravitate towards it,” says Yuleidis Rojas, director of Lucas, Cuba’s only state periodical that covers the urban genre. She says youth were enticed by the underground element. Once forbidden, it became even more popular.

The genre’s success mirrors a broader zeitgeist marked by freedom of expression; its existence is, in a sense, revolutionary in itself. Just like rock-n-roll in 1950s America, or today’s commercial rap music to conservative ears, it’s been criticised and blamed for eroding moral values among youth. 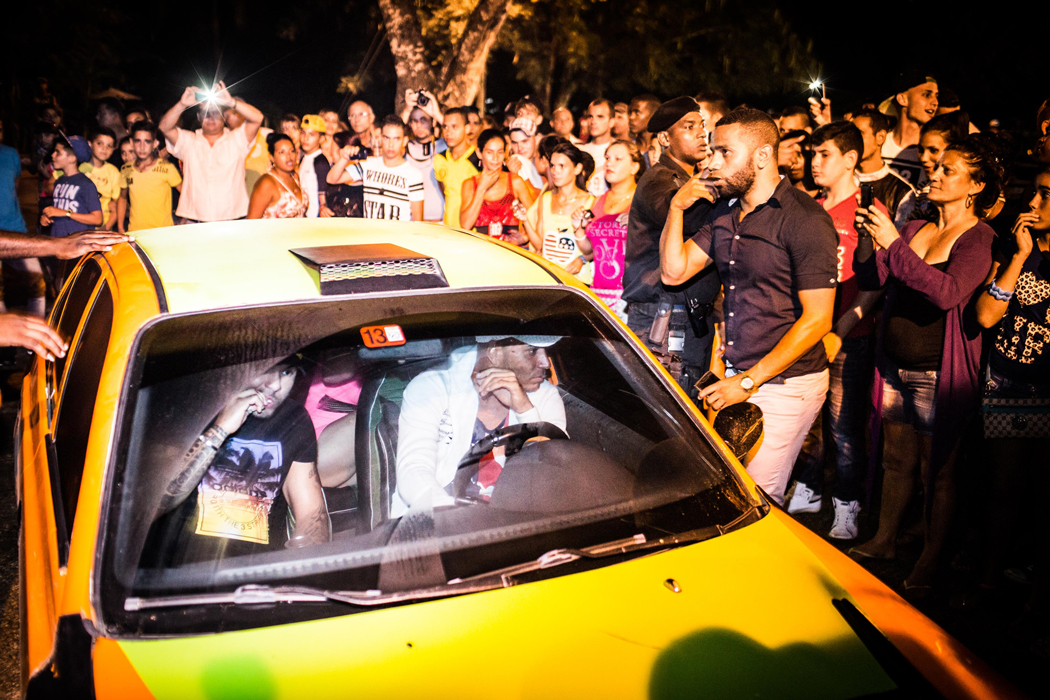 Reggaetoneros spend thousands of dollars on music videos just to turn around and distribute them for free to their fans. They make no initial profit.

“What do we gain?” says Jacob Forever, sitting in his Havana home. “That the public hears our music and comes to our concerts. In other countries, the artist protects their music. Here the first thing we do is give it away so the audience listens to it.” 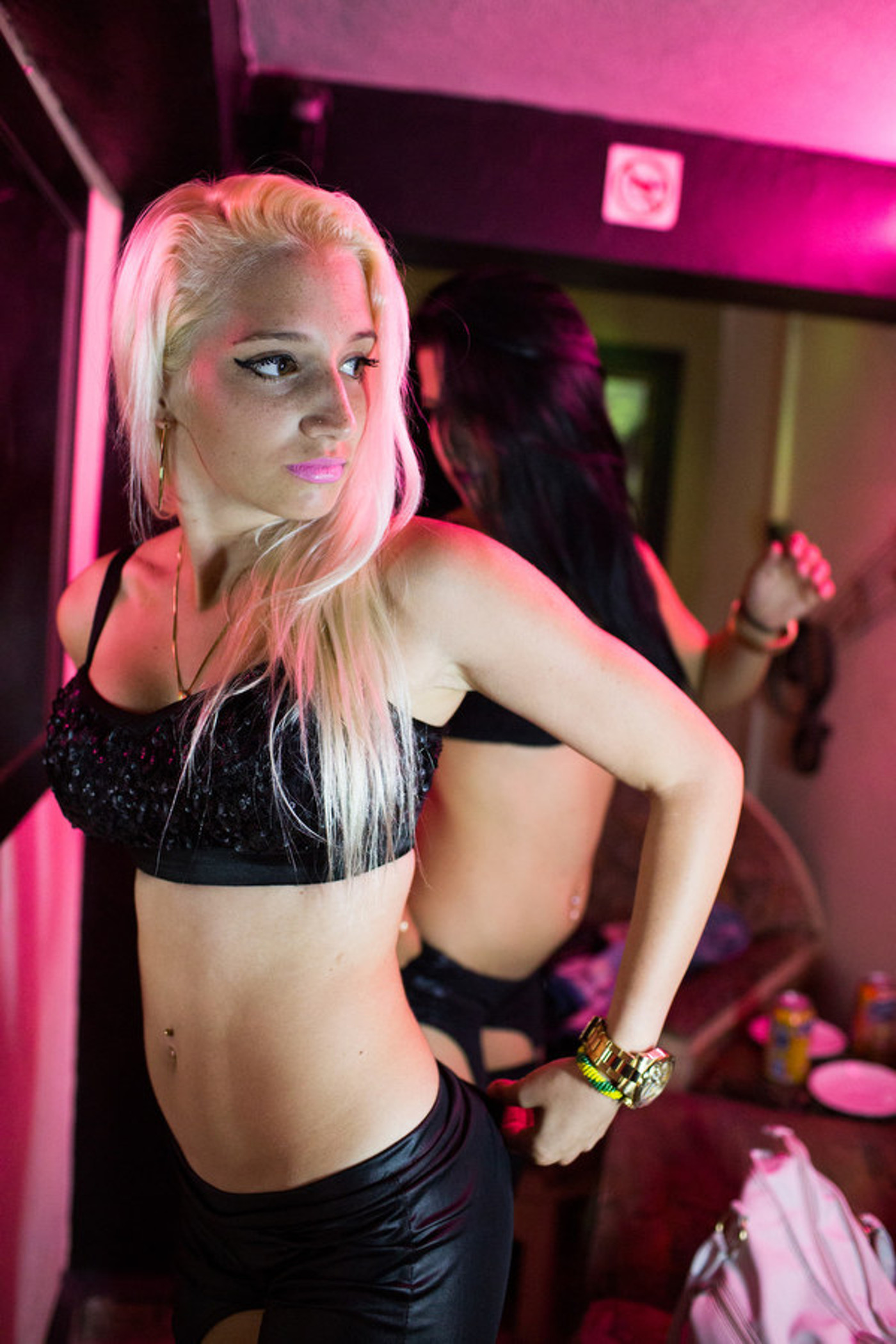 A backup dancer preps for a music video shoot at the home of DJ Unic.

To outsiders, Cuba is a paradise, a fantasyland of retro cars and antique architecture. Hopeful tourists line the malecón, marveling at decaying colonial homes. Americans obsess over seeing Cuba “before it changes”. But for Cubans, the fantasy of Miami life is a recurring dream. Without upkeep, colonial buildings collapse by the dozen; life itself can feel crushing for many, a constant uphill battle.

Daily life in Cuba is the rat race of survival. Every task is an odisea. Life is summarised by locals as la lucha – the struggle. Days go by standing in line for hours, asking “ultimo!” for transport that never comes, bodegas that never open.

Cubans shell out hefty portions of dismal monthly salaries for basics like shampoo, laundry detergent, or deodorant. They buy new clothes from mulas who resell poorly made t-shirts at $20 each. Parties, dancing and reggaeton’s sexy videos present the chance to experience a different reality. 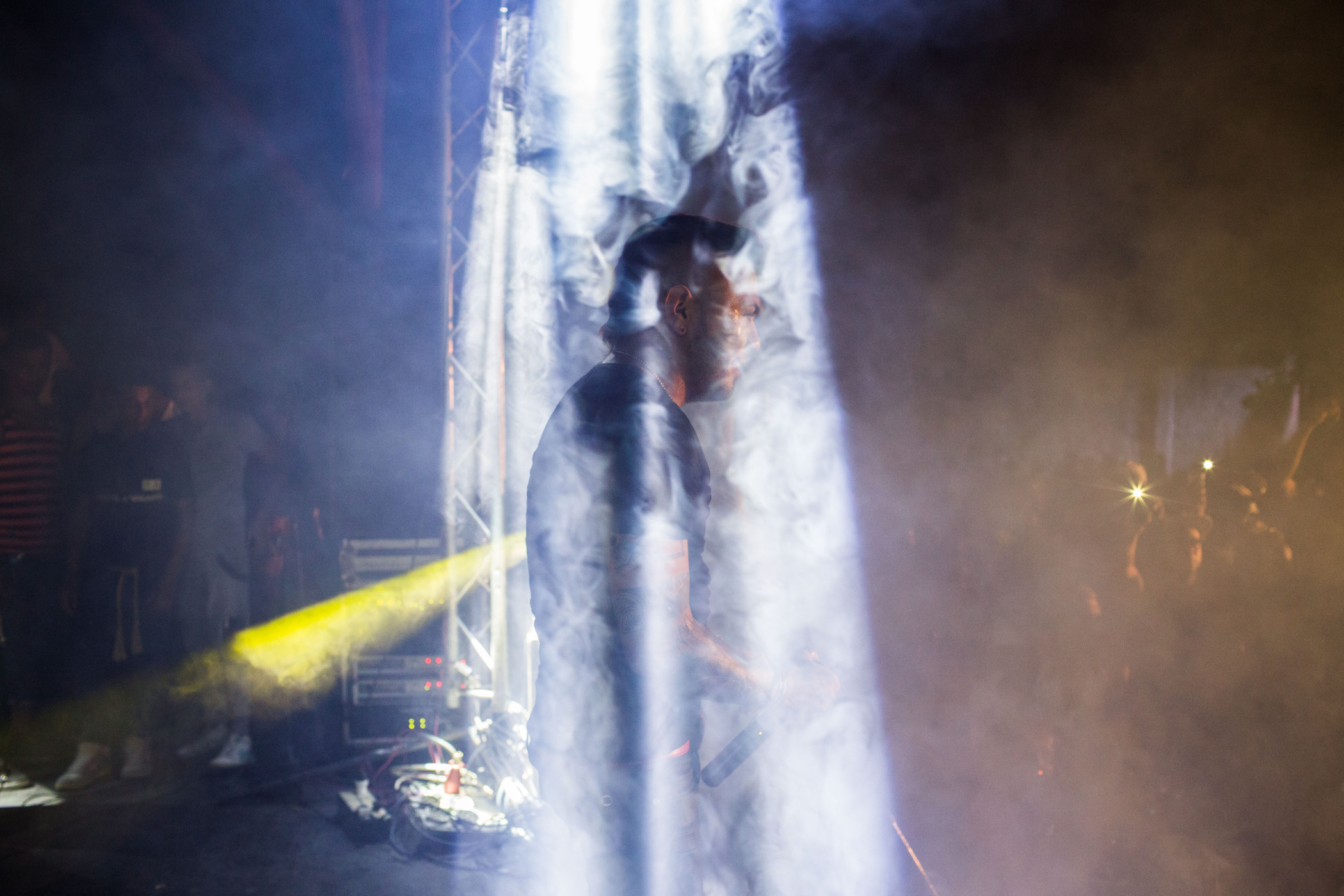 El Chacal prepares to sing his first song at a Havana concert in April 2015. Reggaeton, though wildly popular in Cuba, is banned from mainstream media.

“We’re selling them a dream,” says Damian, even if the life of swimming pools, fancy homes and cars remains forever out of reach to most Cubans. Last year, Damian himself made the move to Miami in search of new opportunity. He now posts daily updates on social media of studio sessions, sports motorbikes, new tattoos and gold chains.

But of all the things reggaeton sells to its fans, sex has become a predominant part of the equation. On a Saturday in Old Havana, singer El Yonki is preparing for a comeback. Rows of teens in bikinis are lining up for the chance at being cast in his next music video, ‘Apululu’ – slang for ‘a lot of something’.

At the elementary school-turned-audition room, girls in groups of five file into the auditorium parading in front of Yonki and several other men. The girls’ mothers wait anxiously outside, peeking through the sliver of an open door. ‘Apululu’ blares from a speaker while the young women diligently shimmy and twerk, doing the perreo to the beat. Dripping with sweat, they glance awkwardly at their judges, seeking approval as the men whisper among themselves. 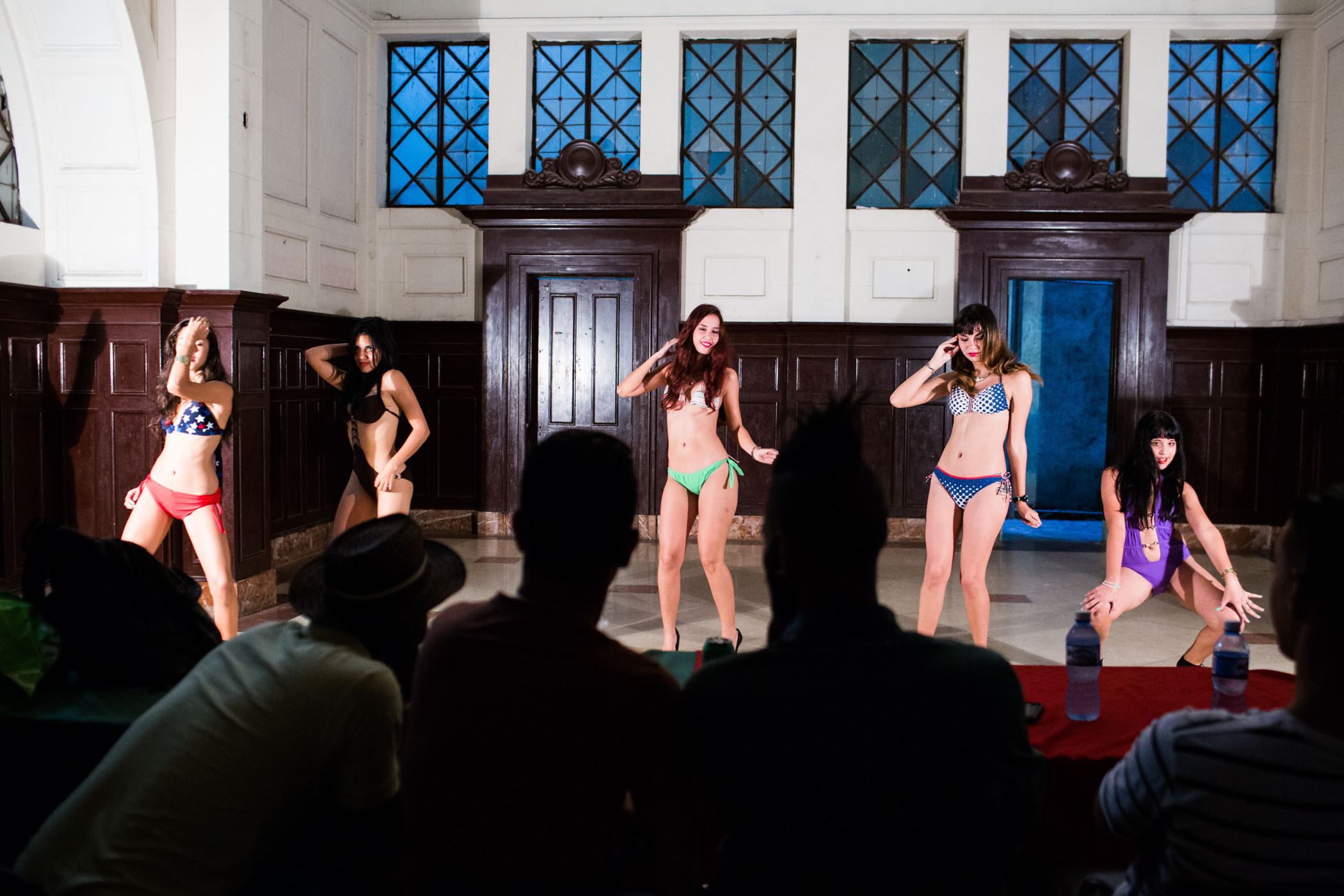 At a public school in Havana, dozens of young girls in bathing suits line up to try out for El Yonki’s new music video. They dance for Yonki and his crew, hoping to be selected as back-up dancers in ‘Abululu’.

Chacal, whose real name is Ramon Lavado Martinez, admits he dreamed of being a singer growing up in the marginalised Marianao neighbourhood of Havana, but got caught up in the wave of reggaeton’s popularity.

Having recently split from wingman Yakarta, he is one of Cuba’s most beloved reggaeton performers. With controversial jams like ‘El Tubazo’ (‘Hit with a Big Pipe’) or ‘Hilo Dental’ (‘Dental Floss’),  his music is the epitome of misogyny. He says it’s what people want.

When asked where he garners inspiration, Chacal answers: “I make music pa’ la calle – for the street.” Because his audience is from the street, he explains, he caters to them with his lyrics and sex appeal, and it works. He’s a sensation. It’s as if female fans – normally strong outspoken Cubanas – suspend their beliefs in equality for the thrill of being caught up in the moment. 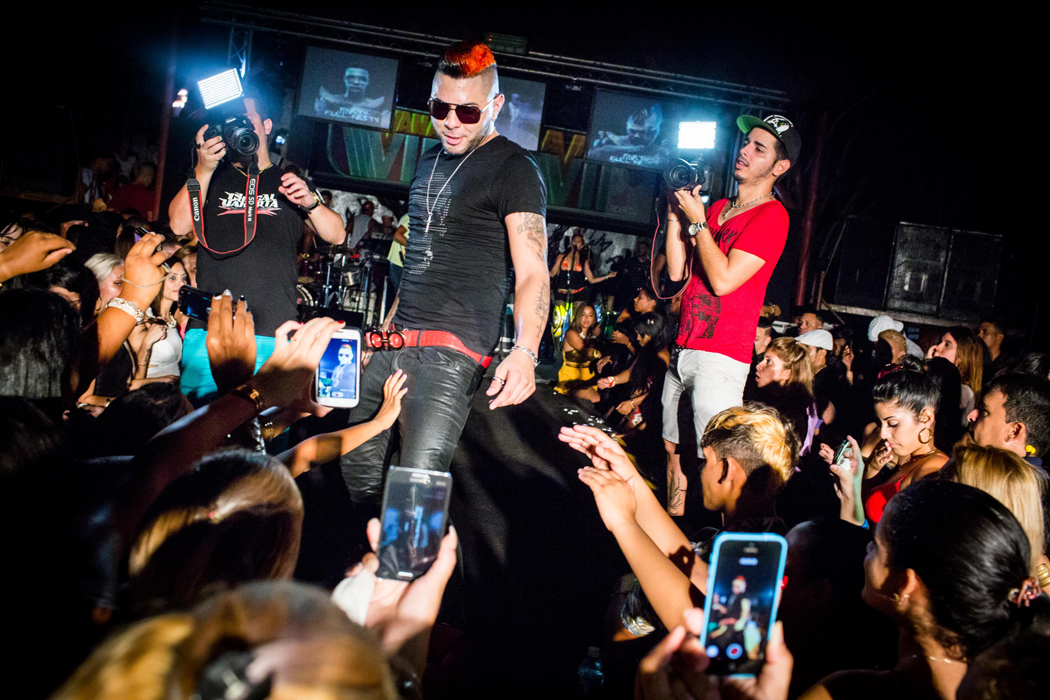 Back at Guanimar, below the band’s makeshift ‘green room’ with the peeling blue paint, the crowd begins to pile in to see Chacal y Yakarta  perform together one last time. They make their way through sets of plastic white tables and chairs until they reach the front. They’ve saved up for this, having paid $10 cuc when the average monthly salary in Cuba is $30 cuc.

For concertgoers, stepping inside is like being whisked away to another world – one where the crowd becomes electrified with a desperate energy as soon as the music begins.

Chacal is already sweating before he steps out. A spotlight cuts through the fabricated smoke before settling on his red mohawk. The band plays an intro. Women in the front rows frantically push forward as Chacal air-humps his way down the catwalk to the beat of his signature songs. 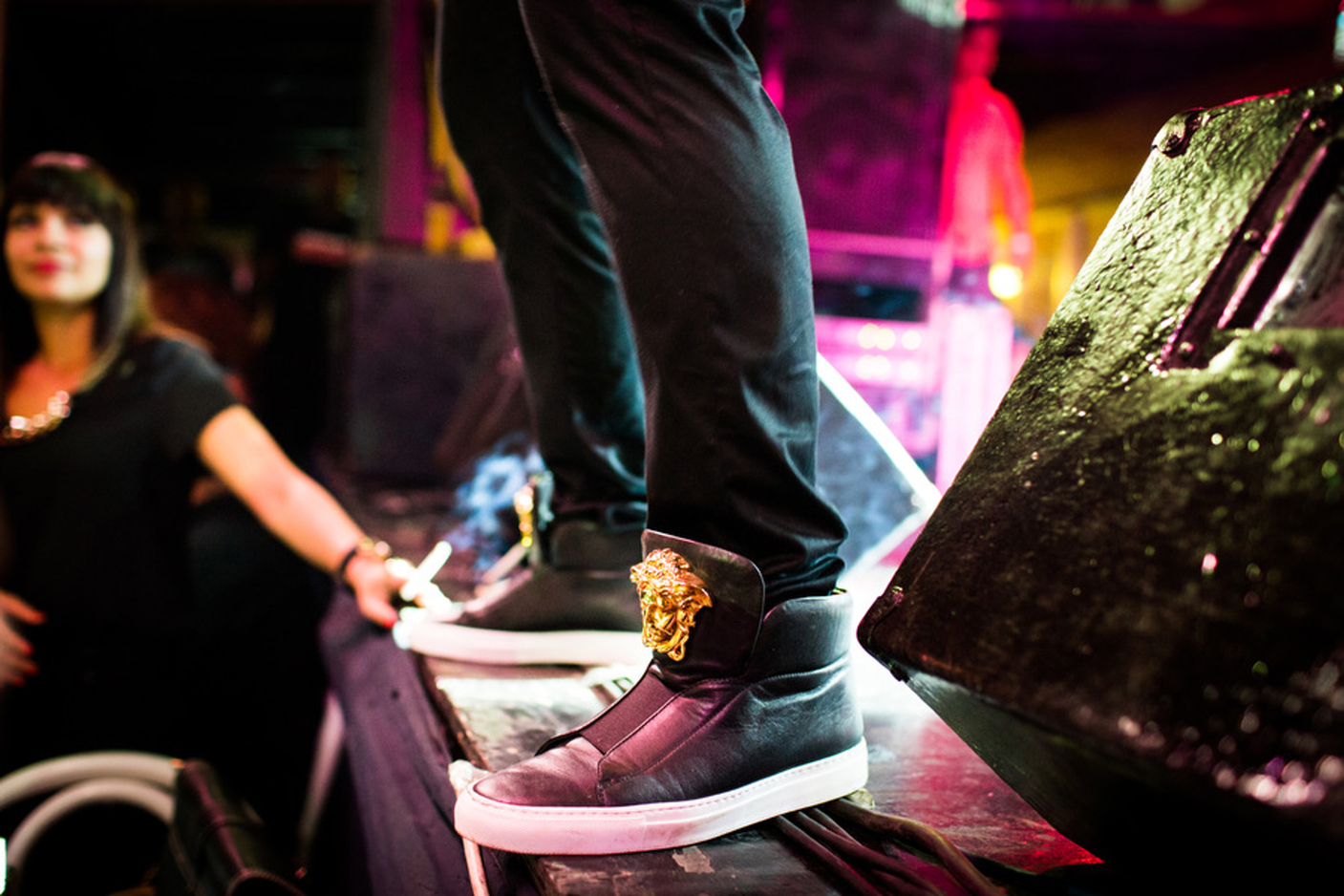 Yakarta follows along: he leans in, showing off his tattooed biceps and tank top, and touches as many hands as he can. One woman opens Chacal’s belt; another fans off his crotch with a Spanish style habanico as his pelvis thrusts in her face. They can’t get enough.

Surrounding the scene, locals catch a peek from their dilapidated rooftops; palm trees sway in the damp Havana air. The night jumps with flashing lights as the skillful sound of trumpets and bass blasts out from high-tech speakers.

Caught up in the moment – the heat, humidity, and gyrations of fans booty-dancing, making out and grinding to the music – it’s easy for a few minutes to forget where you are. It’s easy to forget you’re still in Cuba.

Linkedin
RELATED ARTICLES
OTHER ARTICLES
Rhiannon Adam spent three months capturing an ageing society wracked by division, isolation, and the aftermath of scandal.
Ahead of the release of their first collaborative album, the producer and rapper talk psychedelics and the state of UK hip hop.
The idea that a younger generation is abandoning work has become a popular narrative online, but it doesn’t necessarily reflect reality.
Thousands attended the annual event this year to wheelie through the city and call for ‘knives down, bikes up’.
A group of young Palestinians have found temporary freedom in the act of parkour, reimagining wreckage and ruins as a series of high-octane playgrounds.
As the Scottish government announces a rent freeze, an activist with Living Rent who fought and won shares how they did it, and what must come next.