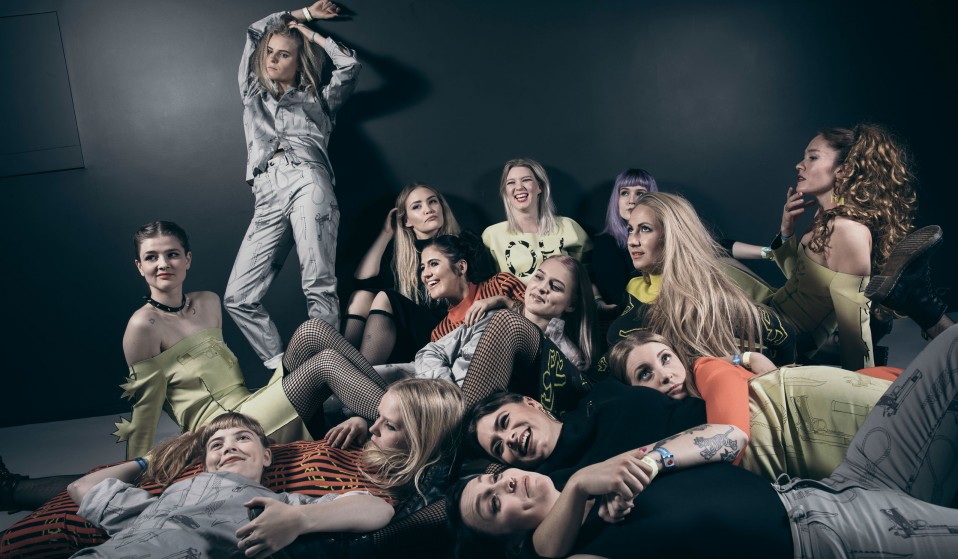 With songs about slut-shaming and body positivity, Reykjavik's punkest hip-hop crew are finally putting the country's female rappers on the map.

With songs about slut-shaming and body positivity, Iceland's punkest hip-hop crew are finally putting the country's female rappers on the map.

Until recently, there were no female voices in Icelandic hip hop.

For all the genre’s growth over four decades, its national scene remained insular and male-dominated.

“One female rapper released a song and she got so much hate for it,” says Bergþóra Einarsdóttir, now known as MC Bein. “But that hate flared up the willpower to do something about it.”

They tell their friends they’re going to hold a female hip hop night and word spreads around town until all the schools are talking about it.

A private Facebook event is made public and over 200 people turn up to a 50-capacity basement club. Ten women perform, many for the first time, and the audience includes plenty of future bandmates.

More nights follow, and a video produced to promote the third event inadvertently becomes the first official song of Reykjavíkurdætur (The Daughters of Reykjavik): an 18-strong collective of female rappers. 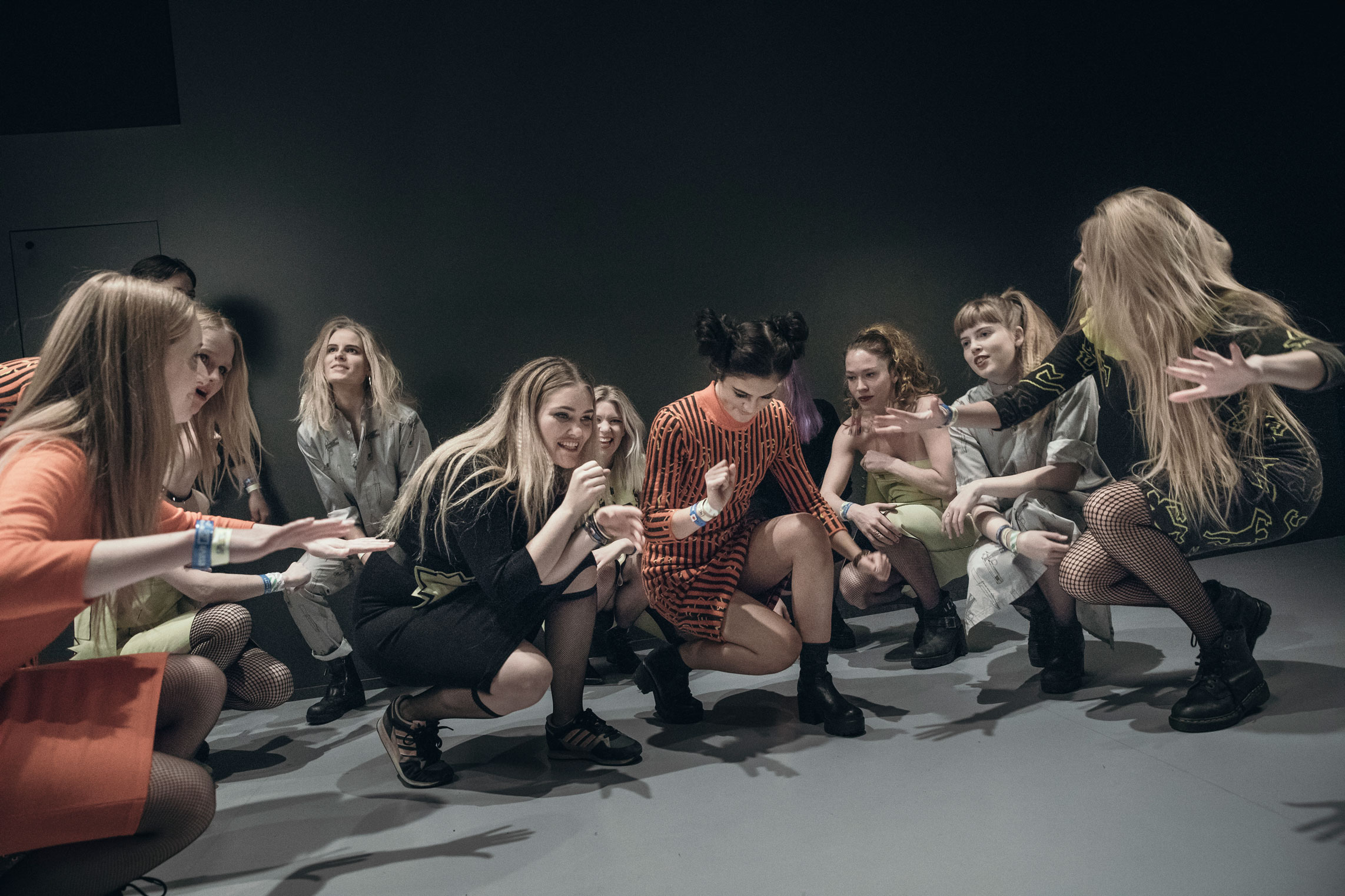 “In the beginning especially, the magic was the support, because we were taking big steps – going up on the stage with basically nothing. We weren’t doing it to get attention. The idea was just to enjoy it, to support each other, and that’s what’s kept us together.”

Two members of Reykjavíkurdætur (Bergþóra and Anna Tara) are squished together on a couch, with their manager Alda Karen in-between them, having just finished a band meeting.

Dressed in sweatshirts and hoodies, they look like they’re ready to settle in for a cosy night of Netflix. Alda is a petite and excitable 23-year-old, regularly glancing over to Anna and Bergþóra for approval rather than the other way around.

So far their journey together has involved playing shows across Europe, riling up a generation of male rappers, and racking up hundreds of thousands of YouTube plays for their confrontational songs about slut-shaming and sexual violence.

They even told the Icelandic Prime Minister to “suck my pussy” live on national television and crowd-funded their eponymous debut album.

But for all the emphasis on togetherness, their individual identities remain distinct. It’s what makes the chaotic energy of their live shows enthralling: there’s so much going on that you don’t quite know where to look.

Rappers take turns stepping into the spotlight, spitting a verse or two over minimal beats before ducking out again. 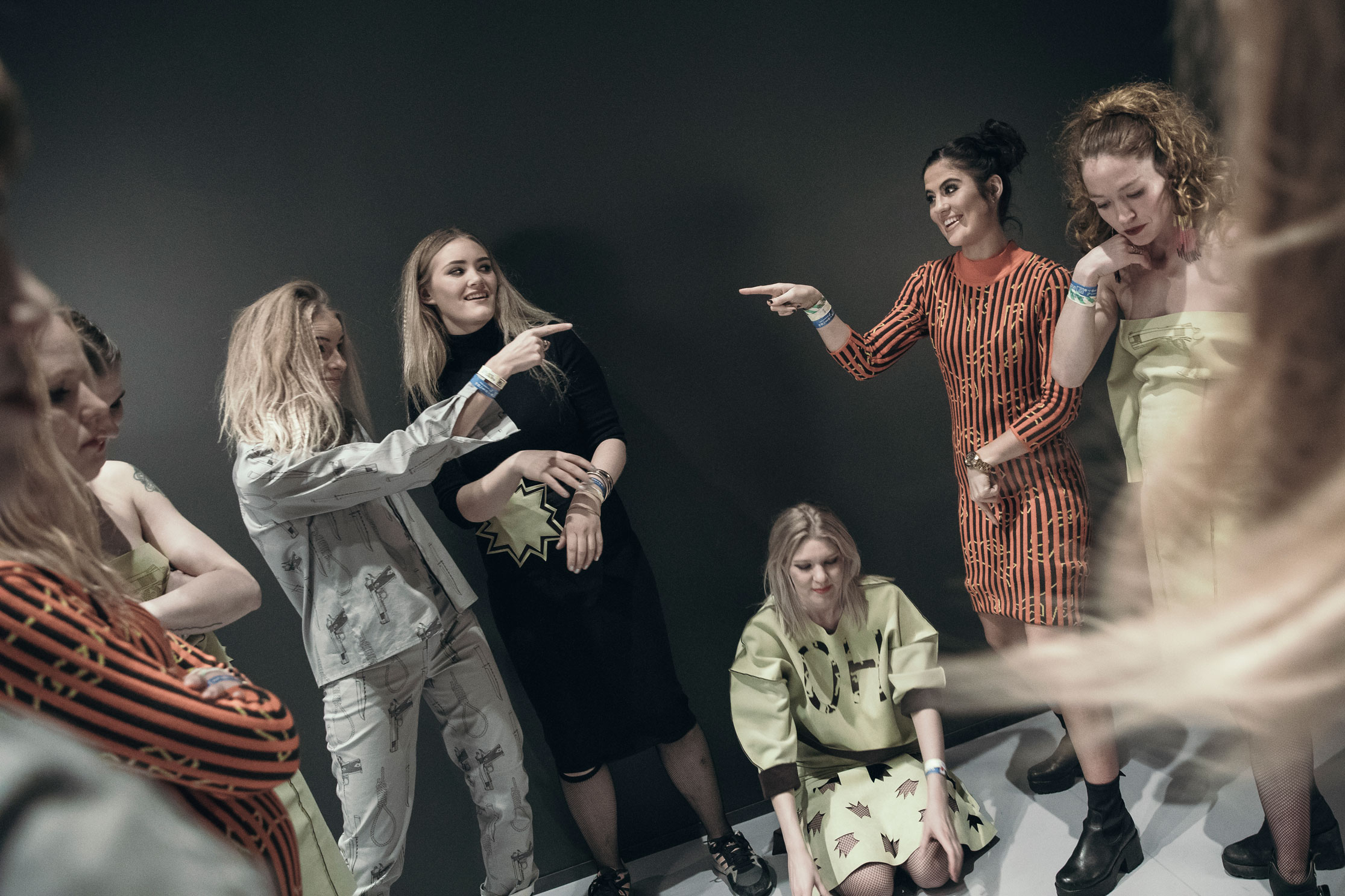 There are moments of coordinated anarchy – a synchronised freeze-frame of aggressive poses, for example – but mostly the Daughters do their own thing while spurring each other on.

“We try to remain a collective rather than a band so that we can keep our individuality,” explains Anna, leaning forward with a huge smile, her long blonde hair hanging freely.

She’s the loudest of the three but never so much that the other two don’t pipe up. “The public always speak of us as a whole but we never all agree on one thing.”

Visually, that can make for a bright mess of self-expression – metallic pencil skirts; fake-fur waistcoats; oversized black T-shirts and fishnet stockings – but at last year’s Iceland Airwaves, they found another way of using their appearance to make a statement.

“We felt like people were giving our clothes too much attention so we wanted something completely neutral,” says Anna, who’s 26. “It ended up being that type of underwear that’s supposed to keep your fat in.” The outfits were interpreted as a protest against body shaming – a double meaning which the women embraced.

“I felt naked the whole time,” says Bergþóra, “but I heard stories from women afterwards saying they felt better about their own bodies when they saw the variation on stage.”

That ability to make other women, on stage and off, more comfortable with themselves forms the collective’s core.

Partly it’s the sheer spectacle of the performance that does it – a crowd of young women expressing themselves unapologetically; being loud, brash, smart and beautiful simultaneously.

But it’s also the songs themselves, which often tackle feminist issues like victim-blaming and political corruption. But as Anna points out, even their songs with no explicit meaning are inescapably punk, purely because they’re young women creating a voice for themselves.

“Men can have songs about nothing, but a group of women are always expected to have a point,” she says, laughing. “So when we made our the song ‘Ógeðsleg’, we based it around the theme of the ego. It’s all just about how cool we are.”

The Daughters hope such confidence will inspire the next generation of Icelandic girls, and they’re not just relying on their music to make that a reality.

The collective still extend an open invitation to anyone brave enough to join them, hosting open-mic rap nights for young women who need a safe space to experiment – just like the original basement shows.

When we speak, they’re planning a workshop at one of their gigs in Norway, complete with rap lessons.

“It will be a three-day event with discussions about feminism, female empowerment and women in music,” say Bergþóra.

They decided to make it female-only, Anna adds, “because it makes the atmosphere more creative for those taking the first steps in something. It’s safer, somehow…

“But if guys want to learn about feminism, women empowerment and rap…” She pauses, breaking into a laugh. “Then we’ll take them with open arms and hug them and kiss them until they can’t breathe.”

Linkedin
RELATED ARTICLES
OTHER ARTICLES
Following the announcement of an 80% hike in the energy price cap from 1st October, crowds gathered outside the offices of energy regulator Ofgem to protest and declare their intention to undertake a payment strike.
Birdy Chu reflects on documenting the historic moment in which the territory was formally passed back from the UK to China.
Yesterday thousands gathered outside Buckingham Palace after news of the Queen’s death broke.
As the Scottish government announces a rent freeze, an activist with Living Rent who fought and won shares how they did it, and what must come next.
Ahead of the release of their first collaborative album, the producer and rapper talk psychedelics and the state of UK hip hop.
In his 2008 series, the photographer pictured himself as Angela Davis, Martin Luther King Jr., Malcolm X, and other prominent figures.