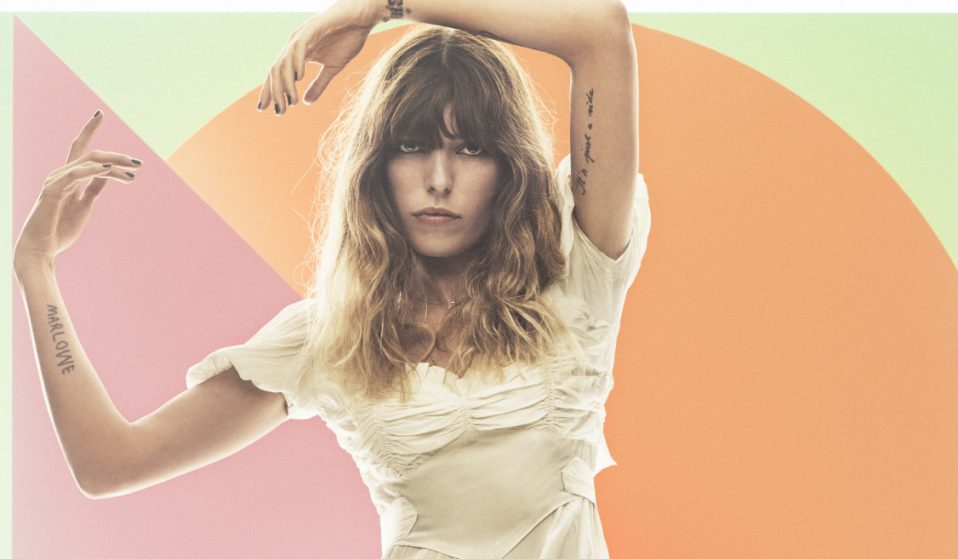 We catch up with the singer ahead of the release of her third album Soliloquy to talk politics, French resistance, and the power of the Insta DM.

We catch up with the singer ahead of the release of her third album Soliloquy to talk politics, French resistance, and the power of the Insta DM.

The Kings Cross hotel I meet Lou Doillon in has, by her own admission, a “very after work, loud music, men in suits” vibe. In another life as a copywriter I’ve written about this chain, and the first brand characteristic on the style sheet is “masculine.” It’s all dreary rounded geometric shapes and orthogonal furniture in off-brown, like Matisse cut-outs made with one shit-coloured piece of paper. The advantage of the hotel’s proximity to Eurostar means Doillon can hop on a train back to Paris as soon as her press commitments are through. (A detailed description of the hotel means there’s now no room now to describe in scrutinising detail what she’s wearing, a bugbear of hers which she says only really afflicts female interviewees. There’s just enough room to say she looks radiant, and somewhat incongruous, in a lobby full of cheap-suited man-spreaders).

Doillon is about to release her third solo album, Soliloquy, and not only is it her best album, it’s also her bravest. While the name implies intimacy with the audience from a single player, the cast behind the record is multifarious. She took the decision to work with a number of producers, from Dan Levy of The Dø to Chan Marshall aka Cat Power, a process that could have led to a lack of cohesion, but was in the end a boon, with her taking matters into her own hands with the help of Benjamin Lebeau of The Shoes. There are very different producers pulling in different directions, and yet somehow it all works together.

The singer’s work so far has been about her smoky vox sat atop an electric folk mise en scène; Soliloquy started from rhythmical, rather than acoustic, beginnings, which means you can forget most of what you already know about Lou Doillon. One thing you probably know is that she is the daughter of Jane Birkin and the half-sister of Charlotte Gainsbourg; although in her native France, this is no longer spelt out in every article because she’s very famous there. If Soliloquy receives half the success in the UK that it deserves, then articles about her here will soon be able to dispense with this detail.

The new album is a lot more outward looking than your last record, Lay Low. Had it – as the title implies – all become too much?
I think so. The success of the first album [Places] was a massive surprise. Success is beautiful and terrifying at the same time. There was this idea that I’d somehow arrived… somewhere. Also my personal life was complicated, which is why I left for Canada to work with Taylor Kirk from Timbre Timbre. And we did a more earthy, more terrestrial album, with loads of organic instruments, and everything was recorded live and it was very intense and serious… which I loved, but I think now that I’ve got a third album, it helps you see the second album in a way, and now I see there was a closing down.

On Places, you sculpted your sound very deliberately, with Etienne Daho producing. Was Soliloquy almost the opposite of that?
I wanted to be bolder. I went into the studio with a wonderful guitarist who I love, Benjamin Lebeau, and Nicolas Subrechicot – who’s my keyboard player on stage, but who’s also a wonderful drummer – and we recorded the songs with lyrics and drums, then added the electric guitar. When I came out of those sessions, everyone was freaking out: the label, friends around me, thinking, ‘that’s very radical.’ That’s what everyone kept saying. I was like ‘no, no, this is a starting point’. And from there, I thought I might be able to reach out to producers who wouldn’t have worked with me had I sent them something more fragile.

I’m not surprised you approached it that way, because the album is quite rhythmical.
It was a very different architecture; it could hold stranger and more modern sounds.

Hasn’t he moved to the country to get away from it all?
That was what was fun. Benjamin Lebeau is this punk nutter who I adore, but he would only record in a warehouse in Paris at night with the sound at a very high volume. I literally thought my ears were bleeding the first night I worked with him. Then I would go to the country with Dan, who works in absolute silence. He only works during the day, does sports in the morning and is a vegan nut. To go back and forth seeing the songs being dragged one way and another was so much fun.

Working with such different characters could have gone wrong, couldn’t it?
Terribly wrong. They are both very dominant in one way or another. I was sweating for seven months thinking: ‘you’re mad, this is never going to go anywhere.’ It felt like having all these insane ingredients, like one of those buffets where families go where Chinese food sits next to paella.

I hear you approached Cat Power via Instagram. How did you end up collaborating together on ‘It’s You’? Did you go to America?
I realised we’d never find studio time together, so I sent her the Protools session with just the guitar and voice, the lyrics and a long email explaining what I could imagine, two pictures by Dorothea Lange of women I liked very much, saying, ‘maybe this could be inspiring?’ It’s quite terrifying working with someone you really love and adore because you never know what’s going to happen. A couple of weeks later she went into a studio without me, and sent me what she’d done the next day. I was so happy. It was really, really lovely, and maybe better than if I had I been there, because perhaps I would have influenced her in one way or another.

The wonders of technology.
But actually it felt very old fashioned, like a game of Exquisite Corpse. I sent something to her, she added something and sent it back, I sent it back and so on, which is actually pretty old school in a way to just have this strange postal creation.

There’s a reggae feel to ‘Last Time.’ You lived in the Caribbean, didn’t you?
I did for nearly two years, at a very important time of my life when I was a teenager. Back in those days, we didn’t have the internet – we only had the local music, or charts from America on about a year-and-a-half delay. I always liked reggae but I always loved ska. When it’s too sunny it turns me off a bit. I was raised some of the time in Brittany, so I also like to see things from a rainy side.

Did you like Serge Gainsbourg’s reggae albums? Did you even hear them much growing up?
I didn’t hear them much, because in the family, nobody was playing their own stuff. So sometimes I discover it in random places, like in a bar a couple of weeks ago I heard some songs I’d never heard from that album [Aux armes et cætera] before. It’s always good when you have two things that collide. I love it when Lana Del Rey works with rappers. I suddenly find it very interesting, this kind of Lana Turner figure suddenly arriving on a rap song. I love those confrontations, so Serge doing reggae is something that’s unexpected and really cool.

How are you coping with the Gilets Jaunes demonstrations as a resident of Paris? There’s support from writers like Édouard Louis, but the movement as a whole doesn’t feel very progressive. From the outside it’s confusing.
It’s very difficult to talk about the Gilets Jaunes because they themselves have not decided what they want or don’t want. So it’s more a general protestation, and in that sense, it’s not very French. It seems to be in every country that people are fed up, pissed off, tired, and it can come from very many reasons and takes on all sorts of forms, and the terrible thing would be to just ditch it off. It’s like when Paris always thinks it knows what France wants. No, let’s listen to everyone. I think we all need to be able to communicate again. It’s clearly a worldwide problem: our relationship to the press and new media, to fame and money; everything is changing. Strange times.

I lived in France during Francois Hollande’s tenure, it was a dark time –and his haplessness didn’t really help. Does everyone hate Macron as much as they hated him?
In my short life, I’ve never seen the French happy with the person they’ve elected. It seems to be a trademark – we’re very good at saying ‘no.’ Say ‘yes’ and everyone’s split.

You were a successful actress before you started your music career. There’s lots of activity on your Imbd profile which then stops sharply in 2012. Do you ever get the urge to tread the boards again?
I would love to. It’s strange because the two things really don’t go together. In my opinion, a good actress has the generosity to give herself to a story and to a director. Already being a writer, singer and performer, it seems like two very opposite things. Now what I do is starting to feel a little clearer after three albums, maybe now I would have the generosity to go back to being part of someone else’s project. What was exciting with the music was learning how to make it your own project, which was very new to me. I guess that now, it would be quite lovely at the end of this tour to be part of a project where I’m not responsible for it.

Soliloquy is released this Friday via Universal Records.

Linkedin
RELATED ARTICLES
OTHER ARTICLES
In the UK, Hongkongers are continuing to stand in solidarity with the pro-democracy movement.
From the queues outside to the last ones standing, Francesco Mellina’s new photo book follows a night that has gone down in the Northern-Soul history books.
Photographer Alice Mann reflects on capturing the camaraderie and discipline it takes to succeed in a highly-competitive sport.
The internet furore surrounding a certain NY-based furniture designer should make us question whether condemning people in the harshest possible terms harms more than it helps.
Photographer Melanie Nissen recalls capturing the characters, fashions and rarefied chaos of a rapidly-expanding set of punk bands who helped to redefine the genre.
While the popular news aggregation service has been kicked off Twitter, its demise does not spell the end of digestible misinformation.