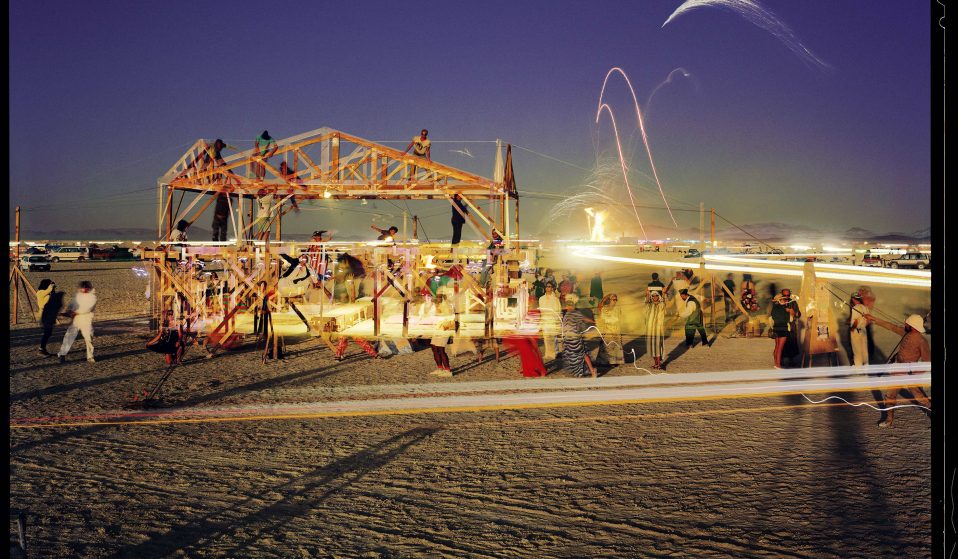 Built as an experiment in radical self-reliance, Burning Man has become a Silicon Valley-sponsored plea to be seen. Art photographer William Binzen, the man behind the festival’s early aesthetic, examines where it all went wrong.

Built as an experiment in radical self-reliance, Burning Man has become a Silicon Valley-sponsored plea to be seen. Art photographer William Binzen, the man behind the festival’s early aesthetic, examines where it all went wrong.

“How could any life experience-enhancing social machine remain the same as it began – a few handfuls of artists and bohemians following a treasure map to a vast vacancy, flying beneath the radar?” muses William Binzen, the art photographer credited with influencing the ethos and aesthetic of Nevada’s Burning Man Festival.

As we speak, he spins stories of hedonism and spirituality, chaos and connection – notions that characterised the early years of the festival. But how have these intentions fared in the event as it stands today; a temporary city of 70,000 inhabitants that rises out of the Nevada Desert each year?

In 1990, the San Francisco Cacophony Society – self-described as ‘a randomly gathered network of free spirits united in the pursuit of experiences beyond the pale of mainstream society’ – organised what was known as Zone Trip #4: Bad Day at Black Rock. That year, around 90 people, including Burning founder Larry Harvey and his wooden man structure, cruised in a convoy from the city out into the Nevada Desert, in search of absolute freedom. Once they found their perfect spot, a line was drawn in the sand. There, an entirely new realm, where the normal rules of reality were askew or missing, began. And so did Burning Man. 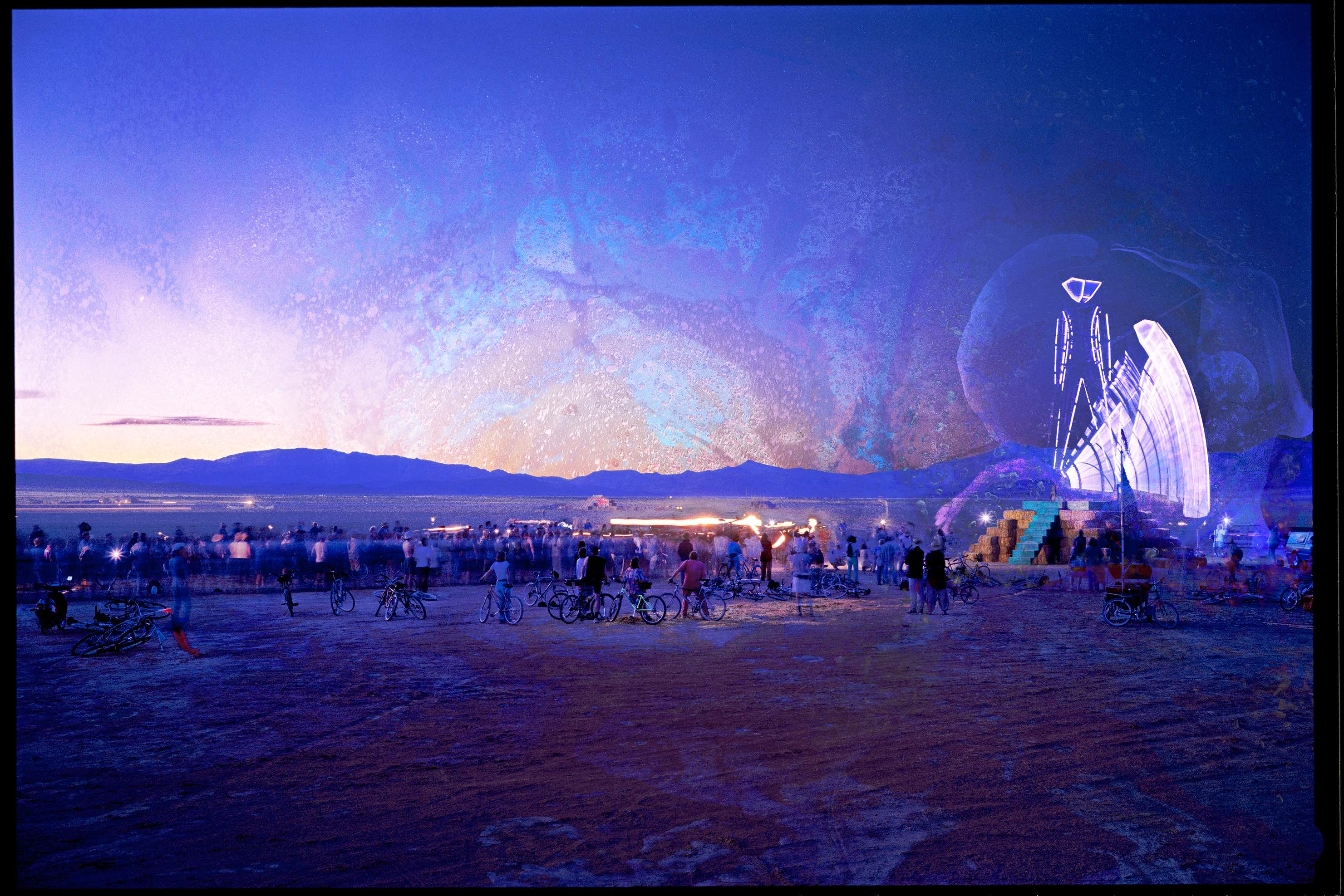 “The first couple of years were not much more than a three-day tailgate party,” remembers William. “The infrastructure was primitive, people housed themselves in tents and a few vans. There were no RVs. Boom boxes littered the playa but there were no rave camps with walls of sound. Everything was ad-hoc; you went with your friends and did what you could and what you wanted to do… It was a redneck form of freedom.”

Then in 1992 William, along with partner Judy West, initiated Desert Siteworks (DS) – an experiment in temporary community and collaborative art as life. The events ran for three years, taking place at various hot springs across the playa before Burning Man. By inevitable osmosis, DS collaborators united with Burning Man, bringing with them the artistic and spiritual pursuits that had previously been lacking.

“The core of the DS approach was to use art as a transformative vehicle, and then to bring that back into society,” Nancy Binzen, William’s wife, explains. “In the early days of Burning Man, everyone was a participant. There was always the idea that some meaningful transformation could happen.” 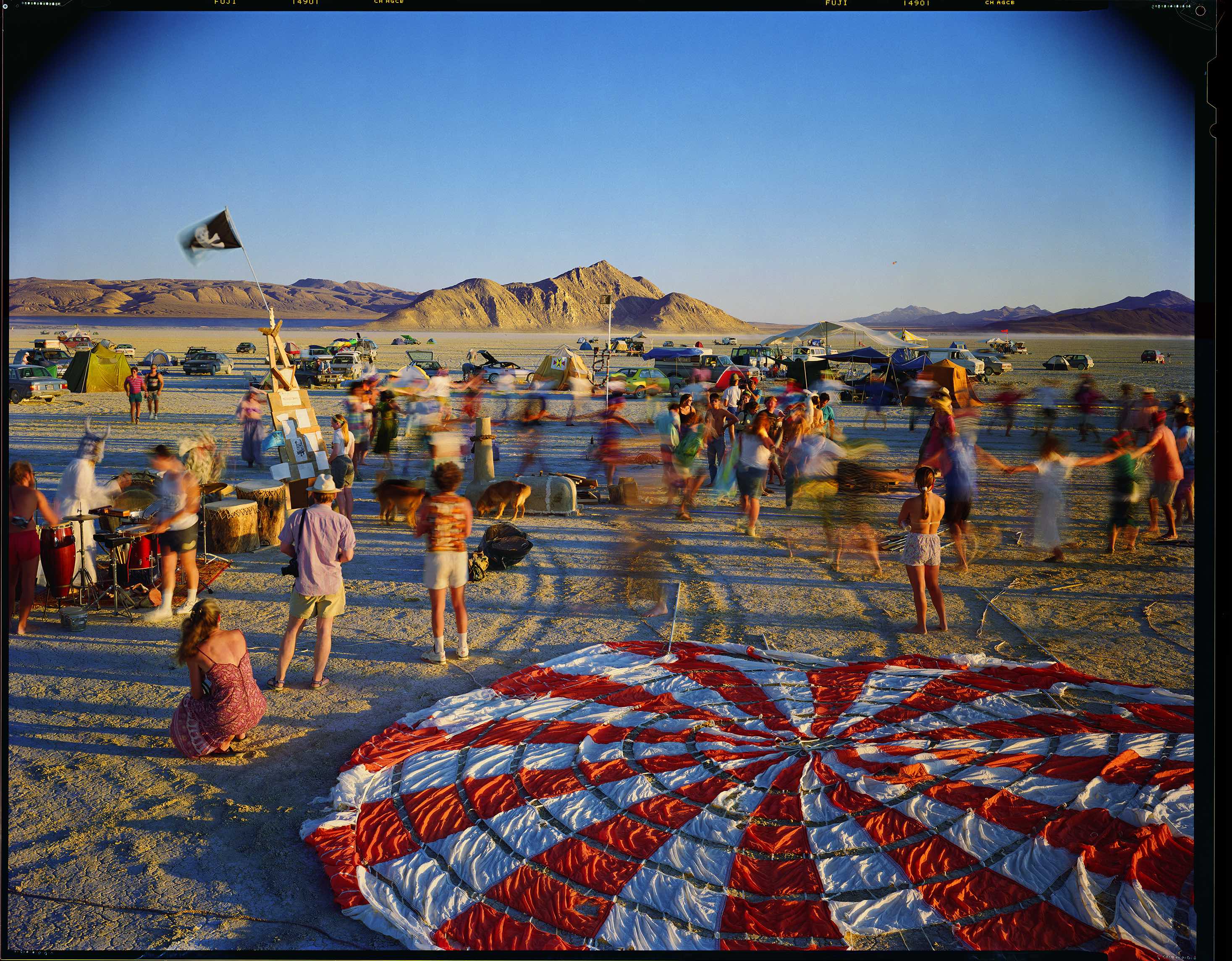 Shrines, communal spaces and participatory art experiences began to emerge from desert dust, bringing purpose to the chaos that had proceeded it. “Over time, the actuality of total freedom and collective transformation, became unwieldy,” Nancy continues. “As numbers grew it became an observatory or an illusion of participation,”

William agrees; “The idea of no spectators [the Burning Man strap line] is now almost a parody. It is nothing if not a spectacle. And this plays into Silicon Valley and their fascination with gadgetry and extravagance.”

To some, the presence of the world’s wealthiest tech tycoons represents the commodification of Burning Man. Having luxuries airlifted in and camps set up by paid hands, doesn’t quite fit the narrative of ‘radical self-reliance.’ 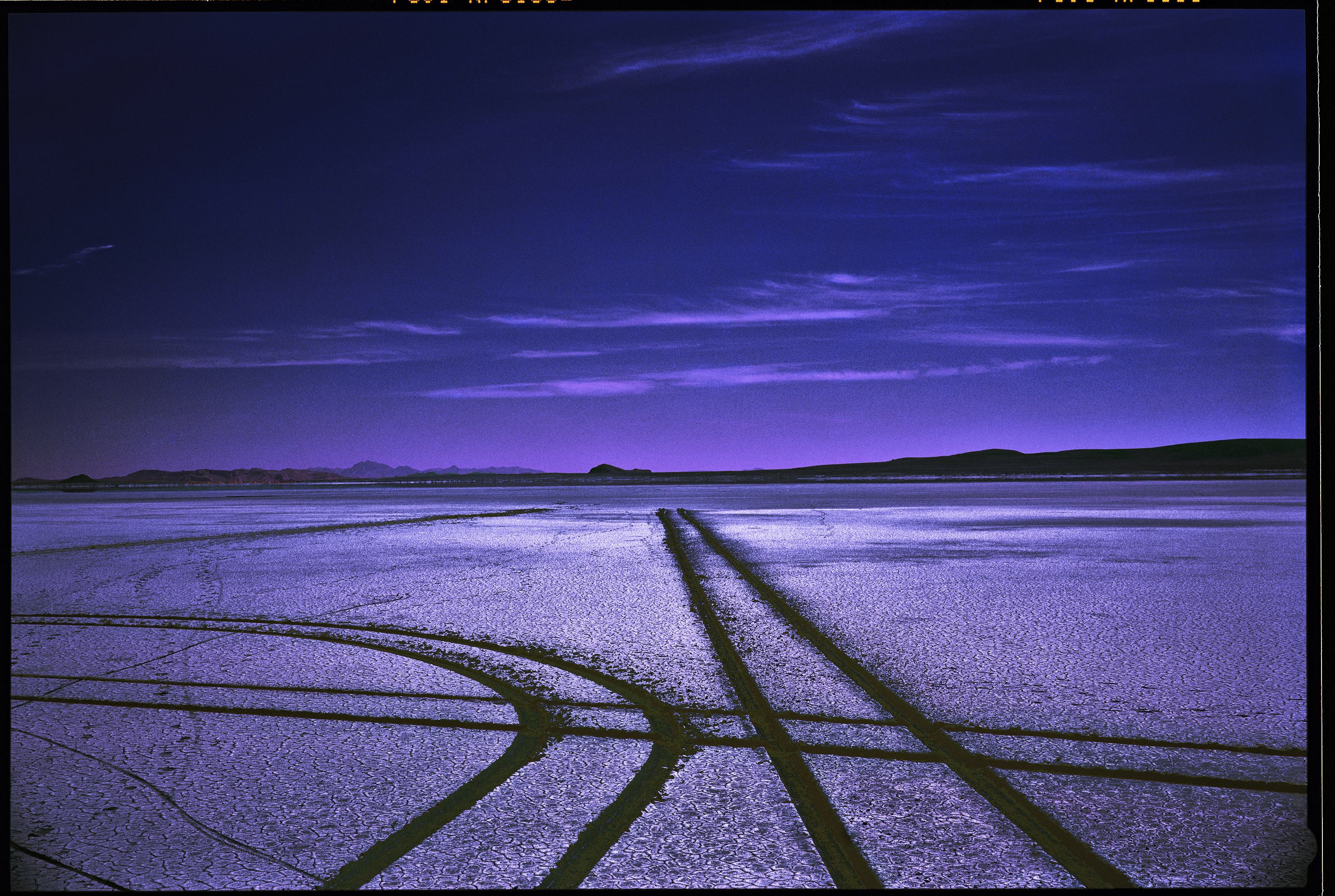 “You have blocks within the city which are like a compound, walled by RVs,” says William. “Inside you’re dressed up to look like an old school burner, you have chefs and security. These places are for the Silicon Valley types and celebs. The elites coming to act like burners, just with baths run for them and five-star food on tap.”

This ever-apparent class divide – perhaps inevitable given the sheer scale of the festival – has sent fractures through the ‘temporary community’. A rising cynicism of the sincerity of the event led burner Paul David Addis to light the Man early at the 2007 burn, in an attempt to reignite the chaos-chasing attitude that has been largely curtailed. He was promptly charged with arson. In an interview with WIRED magazine, he said; “Burning Man was only advocating social impact and responsibility in the name of its own self-preservation, survival and expansion. I was not willing to be a part of that.” 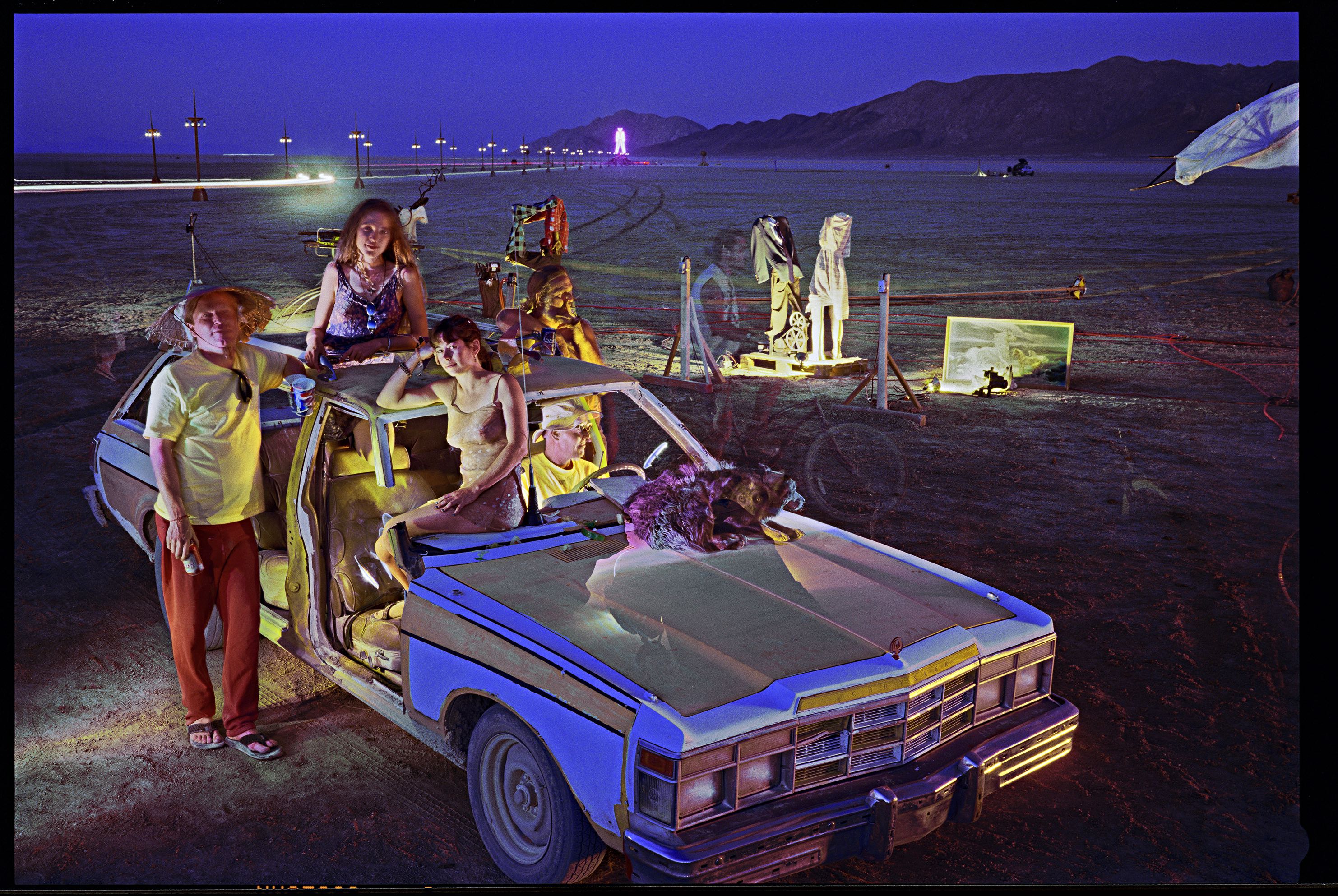 William agrees with Addis. “In the early days, we stood in with other fellows for the purpose of self and participatory transformation. But when you go from a cohesive community to a vast cityscape, the natural human tendency is to want to stand out from the crowd. Now it’s mostly thousands of spectators looking for something to spectate on, or to make a spectacle of themselves.”

For him, Burning Man has gone from a neo-Dadaist realm where anything could go, and frequently did, to what he colourfully calls “a nouveau-riche, celebrity-studded neo-morph of Disneyland for techies and internet-knitters, with more cops per capita than any city.”

“But heck,” he concludes, “it’s still the greatest party on earth, and one of the weirdest, if not THE. Sorry though – you can’t have optimal freedoms if you’re standing amidst a crowd.”

Linkedin
RELATED ARTICLES
OTHER ARTICLES
In the UK, Hongkongers are continuing to stand in solidarity with the pro-democracy movement.
Photographer Yan Morvan revisits a radical moment in history, which saw the emergence of a fiercely-rebellious spirit among the UK‘s youth.
With abuse of call-centre staff on the rise, many are now speaking out about the hostility they’ve faced.
In Sheffield, food delivery drivers are fighting back against one of the giants of the gig economy.
In 1984, Martin Shakeshaft set out to document the miner’s strike as it really happened, using his photography as a tool for activism.
From Brooklyn gang members, to Welsh miners and the residents of East Harlem, Bruce Davidson used his camera to shine a light on the most marginalised.