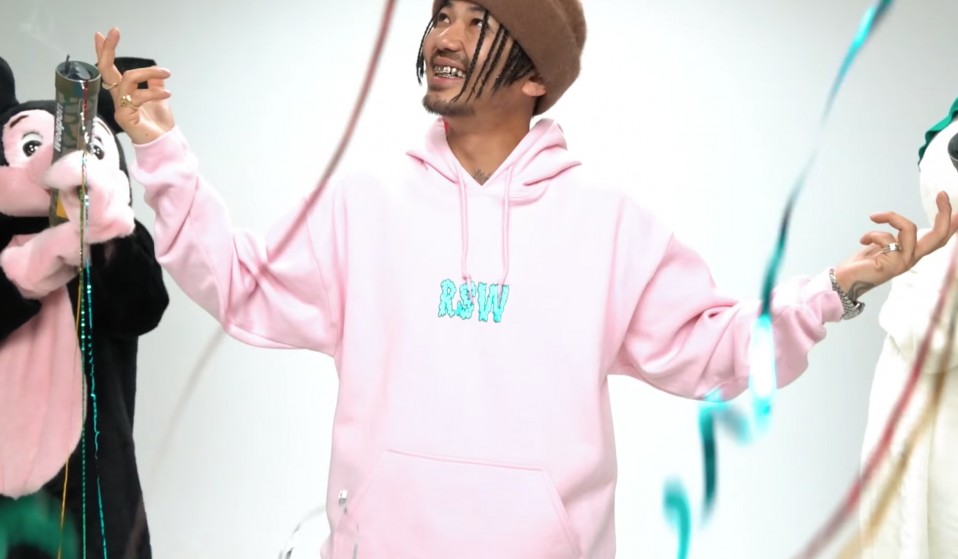 There’s a cliché of Americans moving to an Asian country, reinventing themselves and then coming back home with braggadocious claims about their experiences. But when I met Jack Goldman, 23, during his holiday break in Los Angeles, he didn’t tell any exaggerated tales about being “big in Japan.” Rather, he said something much more interesting; when he’s not working as a teacher in Kobe, he’s immersing himself in an emerging Trap hip-hop subculture.

After graduating from college, Goldman moved to Kobe to work as a teacher in 2016. Over time, after going to clubs and befriending performers, he became well-acquainted with Kitchen House – a trap label founded by rapper Kitchen K, 34,  in 2008. Kitchen K is building a brand from the ground up, and hopes to create a Japanese trap scene that will impact a global audience. In March, he opened up a clothing store named Galaxies in Kobe – an indicator that sometime in the near-future, the scene may be ready to take the leap into international merchandising.

While in the United States and Europe there’s plenty of fans of J-Pop and anime, Japanese Trap has yet to make its way overseas. But with Chinese trap label 88rising’s global success, there seems to be a market for the repackaging of cultural hybrids to Western audiences.

Goldman, as a close friend, occasional collaborator, and “global connector” – according to rapper 23vrsz – is watching the scene expand, from rappers playing to packed clubs at 4 AM to collaborating with artists from South Korea to Jamaica. “What makes this scene different is how interconnected everyone is,” he says, adding that, even though Kobe lacks the same “break out hits” as Trap artists coming from Tokyo, there is a collaborative spirit between the rappers that is fostered in these smaller, more intimate settings. Soon, Goldman affirms, the Trap music coming from the Kansai region of Japan will gain global attention.

Trap music has spread across Asia in various iterations, morphing into the unique landscape of each country. The genre, consisting of spacious beats, hi-hats, and moody synthesisers, is both easily replicable and ripe for reinterpretation. In the last two years, Indonesian rapper Rich Brian — formally known as Rich Chigga — has broken into the Western landscape, racking up a Gold record and getting millions of YouTube views. 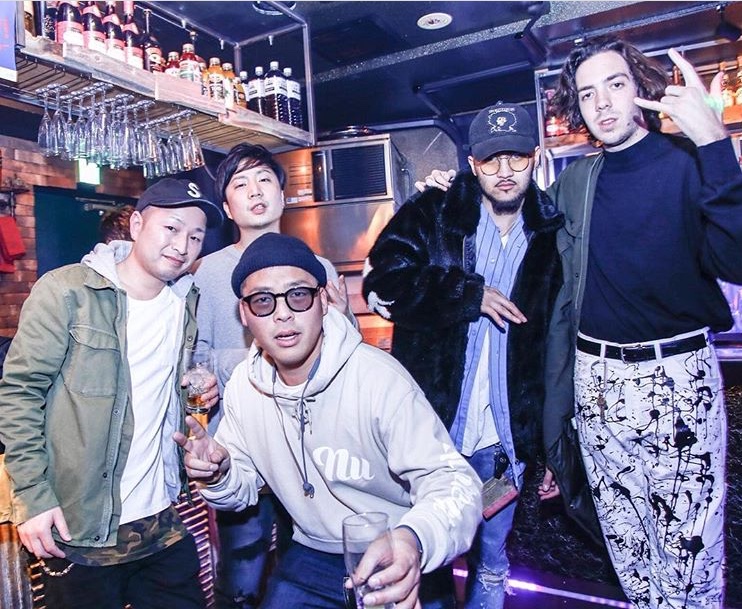 Jack Goldman [right] and MC Sachio [centre] at a nightclub

However, while Rich Brian’s hit “Dat $tick” is packed with English profanity, Kitchen K and his crew – rapping in Japanese – have largely refrained from cursing and rapping about illicit activities.

The Kobe spin on the genre is “fairly safe for work” because cursing in Japan has a “very uncool connotation.” They borrow from the hip-hop themes of getting rich and womanising without getting too explicit – there are no mentions of excessive partying or feuds.

The music video for Kitchen K’s 2017 hit “Ice” captures the fun-loving side of the scene. It’s playful and irreverent, mixing in trippy Kawaii animation, cartoon mascots, and footage of an afternoon filled with dancing, candy, and stacks of cash.

That said, Trap music is still regarded as one of the more subversive genres in Japan. “Since it’s coming out of a completely different environment, it is much more niche and taboo,” explains Goldman.

He also praises the scene for its inclusivity, befriending performers and producers from going to shows and simply expressing his shared interest in fashion and music.

It was Kitchen K who helped Goldman become embedded within the scene. The American describes the rapper as a “super humble guy,” who is something of a local celebrity in Kobe and Osaka, knowing people from “every field whether it be fashion, music, [or] food.”

Kitchen K has the confidence of a self-made mogul. When I video-call him from his heavily graffitied office to find out more about the future of Trap, he shows up late and then nonchalantly lies back on a couch with his posse, leaving Goldman to translate everything but the names of the luxury brands, celebrity designers, and rappers that were the catalyst for the tiny world surrounding him.

During a trip to Orlando, Florida in 2003, Kitchen K saw hip-hop’s full potential when he visited hip-hop nightclubs and admired the energy of the crowds and thunderous dancefloors. Once he returned to Kobe, he was ready to take a stab at rapping. His first efforts have no resemblance to his current releases; he drew from old-school hip-hop acts like The Pharcyde and rapped about dark and moody topics over funky dance beats. As he got more successful, however, he stopped rapping about these “negative” emotions and began to embrace themes of fame and wealth.

Goldman says that Kitchen K’s artistic trajectory is “indicative” of a larger shift in Japanese hip-hop, starting as “skill focused, lyrical, and old school” and then shifting towards something more specific to the region. 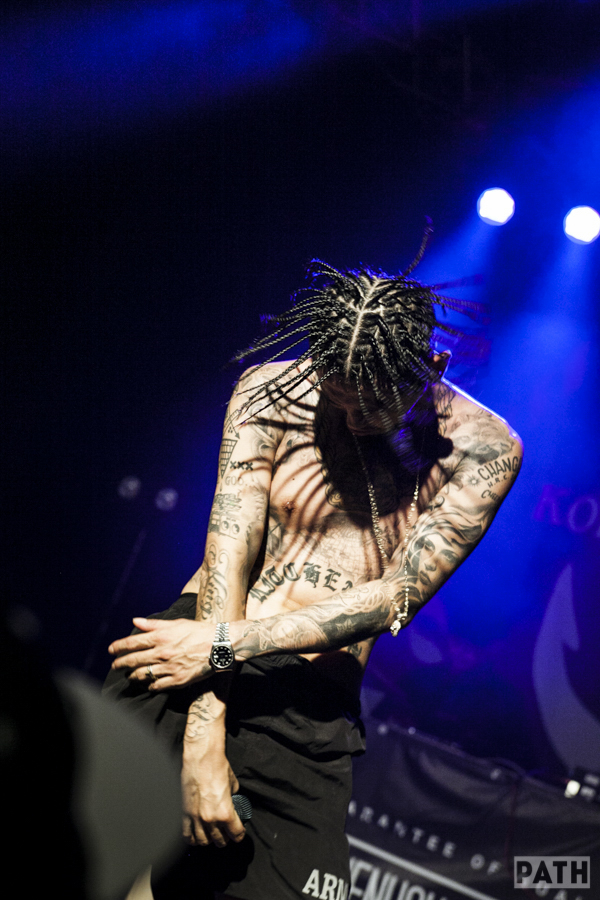 Now, Kitchen K says he’s more drawn to “what’s coming out of Asia.” With ten signed acts under his belt, he is working hard to break out of Japan and build his global brand. He has already succeeded in uniting the Kobe scene and encouraging other Japanese artists to become enthusiastic about Trap.

Goldman has chosen to stay in Kobe to continue exploring his passion for fashion and music. He tells me that he’s drawn to how “the two fastest moving art forms in Japan – music and apparel – are constantly linked despite the constant evolution of both mediums.”

For now, he’s excited to watch the Trap scene expand, and raves about how the Kitchen House shows are bringing crowds of 20-somethings from the neighbouring cities and countryside; coming together to mosh until the early hours of the morning, indulging fully in the fantasy.

Linkedin
RELATED ARTICLES
OTHER ARTICLES
New legislation is set to make it more difficult to hold Israel accountable for its human rights abuses.
Our new magazine is here, starring the inimitable Mitski. Order your copy now and join us on a trip around the world.
The revered showbiz chronicler recalls his journalistic beginnings, documenting subcultural scraps in the ’80s.
In the latest OFFF Dispatch, the enigmatic designer dives into his process, connecting the dots between his unique and varied creative output.
While protests over abortion rights rage in the US, access to abortion services is still almost nonexistent in parts of the UK.
Members of the collective share some of their reasons to run as part of #UnitedBySummits, a campaign that looks to uncover transformative power of the outdoors.