Art & Culture / Music / Jasmin Sehra: ‘Art has always been a part of my life’ 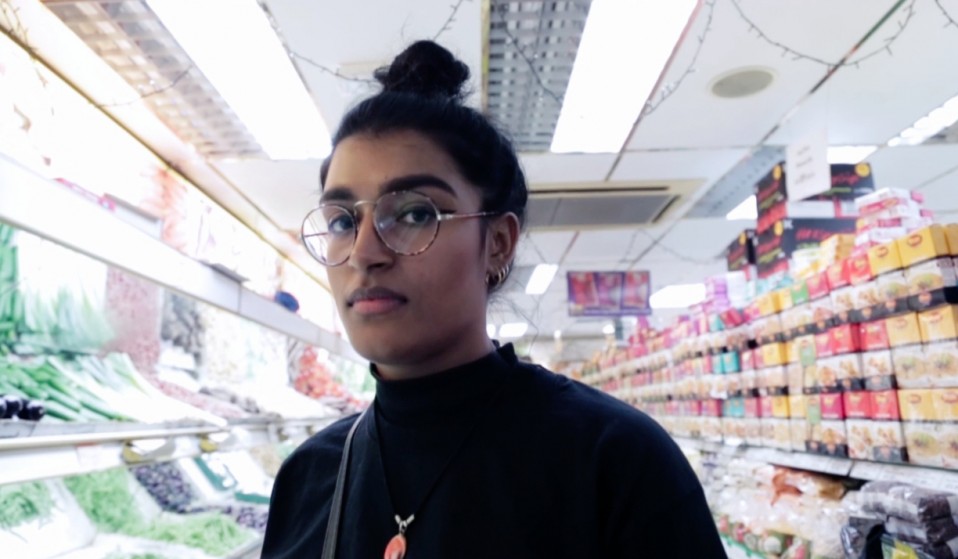 As part of Huck's new film on UK grime culture, trailblazing London artist Jasmin Sehra talks heritage, hardships, and the importance of staying true to yourself.

As part of Huck's new film on UK grime culture, trailblazing London artist Jasmin Sehra talks heritage, hardships, and the importance of staying true to yourself.

Jasmin Sehra is visual artist who captured the attention of artists like Nadia Rose, Lady Leshurr and M.I.A. after she immortalised them in Bollyhood – an art series that combined her musical influences with Bollywood film posters and “cassette tape aesthetics.” Its first outing was a part of Sophia Tassew’s 140 BPM exhibition.

What pushed you towards making art?
My parents always encouraged the arts with me and my siblings– it’s in my blood. My uncles are musicians, my dad is classically trained in Indian classical music, my brother is a music producer, but I’m the one that took the musicality and made it my own through visuals. Art has always been a part of my life, and it’s always been an organic path for me to take.

What pushed you to pursue it as a career?
In university, following a creative path is not the usual thing for an Indian person to do. For me, it felt really normal but you’re one of the very few people of colour. I felt that I was growing distant from my culture and my heritage and there was something missing.

During that time, I went through my parent’s old photos and that was the groundbreaker for me – I saw my parents in Mexico wearing fusion clothing. My mum is there wearing her graphics 90s t-shirts, with her red wedding bangles and I thought, ‘this is dope.’ That made me think, if my mum’s celebrating two cultures that she’s grown up with, that’s something I should do. It made me want to know more about my parents, more about where I’m from and my culture. That’s identity – we have to embrace our culture and roots. That’s what sparked the Bollyhood series. 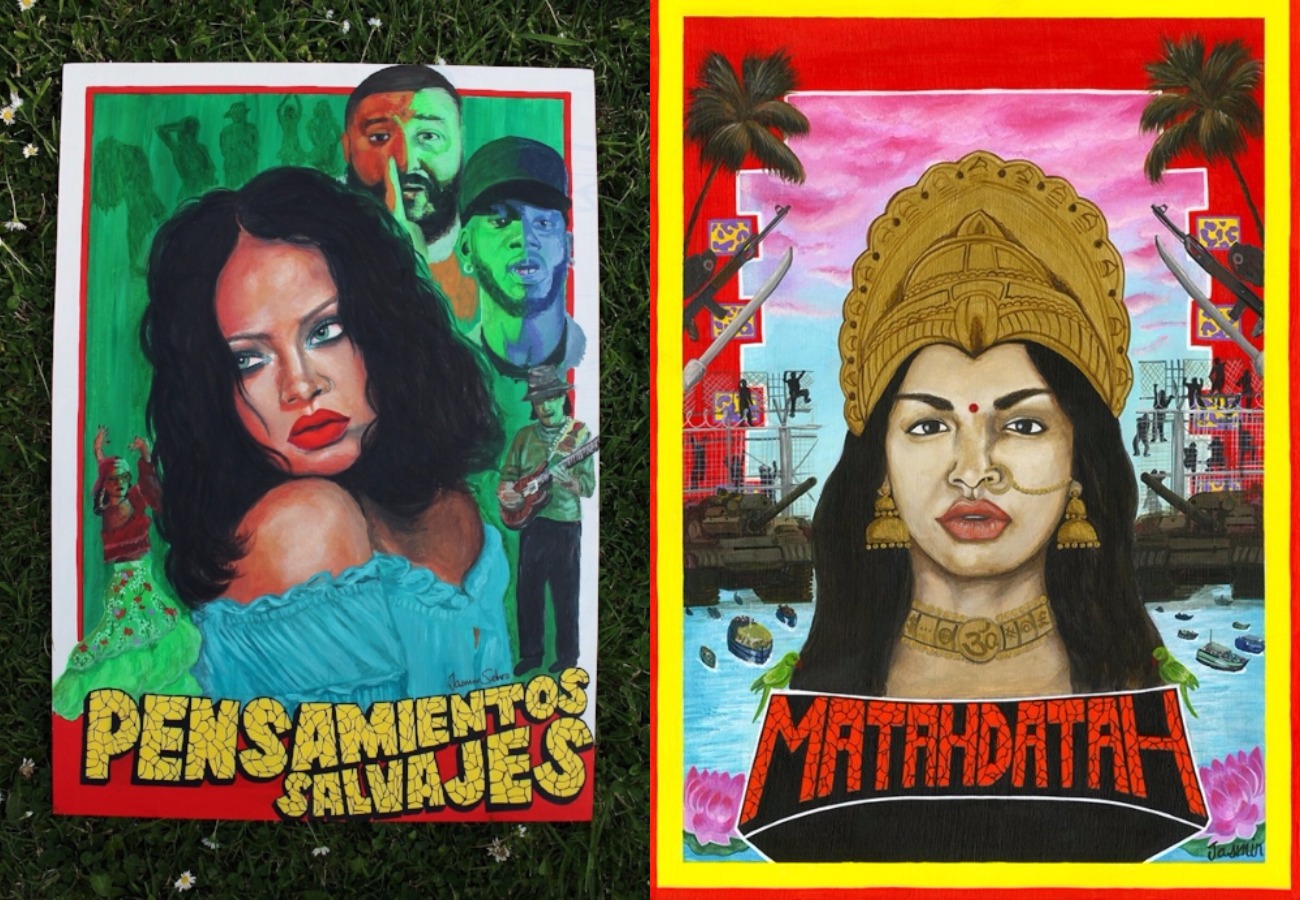 What was the response to your pieces at Sophia Tassew’s 140 BPM exhibition?
It was amazing, quite surreal. It always is. Nowadays, because things are so behind the screen, you don’t really talk to people who connect with your work. To be able to do that and connect with people face to face is awesome.

How has grime affected you as a person, or the stuff that you make?
Grime is definitely not the only influence that I have – but it has taught me to stay true to who I am. 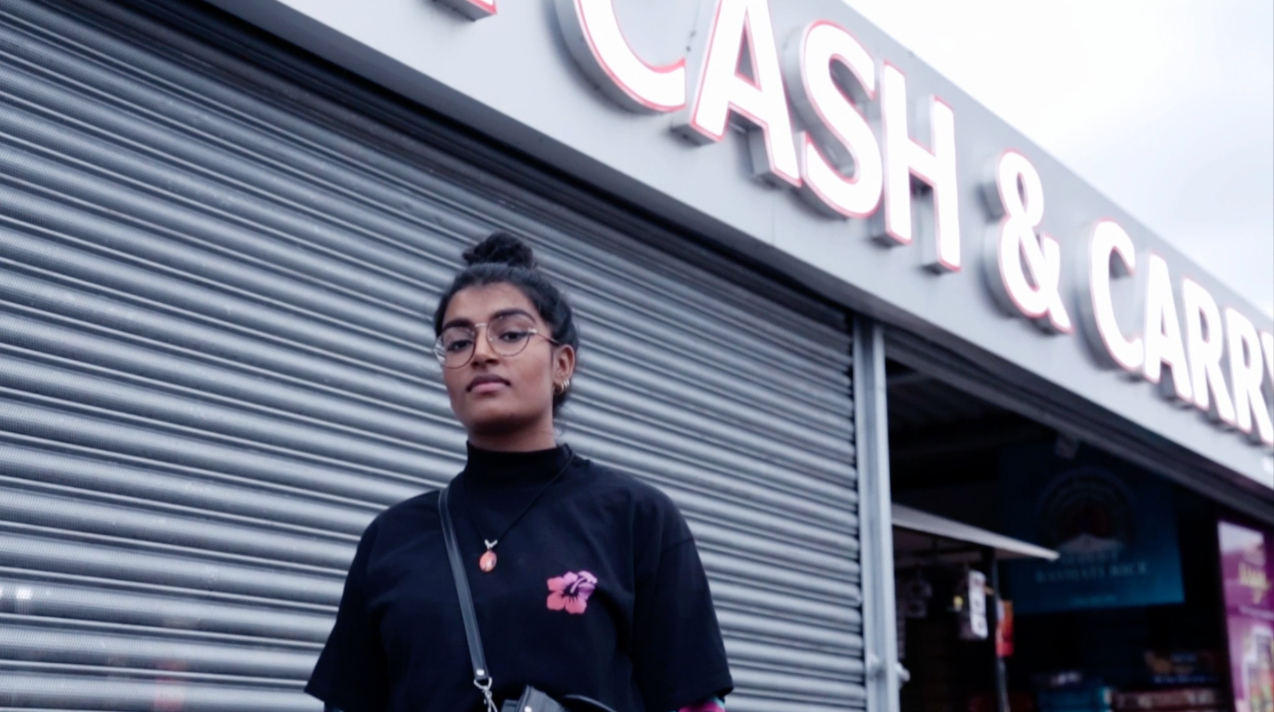 What it is that drives you to keep going?
I just love art so much. Because I’ve grown up with it, it’s a natural thing to do – it’s a part of my everyday life. But what drives me is not only my passion, but the reaction that people give and the support that I receive. It’s all positive stuff and that’s what keeps me going.

What other projects are you working on?
My main project at the moment is my brand, Paradise Girl, which is all about sisterhood and unity. The logo is a Hibiscus plant and a palm tree – they both symbolise beauty, victory and growth. I think it was born from a lot of hardships that I was facing. I went through depression and anxiety, and journaling helped me put those pieces together. Paradise Girl is just that — a celebration of overcoming hardships and creating connections with other people. Especially women, because it’s a female clothing brand. It’s all about portraying positive images through whatever I do.

Linkedin
RELATED ARTICLES
OTHER ARTICLES
Layna, Maysa and Amaya are three siblings looking to disrupt narratives around the sport. In doing so, they’re hoping to inspire a new generation of skateboarders.
A new documentary tells the story of an unassuming cul-de-sac of 13 timber framed houses built by Fusions Jameen – London's first Black housing co-op.
In North Carolina, people are living near to Duke Energy’s Belews Creek Steam Station, where toxins are pumped into the air, water, and soil.
How the sounds of nature, air force bases, walking across the country, Windrush and synthesisers have influenced one woman’s journey through music and life.
A new exhibition is marking the photographer’s 100th birthday with a look back at his extraordinary career.
Photographer Nico Froehlich’s series documents South London’s diverse communities, while also reflecting on their fragility amid rapid gentrification.