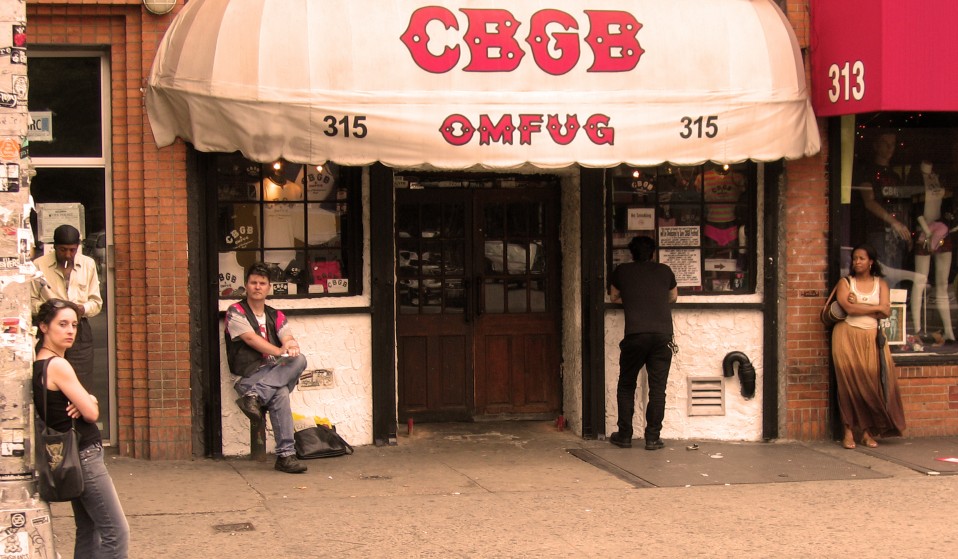 In depressing news that might put you off travelling, off restaurants, and even further off rampant commercialisation of cultural icons, the sorely-missed CBGB is coming back as a themed diner at Newark Airport.

In depressing news that might put you off travelling, off restaurants, and even further off rampant commercialisation of cultural icons, the sorely-missed CBGB is coming back as a themed diner at Newark Airport.

To paraphrase Jane Austen, it is a truth universally acknowledged that any great piece of cult Americana must eventually be accompanied by a side order of fries. News reached the internet on December 21 that the vomit-strewn, rat-infested, punk-rock utopia that was the late and much lamented New York nightclub CBGB will in 2016 be reborn. As a theme restaurant inside of Newark Airport.

Dubbed the ‘CBGB Lounge & Bar’, the restaurant is the product of enterprising Manhattan chef Harold Moore. He was able to pick up the rights to CBGB trademarks in 2012, five years after the death of their previous owner, CBGB founder Hilly Kristal.

It’s still unclear how CBGB, the legendary home to early performances from the likes of Blondie, the Beastie Boys, Talking Heads, Patti Smith, the Cramps, the B-52s and the Ramones, will be linked to the restaurant outside of its branding. But an early glimpse of the menu shows little in the way of ingenuity. Among the food on offer is a $12 club sandwich, a $14 cheeseburger, as well as $9 ‘disco fries’ for the musically inclined.

However, there’s still room to add a modern variant on an original house dish, Hilly’s Chili. Often liberally seasoned with cigarette butts and rat faeces, it might help bring a little authenticity to the new venture.

The all-new, all-greasy CBGB brings to mind other similar cultural dilution. TJ’s, the late, iconic Welsh venue for early gigs by Oasis, Primal Scream and Green Day, was nearly replaced by a music-themed diner in 2011 until plans fell through at the last minute. But with CBGB Lounge & Bar under development for over a year, and menus printed, it doesn’t seem to be resigned to the same early demise.

CBGB 2016. Where the sweat won’t be flying off a heavily inebriated Iggy Pop, but instead the forehead of a pimple-faced teen slinging burgers to bored tourists waiting for their gate to open.

Linkedin
RELATED ARTICLES
OTHER ARTICLES
Steel City is often overlooked when it comes to the country's cultural radar despite its role in shaping electronic music.
Photographer Bud Glick recounts documenting everyday life in the area, and what it taught him about the Chinese immigrant experience.
Students are being left to languish in unsafe housing, in some cases leading to serious health complications.
Last week, Tower Hamlets council removed its nudity-restricting licensing conditions in a huge win for London’s kink community.
We introduce our series spotlighting the voices of people who’ve been impacted by anti-abortion laws and anti-choice protestors.
An abortion storyteller talks about the termination of her pregnancy and the harassment she’s received for sharing her story online.