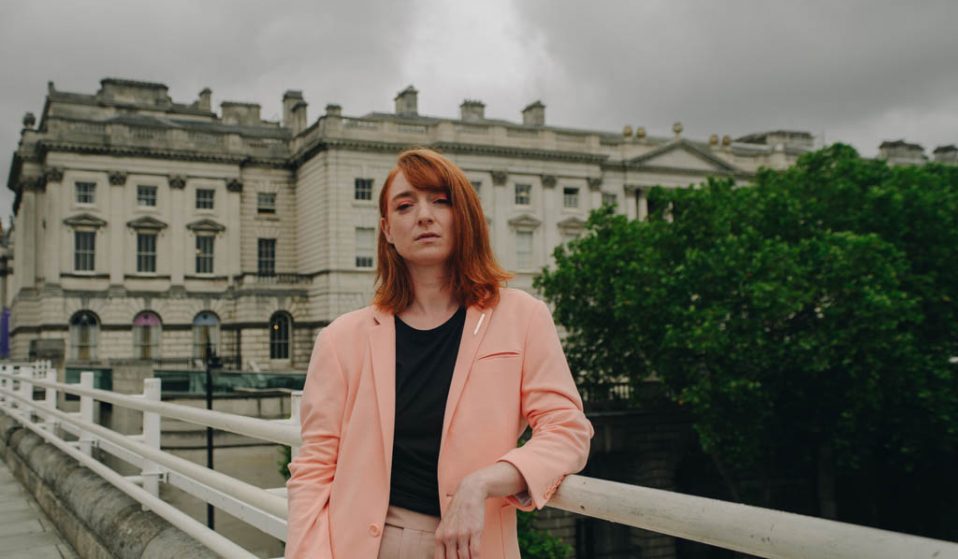 The Manchester-born musician takes us through the Rifle Range – a series of experimental workspaces in the heart of Somerset House.

In this series, we crash someone’s personal space in a bid to find out why it means so much to them. On this occasion, the Manchester-born musician takes us through the Rifle Range – a series of experimental workspaces in the heart of Somerset House’s creative complex.

“It’s my wall,” says Julie Campbell, proudly. “I spent every day in the Rifle Range and I’m strongly imprinted into its walls, I think.”

The dedicated wall Campbell, aka LoneLady, is referring to was built within Somerset House Studios when she moved in to make music in 2016. It was erected to separate her studio from a restaurant adjacent to the aforementioned Rifle Range – an experimental series of vertiginously-arched concrete workspaces at the heart of the grand old edifice.

The musician and songwriter was one of the first artists to inhabit the subterranean studios situated in London WC2, approached by Somerset House Studios’ Director, Marie McPartlin, in 2015. She made the journey down from Manchester, setting up home in Walthamstow and commuting to Somerset House almost every day for 18 months. The initiative was set up to bring artists back into the centre of town, those who might have ordinarily been priced out because of gentrification. It’s a scheme that has proved successful, with current residents including artist Christian Marclay, cinematographer Akinola Davies, musician Anna Meredith and fashion designer Charles Jeffrey. 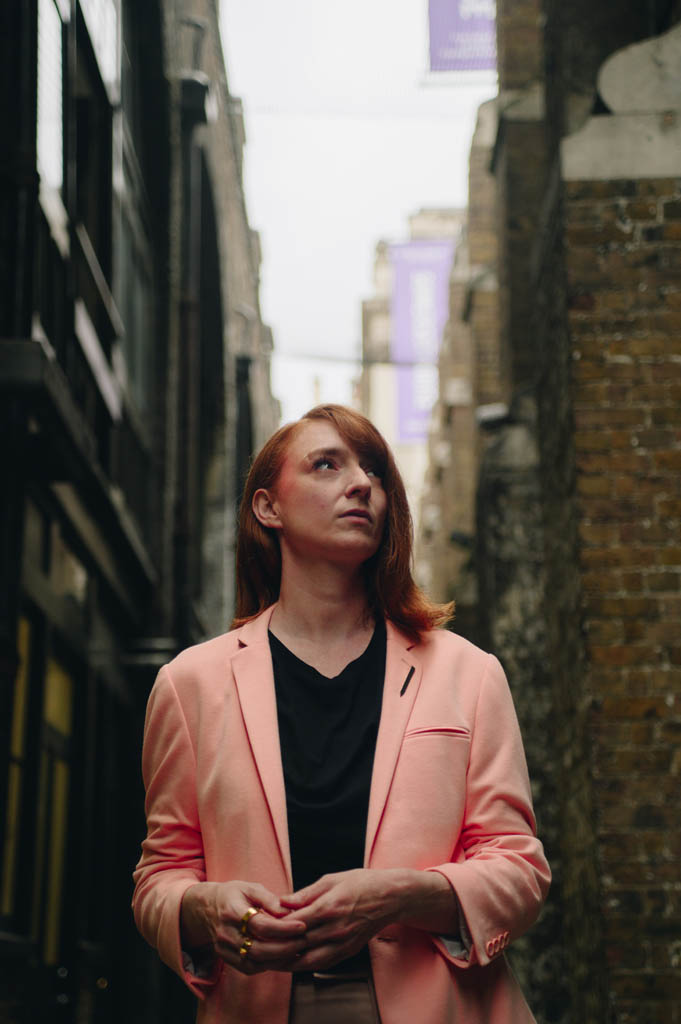 Campbell was only supposed to stay for six months, though she managed to, in her words, “eke out 18 months”. And she remains there in a sense, playing a cameo role in Somerset House’s long and eventful architectural story. The neoclassical complex was once a Tudor palace, a royal hangout and, until 2011, it was home to the Inland Revenue. The original building was erected in the 14th century, though rebuilding commenced in 1775 after the Duke of Somerset’s palace fell into disrepair (the Duke himself was executed at the Tower in 1552). In recent times, it has hosted summer music festivals and provided an ice rink for drunk people to skate around at Christmas. The Rifle Range, within the New Wing, has brought a welcome added dimension, and Julie’s wall remains there for posterity.

“When I moved in, some of the paint was still wet on the walls,” she says wistfully, revisiting the site for the first time since returning to Manchester. “It’s a dilapidated, narrow, concrete room. It’s a very unusual space and it doesn’t really make sense – certainly not as a studio, but that’s where I usually tend to set up camp anyway, in unusual spaces. It’s an awkward room but I like awkward spaces.”

Campbell’s first album Nerve Up was recorded in the hinterland of Manchester’s industrial landscape, in a tatterdemalion former cotton mill surrounded by barbed wire. The abandoned building as a backdrop was partly for inspiration, but mostly out of necessity. Her chamber at Somerset House Studios was an unusual choice too, with admittedly “terrible” acoustics. 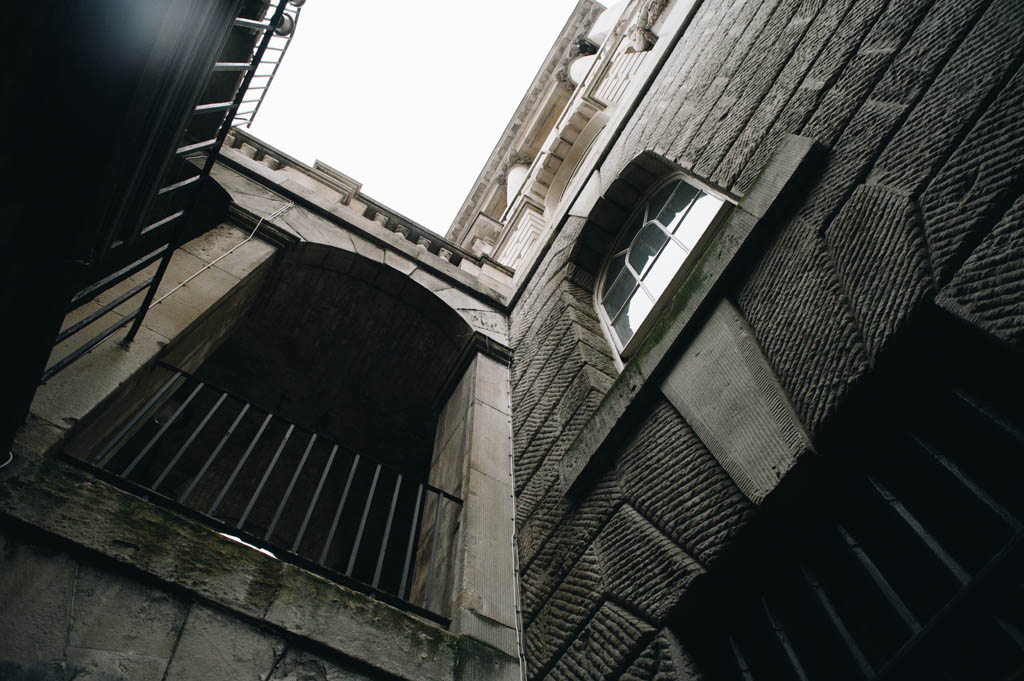 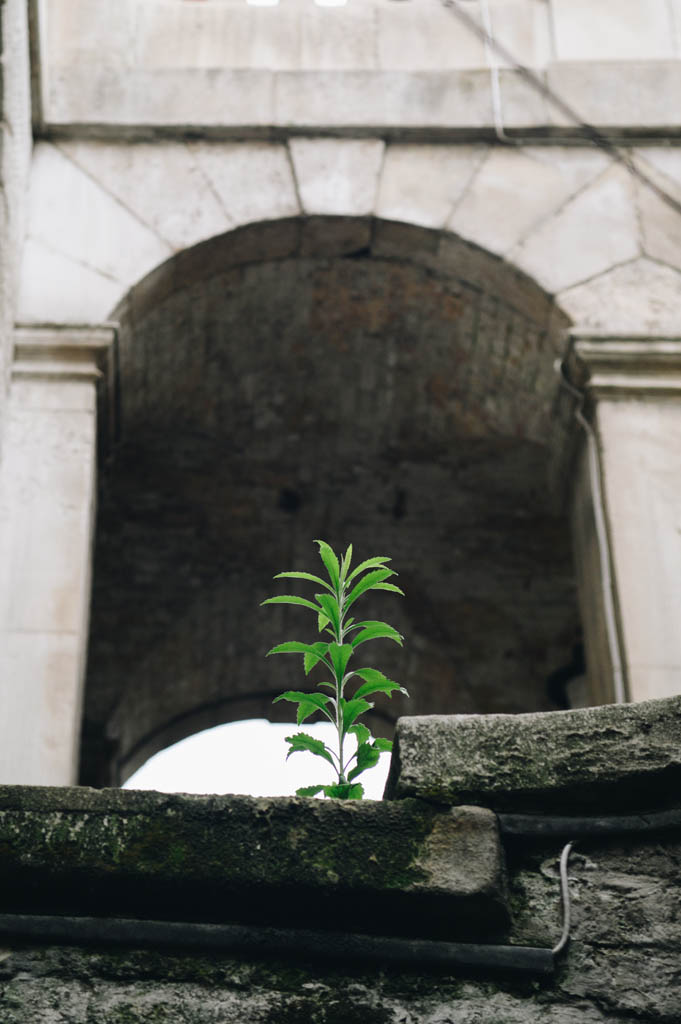 “Initially the Rifle Range was never intended as a rented space,” she explains. “It was only because we were walking through it en route to being shown somewhere else that we paused and said, ‘Hang on, what about this space?’” Long and commodious and shaped like a stained glass window in a gothic cathedral, it has a concrete ramp leading up to it. “It’s a very atmospheric space,” she adds. “It’s a terrible space for a music studio but a lot of the stuff I was recording is DI’ed, so it didn’t really matter. I wasn’t trying to capture the ambience of the room, I just needed somewhere to work.”

To counteract the bareness, Campbell brought three projectors into the room. She would project Ingmar Bergman films onto the exposed plaster – The Hour of the Wolf is a personal favourite of hers (“It looked amazing and animated the space,” she says). I ask her what pictures she put on the walls at the Rifle Range: “It’s a listed building,” she reminds me. “You’re not even so much as allowed to put a tack or a drawing pin into the wall.”

As well as her projectors, the room included an analogue sequencer, and several synths that you may recognise on new album Former Things: an ARP and a KORG MS10, and a digital KORG she was gifted by Brian Eno (she used it on ‘Time Time Time’). Eno, a trustee, can apparently often be found wandering the halls of Somerset House Studios without his pass, hoping to be zapped into the next corridor by kindly staff. Eno has popped his head around, and Campbell had several parties where she fretted about drinks being spilt on her hard drive, though her space was generally out of bounds when she was working. 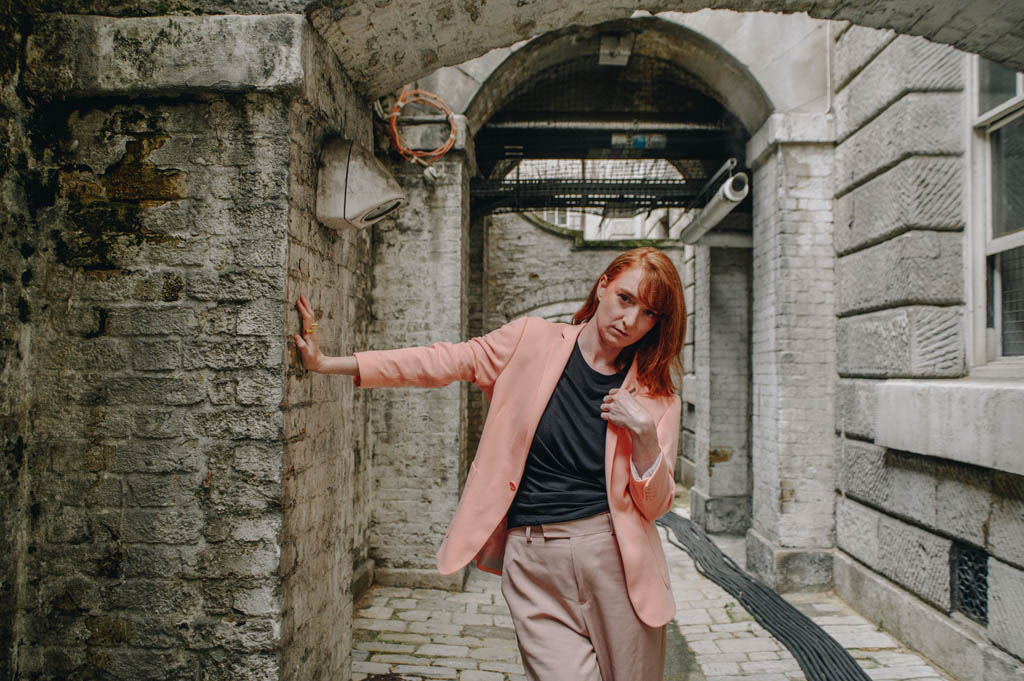 “I painted the exterior wall grey and put yellow and black hazard tape around it, and there was a little glass window into my studio which I covered up, crossed out with hazard tape,” she says. “So it was very much a bunker saying keep out, which was in direct contrast to the White Box room which PJ Harvey was in which invited people to look in.” (Harvey, you might remember, made the Hope Six Demolition Project before a paying audience in 2015, partly to demystify and expose the rigour and ennui involved in the recording process).

Aside from the self-isolation for creativity’s sake, Campbell embraced living in London and joined in with the community aspect of Somerset House Studios. “Even though I was in a dilapidated space, the rest of the experience was very grand. There would often be parties and free champagne, and I embraced that.”

Being outside of her home city of Manchester also allowed her to interrogate her past from a distance, away from the living diary of her natural surroundings. “It’s not a London record,” she says, “but the physical manoeuvring myself out of my city and those memories helped create something fresh, or helped me access my creativity a bit more directly.” 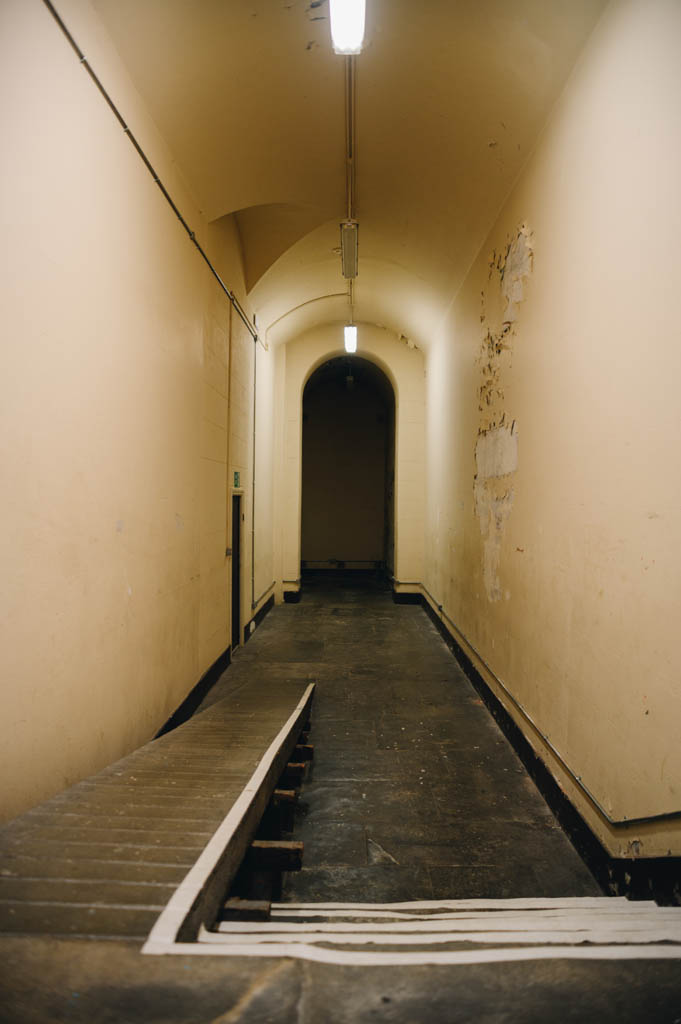 Place has always been important to Campbell, and when I mention the much-abused “psychogeography” word, she doesn’t recoil. “I didn’t even know that term until a few years ago, and I realised that that was the term to describe what I’ve been doing more or less my whole artistic life. A strong reaction to place, daydreaming about place; I do think it’s a lot to do with my art school background.”

In 2020, LoneLady got the urge to do the third installation in an occasional series she calls Scrub Transmissions, where she takes a piece of music and buries it into a wall. “It’s quite Ballardian,” she says, “and I suppose it grew out of just being surrounded by concrete, because I was living in a tower block next to a motorway. I had an MP3 device with one of my songs looping on it and literally mortared it into a crevice under a motorway with a socket exposed, and then made a little map and just put it out there.” The last installation was called “DEMON”, named after the word graffitied on the underpass that inspired it.

I wonder if she thought about mortaring a surreptitious MP3 player into the wall at Somerset House? “I would be sued!” she says, laughing. “It’d be good to sneak one in somewhere, it’s such a vast building.” 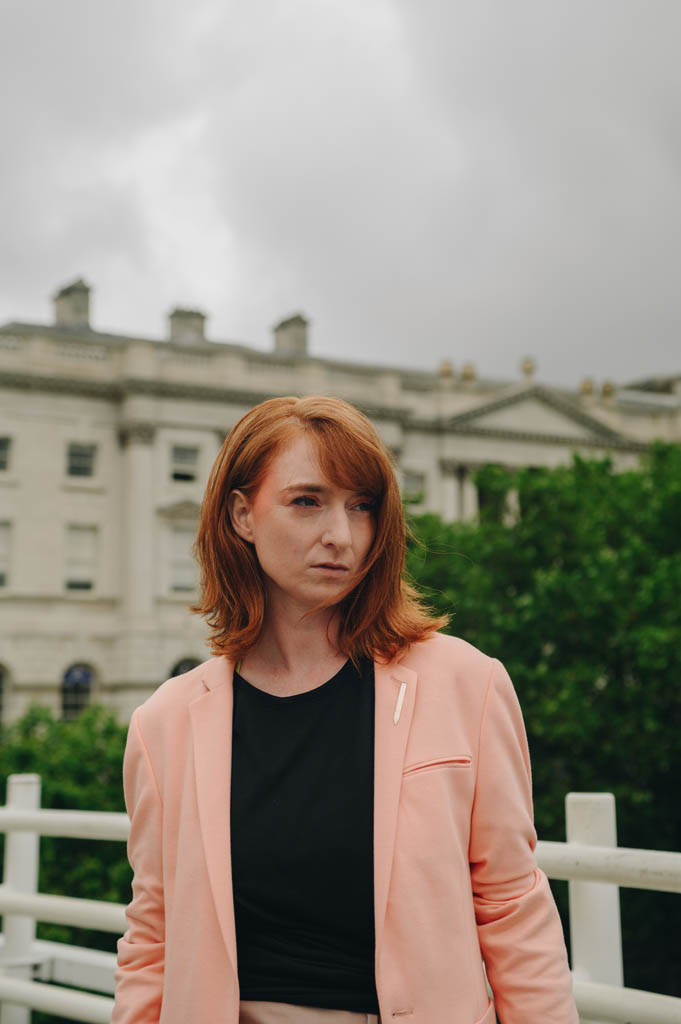 Former Things is now available on most major streaming platforms.

Explore the rest of the Where The Magic Happens series here.

Styling and makeup by Paul Harfleet.

Linkedin
RELATED ARTICLES
OTHER ARTICLES
Photographer David Corio’s archive offers a glimpse inside a revolutionary era of music and nightlife.
For over a decade, gamblers have won big by employing people to place live bets from the court. But does this dubious method still work?
A group of young Palestinians have found temporary freedom in the act of parkour, reimagining wreckage and ruins as a series of high-octane playgrounds.
Ahead of the release of their first collaborative album, the producer and rapper talk psychedelics and the state of UK hip hop.
Sean Maung’s photos are a love letter to the Black and brown communities that make up New York.
In his 2008 series, the photographer pictured himself as Angela Davis, Martin Luther King Jr., Malcolm X, and other prominent figures.