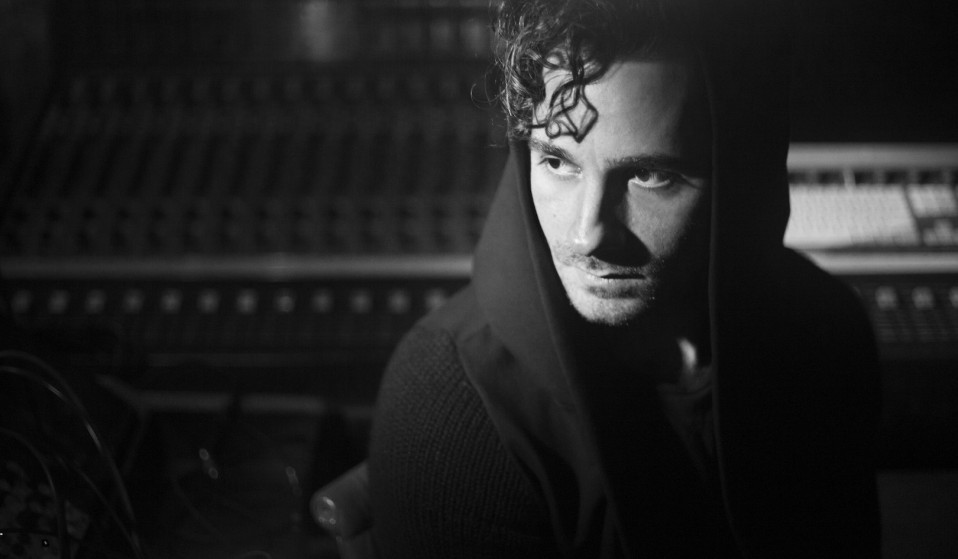 Following the death of his creative partner in 2009, Joshua Eustis let IDM pioneers Telefon Tel Aviv drift into hiatus. Now, having decided to resurrect the project in the name of catharsis, Eustis is ready to reappraise the journey so far. He talks to Steven T. Hanley about influencing Drake, measuring up to Autechre and basking in the golden era of electronica.

When Charlie Cooper died in 2009, the future of electronic duo Telefon Tel Aviv looked uncertain. Joshua Eustis, its other half, relocated from New Orleans to Los Angeles and worked as a member of Nine Inch Nails and Maynard James Keenan’s Puscifer as well as branching into solo act Sons of Magdalene.

This month marks the first real live performances of Telefon Tel Aviv since the project lapsed into hiatus over six years ago. Not only are the old releases being re-issued on Ghostly, but Eustis has a string of new material in development too: a collaborative project with Turk Dietrich called Second Woman, his other project Tropic of Cancer as well as the creative rebirth of Telefon Tel Aviv.

“All the old stuff that hasn’t been released will get bundled with re-releases,” he says. “I’m also working on a new Telefon record right now, the first stuff that I have really gathered since Charlie died that I feel makes sense. I am hoping to get that record out in 2016.” 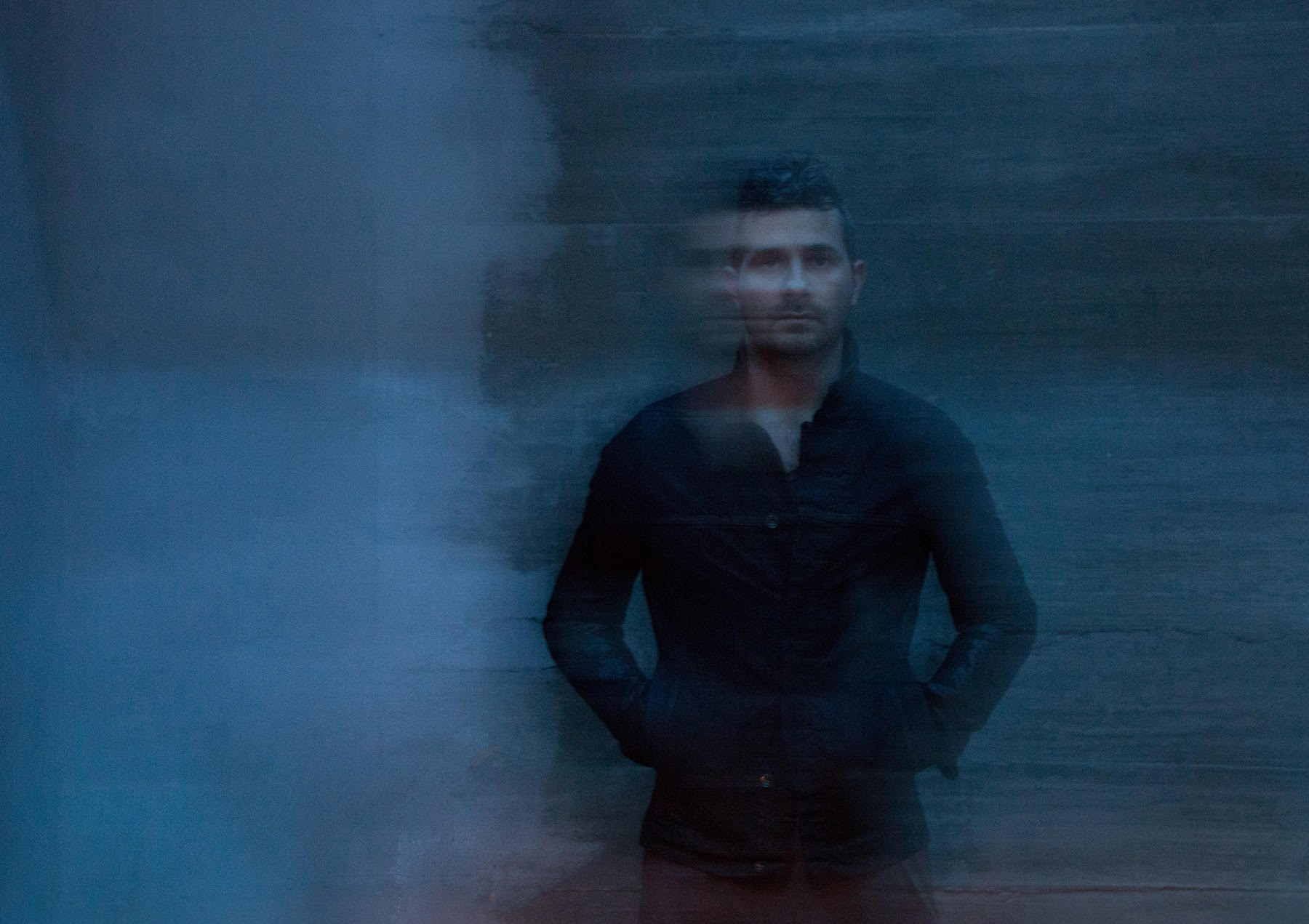 Can you remember what first sparked your interest in electronic music?
It was actually a very specific moment: I was seven-and-a-half years old and I saw the video for ‘Rockit’ by Herbie Hancock. It was this really incredible dystopian view of the future: these robot legs walking back and forth and this completely mechanised form of music. I became obsessed with futurism and associated electronic music with that. And I knew I would do it for the rest of my life. There was no question about it. I got some little toy keyboard for my eighth birthday and I never left the fucking thing alone.

Were you instantly a good player or did you have to work for it?
No, I’m still not great. I’m a student of a form. Electronic music is the kind of thing where you can name on one hand the people who have really brought it forward: the people who are untouchable and just ahead of everybody in electronic music… Autechre, Aphex Twin, Oval, Pole… and I would put everything associated with Moritz Von Oswald in there too. I feel like his obsession with dub music was really what brought dub to electronic music and out of Kingston to the rest of the world.

How did Telefon Tel Aviv form?
I met Charlie in 1992. We went to separate high schools but we had a lot of mutual friends and he was a big shot in the New Orleans music scene. He had a band there that was really popular. I was in maybe the only real, purely electronic band at the time. Fast forward to 1999: I ran into him in this department store and just started talking about music and said, ‘Hang on, man. We have been friends for this long and we like the same shit. Let’s do some stuff together.’ The next weekend, he brought over a session that ended up being the first Telefon Tel Aviv song [‘Introductory Nomenclature’] and the second last on the first record.

Can you remember how your style developed? Was there a discussion or was it organic?
It’s interesting that you bring that up because we originally started two projects at the same time. The first project was purely electronic instrumental stuff and then the other project was kind of post rocky stuff. Eventually we wanted to combine elements of both into one project. 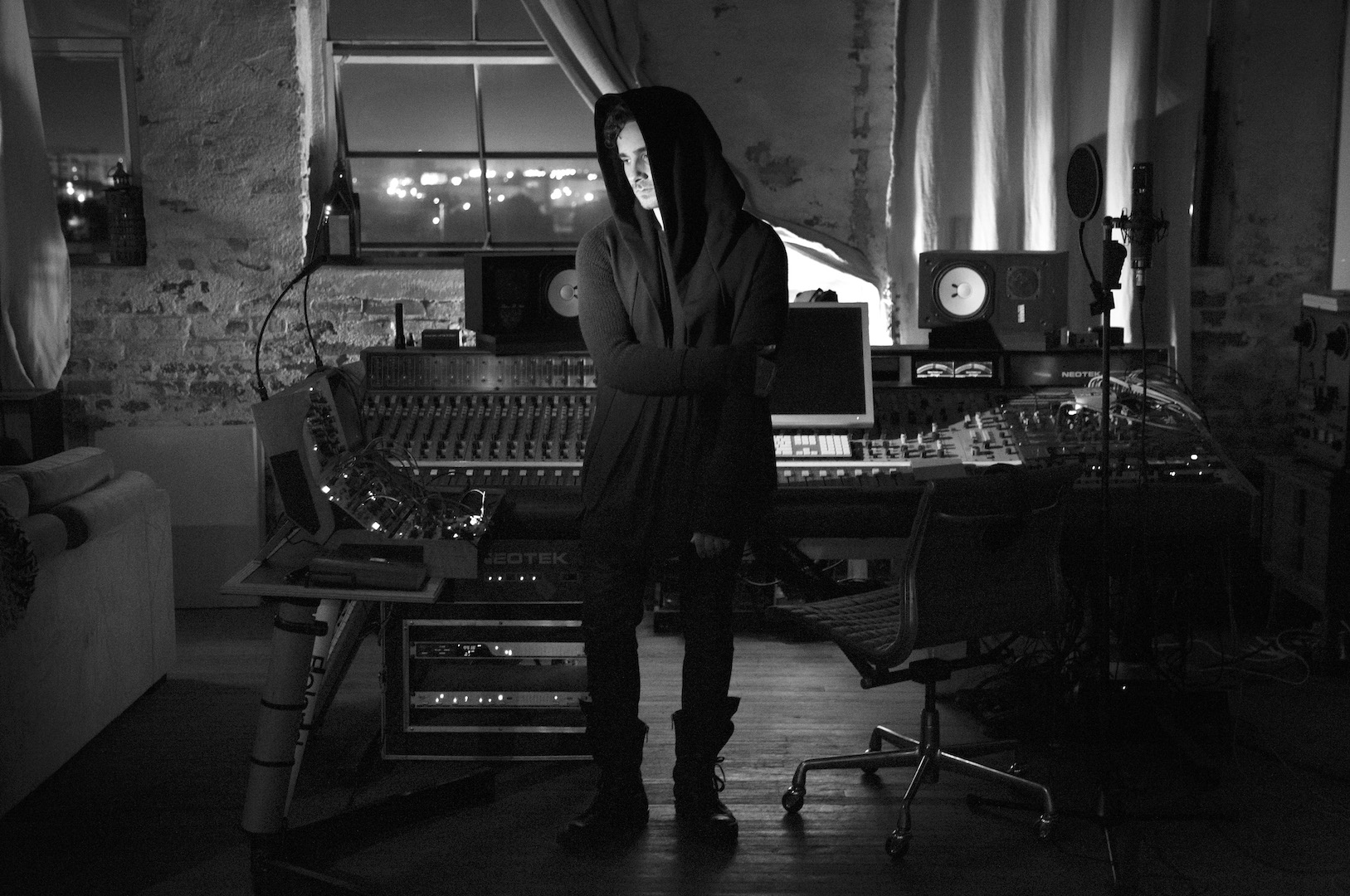 Listening back to your production – especially on the first record – every beat, glitch and synth part sounds so meticulous.
That’s just a symptom of a process that we went through to make songs. We would do sound design for two days before we even started working on a song. We would sit around and make sounds again and again; thousands of them. Then one of us would present a mechanical idea and we would start adding sound design into the session with a melodic idea and it kind of happened that way. Every single sound was made by hand and placed specifically in this stereo spectrum with volume, panning and the effects. We didn’t know any other way to do it, so it took a year.

That’s so funny. So what sounds like such a sophisticated end result was developed purely out of naivety?
Absolutely. It was totally naive. We wanted to achieve this sound and we couldn’t think of any way to do it except saying, ‘Fuck… we have got to do it by hand. It’s the only way we know how.’ We would loop one bar and work on it for hours; days, sometimes.

How long would, say, the first track on Fahrenheit Fair Enough take?
That song took two months of 12 hours a day. The front section of it where it’s really hectic took five weeks. It’s a minute and half of music and took a huge amount of time.

On the second record, where did the idea come about to incorporate R&B vocalists?
We wanted to expand the pallet and get more into the song side of things but we didn’t really know how. We just figured we should get collaborators to come in and do that side of it, then we’d manipulate it and make it fit. In retrospect, we didn’t really achieve what we were trying to make but that is no one’s fault but ours. We wanted to make this really kind of dark, seedy, kind of sleazy, sketchy, RnB thing and then it ended up sounding really polished and soft and kind of mellow.

I’ve always thought some of that record really sounds like what Drake, The Weeknd and Frank Ocean are doing now. Specifically the chilled minimal production, melancholic soul vocalists songs. Have people commented on this before?
Yeah, they have and that’s great.

And that’s not an insult. I really love Drake.
No, I do too. A lot of his stuff is great. We were and still are obsessed with futurism and trying to bring soul into American musical forms. I don’t know… I think I would be really presumptuous if I was to say any of these modern guys were influenced by what we did because there is no way they know about it… at least, I can’t imagine. It would be really awesome if I found out that they were influenced by it… but we are such a niche project, it seems highly unlikely to me.

On the third record, you’ve really got a dark eighties electro sound going on. Almost like OMD on steroids.
[Laughs] Yeah, we were listening to a lot of OMD at that time. Everybody kept saying, ‘Oh, it sounds like Depeche Mode.’ We were listening to a lot of minimal wave and stuff like that. A lot of krautrock and psychedelic stuff – all of these things that we loved but we still wanted to have some element of futurism and romanticism and that’s kind of what came out.

When we made it, we were like, ‘Oh god, this is the third record that sounds like a different band. What the fuck are we doing?’ It was really confusing to us but maybe this is a symptom of so much time passing between records. It took us so long to make a record that I feel like we got older and our tastes changed.

Listening back recently I thought, ‘Man, what an amazing era for electronic music.’ For someone who was part of it at the time, do you feel like the same way?
I look back on it so fondly. It’s funny, as I was having a talk with Sean Booth from Autechre about this very thing a couple of weeks ago and he said the same thing: ‘Man, that was a hell of a time, wasn’t it? 1999 to 2004… It fucking went off!’

And I was like, ‘Yeah… and then you guys made Confield and everybody felt stupid.’[Laughs] It really was a golden era in a lot of ways. I think because the technology bloomed so fast right around that time.

They’re the one artist that still blow my mind. Stuff like ‘Flutter’ from Anti EP and ‘Eutow’ from Tri Repeate are just incredible
‘Eutow’ is the best electro track I have ever heard and people don’t hear it as electro – but it’s 100% electro. It’s just Autechre’s version. Those guys are B-boys and people forget that about them. Everything they are doing is rooted in hip-hop and B-boyism. If you listen to their music with that lens, it just opens up a whole new interpretation of it and I love that. I love listening to it knowing that those guys were like probably riding BMXs and tagging buildings in the ’80s. It makes a lot of sense to me.

How did your involvement with Tropic of Cancer come about?
I just became friends with Camella [Lobo] and she eventually asked me to come aboard and help her with the records. She had been doing it already for five years maybe when she asked me. She just wanted another person to handle the more technical aspects of it and expand the pallet and tidy up production. I like that kind of stuff. I was a super fan of Tropic of Cancer before I knew Camella and before I joined the band so being in the band is pretty amazing for me because I love her records. I’m hoping to get the new Tropic record out in 2016 also.

How do you feel about the current state of electronic music?
Honestly I feel it’s coming back. I feel like there is a tremendous amount of good music being made right now I mean Houndstooth label is amazing; the Berlin based Pan record label is amazing; Editions Mego; Raster-Noton is still incredible, Modern Love Records – they can do no wrong; Blackest Ever Black… there are so many great electronic record labels and so many new artists, young artists, older guys who are newer artists…

I mean there’s so much good music being made right now I feel like we are about to enter another golden era for electronic music.

I hope for this. I feel like we hit a big peak in 2001 and it kind of dwindled but I feel like it’s getting back into a time period and environment which experimentation, pushing the envelope, forward thinking – all of these things are becoming core values again.

At least, for me it feels like it is, so I hope that we see more of that in the years to come. I hope to see another golden era. 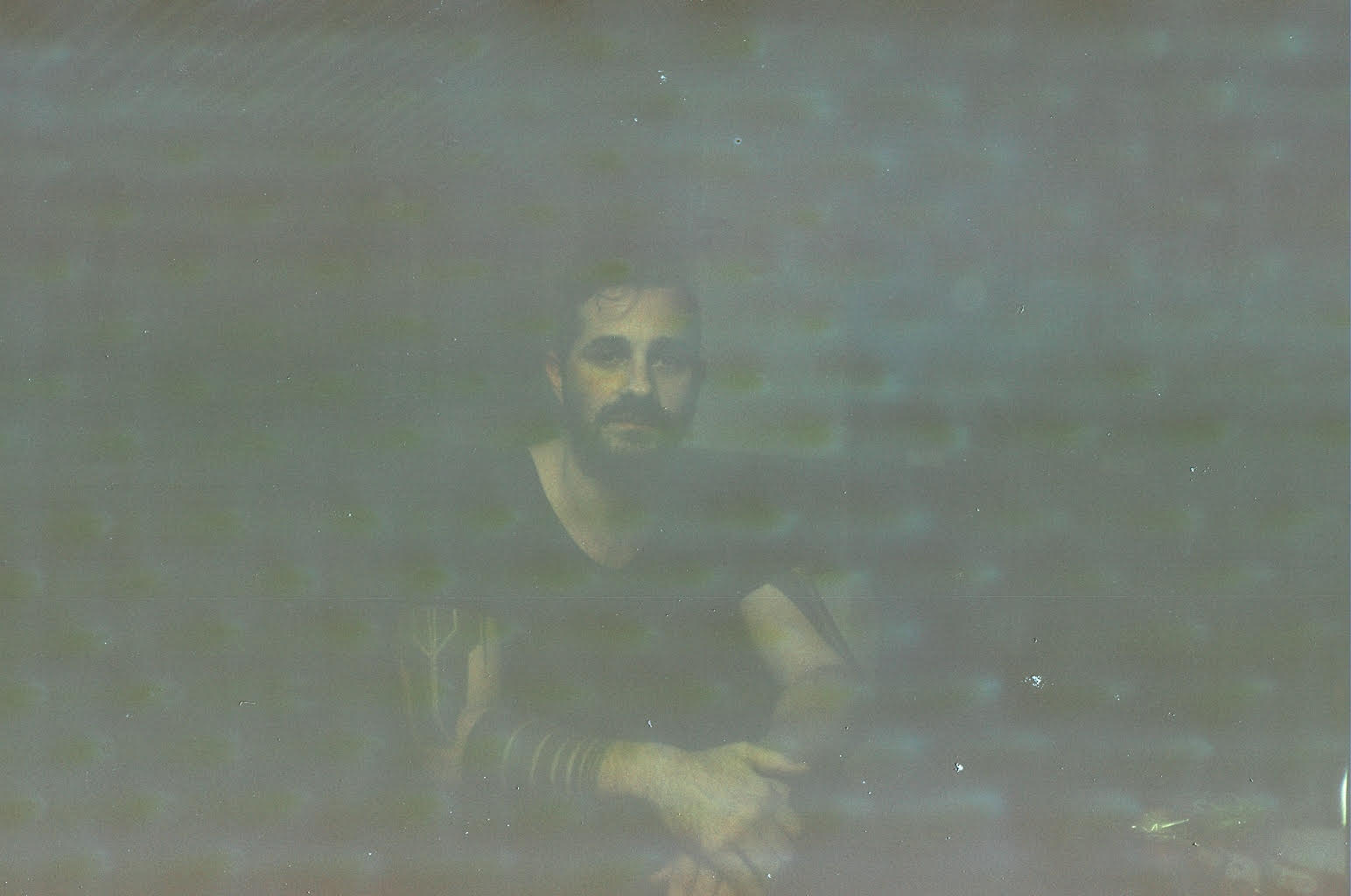 Linkedin
RELATED ARTICLES
OTHER ARTICLES
Photojournalist Fiora Garenzi spoke with people still living in Eastern Ukraine, an area which seen some of the heaviest fighting since the war began.
From the chip shops, to the bingo parlors and burlesque dancers, photographer Mike Coles remembers capturing scenes of holidaymakers by the English coast.
Steel City is often overlooked when it comes to the country's cultural radar despite its role in shaping electronic music.
Following the release of his latest album, the rapper talks about finding a new approach to songwriting, attitudes to poverty, and why his music is more than a political statement.
A series of photos by the late Jerry Dantzic taken in 1957 show a tender side to the iconic Jazz musician.
A new series of photos by Johny Pitts shines a light on communities and subcultures that have all too often been overlooked.