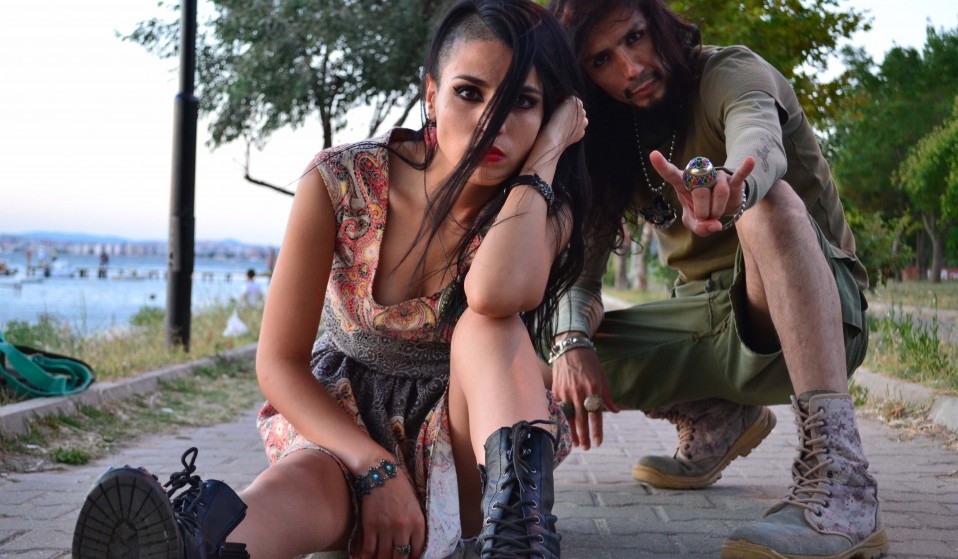 In northeastern Iran, heavy metal band Master of Persia are flogged, imprisoned and exiled for writing songs that give a voice to those otherwise unheard.

Journalist and life-long heavy metal fan Orlando Crowcroft spent six years penetrating the rock and metal scenes in the Middle East, finding a new generation of rockers, rappers and metalheads who are flogged, imprisoned and exiled for writing songs that give a voice to those otherwise unheard. This is an extract from his book, Rock in a Hard Place.

Meraj Ansari gripped the chain-link fence in the basement of the city jail in InMashhad, northeastern Iran, and waited for his lashes to begin. Behind him was the judge, who hours earlier had sentenced him to be flogged 100 times for Satanism, standing next to a prison officer, a religious cleric and a gaggle of soldiers.

Meraj, a former champion in jiu jitsu and karate, knew he could handle the beating. He had made his mind up that those gathered would not hear him scream. “I was silent. I was relaxed. I was strong in front of those bastards,” he said. The prison officers wanted to handcuff him to the fence, so that when the flogging began he would not fall to the ground, but he refused. He insisted he could handle it. “I never screamed. I stayed strong.” Meraj remembers that the first prison officer flogged him exactly 67 times, before handing over to his colleague, who gave him the other 33.

When his sentence was up, Meraj lowered his arms, but the judge insisted that many of the strokes of the whip had not been hard enough – and that he should have 30 more. As he was beaten, the soldiers laughed and mocked him. On the other side of the fence was another prisoner, slumped on the concrete, forced to watch the ordeal as a form of psychological torture.

When it finally finished, Meraj lowered his hands, put on his shirt, and looked at each of the men in turn. “They wanted to break me. All of them were shocked. I just looked at them, and I left,” he said. Outside the jail, his mother was waiting in the car and, seeing Meraj walking calmly out of the prison, assumed that he had managed to avoid the flogging, perhaps by paying off one of the guards. She insisted that he drove himself home. When he got back to the house and took off his shirt, his back and legs were bloody and raw. That’s when his mother began to scream. 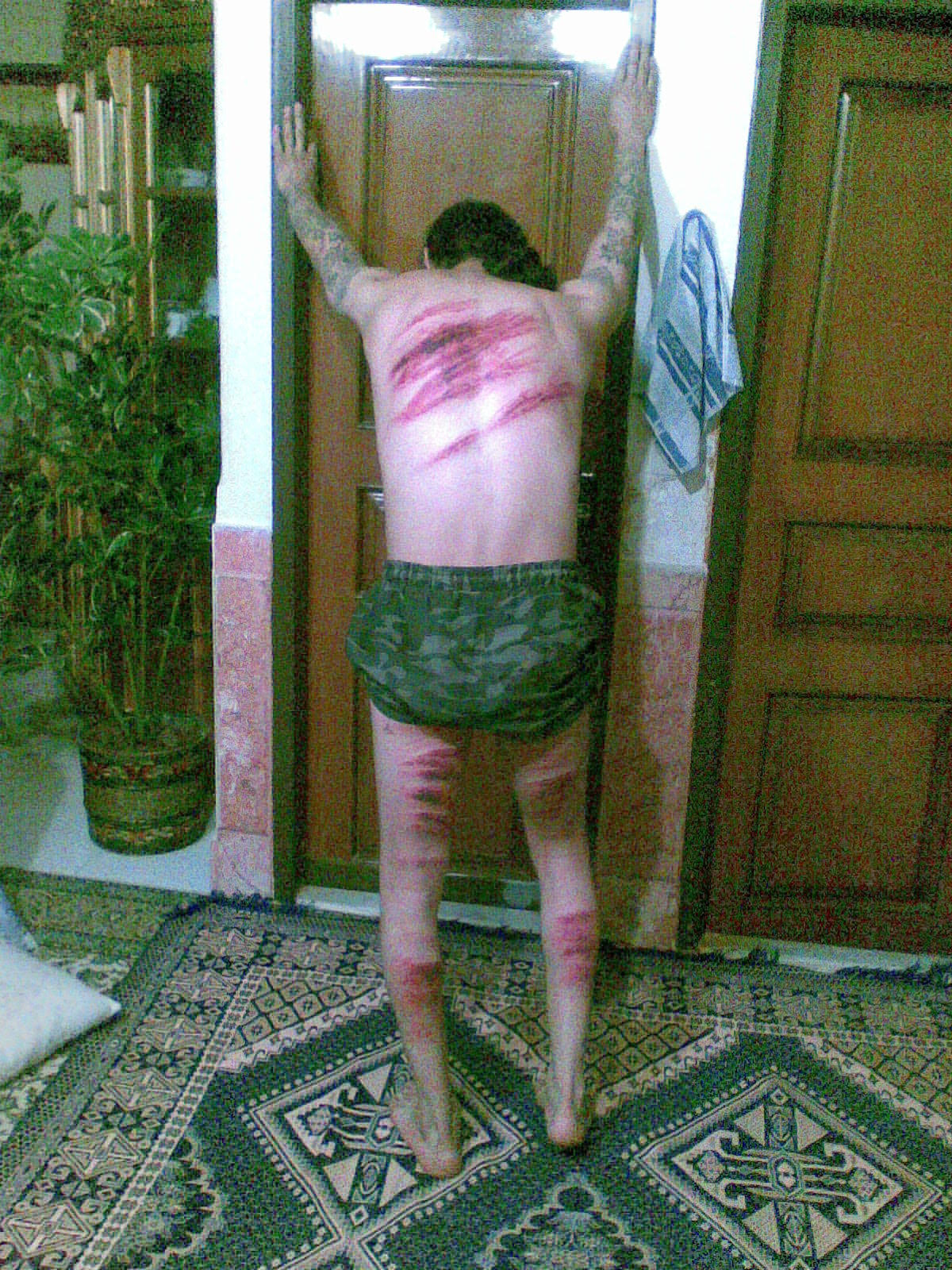 It had been six months since Meraj’s martial arts club and studio was raided in downtown Mashhad. He had used the studio as a recording space for Master of Persia, the heavy metal band fronted by his friend Anahid. Meraj was charged with Satanism and originally sentenced to 180 lashes and a fine of $4,000 before he had it released to 100 and $300 on appeal. In the six months between that sentence and his flogging in Mashhad, he had spent some time in the local jail until a relative of one of his students stumped up the cash for his bail.

For nine months after the beating, Meraj laid low, but one day a representative of the city’s religious authorities called his father and demanded he report to the police station. He didn’t, and a few weeks later a well connected student said that both Meraj and Anahid had been discussed during a high level meeting of the city authorities. “They said we have music in this city and there is a group named Master of Persia. The girl has a shaved head and is a Satanist,” he said.

A prominent local religious leader, Ayatollah Alam Alhoda told the meeting that the band were clearly kaffirs, or unbelievers, and demanded that the authorities deal with them. This, said Meraj, was serious. “When a big mullah says ‘kaffir’ this is no joke.

They don’t need the documents and the law – they will kill you,” he said. Ayatollah Alhoda also had priors: in 2012 he called for an Iranian rapper, Shahin Najafi, who lived in Cologne, to be assassinated. Najafi was later given a death sentence for apostasy by another hardline cleric based in Qom and an Iranian news website announced a $100,000 reward for anyone who would kill the rapper. Within four days, Meraj had sold his car for $4,000 and he and Anahid had fled Iran, first travelling to Tehran and then across the border by bus. They have not been back since.

Meraj met Anahid when she was a student at his martial arts school in Mashhad and in 2008. Meraj was national champion in both jiu jitsu and karate and had won both local and international championships and many young men and women attended his school, including Anahid. When she was 18, she joined Masters of Persia. Meraj had founded the band three years earlier, in 2005, and had already performed for friends at secret gigs in Mashhad, which despite being deeply conservative was home to a large heavy metal scene.

Metal fans in the city would grow their hair long but tuck it into their t-shirts or jackets to avoid scrutiny from the religious authorities. They would also drive rather than walk the streets to avoid the attention of the police. “It was a risk. We had to hide ourselves from the eyes of the police. But the metalheads were bravehearts. They didn’t care about the law,” he said. 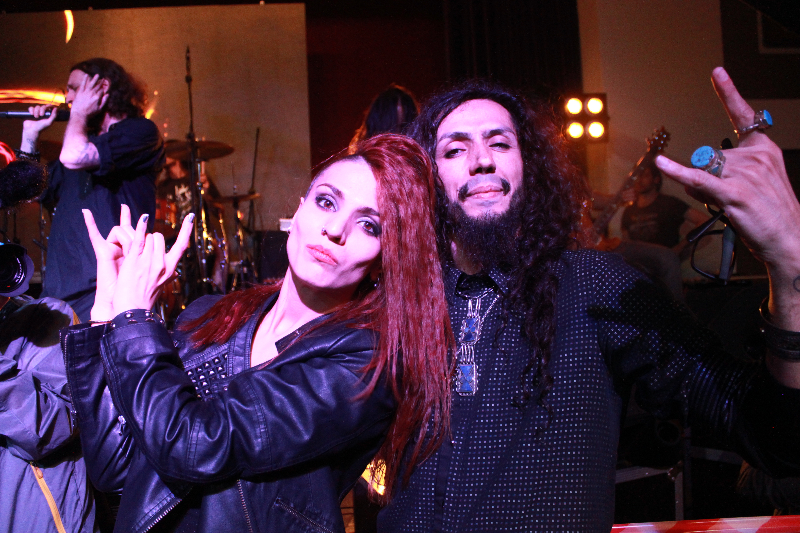 Every three months Meraj invited the various bands in Mashhad to jamming sessions at the secret music studio he had built at his martial arts school. He would call each person individually and instruct them only to come in groups of two or three. When they were nearby, they would call and he would let them in. “It often took four or five hours to get everyone into the place – and then the same to get them all out again – sometimes there were more than 100 people there,” he said.

But the sessions were an invaluable way not only for the bands on the scene to form bonds but to share techniques and learn from each other. If anything, Meraj said, the risks that metalheads had to go through in Mashhad meant that the scene there and in wider Iran was far stronger than elsewhere in the region. “The Islamic system in Iran says that anyone who works in underground music is not only a Satanist but a kaffir. With that kind of risk I can say that we are more active and serious than other countries in the Middle East,” he said.

If the risks were severe for Meraj and the other male members of the scene, they were far worse for Anahid. Her parents never supported her music and ended up throwing her out of the house because of it. Iran had a tradition of female artists that stretched back for hundreds of years but after the revolution of 1979, women were banned from singing live in the country. Shia clerics argued that the sound of a woman’s voice aroused sexual feelings in men. The law was later amended to forbid women singing solo to men who were not related to them.

In 2015, conservative cleric Hassan Nouri Hamedani specifically referenced the use of female vocals in music, arguing that it led to sexual arousal. “No action can normalise women’s singing,” he said. “We will stop it.” Female metal musicians in Iran didn’t only risk jail, but so-called ‘honour attacks’, particularly in a religious city like Mashhad: “There was the fear of arrest and imprisonment and even having acid thrown on the face or bodies of women who were active in music – even death in some cases,” she said. “In my opinion this is one of biggest reasons that Iranian women are not that active in music, especially in heavy metal and rock.”

Meraj and Anahid have lived in exile since 2012, but the risk from the authorities is so severe that they will not officially reveal where. They continue to play shows and record tributes to the bands that they grew up listening too, including Sepultura, and have gained a huge following both inside and outside Iran. While in recent years a number of stories have arisen of live shows being held in Tehran (albeit often without vocals), Meraj dismisses it as a con. He remembered that when Ahmadinejad was first elected in 2005, he also said that the Iranian youth would be free, and that he would allow a cultural space to form in Iran.

Once elected, he became one of the most authoritarian leaders the country has ever had. The live shows that have been held since the signing of the nuclear deal are part of the same process. “They are just showing off, for social media, to say that we are free here. But the government is crazy – they can change their mind at any time.” Meraj is no longer active within Iran, but he keeps well briefed on the scene back home, and estimates that there over 1,700 active bands: “I am connected with most of them.”

Rock in a Hard Place: Music and Mayhem in the Middle East by Orlando Crowcoft is published on 15 June by Zed Books. Pre-order your copy now.

Linkedin
RELATED ARTICLES
OTHER ARTICLES
Tristan O’Neill’s shots of dancers caught in moments of reverie at the height of rave’s golden age are a testament to the UK’s legendary club culture.
After building his reputation covering the US civil rights movement in the 1960s, the photographer went on to produce some of the most enduring images of the past century.
After fleeing the war in Ukraine, people are finding it impossible to secure affordable and decent housing in the UK.
Filmmaker Laura Poitras discusses her new documentary which traces the remarkable life of the artist-activist and the impact of her battle against the US opioid crisis.
Photographer Sean Maung reflects on documenting a small town in Pennsylvania afflicted by high levels of unemployment, poverty, violence, crime, and addiction.
The action took place in response to the 200 asylum-seeking children who were placed in hotels run by the Home Office who have gone missing.