Blind since birth and reclusive by nature, Pauline Anna Strom’s spacey electronic music has been building a cult following for decades – but she remains little-known in the mainstream music world.

Blind since birth and reclusive by nature, Pauline Anna Strom’s spacey electronic music has been building a cult following for decades – but she remains little-known in the mainstream music world.

Not much is known about Pauline Anna Strom. A decade-old comment section belonging to an arcane online weblog that details obscure and out-of-print records is one of the most populated sources of information on the electronic musician. Archival interviews are treated with an almost biblical reverence, commenters issuing desperate calls in hopes of locating physical pressings of Pauline’s work. It’s a cult-like, impassioned following of a musician who, for the most part, is nestled in obscurity.

“I’m pretty much a loner, and I pretty much operate alone,” Pauline tells me. “I just quietly do what I do.”

Pauline is a self-taught New Age composer and synthesiser whose work has been overlooked within the electronic music canon. Blind since birth, she has been described in faint, reverent tones as one of most obscure pioneers of home-produced synthesiser music of the ’80s, her drifting and spacy records sending the listener on journeys to other worlds.

And yet, despite the mastery of Pauline’s work, she remains a forgotten chapter of electronic music history; her records slipping into the more obscure annals of want lists and bootleg editions on websites like Discogs. Her 1982 composition “Morning Splendour” was included in a Late Night Tales compilation album by psychedelic rock group MGMT in 2011. The mix is described as a “selection of post-punk, cult indie and counter-culture figureheads that reflect the band’s multifaceted sound,” and a quick foray into the YouTube comments of the piece have listeners wrongly attributing the track to MGMT – despite Pauline being credited as the artist.

“I have a unique way of living, and a unique way of doing what I do,” she tells me. “That may be a big part of it, of being an individual and not being part of the crowd. I really had very little to do with how my music was accepted.”

Fearlessly independent, Pauline’s approach to both her music and her life is to always celebrate her own individualism. She entirely self-produced her records, equipped with a Tascam four-track record and a small army of synths – a Yamaha DX7, TX816, CS-10.  Her blindness and lack of experience as a composer enabled her to explore a vast electronic soundscape through her records – which are full of feeling, and stunningly beautiful.

“I decided to buy my first synth, and it went on from there,” she remembers. “When I got introduced to synthesisers, I fell in love with electronic music. I felt that electronics expanded the ability to create from your imagination.”

Pauline’s own incentive to pick up her first synthesiser is particularly interesting when you consider the attitudes towards women in electronic music. Very rarely do you see women working as sound engineers, or even encouraged to – and when they are, they’re often patronised. To change this attitude, says Pauline, we need to eliminate of a fear of judgment.

“I think the key is encouraging young women to be their own highest authority,” she says. “You have to let go of what people think, and know that you’re true to yourself.” 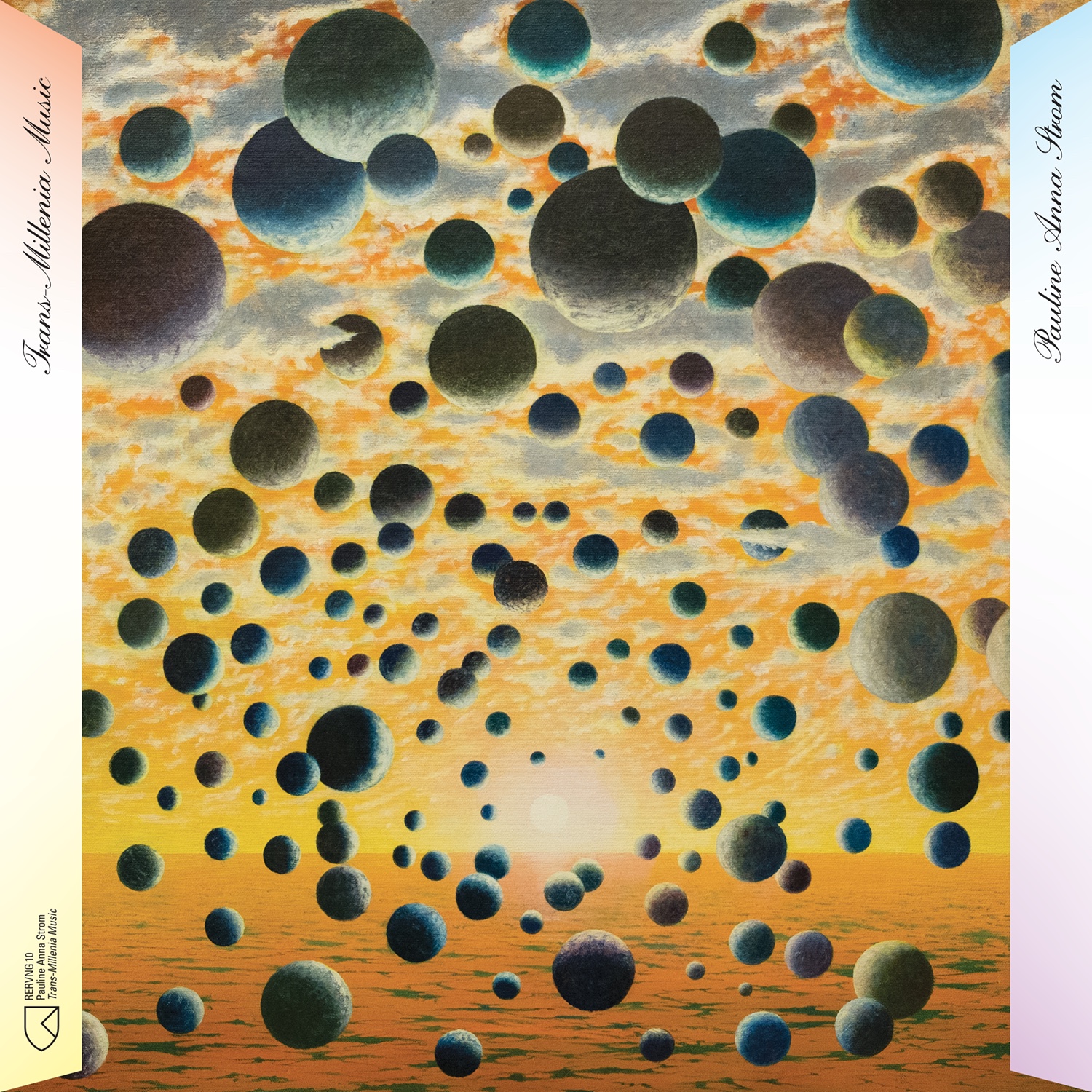 She remains coy when asked if she thinks her gender has anything to do with her music not getting the wider recognition it all deserves: “My main interest is the creativity. If something happens with it, good. Whatever the business part is, I’ll leave that to people who have the expertise.”

When asked if the landscape has changed for women in electronic music, she pauses; before uttering a “yes” quite begrudgingly. “It’s improved in the sense of how there’s more freedom now, but there always should be more women,” Pauline continues. “But in some ways, it’s the same. Technology evolves, but human nature doesn’t change.”

Trans-Millenia Music, set for release next month, is an archival selection of Pauline’s diverse body of work.  Her string of three full-length records – Trans-Millenia Consort, Plot Zero and Spectre – navigate through her universe of ambient music. The records are thematically varied, lingering in the spiritual world of spacy mind trips and then exploring modern violence and vampire legends. In the liner notes of Trans-Millenia Consort, released in 1982, Pauline writes: “I have always been in touch with the past more than the present.” It refers to ideas from Pauline’s vast imagination which she translates as concepts into her music.

“I believe in reincarnation,” explains Pauline. “Past, present and future, in my philosophy, are all in present time. I believe we pull in knowledge from the past and from the experiences we’ve probably had in other times and other realms.”

Her internal vision is likely so vivid due to her being robbed of sight, prompting her to hone in on her likely heightened other senses: “I translate visual concepts in my head into audio. What inspires me are ideas that are totally unrelated to music but then translating them into music.”

It’s such an innate approach that Pauline struggles to definitively outline her method. “I have no idea what’s going to come out when I create, just the concept,” she continues. “I start with a waveform. It grows as if you were painting a picture in sound. Your music becomes a part of you.”

It was by moving to San Francisco that she developed an interest in the New Age scene and contemporary works by Brian Eno, Tangerine Dream and Klaus Schulze. She still credits them with her approach to her composing still today, citing the “timeless” nature of the frequencies, vibrations and harmonies of the music. This aspect of timelessness recalls Pauline’s own philosophy that everything in the now is rooted in the past, future and present, which evidently plays a part in the everlasting nature of her sound.

And yet, with the sonic soundscape ever-evolving, Pauline has rejected the notion of going digital with her music, preferring to remain analogue – but acknowledges the vast possibilities of the rapidly growing electronic music environment. “I’m not going to do it all on a computer like a lot of people are doing now. It’s artificial. You can’t put your soul into it like you can with a keyboard,” says Pauline. “Technology has changed, and everything I used was analogue. So what exists now could give me a vast range of sounds of what I can change, work with and create.”

You wonder, then, the extent to which Pauline’s music has permeated the realm of electronic music from the ’80s and beyond. Having influenced the likes of MGMT without the majority of the band’s mainstream fans realising it, you are left to ponder who else has been so affected by her work – subconsciously, quietly, faintly laying down the framework eventually picked up by those who took ambient electronic music to the public sphere.

Trans-Millenia Music  – a collection drawing from Pauline’s “most evocative work” from 1982 to 1988 – is released on November 10 via RVNG.

Linkedin
RELATED ARTICLES
OTHER ARTICLES
After building his reputation covering the US civil rights movement in the 1960s, the photographer went on to produce some of the most enduring images of the past century.
Campaigners reflect on what the supreme court’s decision to allow buffer zones in NI means for the future of reproductive rights in the UK.
David 'Dee' Delgado’s photo project is about honouring and uplifting the city of his youth, and a world rapidly disappearing under the relentless onslaught of gentrification.
Activists and campaigners are fighting back against new laws that would seriously undermine the ability to take industrial action, calling it an attack on fundamental workers' rights.
Yohon Tatum, aka Legendary Father of the House of Tisci, reflects on nurturing a new generation of talent.
Photographer Sean Maung reflects on documenting a small town in Pennsylvania afflicted by high levels of unemployment, poverty, violence, crime, and addiction.