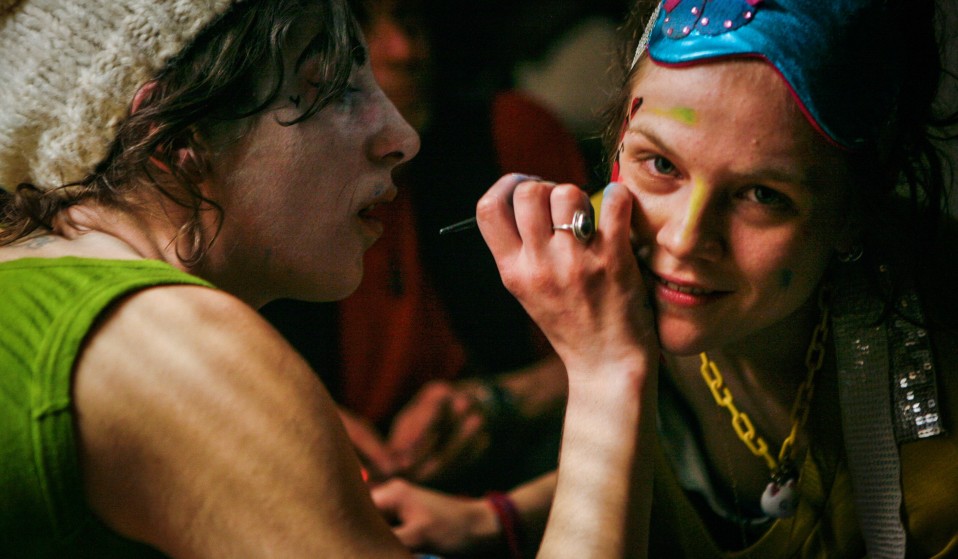 Partying for free and getting smashed in a field was a rite of passage in 1990s Britain. Then the police came in and tried to spoil the fun – but people are still raving. Even Facebook can’t commodify this wayward social network.

Partying for free and getting smashed in a field was a rite of passage in 1990s Britain. Then the police came in and tried to spoil the fun – but people are still raving. Even Facebook can’t commodify this wayward social network.

Everything starts with an ‘E’. Especially when it comes to raves. While the history of free parties – get rig, find site, play music, cavort, clean up, disappear – extends back to the countercultural flowering of the First Summer of Love, their modern incarnation in the UK can be pegged to the 1987 arrival of ecstasy – first synthesised by Alexander Shulgin (for therapeutic purposes) in the late 1970s.

By the early 1990s, a cultural revolution was underway, and smiley faces infiltrated the underground and mainstream alike. Things hit a peak in June 1992 with Castlemorton Common – a 30,000-strong free party that, according to Digs from Nottingham’s DIY collective, was “our generation’s Woodstock.” 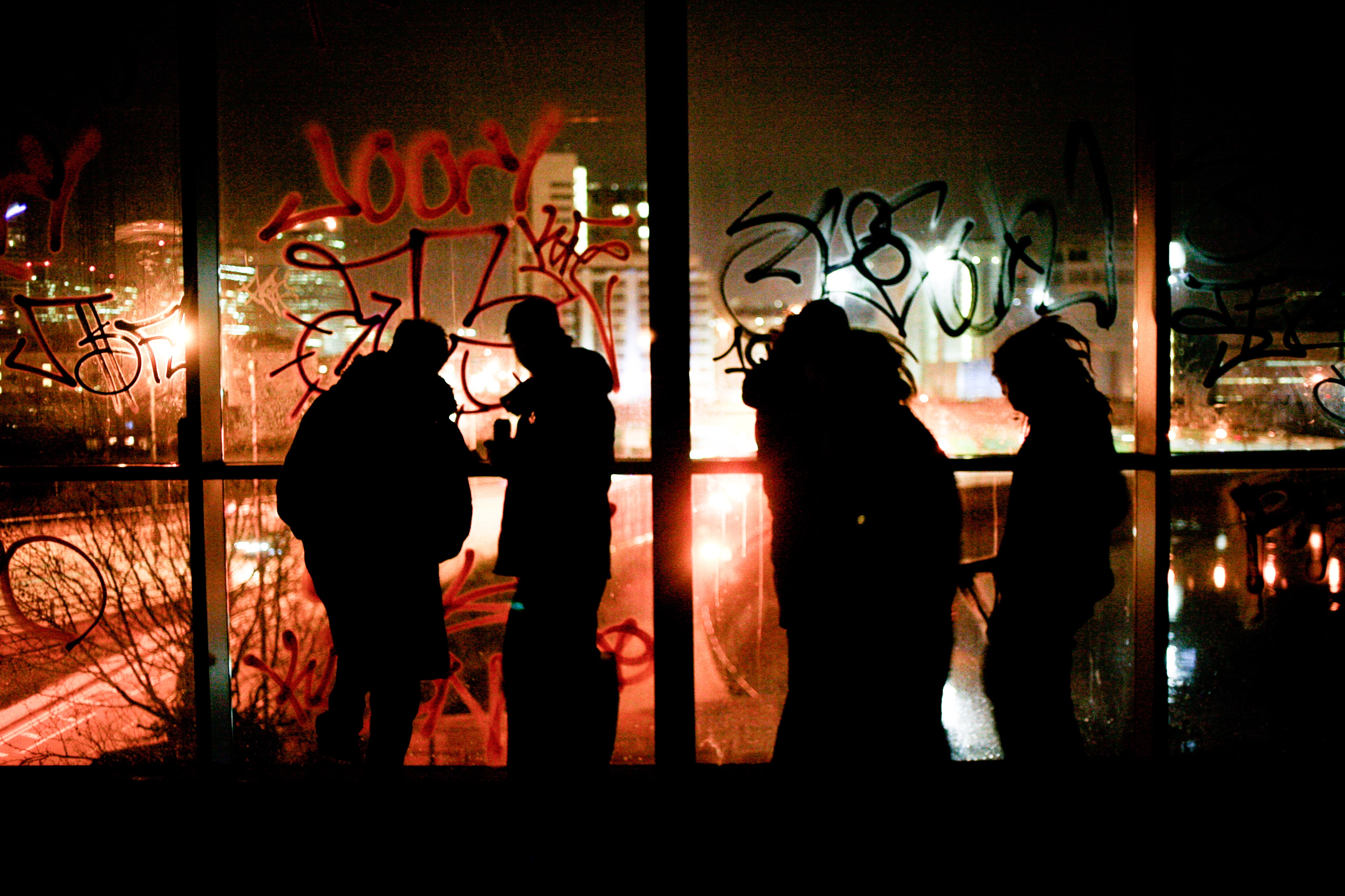 Soon, right-wing tabloids were awash with scaremongering stories that painted ecstasy deaths and wayward ravers as a threat to civilised society. Curtain-twitching Middle England was not impressed. So, in 1994, Conservative Prime Minister John Major put everyone’s minds at ease when he rushed through the egregious Criminal Justice and Public Order Act, banning public gatherings “wholly or predominantly characterised by the emission of a succession of repetitive beats.” But was raving really ever a threat to the English way of life? Or was it just a way to get spangled on your own terms – gathering where you want, within your own means – without having to pay for the privilege?

That’s the view of Nick, a raver from Bristol and part of a sound-system who, in the early naughties, caught the tail-end of the European Teknival circuit started by Spiral Tribe, Desert Storm and other traveller collectives. It was these nomadic groups who, according to Nick, “were the real target of the Act,” given that they eluded tax, work, rent and ostensibly existed outside the system.

Sure enough, after riding the Teknival wave for a decade or so, the net started to close in as governments on the continent followed the UK’s lead. In France, the so-called Mariani Law led to dozens of rigs being impounded and, eventually, to a compromise whereby only a certain number of legal raves could take place.

If not sanitised, parties like Frenchtek were watered-down by the new regulations. “They were still pretty chaotic inside,” recalls Nick, “and it was a good opportunity for UK rigs not on French databases to play a big event.” But, throw in the punitive toll of years of hardcore living and the vestiges of rave’s utopianism began to flicker out. 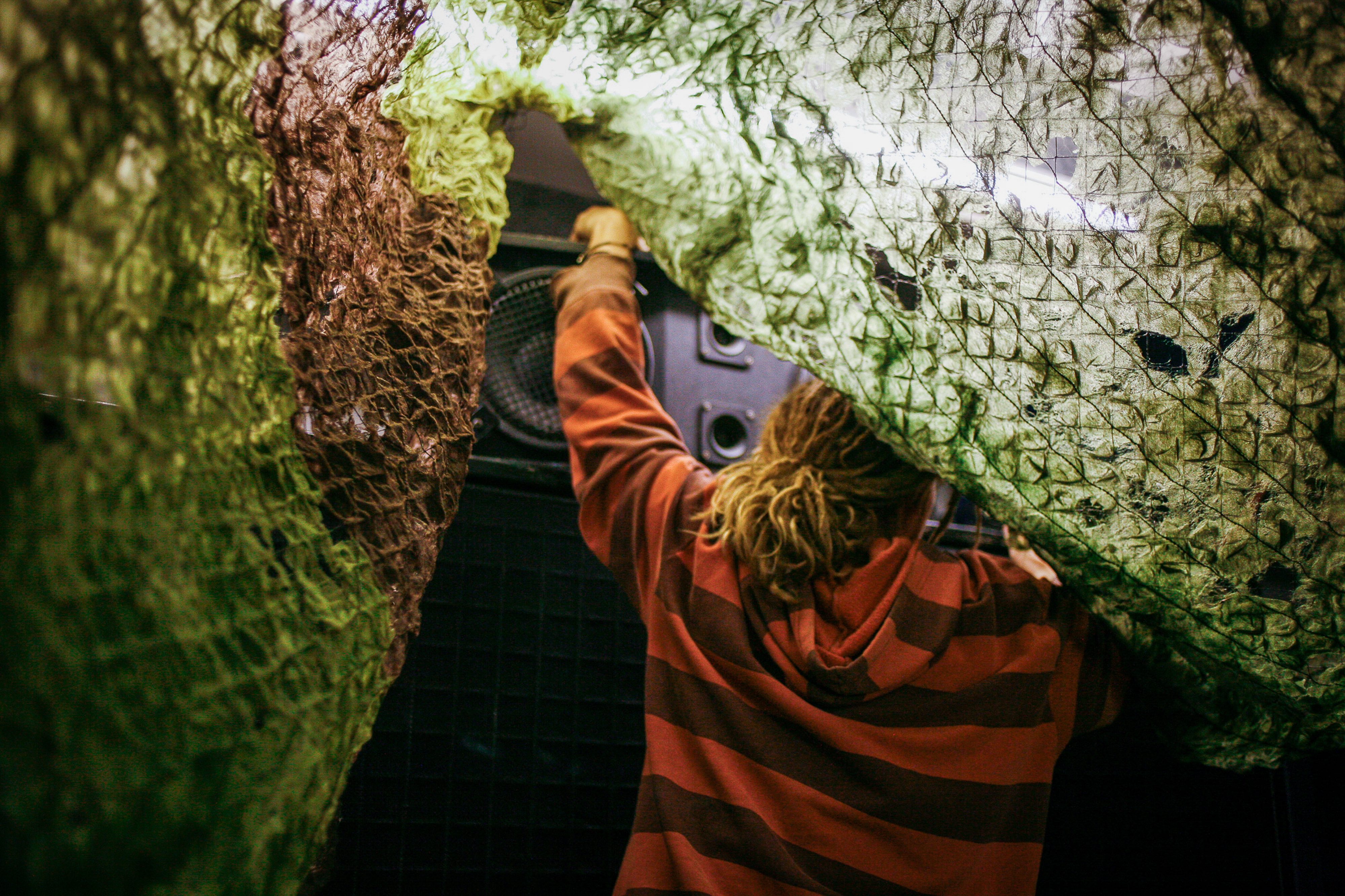 After the Criminal Justice Act, a scaled-back free-party scene took to the fields and the forests, the nooks and crannies of post-industrial Britain, playing a game of cat-and-mouse with police, who often chose to turn a blind eye. “I used to enjoy going out at sunrise to chat to the one copper that had been put there to keep an eye on things,” recalled DiY’s Jack. “They were always like, ‘I don’t have a problem with it. You have fun and there’s no trouble.’ They were used to drunken lads in town centres beating the shit out of each other. Obviously, there were the drugs, but if no one complained about noise and traffic, the police were happy to let it go on.”

Parallel to these rural capers, urban raves continued to pop up in disused warehouse spaces. But they brought their own problems, says Hue Jah Fink, who squatted through much of the naughties and deejayed with the Unsound and Headfuk crews. “The police might stop it in the early stages of the night before many people had turned up. But once the parties were in full swing, negotiation usually went our way.”

They had a different experience when taking that multi-rig approach out into the fields, however. “That’s when we didn’t have the backdrop of chaos in the city to make our activities seem insignificant,” he adds. “Our various dalliances were quite often met with helicopters, convoys of wagons and armies of cops in full-on riot gear.” 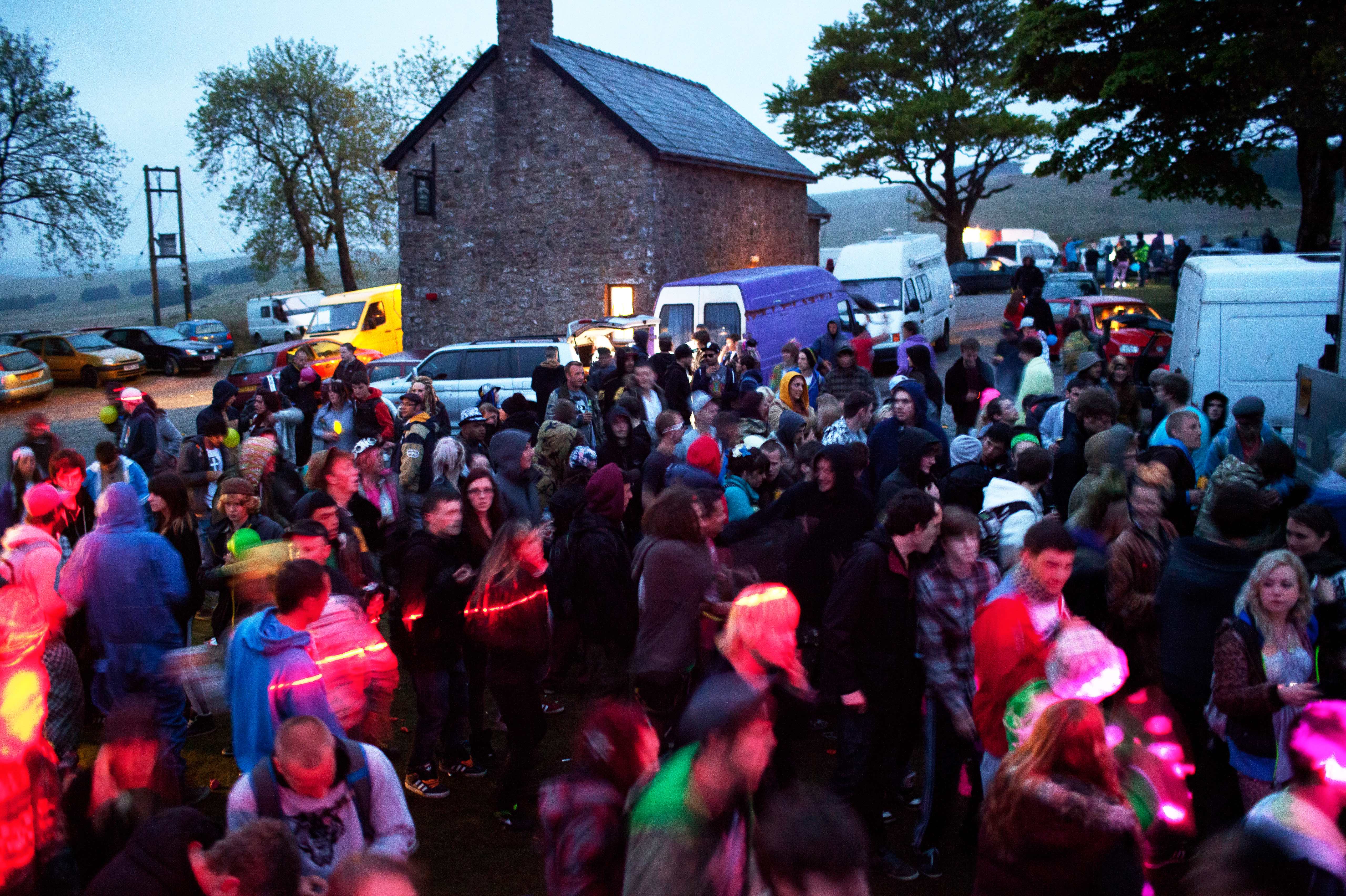 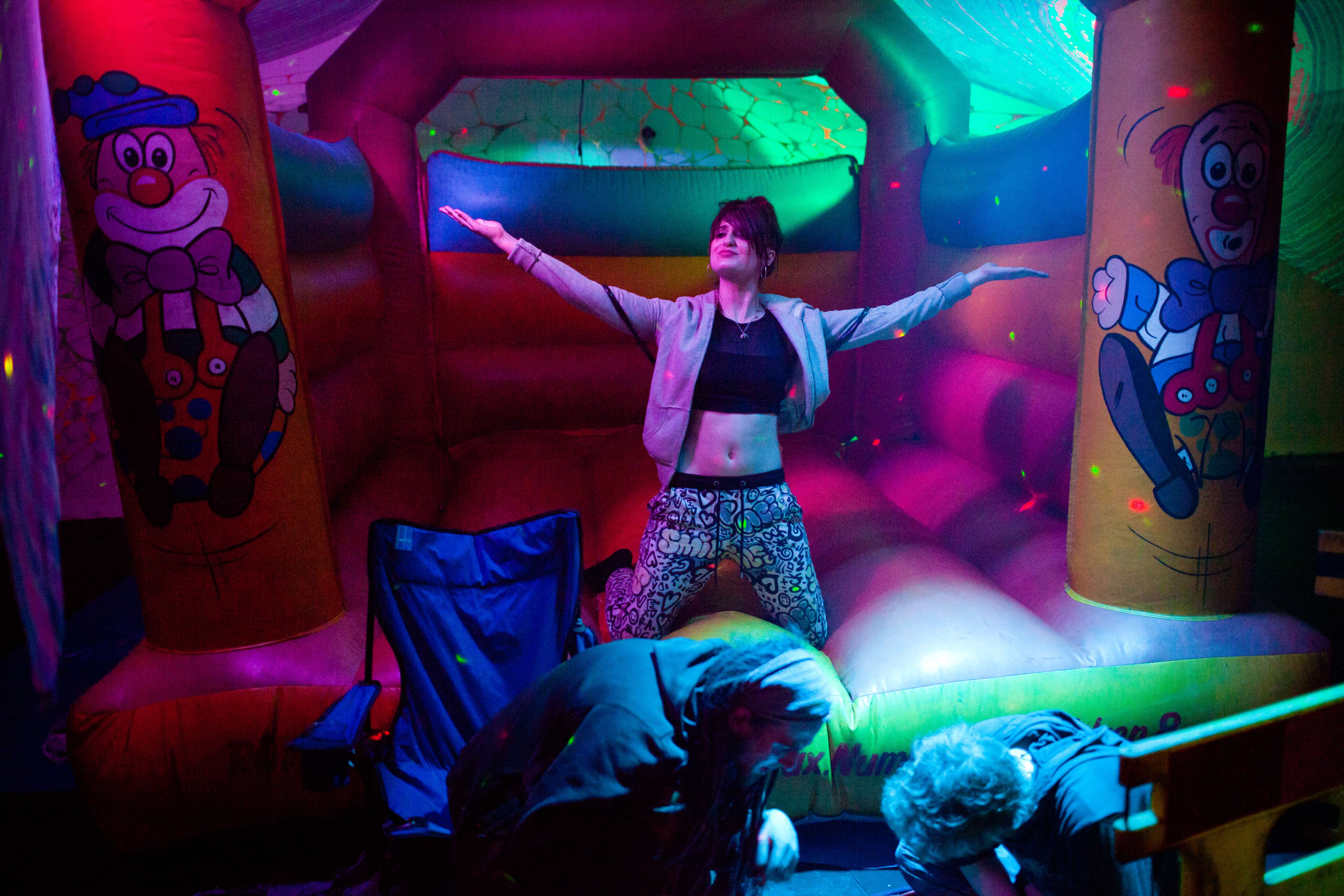 But what about today? According to Ellis from Right Wronguns, a young London-based crew operational for four years, finding party sites has become more difficult as the capital starts to pull itself from recession. Then there are “changes to the squatting laws, the fact that security has tightened up, with CCTV everywhere” and a recent spate of drug deaths forcing a previously laissez-faire police to visibly clamp down.

Even social media – the ‘tool of the people’ during the Arab Spring – has worked against ravers. “It’s been a really bad thing for rave,” says Nick, unequivocally. “And a gift to the police, who are like, ‘Safe, I don’t actually need to do any real work, I can just go on Facebook and scope out photos.’ They have a window into this world they didn’t have before.”

The intrusion on the rave space has also bred vanity, says Nick. “Let’s face it, if you’re getting muntered at a party you’re not going to look your picture-perfect best. Back in the day, you’d go along, someone might take a few photos and you’d privately laugh with your mates. Now, everyone’s got a camera-phone, and it’s plastered all over Facebook. So some people hold back. Part of the fun of raves used to be everyone got filthy and no-one really cared.” 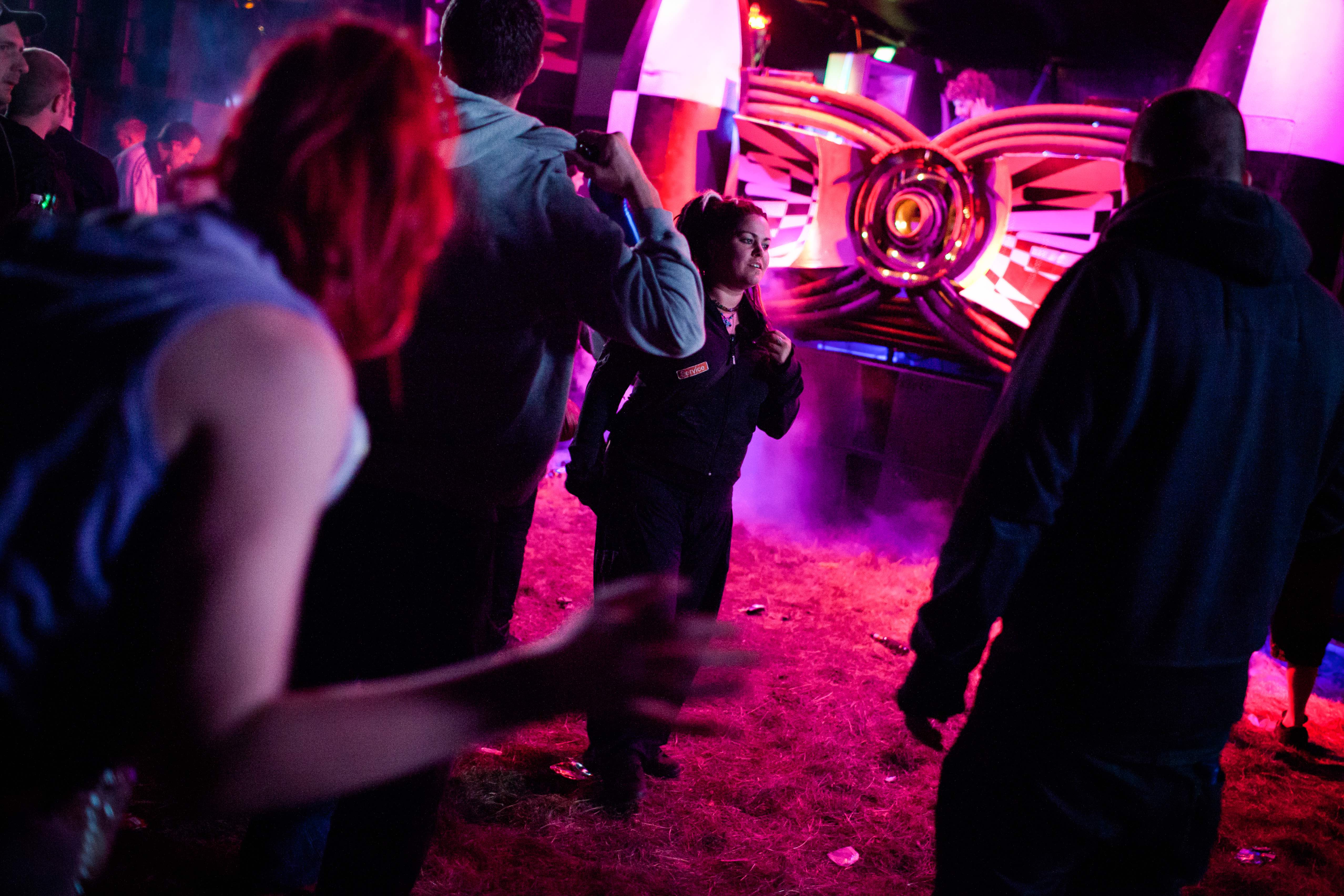 Hue Jah Fink points out a universal fear as life moves online. “Web-based social platforms have played a large part in the erosion of real communities. Each person is desperately trying to get heard in a wall of chirping noise. And these new social networks feel very much like a poor holographic imitation of the strong bonds that tied us all together not so many years ago. We had to stick together. We were strong together, as individuals. I’d like to see a return to more personal communication, even if it is web-based. Less of the shouting out to everyone, and more focus on smaller communities that share common goals.”

And then there’s the way parties are promoted online, rather than organically via word of mouth. As Ellis says, “You don’t want a thousand people there you don’t know.” Size matters. You want it throbbing, but not too big. And there’s a bottom-up mechanism for self-organising into an optimal size – a self-policing, dickhead filter, if you will. “You’re accountable for who comes along,” he adds. “You vouch for them and it’s traced back to you.” 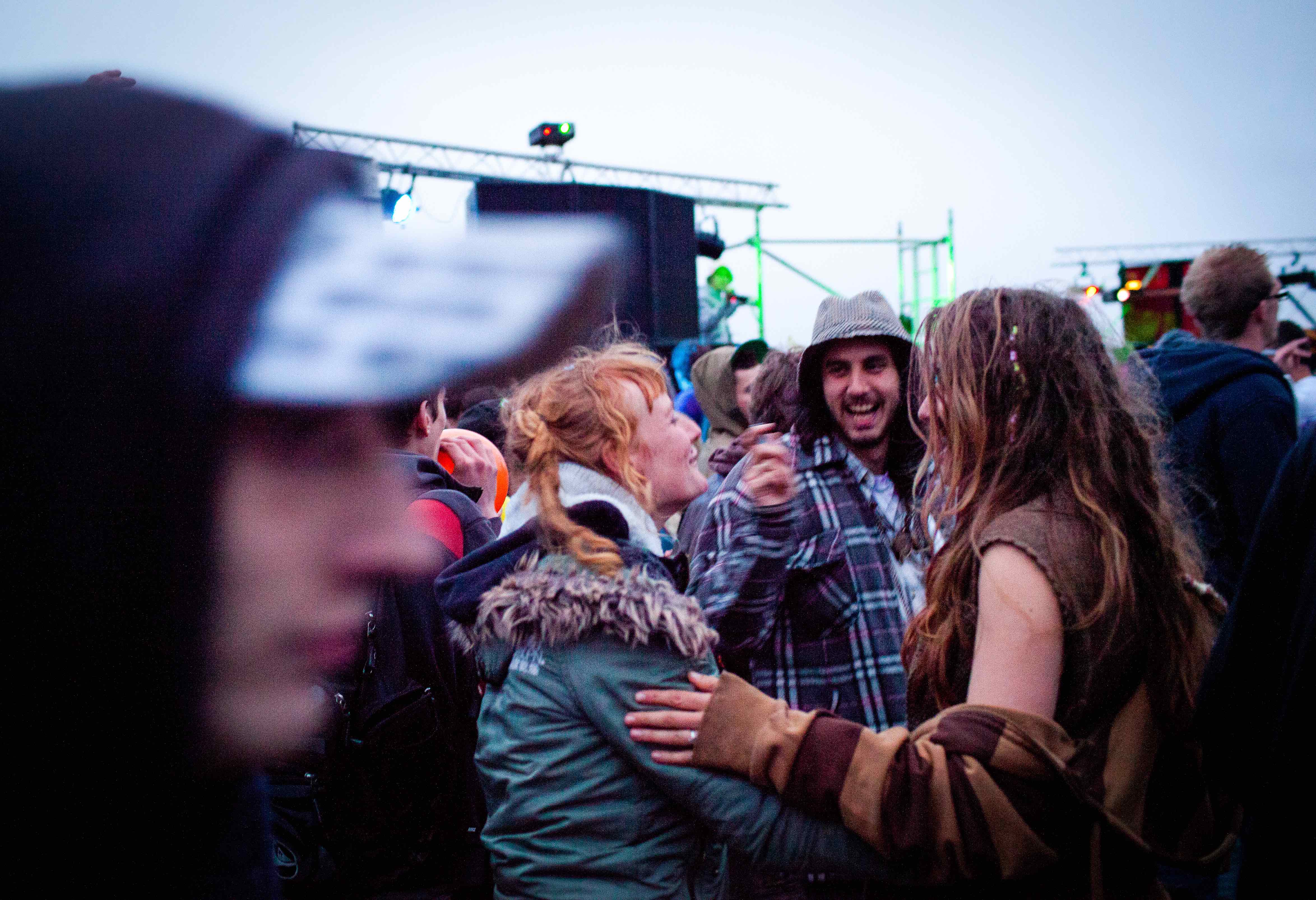 Self-policing is fundamental to the free-party way of life – a central rebuttal to draconian legislation. Consenting adults ought to be able to get together under their own steam and, well, get steaming. It’s about freedom of assembly and ownership of your own flesh, so readily captured and belaboured by the social and corporate machine. “We were rebelling as much against the commercial side of rave culture as any political system, really,” says DiY’s Jack.

And therein, perhaps, lies rave’s ‘politics’ – not in catalysing the overthrow of the state, or even social upheaval, as the heady early 1990s might have briefly promised, but in fighting for your right to party.

It seems self-evident that it’s in the state’s interest to regulate its citizens’ pleasures; make their desires align with the requirements of social order. (The genius of capitalism, of course, is that it no longer tells us what, specifically, we have to believe in or desire; it merely enjoins us to consume.) But in response to this enforced docility, free-party crews continue to emerge – crews such as Right Wronguns, whose simple aim is “to put on something different from what society offers. And maybe that will lead them to stand up for something.” 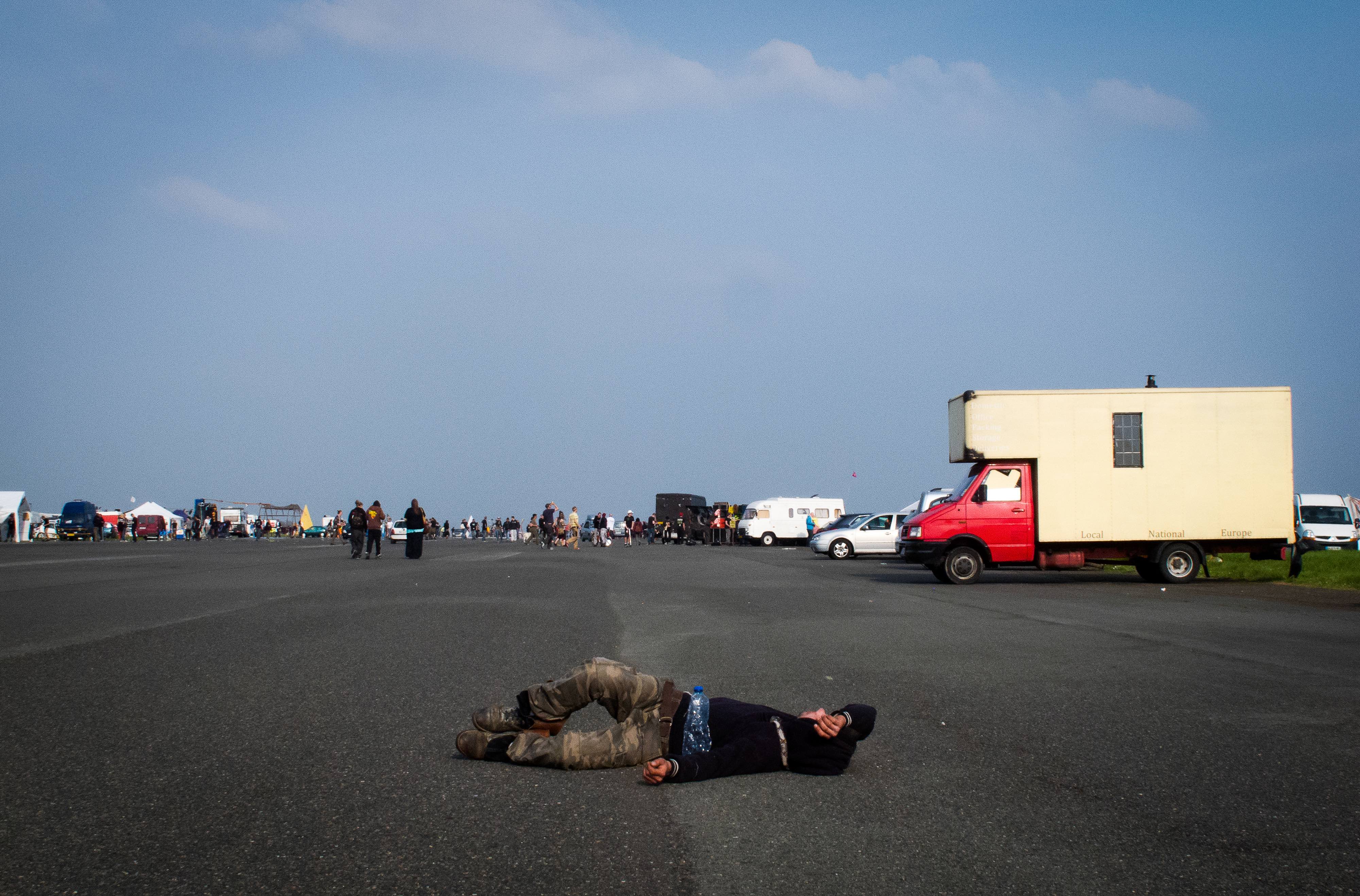 The question posed of raving – “Hedonism or politics?” – was based on a faulty premise. Perhaps pleasure-seeking and politics aren’t quite so easily untangled? And even if rave culture’s politics were overstated, it is and always has been a honeypot for oppositional attitudes – a sorting device filtering out the conventional, the conservative, the conformist. It’s a positive alternative to venting through riots. Escape, not destroy.

And in this story of self-organised society, there may well be a place for technology yet. A lesson came in the aftermath of DiY’s twenty-fifth birthday, in a Leicestershire field, last August. 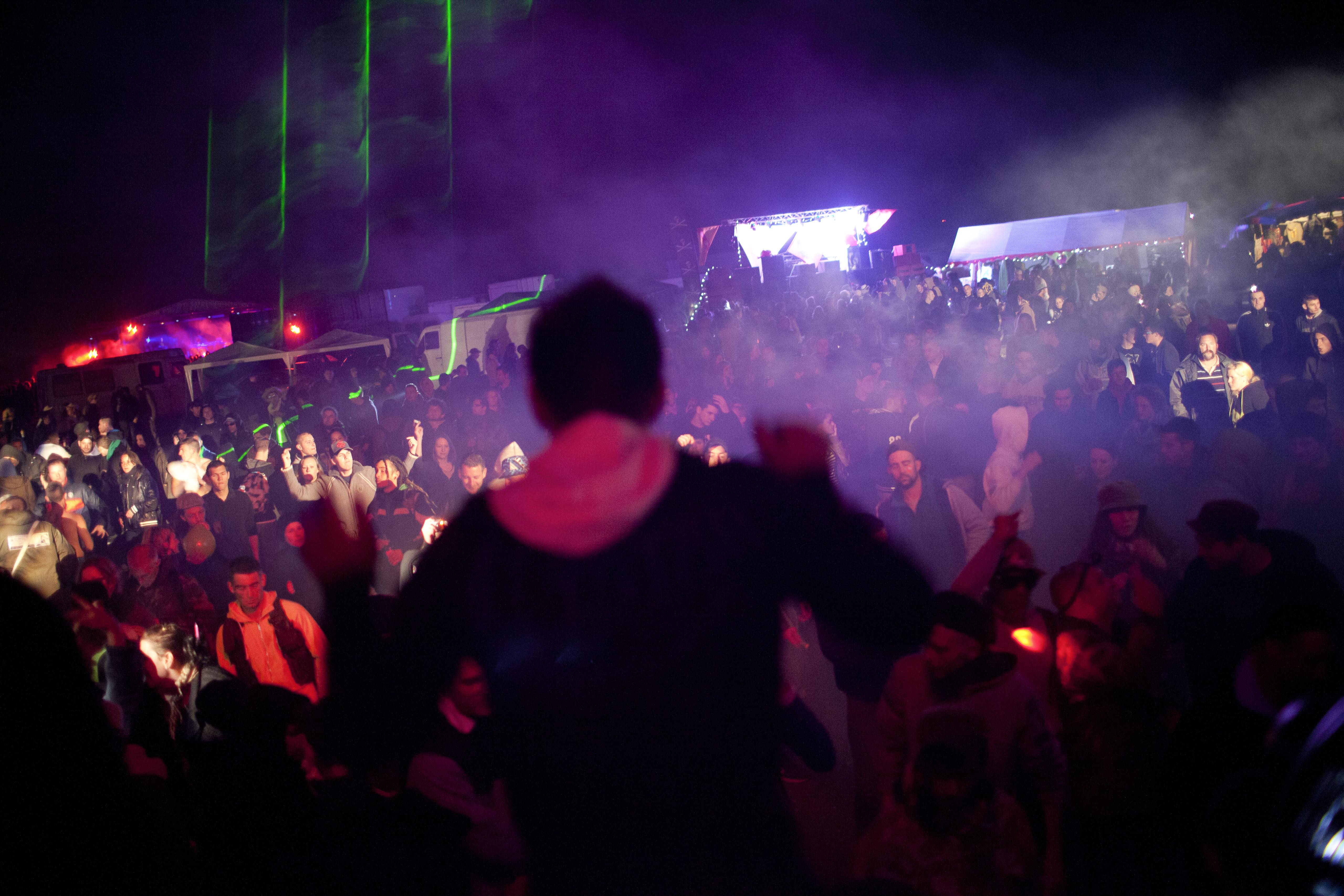 After revellers petitioned long and hard (on Facebook) to celebrate the milestone in the appropriate manner, the veteran crew announced a date (on Facebook, although, naturally the location was secret). A deal was cut with a landowner, who got cold feet around 6AM, eventually getting the party shut down at 9AM. Several hours later, DiY’s hire van was broken into and a generator costing £400, donations bucket containing a similar amount, and two priceless crates of tunes were stolen. News reached the partygoers (via Facebook) and the response was swift, with a spontaneously self-organised fundraiser through a PayPal account and impromptu, informal online auction. Donations poured in, while various creatives given an early leg-up by DiY offered framed original photographs, flyer collections, record label back catalogues and paintings, raising over £6,000 in a few weeks – enough to cover losses, with the surplus ploughed back into another party.

Of course, it is impossible to imagine such a response without social media to facilitate it. Online communities can cultivate the same conviviality that underpins all healthy social bodies, but if you expect raving to be a proxy for real political engagement then you’re barking. And up the wrong tree, at that. Revolutionary energy must connect, not spin in the void; drug epiphanies must be given more durable sustenance. But don’t underestimate the curiously sublime beauty, the political nourishment, the unalloyed optimism of dancing at dawn in the fields.

This article appeared in Huck 47 – Julian Casablancas. Subscribe to make sure you never miss another issue.

Linkedin
RELATED ARTICLES
OTHER ARTICLES
Photographer Bud Glick recounts documenting everyday life in the area, and what it taught him about the Chinese immigrant experience.
A series of photos by the late Jerry Dantzic taken in 1957 show a tender side to the iconic Jazz musician.
A new series of photos by Johny Pitts shines a light on communities and subcultures that have all too often been overlooked.
In the latest instalment of Photographers in Conversation, the creator talks portraiture, platforms and taking inspiration from Little Simz.
Students are being left to languish in unsafe housing, in some cases leading to serious health complications.
As the Criminal Bar Association enters its fifth week of action, criminal barrister Russel Fraser explains why the legal professionals have walked out and how action is likely to escalate.