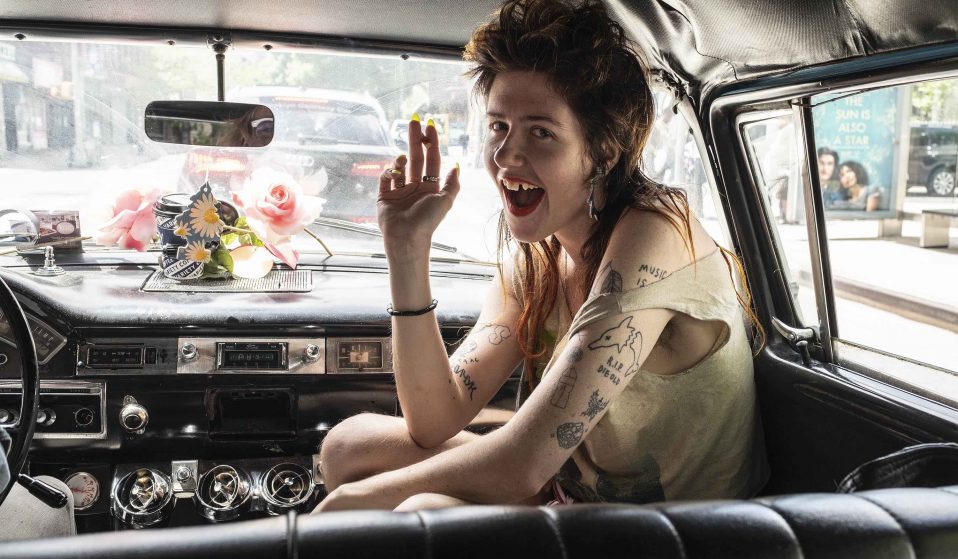 As leader of New York garage punks Surfbort, Dani Miller is on a mission to champion self-acceptance in the name of outsiders everywhere.

As leader of New York garage punks Surfbort, Dani Miller is on a convention-defying, anxiety-confronting mission to champion self-acceptance in the name of outsiders everywhere.

Dani Miller’s path to becoming one of the most extraordinary bandleaders in recent years can be traced back to her childhood. She was known for climbing onto the bonnets of cars that her father sold at his dealership, launching into a sales pitch directed at a crowd of imaginary customers. But in the confines of home, she’d take it up a level: grabbing a red cowboy hat and constructing wild dance routines in front of her parents. “One day they put on a record and I just went super insane – they thought that I was almost acting… sexy,” she says, laughing. “They were like, ‘What the hell is going on? Did you teach her that? Oh fuck. We’re fucked!’”

Over 15 years later, that explosive energy is mostly reserved for Surfbort: a visceral punk band whose lyrics flip from silly to confrontational in a way that few others can pull off. (The name is derived from a Beyonce lyric, itself a reference to a bathtub-based sex act.)

Danis is 26 but her bandmates – guitarists Alex Kilgore and Dave R. Head Jr., along with drummer Sean Powell – are all in their late forties and early fifties, veterans of the Texas punk scene. (Kilgore is a father; Sean a grandad.) Even without that contrast, Dani’s image feels like a glorious fuck-you to convention. She sports a mullet, doesn’t care about shaving and flaunts a manic, gap-toothed grin at every opportunity. On stage, she throws herself around as if possessed, often passing the mic to give others an opportunity to let it all out.

“Everyone needs, or deserves, the chance to push through their nerves and go wild,” she says, speaking over the phone from her home in New York. “There’s definitely an iconic, god-like thing [to being a bandleader], but it’s cool dismantling that. It’s about all of us… so let’s fucking make it fun, something to laugh about tomorrow.” 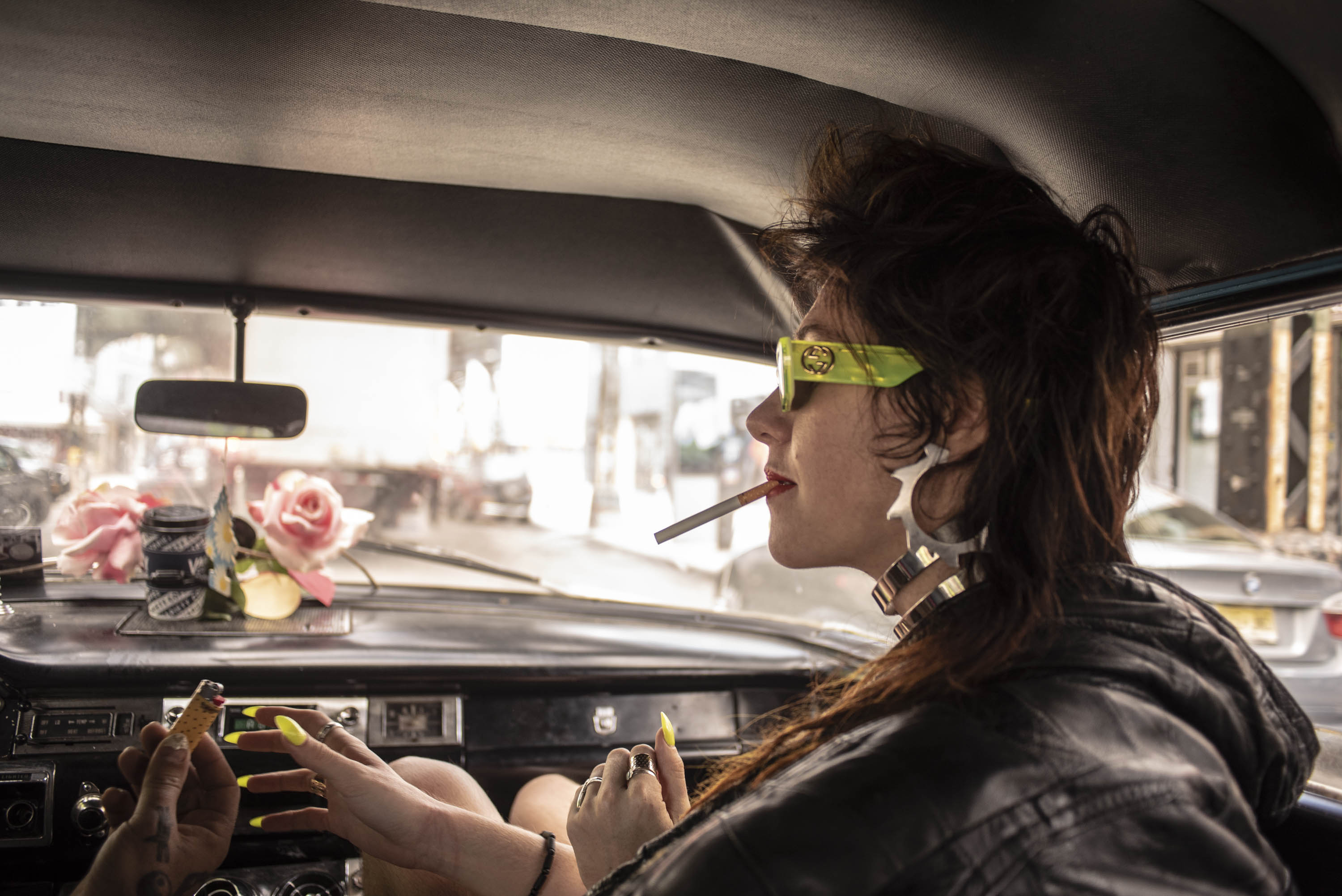 Dani was born in San Luis Obispo, California. The family moved around a lot during her childhood, meaning that Dani – a “little ginger freak”, in her own words – often bounced between different friendship groups. “It makes you realise that home is just wherever you are,” she says, her Valley inflexion still intact. “You also learn how to see through the haters, and the bullying, and still have fun.”

A gifted student, she eventually secured a place at college in San Francisco with the long-term plan of studying film. It was around this time that Dani fell into hard drugs – something she talks about openly without getting into specifics – and would grapple with addiction for the next few years. “I somehow got straight As, but I was really fucking up drug-wise and shit,” she remembers. “I finally overcame that through this crazy realisation that this was not the life I wanted to live. I didn’t want to be dead or suffering – or in jail.” 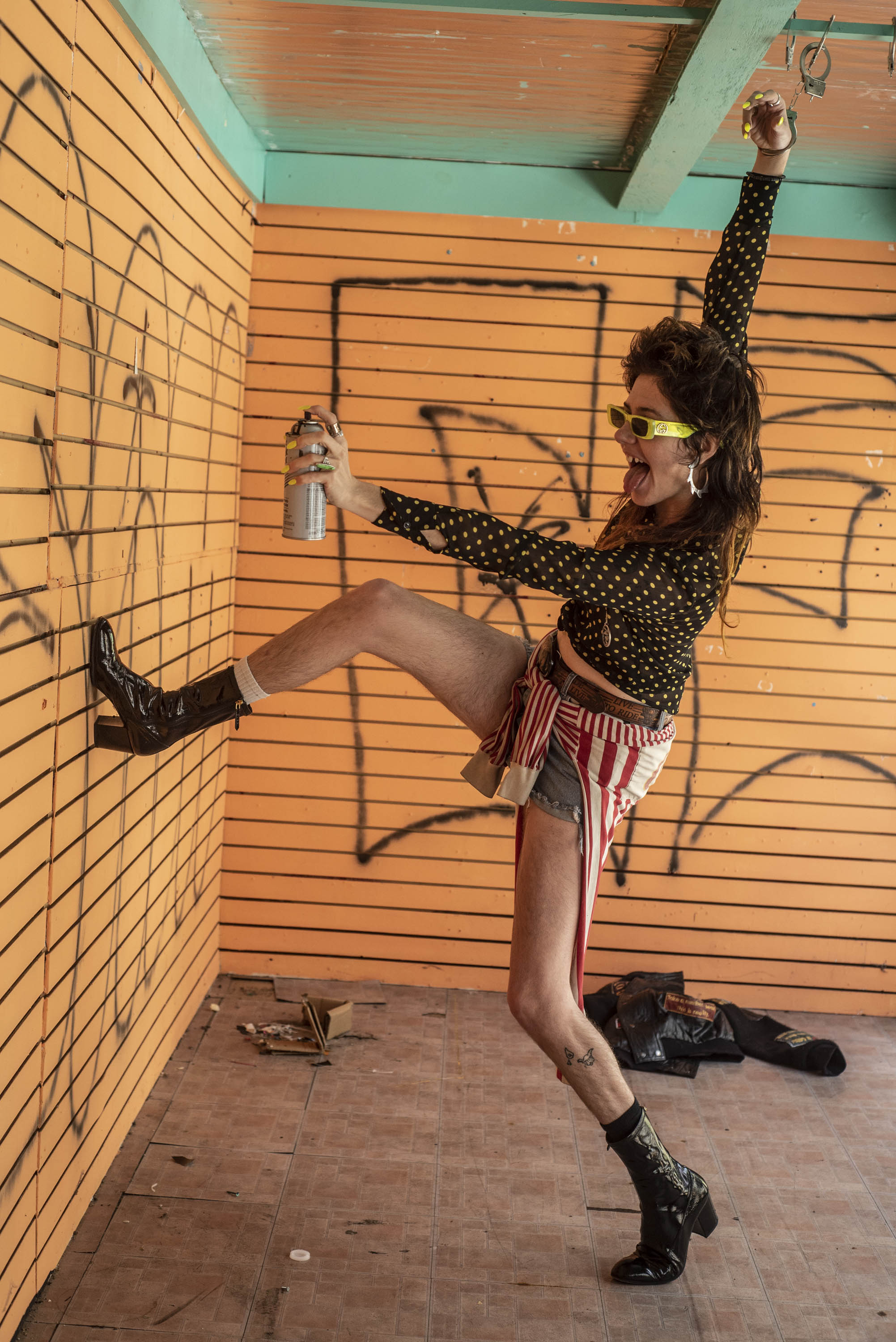 Dani moved to New York in 2014, having secured the chance to develop film and work with director Darren Aronofsky. At a gig one evening, she bumped into a friend of a friend looking for acts to perform at a night she was hosting. Dani didn’t have a band – she’d never even sung on-stage – but the idea seemed so appealing that she blagged a slot and improvised a group from musicians she knew. And just like that, Surfbort was born.

“It was my 21st birthday,” Dani says, recalling that first show. “I’d just got sober, so I drank a Red Bull. One of the songs [we performed] had a Patti Smith-style rant. I started it halfway through and thought, ‘This is the craziest feeling I’ve ever felt in my whole life. This is insane. I’m going to die.’ I basically had a panic attack-slash-psychedelic freakout. After the show, I was like, ‘Wow. I wanna do that every day of my life.’ There was no going back.” 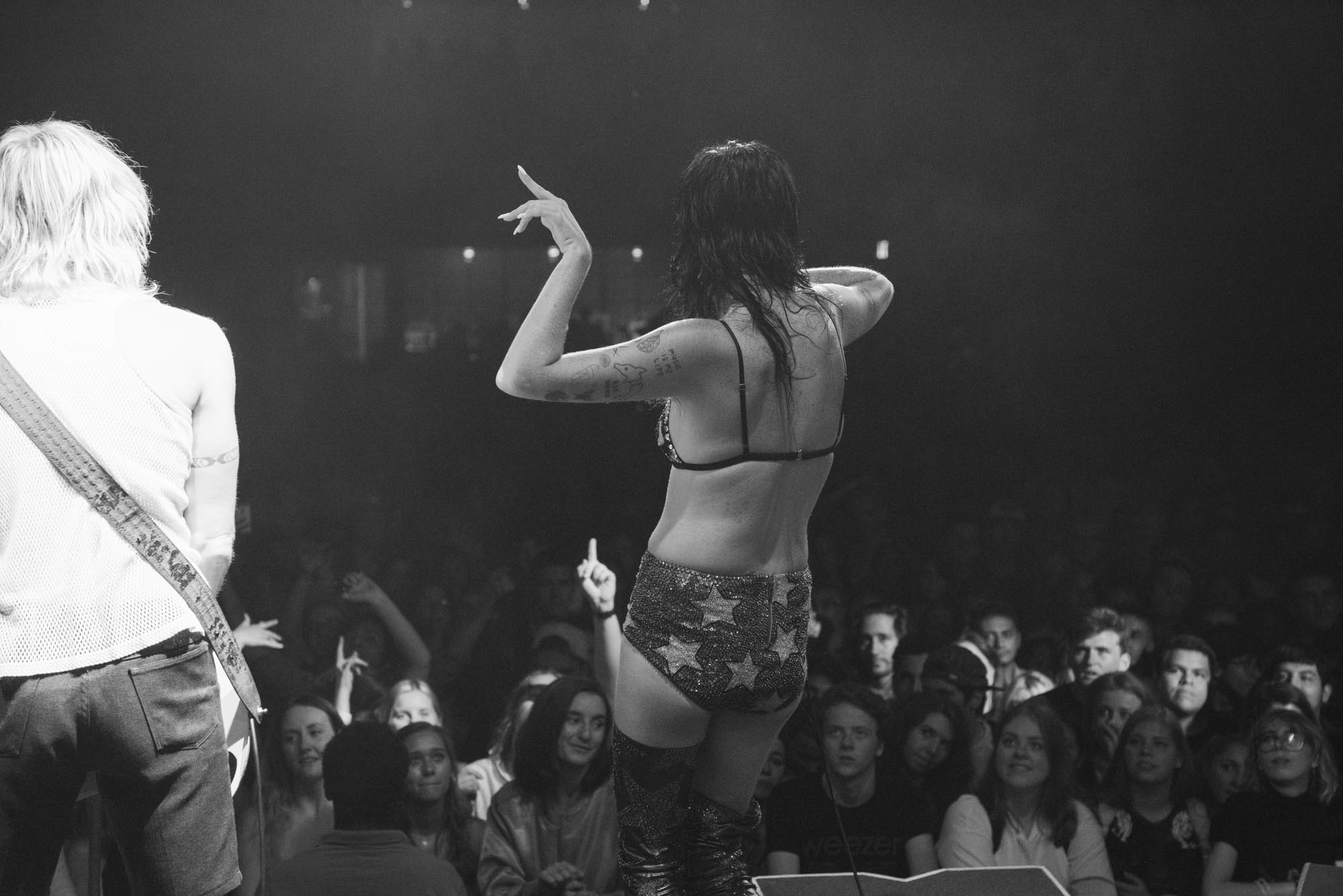 The gigs became more frequent but Dani – only recently clean – found it hard spending time around the more hedonistic members of the band. Personnel, consequently, came and went until the band finally settled on its current lineup: “the reliable shredders.” Finding those elder bandmates brought a wealth of life experience to draw from. With their support and advice, Dani was able to carve out her own space as a performer free of judgement. “They really unleashed me being a clown.”

The humour and irreverence in Dani’s songwriting are what disarm the threat of heavy subjects (anxiety, addiction, unhealthy relationships with social media) that never seem to fully recede. A video for the song ‘Trash’ (from 2018 debut Friendship Music), for instance, sees her carefully rubbing fresh vomit onto the face of Donald Trump before giving him the finger. (“Everything that our government is standing for right now is everything I’m against.”)

That commitment to positivity and healing through humour has won the band some notable admirers, from Debbie Harry to Julian Casablancas (the latter of whom signed them to his label). It has also seen Dani become the face of Gucci Beauty’s first-ever campaign earlier this year, in which she challenges preconceived notions of beauty by showing that it’s okay if you don’t happen to look like everyone else. “Growing up, you watch TV and see the teen magazines and think, ‘Fuck, I’m not right!’ But that’s a lie,” she says.

“It’s way better to be yourself and embrace the crazy, weird things that make you you. When I was in school, I had small tits, orange hair and my teeth had gaps in them. I snorted a lot when I laughed. I did dumb, goofy, nerdy shit. But that’s so sick. Be proud of it.”

Becoming a performer is Dani’s way of giving something back to other outsiders – whether it’s breaking down fears in her songwriting or turning shows into big-hearted get-togethers where everyone feels like they have a stake. “I’m a huge dork – super pure at heart – and I just want people to be happy,” she says, with a giggle. “While we’re all on this trash island planet, we should really fucking love each other more. Simple.” 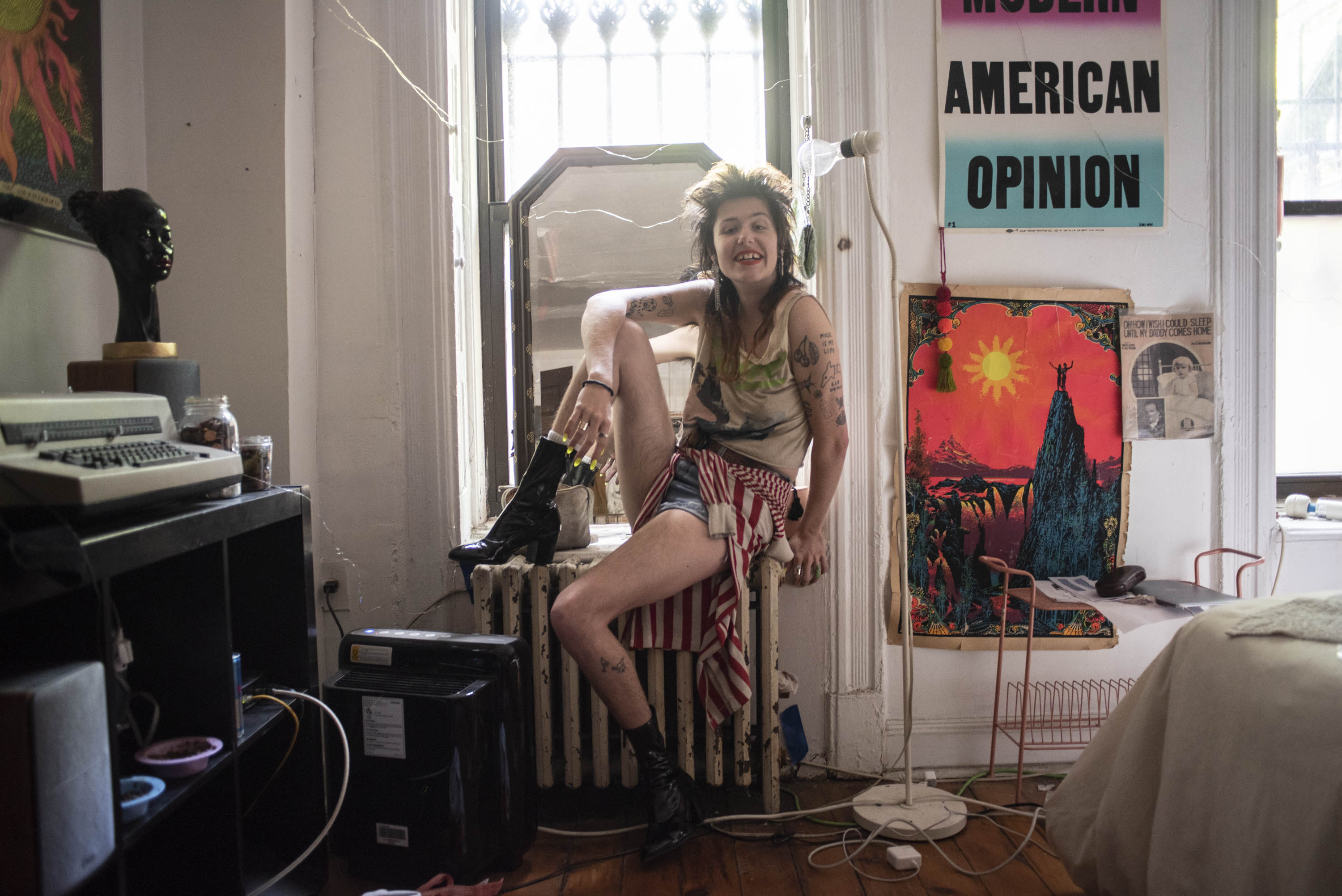 Linkedin
RELATED ARTICLES
OTHER ARTICLES
A group of young Palestinians have found temporary freedom in the act of parkour, reimagining wreckage and ruins as a series of high-octane playgrounds.
Cindy Campbell recounts how her brother ushered in a new era of musical culture at a party she held in the Bronx in ‘70s.
Following the announcement of an 80% hike in the energy price cap from 1st October, crowds gathered outside the offices of energy regulator Ofgem to protest and declare their intention to undertake a payment strike.
Thousands attended the annual event this year to wheelie through the city and call for ‘knives down, bikes up’.
In his 2008 series, the photographer pictured himself as Angela Davis, Martin Luther King Jr., Malcolm X, and other prominent figures.
A 37-year-old woman shares how her abortion led her to become a clinic worker, and the abuse she’s received in that role.