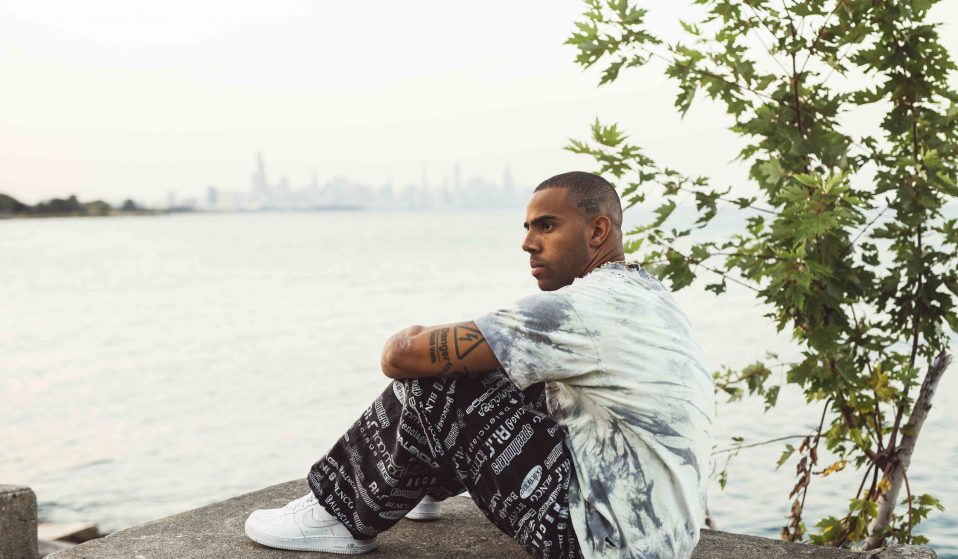 For Mensa, artistry and activism are interlinked: he won’t stop until he’s changed his hometown for the better.

The 27-year-old rapper’s hometown boasts a rich hip hop heritage, but he remains one of its most important sons. For Mensa, artistry and activism are interlinked: he won’t stop until he’s changed Chi City for the better.

Vic Mensa is busy adjusting his camera, trying to get it right. He changes it from mobile to laptop view, the neon blue lights from across the room transforming his hue, before he disappears entirely. After a few seconds, he returns again. “Well, that didn’t change anything,” he says sarcastically, signalling his unhappiness.

This kind of perfectionism shouldn’t come as a surprise to anyone who follows him closely. For the last couple of months, the 27-year-old rapper’s social media output has detailed a rigorous work ethic: his Instagram feed currently serves as a complete visual archive of the creation of V TAPE, his most recent release, alongside strategic teasers of upcoming collaborations yet to see the light of the day. For Mensa, the studio – working, creating – has served as a safe space throughout the COVID-19 pandemic.

But he’s also been learning to live in the moment. Leaning back into the black leather sofa behind him, his white t-shirt instantly contrasting with it, he explains how he owes much of this to The Power Of Now Journal, Eckhart Tolle’s bestselling guide, which argues in favour of a renewed focus on day-to-day living. The Chicago native says he was recently swayed into revisiting the book by a close friend, who’s currently serving a 15-year prison sentence for gun charges. (In the past, Vic has shared his thoughts on the sentence in relation to the crime at hand – which saw James shoot someone in the leg. We don’t touch on it today.) 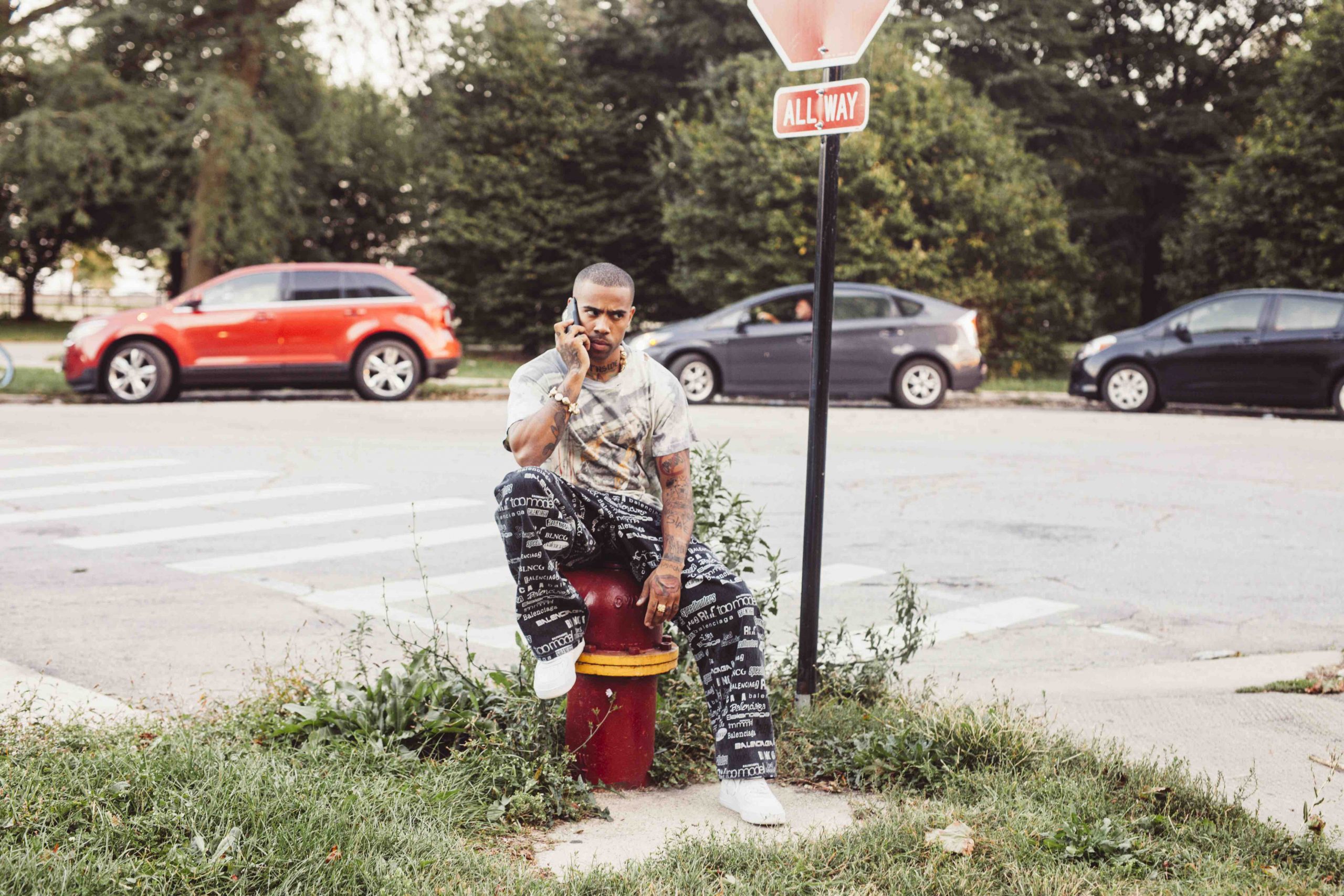 “Seeing his optimism, considering his current life circumstances, makes me see the world in a different way,” Mensa says, ironically still in a studio in his hometown, now more comfortable with the camera quality. “Recently, I sent him [The Power Of Now] and he asked me later on if I’d read it all. When I said I hadn’t, he told me to go and finish it. It’s really shifted my perspective.”

Mensa has always kept an open mind – particularly in regards to his own mental health. He started meditating at around 16 years old, during high school. A year or so earlier, he began seeing a psychiatrist and was prescribed antidepressants. Throughout his subsequent career, he has regularly used his platform to speak out on these issues: during a 2017 appearance on Larry King, he explained how the subject of mental health remains taboo among Black men. “It’s so important to put it on wax now, man – to talk about things. Because you never know who might be going through a similar pain.”

For Mensa, who has struggled with anxiety throughout his life, the most recent challenge has been learning to manage his long-running fixation with time. “Just before this interview I looked at the date. I would usually go through the motions of, ‘Oh, shit it’s September 28th, the year’s almost over, I haven’t done enough.’ But now, I can deal with that.”

It’s this kind of openness, paired with an inherent curiosity, that best defines Mensa. When he was a kid, he listened to classical rock with his mother, diving into everything from Nirvana to Guns N’ Roses and Rage Against the Machine – who he still enjoys today. But these sounds were superseded by the depths of Afrobeat, with the godfather, Fela Kuti, topping his list of early inspirations. This makes sense, given Mensa’s ancestry: he was born Victor Kwesi Mensah, the nephew of early Highlife architect Chief Kofi Sammy. “He knew Fela and all the greats of that time. I often get told I look exactly like him.” 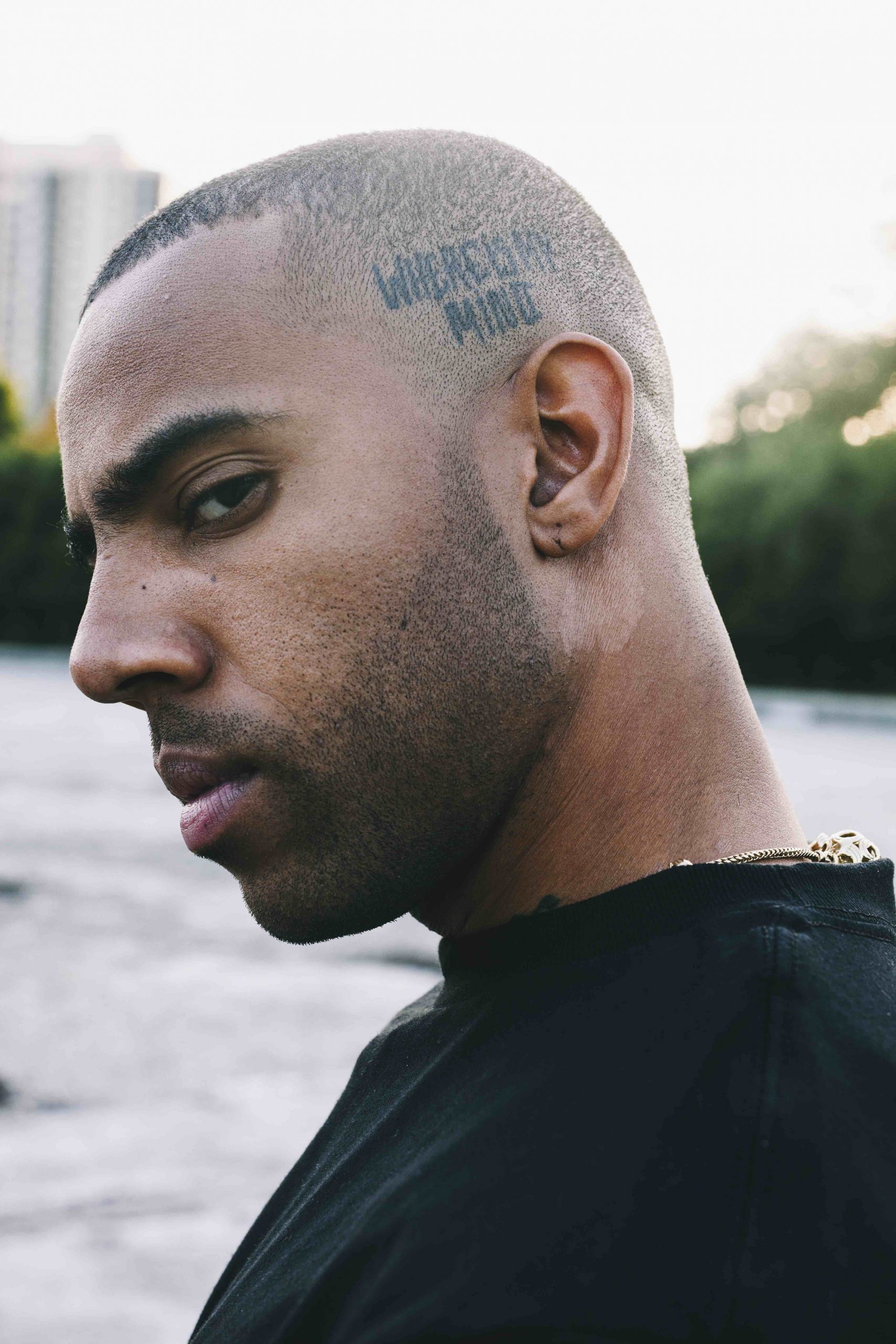 This receptiveness to different ideas was key to his ascent as an artist. In 2009, as a teen, Mensa helped co-found the experimental Chicago eight-piece Kids These Days. The band’s hybrid sound saw his cathartic lyrics stowed among rock and jazz-inspired productions, placing them at the forefront of an early renaissance in the underground Chicago scene. At the same time, he befriended fellow Chicagoan, Chance the Rapper. The pair attended Whitney M. Young Magnet High School together, before combining to launch Savemoney – a collective, consisting of some of the city’s most exciting young artists, whose sound was more traditionally rooted in hip hop. It was at this moment that Mensa’s various musical words began to collide.

“Together, we all turned our school and the other public schools into our first fanbases,” he remembers. “One week, Chance might have a CD and we’d all come together to sell that, then we’d pull up to other schools to sell tickets [to shows]. We did shows all together.” At 16, they were masters of grassroots organising, comfortably selling out 1500 capacity venues across the Illinois region. “All the gang would come together. We’d throw up the Savemoney handshake [at shows] and mix it up with the Kids These Days one straight after. [That period] taught me how to hustle music.”

While Savemoney remained together, Kids These Days split in 2013, four years after their inception. In the past, Vic has stated that while he never initiated discussions to disband the group, it happened amicably when it was brought to the table. Still, the process left him feeling jaded. His debut solo release, Innanetape, arrived months after the group called it a day. “You know, that tape, it came from frustrations about the group disbanding. I’d invested a lot of time there and I felt slighted because it didn’t work out. I actually felt a lot.”

He admits that he felt isolated. “I was quite alone… I was actually suicidal throughout,” he reveals. He is quick to point out the track ‘Orange Soda’ as a remedial part of that period. “I was telling myself exactly what I needed to hear,” he adds. Revisiting the song’s lyrics today – ‘Cause baby you are (So amazing) yes are, yes you are’ – it’s clear that he’s attempting to nurse himself out of some kind of trauma. He says that this kind of musical approach, pairing darker messages with uplifting sentiments, was something he learned from listening to his uncle and wider Ghanian artists.

Mensa has taken this sentiment – of tackling traumas – into all of his projects succeeding Innanetape. It’s become automatic and expected when pressing play. One of the demons he’s had to overcome has been drug-use, which, again, he’s entirely transparent about throughout our conversation. The entirety of Innanetape, for instance, was recorded under the influence of psilocybin mushrooms, which he says allowed him to temporarily escape from reality. But his relationship with drugs was at one point cyclical: ‘Rollin’ Like A Stoner’, a track from his 2017 album The Autobiography, candidly referenced the sheer extent of his hedonism. It saw the Chicagoan at his most transparent and vulnerable. “It was easy to tell the unbridled truth,” he says. “It’s never difficult to be that personal – that’s the goal.”

It’s easy to see how Mensa’s commitment to the truth would lead him into the sphere of activism. On his 2016 Roc Nation debut There’s a Lot Going On, he dedicated the song ‘16 Shots’ to Laquan McDonald, a Black man who was shot and killed by the Chicago Police Department two years prior. (Jason Van Dyke, the officer responsible, was later charged with second-degree murder, as well as 16 counts of aggravated battery with a firearm.) 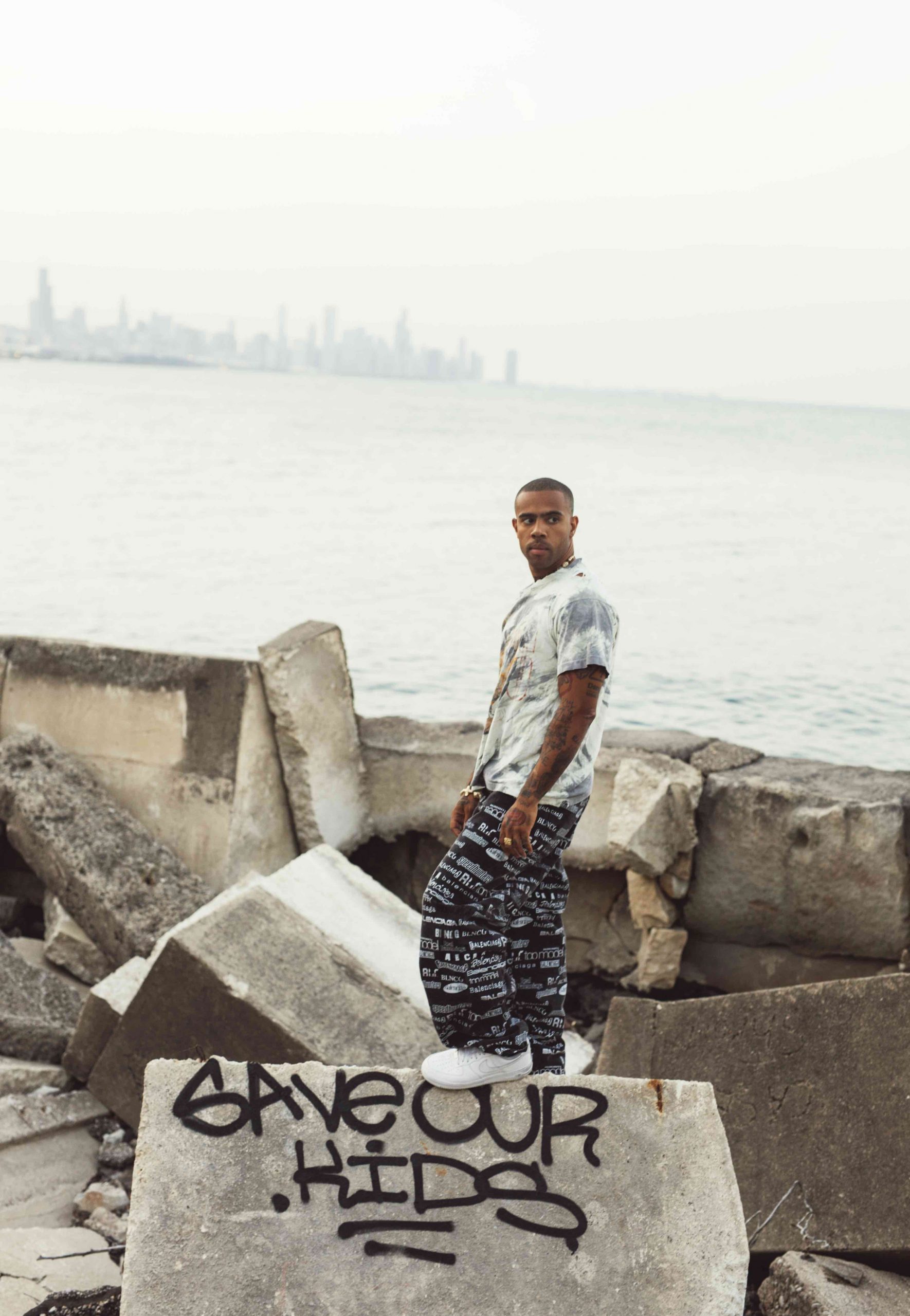 He is a regular fixture at protests in the city, too, and has attended numerous marches and meet-ups for a plethora of issues – from Black Lives Matter to immigration. His political beliefs stem from late adolescence, when he began immersing himself in the works of Malcolm X and Huey Newton. “I got my first tattoo. It’s a Black Panther with ‘Free Huey’ on it. The ‘revolutionary’ thought started early for me,” he says, laughing.

In 2018, he took that commitment one step further, by launching his own non-profit organisation, SaveMoneySaveLife. The foundation, based in Chicago, aims to train first responders in the city’s most dangerous neighbourhoods, as well as making educational tools – including stationary, books and other materials – more accessible to Black and indigenous communities. “To be an activist is to be active, and I am definitely active in this day and age,” he says. “We can’t afford to be stagnant.”

SaveMoneySaveLife continues to work on both singular and larger issues enriching the city and its citizens at large. Currently, Mensa is working on the second phase of his ‘anti-bait truck’ – an initiative which pushes back on local police’s tactics to try and lure Chicagoans into arrest. The organisation also routinely provides shoes to the Englewood community, which has a poverty rate of over 46 per cent according to a 2008 – 2012 census. “We’ve given away around 50,000 shoes. This year we’re partnering with a Chicago artist to create shoes too.”

As far as  Mensa is concerned, artistry and activism are interrelated worlds. It’s something that has been married to his music, but fundamentally transcends it. “[Activism] is not really that different. I use my music to push forward ideas and messages that I’ve learned and feel other people should hear – that’s the same thing we really do as a foundation. If my purpose is to be a truth-teller, then the foundation, my existence there, is putting that truth into action. The next step is to change the way things work in Chicago – positively.”

In 2020, he is a remarkable example of evolution and transparency – something which comes directly from his extreme life experiences. “I’ve seen it all go up and I’ve seen it all go down,” he continues, reflecting on his journey – both inside and outside of the music business. “There’s shit that everybody sees… the real-life stuff in the streets that goes on.”

For now, though, he plans to continue basking in the celebrations of V TAPE. There’s new music coming, too. More importantly, though, Mensa will continue to be real about everything that he’s going through. He sees himself as a man who has shed his skin and all his past traumas. But that doesn’t mean he’ll stop reflecting, or telling the truth as he sees it. “I’m trying to be right here, right now,” he says. “In the present, remaining accountable for that.” 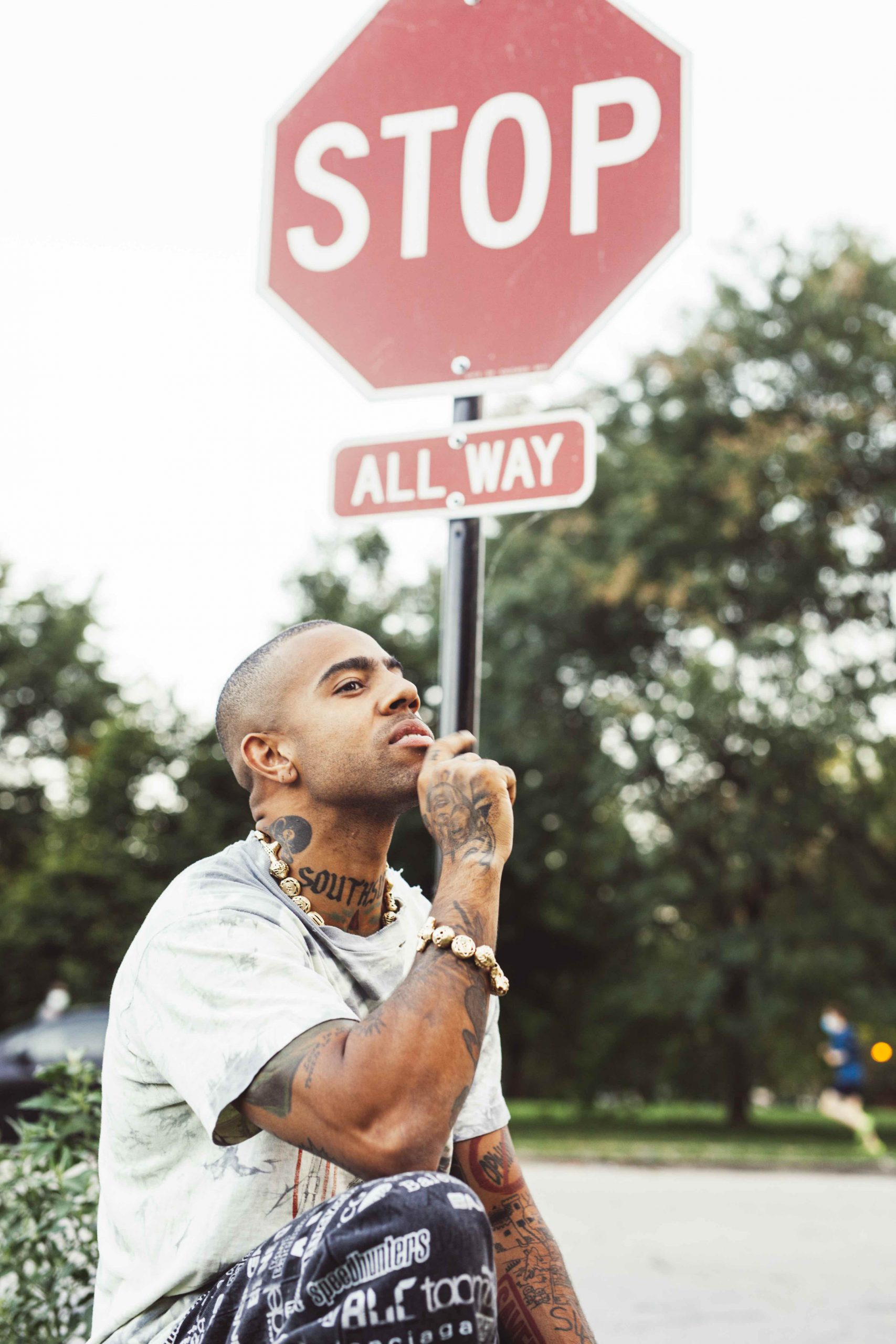 V Tape is out now on Roc Nation records.

Linkedin
RELATED ARTICLES
OTHER ARTICLES
This year, we spotlight the inspiring individuals and activist groups who have been on the frontlines of the fight for a better future.
Formed as Black Lives Matter protests swept the globe, Color The Water is out to reclaim Californian surf culture – one wave at a time.
Photographer Amani Willett discusses his new book exploring the Black experience of driving in America, and how adventure has long been underpinned by fear.
People of colour get little representation in outdoor culture. But Black Trail Runners aims to change that.
A new podcast seeks to uncover the truth behind the mysterious lynching of a Montana unionist in 1917 and the cataclysmic rise and fall of his hometown of Butte.
We recall month by month what has been a tumultuous year in the fight for social justice.