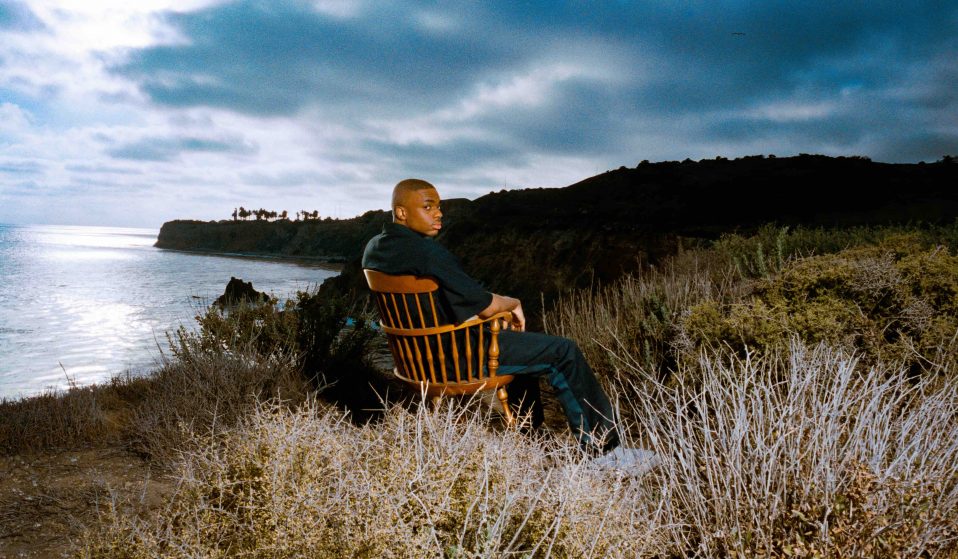 With his new album, the Long Beach rapper has constructed a swelling commentary on adolescence and upbringing – of which there are no easy answers.

With his new self-titled album, the Long Beach rapper has constructed a swelling commentary on adolescence and upbringing. Just don’t expect him to tell you what the message is.

Vince Staples possesses a humility which prevents him from thinking too deeply about what he does. I’m speaking to him over Zoom – he’s calling from his home in Southern California – where we’ve come to discuss his new album, Vince Staples. It’ll be his first release in around three years since 2018’s FM!, and was constructed over the course of a few weeks around Thanksgiving 2020 with help of producer Kenny Beats. Surprisingly, he has little to offer on what inspired the project. “There was nothing too in-depth at that point,” he says. “I just had something I wanted to share, something I felt should be present.”

Now freshly 28 years old (it’d been his birthday in the days prior to our conversation), it’ll be almost six years since the artist first shared his thoughts with Huck, where he discussed his debut album, Summertime ’06. Though that project established him on the scene as a sharp entertainer with a penchant for nihilism and clever wordplay, he’s had a wealth of impressive releases in the years in between, ranging from the genre-bending Big Fish Theory to the unsettling Prima Donna short film. 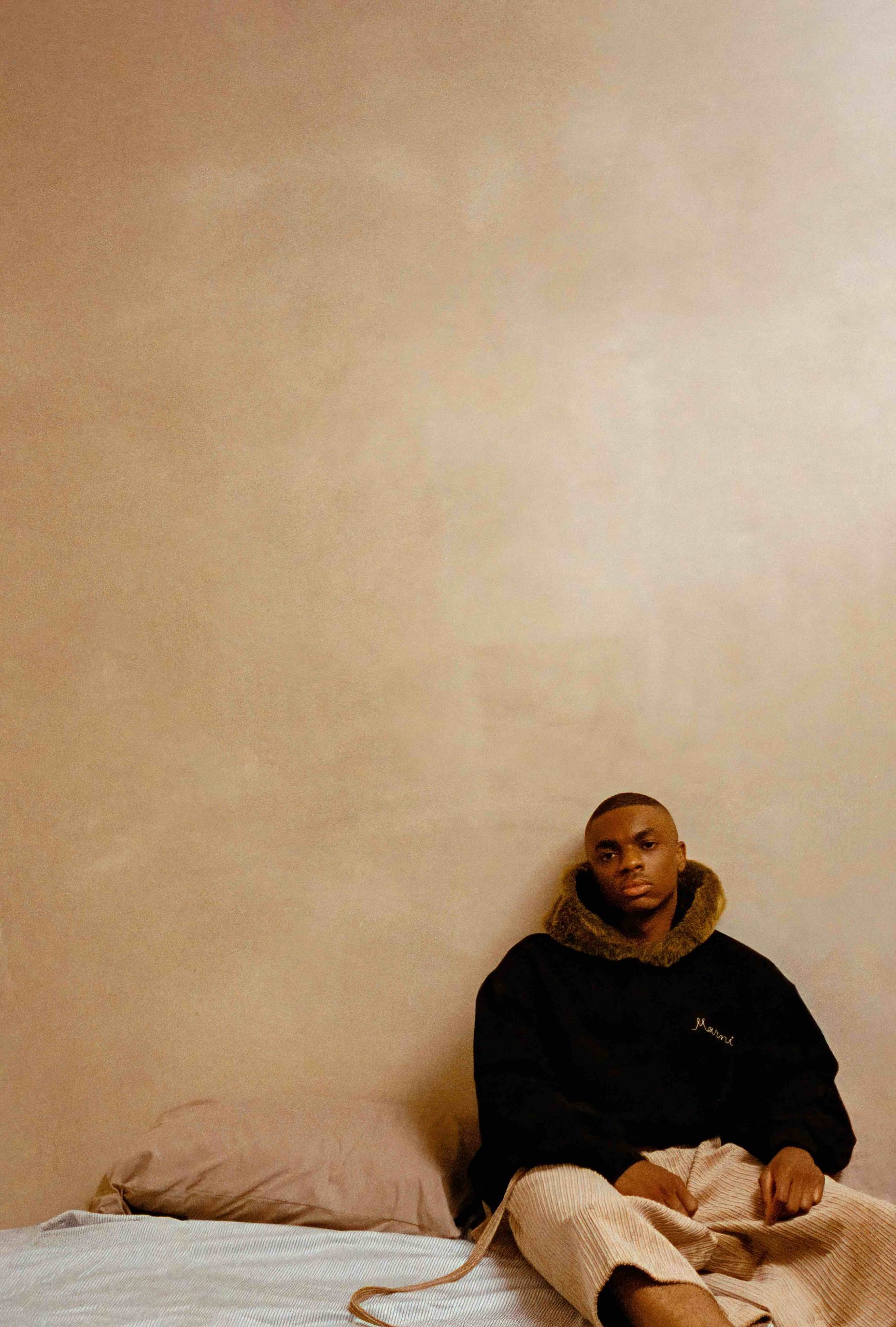 It seems he’s also changed a lot in demeanour since then. Rather than the spirited commentator who talked at length about the problem of rap culture and the golden era of hip hop, I’m met with an essentially private individual who gives little away. It’s best summarised when I press him about the naming of the release we’ve come to talk about. Eponymous projects, I point out, usually tend to be the first in an artists’ catalogue. “To me, they’re just names,” he replies.

Staples speaks rapidly, matter-of-factly, and often avoids specifics about his own work (whether intentionally or not), seemingly pressed by an urge to philosophise on things outside of his own artistry. “Like, what is an album anyway? Everything’s for sale, so is an EP an album? Is a mixtape an album? Everything’s an album essentially, especially in today’s day and age,” he says, before finally offering a diplomatic response to my original question. “It just fit the body of work, you know?”

The music is where his thought processes and motivations are most present. Vince Staples is a swelling, lyrically emotive project that pulls from youthhood experiences and a turbulent background to shine a light on who he is as a person. Lyrically, there’s a consistent melancholy to his tales on the record; being involved in Crip gang culture during his younger years, he’s open about the strife and resounding impact years after leaving that way of life. In a way, he still has one foot in; tracks like ‘Sundown Town’ detail losing friends both to gun violence and incarceration, and talks of a continued discomfort in meeting new people due to his former experiences. There’s also snippet insights into his family and upbringing; ‘The Apple and The Tree’ features a phone call he had with his mother where she reflects on how she’s dealt with conflict in the past. It came from an unplanned recording the artist had held on to for over a year before releasing, mainly recorded out of efforts to document stories that detail his “upbringing and environment”.

Born in Compton and raised in Long Beach, L.A., Staples grew up with his mother as the youngest of five siblings. Speaking to him, it’s clear that he views his hometown fondly. “I’m a really big Southern California fan. It’s a very unique place as far as its geography, the kind of people who are here, and how they got here,” he says. That love is weaved into the record by way of references to the streets where he grew up and areas familiar to him, places like Cherry Avenue and Downey Avenue now immortalised via the refrain of ‘Law of Averages’. “It’s a metaphor for boundaries and things of that nature,” he explains of the references to those areas. “Those are the borders of my neighbourhood, that’s where I grew up. So it holds symbolism for me.”

With his frank discussions on gang life and brushes with violence, he’s spent time in other interviews lamenting being pigeonholed as a “gangsta rapper”, and equally, as the conscious type who serves as foil to the former. But the tales aren’t intended to fit any of those labels, he says, rather they’re about allowing people to hear what he’s been through, and to learn from it. “There are a lot of things in music that people can take from,” he says. “I have things that everyone can take from as far as the gang stuff, and expanding on what that means to me and what I’ve experienced. People can take it as entertainment, can take it as a learning experience, but I don’t feel uncomfortable telling people who I am if they don’t relate to it.” 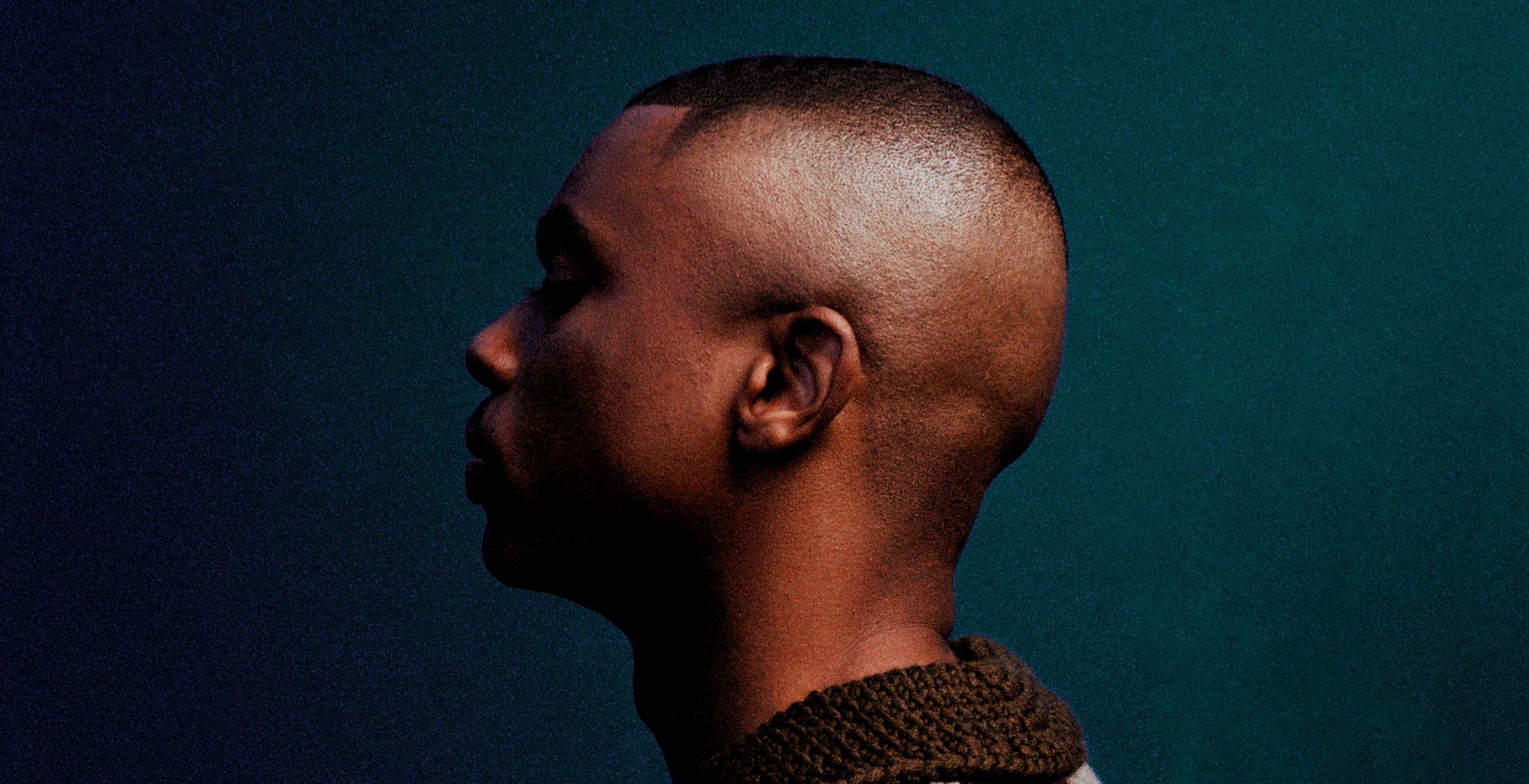 Despite the openness he’s showing at this point in his life, it’s not necessarily a case of the artist becoming more vulnerable with age, he says. That complexity has continuously peppered his work, it’s more a case of people being yet to pay attention to it. “The vulnerability and the commentary has always been there,” he says with slight frustration. “I put out Shyne Coldchain Vol.1 in 2011, I had songs on there like ‘Trigga Witta Heart’,” songs that speak on racism, social concepts, miseducation, gentrification, all of these things, and it was 10 years ago – it’s just that 10 years ago, no one wanted to hear it. These things are there if you want to see them.”

Nowadays, it’s a case of approaching things differently to get such points across. He’s becoming careful with the words he uses in conversation as well the ones he uses in his music and, as he’s matured over the years, has changed his views on how best to share his message with people. “Just being 28 now, versus being 17, 18, 19, 20 years old, it’s a big difference. I just learned about framework. You can say things all day but if it doesn’t match the production, tone, tempo or tone of voice, then you’re not really getting the correct message across. Like I said, I feel like these things were always there, but it’s just the way in which they were said, and the things that surrounded the message. At this point, the message is at the forefront.”

So, what is the message? He’s reluctant to identify a particular mission with the project, but at this point in our conversation I understand that’s to be expected. Staples is not interested in handholding listeners through his intentions, nor even me when I press him for meaning. Rather, he’s open to all interpretations and doesn’t want to colour the listeners’ mind. “To me, it depends who [is] listening – it’s for the listener to figure out,” he responds. “I don’t try to tell anyone what the goal was because I would like people to have their own interpretation of what was being created.”

It’s an openness offset by an urgency to see the bigger picture, it seems. Staples is someone who’s used music as a way out of the darker points of life he talks about on his songs, and as a valuable springboard to help himself, his family and people in his community. During our time, it’s evident that his music is never just about talking through his own experiences, but as a means to affect others, whether materially or mentally. “Success is me being able to change my environment, change my mindset and be able to be who I am today and become a better person – to not have to do the things I thought I had to do when I was younger. So I’m already successful. I changed my mindset, [and the mindsets] of a lot of my friends in my community and family members. Nothing that I get from [music] can mean more than that.”

For that reason alone, one would think Staples should naturally admire the work he’s done so far, or at least have more to say about it. But his humility appears to prevent that. When I ask what he would like people to know about him as an individual, the usually straight-to-the-point musician pauses thoughtfully. “I mean… that’s a good question,” he says. “I don’t know to be honest. I’m still trying to figure that part out.” 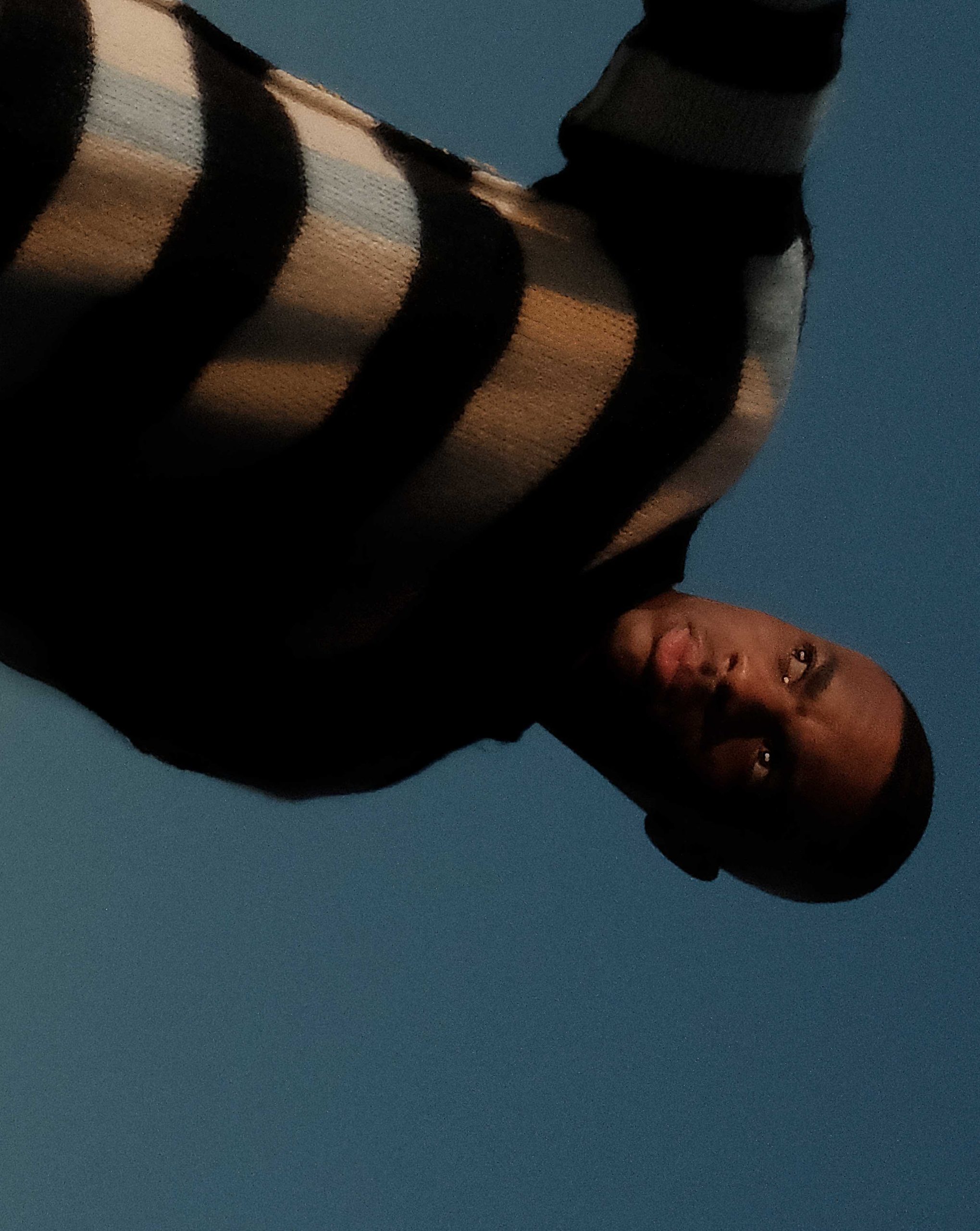 Vince Staples is out now on Motown Records and Blacksmith.

Linkedin
RELATED ARTICLES
OTHER ARTICLES
Sean Maung’s photos are a love letter to the Black and brown communities that make up New York.
The idea that a younger generation is abandoning work has become a popular narrative online, but it doesn’t necessarily reflect reality.
Cindy Campbell recounts how her brother ushered in a new era of musical culture at a party she held in the Bronx in ‘70s.
Yesterday thousands gathered outside Buckingham Palace after news of the Queen’s death broke.
Photographer David Corio’s archive offers a glimpse inside a revolutionary era of music and nightlife.
As the Scottish government announces a rent freeze, an activist with Living Rent who fought and won shares how they did it, and what must come next.