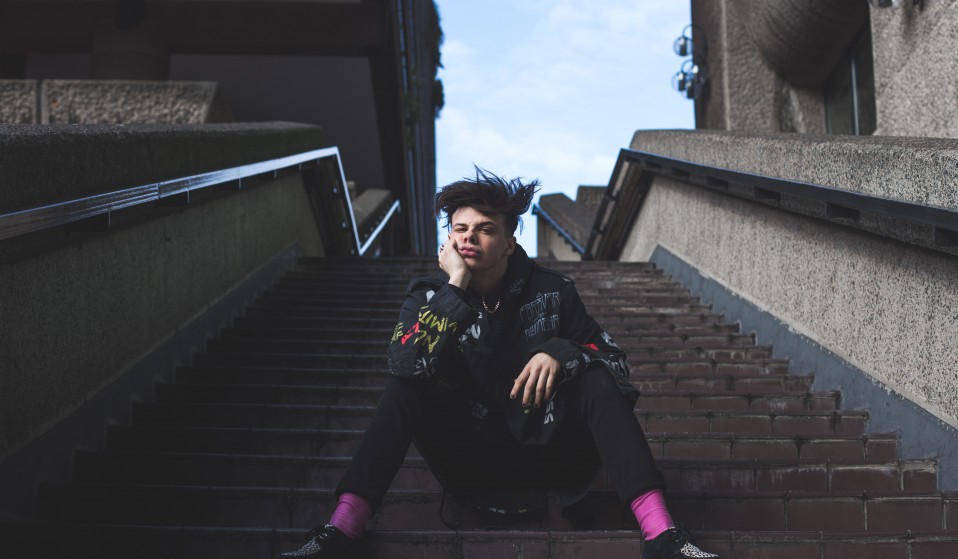 Dominic Harrison was fed up of being ignored, so he started shouting. Now, following the release of his self-titled debut EP, the 20-year-old musician has no plans to down the volume.

Dominic Harrison was fed up of being ignored, so he started shouting. Now, following the release of his self-titled debut EP, the 20-year-old musician has no plans to down the volume.

“What’s popping?” calls Yungblud, bounding in out of the cold like an excitable puppy. “So sorry I’m late.”

The 20-year-old musician (real name Dominic Harrison) was supposed to arrive at London’s Barbican Centre an hour ago. However on this occasion, the weather – an angry blast of wind and snow – had alternative plans. As he fixes his floppy undercut, he apologises for a second time, articulating the kind of sincerity that only a Northern accent can summon. “I ended up stuck on the quiet coach on my train down here – fucking hated it, man.”

It’s easy to see why he’d find the silence difficult. Harrison, forever grinning, has an awful lot to say and, by his own admission, doesn’t really cope well with sitting still. Dressed entirely in black (bar a gold chain and pair of bright pink socks), he speaks with the urgency of someone fearing imminent cut-off. Every sentence is blurted out without breath, delivered as if it could be his last.

There’s reason for it, too. Born and raised in Doncaster, the young artist grew up feeling a certain disassociation with the world around him. While his parents gave their son and his two younger sisters the freedom to explore whatever they saw fit, outside of the family home was a different story. 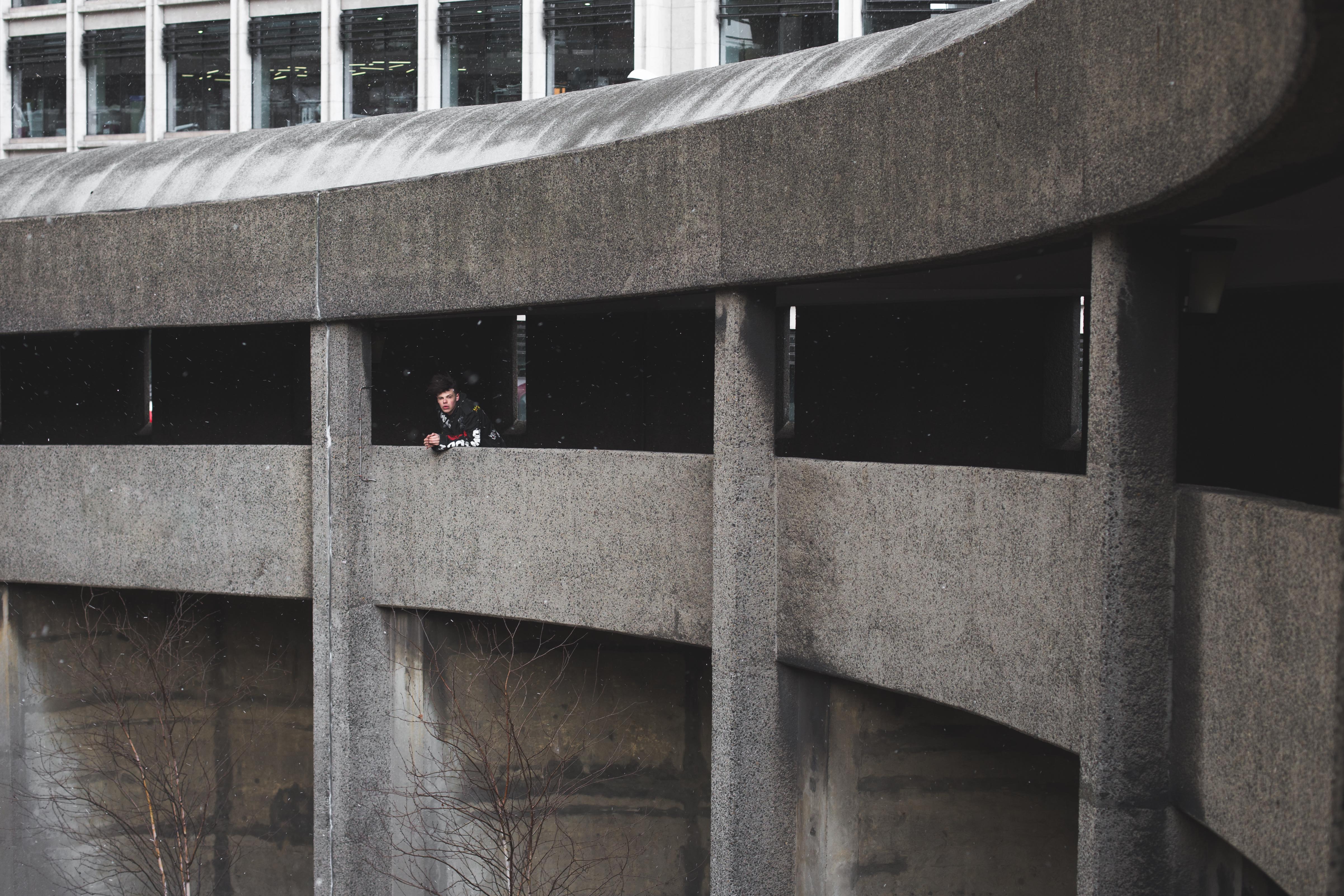 “I felt very misunderstood growing up, people either loved me or they hated me,” he explains, nestled in the corner of one of the building’s coffee shops.

“I’ve got ADHD, so I’ve just always been very loud and opinionated and fidgety. The other mums didn’t really like me much. It was always like, ‘don’t hang round that Dominic Harrison, he’ll lead you astray’ – just because I expressed myself in a slightly different way.”

At 16, he left home and moved to London to take up a place at art school, though its insistence on rules and tradition did little to solve his feelings of alienation. Plus, as one of very few Northerners, he felt more alone than ever.

Growing up, Harrison had been surrounded by music – dad owned a guitar shop, while grandad was a piano and bass player who once shared a stage with T-Rex – but it was at this point in his life that songwriting began to take on a new kind of significance. After leaving art school (“I moved out of there, bruv”) he began sharing songs online, in between working shifts at a pub in the city. 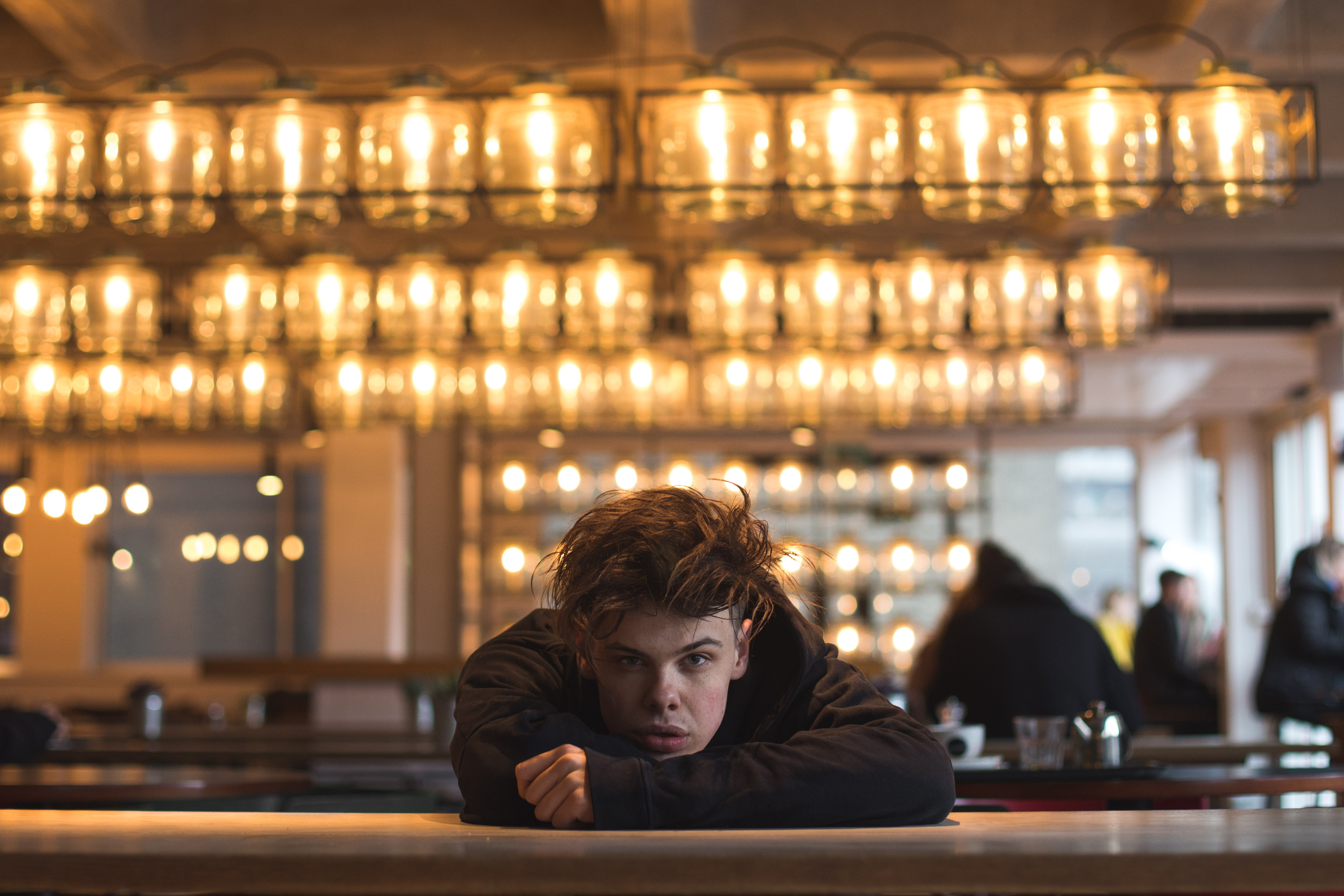 Soon, the music that the young dropout was sticking online began to gain a bit of traction. Before he had time to sit back and take in what was really happening, it had already happened, and Harrison (still just 16 years old at the time) was offered a management deal.

Thrust into a world he didn’t really understand, he quickly found himself swept away. “I got completely lost. I was being put in five different sessions a week, with five different producers who were all giving me five different opinions on what I should be.”

In short: the deal fell through, and the young artist was back at square one. It was at this point that everything Harrison had felt growing up – isolation, otherness, disenchantment – “bubbled up into one simmering pan” and began to really manifest itself in his writing. And, just like that, Yungblud was born. 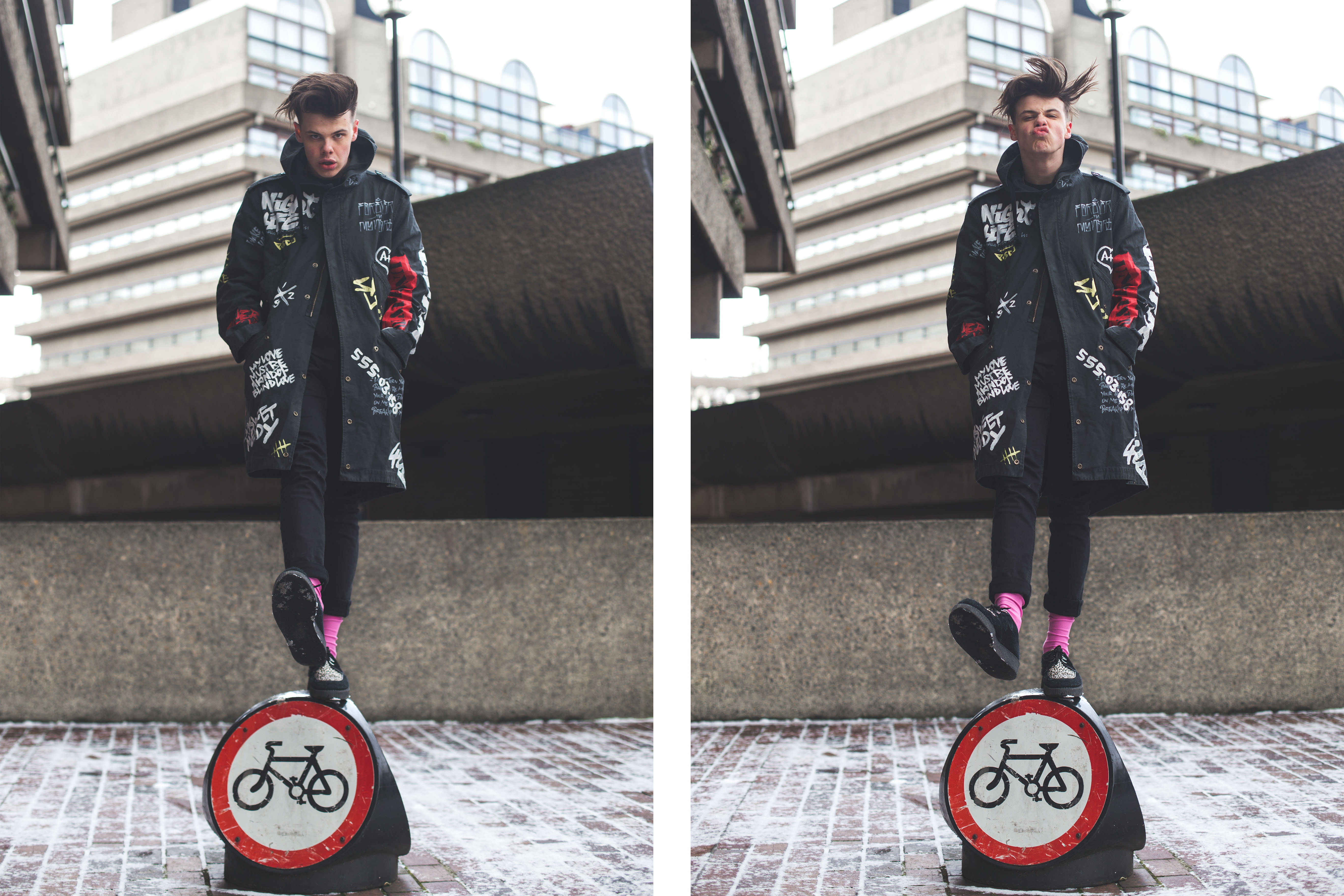 “I think the core of what I’m talking about in my music comes from that, feeling misunderstood,” he says, taking a break from excitable gesticulation to fiddle with one of his rings.

“So I went back to basics. I went back to the songs I’d always been listening to – NWA, The Clash, The Jam, stuff like that – and just started writing. I’ve just been on a rampage and I’ve not stopped since.”

To understand Yungblud’s music, one first has to understand him. His songs, raucously belted out into a space that sits somewhere between pop, punk, hip-hop and garage rock, are a chaotic mishmash of thoughts and ideas. Much like when he’s speaking, it’s as if he’s trying to cram as much in as humanly possible, all while flipping a V to those in the past that have told him he can’t say – or do –certain things. 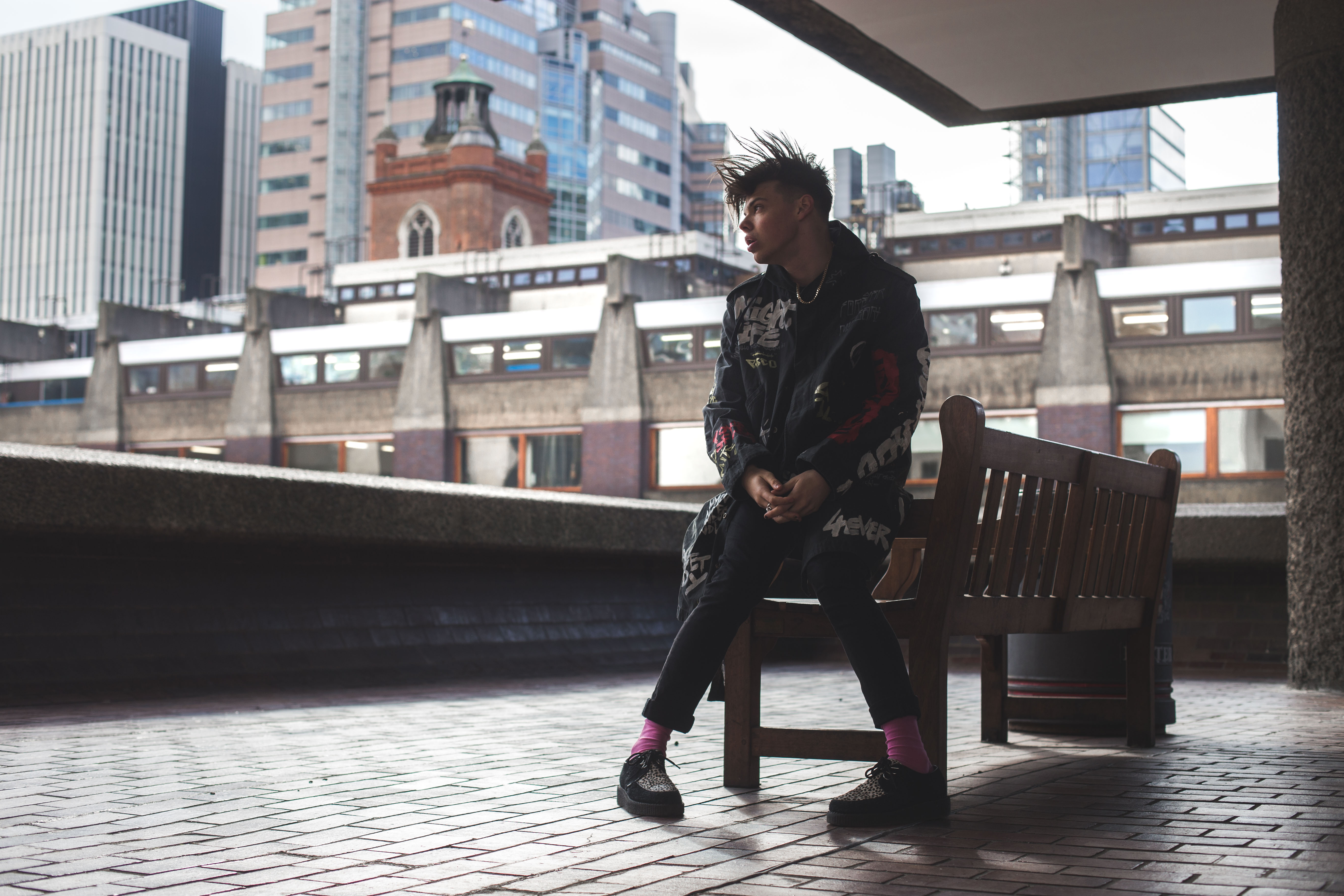 Take his self-titled debut EP, released at the beginning of 2018. In five songs (and fifteen minutes), Harrison takes on student loans, city gentrification, toxic masculinity and sexual assault. In such a short space of time, there’s an awful lot to unpack.

As an embodiment of youthful discontent, his gripes are genuine ones, articulated without an ulterior motive. Though you’re free to question the execution (the ideas don’t always match up to the end product), the sincerity is definitely there.

“Right now, it’s such a confusing place for young people. It’s a mental world. We are such a clued up, clever generation. We understand what we want. But it’s almost being held back by a generation that isn’t necessarily ready for the world to go in the way we want it to – or don’t quite understand us.” 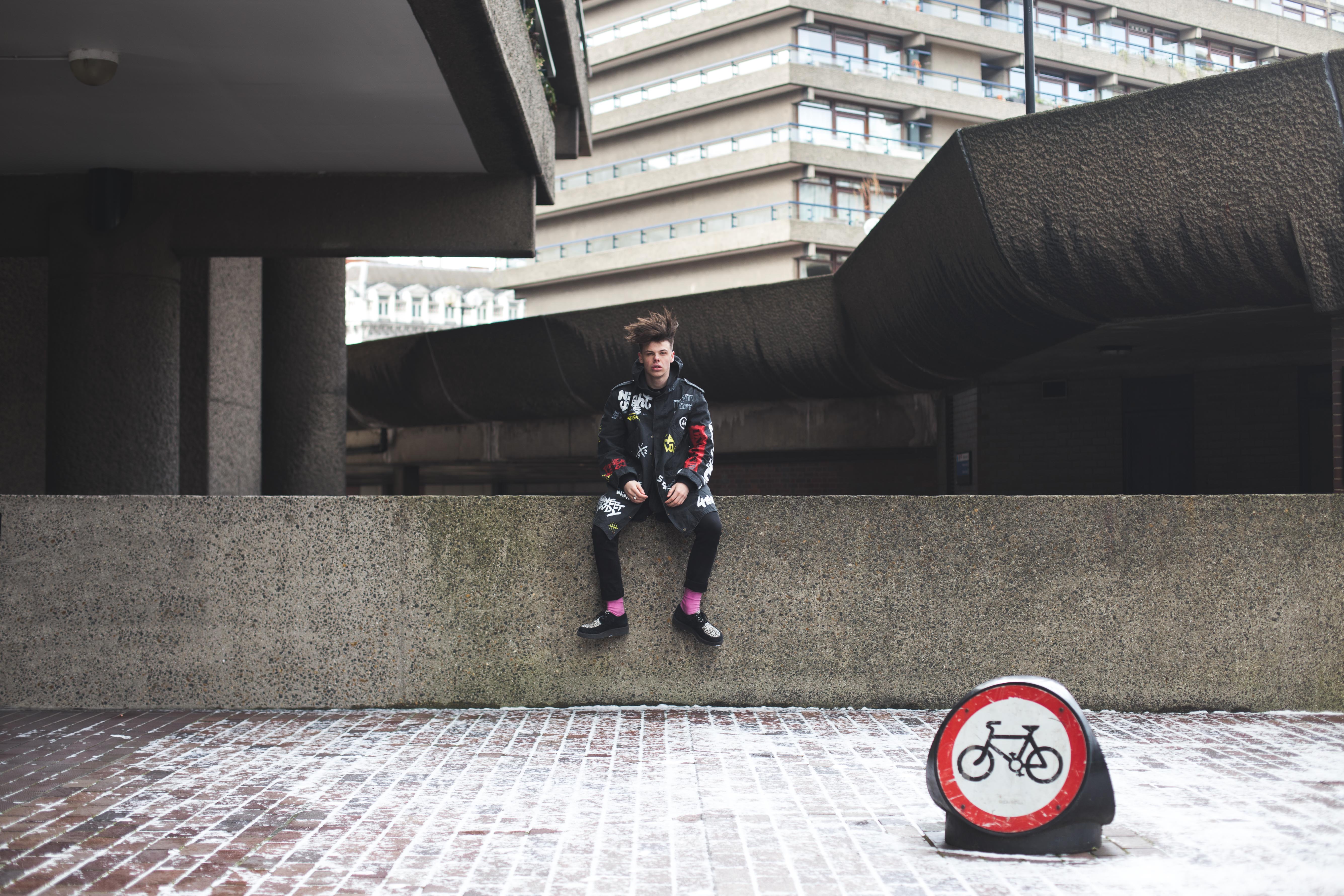 “All my life, I felt like I wasn’t listened to. Then, I turned 18 and I had a fundamental chance to vote – on Brexit. It was like, ‘right, now I have my say’, you know? But then again I felt totally robbed. Everything came together as a catalyst. Now, I’m just saying what I think.”

And for those who would question the authenticity? “At the end of the day man, let them,” he says. “I don’t care. I haven’t got all the answers or anything like that, I’m just talking about what I’ve seen. People are gonna [question] that, so let them come, let them do that. I relish that kinda thing. If you have a conversation with me, you’ll know I’m real. It’s easier to turn your nose up at something than embrace it.”

For Harrison, being Yungblud is about being heard. It’s about making sure that other young people hear him, too. While the success – sales, streams, publicity – is amazing, it pales in comparison to the connection he has with kids all over the world. He says that fans have started sending him messages on social media, telling him that his lyrics are helping them come to terms with the perils of growing up (“and that blows my fucking mind more than anything. It’s exactly what I do it for”).

For someone who felt boxed in and alone, the world is beginning to seem like a pretty small place. He smiles when he considers this, ruffling his hair before finishing the cup of tea he’s been nursing for the past half an hour.

“Kids are kids no matter where they are. In England, Denmark, Slovakia, Malaysia… whatever. Kids are kids. We’re all feeling the same.”

YUNGBLUD – EP is out now.

Linkedin
RELATED ARTICLES
OTHER ARTICLES
A group of Ukrainians living in Poland are helping Ukraine withstand Russia’s brutal invasion by buying supplies and shipping them directly to the war’s frontlines.
Following the release of his newly republished 1991 book, Redheads, the American photographer reflects on his celebration of ginger people and their magnetic power.
Members of the collective share some of their reasons to run as part of #UnitedBySummits, a campaign that looks to uncover transformative power of the outdoors.
The situation in Afghanistan remains dire, with many groups facing persecution at the hands of the Taliban.
The government’s failure to take long Covid seriously has led to the formation of a group campaigning for the thousands of forgotten victims of the illness.
Our new magazine is here, starring the inimitable Mitski. Order your copy now and join us on a trip around the world.