Dig! and We Live in Public director Ondi Timoner is drawn to visionaries - but why do they keep trying to sabotage her films?

Dig! and We Live in Public director Ondi Timoner is drawn to visionaries. But like Brian Jonestown Massacre frontman Anton Newcombe and infamous internet pioneer Josh Harris before him, Russell Brand is attempting to sabotage her portrayal of him, Brand: A Second Coming.

When Ondi Timoner’s new documentary Brand: A Second Coming had its UK premiere at the London Film Festival on Thursday evening, Russell Brand was nowhere to be seen. The director discovered that her star had been calling people involved in the film – including his mother, father and Noel Gallagher – to persuade them not to attend. Surprising, perhaps, for a film Brand funded, but it’s not the first time Timoner has been jilted at the red carpet (or the first time her film has been sabotaged) by its brilliant yet volatile lead.

Timoner is best known for Dig! and We Live in Public, which both achieved cult status and won the Grand Jury Prizes at Sundance. Dig! is woven from seven years of footage of rising indie bands The Dandy Warhols and The Brian Jonestown Massacre, detailing their conflicts between commercialism, artistic integrity and each other. We Live in Public profiles Josh Harris, a larger-than-life dot.com pioneer who launched internet television in the early ’90s with Pseudo.com and whose infamous neo-fascist social experiment The Bunker was raided by the authorities on New Year’s Day 2000.

Taken together, her leading men are a trio of narcissists, but also revolutionaries with ideas ahead of their time: in Brian Jonestown Massacre frontman Anton Newcombe’s attempts to destroy the music industry with free music in the early ’90s, Harris’ realisation that the internet would fundamentally change human behaviour and eliminate privacy – more than a decade before Facebook appeared, and Brand’s agitation for a revolution in consciousness. But as Timoner discovered, anyone who got in the way of their highly-focussed visions would feel the fire. “Every genius, and every maverick I’ve ever filmed – and I’ve filmed a lot of them, which is why [Brand] came to me – has some self-destructive gene and this is what we’re witnessing right now with Russell,” Timoner explains.

Flashback to 2013 and Brand is hoping to resurrect a doomed film project, which by this point he had already put years of effort and a great deal of his own money in to. After other directors had abandoned, Brand brought Timoner onboard based on his love for Dig!, admitted his micro-managing had ruined the film and agreed to hand over full creative control. “He controls everything and he knows that, that’s one of the things he’ll admit,” Timoner explains. “He’d spent millions of dollars flying crews around and then keeping them in the hotel room, saying, ‘OK, turn the camera on, turn the camera off.’ He tried that with me, too, but but I’m not that easily controlled.”

The documentary that finally emerged, Brand: A Second Coming, is a thrilling and complex portrayal of the talented comedian-turned-revolutionary. Understandably, with a subject who has publicly battled with drugs, fame and sex, the film explores Brand’s darker side, presenting his flaws and moments of weakness alongside his triumphs, charisma and efforts to change the world. Timoner is adamant it’s an honest, authentic and largely supportive portrayal, but after she refused to remove certain scenes, Brand disowned the film.

Brand openly admits, “I’m a narcissist, but I’m your narcissist,” and much of the film centres around his Messiah Complex show, where he dissects Jesus, Malcolm X and Gandhi and finds elements of narcissism in leaders who, like him, wanted to change to find them world. “The limitations of being a narcissist means he can’t see himself clearly and he must control the way that he is presented, and he must present something to the world,” explains Timoner. “[In my film] he can’t see himself clearly and it’s painful for him I think. He might even be a little bit angry that somebody would have the audacity to tell his story, instead of him telling his own.”

Unknown to Timoner, Brand attempted to eclipse her film and embarked on another documentary project The Emperor’s New Clothes with British director Michael Winterbottom, which he released earlier this year and whose poor box office performance hurt Brand: A Second Coming. 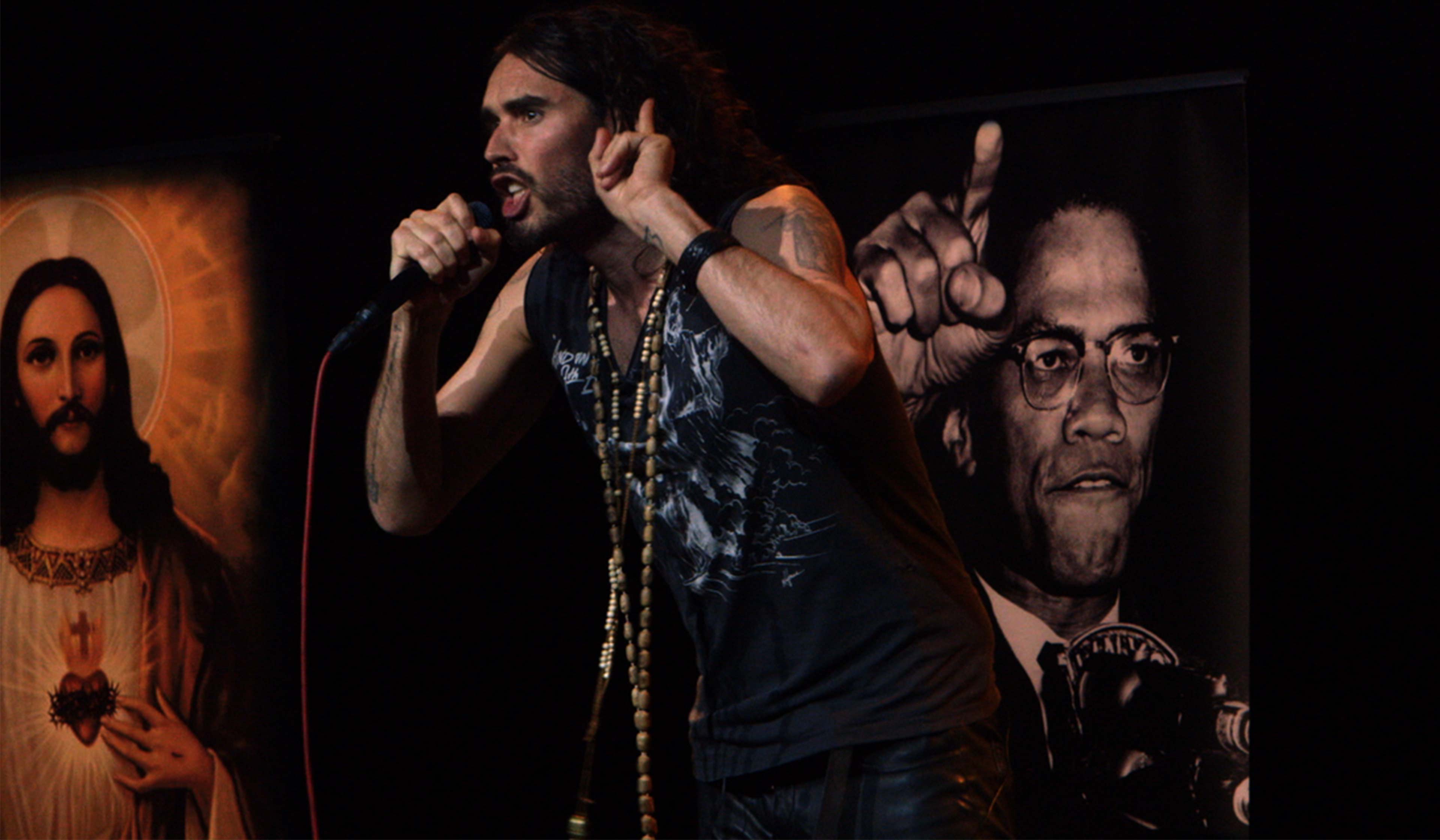 How would the film have turned out if Timoner had caved to Brand’s pressure? “We wouldn’t be sitting here because it would suck,” she explains. “I think he’s great, by the way. You can tell I made the film with a lot of admiration for him as well. But I’m also going to point out certain hypocrisies. Not just saying he’s hypocritical, he’s forced to be hypocritical.”

Brand is caught in a bind. His wealth and fame are powerful tools to achieve the change he wants to see – from helping to save Hoxton’s New Era estate from predatory property magnates or setting up the Trew Era Café, which helps rehabilitate former addicts – but they’re also a lighting rod for criticism. “The film shows that complexity and how a person who dares to step out of line and not just be a comedian, but try and do other things gets lambasted, gets totally slammed for it. That’s also not a reflection of him, that’s a reflection of our society.” 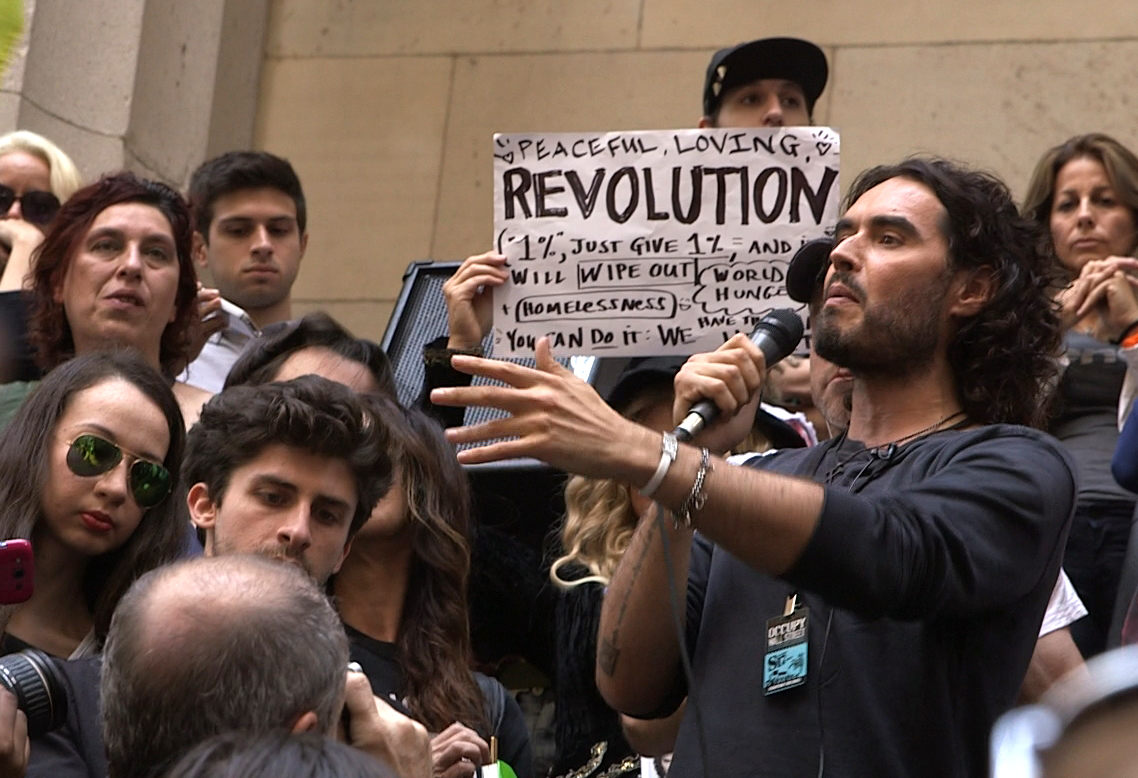 Like Brand, Harris and Newcombe struggle to accept a world yet to catch up with their way of seeing things and Timoner exposes the suffering that comes along with that. “I think they’re missing something,” she explains. “I think they’ve traded some sort of vision – they’re visionaries, they’re what I call ‘impossible visionaries.’ They act impossibly because they pursue impossible goals.”

“Anton wanted to play every instrument, record every record, be everything and overthrow the music business,” she explains. “He said record companies are mafia. I am the letter writer, they are the postman. He saw it clearly and he wanted to have a revolution in the music business. Again it’s man versus system. He was going to take it on and destroy it, and in order to do that he put music out for free, way before everybody else did.”

In Newcombe, Timoner first explored the narcissism of men determined to change the world. “He would be so abusive to people,” she remembers. “I always have that as an example of being so blinded by your own vision that it’s more important than the people around you.” Anton wrote on The Brian Jonestown Massacre’s official website: “I was shocked and let down when I saw the end result.  Several years of our hard work was reduced at best to a series of punch-ups and mishaps taken out of context, and at worst bold faced lies and misrepresentation of fact.”

We Live In Public wrapped in 2001 but Timoner held off the release until 2009. “Its relevancy didn’t even shine until years later, when grandma was on Facebook,” she explains, “until technology and society caught up to the vision Josh Harris had.” Before the turn of the millennium, Harris realised how technology would shape us and raised privacy concerns before Edward Snowden’s 2013 revelations made them impossible to ignore.

Yet Harris embraced the loss of privacy, putting a group of test subjects under constant surveillance in The Bunker, before webcasting his own life live on the internet at weliveinpublic.com. “I love Josh but he’s also really messed up,” Timoner explains. “We were all pawns in Josh’s chess game. He was all about that, all about the social experiment.”

Unlike Newcombe and Brand, Harris did turn up at the premiere, but in 2001 after losing all his money in the dot.com crash and nearly losing his mind after weliveinpublic.com, he broke into Timoner’s New York apartment to steal her master footage in an attempt to sink the film. However, Harris eventually had a change of heart, gave Timoner full creative control and even appeared at its premieres.

Where other filmmakers might have been burned by such forward-thinking but explosive characters, Timoner keeps flying to close to the sun. “They’re visionaries, they envision,” she explains. “Their suffering comes from seeing something so clearly when other people can’t, and just driving towards that vision, against all odds. It’s those people I love to film. Ultimately what is interesting to me is the role of ego and narcissism in anybody who’s going to change the world. Who has the audacity to stand there and say, ‘I have all the answers, follow me.’”

Brand: A Second Coming is released in the UK on October 23.