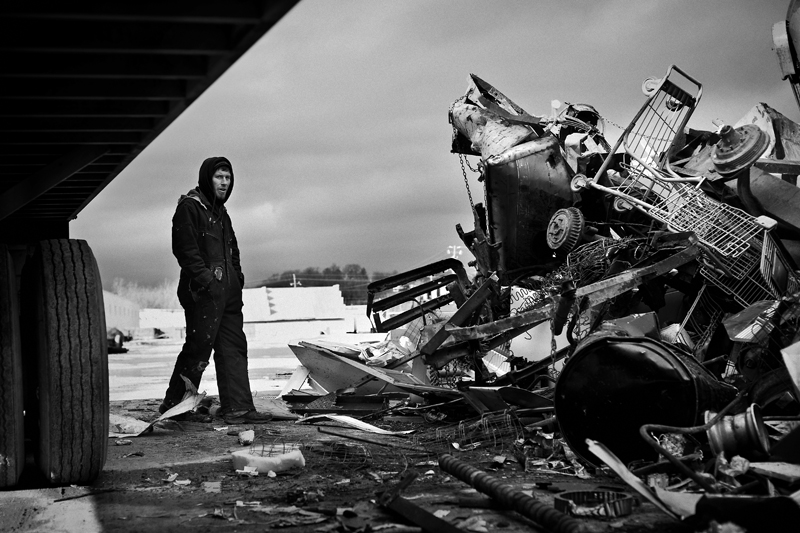 Photographer Mike Belleme has always been drawn to outliers who find ways to live outside the system. Here, he meets the dumpster-diving treasure-hunters who have found a way to survive - and thrive - by reusing what society has cast off as trash.

For most people, the first things that spring to mind when they think of searching through dumpsters or wading through junkyards are homelessness, desperation and disgust. But for those who engage in a scavenger subculture, wordplay takes a very different form: opportunity, art, resourcefulness, community and waste reduction are just some of the positive images that may pop up. For a range of reasons, these people thrive on the idea that they can live off the waste of others.

One Man’s Trash is an ongoing exploration into the many facets of this lifestyle. The people that I’m documenting for this project vary greatly in what they are looking for and what they choose to do with the things they find, but one thing they have in common is their motivating force: they are not scavenging out of desperation or necessity; instead, they are drawn to this lifestyle with a sense of purpose. Through the lens, I am working towards lifting the negative stigma that has been assigned to people who live this way and attempting to shed some light on the positive impact these treasure hunters can have on the world around them. 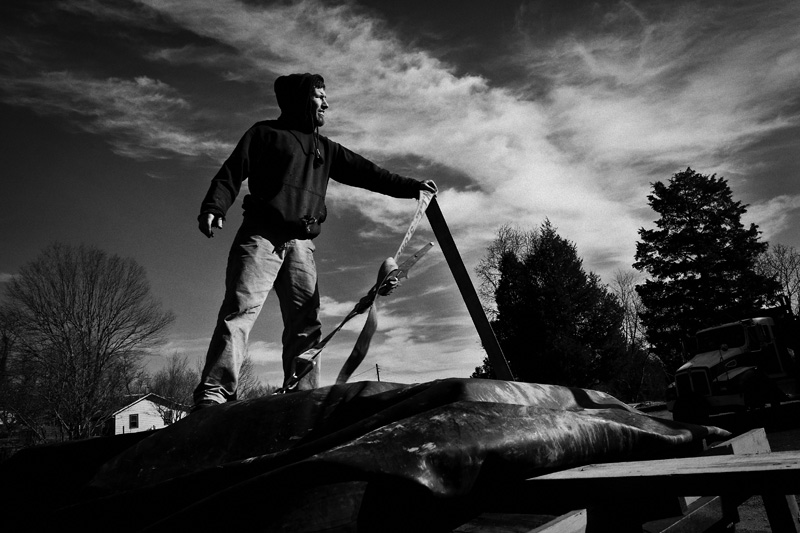 Sometimes I think that Jinx has biodiesel for blood, bones of rebar and a heart made out of used car parts. If there is one man who personifies the ideals of this project, it’s him. Jinx reeks of creativity and explodes with energy. His brain is equal parts mad scientist and third-grade class clown. Although his primary motive for scavenging is to find things he can incorporate into his art, using second-hand objects permeates all aspects of Jinx’s life. 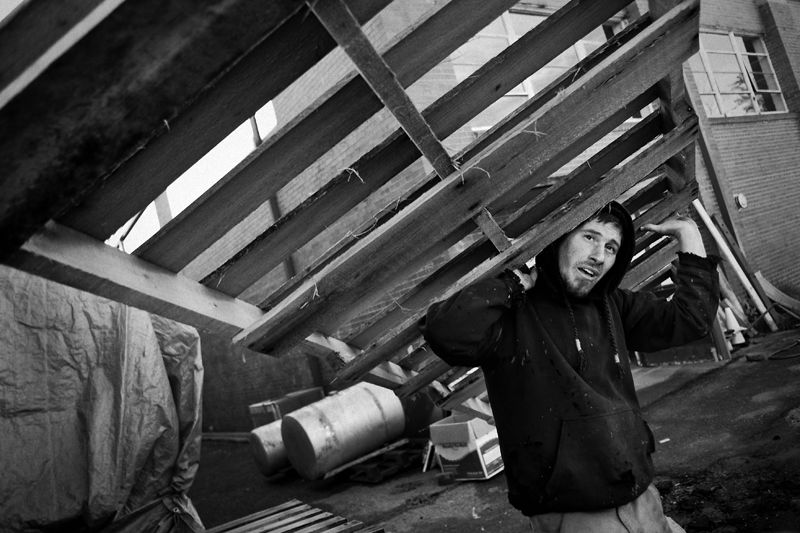 “I built the first phase of a million-gallon-a-year used-grease biodiesel [power] plant out of found materials,” says Jinx. “The interior of my school bus where [my girlfriend] Melissa and I live is built completely out of second-hand materials that were salvaged from an old farmhouse.”

Jinx’s art perfectly reflects his exuberant personality; each piece is full of life. Take, for example, an installation he created from a chopped-up motorcycle with a huge, long cage full of rubber chickens protruding above the rear tyre. A lever releases a chicken onto the spinning wheel, sending it flying about thirty metres. This piece, like all of Jinx’s work is comprised entirely of parts collected from his many scavenging adventures: “First I peruse through the scrapyards for steel, bronze and aluminium, but that still can be expensive. I look through the Internet because it really saves on gas and there are so many people out there with crazy amounts of crap. Most of the time people call me up and give me stuff – that’s my favourite.” 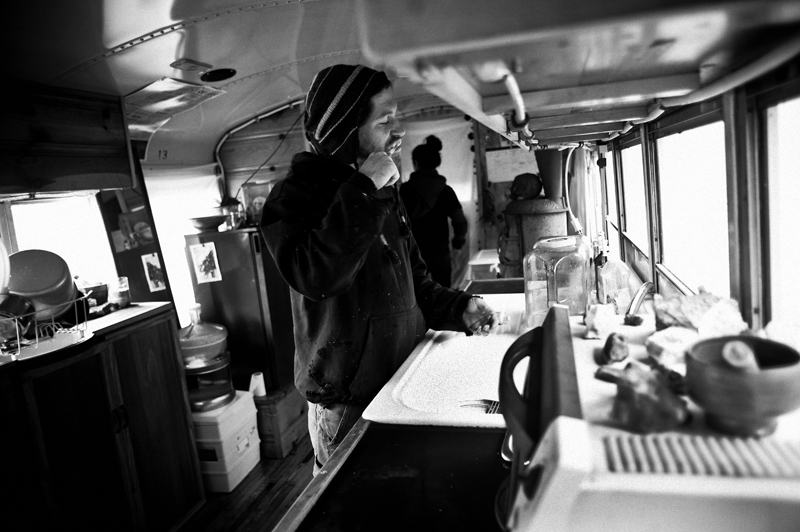 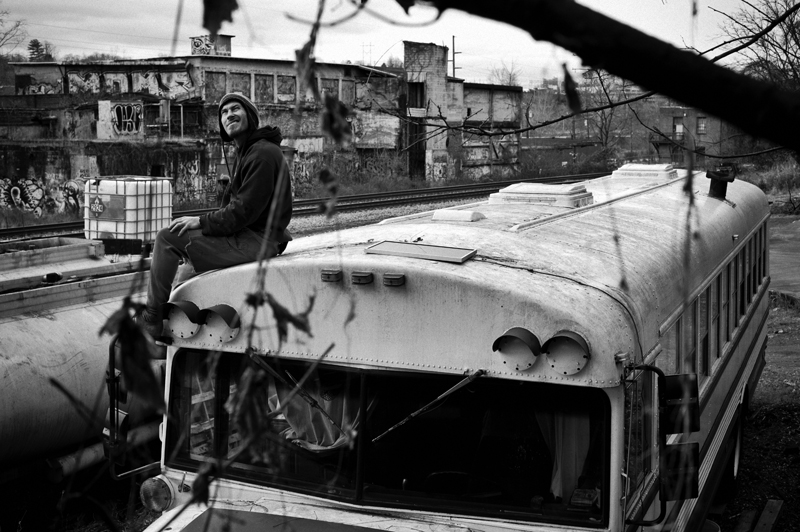 Jinx and most of the other people who live similar lifestyles are opposed to the shameful wastefulness that surrounds them. Only, they’ve found a way to make the best of a bad situation. As Jinx explains, “I can see something in remnants of our failing world. I am a surgeon operating on the problem of over-consumption and non-creativity.” 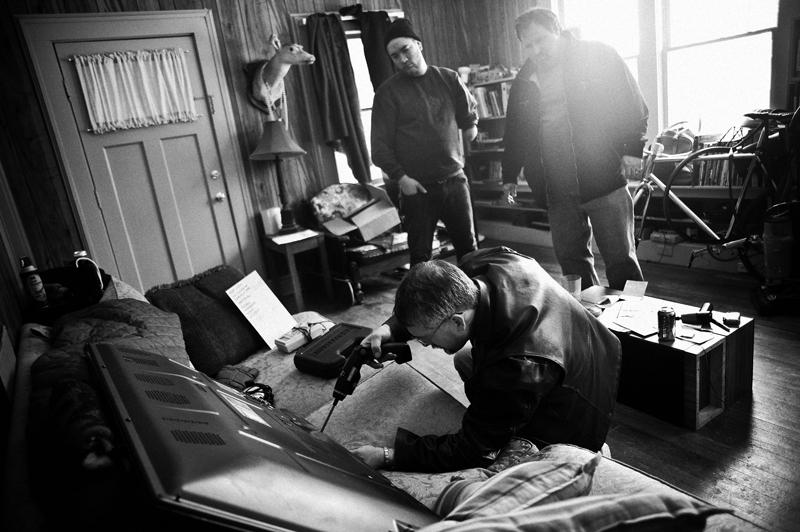 Will has been one of my best friends for almost half of my life. Recently, we bonded on a new level. There’s just nothing like huddling inside a dumpster to build a friendship. His involvement with the underground hardcore music scene introduced him to the scavenger lifestyle. Up until last year, Will was living in Columbia, South Carolina, where he was part of a community that not only supported themselves through scavenging, but helped others using an intricate knowledge of the city’s dumpsters. 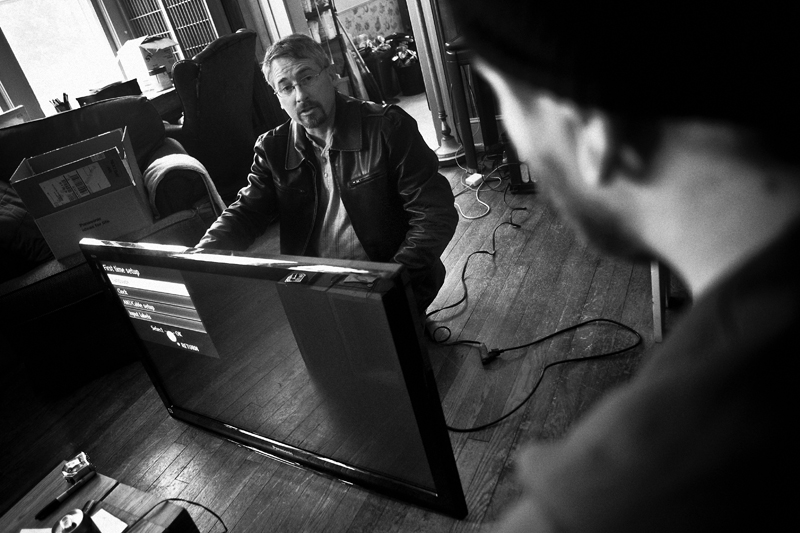 “We have had dumpster potlucks and I started a communal food bank based out of my home,” explains Will. “From dumpstering, we fed approximately twenty-five people, one meal daily. We also supported a local ‘Food Not Bombs’ chapter [who supply free food for the homeless] with our dumpstered goods.”

Although Will and I have always been close, this part of his life was always kind of a mystery to me. When I convinced Will to move to Asheville, North Carolina, where I live, I started coming along with him as he found his way around the dumpsters of a new city. I quickly discovered the thrill of a good dumpster score and learned as much as I could from my scavenger friend. I was hooked. 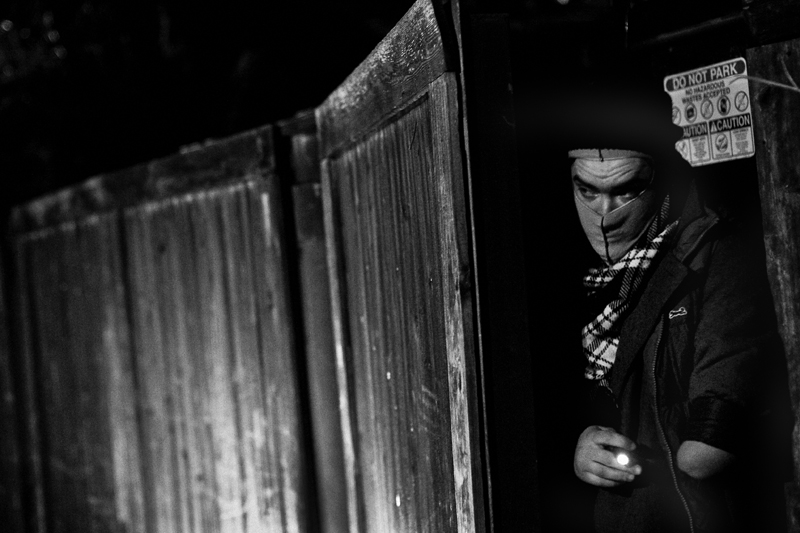 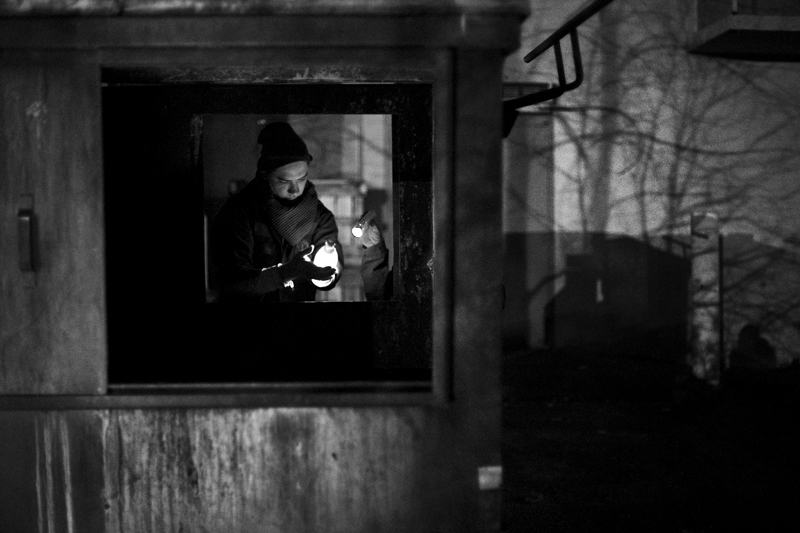 After a weekend trip back home to Columbia, Will returned with a huge flat-screen plasma TV. Although it wasn’t working, he knew he could get good money just for the parts. He noticed the manufacturer date and after some online research found that it was still under warranty. He called the manufacturer and made up a story – involving a girlfriend who bought the TV, a horrible break-up and a lost receipt. Within a few days, they sent out a team of repairmen to Will’s house and fixed the TV free of charge.

Will often finds electronics that are in perfect working order. As he explains, “Everything in America seems to be utterly disposable and people most often just buy something new to replace something that is perfectly fine.” 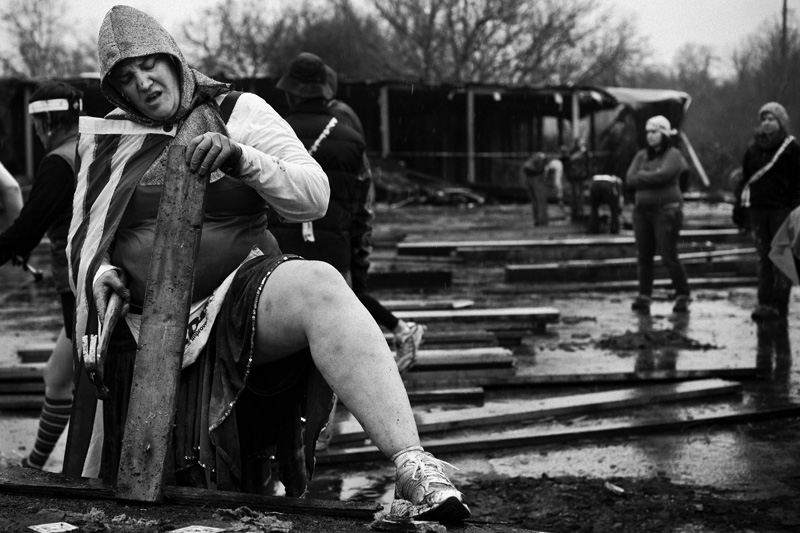 The Idiotarod is a strange thing to try and explain. Grown men and women dressed in superhero and zombie costumes, or different kinds of drag, race through the streets with shopping carts, stopping along the way to plant trees and flowers, pry old nails from lumber and help with all manner of other community projects. The Idiotarod – a parody of the Alaskan sled race, the Iditarod – started in San Francisco in 1994 and finally made its way to Asheville in 2009. 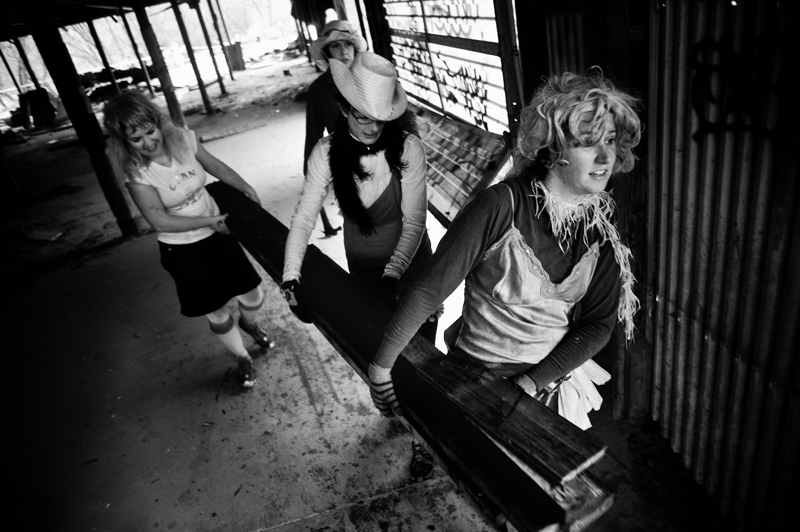 Jinx was organising one of the community projects for the race and told me that he thought it would be a great way to incorporate community into my documentary. He had already been working hard with some friends in Asheville’s river arts district to tear down an old abandoned building, rescue the old lumber and metal and put it to better use.

The challenge for each team of ‘idiots’ was to pry nails from ten pieces of lumber, and stack them onto a trailer, all the while being taunted and ridiculed by Jinx and his friends. “Altogether 293 pieces of usable lumber were produced,” claims Richard Hanley, organiser of the Idiotarod. 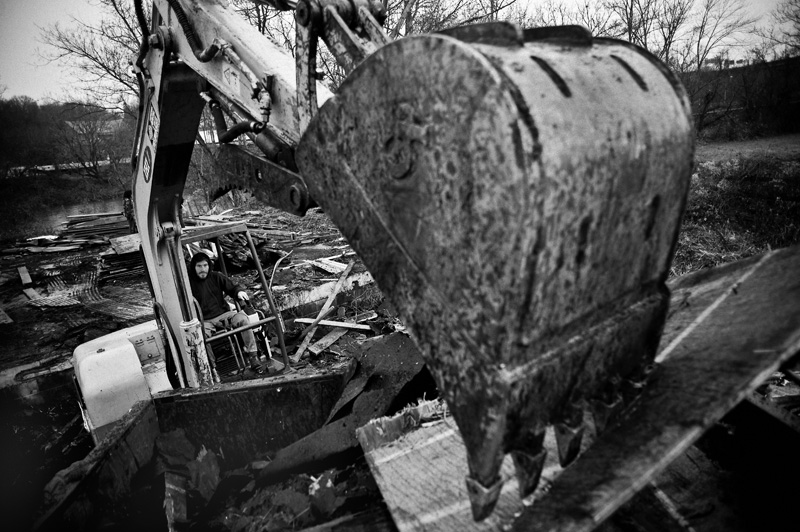 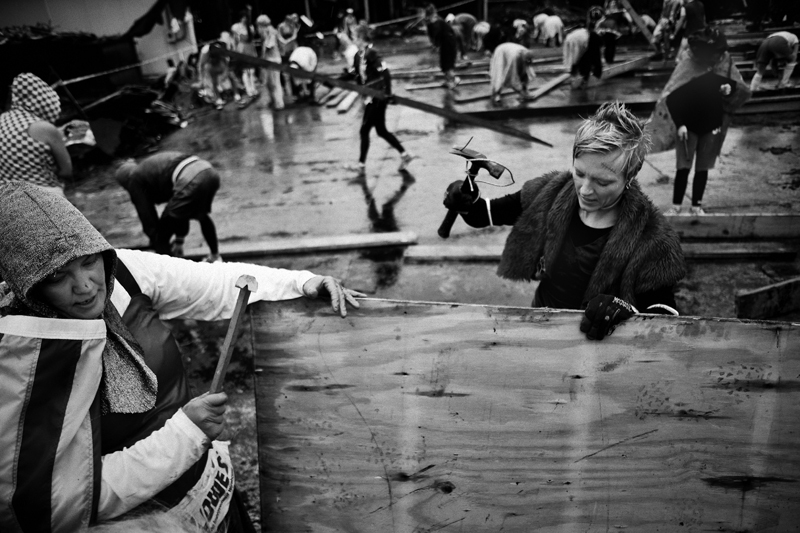 I rode with Jinx as he hauled the lumber to a nearby site where an artist co-op is due to be constructed at an abandoned school. Jinx hopes to build himself a studio/living space there with the help of the wood collected. Metal was salvaged from the remains of the building and was sold to a local metal yard. Plans are also under way for a greenway – a traffic-free route – which will pass through where the building once stood.

It’s amazing to stand back and watch as the initiative of just a few people turns an old dilapidated waste of space into a community for artists, a nice chunk of money, a location for a future greenway, and a ton of fun

This story originally appeared in Huck 22 – The Counterculture Issue.

Linkedin
RELATED ARTICLES
OTHER ARTICLES
Global temperatures reached a record high in 2016 but many world leaders refuse to listen, so what's next in the fight to keep our planet protected?
Brazilians affected by the fatal Samarco dam disaster present community demands for reparations to mining corporation BHP Billiton’s London AGM.
When toxic mud swept across Southeast Brazil, oceanographer and surfer Eric Freitas Mazzei refused to let anyone sugarcoat what was going on.
Xiuhtezcatl Martinez is a young environmental artist and activist from Boulder, Colorado, whose unorthodox campaigns are gaining international attention.