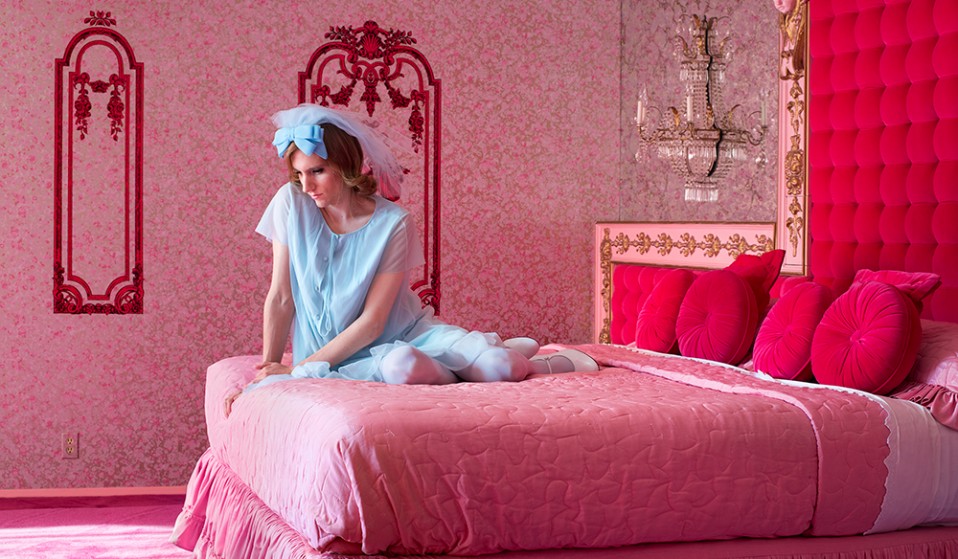 Through a series of intimate portraits, photographer Lissa Rivera and her partner BJ Lillis have constructed their own fantasy world. Here, Lissa explains what went into making one of their boldest images – a testament to the bond between artist and muse.

Artist Lissa Rivera started photographing her friend BJ in fantastical scenarios after he revealed that he’d almost exclusively worn women’s clothing in college. After graduation, however, he struggled to navigate a world that seemed to alternately celebrate and revile male displays of femininity.

Over time, her muse became her lover, and the pair continued to explore identity through worlds they constructed together.

“Our fantasies have no fixed or static meaning; they represent a fluid space of feeling and desire,” says Lissa, who’s based in Brooklyn.

“We act out our obsessions and fleeting interests alike. The images are rooted in the visual language of gender as seen through the history of photography and cinema as well as the pleasures – and sometimes perils – of looking and being looked at. Though our relationship is real, we believe that documenting our fantasies, which take up so much space in our consciousness, is just as legitimate as documenting reality.”

On ‘Pink Bedroom (for Priscilla)’ from the series Beautiful Boy

“The initial inspiration for my photos often comes from a particular film or photograph that strikes me as especially potent. Last year, I began listening to reruns of A&E Biography or E! True Hollywood Story while editing photos (playing the episodes on YouTube and then minimising the window as I work).

In these narratives, fame and glamor always come at a price. In the early 20th century, the American film industry rose out of the California desert like a mirage. Artists, many of whom came from harrowing personal backgrounds, created this land of make-believe to reinvent themselves through the techniques of cinematic visual pleasure.

I became interested in the idea of losing oneself in the process of becoming self-made. I then began to attach this idea, visually, to the 1960s – a time when the stars of the silent era were old men and women, grappling with the mortality of the body and the relative immortality of the movies, just as a new generation of sex symbols emerged in Hollywood and on TV. It signified a rapidly changing culture around sex and women’s proper sphere.

A lot of people think this photo was taken in the Madonna Inn, a well-known kitsch hotel, but it was actually a private home, built and decorated in 1969 – at once perfectly preserved and very much lived in.

The walls were completely metallic, save for ornate patterns in flocked velvet. The upholstery and bed linen were the original polyester, matched to the carpets, drapes, and wallpaper.

To find the location, I had spent weeks browsing real estate listings online, looking for unaltered interiors. When I did find a promising listing, I almost never got through to the owner, but this house worked out. I immediately booked a flight to LA for BJ and I, and began putting together a collection of potential costumes and props from eBay.

When she first came into the public eye, she was like a caged bird; the perfect symbol of female innocence and beauty in the eyes of the most desirable man, Elvis Presley. I felt that Priscilla was an icon of the 1960s.

The story goes that she lost all of her mystique after she became a mother. I wanted to explore this fantasy of femininity, seemingly idealised by Elvis – a vision that was very sexualised, yet very virginal, and meant to be of the domestic realm.

Right before BJ and I were about to leave for California, the owner changed her mind unexpectedly, and I had to beg her to let us shoot. We were supposed to have six hours, but it was cut down to three. Although I usually prefer solitude, the owner was present; it had been her mother’s house, and her grandkids were playing in the pool.

I thought about the way Diane Arbus portrayed women in their bedrooms: women who at once had achieved the highest echelon of femininity and domestic opulence, yet at the same time were somewhat of a prisoner to it.

Their skill at projecting glamour gave them real power, but at the same time it seems to have isolated them somehow, from other people or from themselves. I felt like the house was somewhat of a mausoleum, preserving a bygone set of ideals that are at once vulgar and supremely innocent in their aspiration.”

This image appears in Huck 63 – The Fantasy Issue. Buy it in the Huck Shop or subscribe to make sure you never miss another issue.

Linkedin
RELATED ARTICLES
OTHER ARTICLES
Following the release of his latest album, the rapper talks about finding a new approach to songwriting, attitudes to poverty, and why his music is more than a political statement.
We introduce our series spotlighting the voices of people who’ve been impacted by anti-abortion laws and anti-choice protestors.
Tough fines and arrests for drug possession and supply is pushing festival-goers towards unsafe measures to consume or smuggle in their substances.
Danny Burrows discusses his new series of images documenting an pacifist anabaptist community who lead an alternative way of life.
Students are being left to languish in unsafe housing, in some cases leading to serious health complications.
In the latest instalment of Photographers in Conversation, the creator talks portraiture, platforms and taking inspiration from Little Simz.