Art & Culture / Photography / Photos that capture the power of solidarity 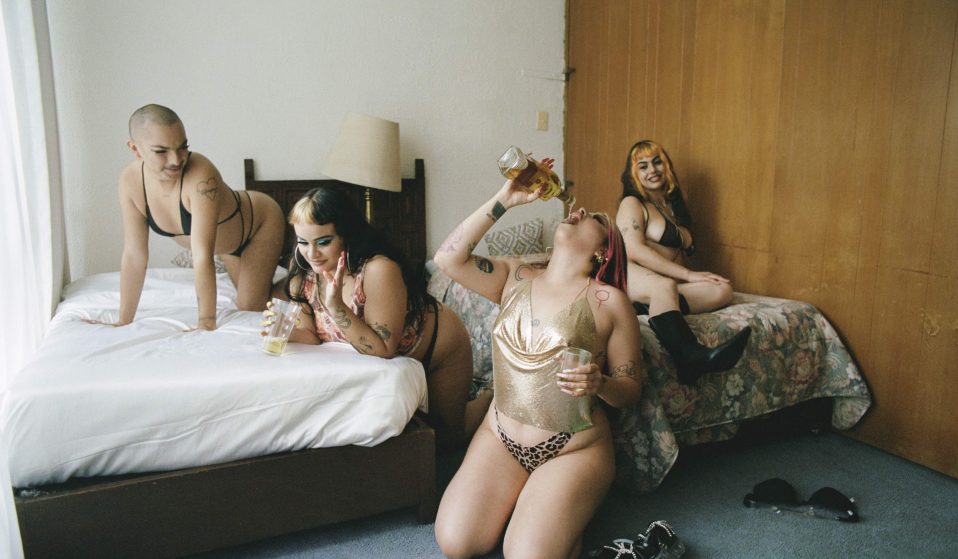 How do we stay strong in the face of adversity? For the latest Magnum Print Sale, the world’s best photographers share their most inspiring images.

How do we stay strong in the face of adversity? For the latest Magnum Print Sale, the world’s best photographers share their most inspiring images.

2020 has, so far, been a year defined by unrest. With a pandemic still ongoing, and thousands taking to the streets to protest racism and police brutality, the world’s foundations are being shaken.

Which is why, for their latest Square Print Sale, Magnum Photos are turning their focus to unity. The collection, officially titled Solidarity, aims to examine the “human yearning for commune and connection”, particularly among communities facing adversity and oppression.

The selection will bring together over 100 images and texts from a variety of international artists, including Bruce Davidson, Eve Arnold and Harry Gruyaert. “Some of the images in the curation explore moments in history where human bonds and the rallying of masses to a cause strove to bring about positive change,” explains a spokesperson for Magnum Photos. “Other photographs in the curation explore personal paths to understanding the power of solidarity through relationships with loved ones, strangers, or movements.”

In a show of support to the Black Lives Matter movement, 50 per cent of profits from the sale – which was organised in collaboration with Vogue – will go towards the National Association for the Advancement of Colored People (NAACP). You can see a selection of the images for sale below. 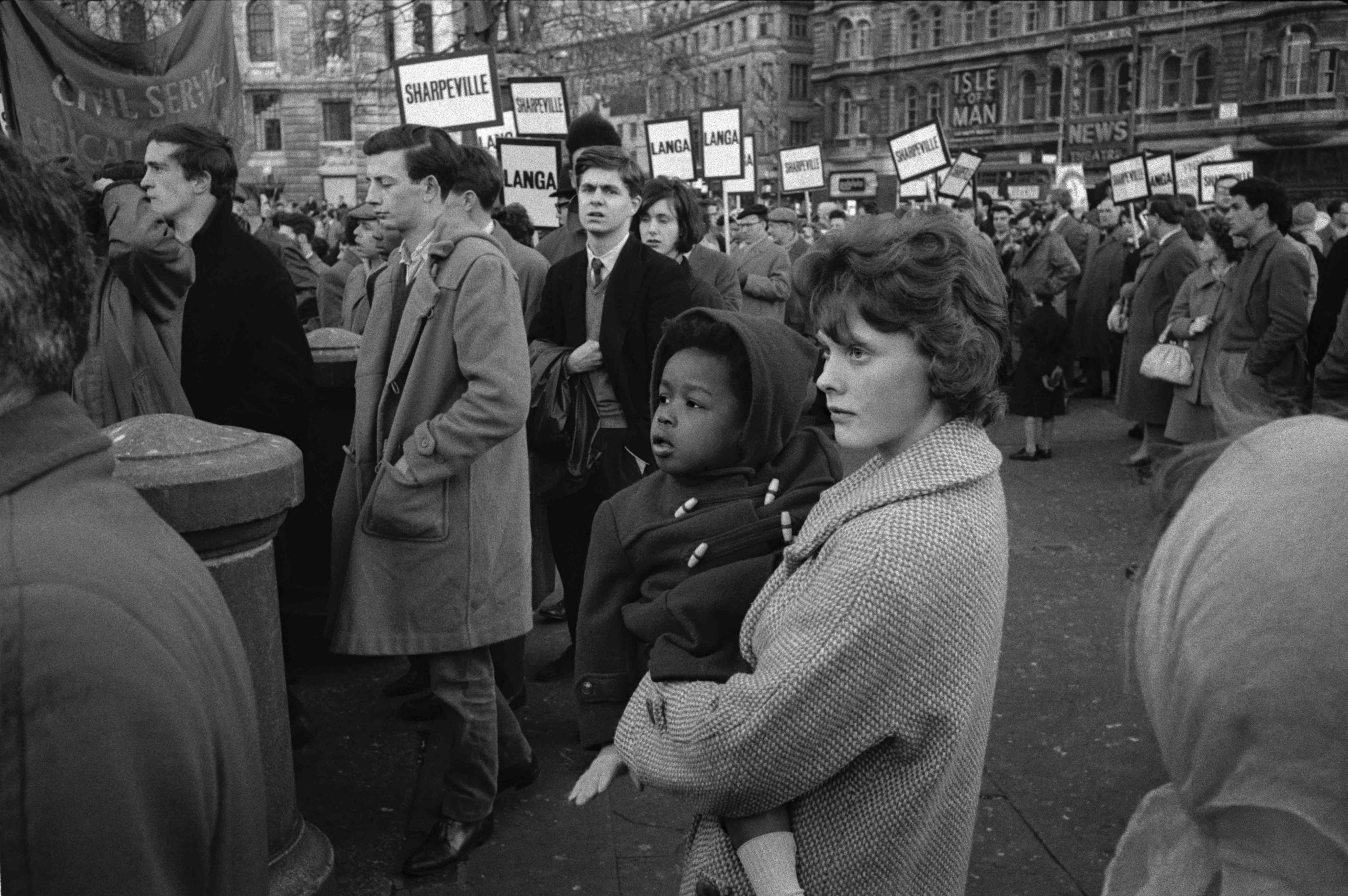 “Fighting racism is a generational battle and Philip was documenting the struggle 60 years ago. The Philip Jones Griffiths Foundation stands with BLM, the NAACP and all people pursuing equity of opportunity and equality in justice.” – Estate of Phillip Jones Griffiths 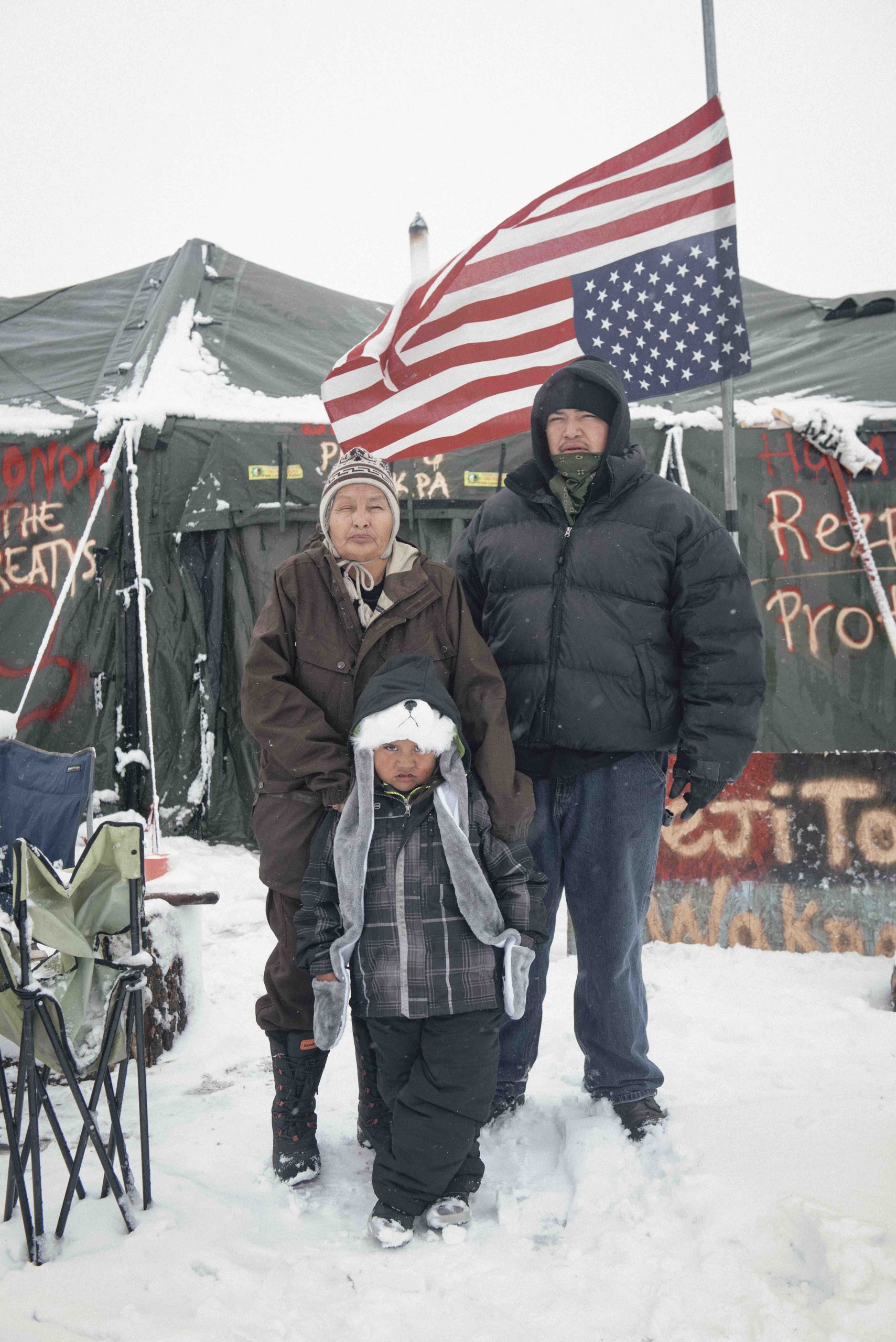 Vic Camp, Lakota Sundance leader of the Pine Ridge reservation, with his family

“Vic Camp, Lakota Sundance leader of the Pine Ridge reservation, stands in protest and solidarity with his family over months from summer to the snows of deep North Dakotan winter. His camp is one of thousands at the Oceti Sakowin protest village along the Cannonball River. The upside-down American flag is a sign of distress. It is a visible symbol that Lakota consider their land and water more important than allegiance to a nation-state that has repeatedly betrayed them.” 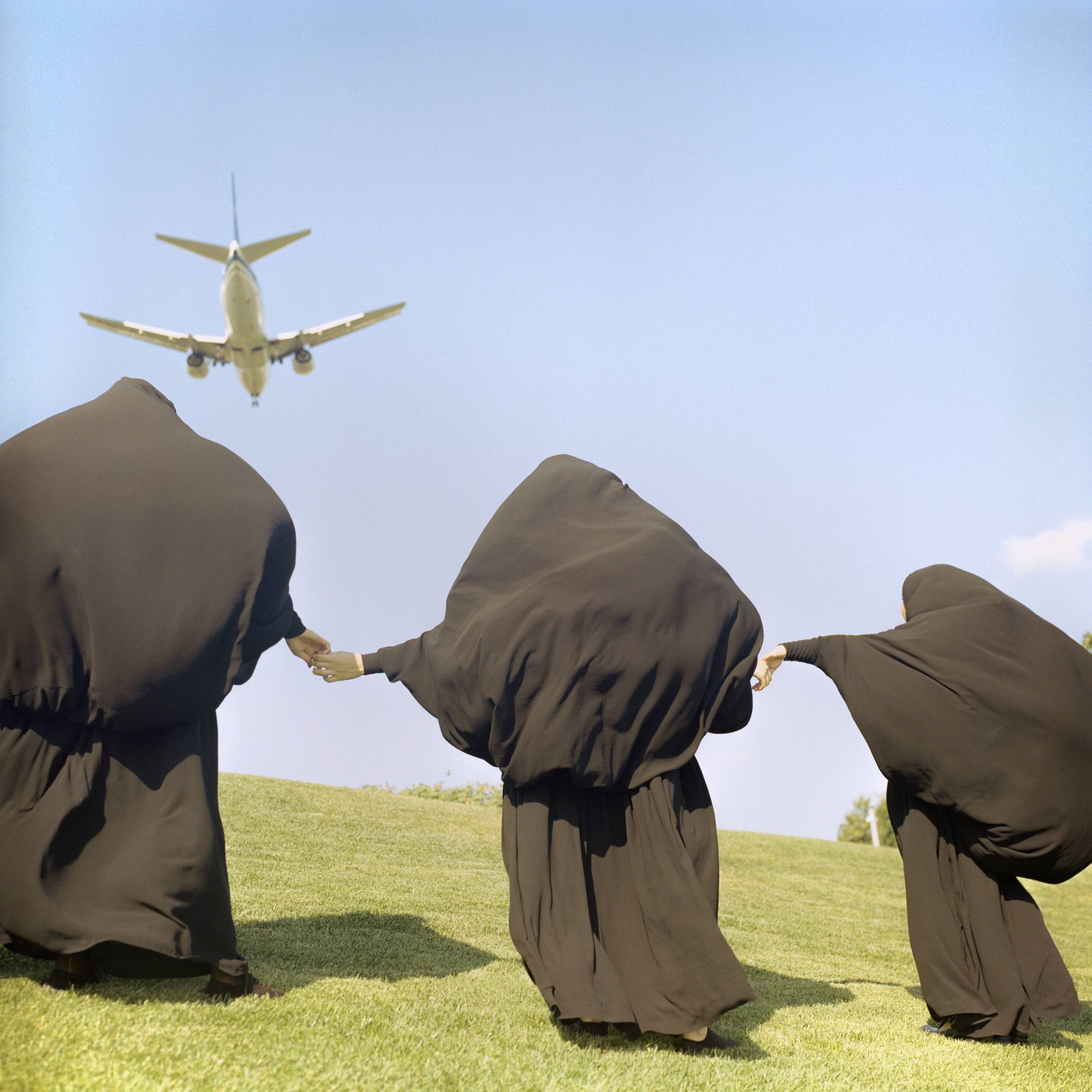 TURKEY. Istanbul. 2018. A plane flies low over students at a picnic during the weekend.

“Solidarity comes in many shapes, sizes, and forms: brother to brother, sister to sister, supporting each of our rights to be ourselves in all different shades of light. For me, this photograph of students of the Quran school for girls shows their solidarity as they hold hands against the wind. The best way of staying strong in a boarding school is through friendship.” 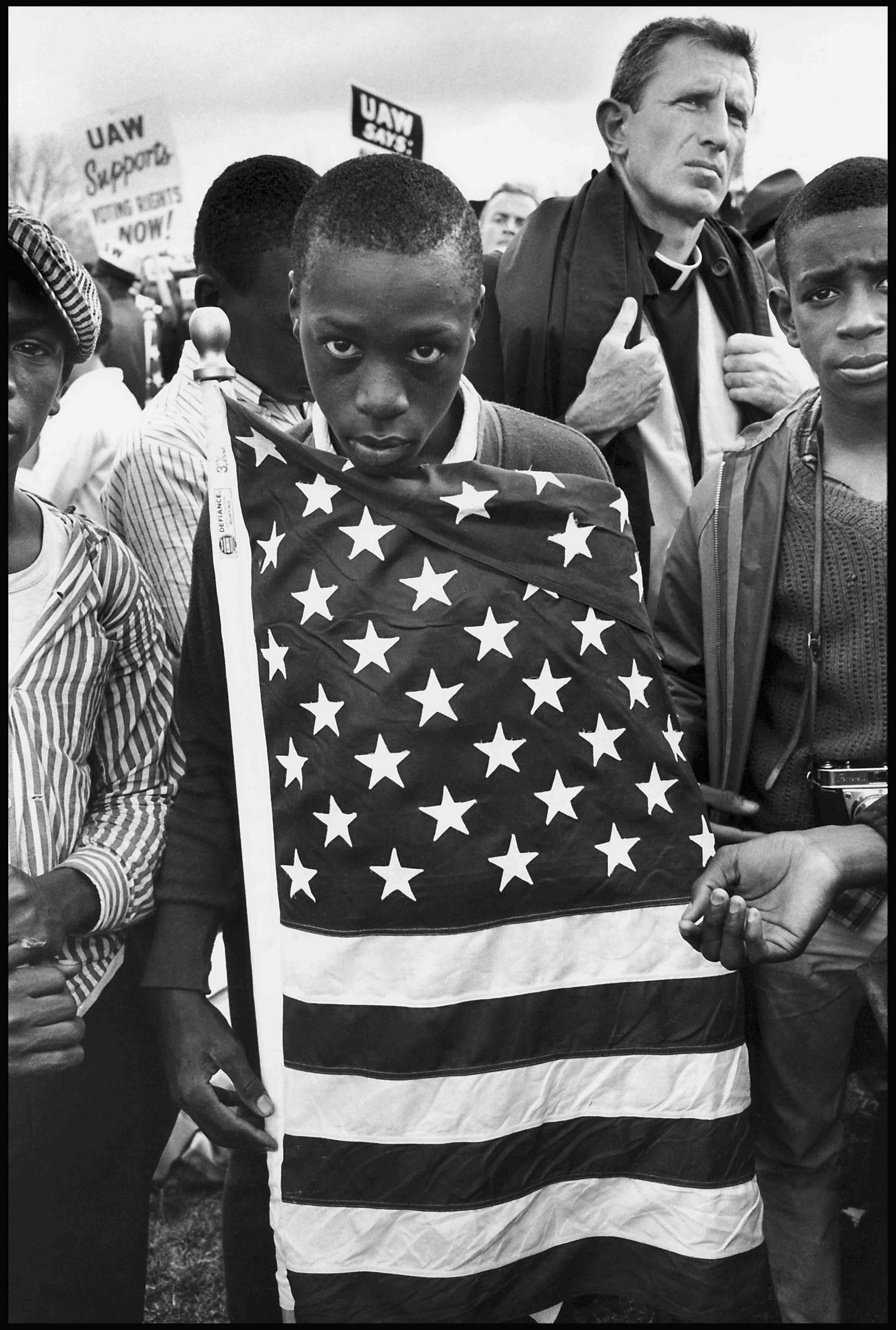 “This photograph was taken during the 1965 protest marches from Selma to the Alabama State Capitol in Montgomery. Martin Luther King Jr. led a group of African-American, non-violent marchers to exercise their constitutional right to vote, in defiance of segregationist repression. This was a watershed moment in the US civil rights movement. I came across this young demonstrator, wrapped in a flag, protesting racism; behind him is Father Smith of San Antonio, a white catholic priest who protested against injustice for most of his life.” 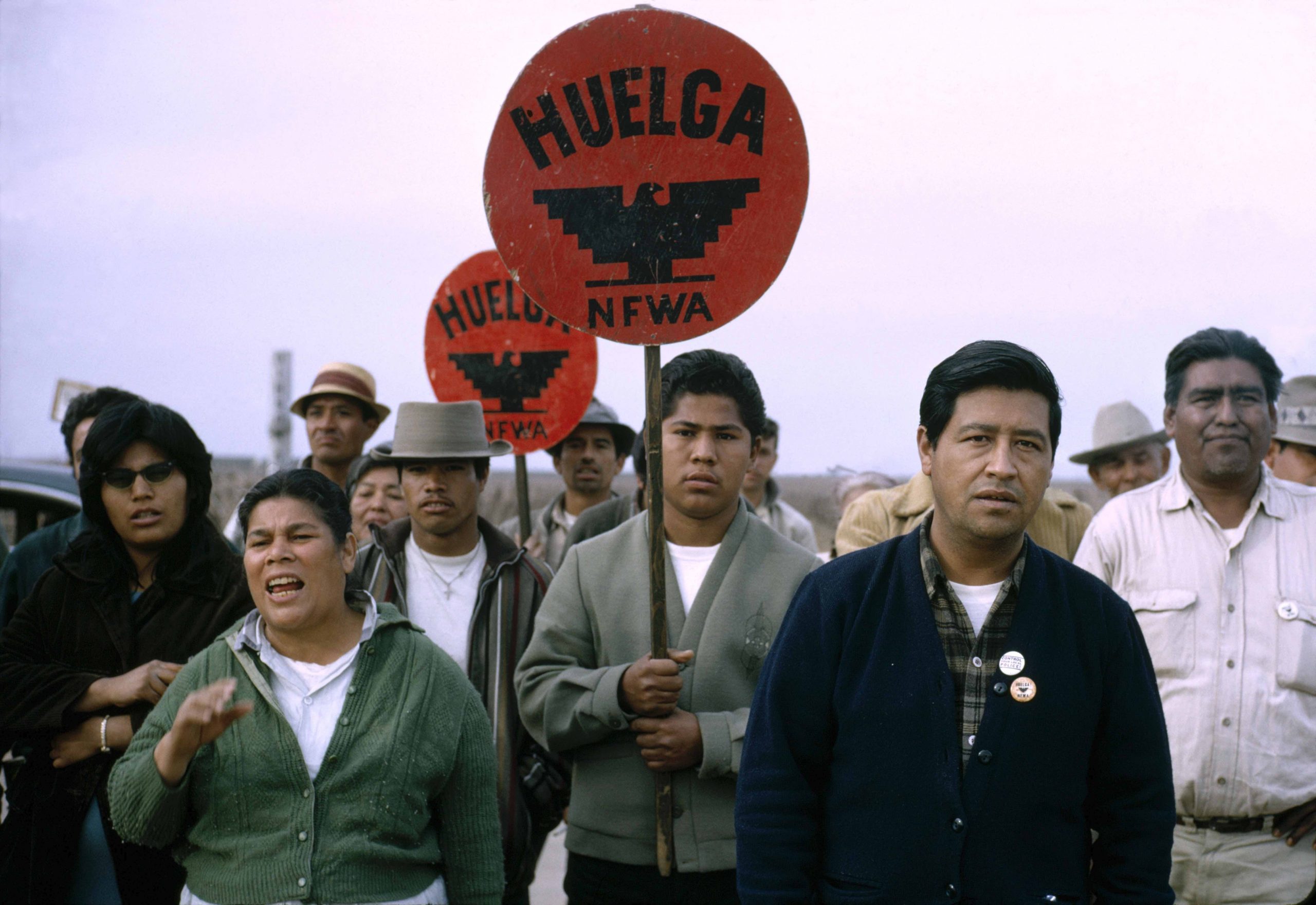 “In March of 1966, the United Farm Workers Organising Committee (a merger of the National Farm Workers Association, or NFWA, and the Agricultural Workers Organising Committee, or AWOC), called a strike against California grape producers who refused to recognize the union, which was also a protest against years of poor pay and working conditions. César Chávez – founder of NFWA along with Dolores Huerta – led 75 Latinx and Filipinx farmworkers on a 340-mile march from Delano to Sacramento. The strike lasted more than five years and grew to include an international consumer boycott of grapes supplied by non-union producers.

The solidarity that Chávez and Huerta cultivated by training and organising thousands of farmworkers resulted in a victory, with the United Farm Workers becoming a recognised union – the first contract between producers and the farmworkers they employed in US history. This solidarity was vital to the success of the union, as Chávez stated, ‘from the depth of need and despair, people can work together, can organise themselves to solve their own problems and fill their own needs with dignity and strength.’” – Marina Fusco Nims, on behalf of Paul Fusco 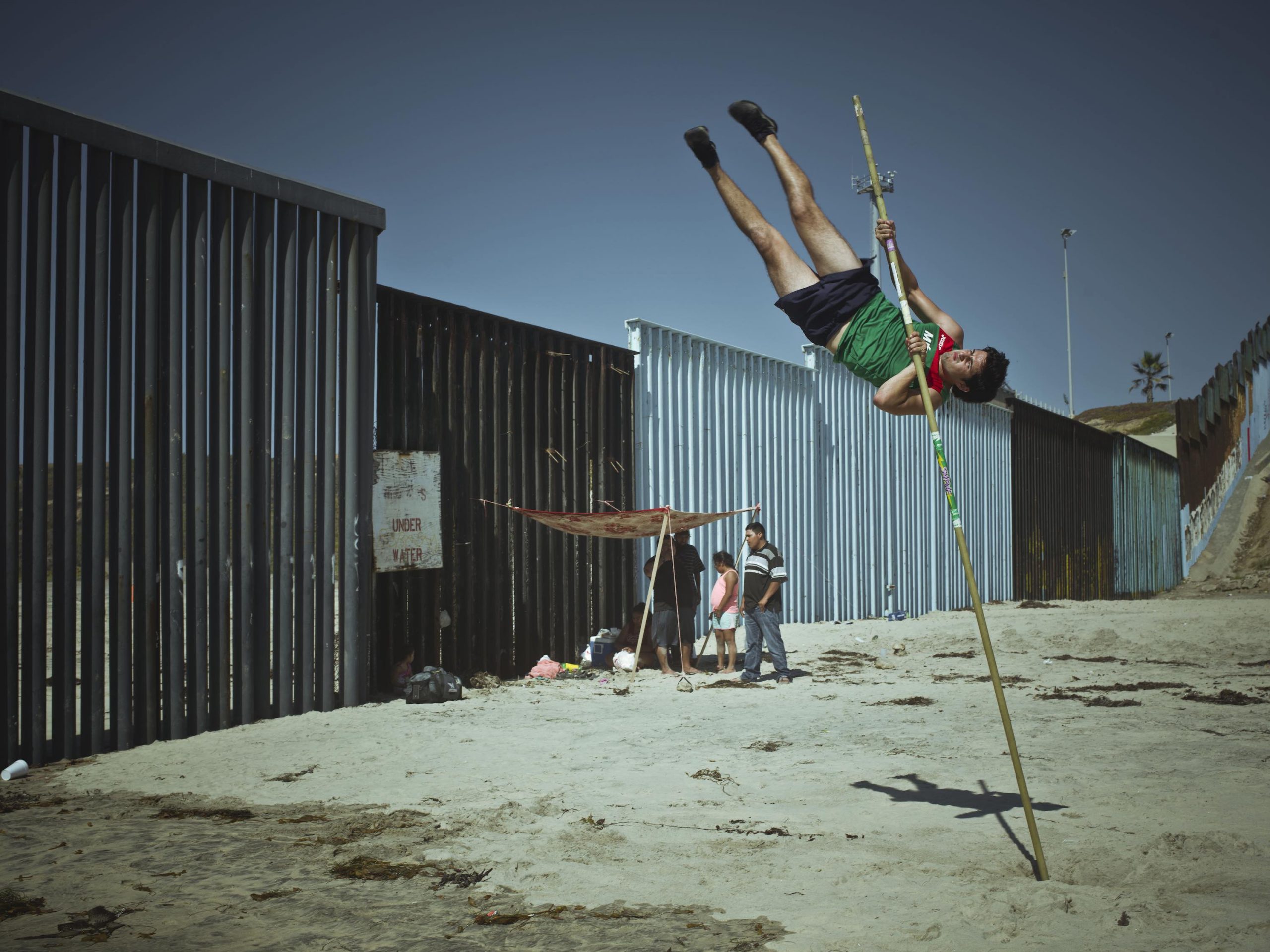 Jorge Luna, a professional Mexican pole vault jumper trains by the border fence on the beach of Tijuana. Tijuana, Mexico. 2018.

“I read on the internet that we shouldn’t be scared of what we don’t understand, but I probably shouldn’t be relying on the internet to understand anything at all. Because of all the noise, these are confusing times on the surface, but also times where there is deep clarity in how to do good, and how to be potent and forceful in supporting the necessary changes to paradigms. The comfortable absurdity of the system is finally being questioned and it feels like there is room for dreaming of a future where the new logic that organises the world is not that of the market, of historical power, of habit or of fear.” 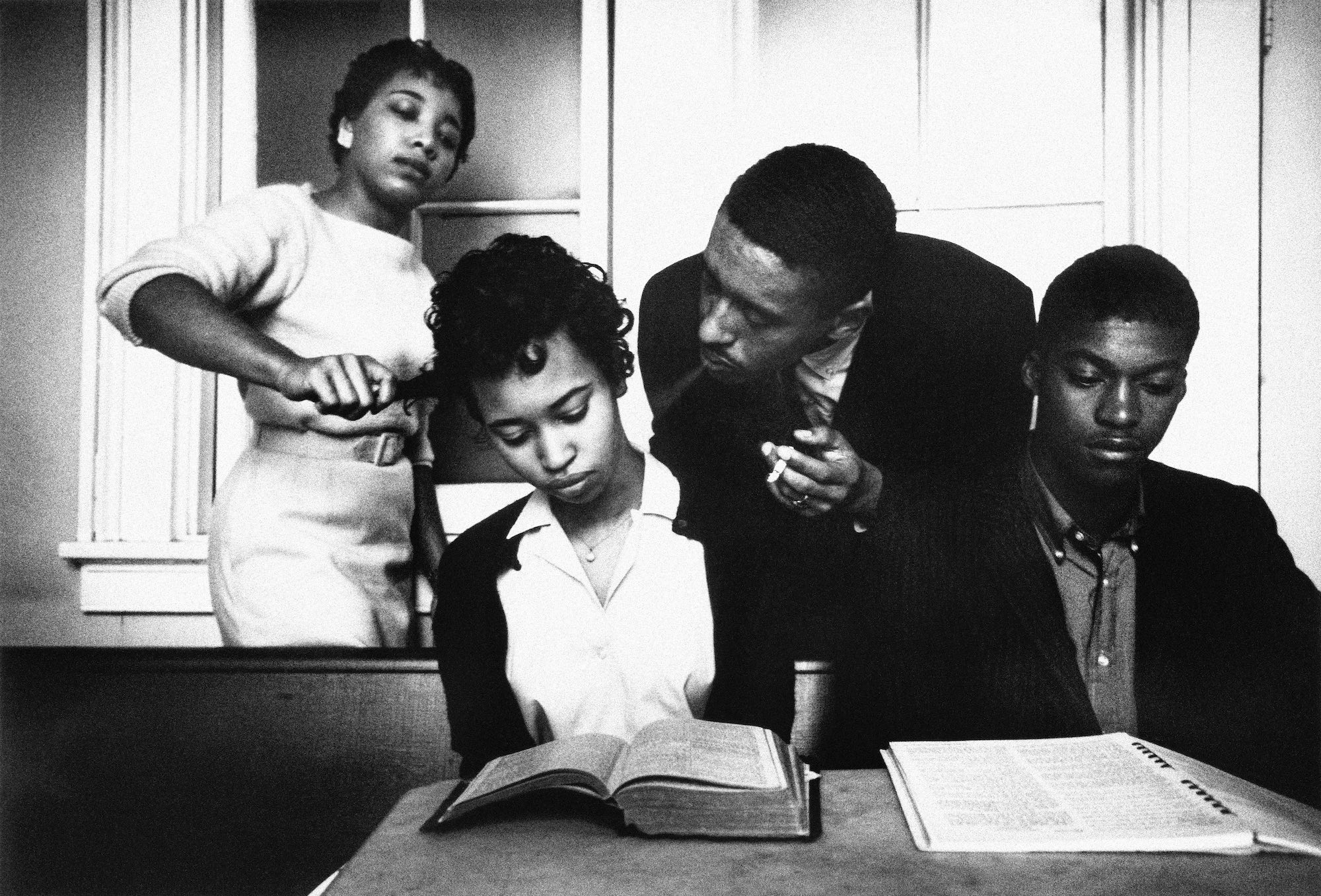 “In Eve Arnold’s book, Flashback! The 50’s, she recalled the following: ‘CORE (Congress of Racial Equality) was representative of group cooperation between blacks and whites. They had set up training facilities throughout the South to teach resistance techniques that would open doors that white bigotry had closed…

It was tough training. The next day, still in the church, Priscilla Washington was given a practical lesson in what might happen to her when she sat down at a white lunch counter. Fellow blacks trained for the work [and] acted out the parts of whites. Priscilla was called “biggity [n—–]” and “black bastard” and remarks like ‘What you want anyway? Haven’t we done enough for you?’ were thrown at her, while her trainers pulled her hair and a man blew smoke in her face. She stood it stoically for two hours, trying to concentrate on the Bible she was reading.’

60 years on from this photo, the murders of George Floyd, Ahmaud Arbery and many others remind us there is much work still to be done. The NAACP needs your support to campaign for vital policy reform.” – Michael Arnold, Estate of Eve Arnold 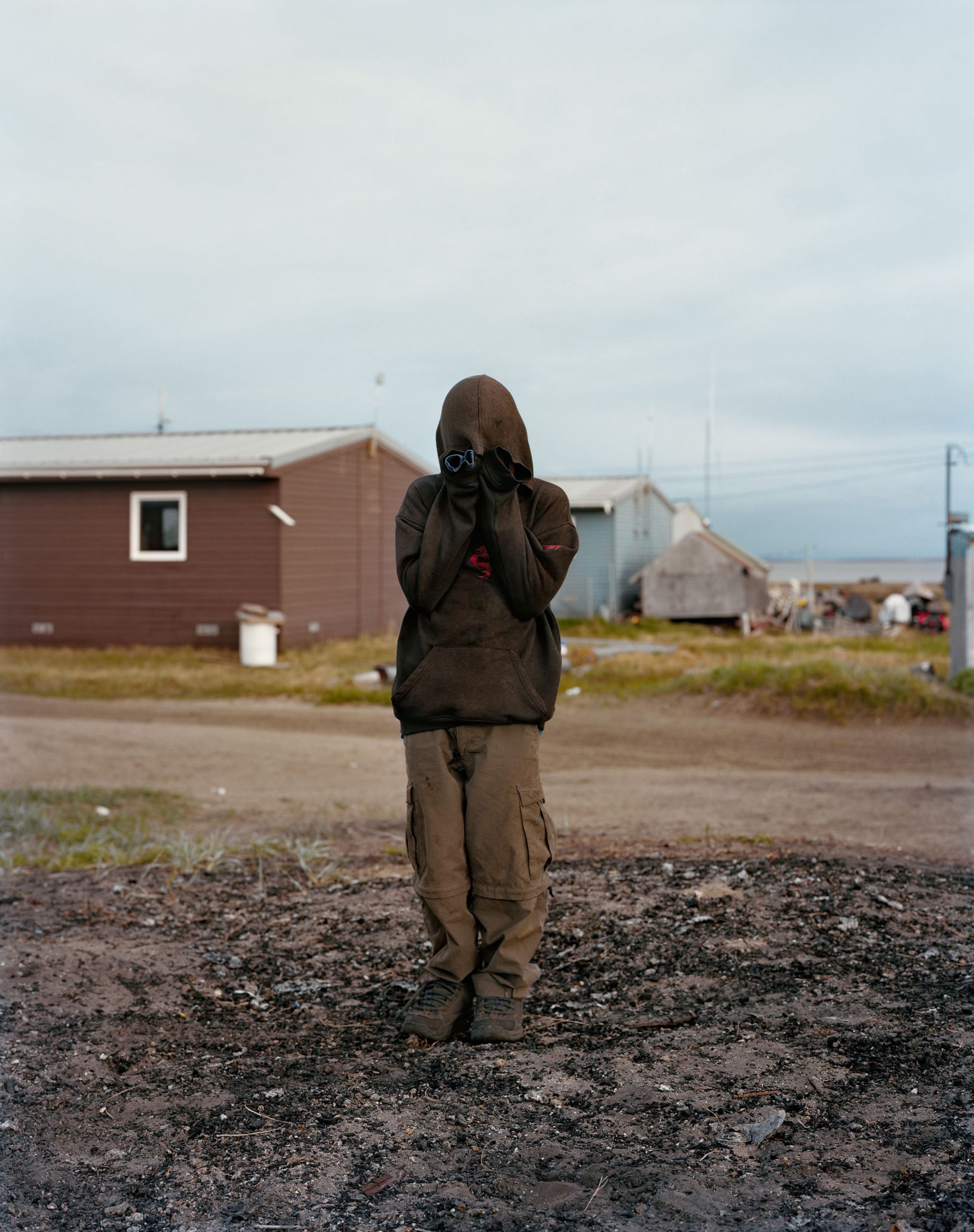 Teddy Sockpick. Shishmaref, Alaska. 2007. From the series The Last Days of Shishmaref (2008)

“Teddy Sockpick lives on the island of Shishmaref, a community of 600 Inupiaq off the northwest coast of Alaska. The island is slowly but surely being swallowed by the sea. Due to global warming, the island’s protective permafrost layer has been melting for many years. Relocation is imminent. Lixenberg stayed in Shishmaref for several weeks during the winter and summer of 2007. By combining portraiture, details of interiors, village tableaux, and sea- and landscapes, Lixenberg created a nuanced and complex portrait of this close-knit community, a community balancing between a past rooted in tradition and an uncertain future.” 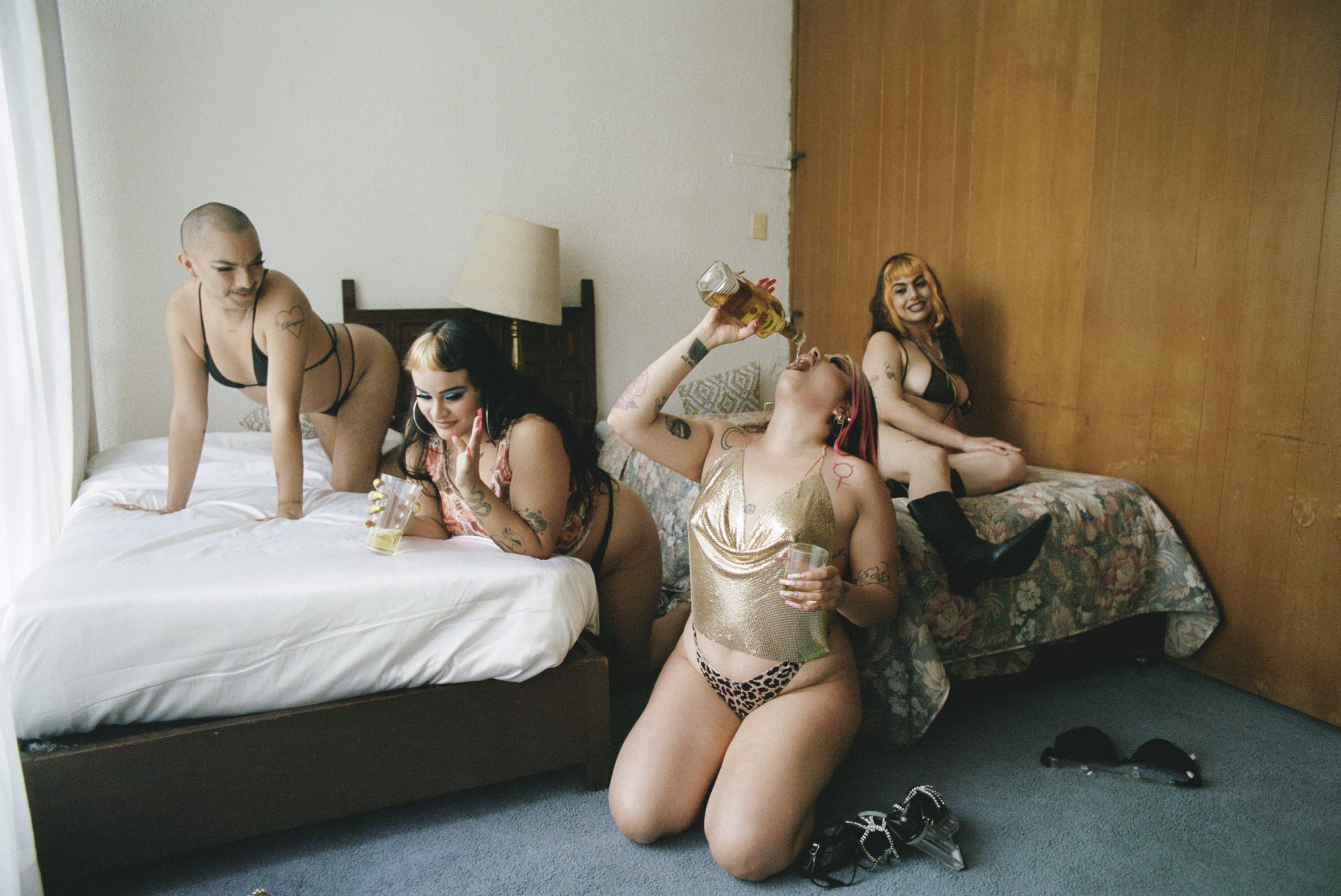 “This picture is part of a project I shot in Mexico City highlighting local artists working within the LGBTQ community. This day I spent with the group in a Mexico City home is especially memorable to me; it describes the power of friendship and having a community to express your racial, sexual, and political identities. The type of relationship they share is of a chosen family, where they can feel empowered in their own heritage through expressing cultural pride, collaboration, clothing, and creative language and rely on safety in the community. Before we took pictures, they did each other’s hair, makeup, and nails to what they describe as ‘glam chicana.’ ” 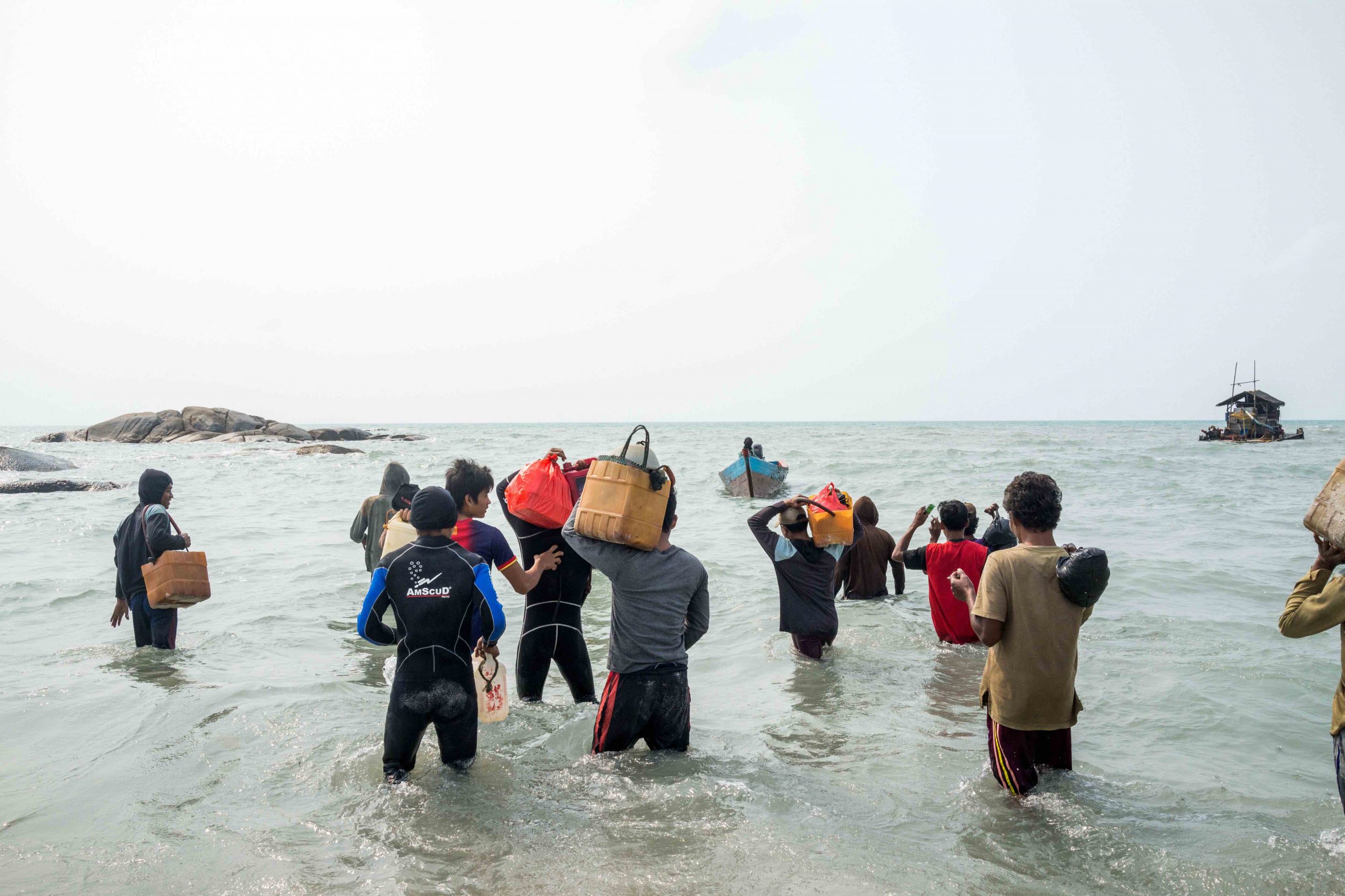 “Indonesian tin divers and miners on the island of Bangka – armed with their lunch and water to last the day – head out to sea to catch a boat that takes them about 3km off the coast to do the dangerous work that supplies the world’s solder wires for electronics such as smartphones, tablet computers like iPads, and flat-screen TVs.

They earn €6.50 a day for their work: diving to shove large plastic suction tubes into the sea bed to dredge for tin – a dangerous and archaic method. I shot these pictures in 2016, and wondered: when we buy our electronics, might we spare a thought for the cheap labour that goes into making them? What do we do in solidarity with these workers?”

Solidarity, the Magnum’s Square Print Sale, in support of NAACP and in collaboration with Vogue, runs from Monday, July 27, 9AM EST to Sunday, August 2, 6PM EST 2020. Signed or estate-stamped, museum-quality, 6×6” prints from over 100 visual artists will exceptionally be available for $100, for seven days only, from magnumphotos.com/shop.

Linkedin
RELATED ARTICLES
OTHER ARTICLES
The Egyptian government are continuing the repressive mistreatment of environmental campaigners.
Jamel Shabazz’s photos honour those who were lost and those who survived one of the most brutal eras in recent history.
After a devastating fire, creatives in the city are coming together to call for more affordable workspaces.
After being subject to racism growing up, Kavi Pujara’s photo series allowed him to reconnect with and reimagine his hometown.
The photographer reflects on a decade which saw the rise of MTV and the flourishing of new genres.
Shaunak Sen discusses his documentary chronicling an ad hoc hospital’s efforts to protect the city’s birds of prey.