Art & Culture / Photography / Swords, dragons & fire-eating: On tour with a US sideshow 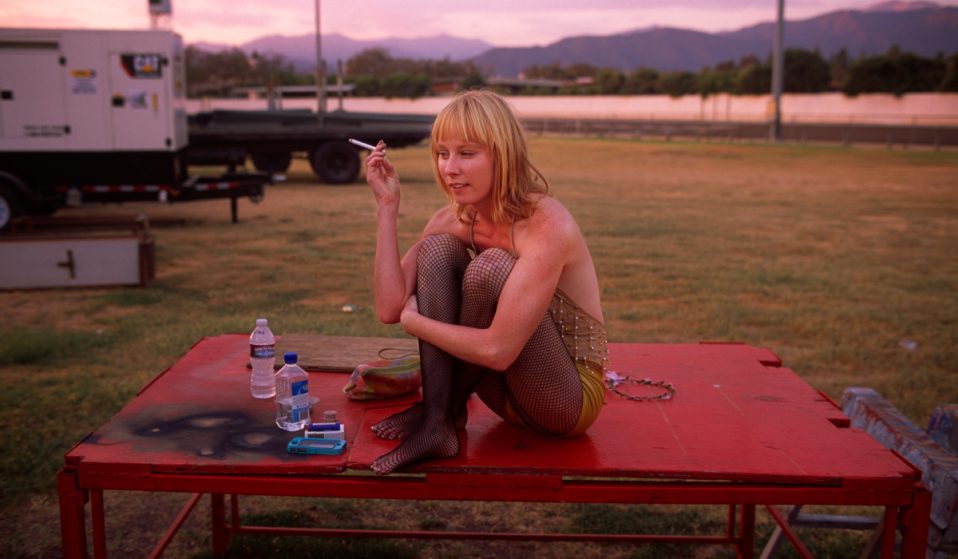 Photographer Cate Dingley spends time on the road with Ward Hall’s World of Wonders: the last ever touring sideshow in the country.

Photographer Cate Dingley spends time on the road with Ward Hall’s World of Wonders: the last ever touring sideshow in the country.

“The doors are open now, it’s showtime right away,” shouts the talker, the Great Gozleone. He is sweet-talking passerby from his place on a plinth outside the tent with a vivid hand-painted banner line on either side advertising the show’s spectacles.

“First time ever here at the fair, you’re gonna love it – The World of Wonders, where the wonders are and the oddities entertain you. The strange, the odd and the unusual, you’ll even see in here today a girl who dances in her bare feet on razor-sharp steel swords. You’re going to see in here today strange and unusual creatures, like the two-headed cow and the Alabama leprechaun…”

Before people could view the bizarre from the safe glow of their cell phone, they would find it at sideshows. Traditionally known as “freak shows,” these touring events were similar to circuses, offering audiences a variety of different and fantastical displays. Viewers would attend to watch performances, such as the sword swallower or the human pin-cushion. They also would gawk at ”human oddities,” such as giants, tattooed women and “half-men.” 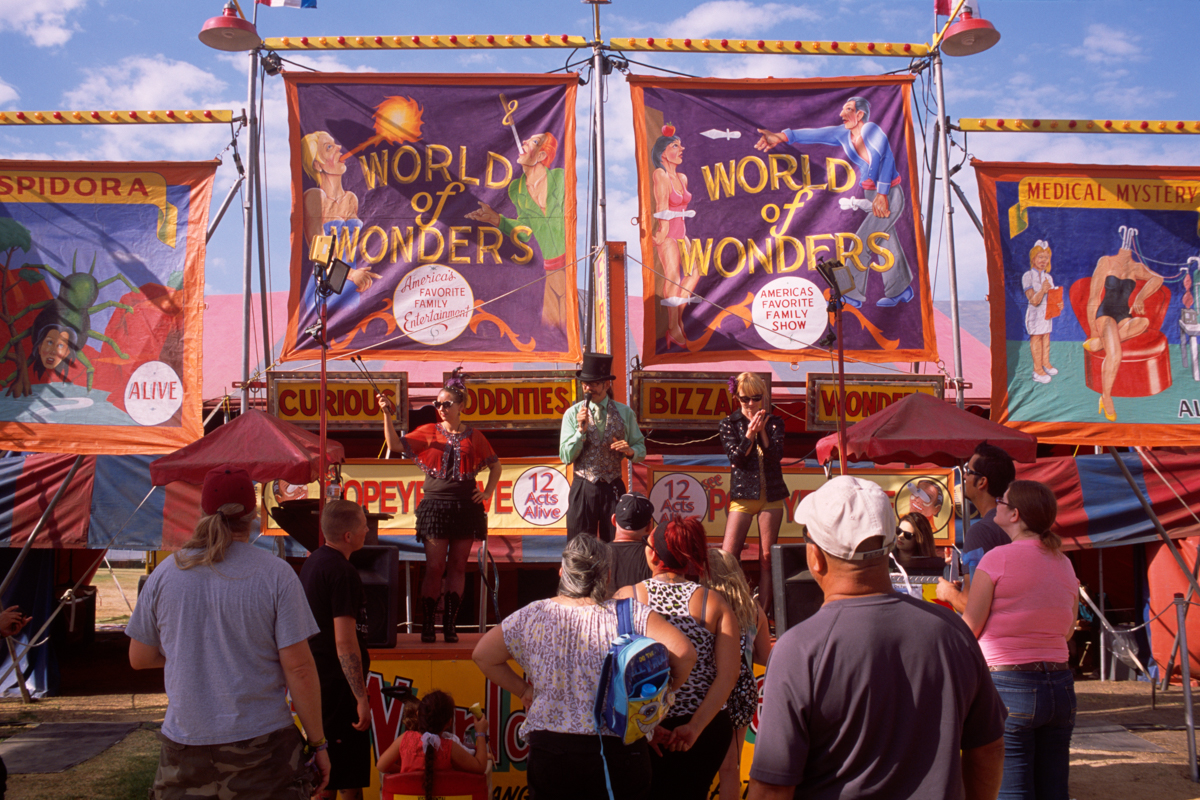 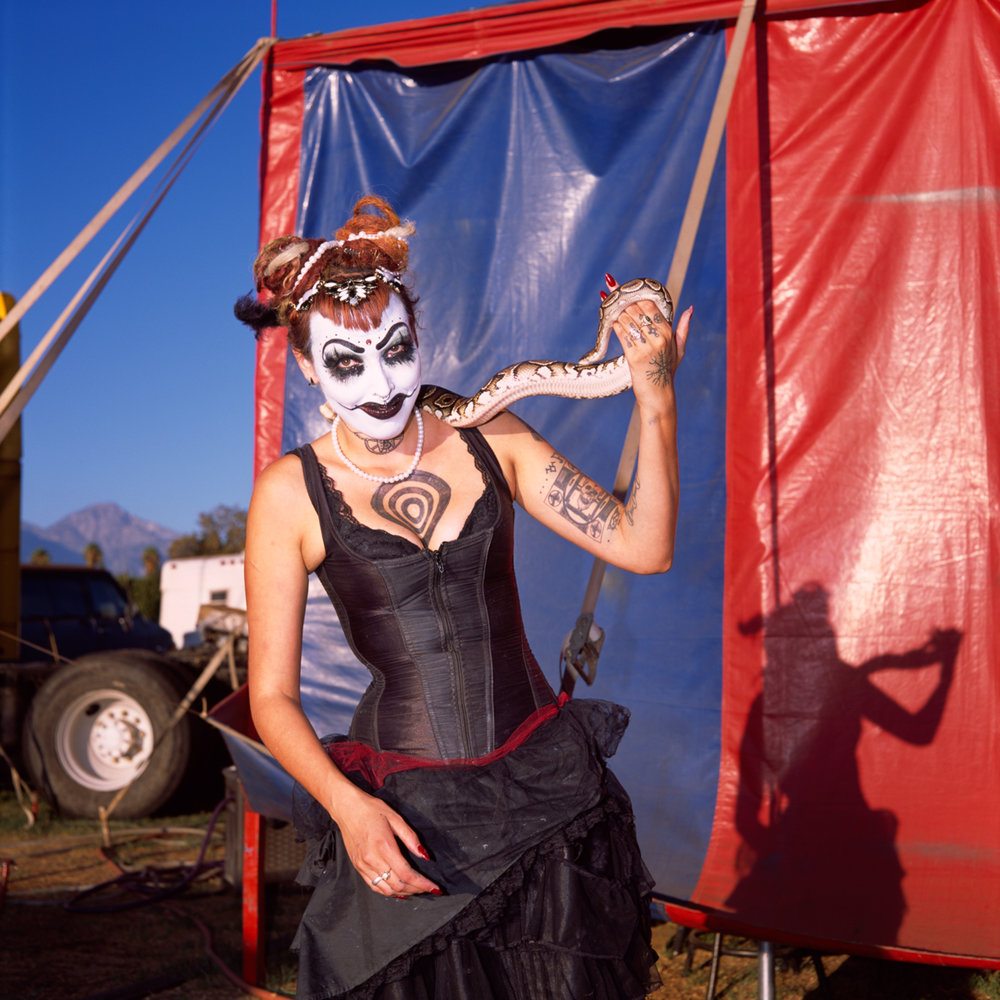 While the circus is an old European tradition, the sideshow is pure Americana. Founded in 1841 in New York City, it was invented by P.T. Barnum, who is often credited for the phrase “a sucker is born every minute.” Whether he said it or not, it’s doubtless he believed it, as he made his fortune touring “freaks” and exhibiting (often hoax) oddities throughout the United States. For decades, countless sideshows struck out to join state fairs or a touring circus, following the dusty roads to the next dollar.

While a few permanent sideshows remain, such as the one at Coney Island, Brooklyn, there is just one travelling sideshow left: Ward Hall’s World of Wonders.

Controversially, the World of Wonders still includes “human oddities” in its lineup. But while in Barnum’s time many of these people were mistreated, even bought and sold, the freaks of today’s shows have embraced the term and take pleasure in shocking their audience. Shellshock, whose condition allows him to pop his eyeballs out of their sockets at will, gleefully brags that he’s made people faint. Anyone who wants to perform in the sideshow will find a place at the World of Wonders.

Many sideshow performers left home at a young age, drawn to the idea of an unconventional life. The Great Gozleone, now the manager of the World of Wonders, tells me that he always dreamed of “running away to the circus.”

“I thought, ‘I bet I could learn how to be a sword swallower.’ And then it consumed every minute of my days,” he says. “I taught myself and it took me at least three years. Then I saw an ad for Ward Hall’s World Of Wonders. I’d heard of them – that was the real deal, that’s what I wanted. I quit my job, gave up my apartment, and joined the show.” 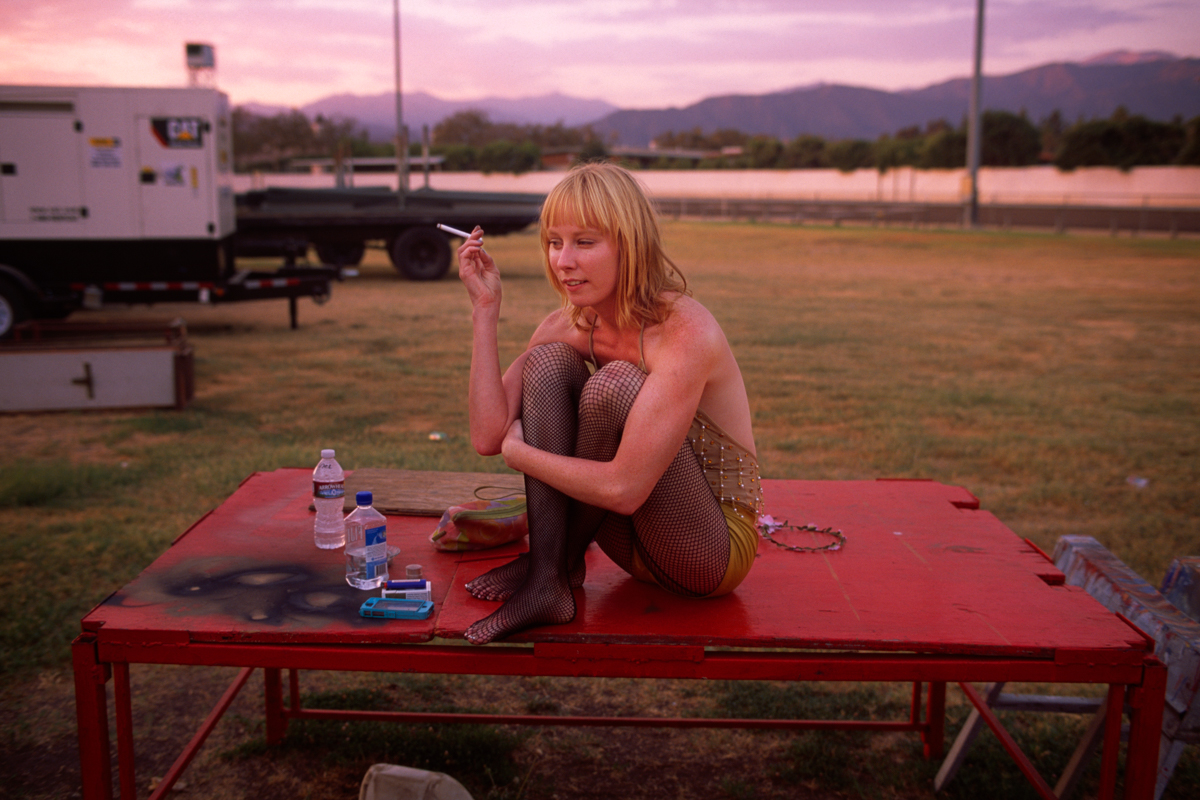 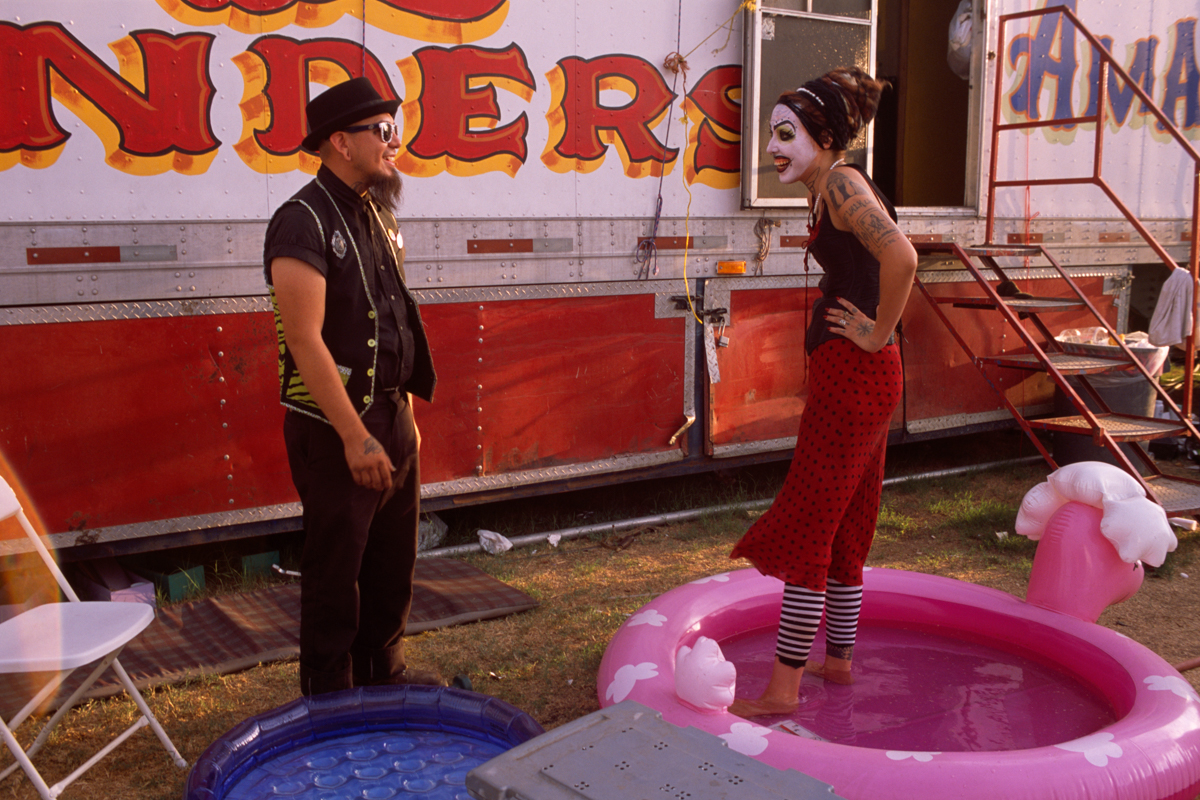 The Great Gozleone, his flashy name borrowed from a wrestler friend, was looking for adventure and he found it. Responsible for booking the tours and talent in his managerial position at the sideshow, he also enjoys getting dressed up as a “fancy weirdo”, performing illusions, and sword-swallowing.

John “Red” Stuart, a world record-holding sword swallower who works alongside The Great Gozleone, had a similar idea. He left his hometown of Philadelphia for New Orleans at 15, where he found a job working fairground rides during Mardi Gras. During one night of partying, he met a woman who owned a small sideshow, who promised him a life eating fire, driving nails into his head and dancing in hot coals. He said yes.

That was in 1967, and Red has been in the sideshow ever since. As well as learning to swallow swords, Red overcame his fear of reptiles by becoming handler of a reptile show, even developing a special relationship with the Komodo dragon: “Haasoo was her name,” he remembers, fondly. “I used to take her for walks up and down the midway with her harness – she was leash-trained, spoiled rotten. She would crawl down my sleeping bag, climb out of the bag, come out, rest her body on my belly.” 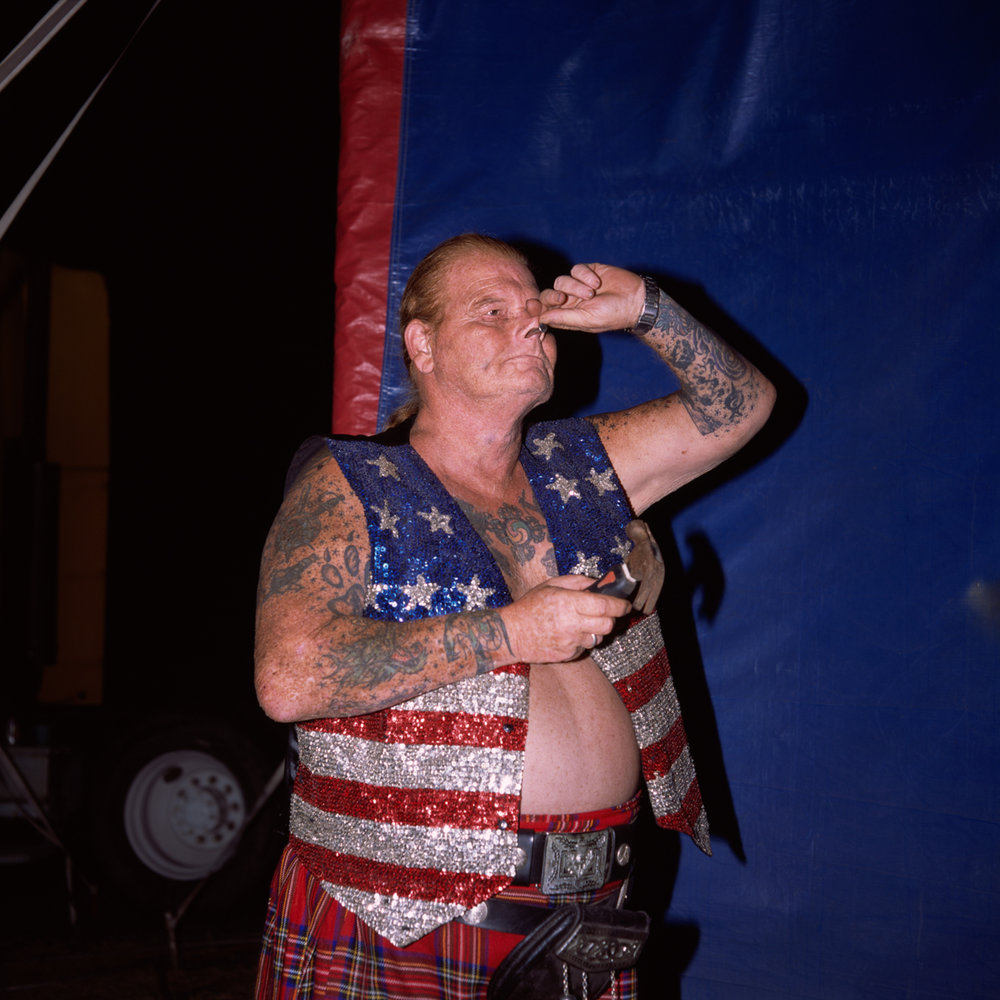 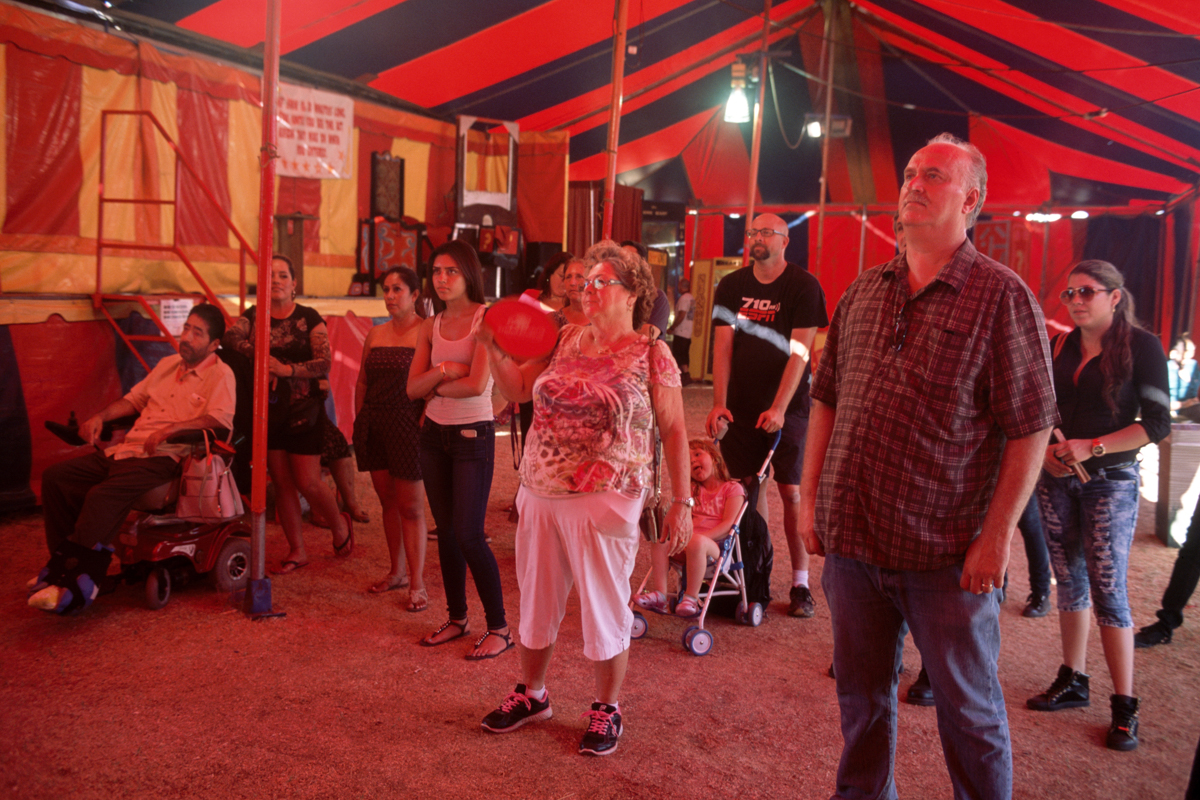 Another member of the troupe is Trixie Turvy, who came to the sideshow for a week to substitute for a friend doing hula-hooping. However, she ended up staying for over four years and is still on the road. “I loved travelling and I always did,” she tells me. “It’s nice to have a job where that’s built in. I show up to do my job and I’m in a new state that I’ve never been to.”

Now she’s learned how to eat fire, throw knives, lasso, do various illusions, and also supervises and plans the other acts in the show. She says she’ll stay as long as she still loves it, but with the sideshow’s transience comes many difficulties. Cooking, cleaning, and doing laundry require huge amounts of time and effort because of their simple living quarters. “Everything is a chore here,” Trixie says, “because we live in a tractor trailer.”

All the performers agree that life in the World of Wonders requires true dedication. They live without many basic amenities such as air conditioning, heat, or running water; but they have electricity so they can light up the tent and perform late into the evening.

There’s little privacy too, which leads to the usual riffs of cramped quarters, but also to intensely loyal friendships and love affairs. The troupe’s days are physically gruelling, as they are responsible not only for performing, but also for setting up the tent, stage, and props, as well as hauling the equipment from town to town.

The world has changed since Ward Hall began his World of Wonders show in the 1940s, and as a result, it is the last touring show of its kind. It represents a piece of American culture that is irreplaceable, even if, because of technology and changing tastes, the sideshow is no longer as popular as it once was. But “the strangest show on earth” will always have a universal appeal. As Red says with the authority of over 50 years in the business: “People always want to know the unknown – and they want to see what they fear.” 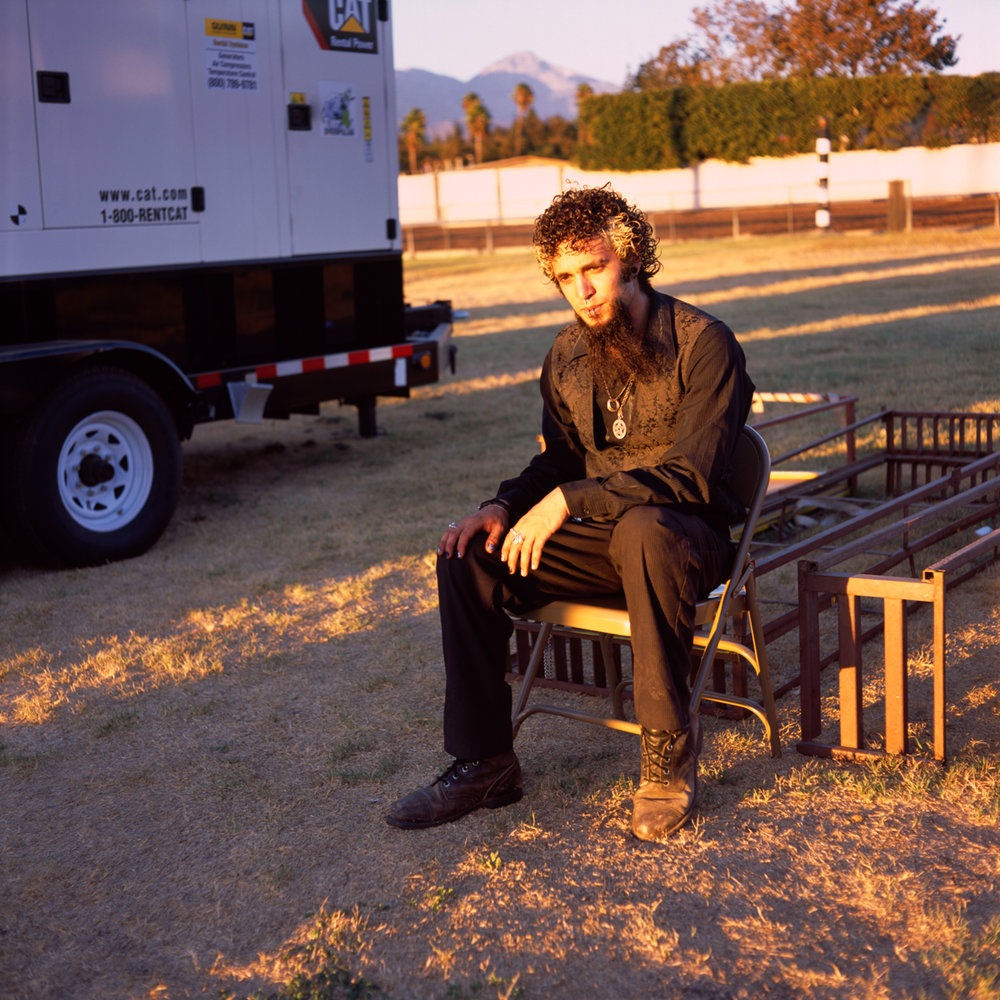 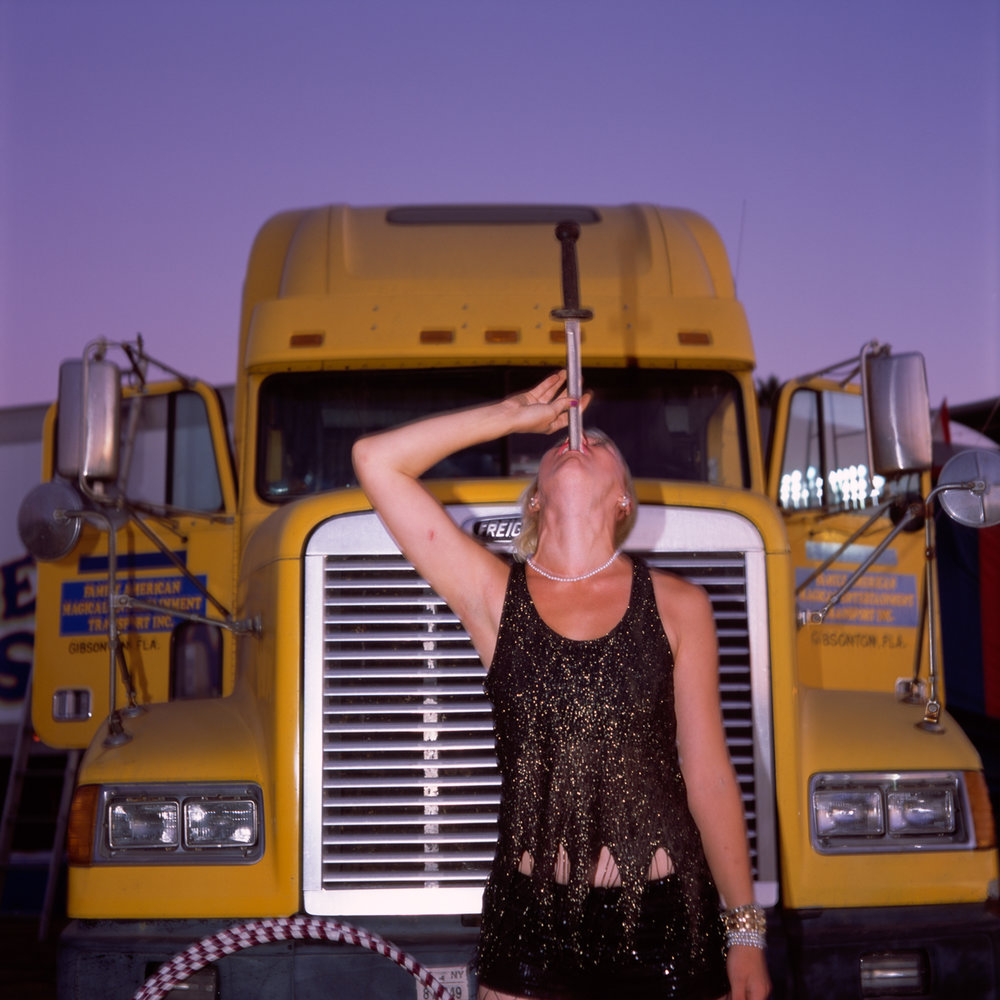 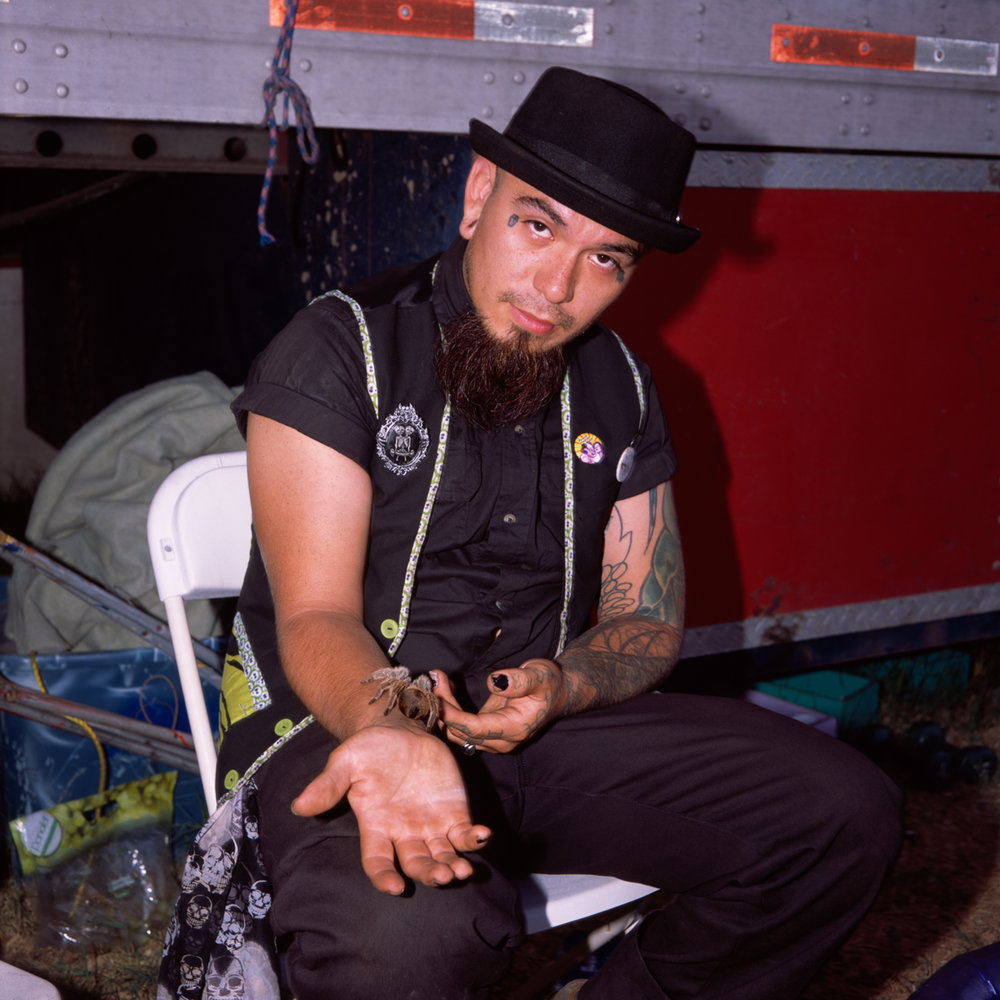 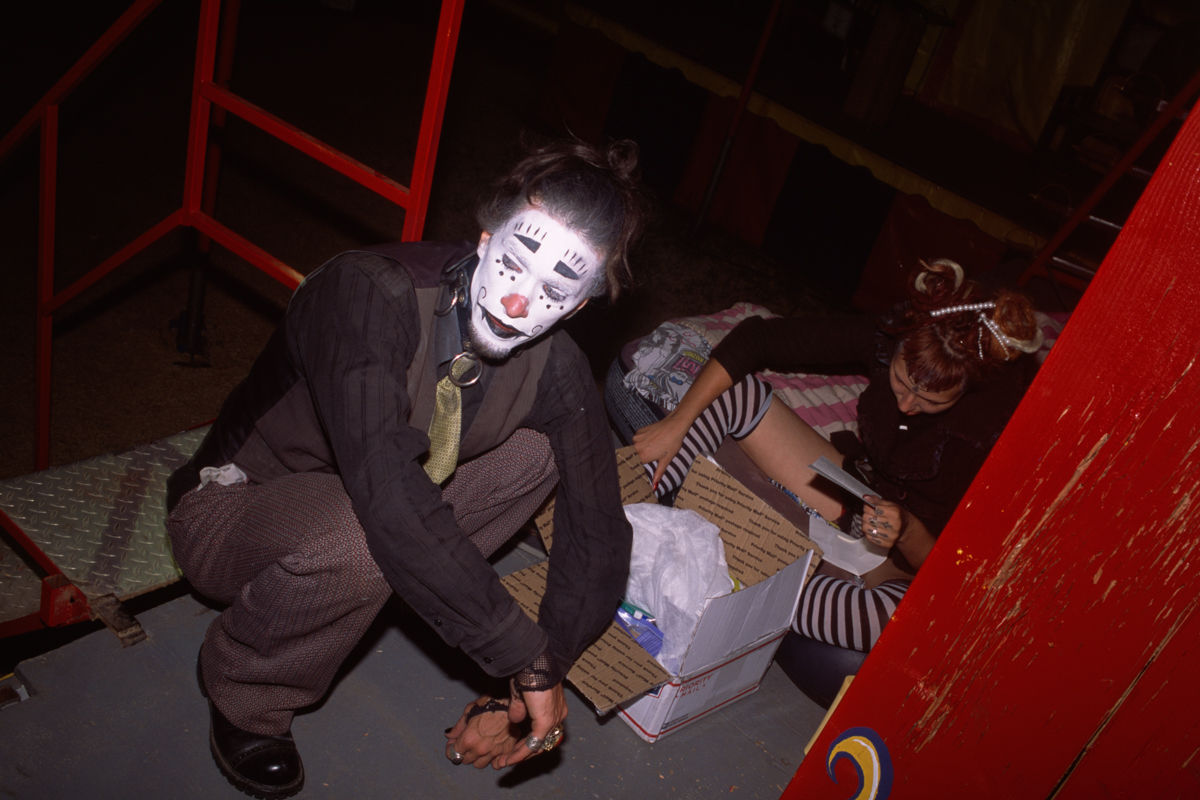 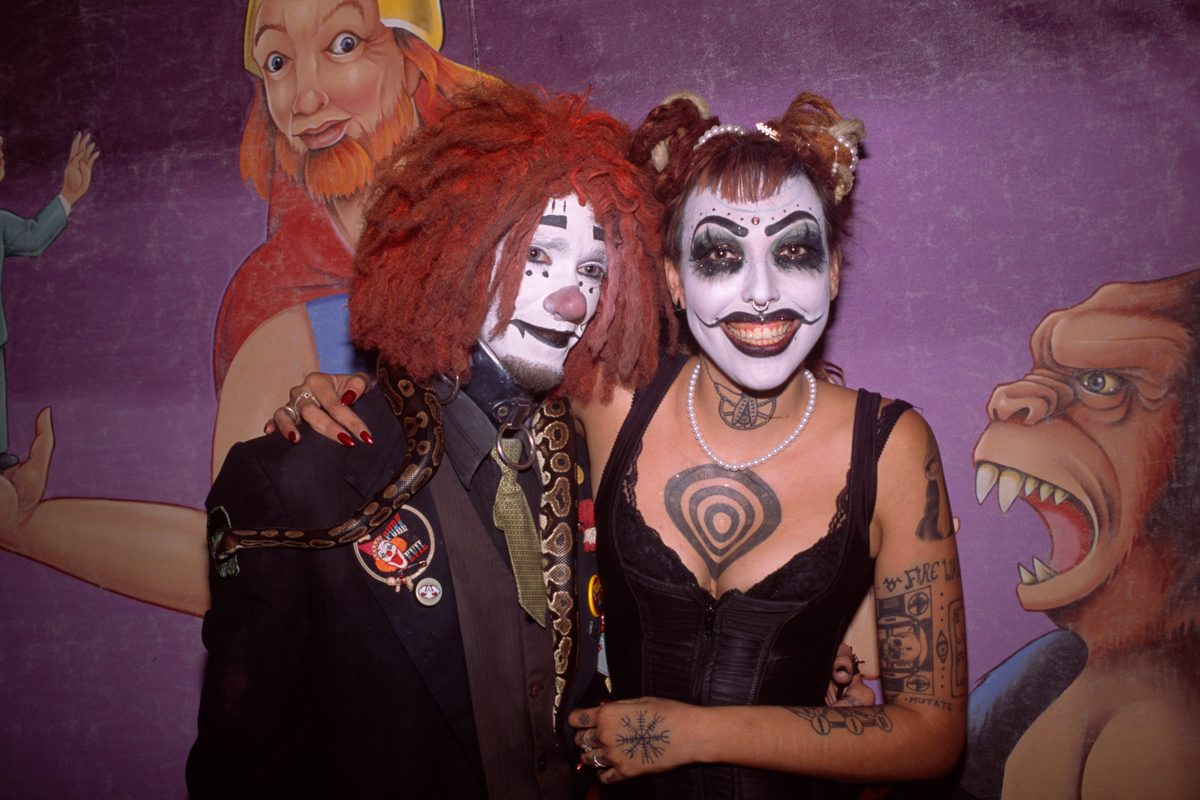 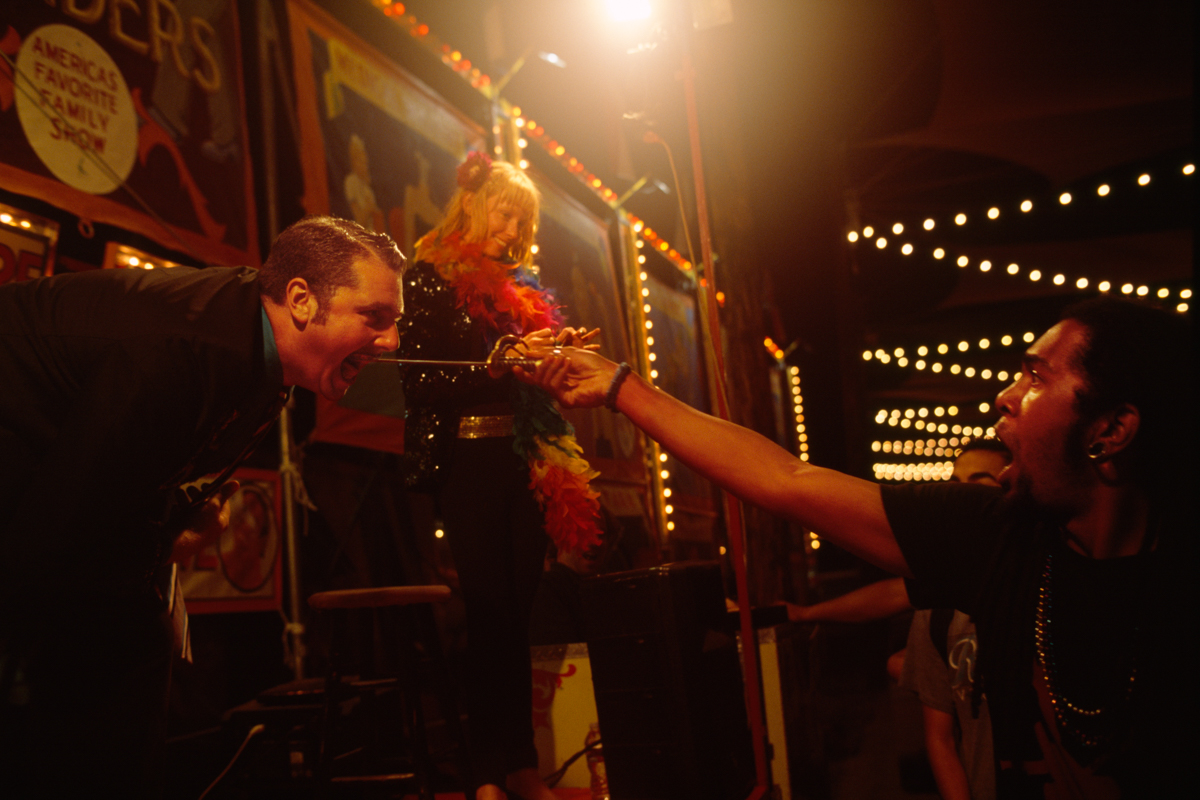 Linkedin
RELATED ARTICLES
OTHER ARTICLES
To mark the premiere of his new documentary on surfing giant Gerry Lopez, the filmmaker and former pro skateboarder sits down to share his unique brand of wisdom.
With the virus now a global health emergency, we must take steps to fight misinformation and demand a swift UK-wide vaccine roll out, writes Phil Samba.
A woman from Texas explains how she was forced to consider the criminal liability she might face for medication abortion over her health.
Steel City is often overlooked when it comes to the country's cultural radar despite its role in shaping electronic music.
Protestors gathered outside Downing Street following the latest atrocities committed by Israel against Palestinians living in the besieged strip.
Photojournalist Fiora Garenzi spoke with people still living in Eastern Ukraine, an area which seen some of the heaviest fighting since the war began.