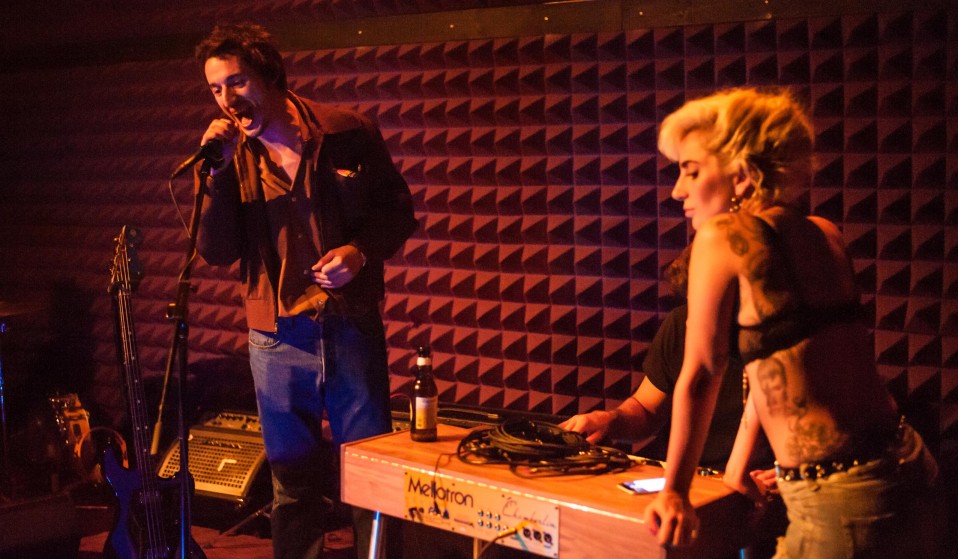 This photography student asked if he could shoot one of the most unpredictable groups in the world... only to be welcomed into a world of organised chaos.

Photography student Alec Castillo asked if he could shoot one of the most unpredictable groups in the world: London's Fat White Family. But when they let him join their US tour, the experience proved a lot more than he bargained for.

Earlier this year, I started pitching ideas to bands I admire. The hope was that I could photograph a stretch of their tour if they came through the eastern parts of the US – but it would have to be before the summer, when my band the Nude Party would be heading out on a tour of our own.

I needed the experience to shoot as an outsider looking in. Almost everything I photograph is about familiarity with people who are close to me. I’m generally a shy person until I get to know someone and trust them. 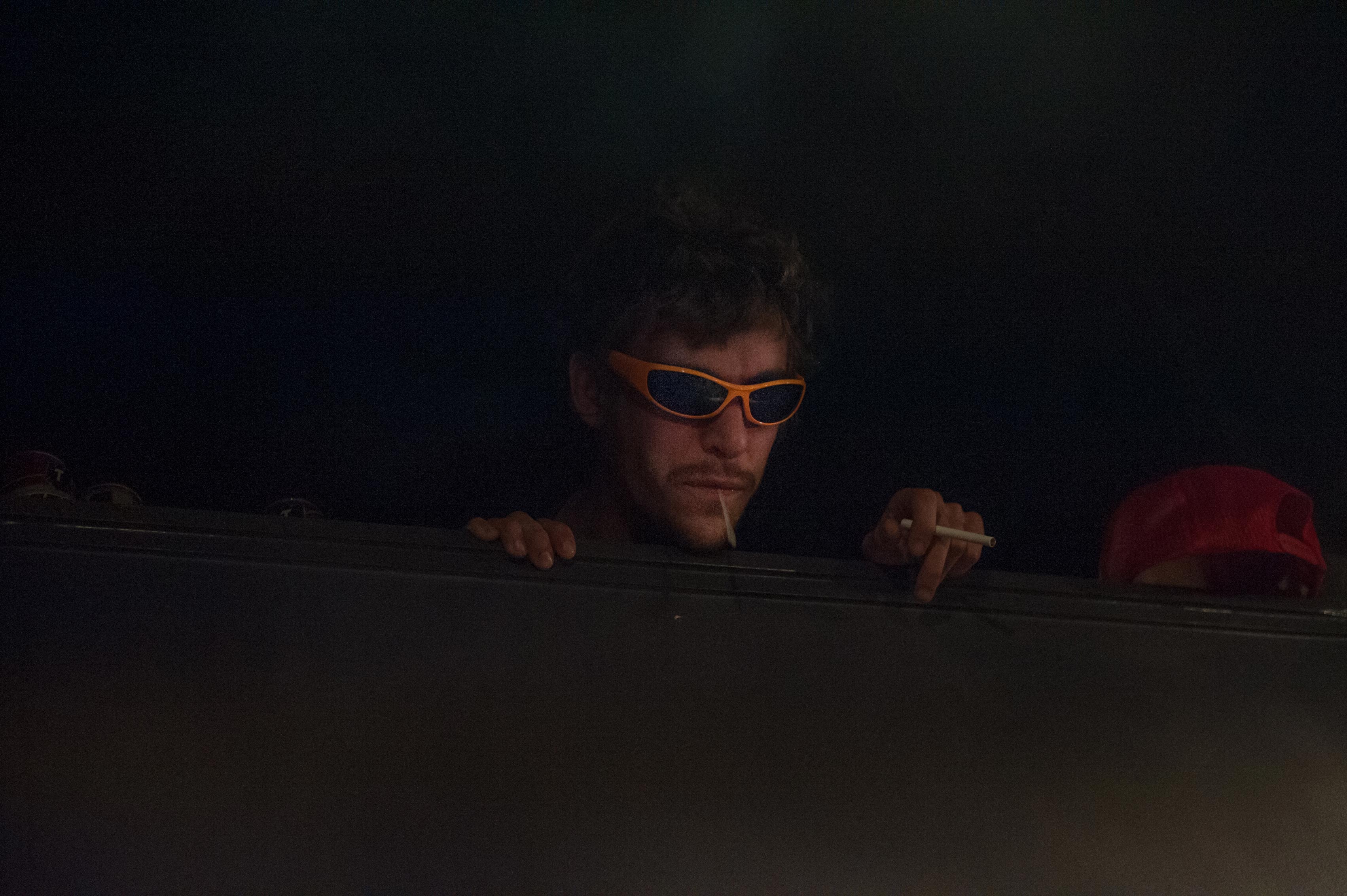 Saul Adamczewski, guitarist, peers out from the loft of a greenroom, Washington DC.

First interactions also make me extremely anxious. Following a band on the road would help me step out of my comfort zone and prove to myself that I could shoot people I don’t know, getting close in a small amount of time.

Fat White Family’s publicist, Jo Murray, responded almost immediately. I could follow the band, a raucous rock six-piece from London, for four days if I paid my own way. 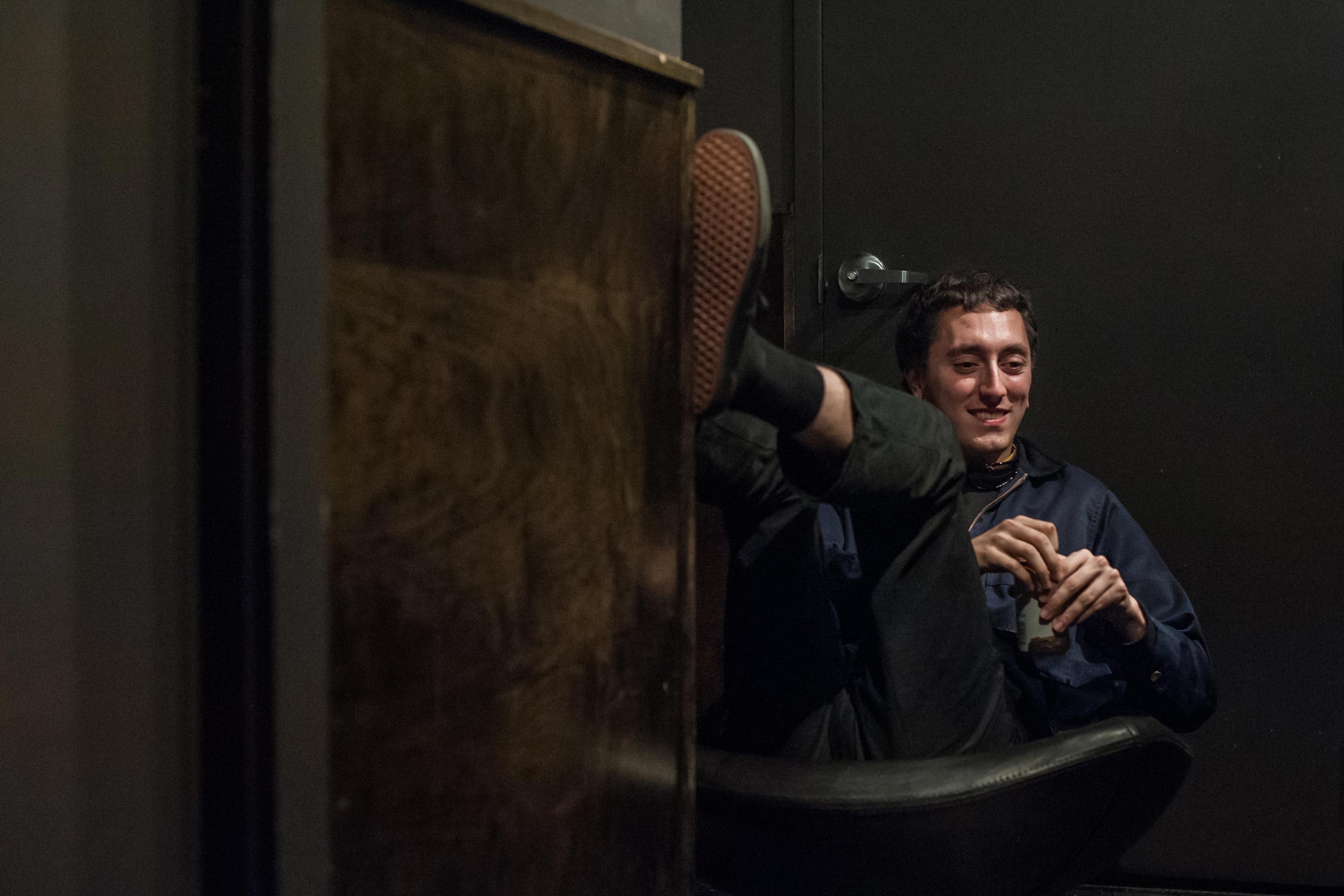 Although the tour would be the week before my final exams (I study photography at Appalachian State University in North Carolina), it kind of felt like my calling. What better first band to shoot than Fat White Family?

I sold some photo prints to fund my trip, packed my skateboard and clothes, then laid down some memory foam in the back of my car in case I couldn’t find anywhere to sleep. 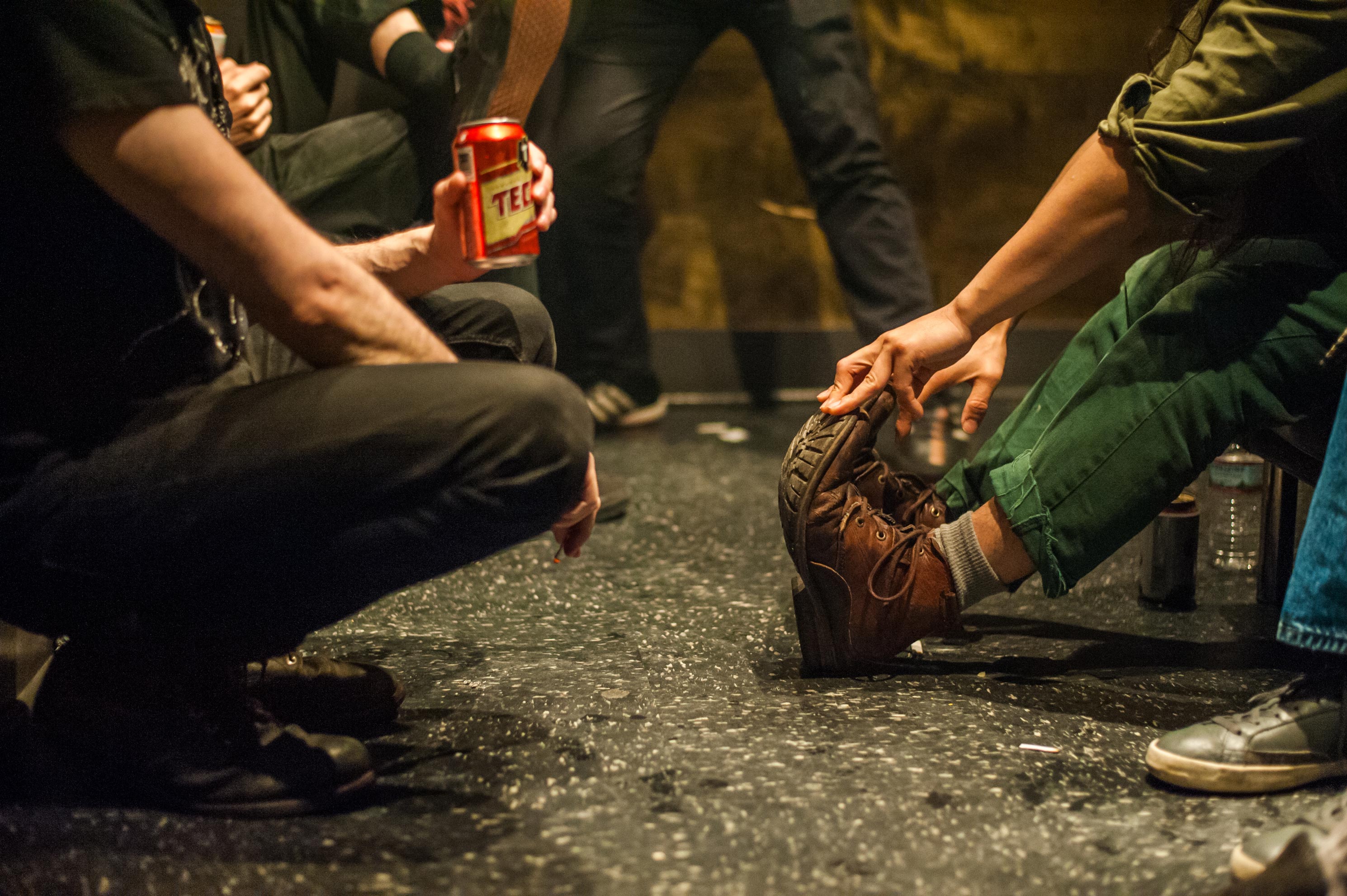 I made the drive down from Boone, North Carolina to U Street Music Hall in Washington, DC, and nervously stood outside the greenroom waiting for the right moment to go in and introduce myself.

I spotted Lias, the band’s lead singer, at the bar and so I approached him to tell him what my intentions were: to shoot an intimate behind-the-scenes story of their band. 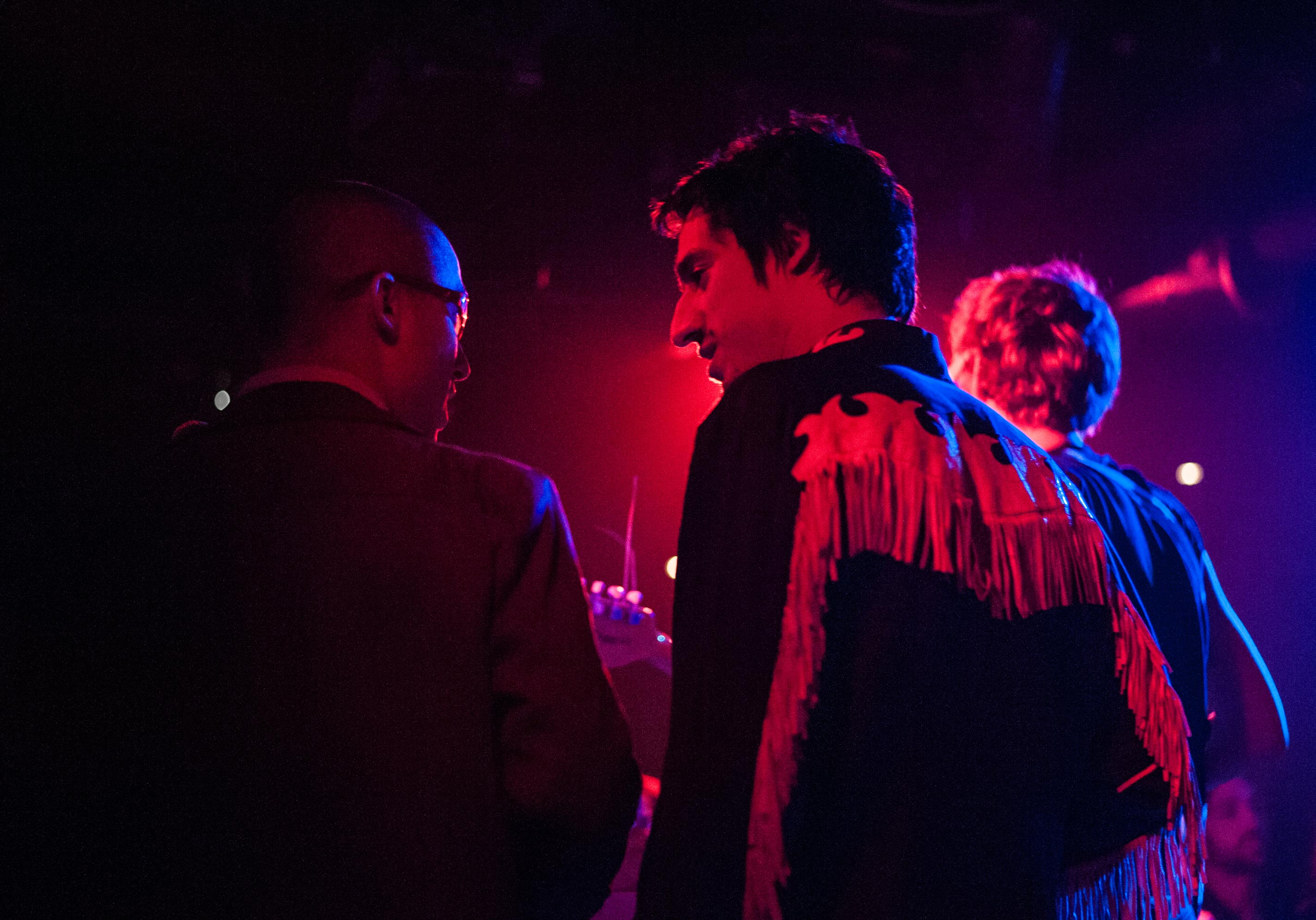 He had me follow him backstage to meet the rest of the group. Most of them had no idea about the arrangement and I told them that if there was ever a time they didn’t want me shooting or they just needed space, they could tell me to fuck off.

Saul Adamczewski, the guitarist, explained from a small crevice in the greenroom loft that they were used to having cameras in their face and it didn’t bother them. 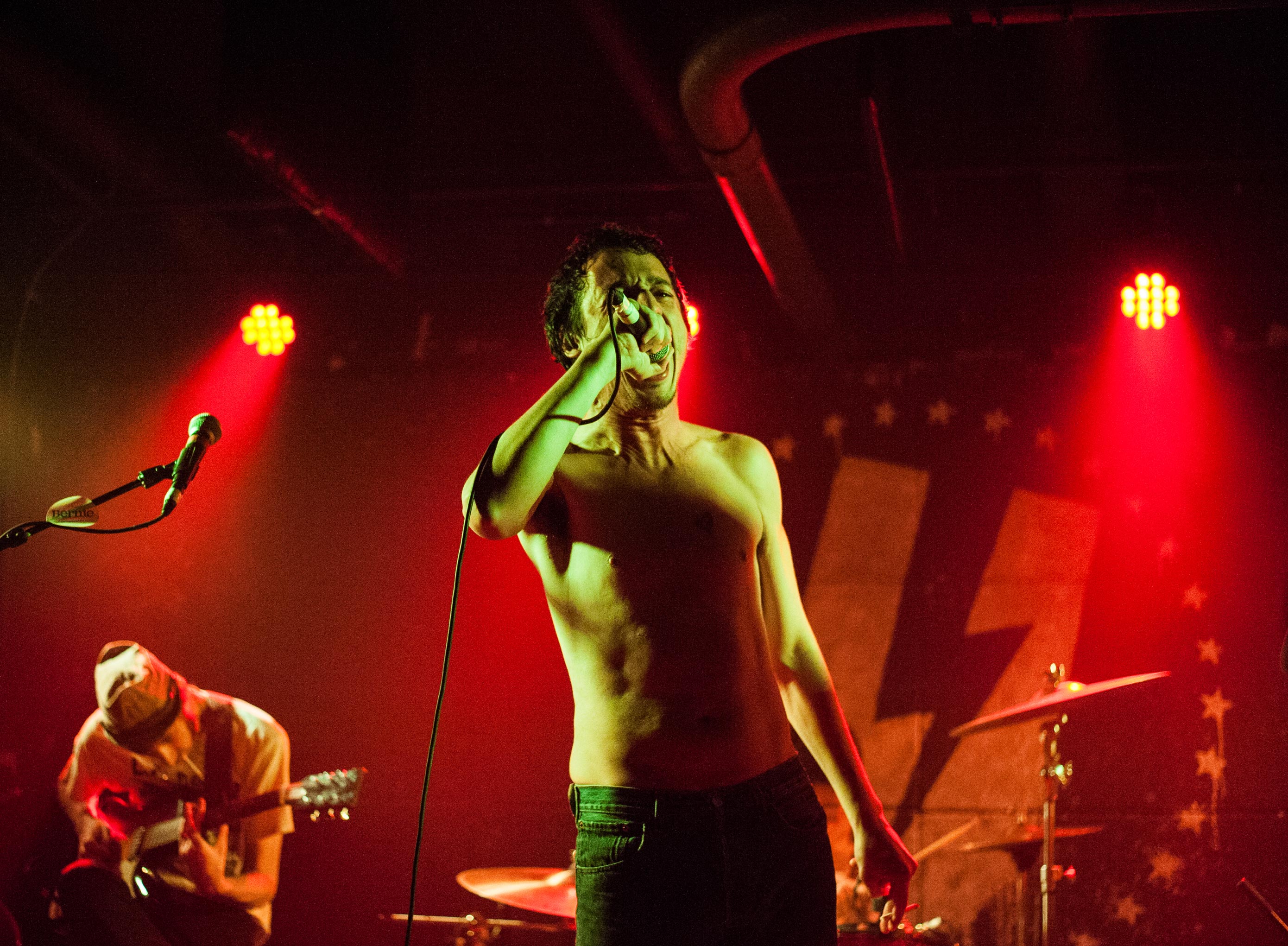 When I was researching articles about Fat White Family I had heard about their reputation of being difficult with other journalists.

That had been intimidating to think about ahead of time but, in person, they were all pleasant and welcoming. Plus, shooting my band on the road created an element of familiarity which helped frame my thought process. 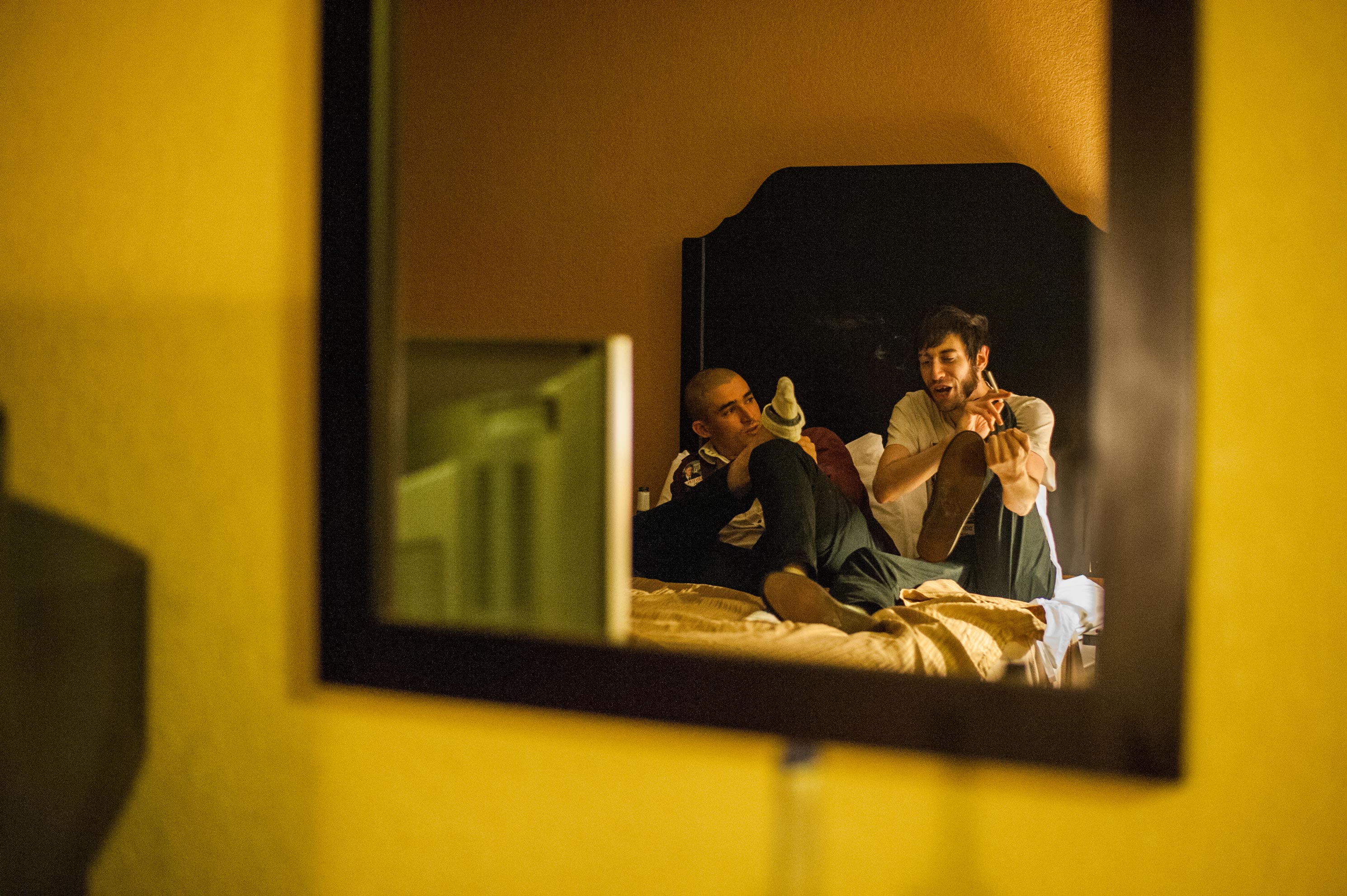 After gaining some trust in the greenroom, I started shooting. Backstage is where a lot of emotion gets released.

Some people are nervous before shows and need their space; some people drink alcohol and do drugs to get loose; some people like to hang out with friends and fans. I saw a bit of everything. 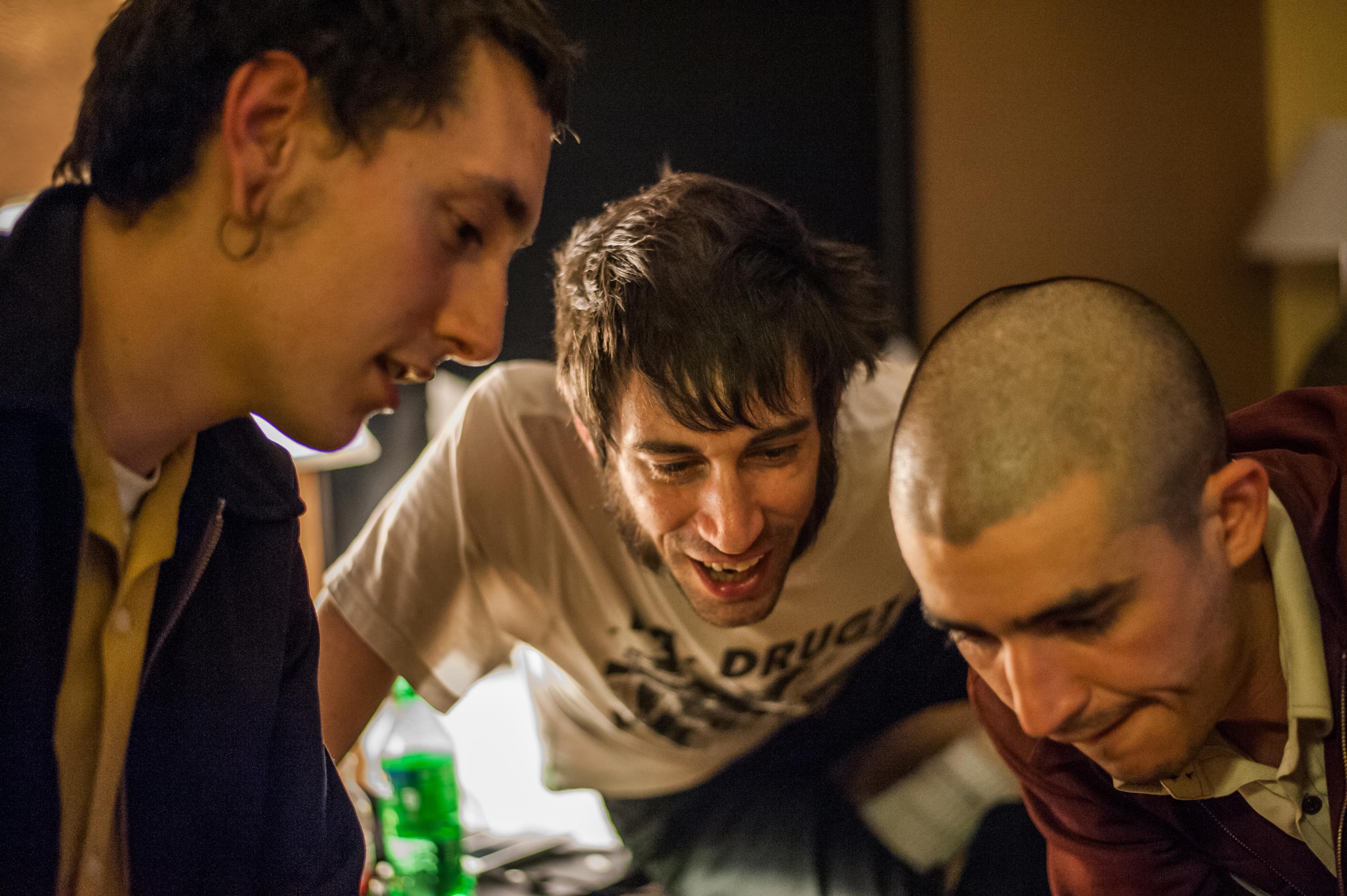 The greenrooms were always packed with friends and fans and Fat White Family always seemed to enjoy the company.

There were several times where the band would be asked to be interviewed or photographed right before they were about to play, but they were always willing. 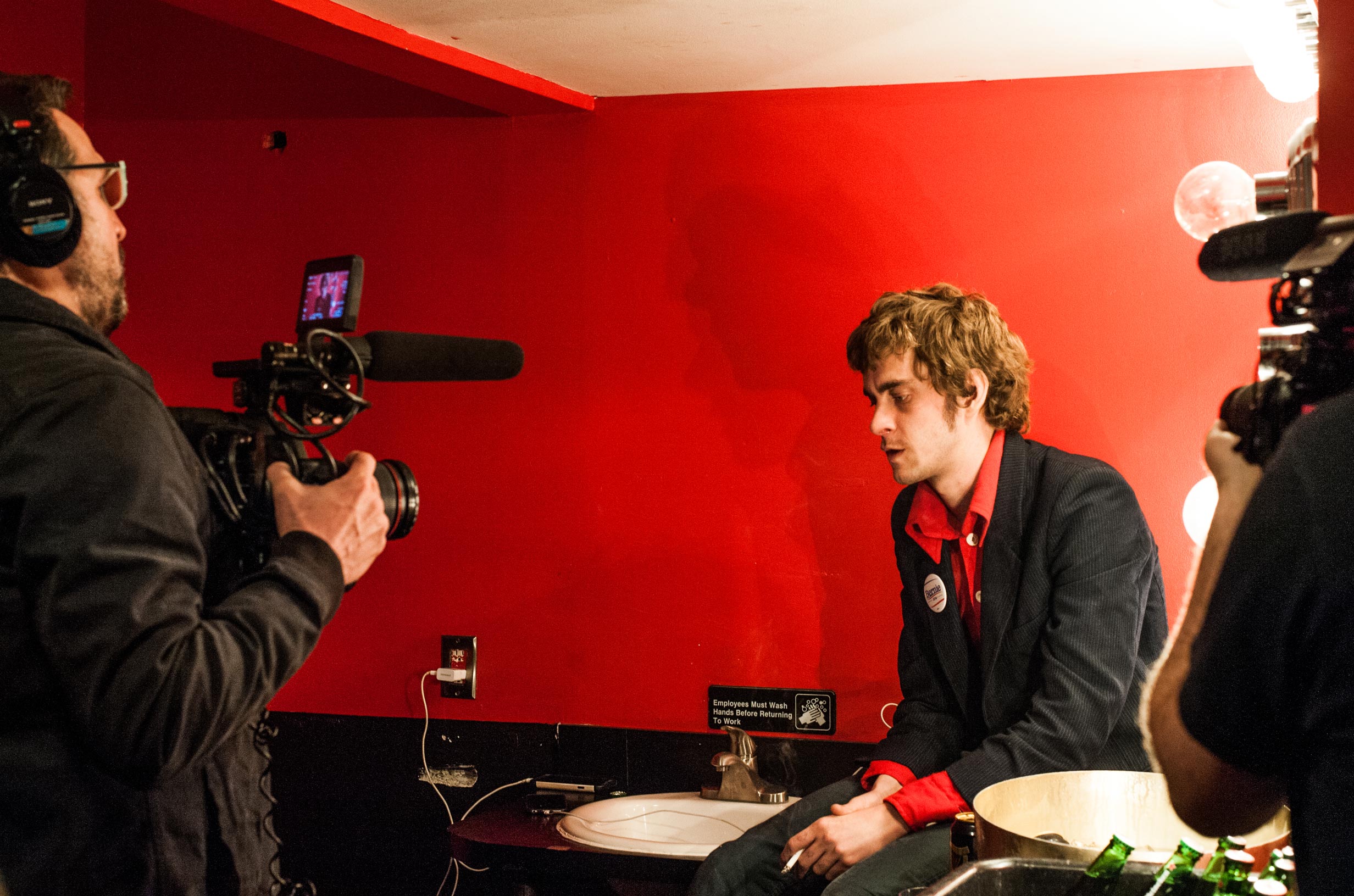 Fat White Family is one of the most charismatic bands I’ve seen live. I’d never shot a concert before and I took a jab at capturing the shows every night. There’s a strange dichotomy between how a band acts on stage and off the stage.

After the show is over, they’re tame and chill for the most part. They leave that presence on stage and pick it back up the next night for a new show. That difference was exciting to recognise. 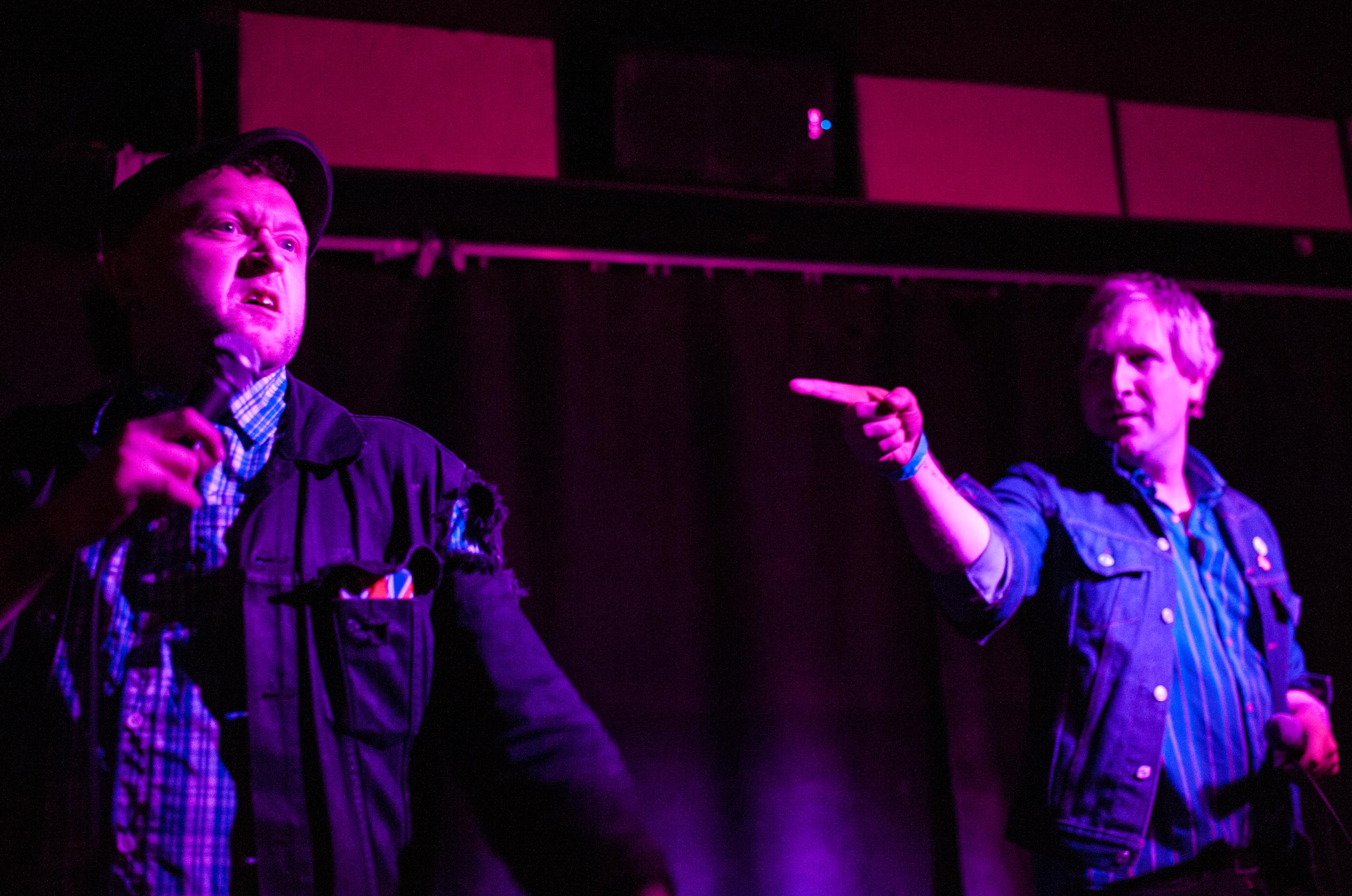 Road managers Pete and Justin at a karaoke bar.

After the show in DC, the next three days were in New York: one at the WFMU record fair, the next night at Baby’s All Right in Brooklyn, and the last show at Le Poisson Rouge in Manhattan.

All of the shows were packed out. 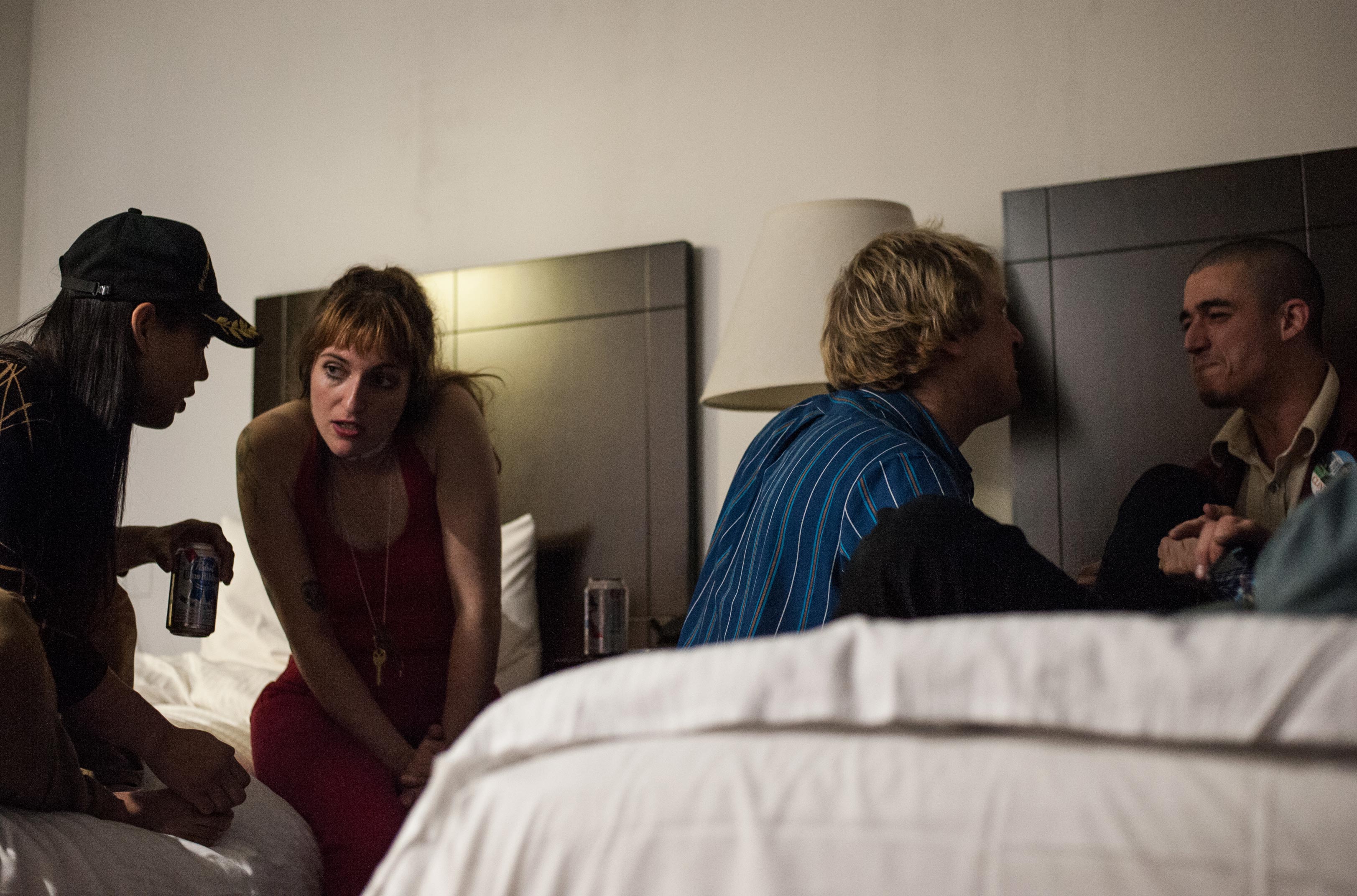 I would try to stick with the band every chance I got whether they were going out to dinner, going out to a bar, or going back to pass out at the hotel.

Several times I would drive them from Brooklyn to Manhattan and vice versa when bar hopping. 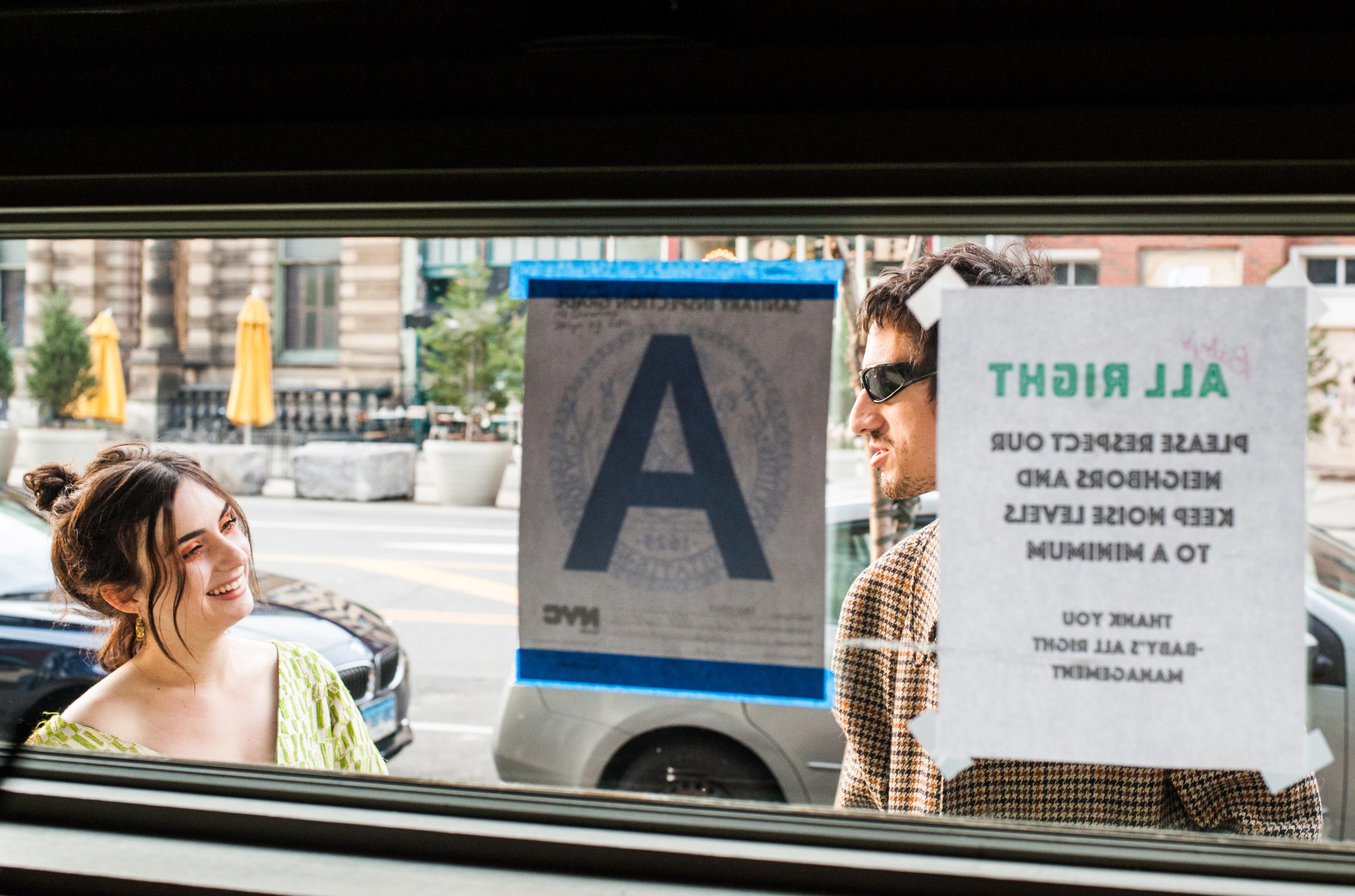 This allowed me to stay with them as much as possible and see their night colours come out.

One night we went to a karaoke bar and the road managers, Pete and Justin, stole the show.

After bar hopping, we would go back to the hotel and stay up to 8 am. 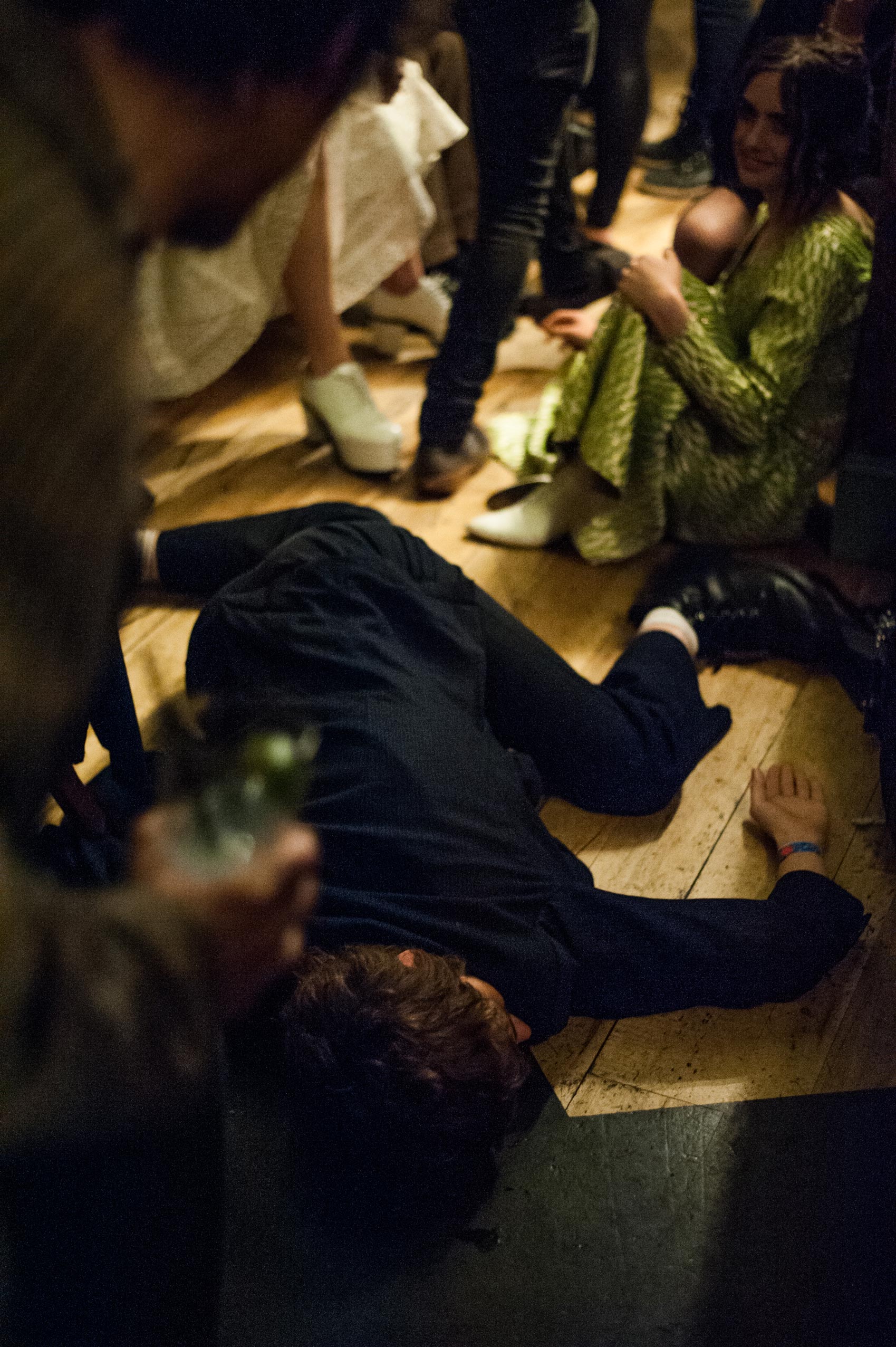 This is usually when I would become a fly on the wall and shoot the late night interaction.

New York City truly doesn’t sleep. But we’d wake back up around noon and head towards the next venue and do it all over again. 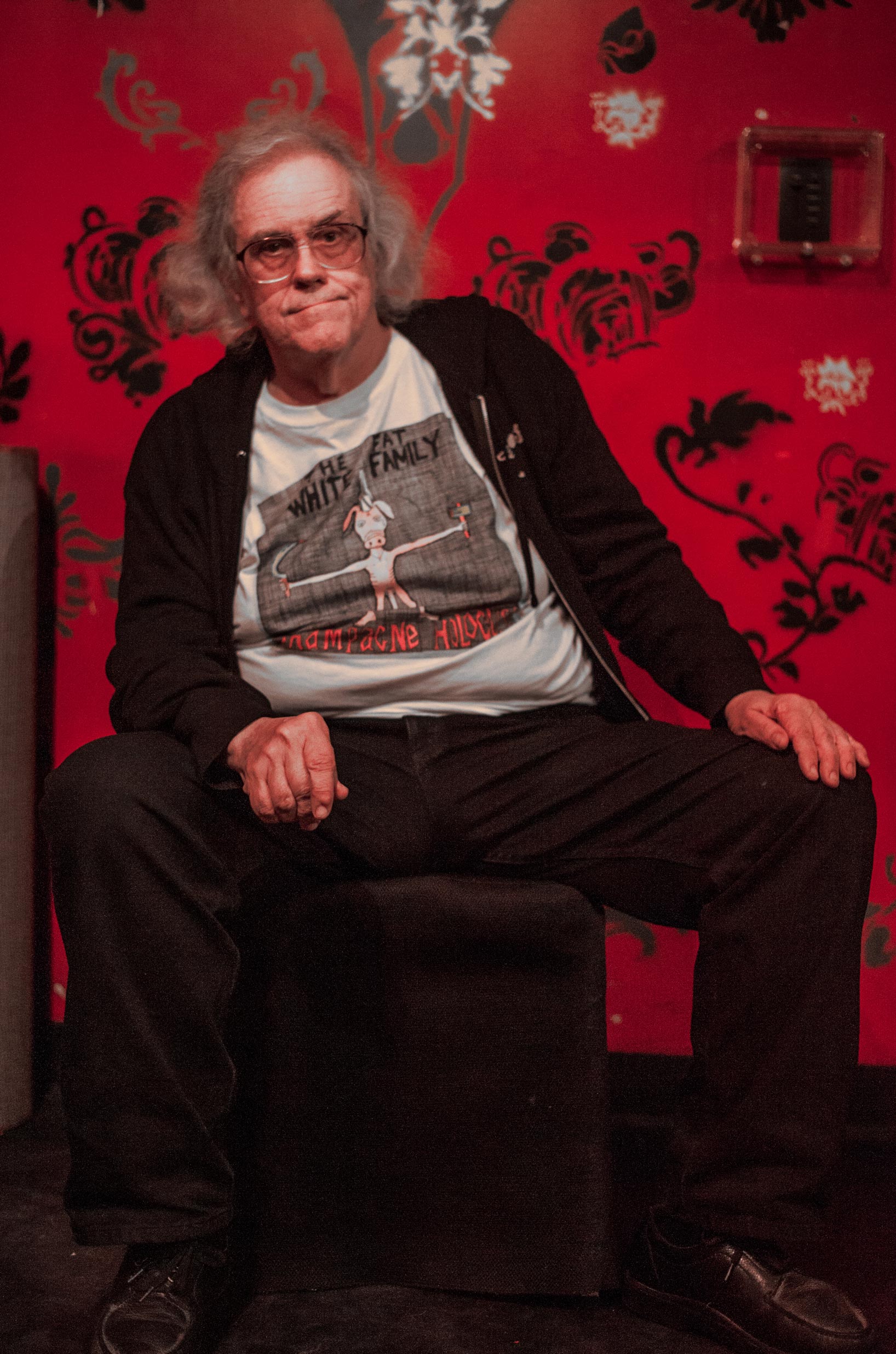 This is Dennis. He has been to almost every Fat White Family show in New York. I tried to meet a lot of the fans but this story was unique.

Dennis and his other half, Lois, have dedicated their lives to rock and roll, touring with bands and selling merch for free just to be part of the experience.

In the past, they’ve befriended bands such as The Ramones and Blondie. And when UK rock bands come through NY, they often host them. 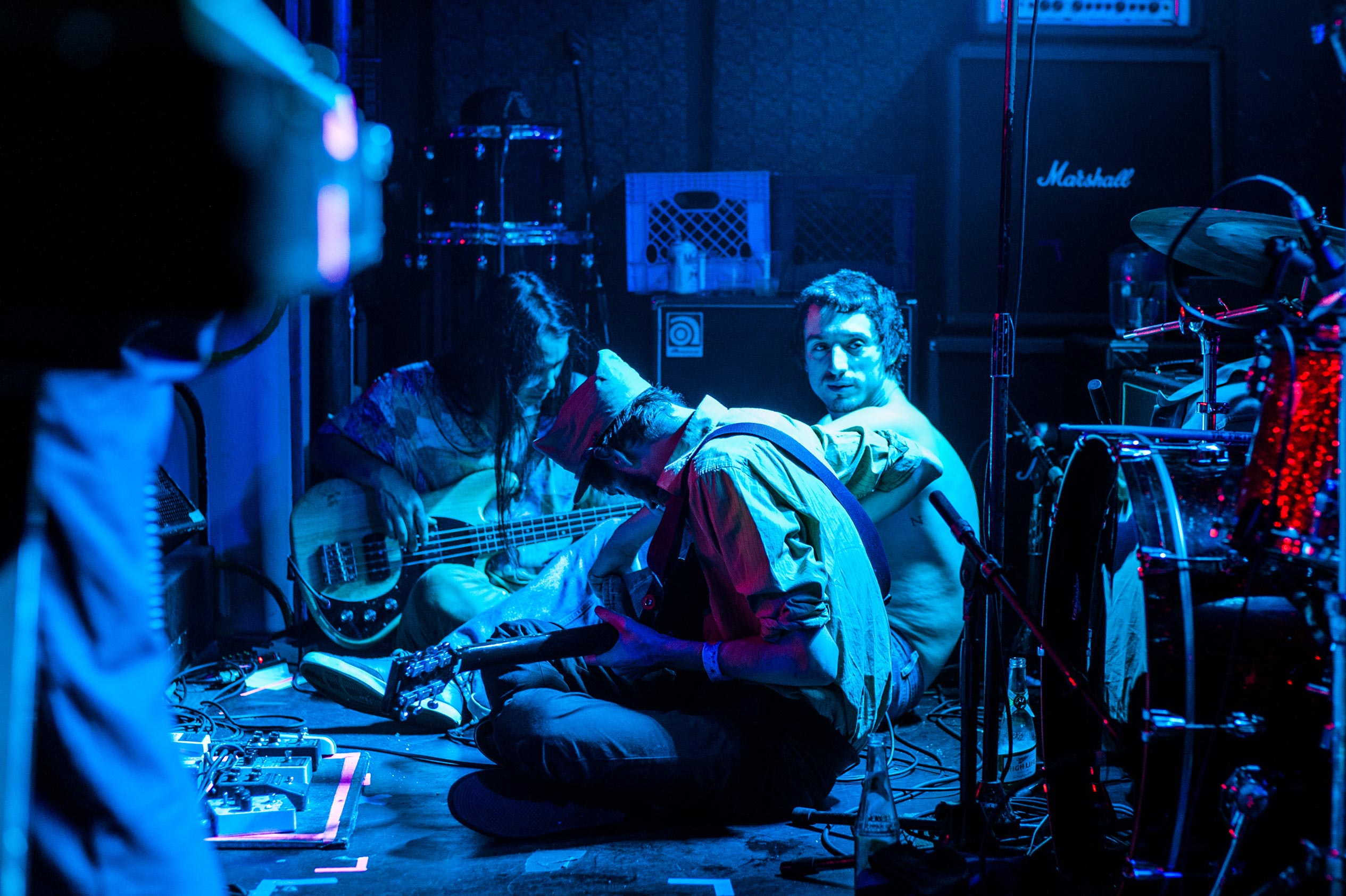 Taishi, Adam and Lias rest during a slow part of a song at Baby’s All Right.

Something that stuck with me was hearing that Lois has been able to stand up from her wheel chair and walk into their house after concerts because “the music moves her”.

The next day, she’d return to normal. 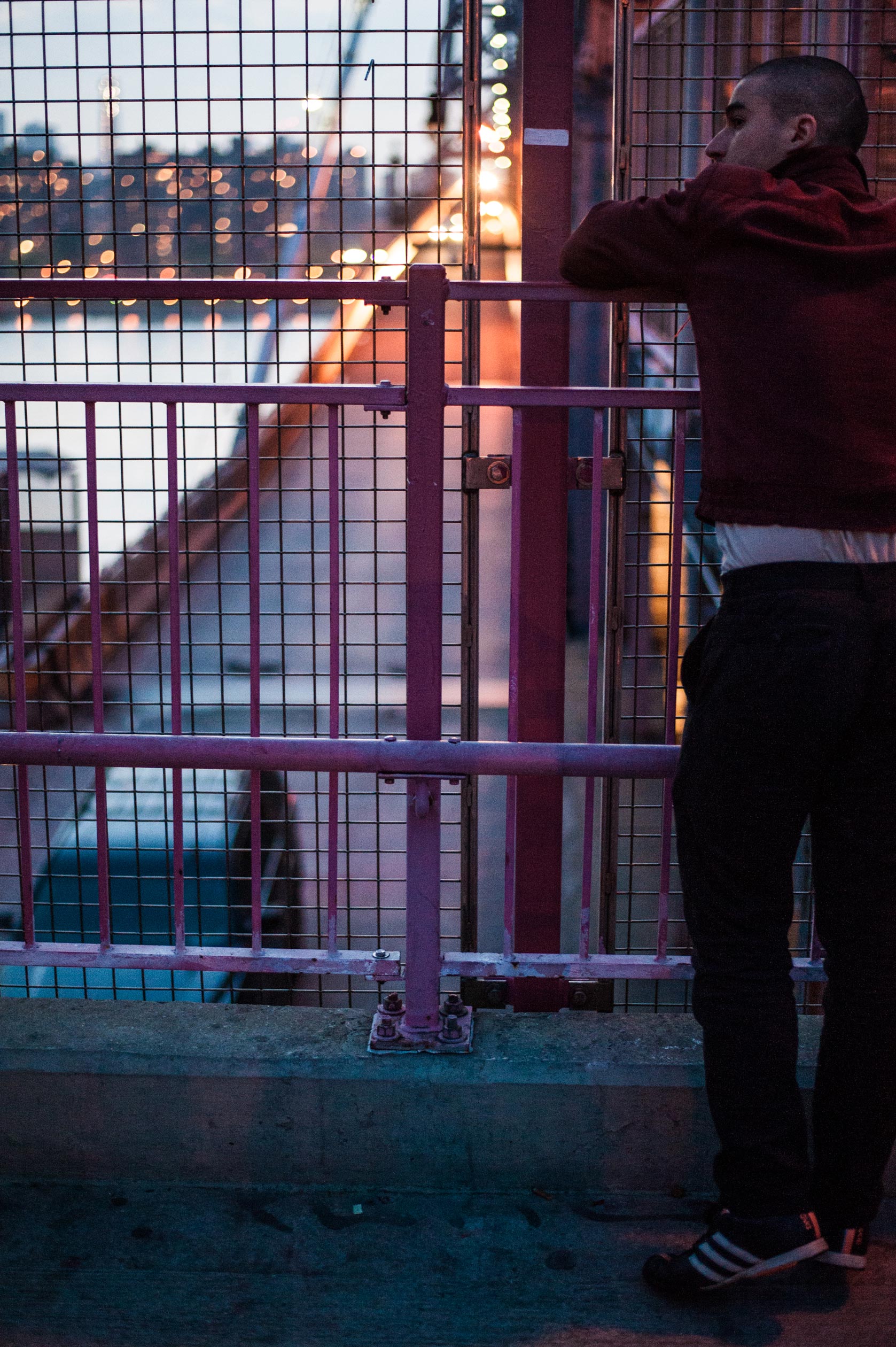 Nathan leans against the Williamsburg Bridge during an interview with Rolling Stone.

At the last show in Manhattan, I was hanging out backstage shooting the chaos of the packed greenroom.

Jo (the publicist) had called Lias to tell him that someone wanted to meet him. 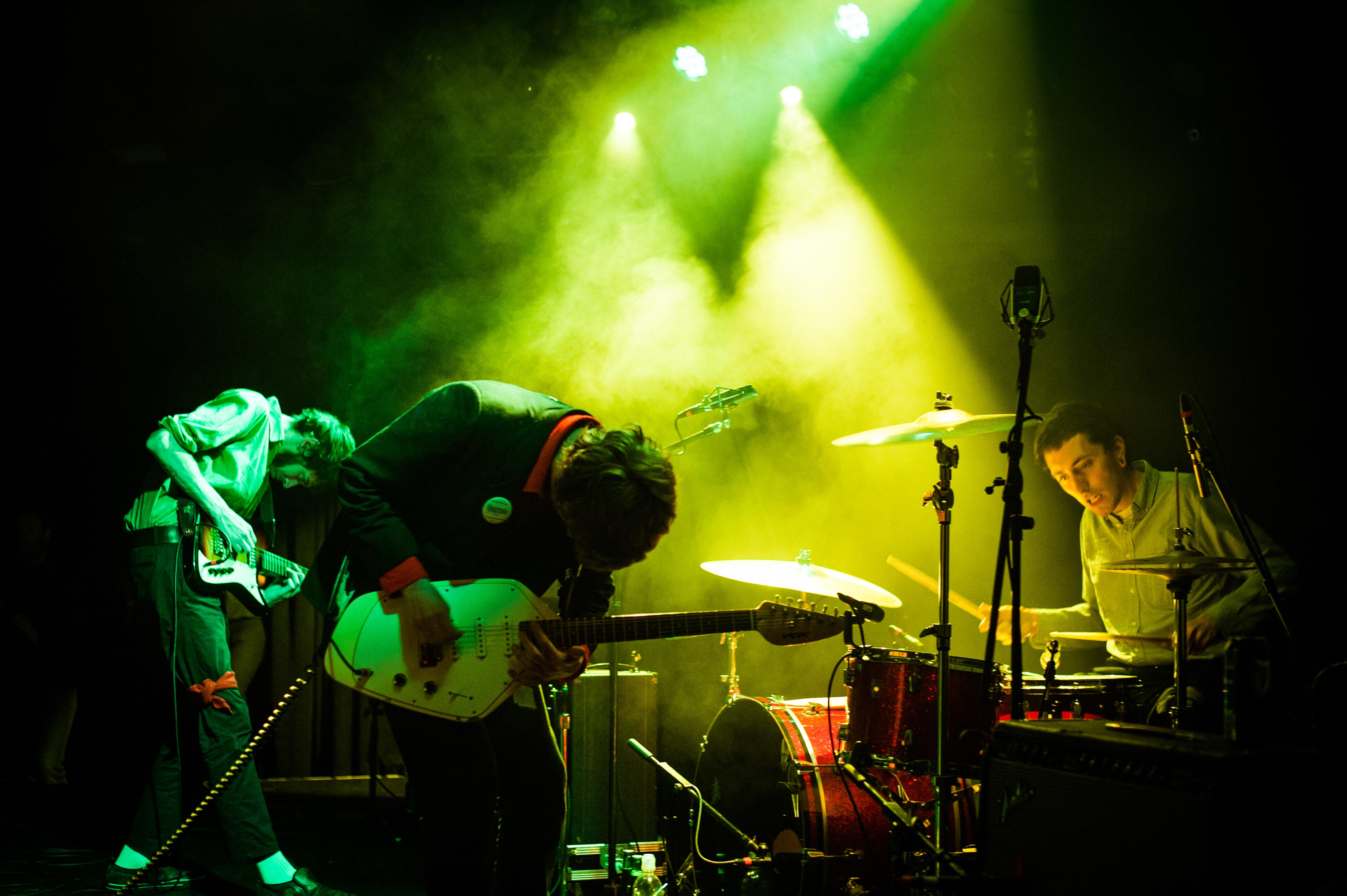 Apparently Gaga is a huge fan of the band and enjoyed the performance.

I recognised her face but I didn’t know her name, to be honest. A friend filled me in and I started shooting instinctively. 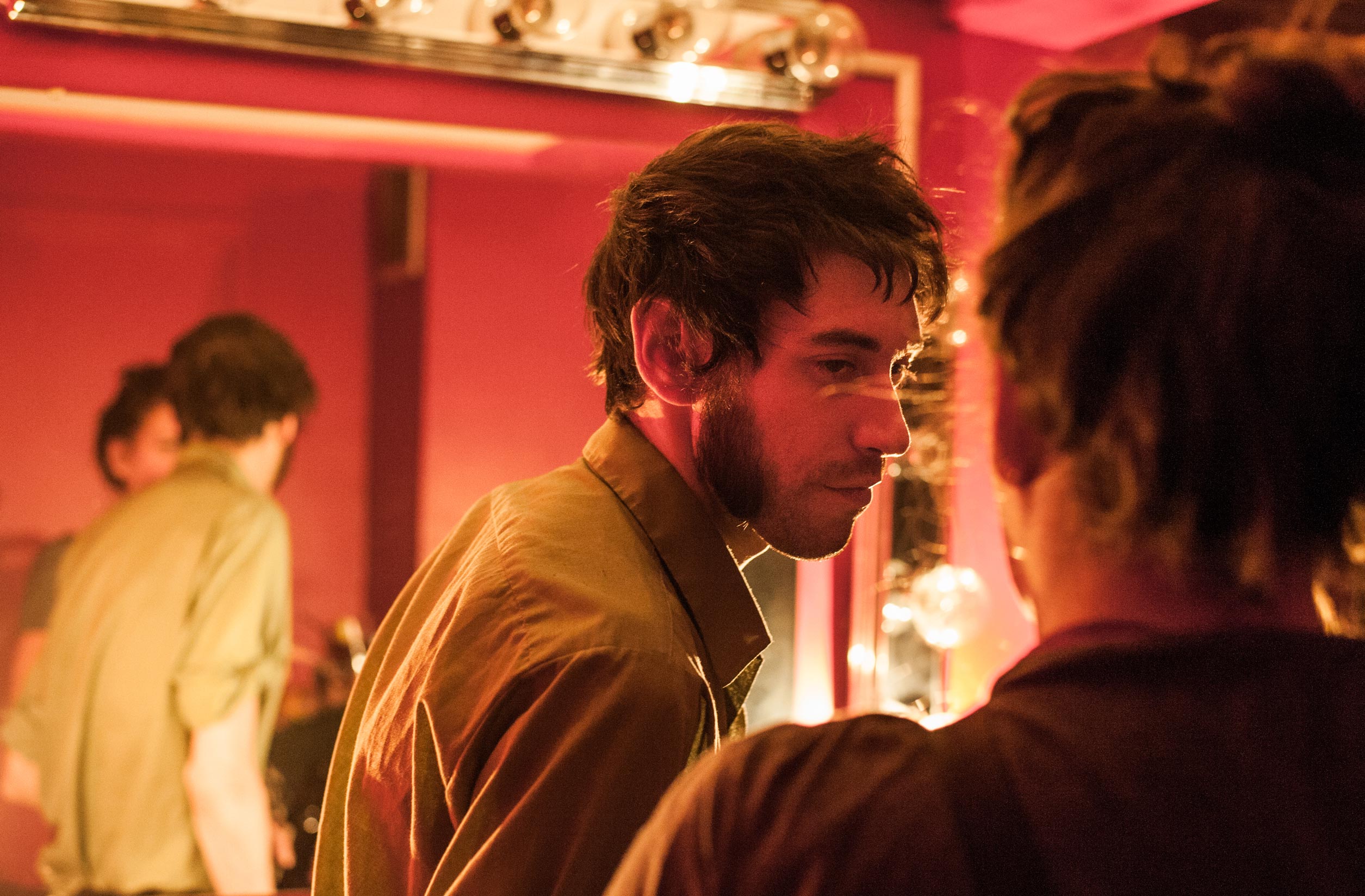 I could feel her presence the moment she walked in.

She had a swagger that seemed to control the entire room without her even talking. 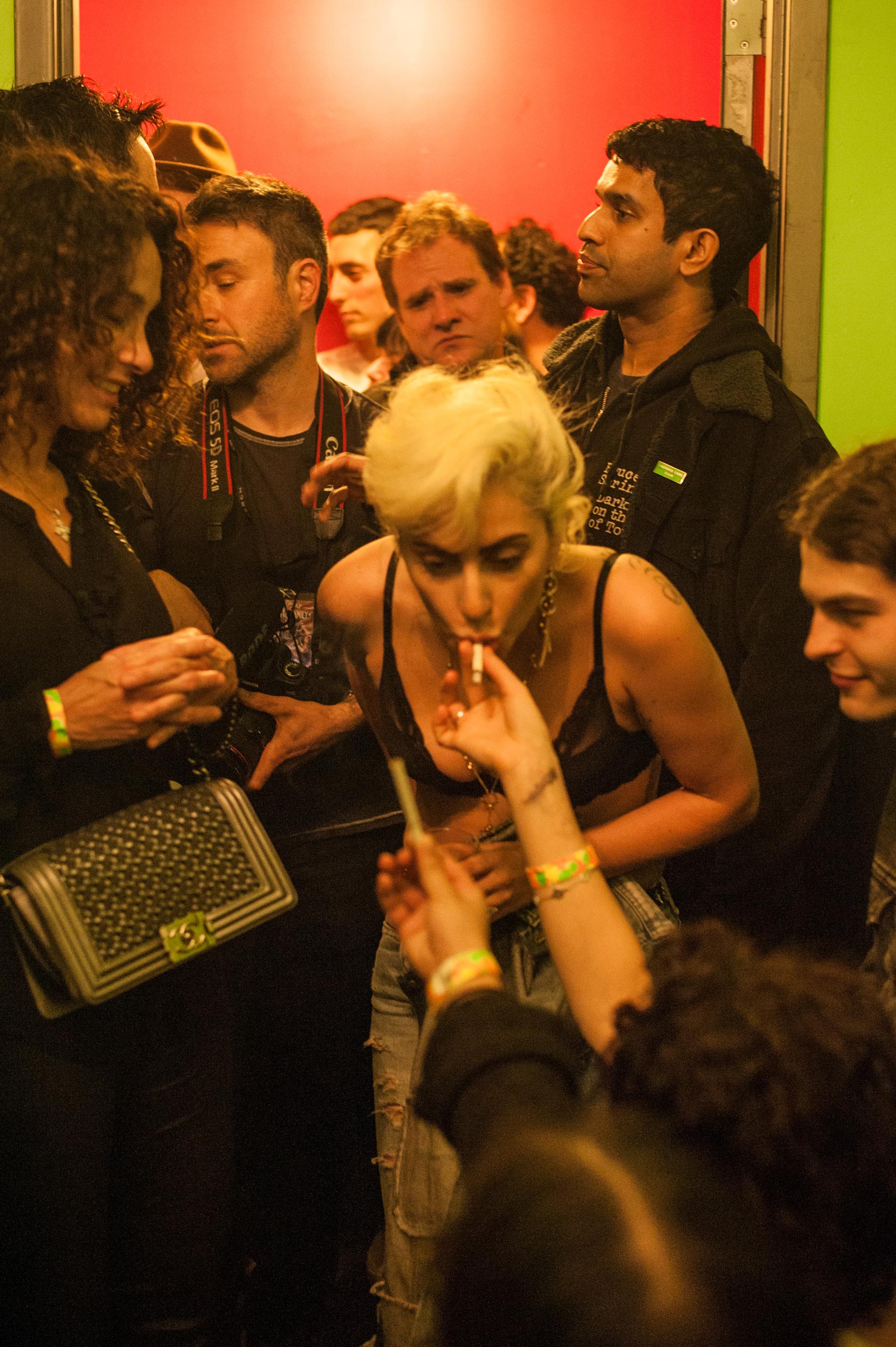 Some asshole came in and pointed a lens three inches from her face and shot off a bright flash.

Gaga wasn’t having it and swatted the camera out of her space. I knew my limits and tried to be discreet about it. 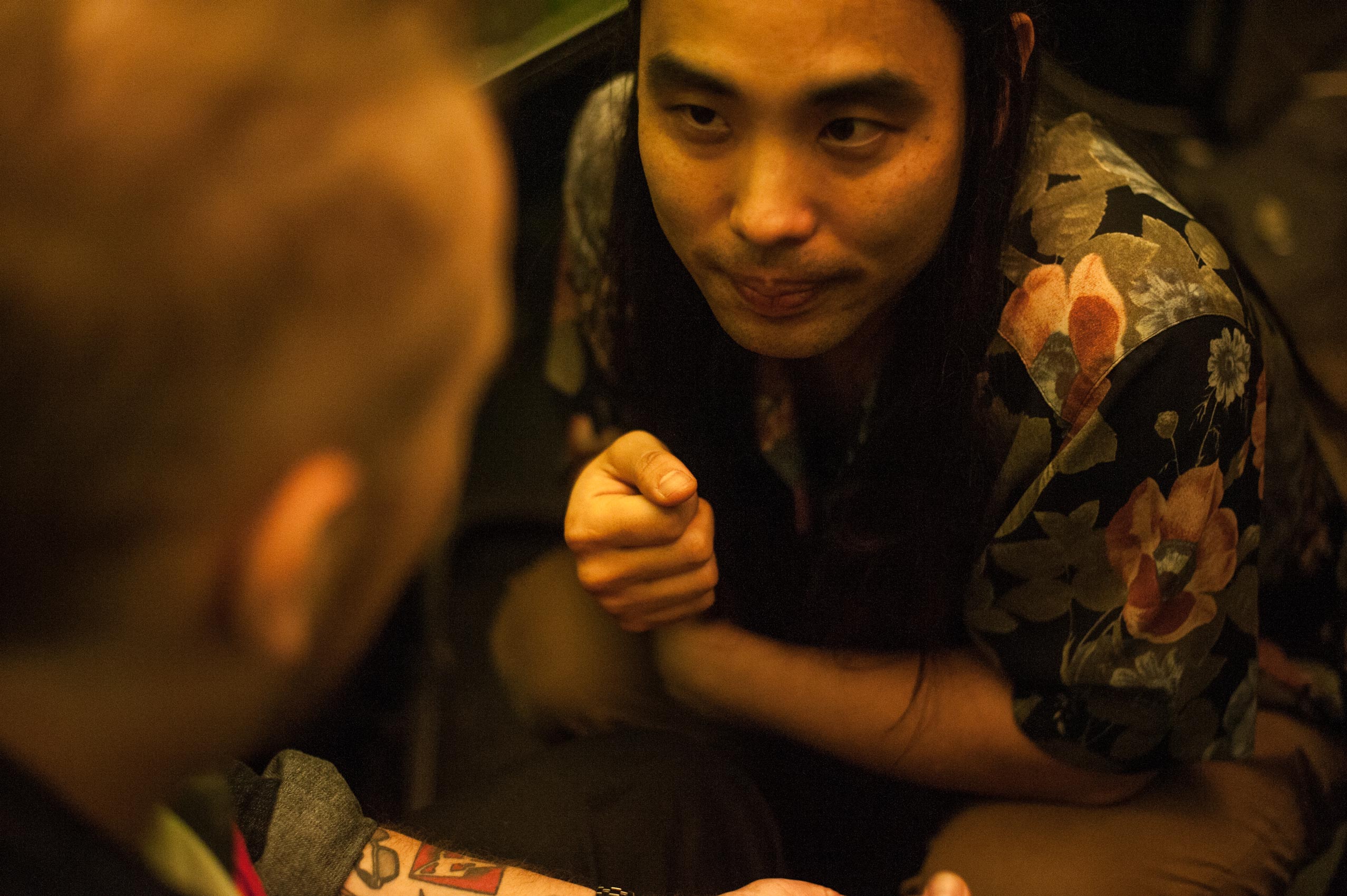 After the show, I heard that the band had gone back to Sean Lennon’s apartment to party.

This was my last chance to hang out with them before I left and I would regret it forever if I didn’t at least try to go, even if I couldn’t take pictures. 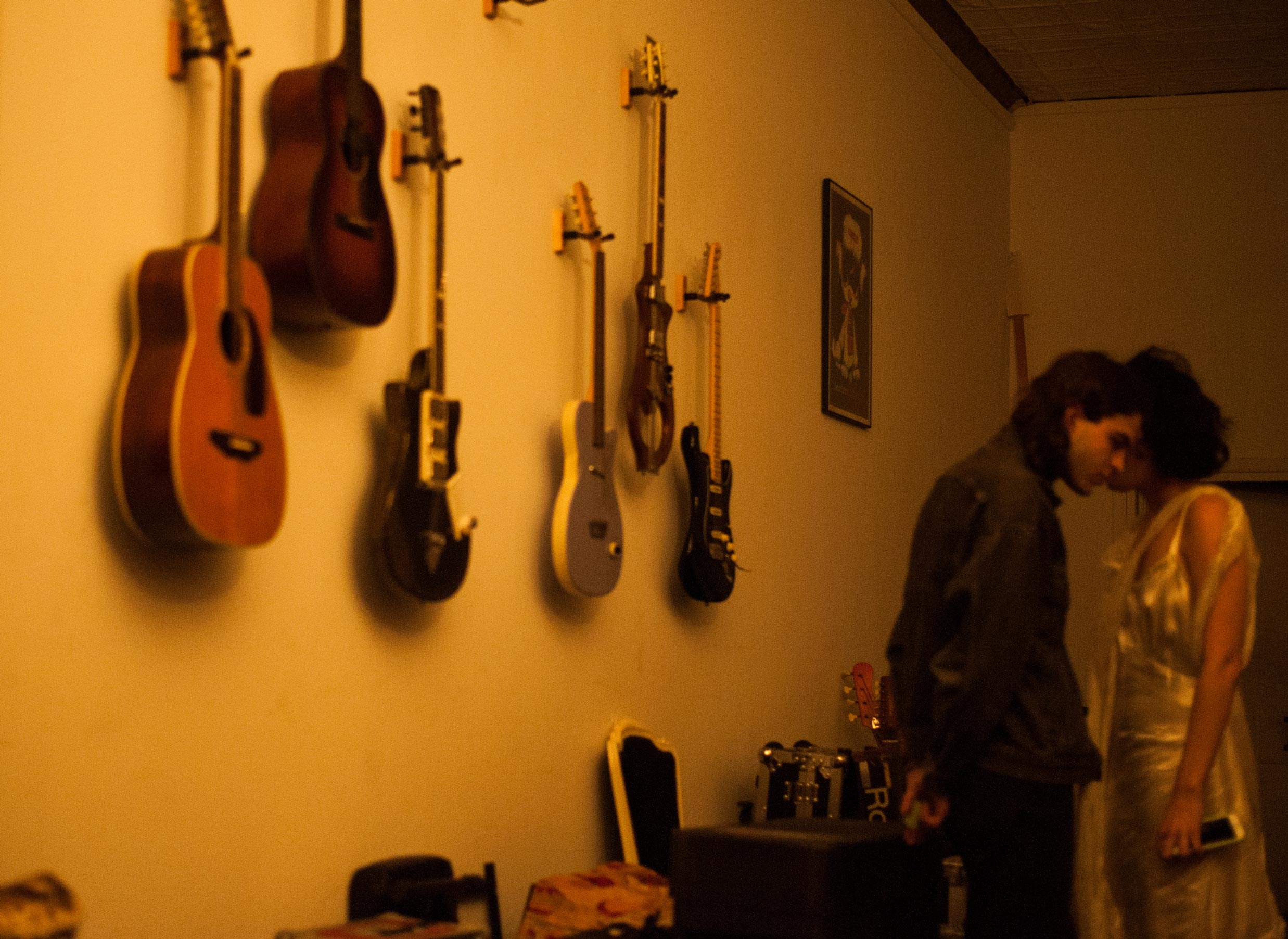 Pete gave me the address and, as soon as I got there, the sound of music led me to a back room.

I opened the door and there was Taishi and Lias of Fat White Family with Sean Lennon and Lady Gaga all having a jam session together.

This was one of those ‘What the fuck?’ moments – I just had to sit and listen. 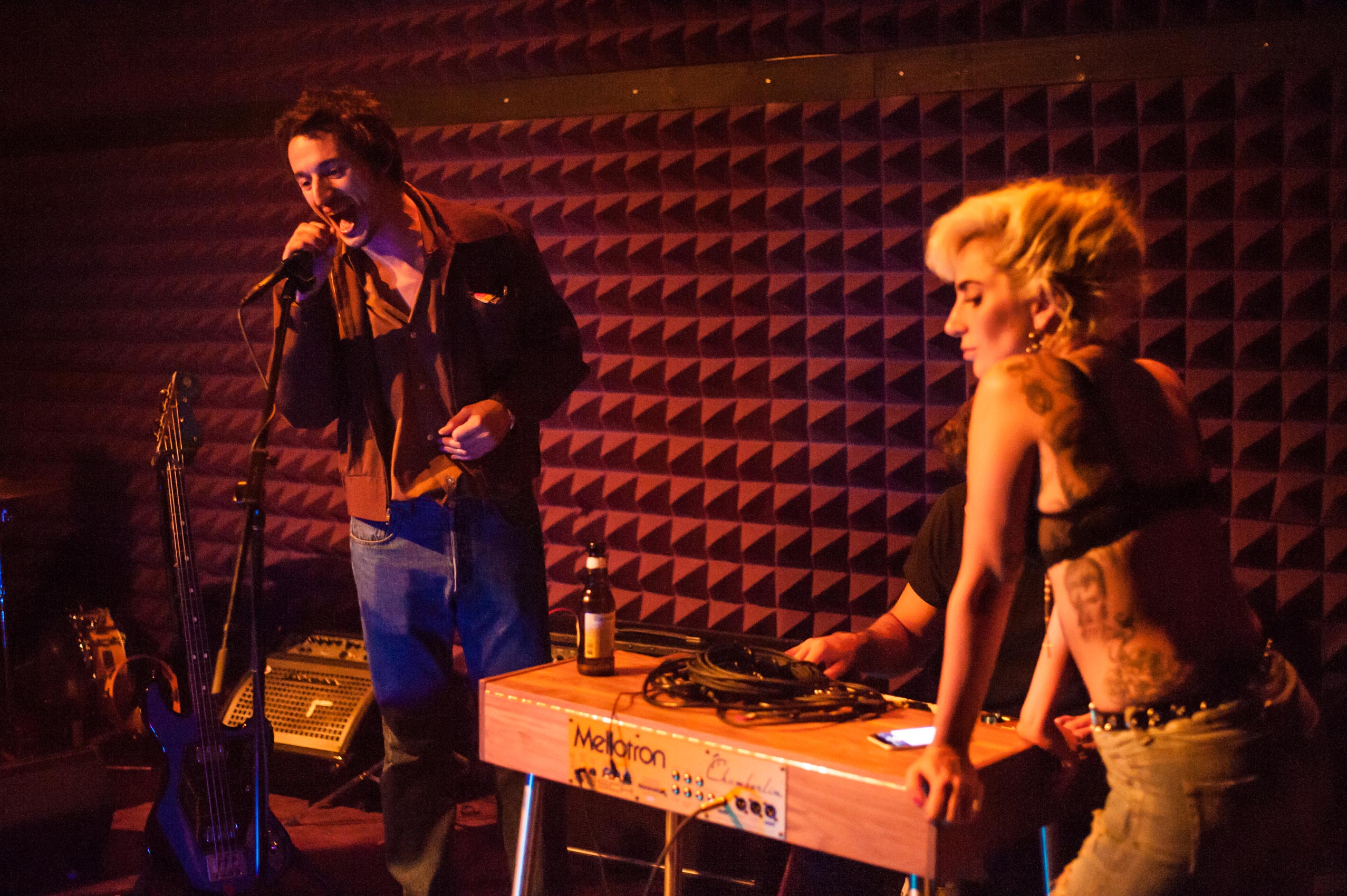 My New York friends Kevin and Vaughn had come with me and they hopped on drums and keyboard. I photographed from the same spot for about five minutes – I didn’t want to throw off the vibe and I didn’t want to push it.

Once it all came to an end, I felt sleep deprived and deathly hungover. But I’d also successfully stepped out of my comfort zone and seized an opportunity with this trip. 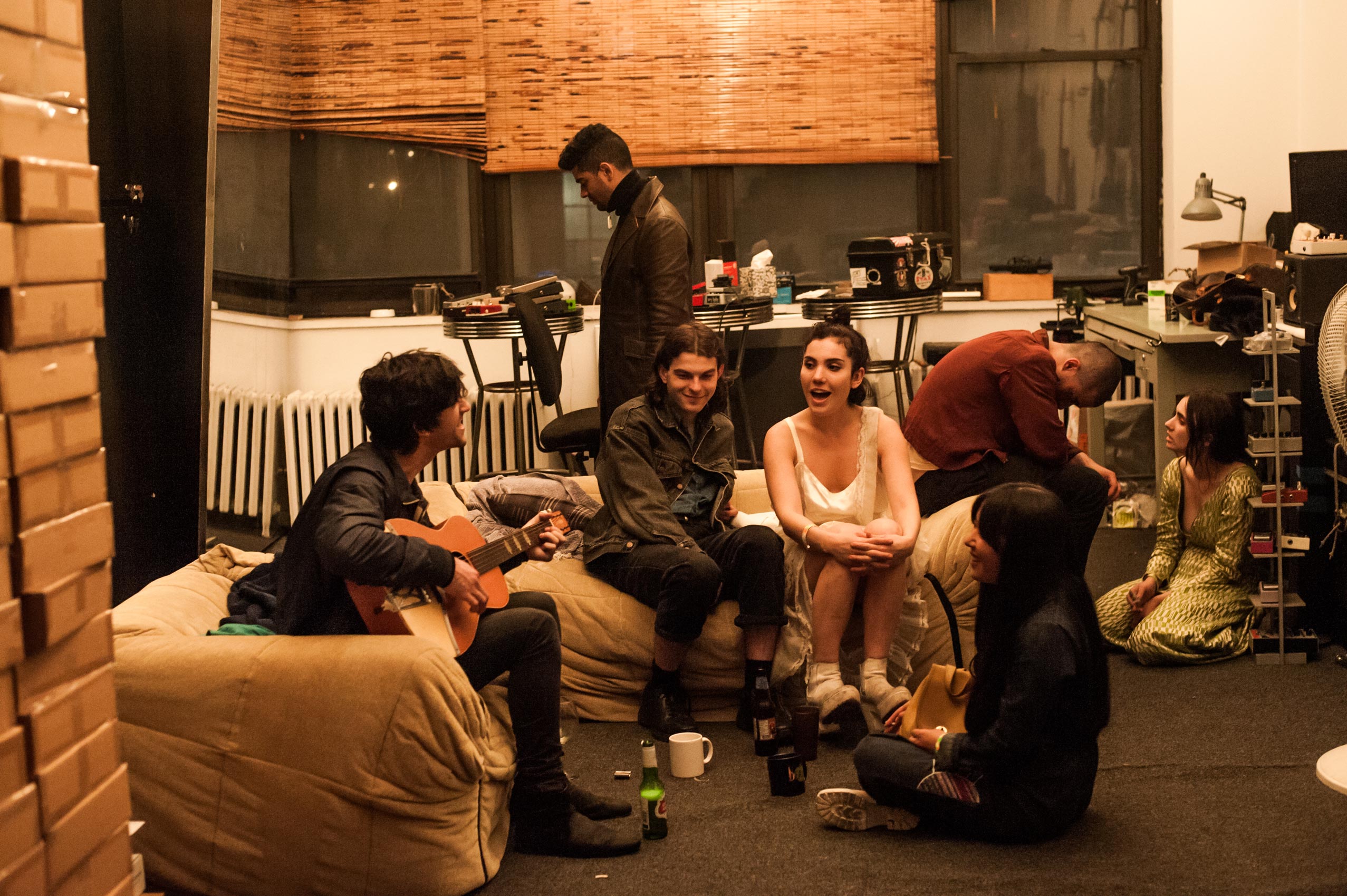 Photography has given me access to people and places I never would have imagined and I’m grateful for that.

I’m also grateful for the Fat White Family for giving me the opportunity to photograph them on a personal level and for such an incredible experience. 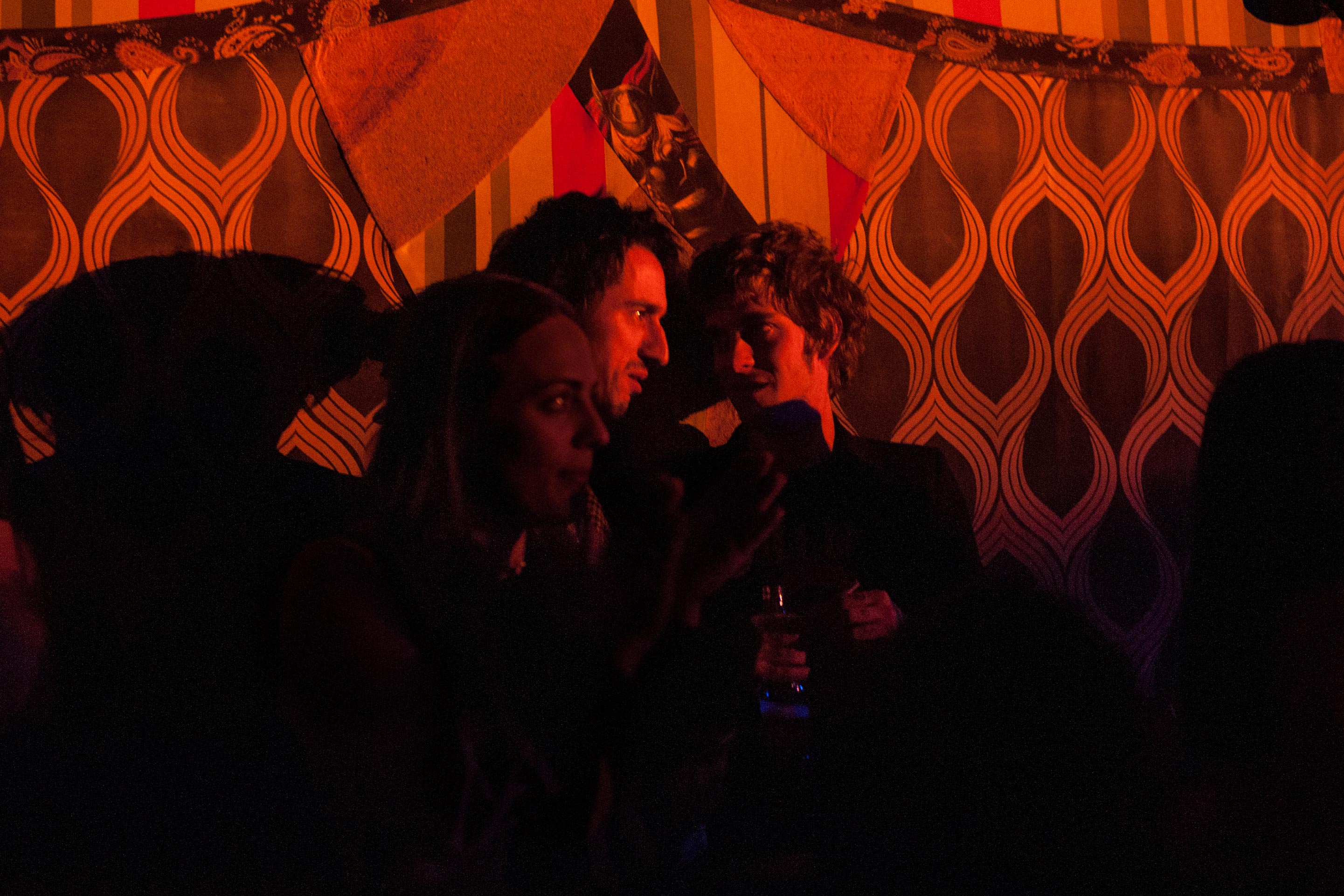 This was my first time shooting a band other than my own, so I don’t have a ton of experience.

But if I had any advice to give, it would be to network as much as you can. Send out emails to the bands you want to shoot on the road or backstage at their concerts. 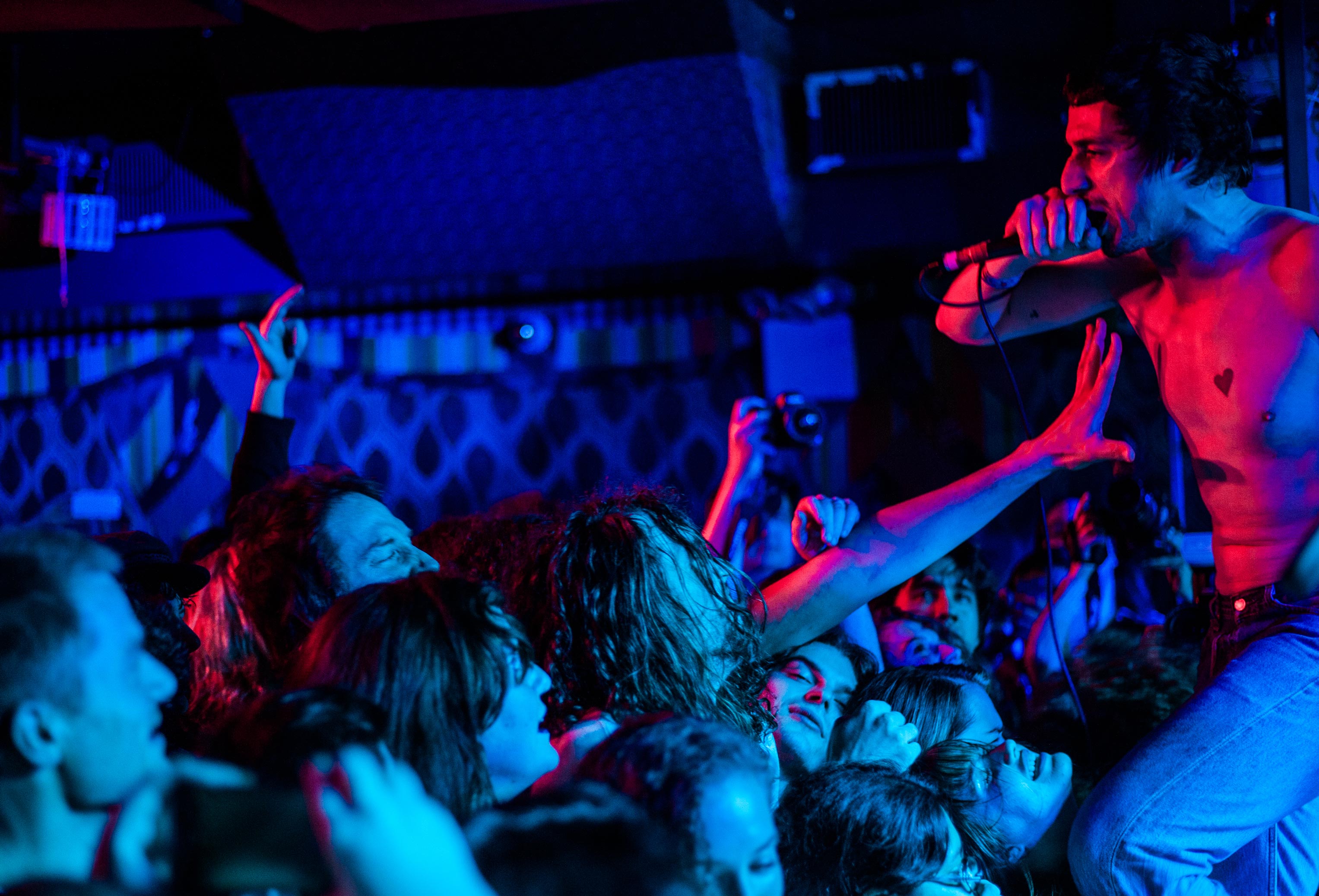 Include a portfolio of your work and just be honest about what it is you want to do. Develop your style and own it.

Don’t be discouraged if you don’t get a response or get rejected. It happens all the time. And do it because you love it and need it and are hungry for the story. Not for the money. There’s not a whole lot of money there anyway. 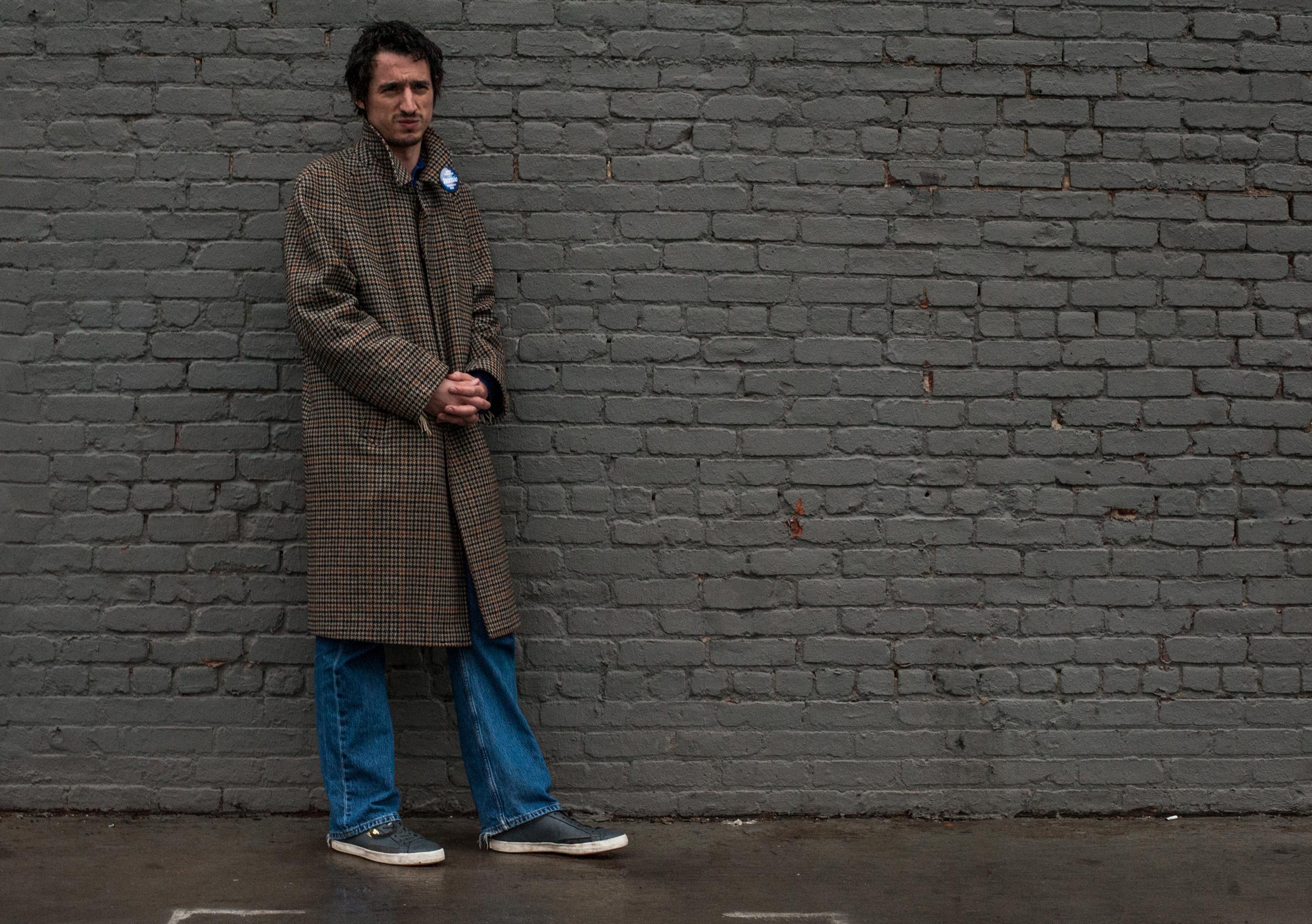 Linkedin
RELATED ARTICLES
OTHER ARTICLES
After building his reputation covering the US civil rights movement in the 1960s, the photographer went on to produce some of the most enduring images of the past century.
A new law change is enabling Britain’s donor-conceived children to know the truth about their origins – but campaigners say the fertility industry must do more to protect people.
From snake handlers to mardi-gras revellers, Tom “TBow” Bowden’s photos provide a snapshot of the wonderful and weird people who make up America.
The pro skateboarder withdrew from the 2020 Olympic Games so he could come out as trans. Now, he’s hoping to encourage others to live as their authentic selves – within the sport and beyond.
The first-generation graffiti artist reflects on the tagging’s emergence as an art form and the players who pushed the medium forward.
Jeffrey Henson Scales intimate portraits and protest images of the BPP and its leaders offer a rare insight into organisation at a time of societal upheaval.