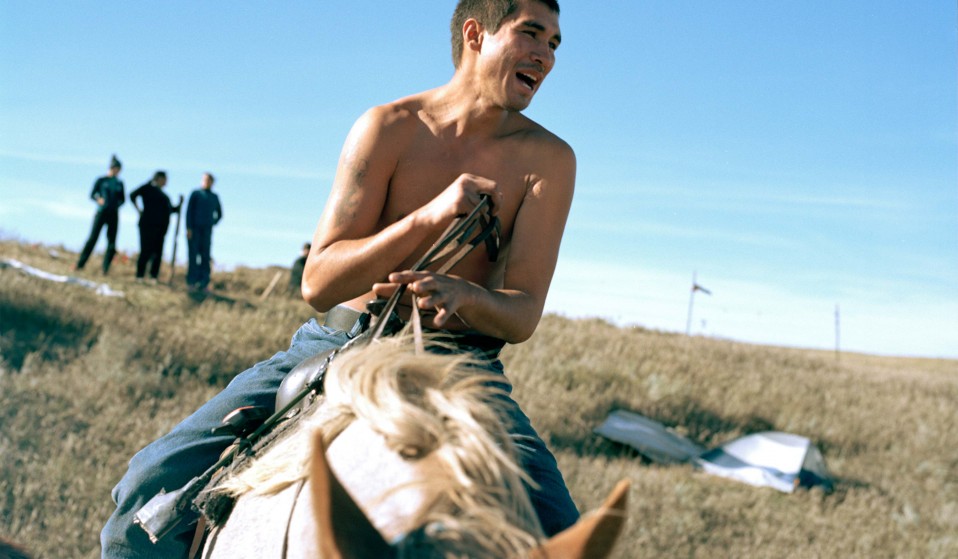 Native Americans have come together in a historic protest against a North Dakota Oil pipeline that threatens sacred tribal lands. These are their faces.

Native American Nations have come together in a historic protest against a North Dakota Oil pipeline that threatens sacred tribal lands. Photographer Mico Toledo went to hear their stories, before news broke that their fight was nearly won.

The history of the relationship between Native Americans and the United States government is a history of broken treaties. Since the first European settlers arrived, natives endured centuries of wars and genocide. They’ve had their lands divided and diminished, they’ve seen their culture and language dwindle, and they’ve seen their quality of life inside reservations plummet to levels equal to those in much poorer and less developed countries.

Treaties began to be signed in the Nineteenth Century to establish federally recognised lands for Native Nations inside the US, usually awarding them lands that the government didn’t want in the first place. Unfortunately, the treaties were quickly dismissed once a valuable resource was found on Native land. First prized animal furs, then gold and most recently, oil.

They call it the Black Snake, a three billion dollar pipeline project called the Dakota Access Pipeline (DAPL) that plans to transport crude oil from North Dakota all the way to Illinois. Work has already begun on a route that crisscrosses four states – threatening sacred Native lands and burial grounds – and crosses the Missouri River twice. A possible oil spill there could seriously threaten the water of the Great Sioux Nation, but could also affect 16 million people in cities downstream who depend on the waters of North America’s longest river. 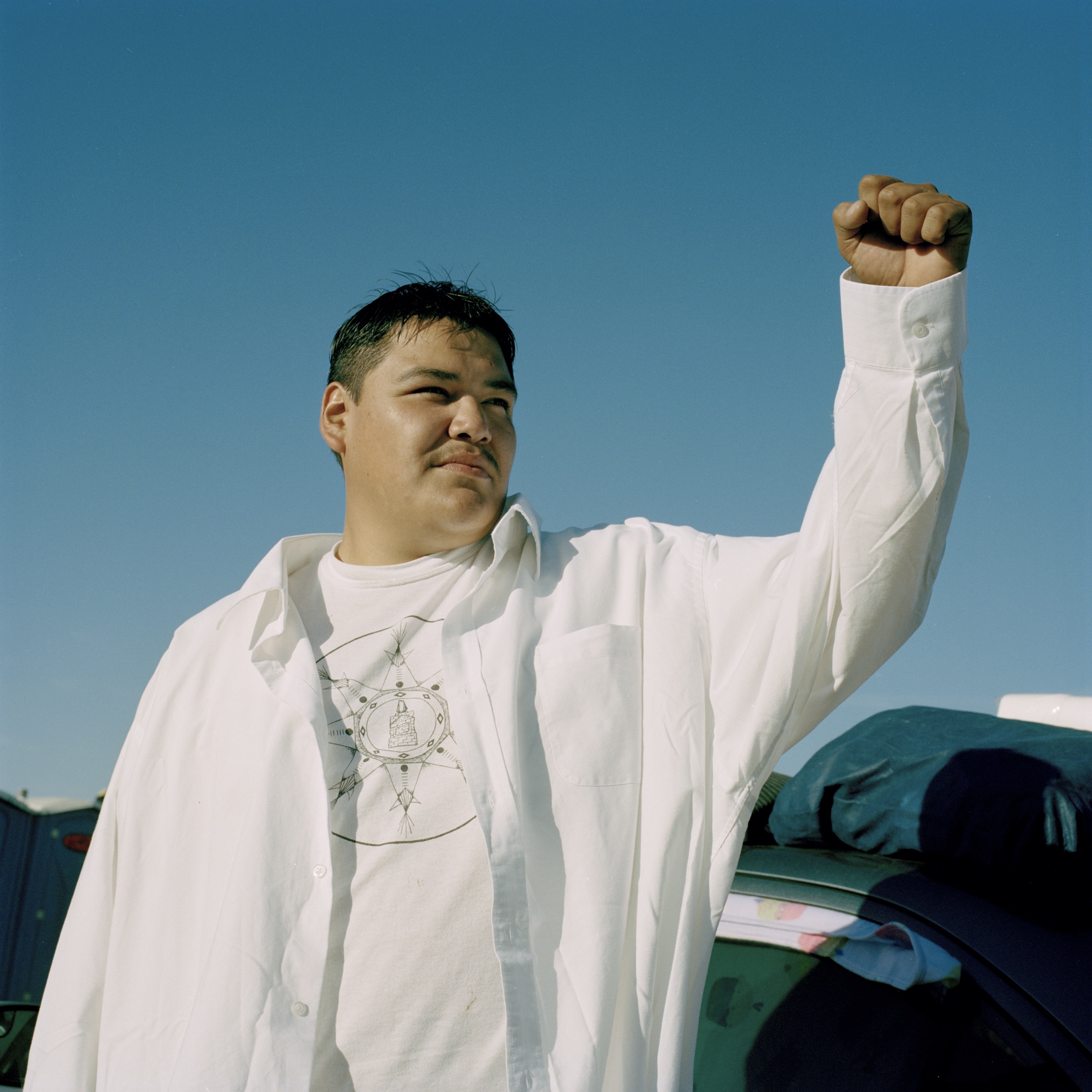 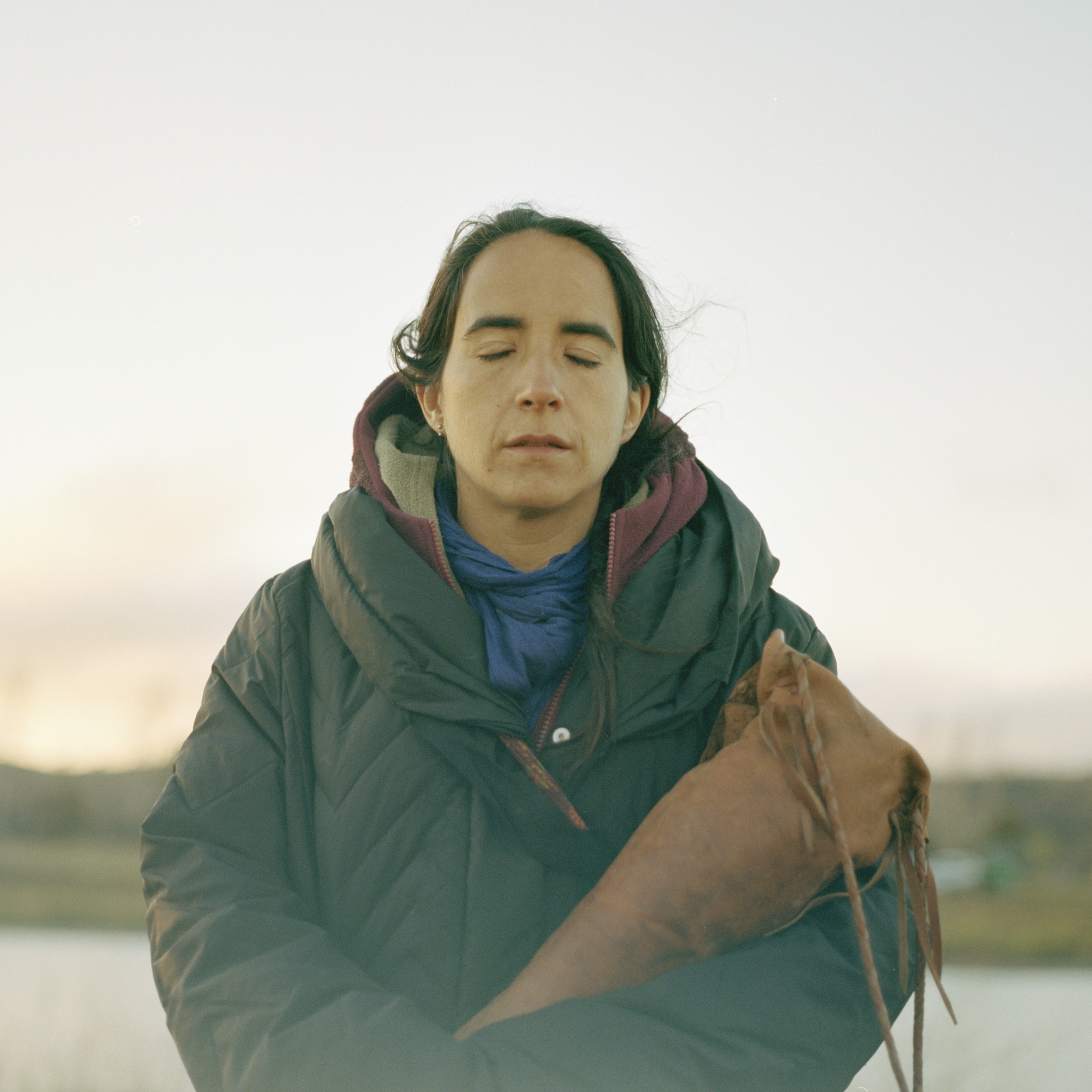 In July this year I read a piece in the Guardian. It talked about an unprecedented two hundred tribal members from several Native American nations who gathered on horseback at Standing Rock Sioux, in North Dakota, to oppose the construction of the pipeline.

Describing themselves as ‘Water Protectors’, these were peaceful people and something in their eyes caught my attention. I saw confidence, I saw hope. In a few months, a couple of hundred tribal members had snowballed into more than two thousand people, tribal members and outsiders, had joined forces to oppose the DAPL. Natives and non-natives from all over the world started fighting for the same cause: Water. Land. Life. 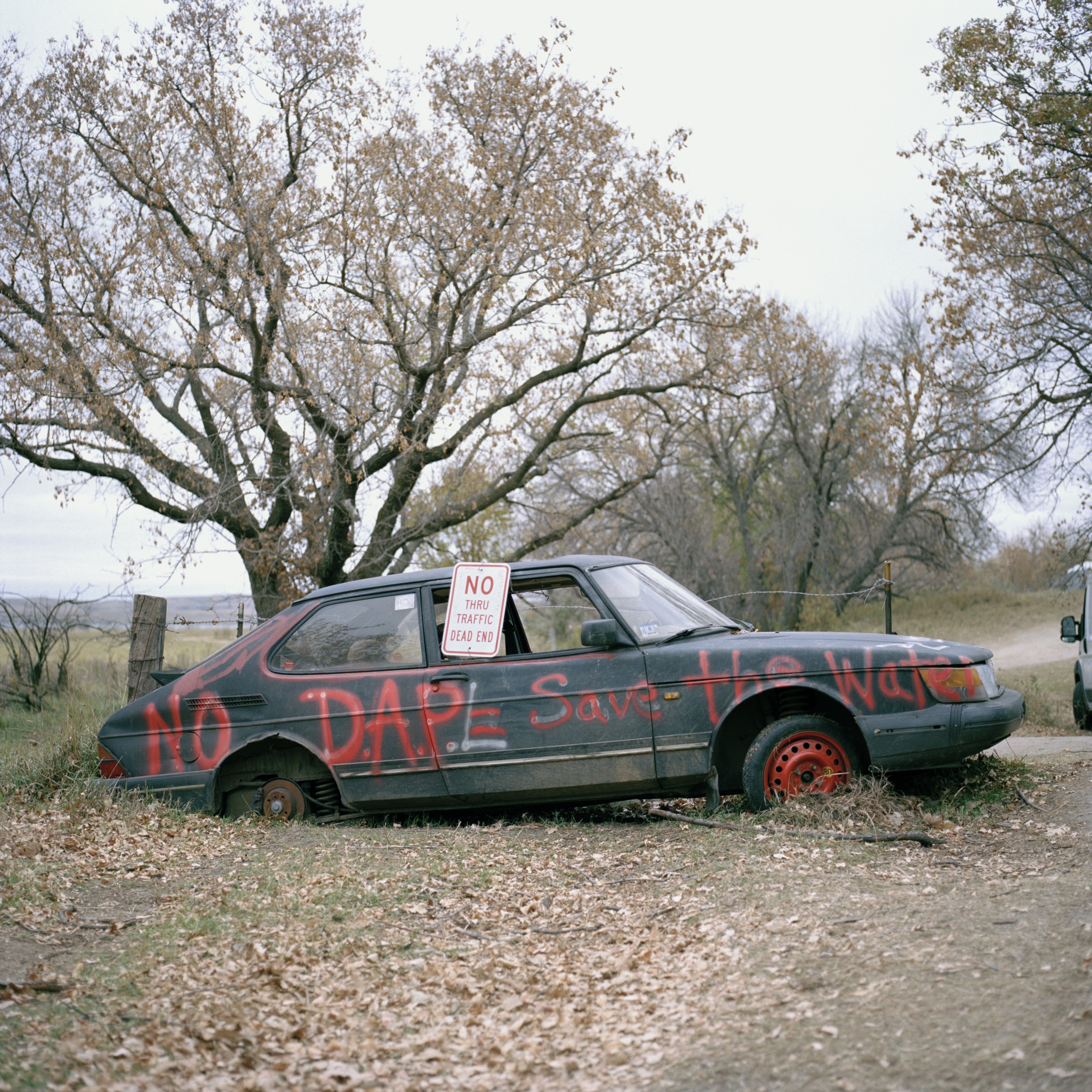 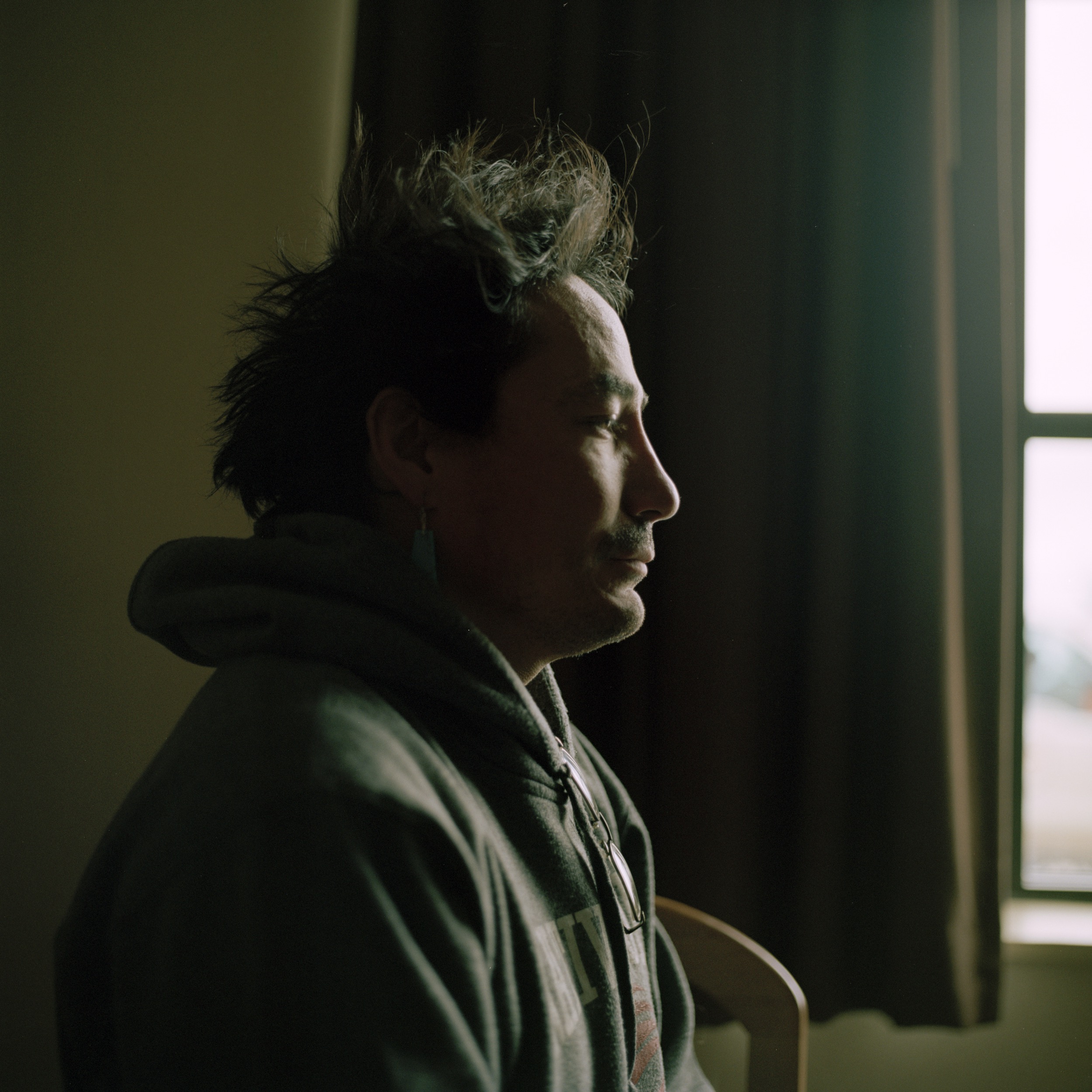 Few media outlets were covering the protest back then, but this single article made a huge impression on me. Right then, I knew I wanted to photograph these modern day warriors. But I am not a journalist and I didn’t want to cover the news, the frontline, the protests. There were already other more capable photographers doing that job.

As a documentary photographer, I was interested in people and their stories. I was concerned with the tribes. I wanted to understand the personal stories behind the news and maybe find an underlying thread connecting all these souls.

What attracted them? Who were they? What made them choose this fight between all others? Why now? Why here? I had so many questions and the only way to answer them was to get the first flight to North Dakota and figure it out for myself. So I did. 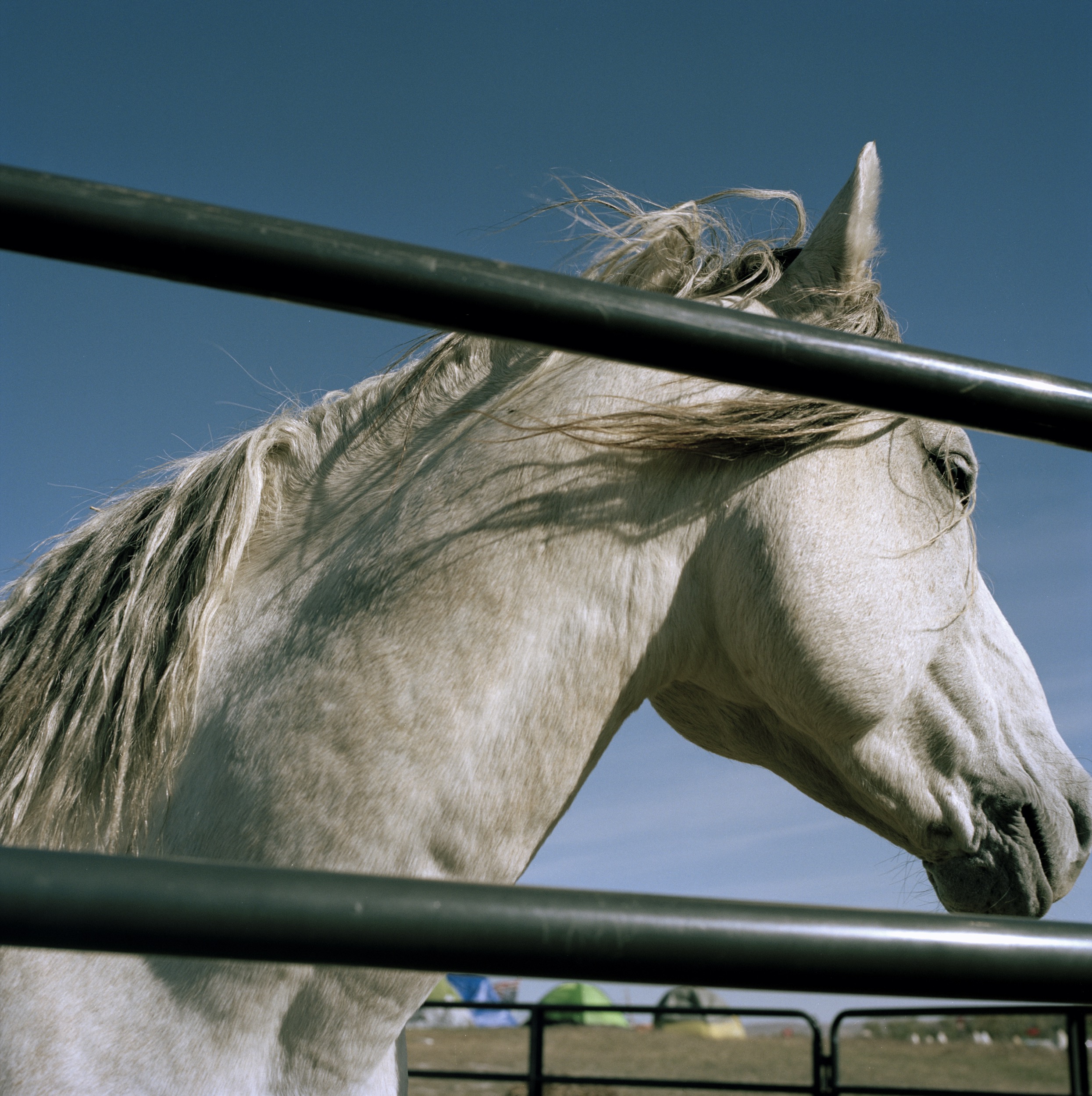 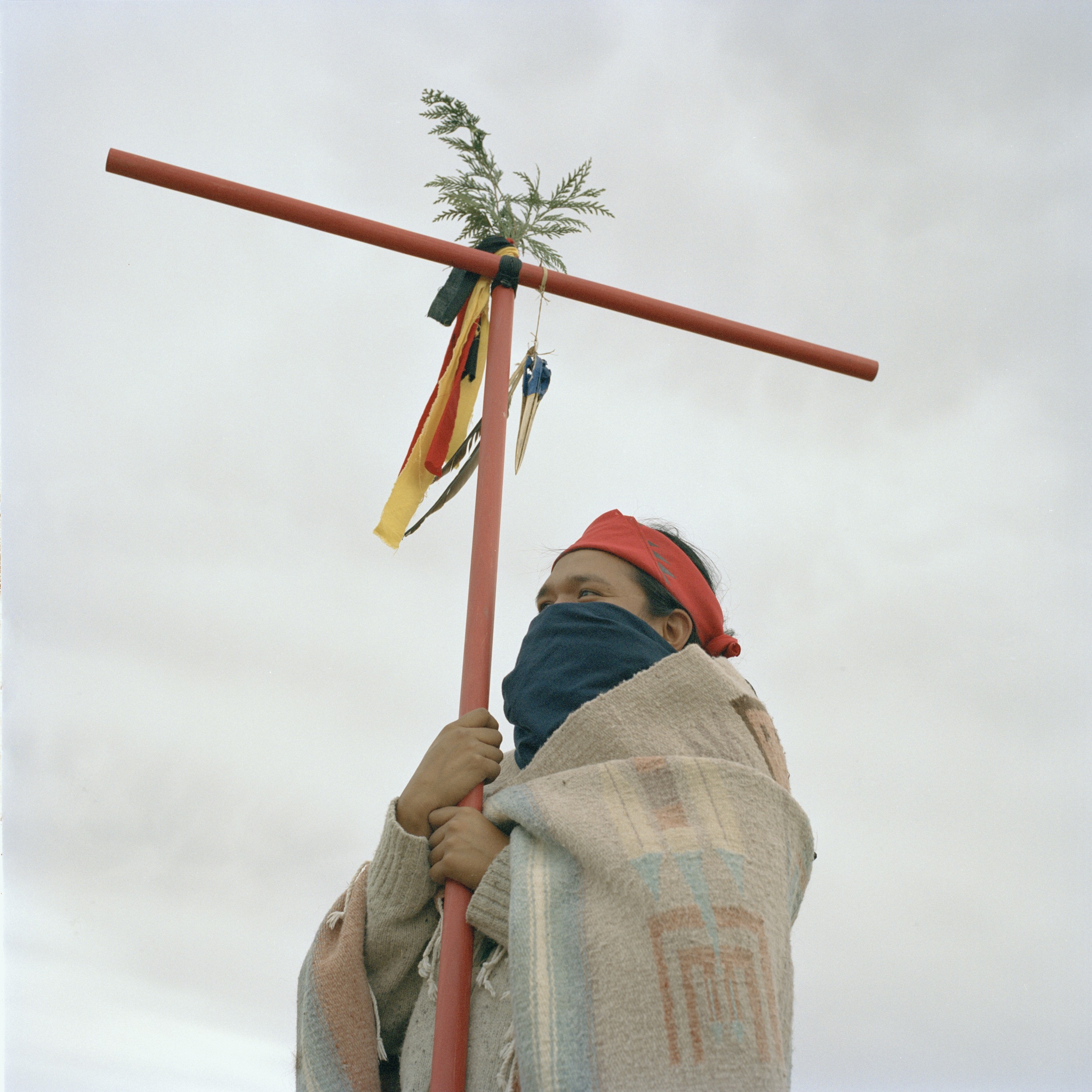 I arrived at Oceti Sakowin, or Seven Council Fires, camp and began wandering about, carrying two medium format cameras and a notebook. I photograph as Jack Kerouac wrote, through shambling. I let my subjects take me to my next subject and I shamble my way every time a new door is opened, stopping for lunch with some of my subjects whenever we’re hungry. I’m in no rush.

I didn’t have an agenda, just a few items on a list of things I thought I should photograph. I walked alone until I found someone or something interesting. I wandered, I chatted, I laughed. Sometimes meaningful encounters lead to great talks but terrible pictures, other times short encounters lead to good shots. Some encounters lasted five minutes, others two hours, or even two days. I think you can see that in some pictures, as some of the people I photograph are very at ease in front of the camera. I like to know that I’m not stealing an image from them. Natives had too much stolen from them already. I am genuinely curious about their ways of life, their hopes, their fights, their dreams. 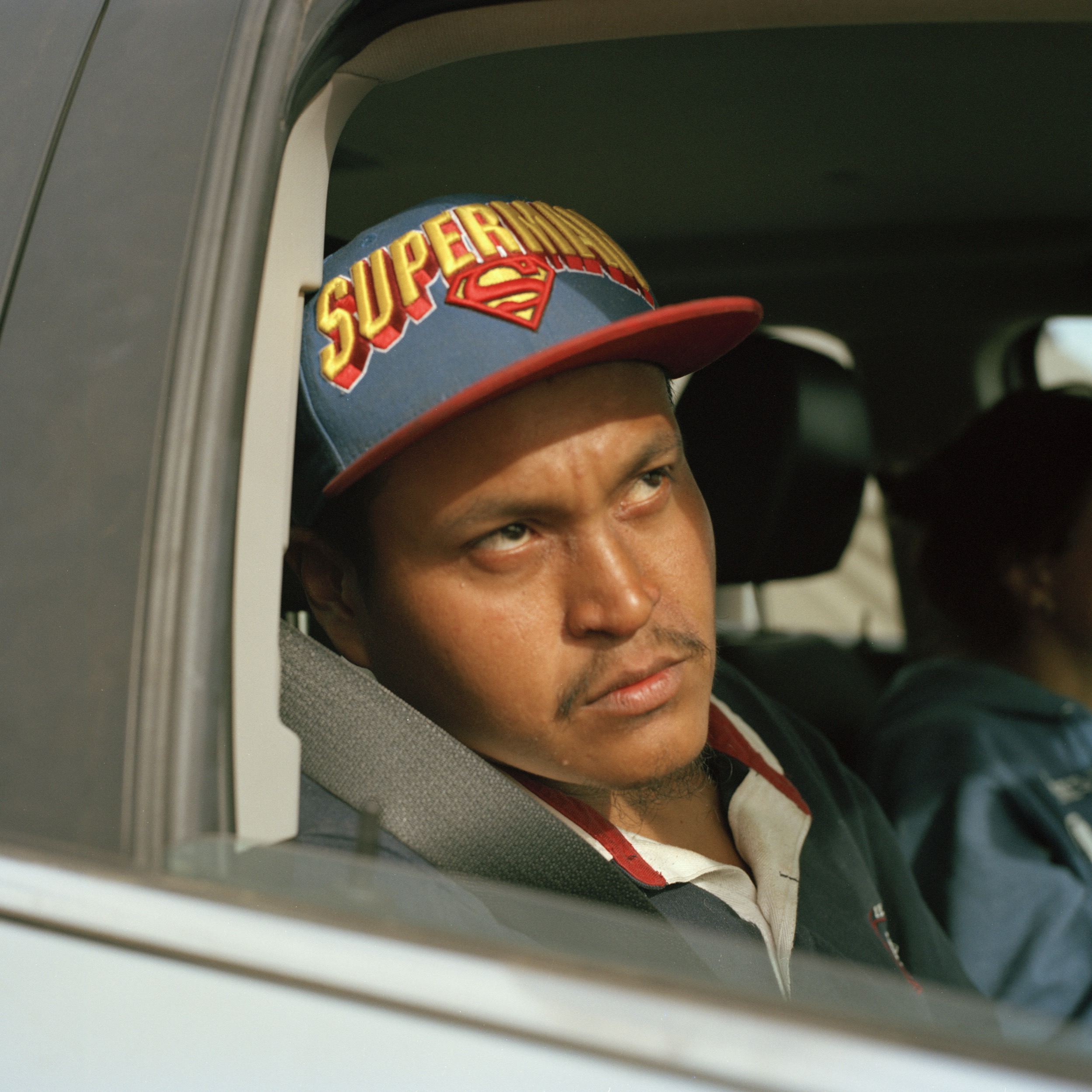 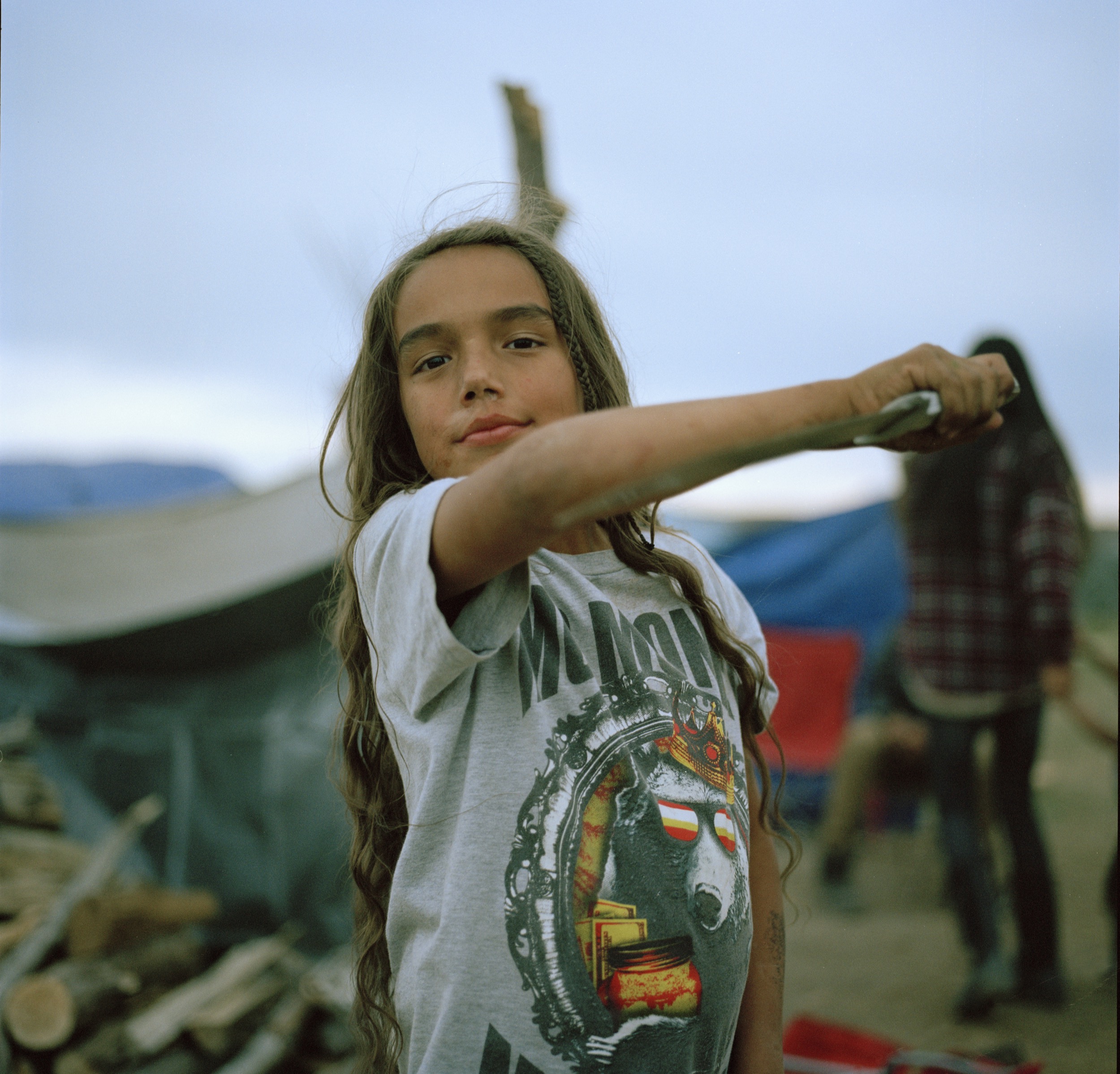 Even though many of the people there are from different tribes, different backgrounds, different nations or even different countries, I think what connects them all is a sense of belonging. I feel that everyone I approached felt a deep sense of purpose in this gathering, in this struggle, in this fight for something as simple as water. They realise their personal investment in, and the deeper implications of, a fight that goes beyond an important natural resource.

No matter which tribe or nation they were coming from, they felt connected at heart. For the first time in centuries, different tribes came together to fight a common fight. When I saw young native people in circles chanting the same chants their fathers sang before them and their grandfathers sang before that, I felt they found themselves as people and realised the beauty and importance of their own culture.

A few days after I left things got hotter. Many protestors were arrested, shot at with rubber bullets and maced. But something gave me hope. News of this injustice was spreading and big media finally started covering a fight that began over nine months ago.

When a golden eagle landed in Rosebud camp just last week and hung out with protestors for an hour, I took that as a sign. A few days later a stampede of wild buffalos stormed through the field next to a big standoff with the police. These events made me realise that nature is on their side. 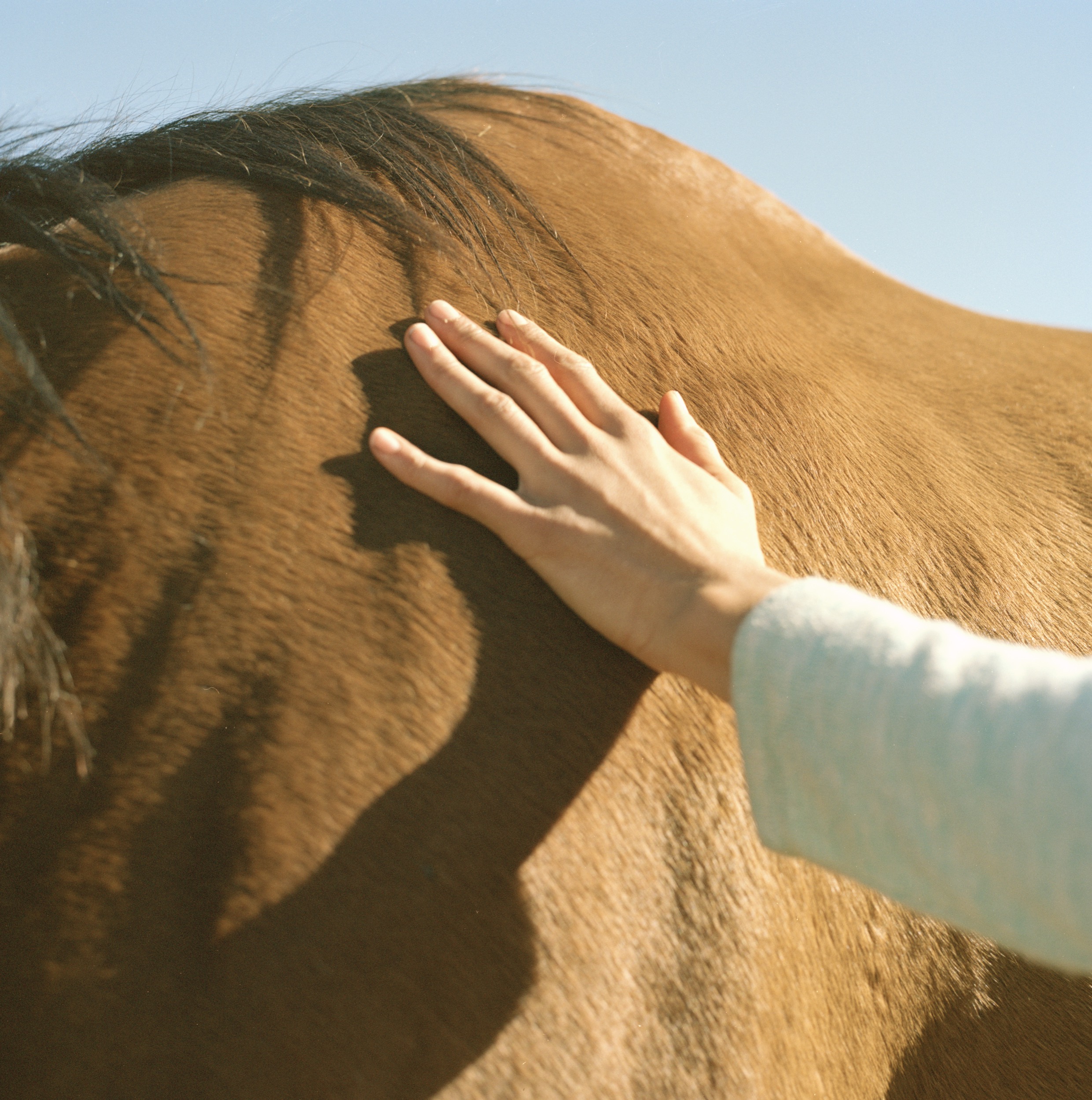 I finally understood they fight for water because they still feel a connection with the animals and nature in a way that we completely lost in the developed world. The police, the military, the state and the business interests behind the DAPL don’t comprehend that connection or the value of water and its life-giving properties. Their narrow view of the world is only concerned with growth, money and oil. All in the name of so-called “progress” – but it’s my gut instinct that greed is the real motivating factor.

My project is far from over. I will come back next year, but I know things will be different. Maybe the pipeline goes forward, maybe it will be finally halted. Whatever happens, events here have made a profound impact on all those involved. I hope the connection and unprecedented coming together I’ve seen is never lost, even if the water protectors don’t manage to stop the DAPL.

Whatever the outcome, I hope the months of resistance we’ve seen here create a ripple effect and set a precedent to anyone fighting against big oil corporations, showing people that they have a chance if they stand together. News has broken that a key permit will be denied to the drillers, it’s looking like this fight might well be won.

Check out more of Mico Toledo’s work on Instagram.

Linkedin
RELATED ARTICLES
OTHER ARTICLES
50 years since its inception, and the campaign calling for recognition that capitalism depends on domestic labour is as pertinent as ever.
In the latest instalment of Photographers in Conversation, the chronicler of raves, protests and beyond explains why he’s drawn to such specifically visceral environments.
Photographer Matthew Brookes recalls following a group of young people in Venice Beach living in search of the perfect wave.
A new edition of a seminal book brings together iconic images of the band onstage in their full glory and backstage in moments of unguarded camaraderie.
On the fifth anniversary of the tower fire, around 18,000 joined the walk to remember the 72 dead and to demand justice.
In her new book, the author explores the country’s housing crisis in human terms and calls for radical action to address a broken system.