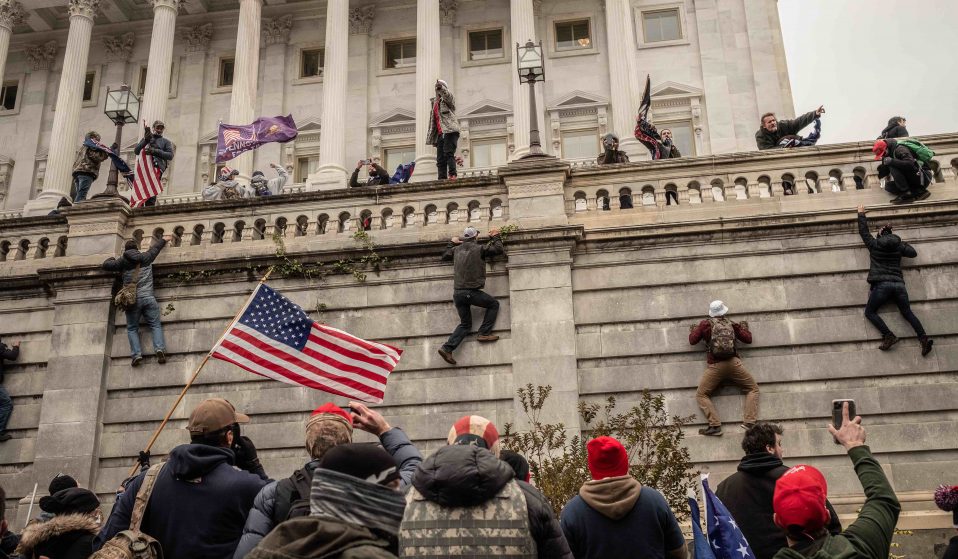 Wil Sands was shot in the eye at a BLM protest last year. He was at the Capitol to cover last week’s riot too – where police response was radically different.

Photographer Wil Sands was shot in the eye covering Black Lives Matter protests last year. He was at the Capitol to cover last week’s riot too – where the threat of violence from rioters was urgent and real, yet police reaction was radically and exasperatingly different.

On 30 May, 2020, I was in DC to document a Black Lives Matter protest. George Floyd died on 25 May, so there’d already been a few days of pretty major protest in Minneapolis, and there was a sense that this was definitely growing nationally.

When I arrived, the event itself wasn’t huge. Generally speaking, it was pretty tranquil: there was yelling at the police, there were some pushing matches along the cordon, but I’ve been to things that were far crazier. I didn’t have an assignment at the time, so the idea was to get some background, start shooting and then sort of figure out where that would eventually lead me. I got there about 9pm, shot the police cordon, shot some people protesting, did a couple of interviews, and walked around the block.

Things were calming down, so I was planning to leave. By that point, the police had started to disperse units out; they were trying to contain the dissipation of the protest. But the mass of people had largely disappeared. The night was ending. I stood behind a lamp post, just to have minimal cover, and I was looking at my phone to try and figure out where I was parked. Then I heard the shot. I turned my head, and immediately upon doing that, I watched a tear gas canister hit me directly on my right brow, and across the bottom of my orbit.

I fell to the ground and immediately knew that it had hit my eye. I couldn’t see out of my right eye and I had a pretty big cut on the inside of the top of my eyelid, so it started bleeding heavily. I’d been covering protests in Chile a few months prior, but also having just spent years around these weapons, I knew almost instantaneously this was a serious injury. I grabbed the first person next to me and said to her, ‘Can you see the eyeball? Is the eyeball still in there?’

The end diagnosis was a partially torn retina, some severe damage to the cornea, some haemorrhaging in the back of the eye, and then a pretty severe laceration in the top. They did surgery the next day, reattached my retina, cleaned up all the internal parts of the eye that were damaged, and then put in what’s called scleral buckle, which is essentially a rubber band that goes around the eye and squeezes down and tries to hold the retina in place. Long story short, I’ve lost about 75 per cent of the vision.

The injured eye was my shooting eye, so I have had to adapt as a photographer. But I was able to begin doing that almost immediately after the surgery. In those moments, I was thinking how symbolic the injury was in regards to the larger situation: the disproportionality of the force that the police used, in a circumstance where people were protesting exactly that. For instance, the situation in which I was shot was leaps and bounds more safe to the general public than what I saw happen at the Capitol last week.

When Trump started pushing all these buttons by claiming the election was fraudulent, it became pretty obvious something was going to happen. I arrived at Capitol Hill early in the morning, and started to walk towards the Ellipse where Trump was speaking when I ran into a pretty big group of Proud Boys. Being in this long enough, you come to learn what the potential of a situation is, and who are going to be the actors: big, brawny white men are usually a safe bet.

Police officer takes a selfie with a domestic terrorist after breaking into a government building. Whiteness is a hell of a shield. pic.twitter.com/UwcqpsjiAw

Trump finished his speech and people started moving after he sent them to the Capitol. The group of Proud Boys  started a sort of little micro march. I’m following, figuring out what I’m going to do, when I hear these yells: ‘Storm the Capitol!’ I turn and a group of them are throwing the fences up and running up the hill. There were four or five patrol officers who came down and tried to hold them back, but they pulled the fence, pulled one of the cops over, and the cops realised, ‘There’s no way we’re going to hold these guys back.’ At this point, I was like, ‘Holy shit, there are no cops here.’

There was no logic, especially when you compare it to other ‘protests’. There was no riot police, no backup, no nothing. People were screaming crazy shit: ‘We’re in 1776! If we don’t take the capital our children are going to be in breadlines!’ The cops kept retreating, and the crowd got even more motivated. I was watching them fall back and it was indicative that they have no fucking experience. The training they receive is basic and it’s wholly dependent on the use of less lethal weapons, but fundamentally, they are scared shitless of killing white folk. It sounds cliche and reduced, but that’s what it is. If it was any other group, they would have pulled their sidearms. It wasn’t shocking to me. It’s what I expected.

After all, this was not some random disconnected thing. This is the progression of social movements – as they’ve gone from far extremist margins to finding legitimacy in the presidency; finding an enemy in Black Lives Matter, in Antifa. You could have seen this coming. If we flirt with these far right political movements, if we give them space in the name of free speech, eventually you can take a country to fucking civil war. From the moment this protest started, it was obvious that police had just not prepared.

Looking back now, it’s interesting, in some ways, I think my photography has changed after I was shot. In situations that are fast-moving, I’m much slower than I was before, which I think makes my photography much more pensive in those instances.  There are 24 people that have lost eyes or been partially blinded as a result of the protests around George Floyd. I have been in touch with all of them, and my injuries are the least severe among the group.

I got my PTSD obviously, and this has been a life-changing experience. But all things considered, I feel pretty good. I feel like I’ve been able to leverage this in a certain way to make it not just a trauma. I think that, especially compared to people who have been through similar things, I’ve been incredibly fortunate in that sense.

(As told to Niall Flynn)

Linkedin
RELATED ARTICLES
OTHER ARTICLES
Photographer Arthur Grace recalls travelling through the Soviet Bloc and finding ways to evade the surveillance of his work.
A new edition of a seminal book brings together iconic images of the band onstage in their full glory and backstage in moments of unguarded camaraderie.
In the wake of the decision by the supreme court to overturn Roe v Wade, thousands of protestors filled the streets to express their rage and anguish.
The last few years have seen an increase in LGBTQ-led initiatives to feed the hungry, with many finding ways to stay afloat despite the challenges.
Proposals to introduce a minimum GCSE threshold for student loans will disproportionately affect those from marginalised backgrounds.
Wealth inequality and the rising cost of socialising is placing a strain on people’s relationships, reports Eve Upton-Clark.