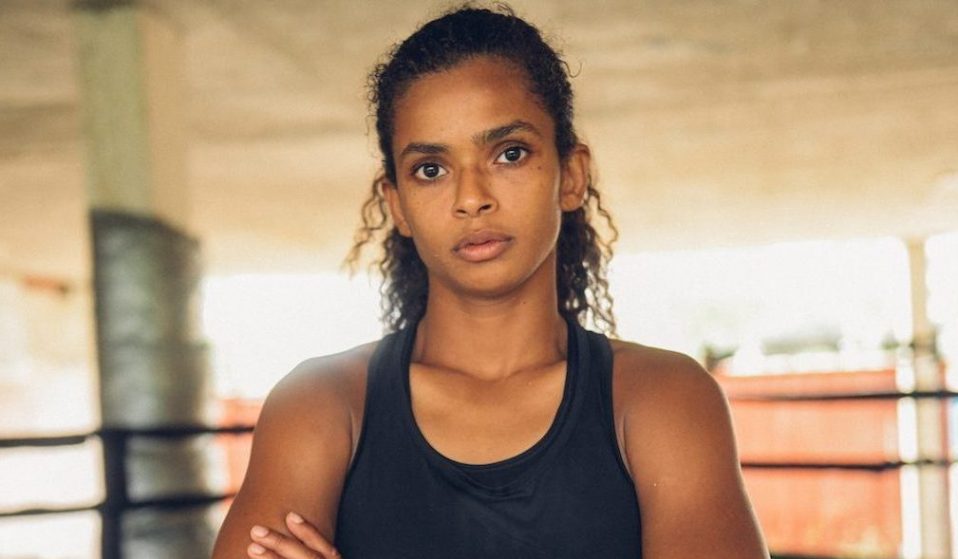 Amid the release of her new book, the former refugee turned boxer, model, humanitarian and now author reflects on the turbulent journey that has shaped her remarkable rise.

It’s been almost two month since Ramla Ali entered the ring as the first ever female boxer to represent Somalia in the Tokyo Olympic Games and she is still, understandably, frustrated. “It cemented my name in history, and no one can take that away from me,” she says, speaking to Huck over the phone. “But I didn’t feel like I was going into it fully prepared.”

Ali was only notified five-weeks before the games that she’d be competing. It meant little time to prepare, particularly alongside Ali’s busy modelling career, which funds her boxing. “You’re competing against these full-time athletes, who have all these amazing staff with them,” she explains, “I couldn’t take my physios and my osteos with me, it was just me and my husband [Richard Moore], who is also my coach.”

Her time at the games ended in a unanimous decision defeat to Claudia Nechita of Romania. But, despite all this, Ali is determined to keep her head held high: “I got to the Olympics all on my own, with no funding,” she says (Team GB, by comparison, are provided with financial support), “and that’s something to be really proud of, because I feel like not a lot of people could do that.”

It’s far from the only thing Ali has to be proud of: in 2015, she became the first Muslim woman to win an English boxing title. By 2019, she was the African Zone Featherweight Champion, in the process, becoming the first boxer – male or female – in history to win an international gold medal while representing Somalia. On top of this, she holds a first-class law degree from SOAS, has modelled for a slew of major fashion brands, graced the cover of British Vogue in 2019, and is an ambassador for UNICEF.

And, this week, she is celebrating the release of her first book, Not Without a Fight: 10 Steps to Become Your Own Champion. The memoir, published by Stormzy’s #Merky Books, sees Ali charting the ten key fights that have brought her to where she is today: a gold medalist, humanitarian, model, and now author. 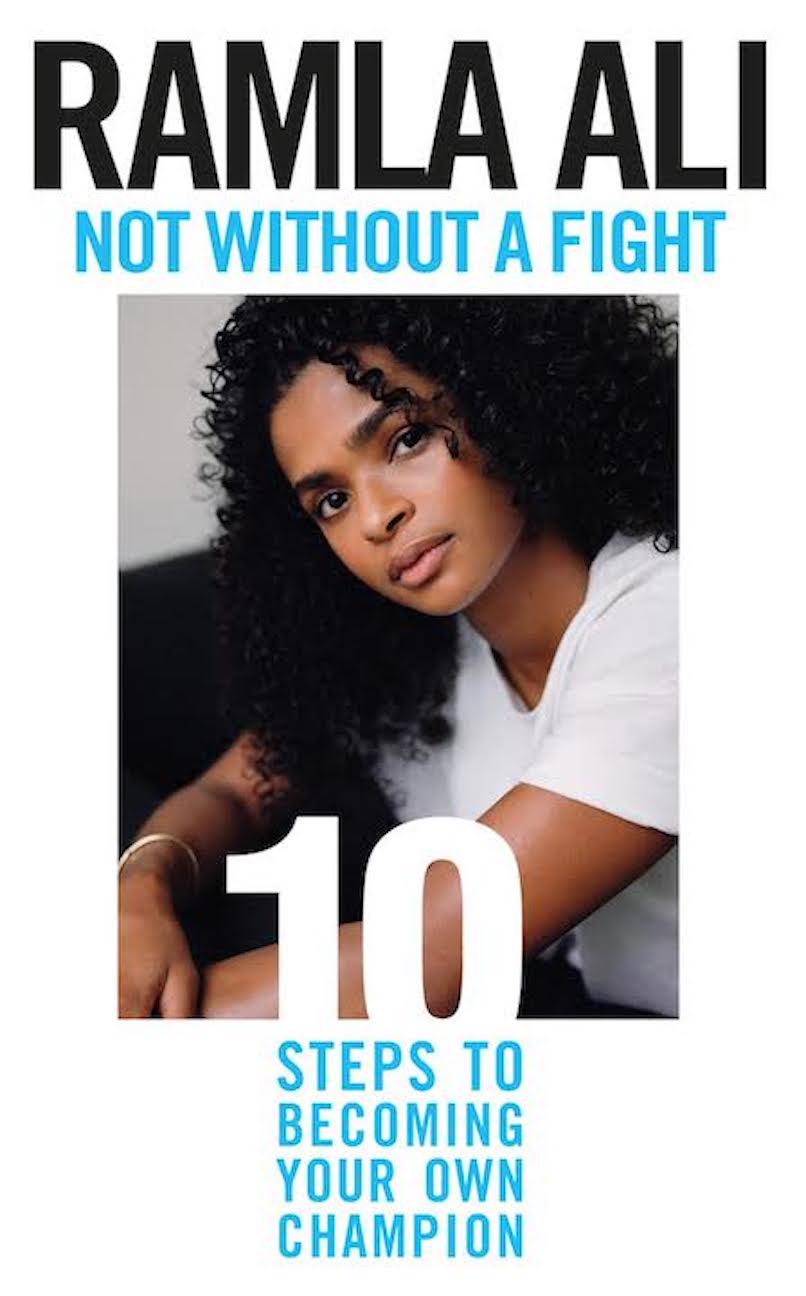 Cover of Not Without a Fight

Defying the odds is a recurring theme in Ali’s remarkable rise. When she was just a toddler, Ali’s brother, then age 12, was killed by mortar while playing outside during the Somali Civil War. Her family – mother, father and five remaining siblings – made the decision to flee to Kenya, boarding an overcrowded boat which saw some of their fellow passengers die of starvation.

From there, Ali and her family travelled to Dubai, and then the UK, eventually settling in Whitechapel, East London. Ali was too young to remember her time in Somalia and the perilous journey her family undertook to reach the UK (although due to the chaos of war, how young remains uncertain: Ali has estimated she’s between 29 and 31). In fact, it wasn’t until her marriage to Moore in her mid-20s that she began to learn about what had happened to her family.

At school, Ali was bullied for her weight, which eventually led her to take up boxing at a local gym. “I remember anytime I walked through those doors at the gym, it was like all my problems were forgotten; all the stresses at home and school,” she remembers. “I could feel boxing was helping me gain so much self-confidence… I was no longer unhealthy, I was changing both mentally and physically.”

For a while, Ali kept her boxing a secret from her parents. When they eventually found out, they forbade her from playing. As Ali recalls, they were fiercely protective of her and her siblings: “We were never allowed to walk around, my dad would always come pick us up from school… My mum was always so fearful of losing another child that she was just cautious with everything that we did.” After a fraught period of sneaking around and hiding her bruises from her parents, eventually, Ali’s uncle managed to convince them to let her play.

What advice would she give to people who find themselves prevented from doing the thing they love? “You only have one life, you shouldn’t let that life be dictated by other people’s insecurities,” she responds. “I’m not saying this is what my mum did, but most people want to try to fit you into this box… If something makes you happy, you should just go out and do it.”

Now, Ali counts her mother as one of her biggest supporters, and she is bursting with admiration for her. “Learning about my past, where I grew up, what happened, just gave me this huge sense of respect towards my mum. And the fact that she’s been through all these things, but she’s never complained once about any of it… It also gave me this amazing sense of pride towards my country.”

The way politicians and the press whip-up fear around refugees is something that angers Ali: “Being a refugee is written about so, so negatively in the media, like saying they ‘scrounge’ off the government,” she says, clearly exasperated. “My dad, for example, is a very educated man. He didn’t come to this country for £120 a week. He got a job at a building site, and he did it to provide for us… People who are making this horrendous journey are doing it for safety, more than anything.”

The pride and connection Ali feels towards Somalia is something which has deepened over time. When Ali first signed up to compete for Somalia, she admits it was for “purely selfish” reasons. “I wanted to compete all over the world and I knew that being from Somalia would give me that opportunity.”

It wasn’t until she started receiving an outpouring of messages of support from Somalis all over the world expressing their pride and admiration that Ali’s perspective changed. “I realised that this thing I was trying to do was so much bigger than me,” she says, “I couldn’t be selfish anymore… I’m trying to show young girls that I can come from where you come from, and I can do it, so you can, too. ”

Ali’s determination to give other women the chance to box led her to establish Sisters’ Club – a female-only self-defence class. “I wanted to give women of religious and ethnic minorities a safe space to train, because I feel like these groups of women find it really hard to get access to sport,” she explains. Over time, Ali says she has encouraged women of all backgrounds to join, particularly those who have been victims of domestic violence and abuse. “Only a few months in, and some of the women were telling me how they now feel safe walking home alone at night.”

With boxing demanding so much of her energy and attention, it is perhaps a wonder that Ali is able to sustain a successful modelling career alongside of it all. “Sometimes, modelling and boxing compete with one another,” Ali admits. She recalls a recent incident, where she had to show up for a shoot with a gaping cut under her left eye – an injury she just sustained from a match (thankfully, the team behind the shoot were hugely forgiving, Ali says).

Modelling is still a means to pay for the boxing: two days before the Tokyo Olympics, Ali was on a 12-hour shift so she could fund her flight out there. But when asked if she would ever give the modelling up should the boxing start to pay for itself, she insists that she would not. “It’s just given me so many amazing opportunities,” she says.

Despite her stunning list of achievements, which are set to be chronicled in an upcoming film about her life, Ali remains incredibly self-aware and gracious – something which masks her unrelenting determination. What is Ali, a woman who has already accomplished so much, striving for next? “Apologies in advance, because this is going to sound really vain,” she responds, laughing. “But I want my face to be everywhere, and to just be sick of it. It puts all the hard work right there in front of you.”

Not Without a Fight is available now on Merky Books and Penguin Random House.

Linkedin
RELATED ARTICLES
OTHER ARTICLES
A group of young Palestinians have found temporary freedom in the act of parkour, reimagining wreckage and ruins as a series of high-octane playgrounds.
Birdy Chu reflects on documenting the historic moment in which the territory was formally passed back from the UK to China.
Following the announcement of an 80% hike in the energy price cap from 1st October, crowds gathered outside the offices of energy regulator Ofgem to protest and declare their intention to undertake a payment strike.
Yesterday thousands gathered outside Buckingham Palace after news of the Queen’s death broke.
A 37-year-old woman shares how her abortion led her to become a clinic worker, and the abuse she’s received in that role.
The two-day long event returned to London this year, showcasing a spectacular parade, steel bands and Caribbean food.