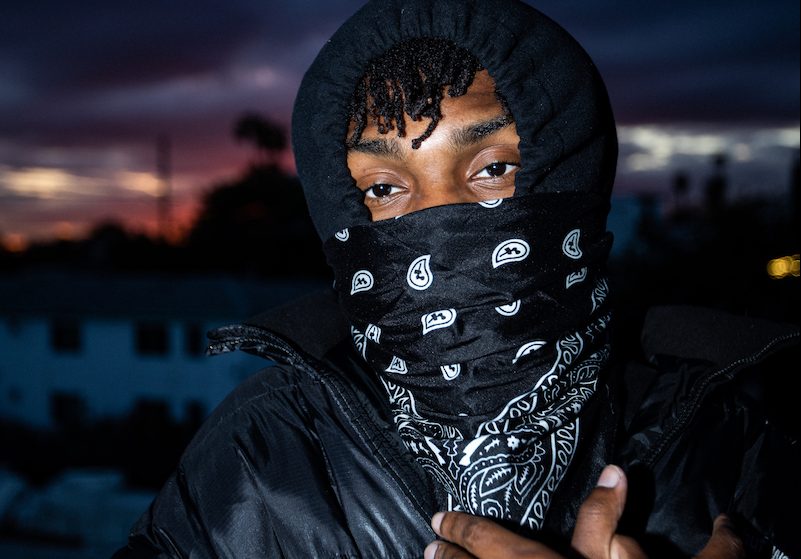 After releasing two albums last year, the 23-year-old artist is already a cult favourite among underground rap fans. Now, he’s ready to take his genre-blurring sound and transgressive lyrics to the next level.

After releasing two albums last year, the 23-year-old artist is already a cult favourite among underground rap fans. Now, he’s ready to take his genre-blurring sound and transgressive lyrics to the next level.

“Young people today go through so much shit and bottle a lot of things up, because no one really cares how they feel,” says $NOT over the phone from somewhere in Florida. “My music is about helping them express themselves more clearly. That’s what artists like XXXTentacion, Bones, SpaceGhostPurpp, and Yung Lean did for me [when I was growing up].”

With their futures threatened by irreversible climate change and their formative social experiences upended by endless cycles of lockdown, there’s no denying that young people have it tough right now. The need for an artist who can channel this angst – while also providing an escape from it – feels especially important. $NOT feels like that kind of artist.

Rapping in an addictive, slightly disinterested murmur over anarchic trap concoctions, the 23-year-old’s songs are driven by a need to make sense of his anxiety (“What do you know about loneliness? Up for the day, but at night I’m down” he concedes on the wounded ‘STRANDED*’) and transform it into a towering self-confidence (“Ice water step / no hockey” is the boast that lights up the eccentric ‘Xanax Files’).

His unconventional approach to song structure feels totally unique, with consistently genre-blurring tracks that thrillingly shift between slurred anthemic singing (‘Moon and Stars’ is a real ‘lighters in the air’ moment) and blunt, highly quotable stoner boasts (“I might break a bone / call me fuckin’ Jeff Hardy”). The way $NOT channels trap, punk, pop, indie, emo, and chopped and screwed rap recalls the playful spontaneity of late artists like Juice WRLD and Lil Peep.

$NOT thinks young people, in particular, are drawn in by his confidence. “It isn’t so much about what I say, as it is giving people an energy to feed off of,” the artist says.

On breakthrough smash single ‘Gosha’ – a Billie Eilish-approved song that juxtaposes a gentle coo from your grandmother doing the dishes with a hyper-violent trap beat – $NOT spits the transgressive line: “Fuck school. I don’t really fuck with rules”. The song sounds like Drakeo the Ruler if he made music for punks rather than gangbangers, and is a rush of blood to the head whether it’s your first or 300th listen.

Already a cult favourite among young underground rap fans, $NOT has amassed more than six million monthly listeners on Spotify. The mysterious artist rarely shows his face, chilling behind a hoodie tied tighter to his cheeks than Kenny’s orange tracksuit on South Park. His refusal to play by the rules feels bold given how the music industry so often distorts Black identity. “The hoodie is like my brand, you know? People don’t know what I look like with it off. I like that feeling of freedom.”

Last year, $NOT released two bold records, TRAGEDY + and Beautiful Havoc, which were both a testament to his versatility, while an upcoming single featuring Lil Skies has a video directed by the popular Lyrical Lemonade director Cole Bennett, who seems to have a real knack for directing future rap legends (he shot Juice WRLD’s ‘Lucid Dreams’).

The Florida artist tells me he is part of a generation unafraid to push the line and say taboo things. “I will say some crazy shit like: “Smoking the Olympic torch like a blunt” [‘Havoc’], or maybe something someone else thinks is too dirty. Life isn’t that serious. I like to have fun.”

Has there ever been a bar that has crossed the line, though? “Yeah, yeah. There is one bar that is a cancel kind of bar,” $NOT laughs. “My bad, but look: I’m just trying to rhyme.”

He later adds: “I am not trying to be a fake ‘woke’ person. It’s all about keeping it real and just being yourself.”

I love how so much of your music is built around rejecting authority figures and trying not to let the school system throw young people off course. Why is it important that you speak out?

School can feel like this prison. It’s a simulation, but you realise as soon as you finish high school… ‘Where the fuck do I go now?’ There are so many kids who don’t know what to do as their school never really taught them shit about succeeding in the real world. Once you’re finished with high school, the world is suddenly on your head and time goes really fast, you feel me?

School wasn’t for me, at all. If you want to be a marine biologist or a doctor then go to school as there’s no backdoor for that shit. But if you want to do some [individualistic] shit that doesn’t require school, like rapping, then why the fuck are you even going?

Would you say rappers acted as your teachers?

Definitely. They inspired me. It was a lot of artists from Tyler the Creator and A$AP Mob to the underground scene and people like Yung Lean, Xavier Wolf, Denzel Curry and SpaceGhostPurpp. I like how they could all turn their pain and the darkness in their heads into these bangers that made people smile. Even someone like Travis Scott and how his parents gave him money for school, which he then invested into music: I learned more from that shit than anything at school! The studio was my school. 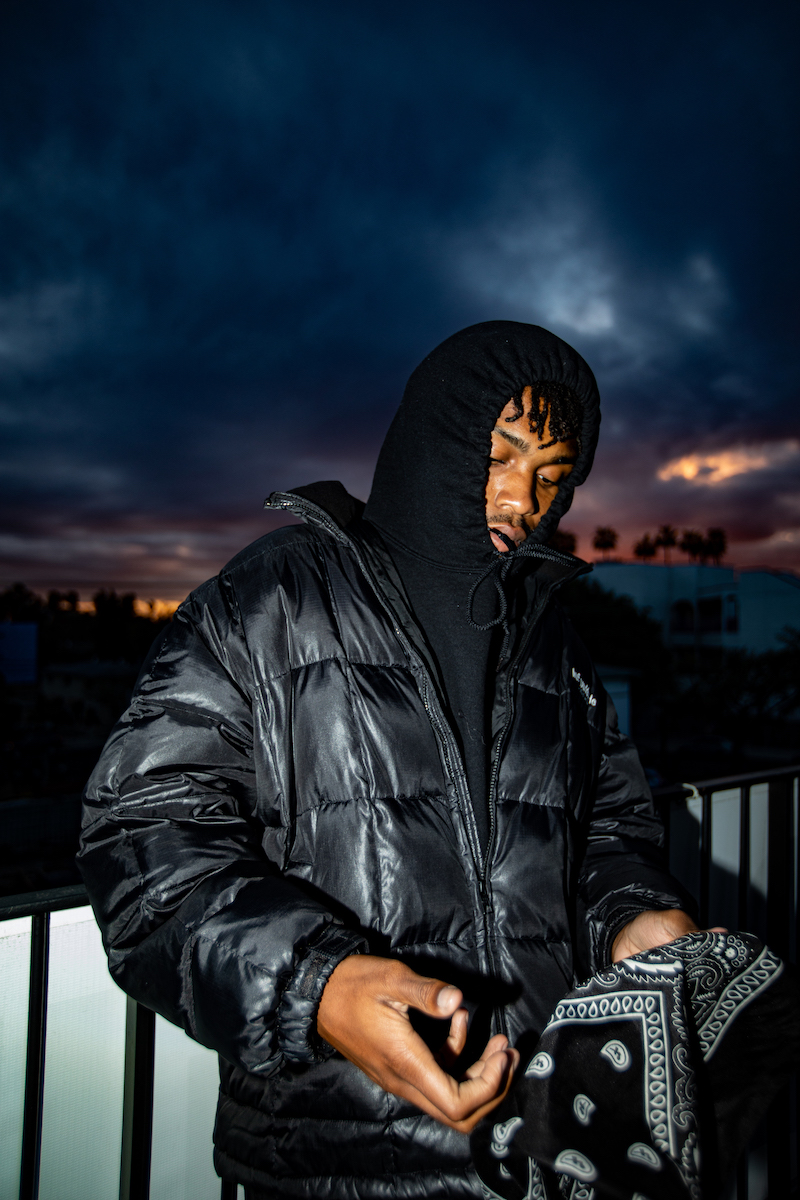 Florida seems to be this breeding ground for unique rap personalities. Why is that?

In Florida there’s street artists from X to Kodak Black, but then there’s the EDM shit in Miami. People like to experience new sounds. It is a real melting pot down here as we’re right next to the Carribean, which means there’s lots of artists from Haiti, the Dominican Republic, and Jamaica. As a result, we like to mix up our sounds and do a whole bunch of crazy, weird-ass shit. There could be something trending from Atlanta or LA on the radio, but once we put our little Florida spin on it, it will sound ten times better. Trust me.

What was it like growing up in Lake Worth? I know it has a reputation for having some of the highest crime levels in the state.

When I was young, I didn’t think about Lake Worth too much. I was in high school just living my life, and I just thought, hell, there’s bad parts and there’s good parts. There’s pluses and minuses. But when I got older, I’m like: ‘I gotta get the fuck out of here, type shit’ When I was young, I wanted to go to LA, as so many rappers went there. But you get older and then to go to LA, and it really isn’t what people said it was.

It feels like you have a reluctance towards fame. On ‘Gucci’ you spoke about keeping a small circle and only running with one or two people. Why is that approach so vital?

Always keep your circle small! You don’t want to be infiltrated with fake people. I don’t have to maintain a lifestyle. Nothing is that serious, for real. My whole approach to rapping is not trying to keep up with people I don’t know. Why do you care about the opinion of people who don’t even know you? I see no sense in trying to dress up and maintain or look cool for people who literally never talk to me.

Why is being independent so important?

Maybe some labels see young artists as a quick cash grab. They embrace a song on TikTok, but then cash out of that artist as soon as they blow up. You could wake up and be famous, literally overnight. You need a smart lawyer before sitting down with these labels, as all they see is an inexperienced 18 year old, whose money they can steal. You need to come wise into this industry. I’m independent as I want to be my own man. I like calling the shots for myself. 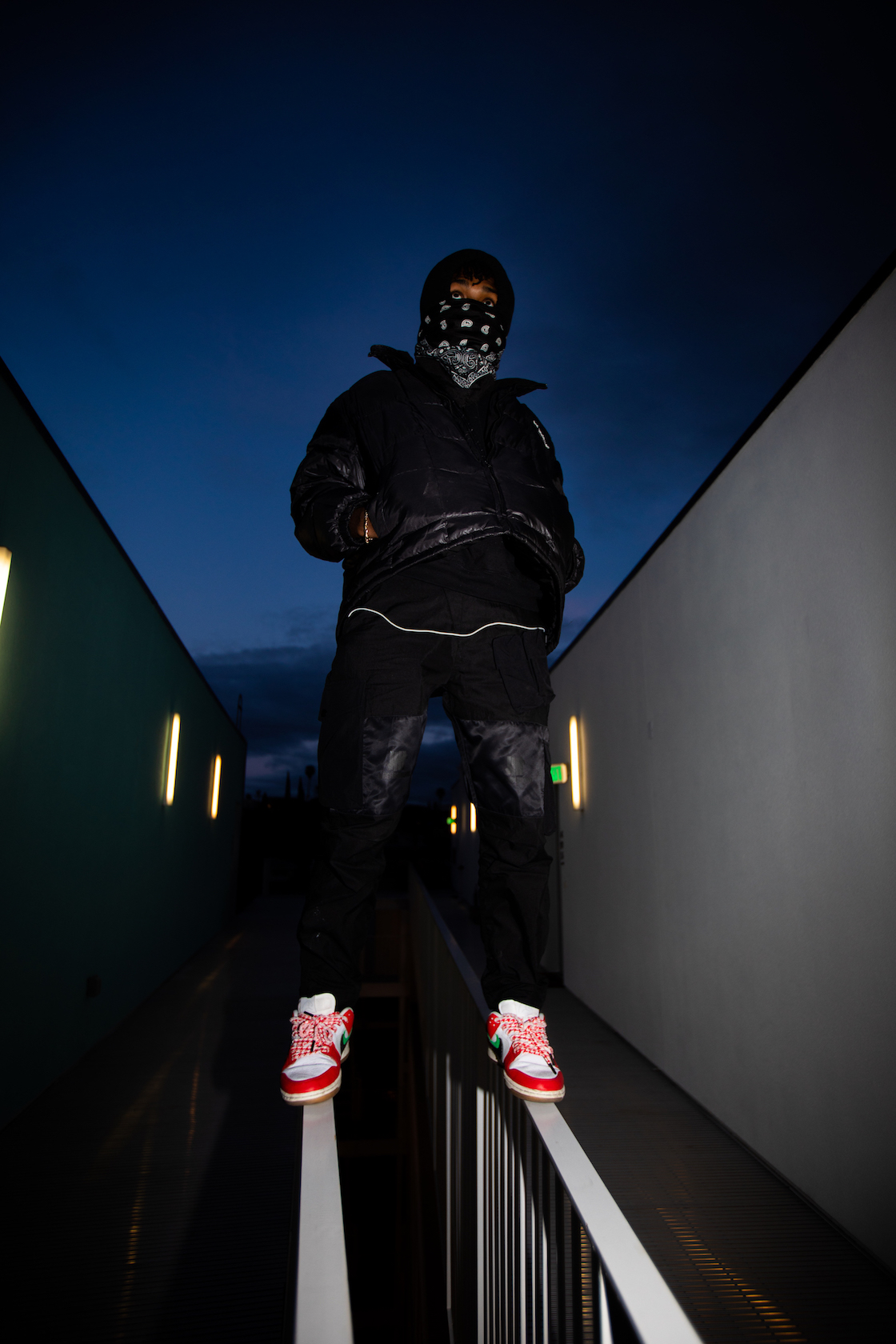 The lyric: “Laid back, always keep a tool” always really stuck with me because I think it shows just how dangerous being a young, successful black person in America is. You need eyes in the back of your head. Have you felt that danger?

Shit, you get paranoid. Plus you’re Black, so people look at you in a certain way. Plus you’re a celebrity, so there’s going to be a whole bunch of other bullshit. You could be chilling and someone could just run up in your backyard and go crazy and try to harm you.

If you are Black and they don’t know you, a cop could still shoot you for some bullshit. At the end of the day, everyone bleeds the same and looks the same. We are all fucking human. Some people just have a little more pennies in their pocket.

Maybe it’s that line on the brilliant ‘Stranded’, where you say: “Up for the days, but at night I’m down”, but I sense a lot of your music is designed to be played late at night. It feels like these are nocturnal confessions.

During the day, you are chill and with your friends. It gets lit. But at night, it is just you. It is bedtime but you cannot sleep so you are stuck in your head and sitting alone. There’s a million things in your head, so why not just make a song about them? That’s my whole approach. I’ve got kids who listen to me that don’t want to hear no big-ass words. So you’ve gotta keep it simple and tell them how you really feel.

You once said you wouldn’t stop until you made a billion, is that still the aim?

A bunch of money and awards would be nice, or maybe just starting a family. It is sad, bro. There’s a lot of rappers who cannot tell their story. They had babies, who they didn’t even get to see grow up. Their kids will be alive and grow old without knowing shit about their father. They will know the legacy, but they won’t know the true story. The idea of starting a family is so cool to me, though.

This interview has been condensed and edited for clarity.

Linkedin
RELATED ARTICLES
OTHER ARTICLES
Theo McInnes’s photos of the annual event provide an intriguing snapshot of contemporary Britain.
Since 2007, Gideon Mendel has made 20 trips to document floods in 13 countries. The result is an alarming record of what has already been lost to the climate emergency.
After blocking the Scottish government’s gender recognition reform bill, Westminster is now devising further changes to the law to make it harder for trans people to self-identify.
Photographer Sean Maung reflects on documenting a small town in Pennsylvania afflicted by high levels of unemployment, poverty, violence, crime, and addiction.
Activists and campaigners are fighting back against new laws that would seriously undermine the ability to take industrial action, calling it an attack on fundamental workers' rights.
At his West Bank restaurant, Fadi Kattan established himself as the voice of modern Palestinian cuisine. Now, he’s bringing his innovative, bold flavours to the UK’s capital.