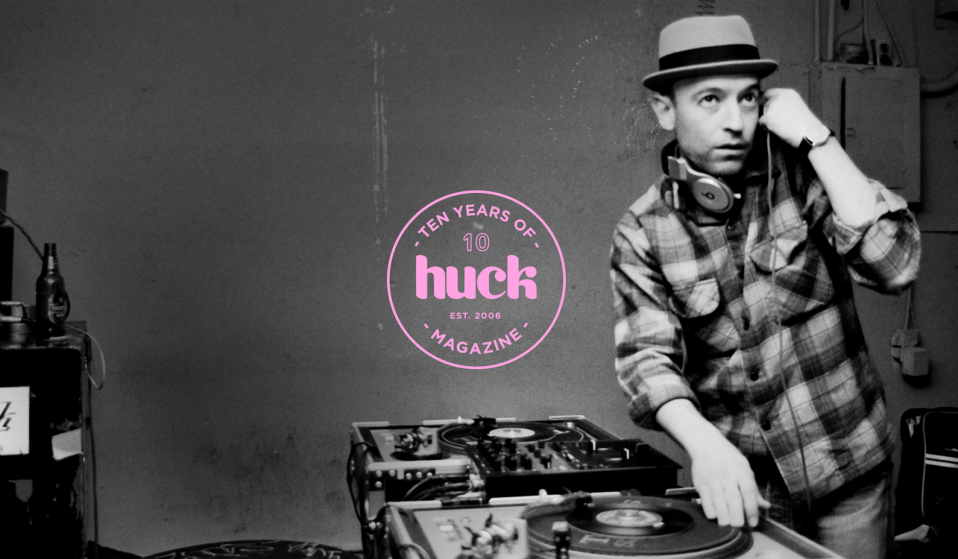 To celebrate 10 years of Huck, we're digging through the archives to unearth stories that feel as relevant as ever. As Stones Throw marks its own anniversary – 20 years as a trailblazing record label – founder Peanut Butter Wolf recounts the journey so far.

It’s been home to a roster of critically acclaimed artists including the late J Dilla, MF Doom, Madlib and Guilty Simpson.

But by building on hip hop’s fundamental eclecticism, the label has since reached far beyond through the likes of The Stepkids, Mayer Hawthorne and Aloe Blacc.

Twenty years on, Peanut Butter Wolf gives us a quick rundown on how the label has stayed afloat.

“I’ve always kinda surrounded myself with ‘music people’ since I was in high school. My friends were DJs, rappers, musicians. My first time flirting with the idea of being a DJ was in 1983 when I was 12. By around 1985-86, I was making my own beats for rappers and playing electric bass in bands.

“After getting signed and dropped by a major label and losing my 20-year-old friend and music collaborator Charizma, who was murdered in 1993, I eventually decided to start my own label in 1996. That’s kinda the short version.

“I just try to find things that sound as good as the best of my 100,000 or so records in my personal collection. As my taste in music got broader, so did the music I was putting out. But even in the ’80s, I was into a lot of different things: goth, punk, new wave, reggae, hip hop, soul, funk, electro, house.

“Sounds so ugly when you mention them all in one sentence. The only thing the artists have in common is that I believe in them and they believe in me. That’s it.

“The first ‘non-hip hop’ record was El Captain Funkaho in 1999, I think. The name was a take on E-40’s song ‘Captain Save A Hoe’, but it was basically a cross between Black Sabbath and the [early funk/hip hop] Jonzun Crew.

“Most people hated me for releasing it, like they do every time I release something new that strays too far from hip hop.

“My idea of success is cultural impact. Every time I see someone on a larger level doing something we were doing five years ago, it reminds me that we’re still on track. We make a lot of collectable merchandise. Every time we do that, we’re trying to have fun and do something different.

“Mayer Hawthorne wanted his record to be a red heart-shaped vinyl and I didn’t even really wanna do it because I thought it was too gimmicky, but we did it to keep Mayer happy and the public loved it.

“I have mixed feelings about the marketing thing, though. I got a degree in marketing and basically did the opposite of everything I learned in school.

“The main way [the music industry] has changed is that there are no record stores and nobody buys records anymore. Other than that, it’s the same. I probably wouldn’t start a record label if I knew the industry would eventually collapse.

“There was no record industry 100 years ago, so why should I have assumed it would last? Shoulda just been a psychologist.

Check out Stones Throw on their official site or Soundcloud.

This article originally appeared in Huck 36 – The Nas Issue. Subscribe today to make sure you never miss another issue. Linkedin
OTHER ARTICLES
A new law change is enabling Britain’s donor-conceived children to know the truth about their origins – but campaigners say the fertility industry must do more to protect people.
At his West Bank restaurant, Fadi Kattan established himself as the voice of modern Palestinian cuisine. Now, he’s bringing his innovative, bold flavours to the UK’s capital.
Theo McInnes’s photos of the annual event provide an intriguing snapshot of contemporary Britain.
After building his reputation covering the US civil rights movement in the 1960s, the photographer went on to produce some of the most enduring images of the past century.
Filmmaker Laura Poitras discusses her new documentary which traces the remarkable life of the artist-activist and the impact of her battle against the US opioid crisis.
A recent High Court ruling against the right to wild camp in Dartmoor National Park sparked the largest land protest in history – and campaigners say their fight is not over yet.